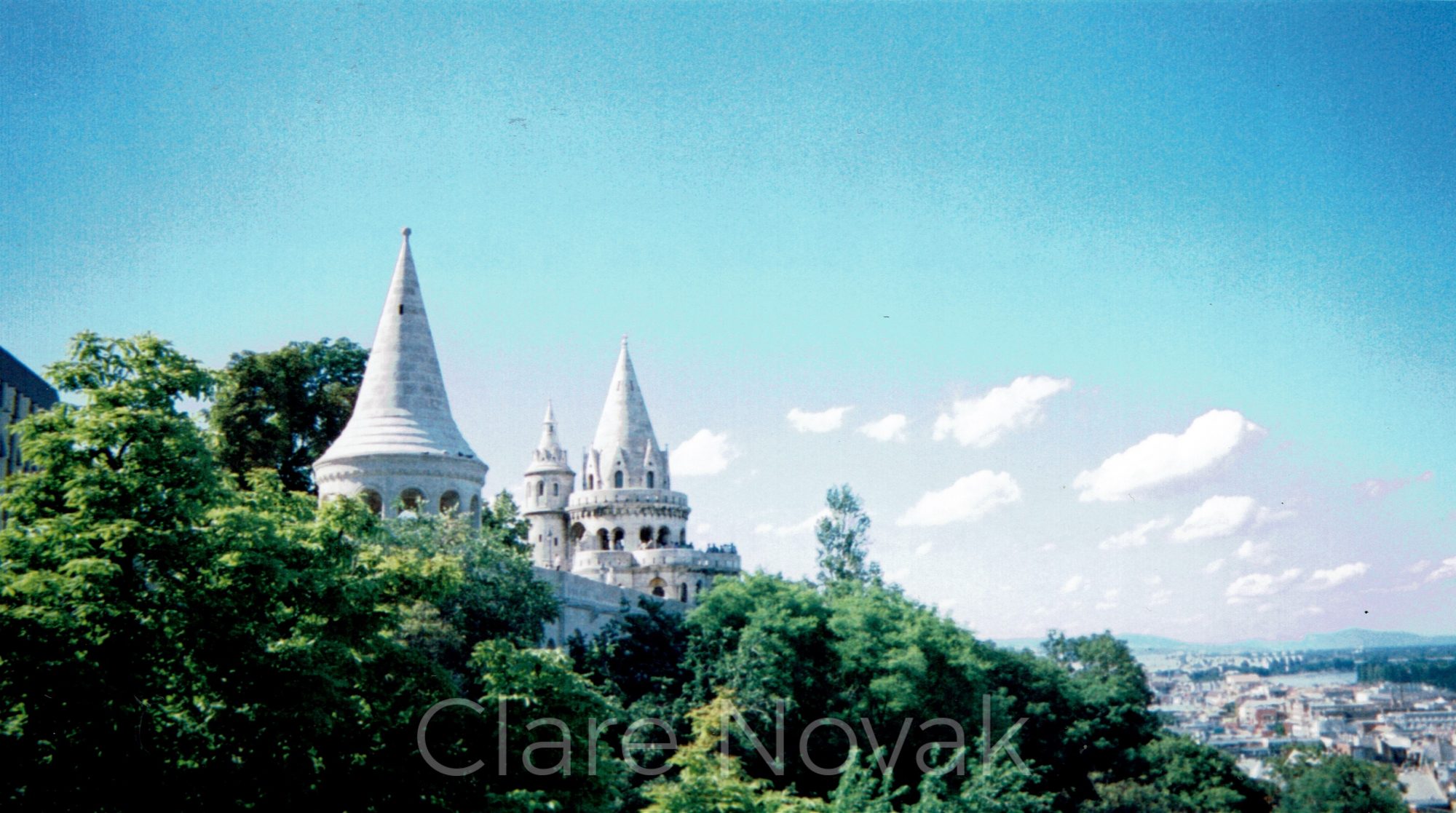 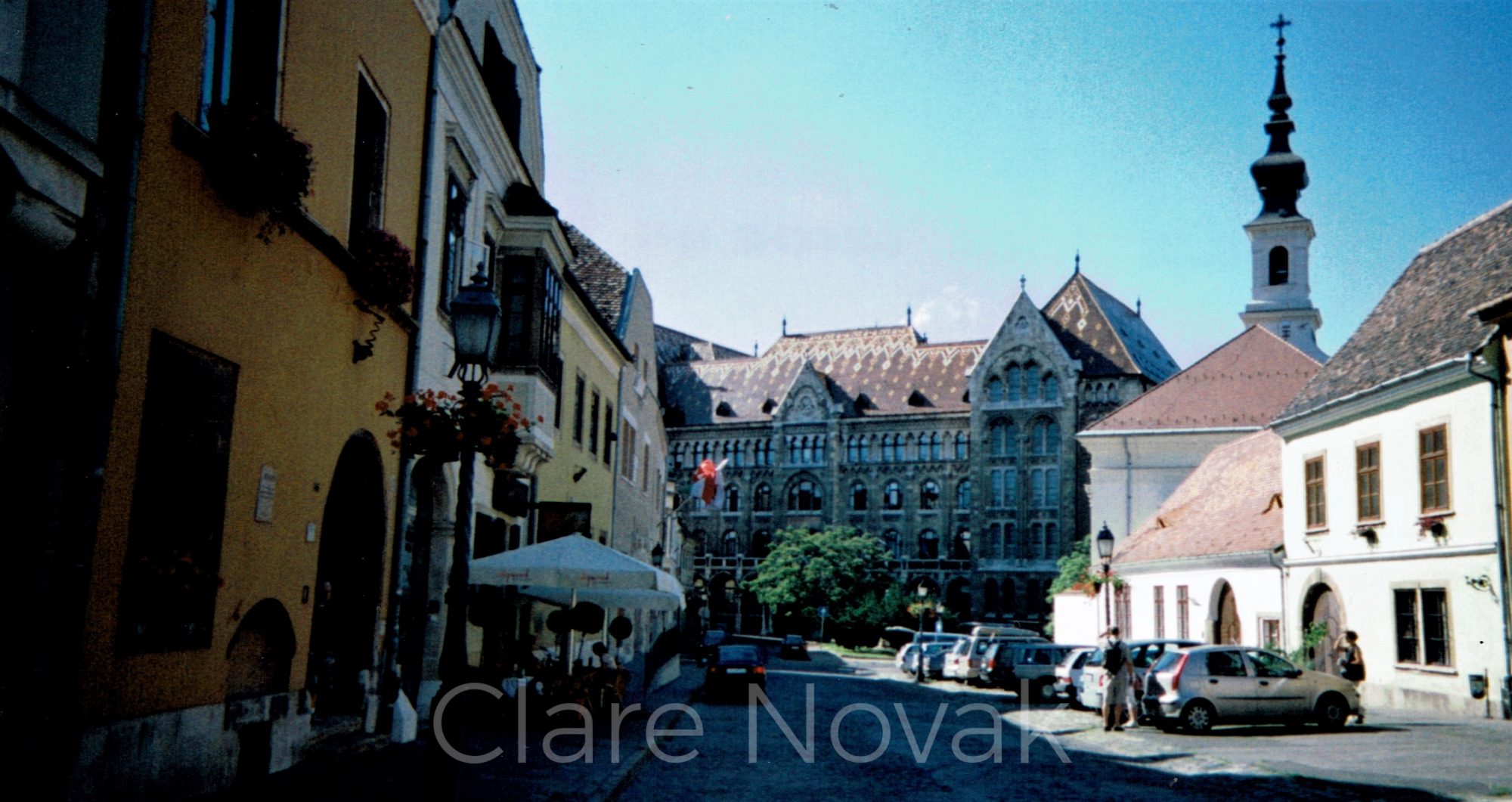 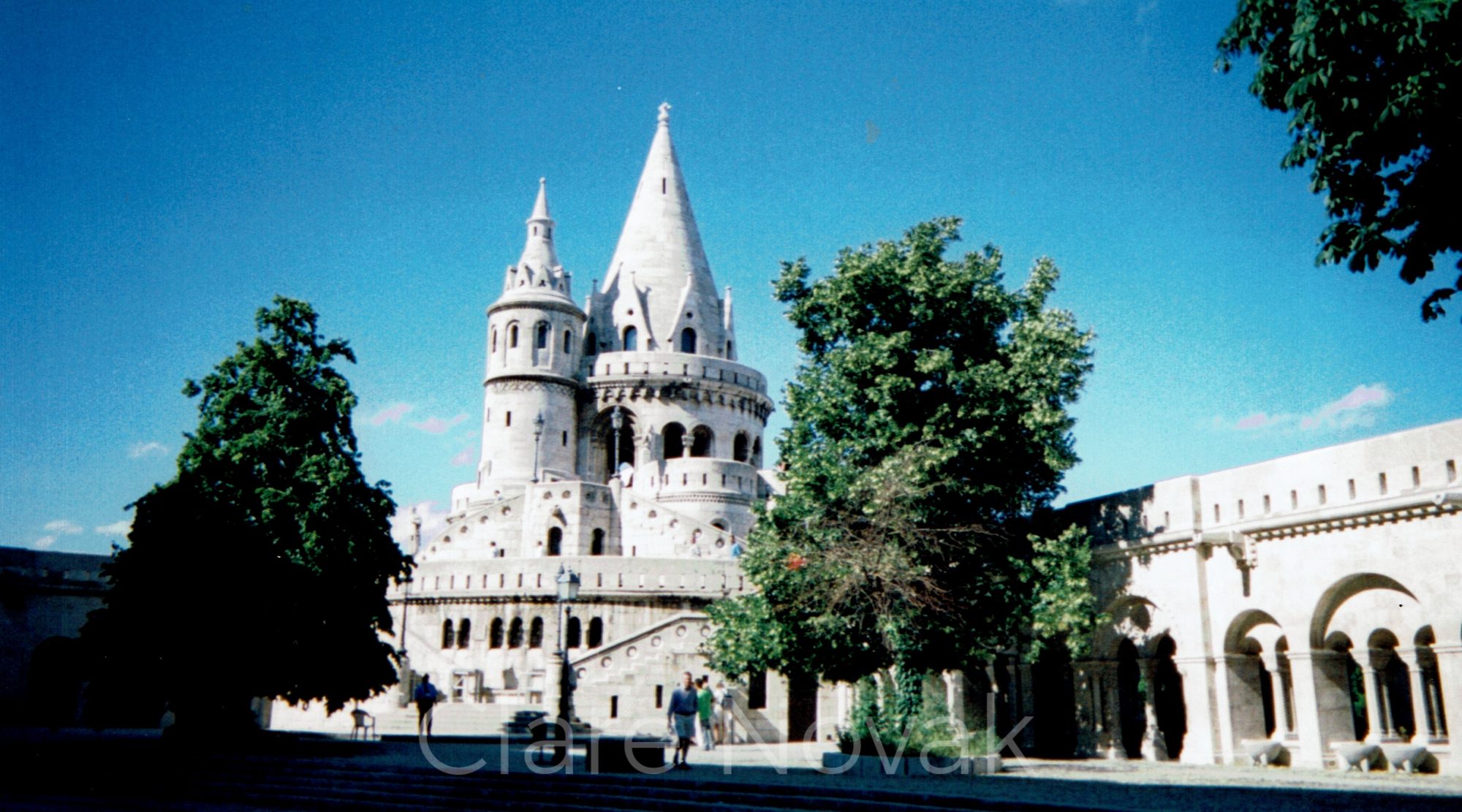 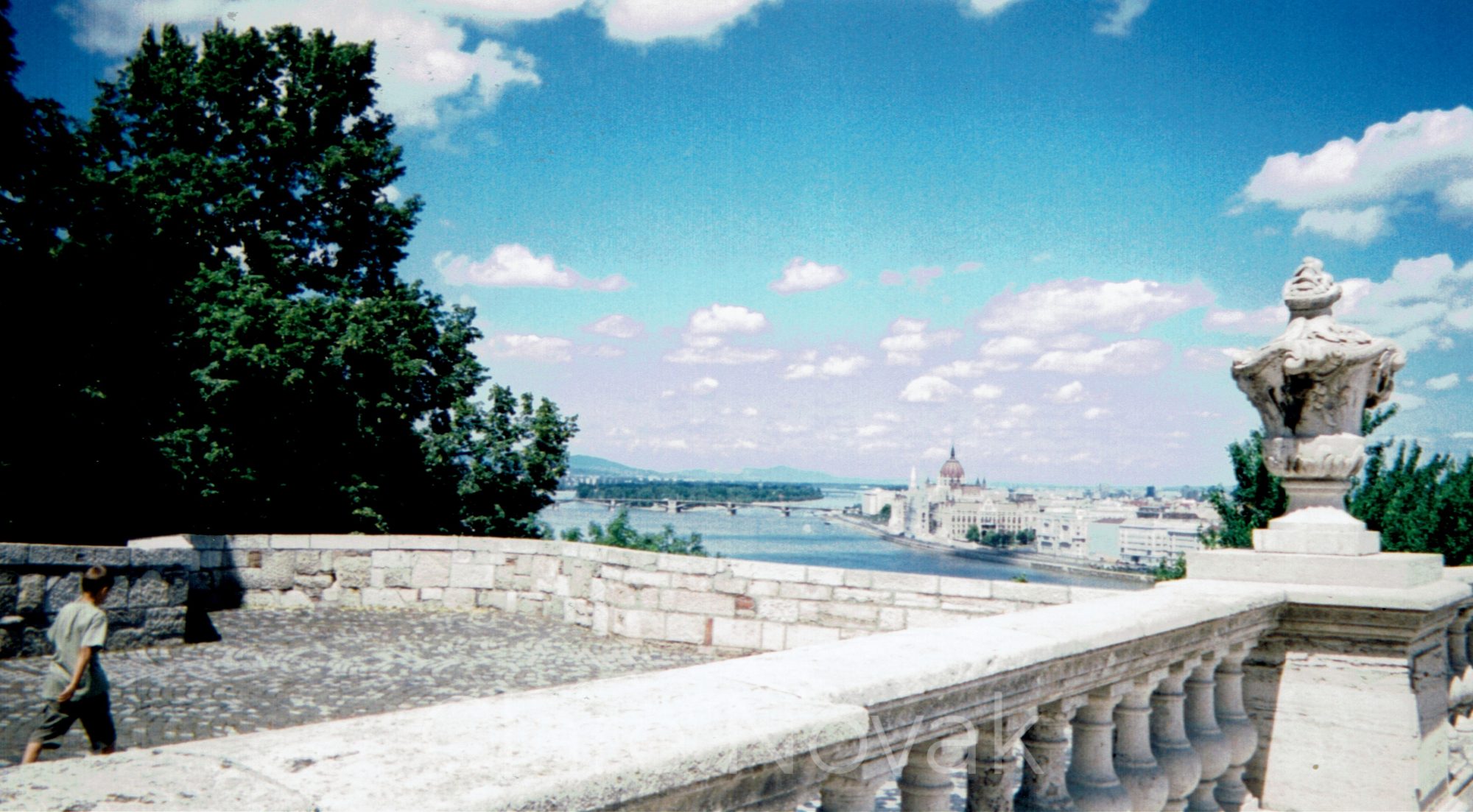 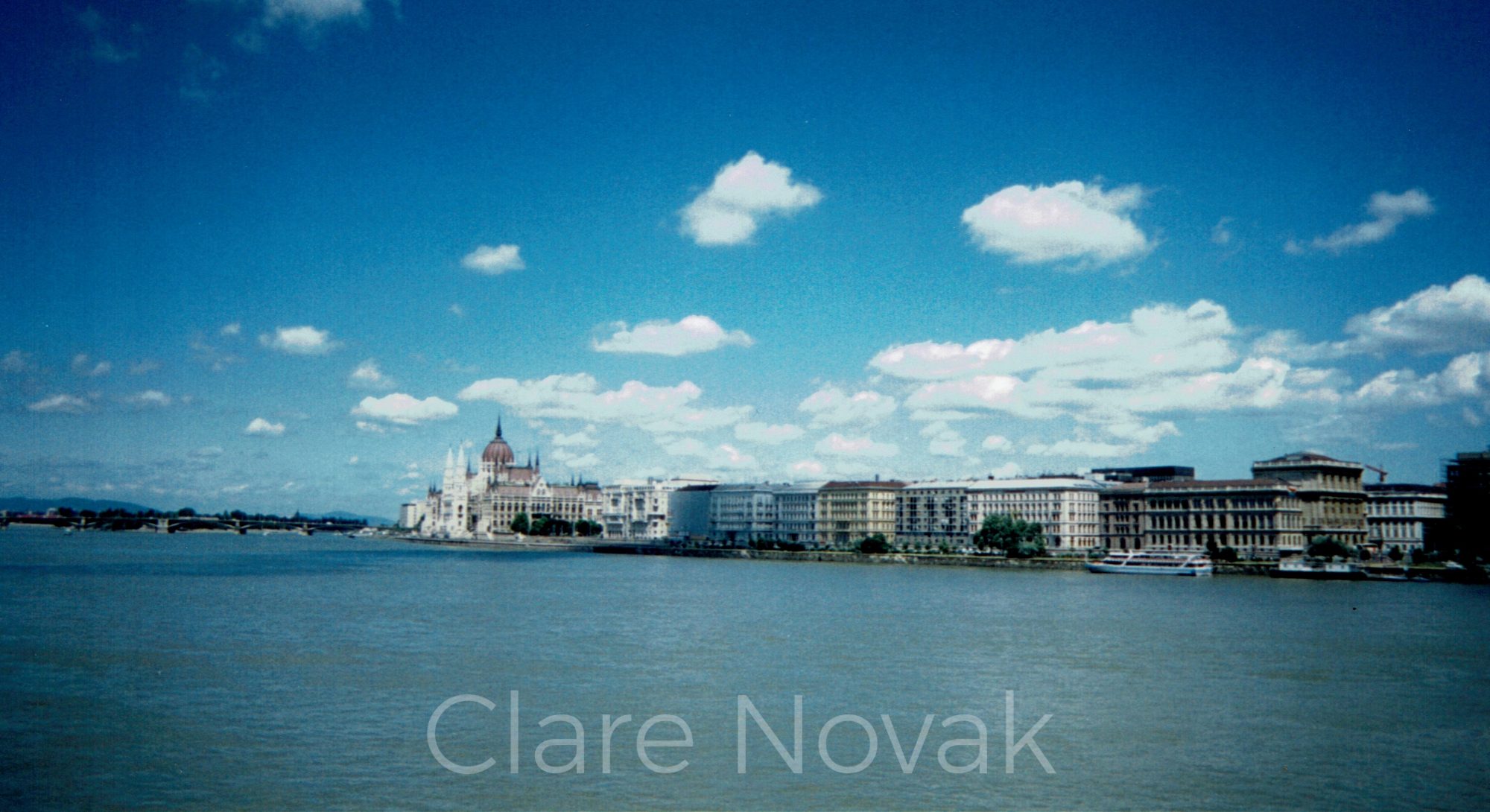 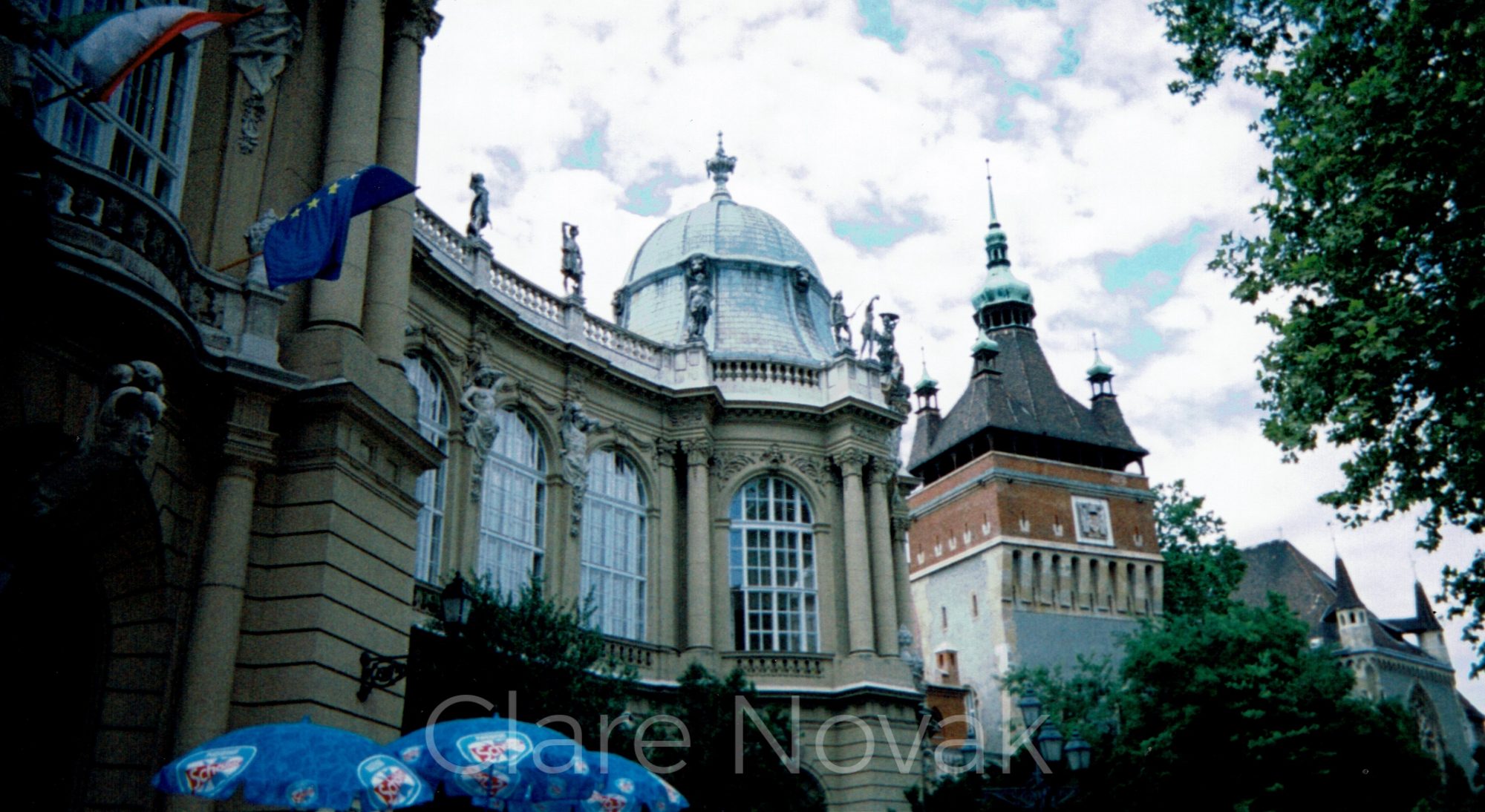 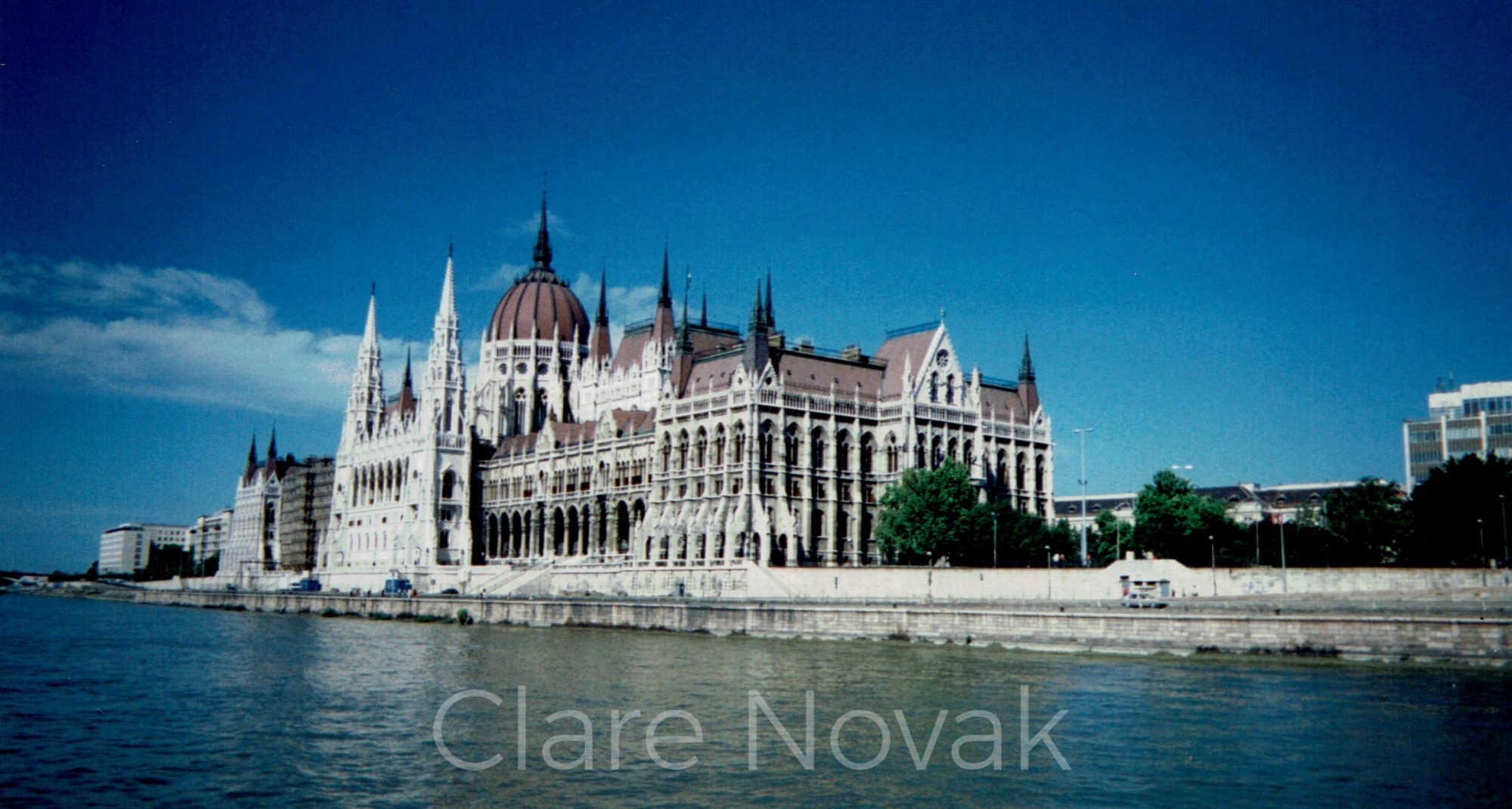 The sign at the airport lets you know where you stand in Hungary. “Assengers will sit here and wait for the minibus.” It’s difficult to judge whether “assengers” is judgment or wry humor. Hungary has both.

Budapest is Prague’s twin sister, but the one who smoked too much, drank too much and lived a little too hard. She has parks, but the grass is gone to seed; she has marvelous palaces, but the façades are blackened with grime; she has die Blaue Donau but it’s muddy brown. She greets her tourists with a cold drizzle in July as if to warn them not to set their expectations too high. Then, after lowering your expectations, and only then, does she open the doors to treasure.

In the cold drizzle, the only sensible option is a bus tour including a visit inside the parliament building. The guide easily flipped between German and English with the effect of having duplicate reactions a moment apart. On the Buda side at Heroes Square, after naming and explaining the kings, she pointed out the scaffolding around two statues. “We are cleaning the statues. The French are cleaning theirs and now it is fashionable to clean. Before, the patina was considered high class and fashionable, se le vie.”

The large park nearby once held a large statue of Stalin that was dismembered after the fall of communism and “Thank God, no one has thought to reconstruct it.”  The Communist Headquarters is now a parking lot; “a much better use of the land.”

Buda is flat and Pest is not, therefore Pest is the site of the military fortifications and palaces. While standing at St. Matthias Cathedral, the crown jewel of the hill, the guide pointed out the statue of a naked man. With the same factual voice through which history was conveyed, she said “This statue is thought to symbolize the state of our economy.” The state of Hungary, tongue in cheek resignation

Parliament was the last stop of the tour. The exterior is a Gothic cake work castle; the interior is a parquet of Carpathian marble complemented with stained glass windows and carved wooden pediments. Everything about the interior conveys the grandeur and the gravity of the rule of law—a hall for each house, blue for the nobles and red for the commoners. The grandeur creates a respectful hush among the tourist class.

Across from Parliament is the Ethnographic Museum, designed by the architect who came in second in the contest to design the Parliament. It was here that I came home. The costumes, the picture, the explanations, echoed the traditions of my family. My grandparents kept “best rooms” and Baba saw that the girls could sew and roll a thin noodle. These skills were basis of daily life for Hungarian women.

In a small hall were contemporary photos that complemented the historic ones. Two old ladies in one photo stopped me in my track. One was surely a twin to my aunt Mary, the other my Baba—small, sharp, tough and in charge. I cried from missing her.

After the day of rain and indoor musings the following day’s sunshine proved the perfect complement to taking on the shopping challenge. The Big Market Hall beckoned. The first level was packed with people buying produce, meat, cheese and pastry. Who was I not to join them? After a pastry stuffed with about an inch of honeyed poppy seed, I was glad not to work for a ponderous, drug-testing US company. With that much poppy, I will probably set of alarm bells all over the airport—not to mention Liberty the drug sniffing beagle.

The upstairs was wall to wall craft items which I attacked with gusto. Embroidered and beaded work went wall to wall and corner to corner. An hour and a half later and much poorer I hauled off my bounty dumped it at the hotel and headed for Pest. It’s a beautiful walk across the chain bridge, the first suspension bridge in Europe, to the funicular. A pack of drunk lads and I piled into the funicular and rode up the hill to the castle. A huge complex of halls; it houses two museums, contemporary art and history.

In the art museum, I decided to start at the top and work my way down, so that if the Baroque works consisted entirely of chubby cupids, I could make a run for the door. The best works were Hungarian portraiture of the mid-1800s. Unlike American portraiture, with the possible exception of Singer-Sergeant, these works showed emotion, expression, vibrance, and uniqueness, in short, they had personalities. The women, in particular, were alive and very much themselves.

At the opposite end of the palace, the history museum held court. The prime virtue of this museum was the basement; for it was there that the original architecture and vaulted rooms could be viewed. No tourists, other than myself ventured down there and so, far underground, the silence was profound.

As St. Matthias is a crown to the hill, the Mendelssohn Chamber Orchestra provided the crown to the day. They perform to an audience of perhaps one hundred in a small courtyard located between the Hilton and the ruins of an ancient nunnery. The remnants of flying buttresses ended at the night sky while providing an acoustic backdrop. Behind the orchestra was a circular overlook of the Danube. The music and the setting complemented the perfectly clear evening.

Sunday proved as perfect a day as Saturday and so I took the metro to Heroes Square to tour two more art museums. The architecture in the first outshone the collection. Having visited art museums throughout Europe, America and Egypt, I’ve decided that art curators could do future generations a great service by expurgating the following from all collections:

1.      curly-haired, chubby cherubs all of them including those masquerading as the baby Jesus

2.      Every picture of dead fish. We all know that any dead fish around long enough to have its portrait painted is covered with flies and stinks.

3.      All picture of otherwise sensible women who become so overwrought by famine, flood and conflagration that they suddenly decide to bare a breast and have their portrait painted.

4.      All pictures and statues with women and two baby boys, one infant greedily grabbing for a breast and the other standing on her lap pulling on her hair called “mother love.” Short of removing them, they should be honestly labeled “mother frustration.”

5.      Martyrs, the epitome of which is Spinzotti’s pieta. A saint has a cleaver embedded four inches in his skull and a sword in his shoulder, running down through his chest. Saint or not, the cleaver alone should have had him on his knees.

Cafés the Crowning Glory of Europe

In summer, there are outdoor cafes in every square, in every park, along every stretch of water and the food is almost universally wonderful and the beer and wine, cheap. In Hungary the specialties included roast goose, veal in paprika sauce and lesko with kielbasa, the last being a ragout of yellow peppers, tomatoes, a spicy red sauce and kielbasa. Clogged arteries are a small price to pay for exquisite cheeses and smoked sausages.

A bit tired after two days of walking, a cruise on the Danube to Marguerite Island was a relaxing way to finish my time in Budapest. Except of course that there was a free jazz concert on Chain Bridge in the early evening that was the after-dinner dessert.