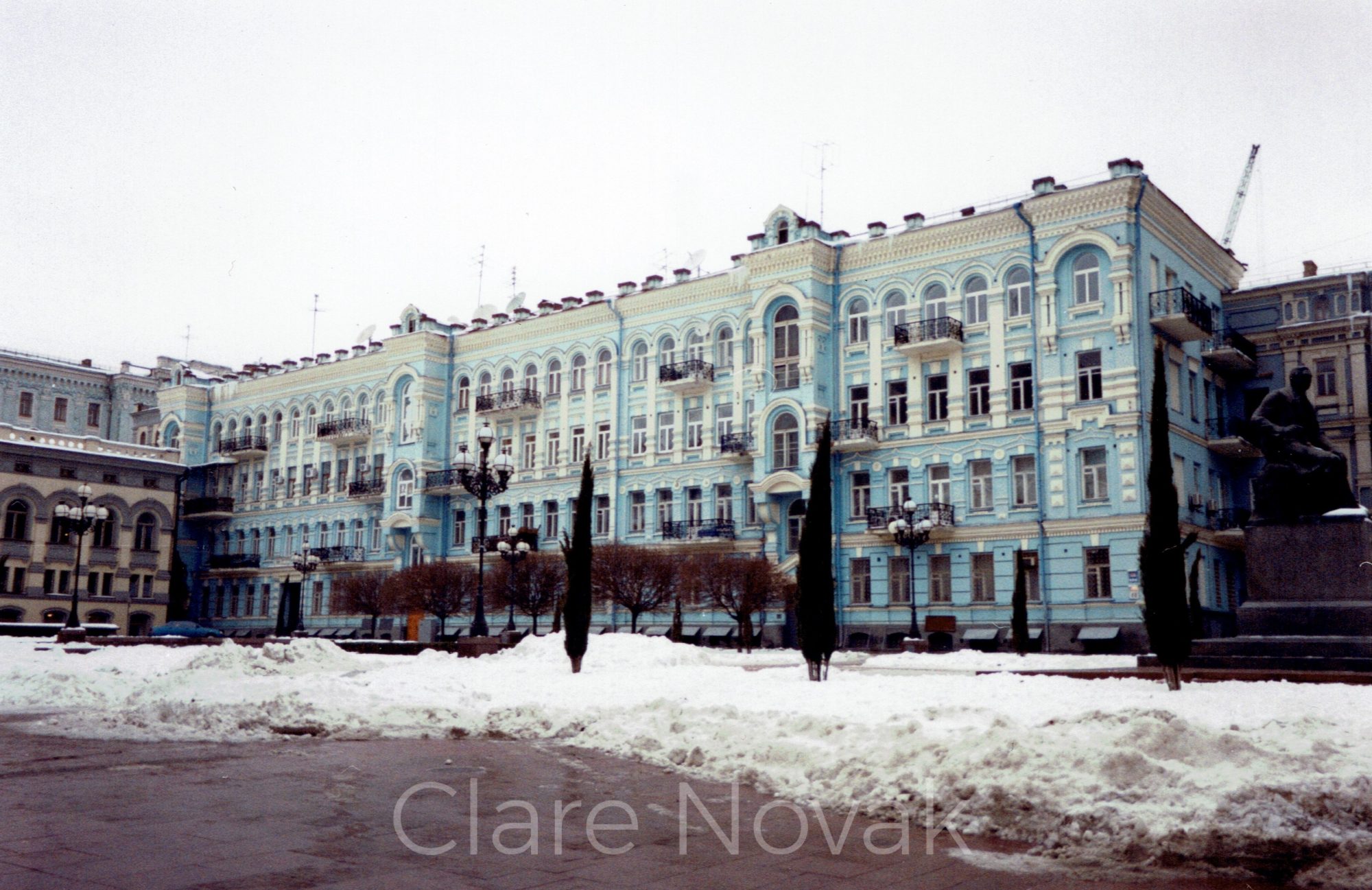 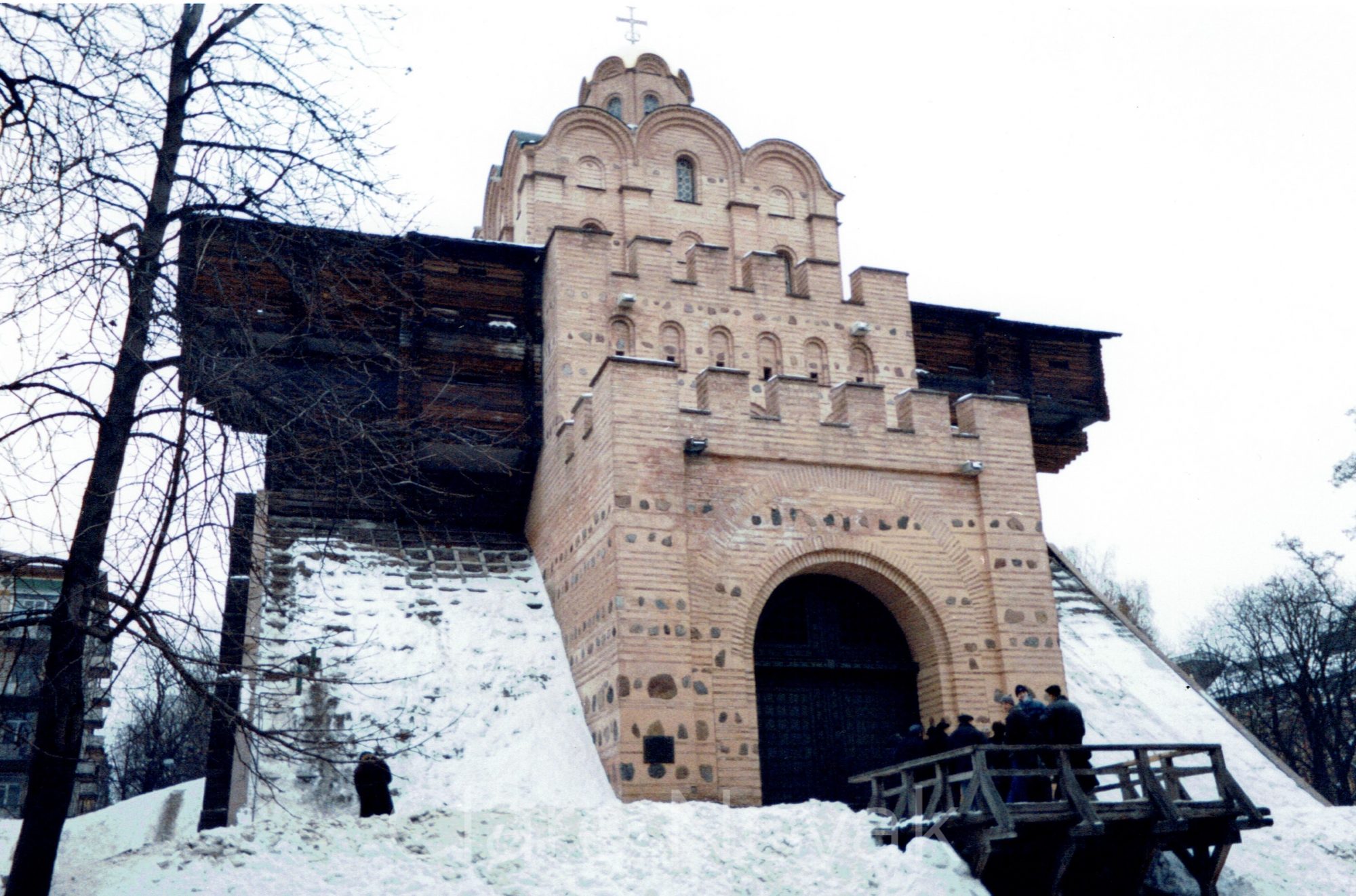 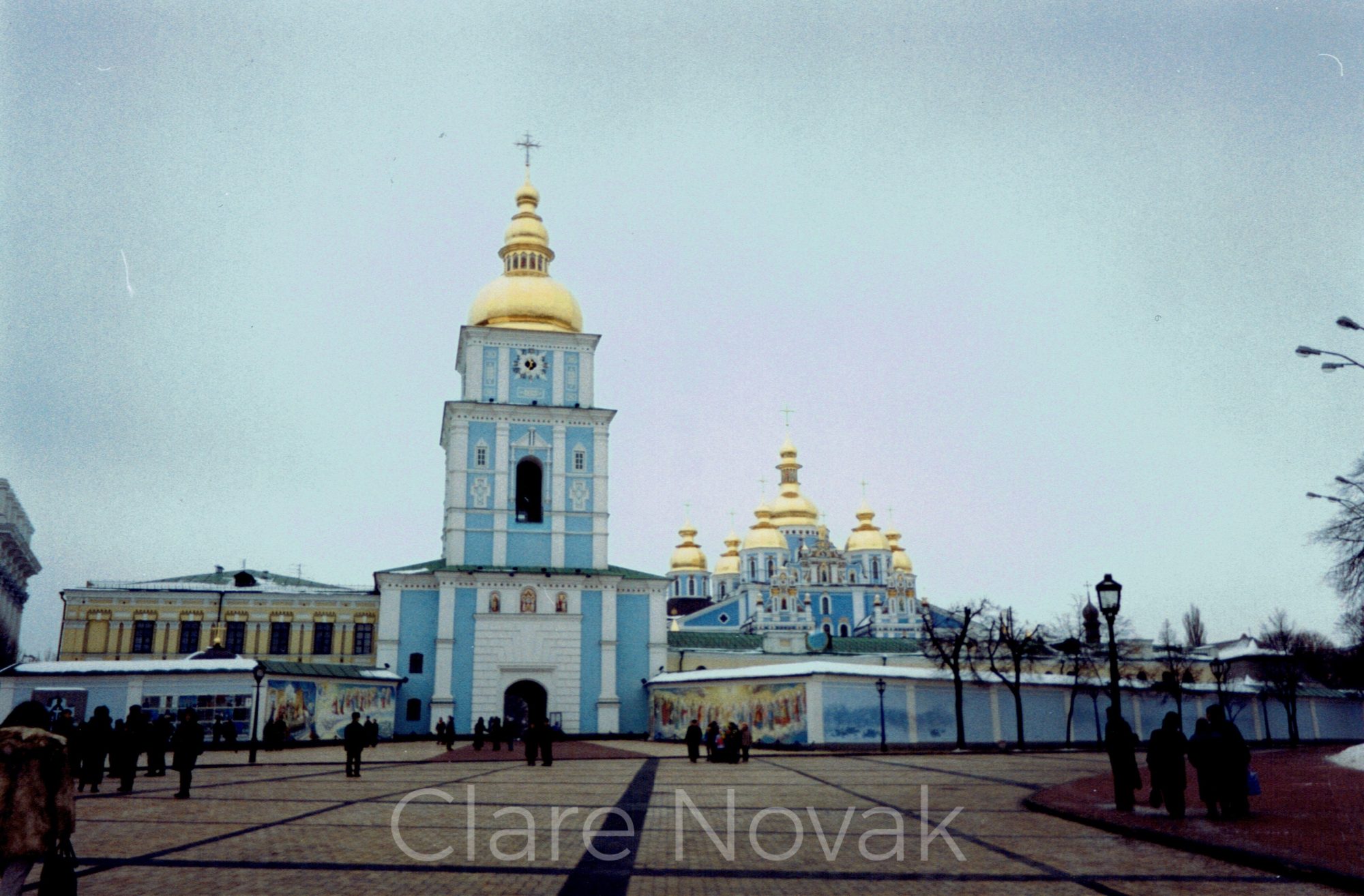 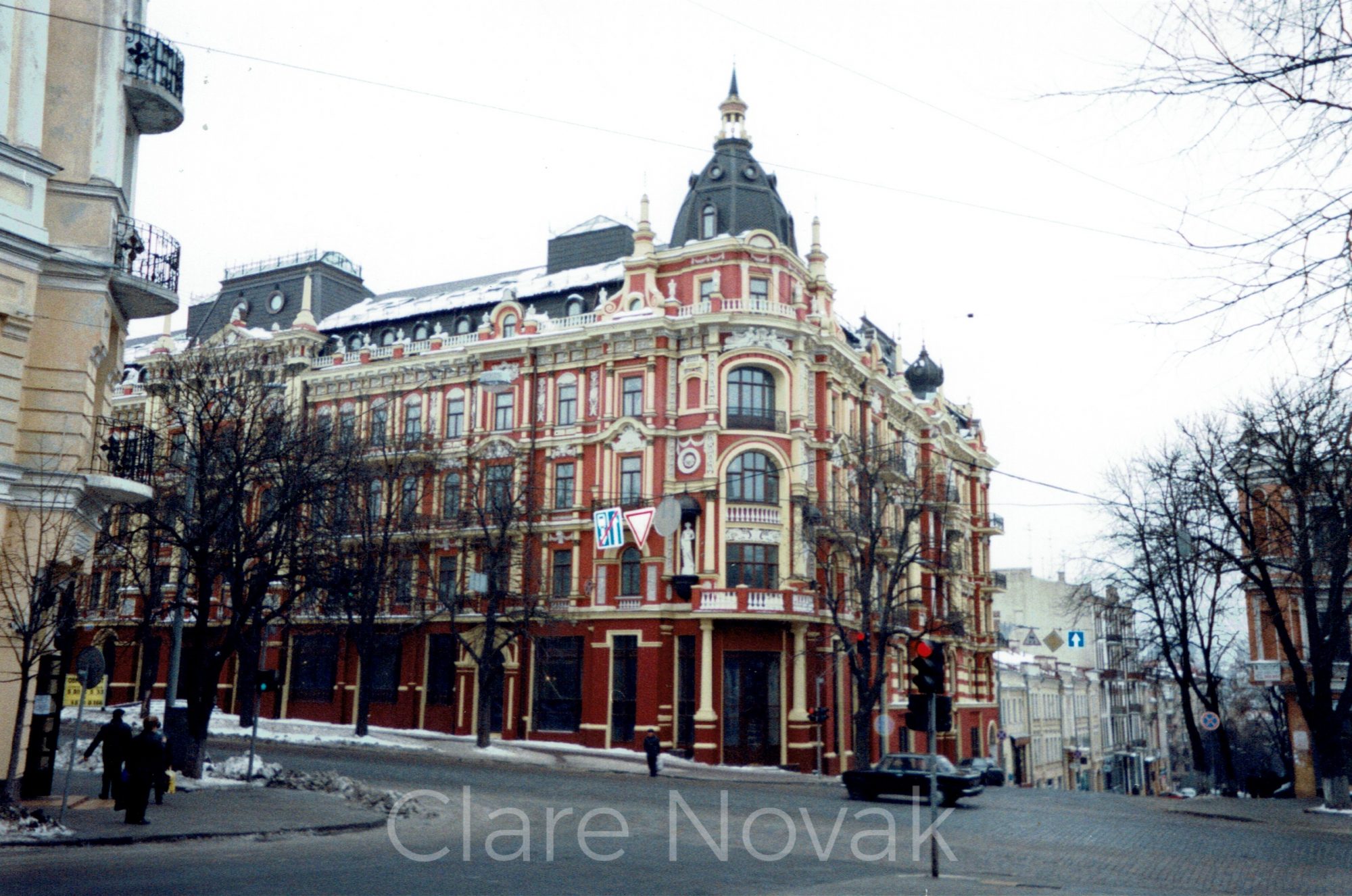 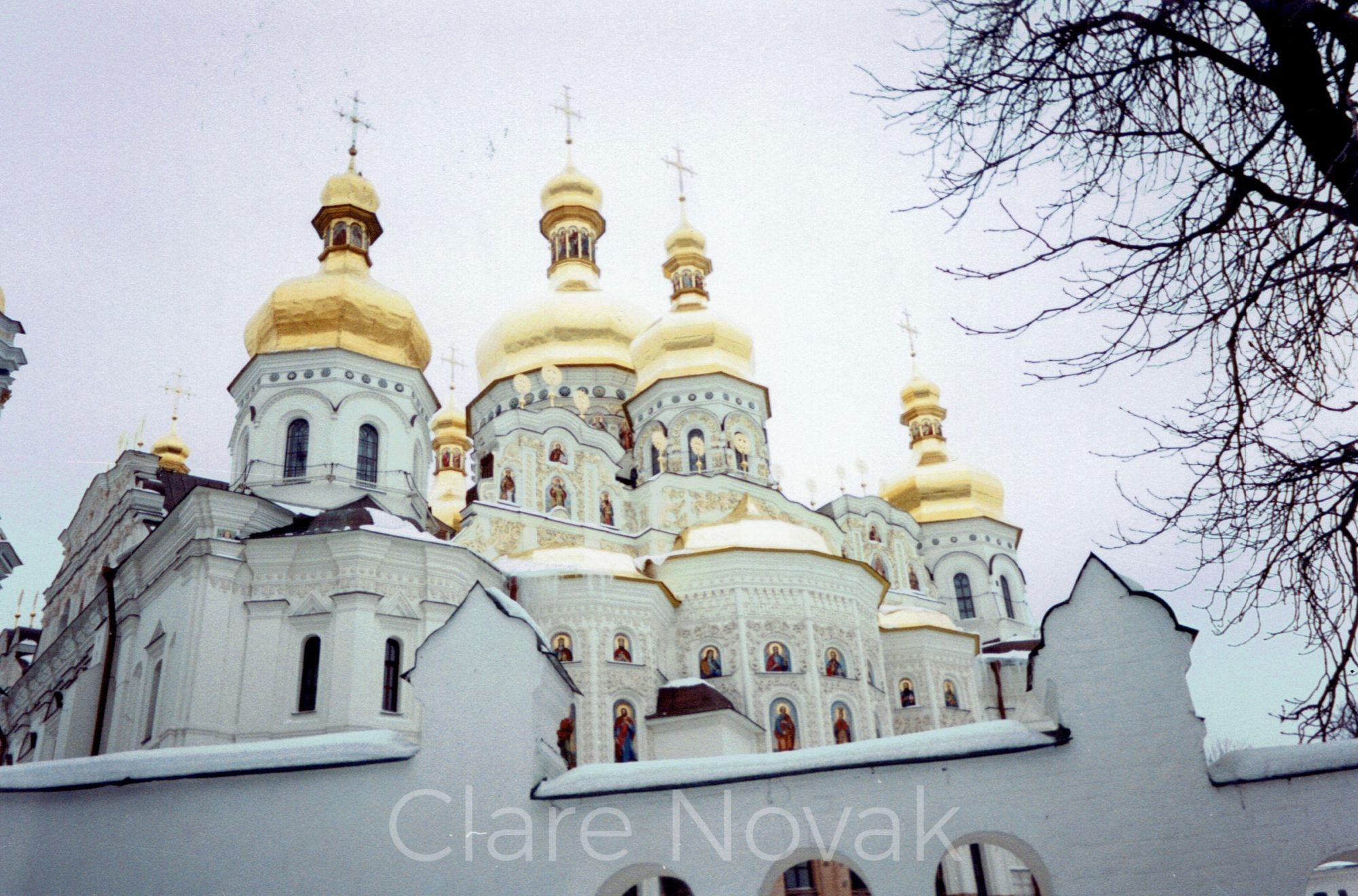 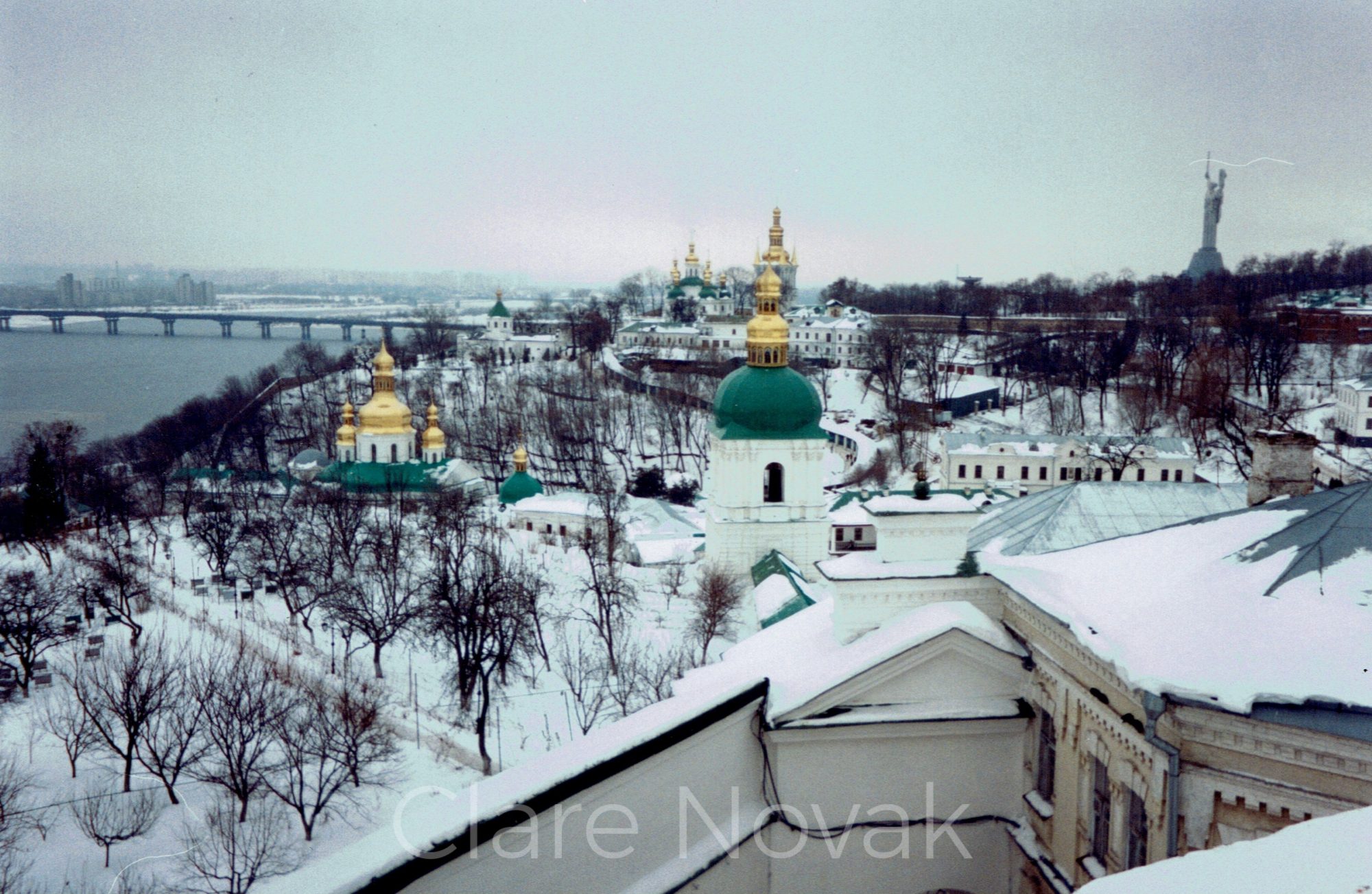 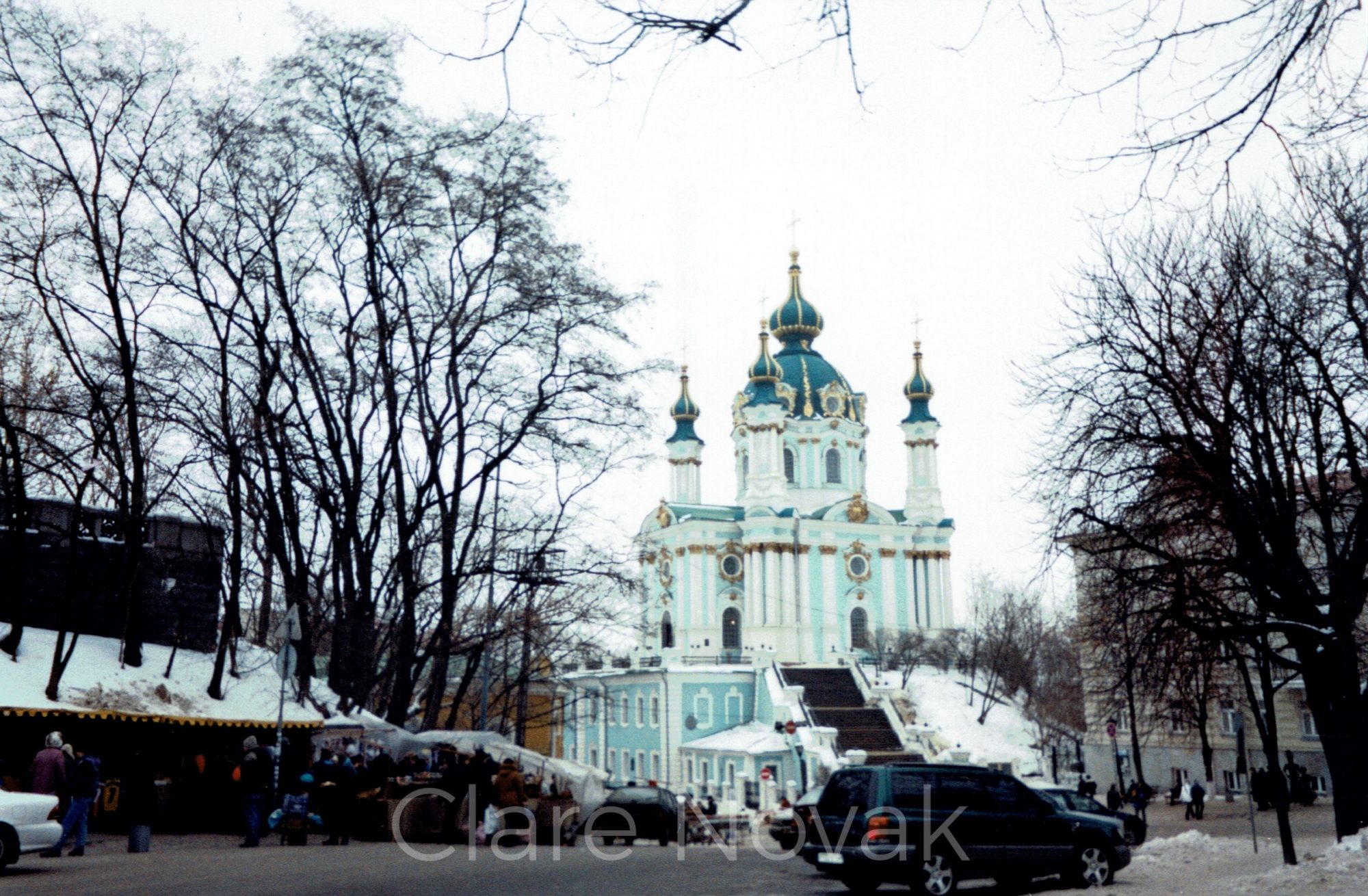 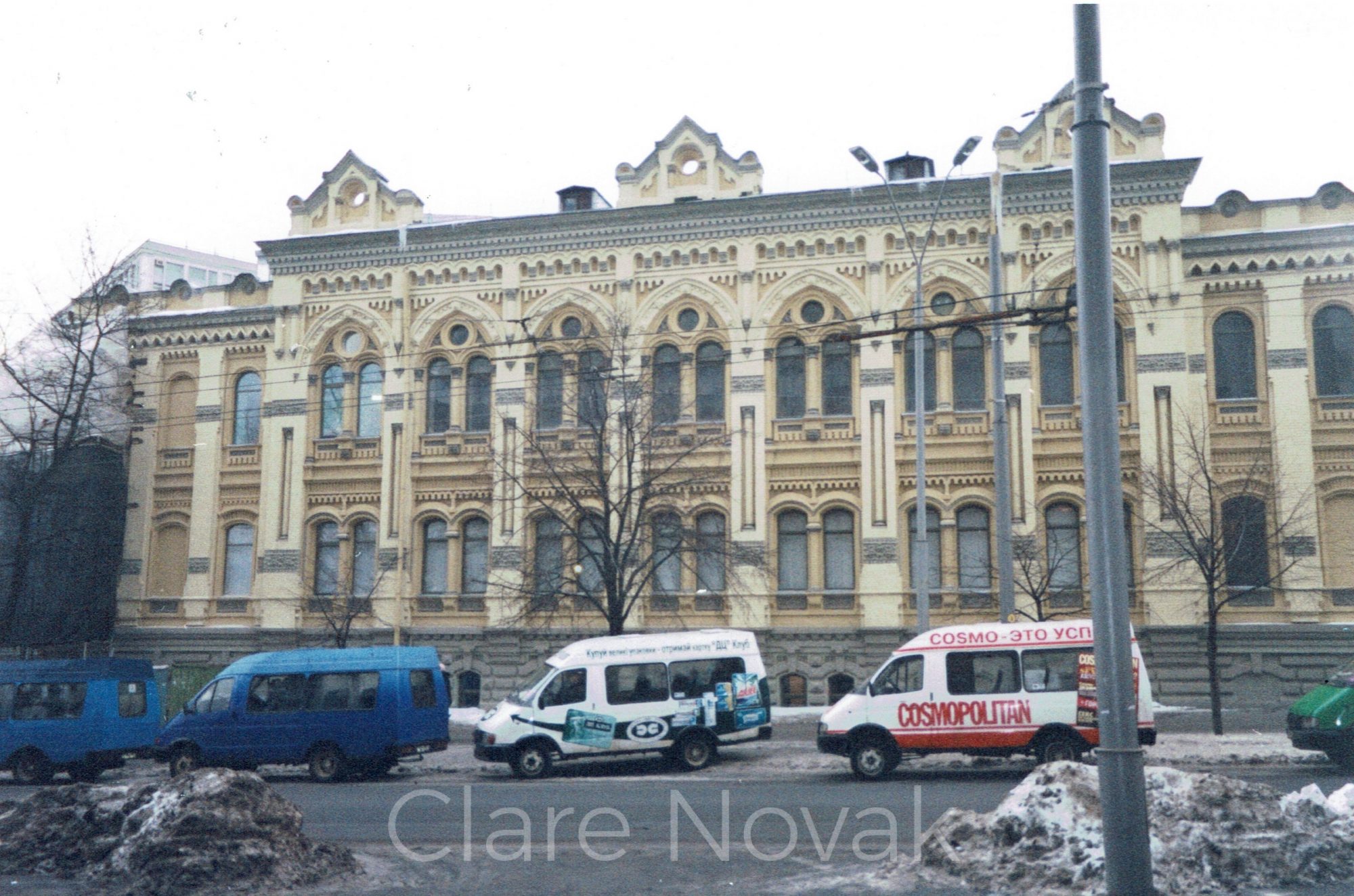 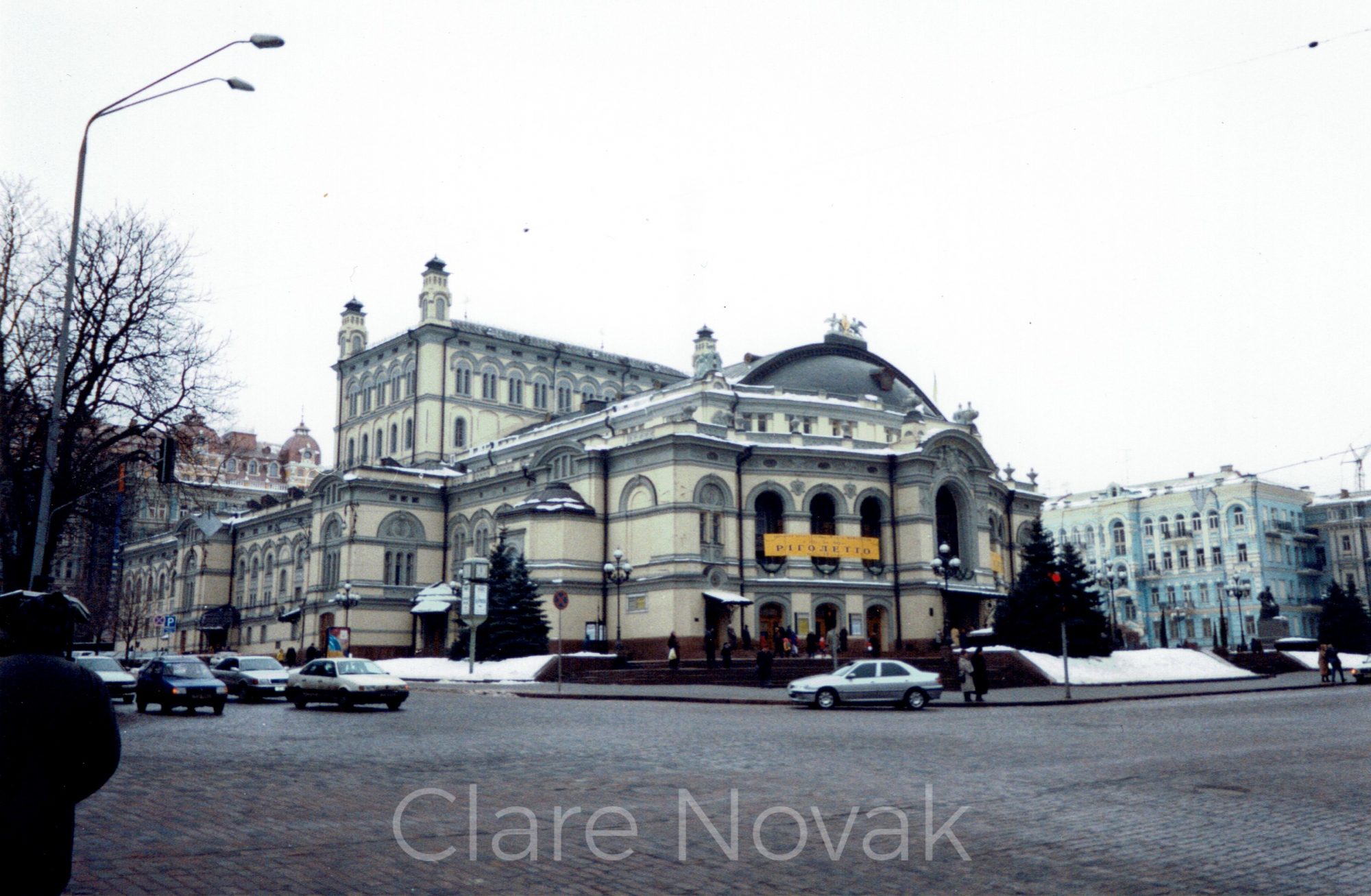 I’ve ordered a lot of strange foods in exotic locations, but I draw the line at ordering jellied cock in public. There’s a lot to love about Kyiv restaurants, but I’ll never know if jellied cock is one of them. In an expensive restaurant, a draft will cost you $1.30 in a Café $0.41! A credible dinner of soup, entrée, beer and tea set me back $5.80 with tip.

Kyiv is in the grand tradition of Eastern European cities. If you throw a rock, it will bounce off a church and hit a bar. Yesterday, Galina took me to St. Sophia, St. Michael, St. Andrew and the Lavra; three churches and a monastery. The churches are truly beautiful, golden onion domes, and painted in pastels that relieve the otherwise dominant slush gray of the city. The Lavra is a monastery complex that covers 26 hectares. It began with a cave in the cliff above the river occupied by St. Anthony. There are currently 76 monks, still living in caves but the complex is largely museums thanks to the Soviet occupation.

At Andrevsky Spoosk (St Andrew’s descent) street vendors set up a market that is as wild as Cairo when it comes to bargaining. Who knows if I really got a good deal on things, but then it was fun and don’t really care! There were of course, Matryoshka dolls (nesting dolls) embroidered goods, carved wood boxes, lacquer boxes and much more. I passed on the T-shirt with the Kalashnikov semi-automatic. “Very popular in America!” Not anymore, I think.

Last night I went to the ballet at the opera house to see a program of Strauss. The opera, an 18th century Ukrainian Baroque building is across the street from a quintessential example of Soviet block architecture. As Galina says, “It is very ugly building in a nice neighborhood. We don’t know what to do with it. Maybe we blow it up.” After having seen it, I rather agree with her. The opera house itself is “Much better now that we got rid of the Russians. They put statues of their ugly rulers in our beautiful arch ways.”

Today I went to the Russian Art Museum. The collection was from the mid-to-late 1800s and had several interest pieces. Don’t worry when you come to Kyiv, everything is bi-lingual—Ukraine and Russian. So, I don’t know who the artists were. The museum itself is a palace from the same era; a grand dame much faded. Parquet floors, carved wood ceiling moldings and crystal chandeliers. I couldn’t resist the call of the only English in the whole place—the words “Restoration Funds” on a plexiglass box. They got a donation from me.

Meat: Any kind, all available parts including the squeal

Warm:  a few degrees below up to freezing

More limited English selections than Cairo, CNN, Eurosport, Deutsche Welle, US movies overdubbed in Ukraine—if you’re lucky there’s enough lag that you can hear the English followed by the Ukraine. If you’re not lucky, they turn the sound down on the English and you only hear the Ukraine.

Still none, end of day 2

As the service person at the hotel says “It is very difficult for them at the airport; this happens from Paris all the time.” Not a word of pity for the naked.

Words look almost familiar here. See if you can solve the last word in the sequence

You gotta love a country where your room key comes attached to a bottle opener. This is so when you are walking home from work you can buy a beer from a street vendor and drink it as you walk home.

Well, if that don’t beat all. For those of you who were under the mistaken impression that Fettuccini alfredo was heart attach on a plate, I say “Ha! What an amateur contestant!” The clear winner is a Ukraine kiss—squares of pork fat with garlic and paprika—suicide by food. And that wasn’t the oddest thing in this restaurant. Billed as a Cossack restaurant, each room was a theme from Cossack history, a garden, a living room, hide covered wagons, and horse’s asses for bar seats. Kid you not. They are, of course, wooden horse’s asses, but asses they are.

Every bar has to have a band. The first set this trio played was traditional Ukrainian; the second set, Euro Pop.  As the band came back after break, they announced, “And now, the American Set!” I cringed a bit, not knowing where they would go with it; the opening was the notably cringe worthy “Achy, Breakey Heart”.