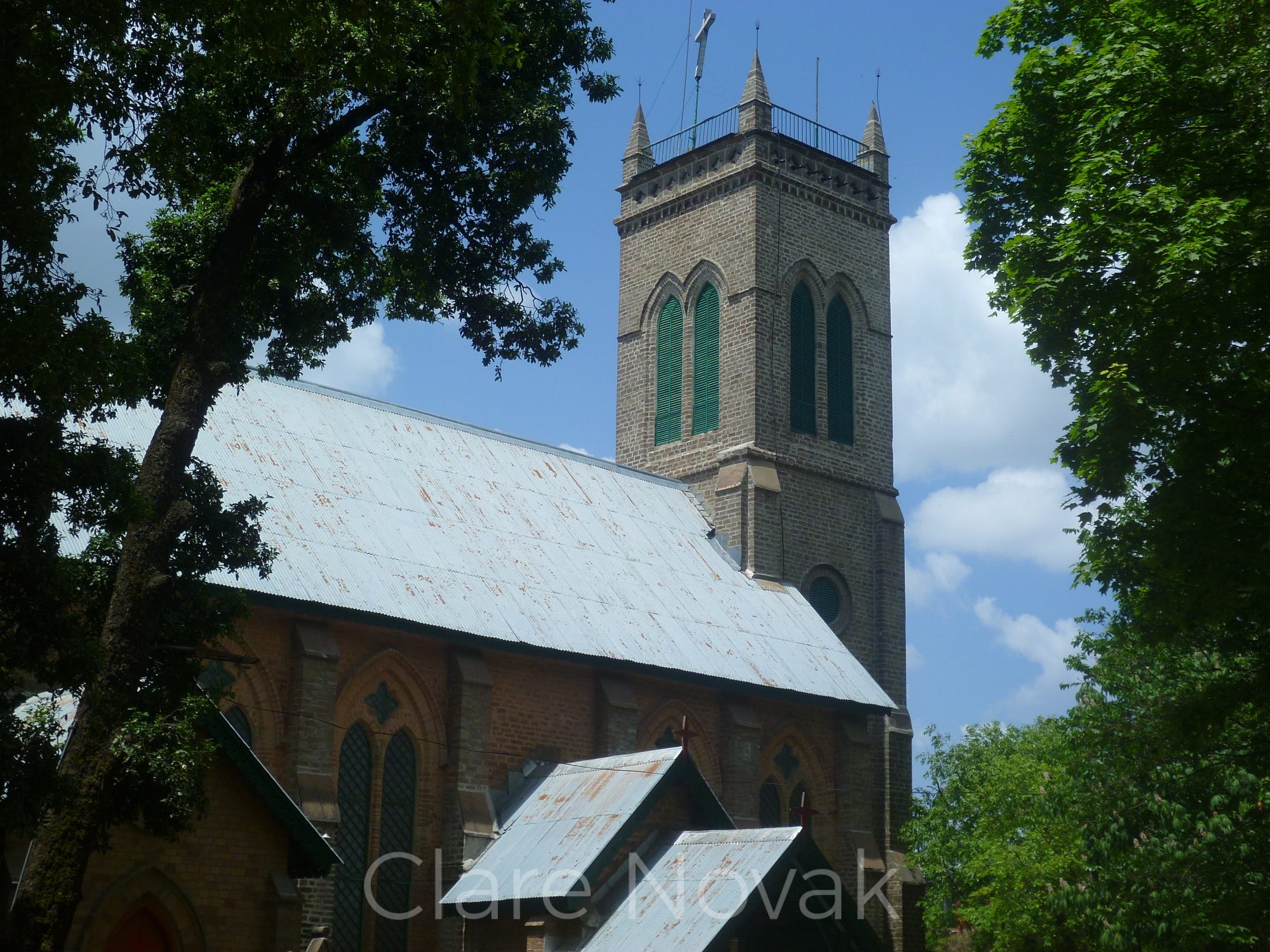 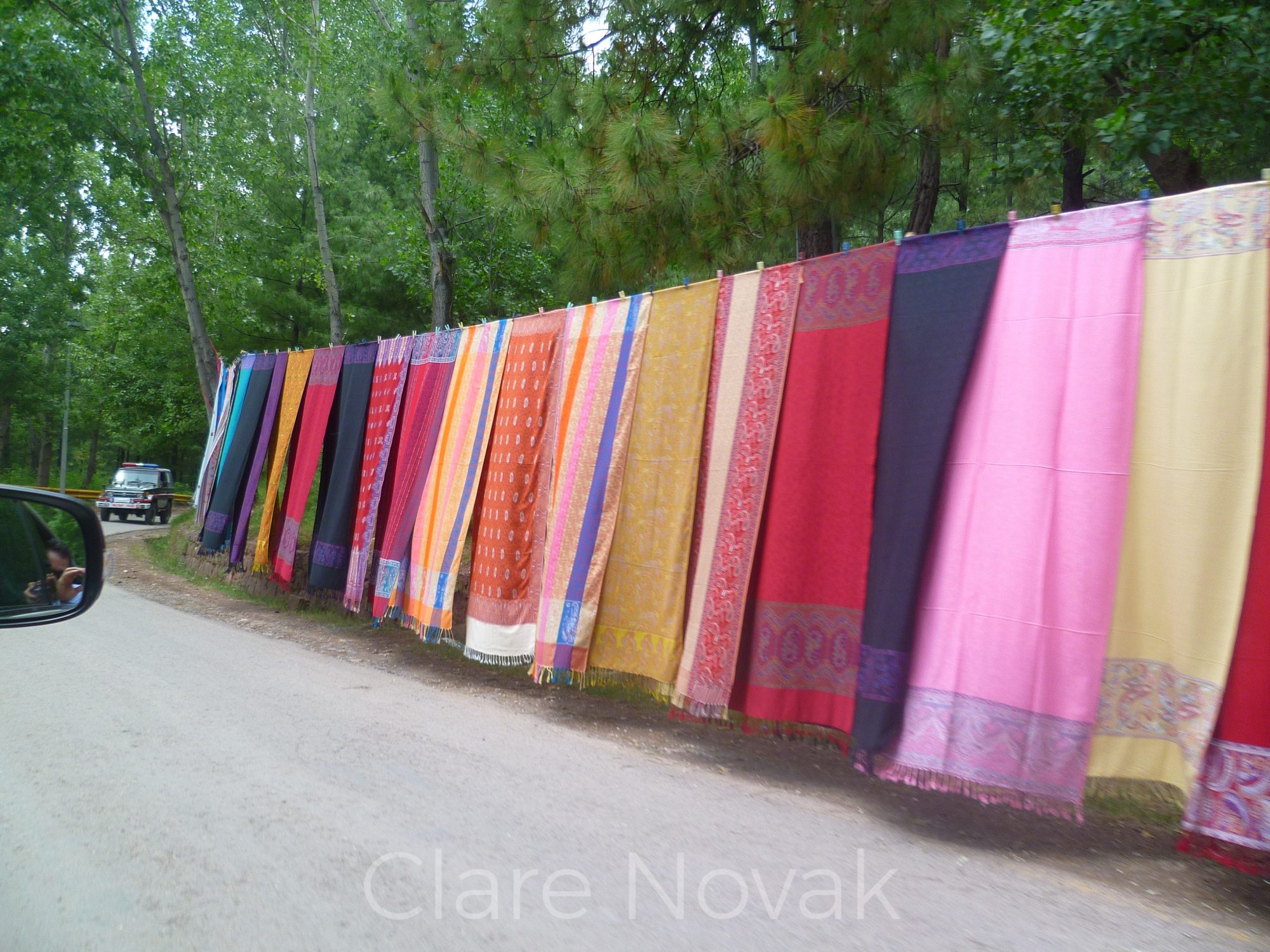 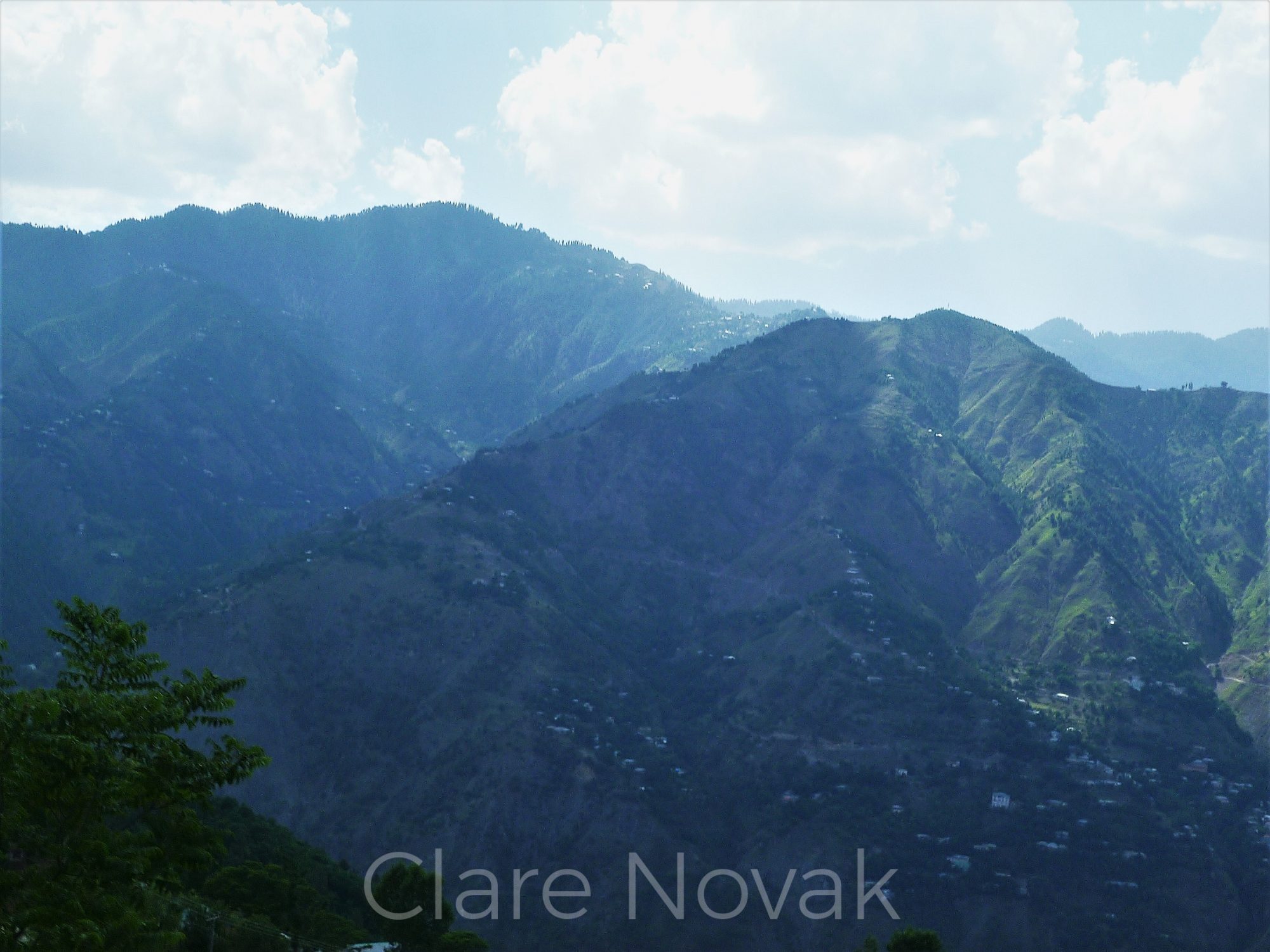 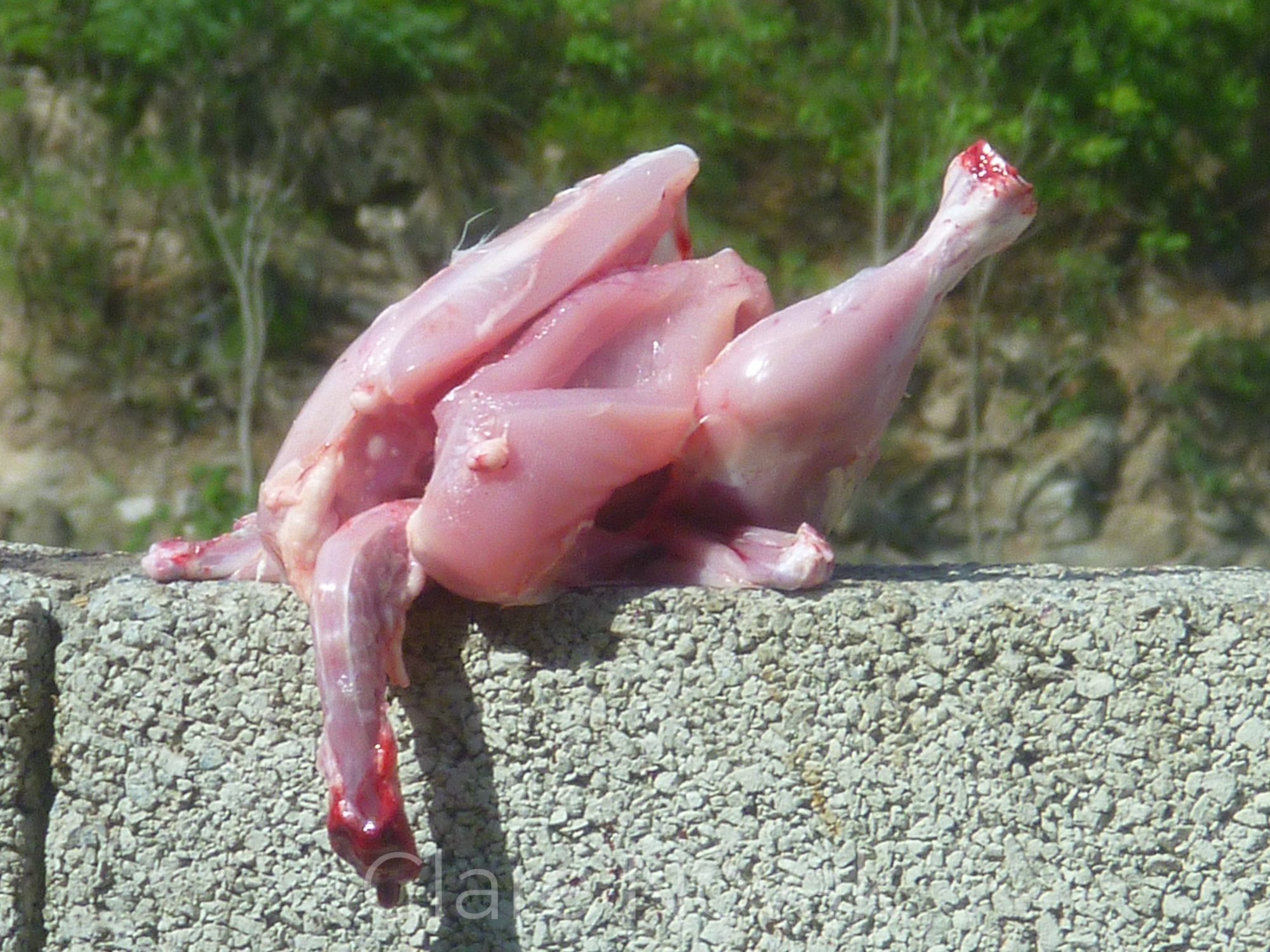 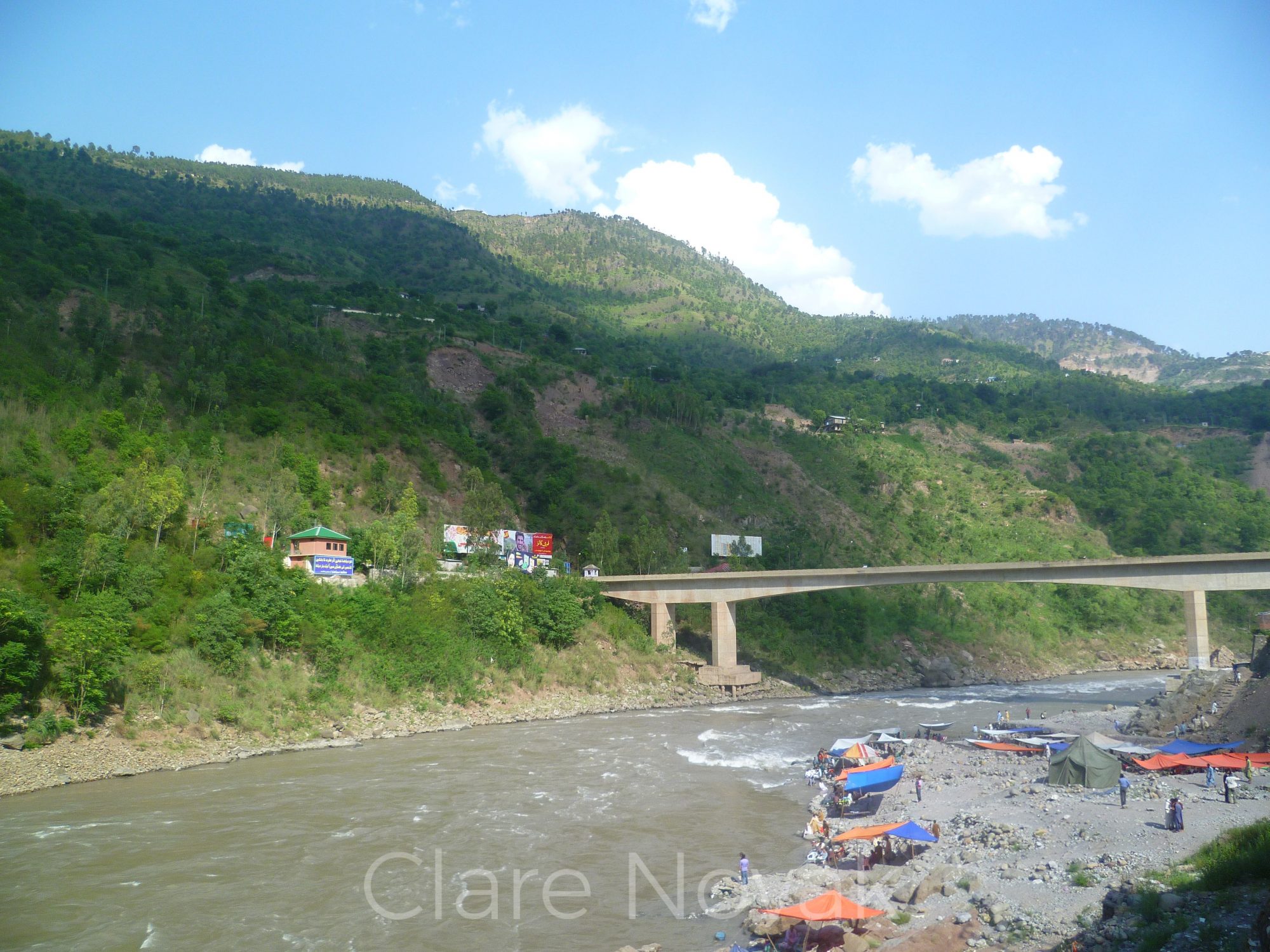 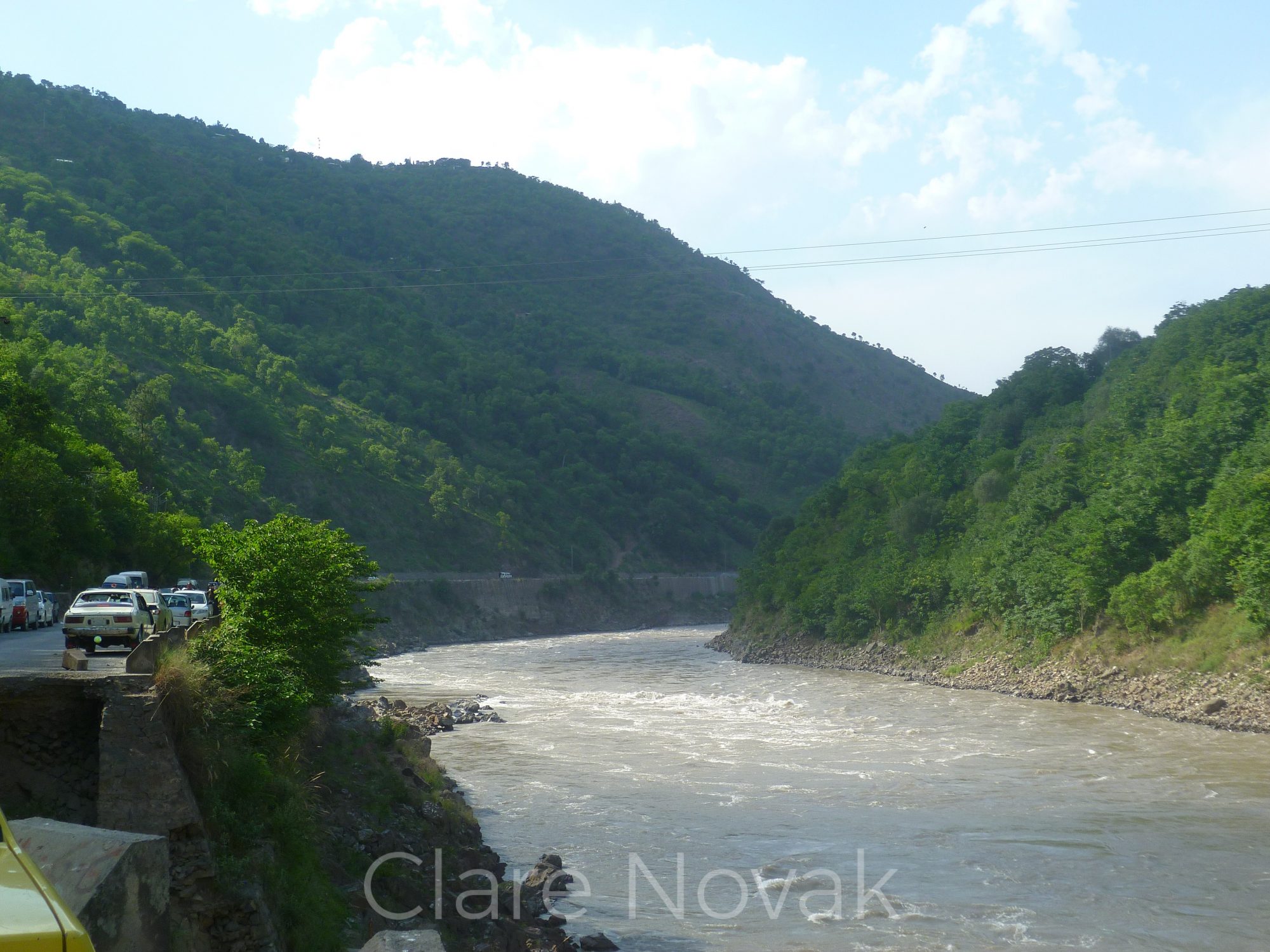 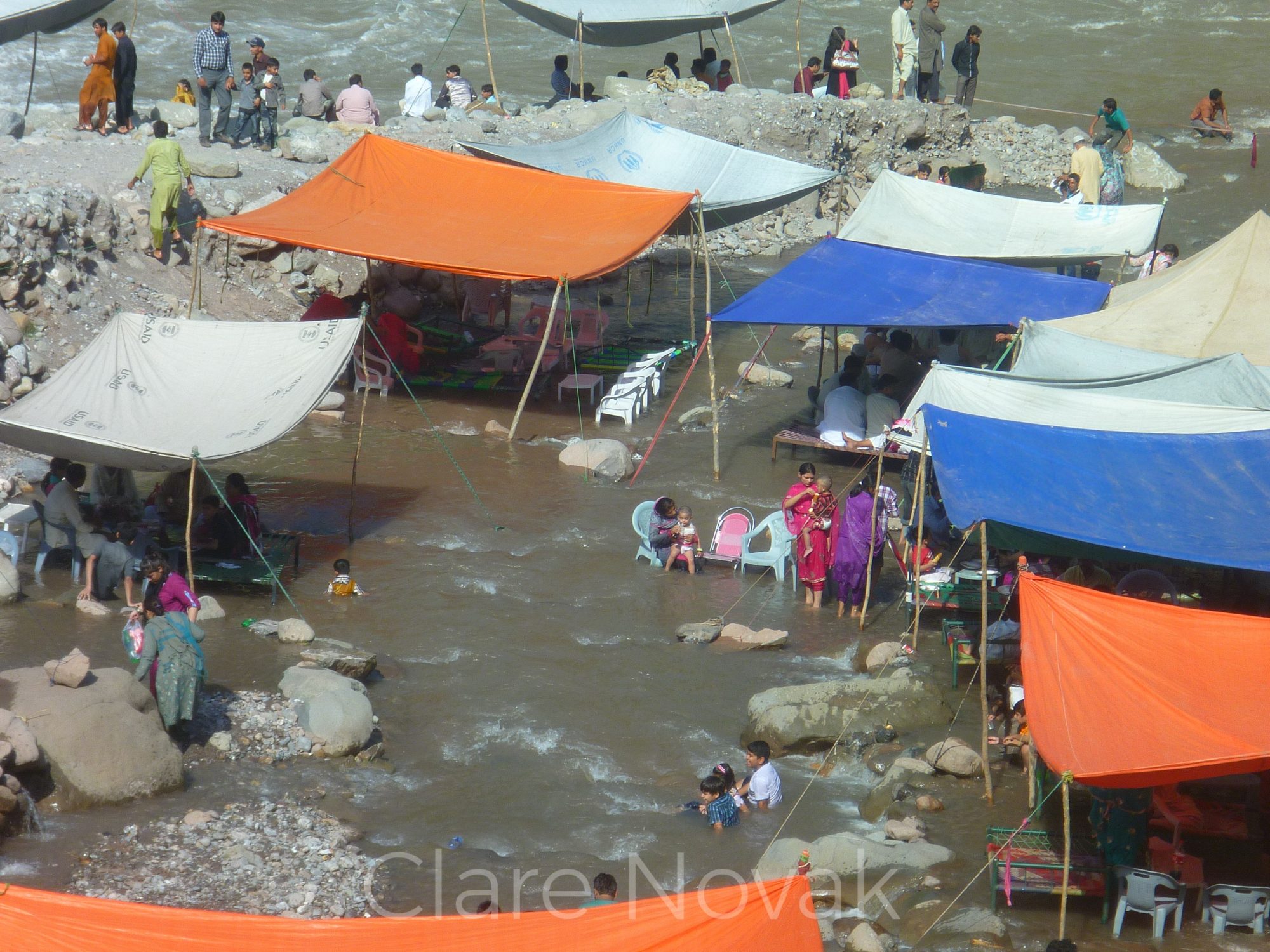 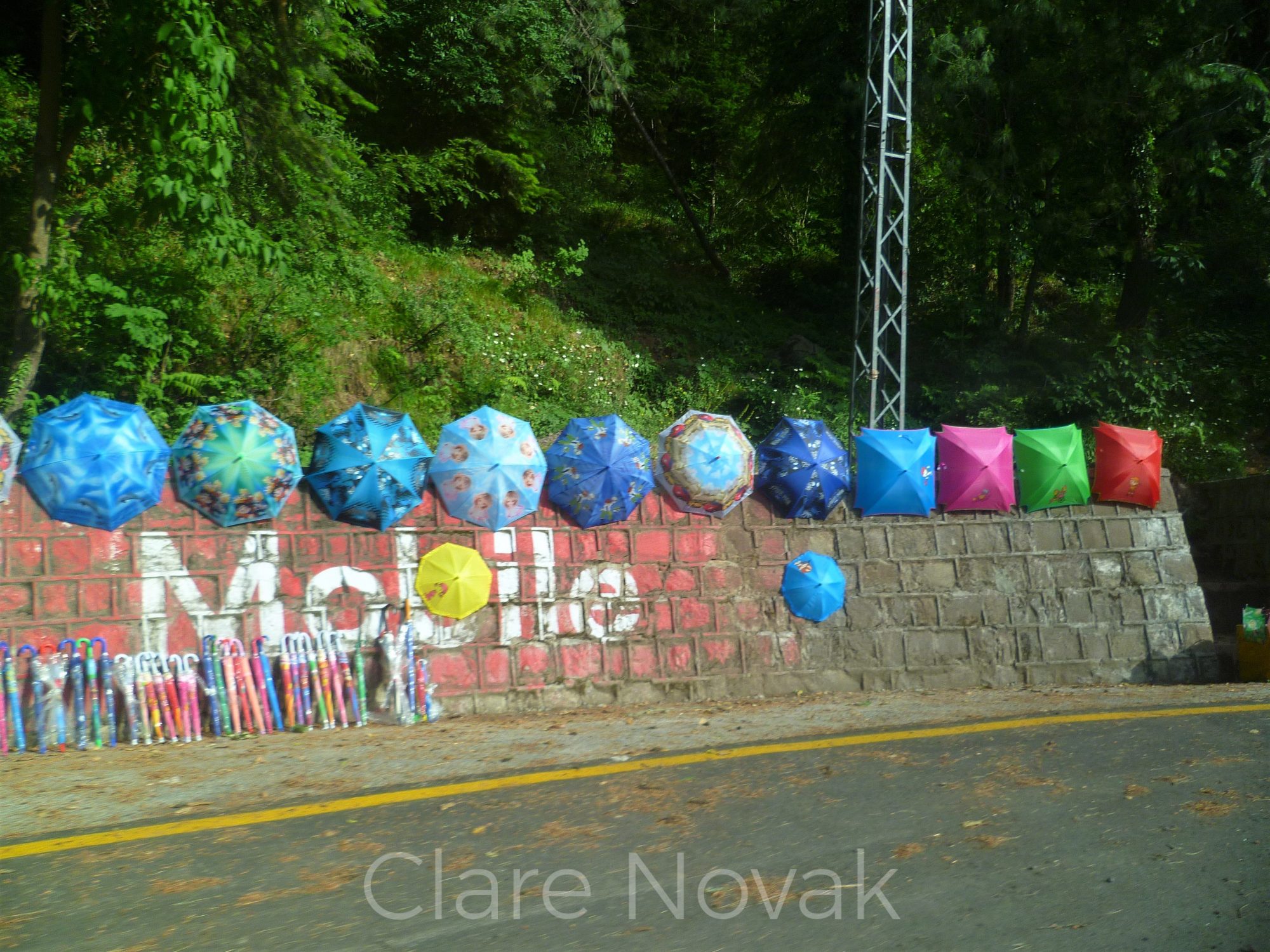 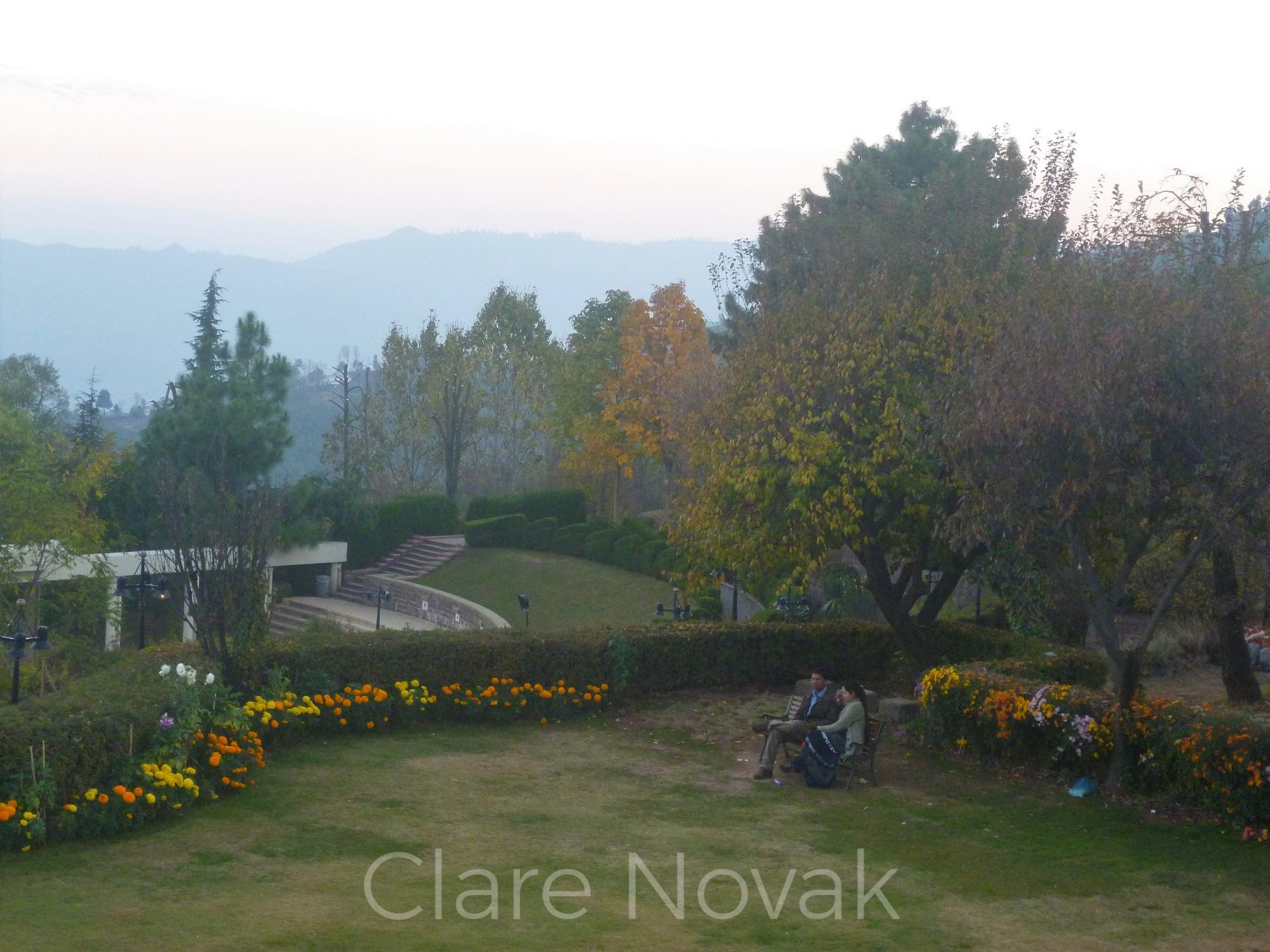 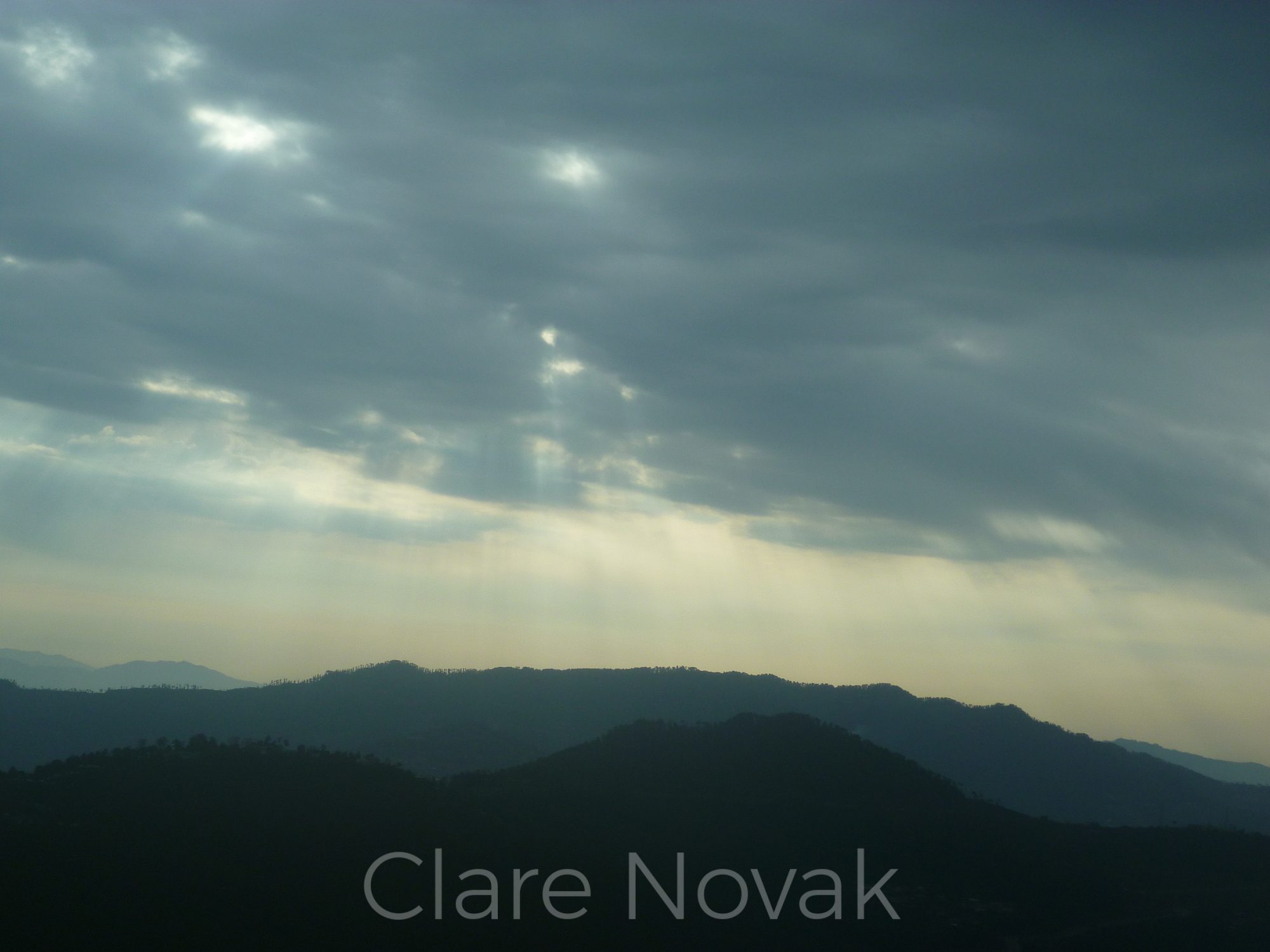 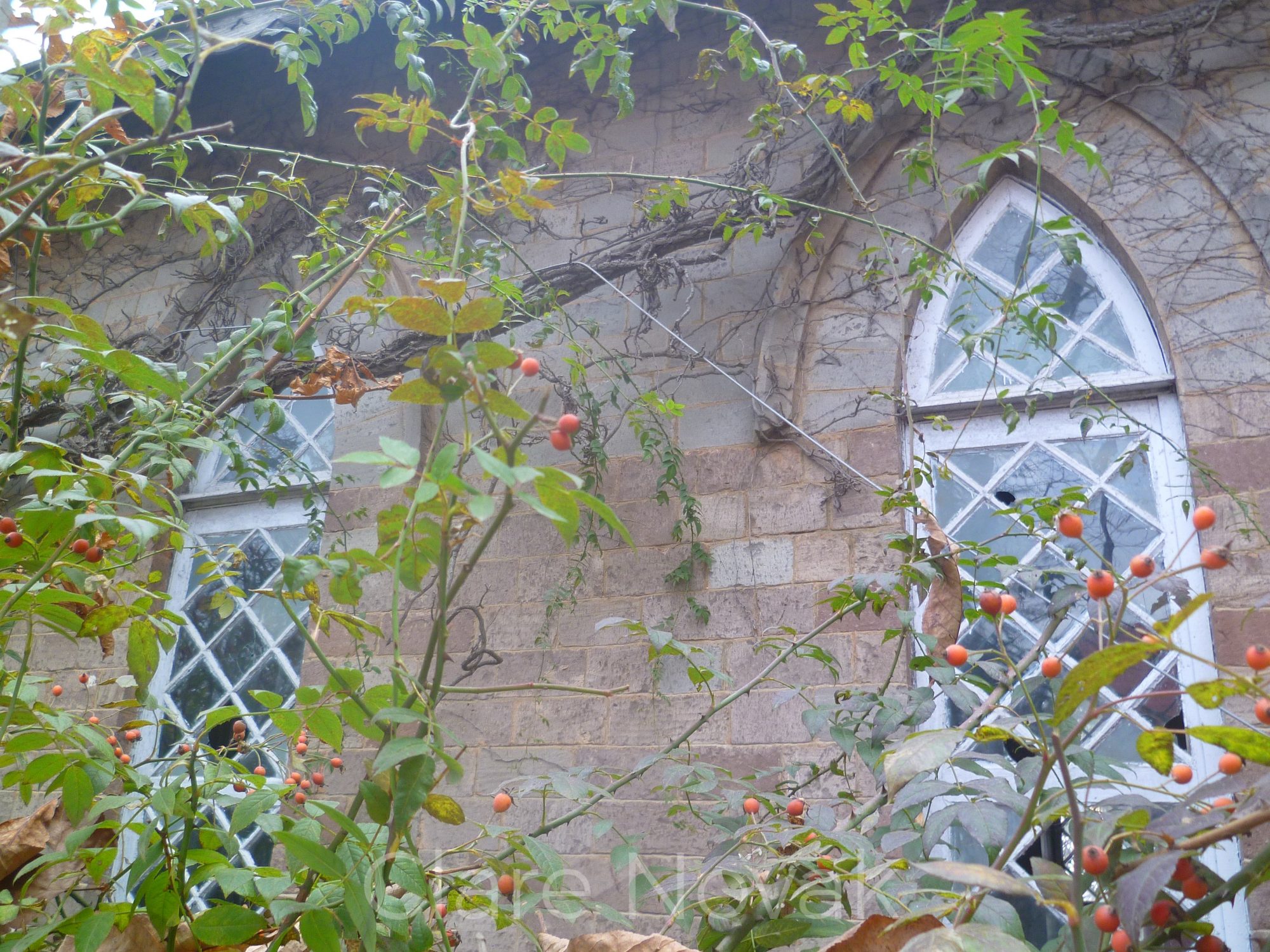 Simply getting out was a joy. Going to the mountains was even better. We wound our way to Muree—about 7,000 feet above sea level where it was dry, cool and perfectly lovely. The scenery is the best of Muree. The town had been built up in the mid-1800s as a summer retreat for the British army. What remains of the 1800s British is a single Anglican church; the quiet church yard is the peace and beauty the British came there for.

Inside was the peaceful spirituality of an empty church. Modest stained glass graced the sanctuary and a pipe organ the loft. Simple wood and whitewashed walls held the marbles telling of those who passed. Infants, children and retired soldiers told their stories on the walls.

Outside was the crowded market street filled the same small shops and beckoning merchants. “Come, look, it is free to look.” J needed a wash room, so even before we found the church, we sat in a small restaurant, having water, paratha and channa. At least B, J and A did. I declined more than a few sips of water and a bite of bread and beans. J assumed it was because I didn’t like spice. Later I explained it was to avoid the dodgy washroom facilities.

After the bread and water, we wandered down to the end of the market where there was an overlook and took some photos. The chairlift was 1.3 klicks off but J wasn’t willing to walk it. We turned around and headed back into town for a couple hours of J fabric shopping. Neither B nor I needed anything, so we looked about a bit but neither of us had much interest. After about two hours and getting hungry, we had arrived back at the start of the market street. After some scrambling we decided to head for Bhurban, a nearby resort, for lunch at the Pearl Continental Hotel (PC).

Leaving Muree, we saw guys offering horseback rides. All the white horses were clean and well fed with English saddles. B laughed when I told him I wanted a pony ride. We both wondered why only white horses, but no one knew

The Road to Bhurban

This paved mountain path was an endless series of switchbacks and hairpin turns. On one side was an open drop downhill and on the other, walls blocking landslides on the uphill. Add occasional goats and cows walking in the road, and your imagination might get somewhere near the actual experience.  My guess is we never got above 25 miles per hour and probably averaged 10. The scenery was worth the trip up to about 9,000 feet. Now that you’ve got an idea of the road, add the roadside vendors.

Umbrella vendors opened dozens of colorful umbrellas and stuck them into the rock walls on the side of the road. If a car stopped to buy, it stopped in a lane, thus forcing any cars behind to creep around them or risk three cars abreast in one and a half lanes. Shawl vendors strung a clothesline and hung their colorful wares along the curves of these same roads. Pretty to look at and potentially lethal to stop and buy.

A few small towns clinging to both sides of the road created traffic jams. We backed up a few times to let a truck or bus get through. We laughed when people honked; honking was going to have zero effect on the process of sorting out which vehicle could zig which way to allow zagging of another such that eventually everyone could move. The road to Bhurban is beautiful and beautifully insane.

Getting into the PC was quite the chore. Everything and everyone was security checked before we were allowed to enter.  Beautiful resort, beautiful view and a mediocre lunch. Later, we were rested and ready to take on one more site. A was keen to have us go to the Neelum River Valley.

Chicken on a Wall

The road to the Neelum took us down several thousand feet through the beautiful mountains. Based on A’s description, we were expecting the river bridge to be a beautiful old bridge. The Neelum Valley is beautiful and the river rushed through it, even now in the dry season. A told us the monsoons would bring it up by at least 10 feet. Traffic slowed us to a slow walk. As I looked at a tributary, I saw colorful tents along it. Under the tents, which were placed in shallow water, people were taking their lunch. This was a restaurant adapted to the heat and the love of children playing in water. These tents were not only along the tributary but along the Neelum itself.

Our side of the river was Punjab on the other Kashmir. So, we have seen Kashmir. Ah, the chicken—the photo tells the chicken’s tale. A guy was killing and plucking chickens on the side of the road. Pick your chicken, have it killed, cooked and sent to your waterside table. There is a lot to be said for fresh poultry over mass farmed varieties.

As always, when I see a bridge or an onward path, I wanted to cross into Kashmir. Sadly, this was not allowed for US citizen on the project. Kashmir is a name we have always heard and associated with luxury textiles and breathtaking scenery. Perhaps some day I’ll see it from its own side of the river.