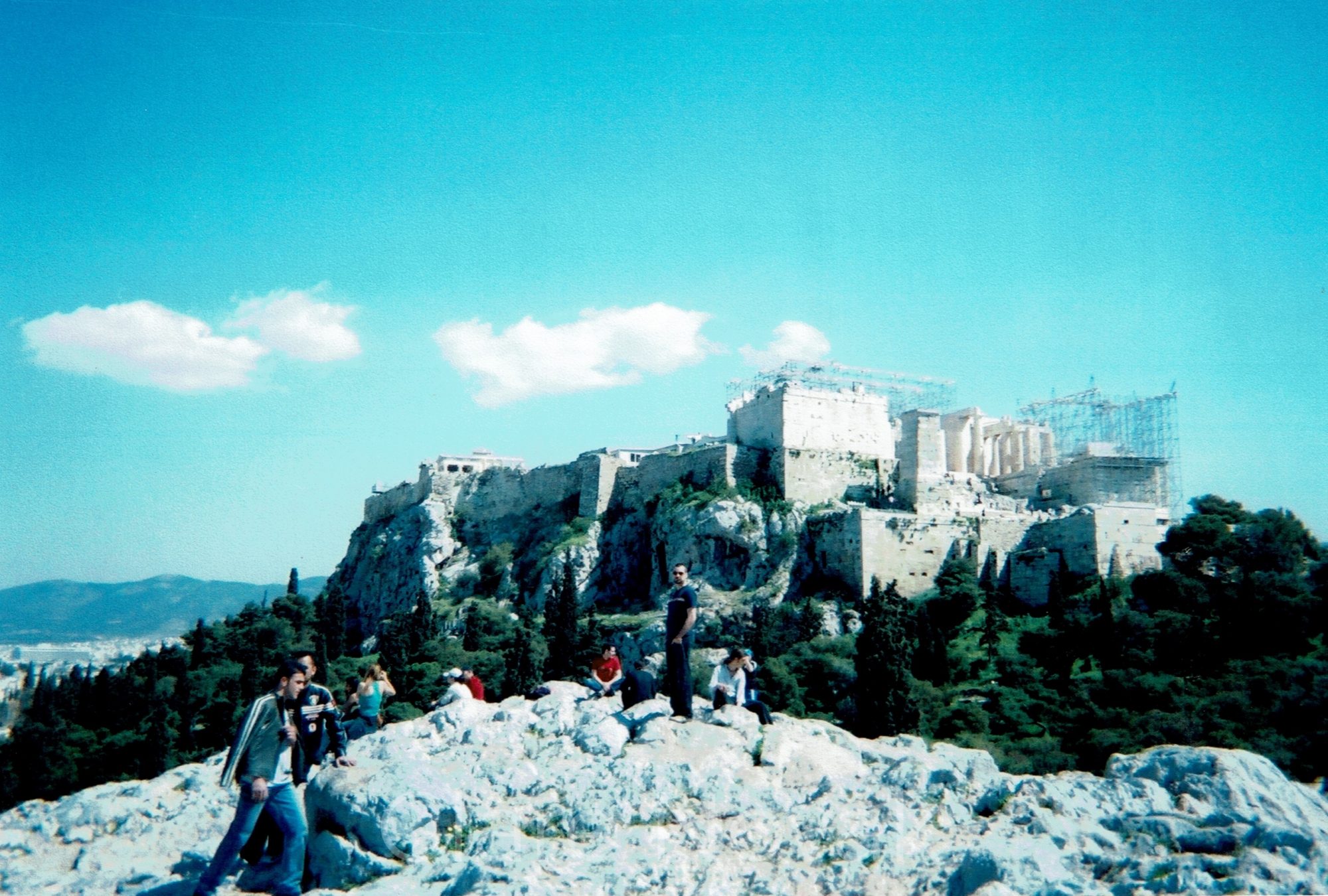 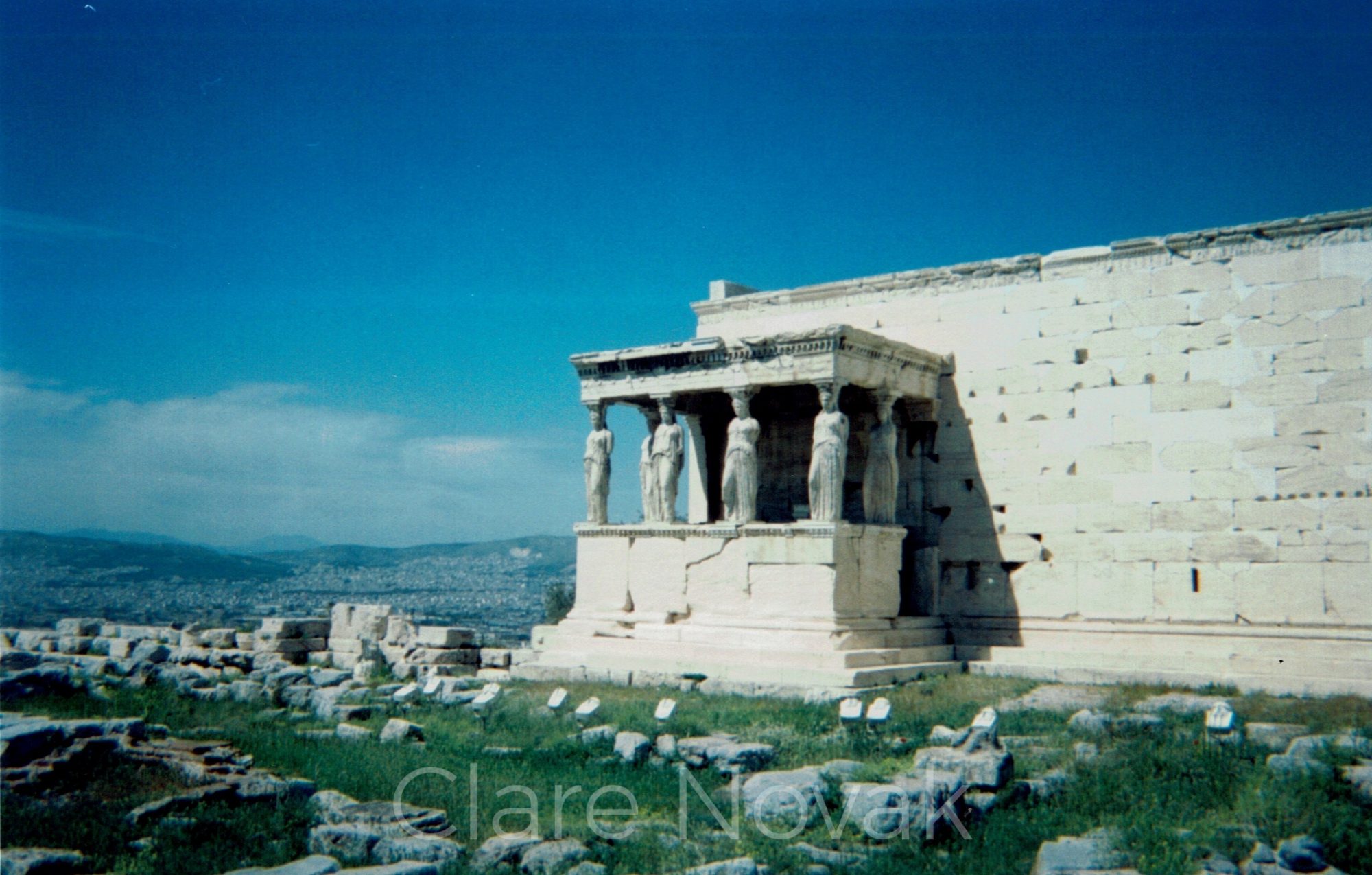 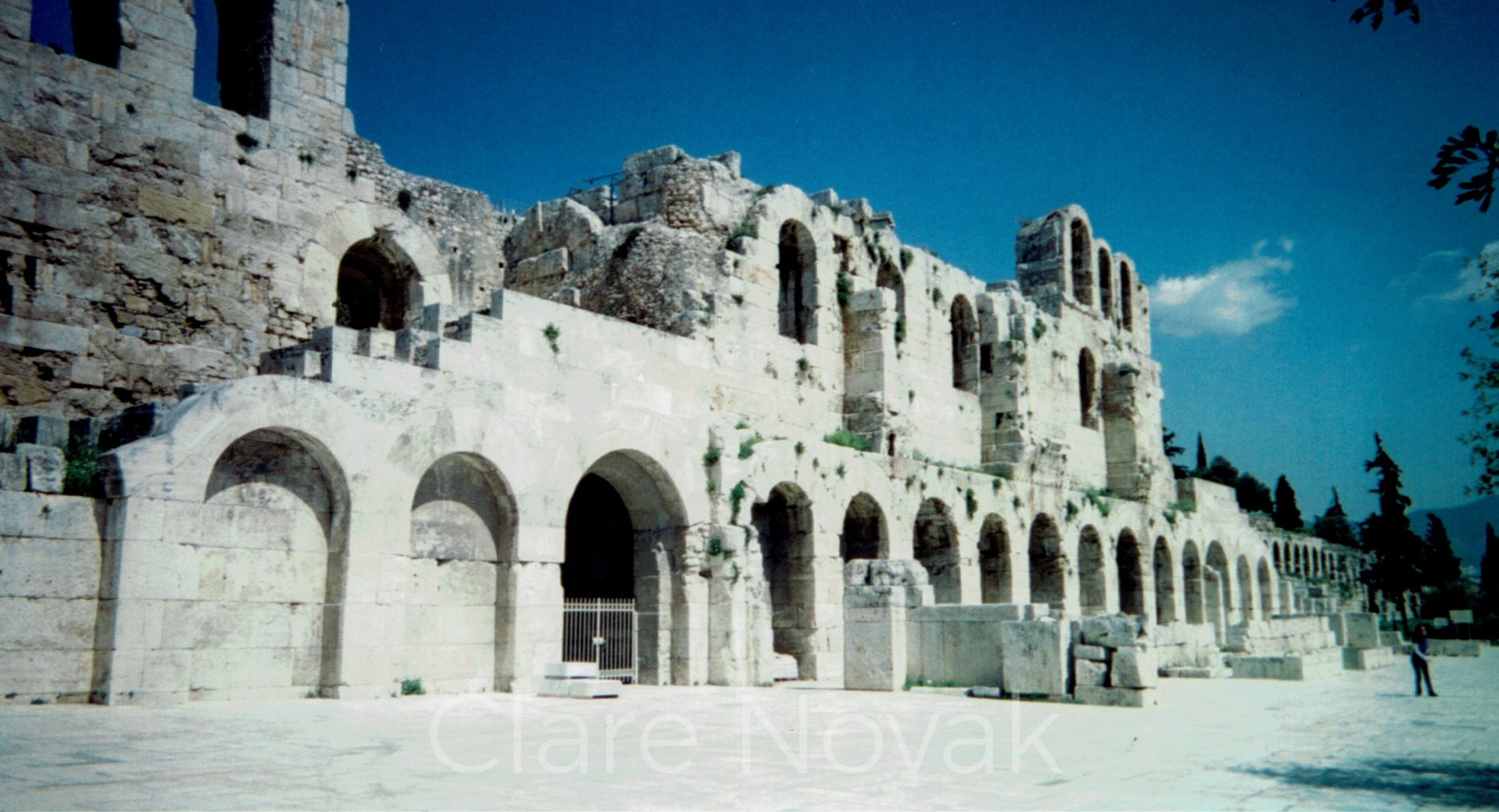 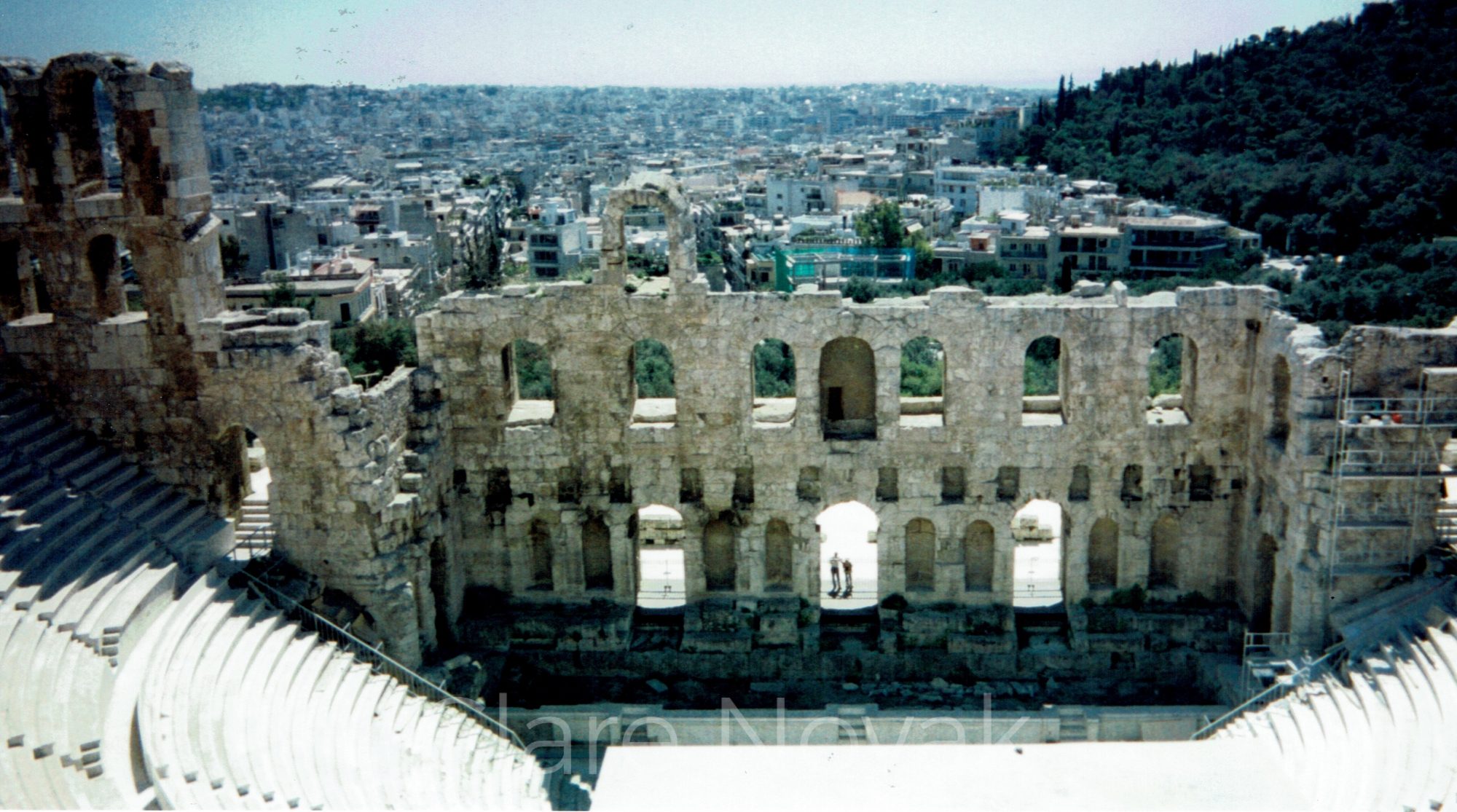 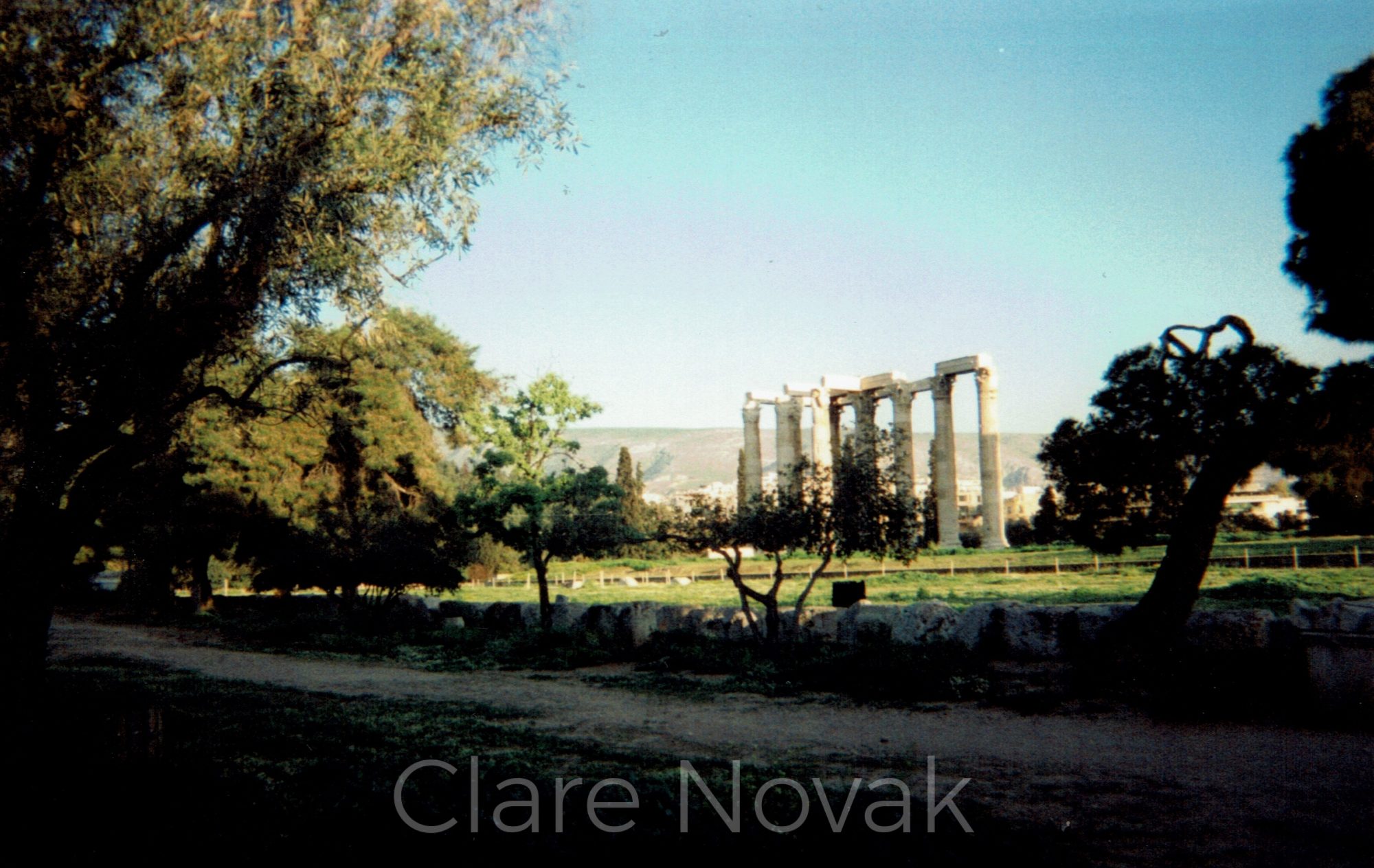 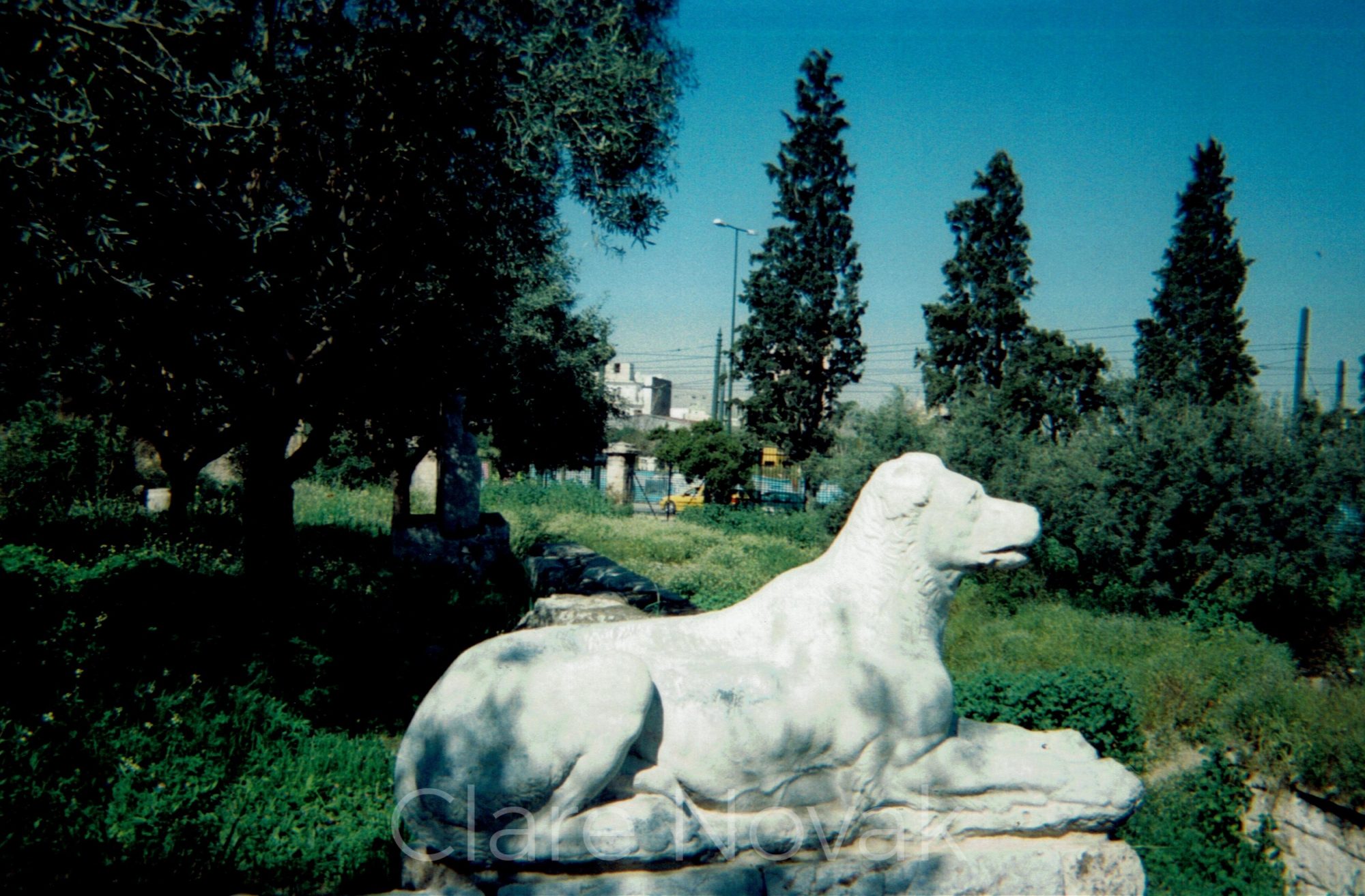 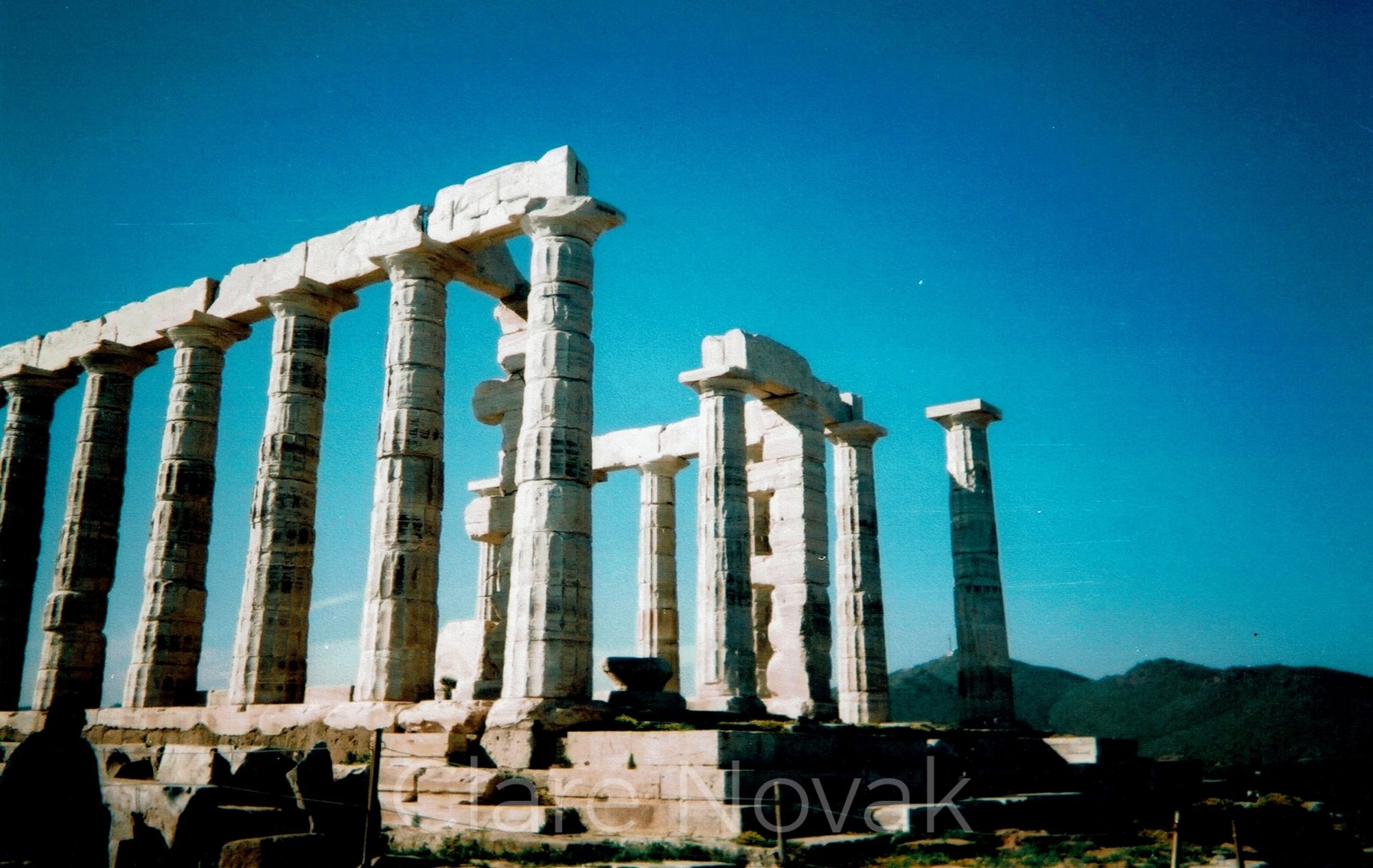 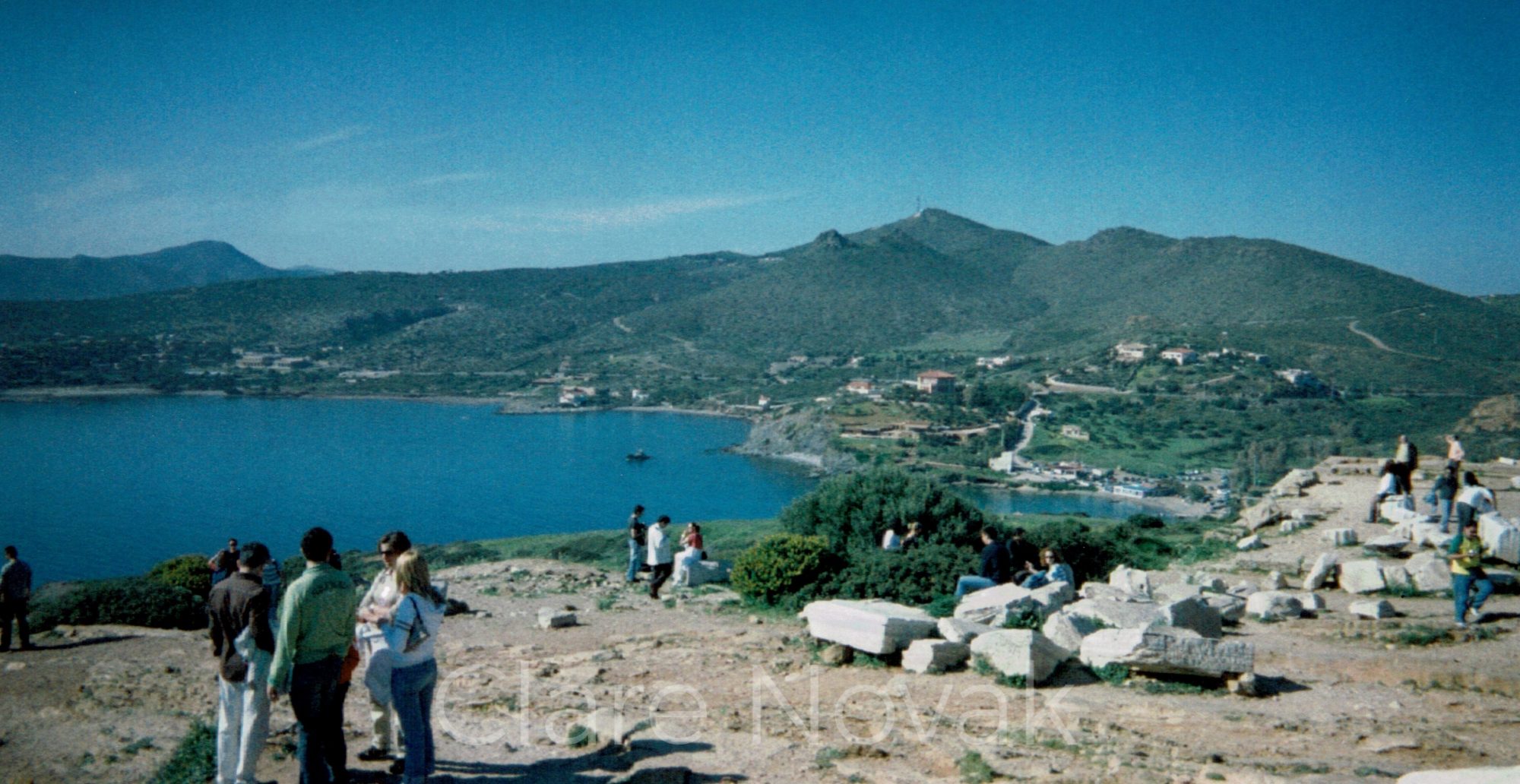 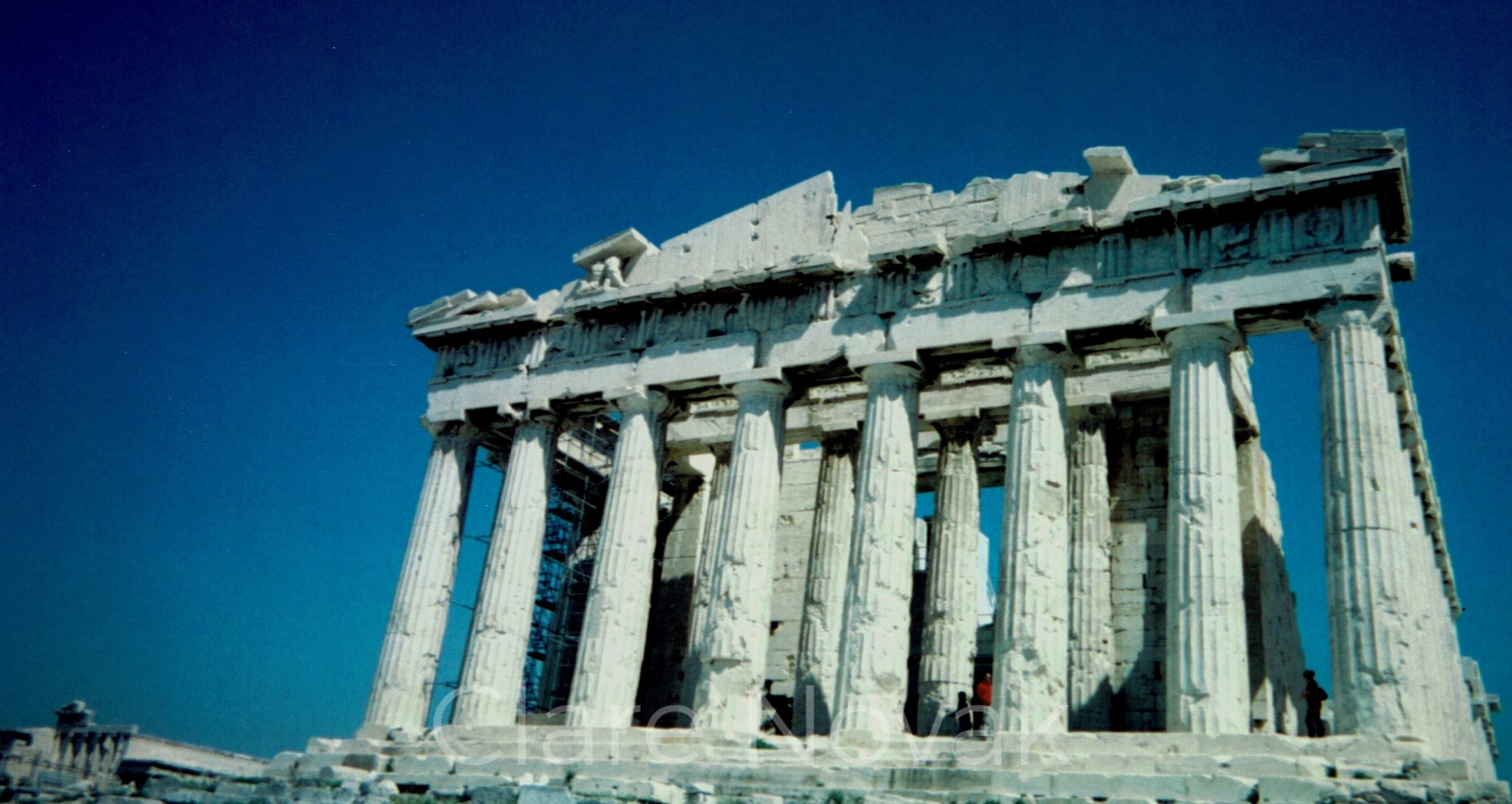 There’s lovely meter to that title phrase; too bad I haven’t the rest of the poem to go with it. I can stand on my balcony and see the Acropolis. It is lit and looks stately and proud by night. Unfortunately, close up and in daylight the old girl shows her flaws. The scaffolds and cranes of restoration mar the nighttime dignity. The Agora and Temple of Olympian Zeus fare better by daylight with their weathered but unsupported columns. The museum in the Agora houses a remnant of democracy we might do well to resurrect. A glass case of pot shards, inscribed with names, are the votes—not for, but against. This is the vote of ostracism where the politician receiving the most votes was not hailed as victor but rather banished from Athens for 10 years.  If only we’d have adopted this in the constitution….

The land around the ruins, left to meadow, is awash in flowers. Three varieties of purple flowers with only Genetian familiar to me, red poppies and anemone, yellow bushes and flowers of I know not what and a low bedding plant like miniature daisies. Redbud trees line streets everywhere, that is, everywhere but the National Garden, which is green and only green.

Today I received a vindication of sorts. The guide told me there are over 5,000 species of flowering plants in Greece. I don’t feel nearly as inadequate even though today we saw even more flowers I could not identify, with the exception of phlox. Spring is yellow, pink, purple—the Easter colors—with the occasional splash of lurid red.

The history of museums is the history of the monied. If it were not for countries, religions and the wealthy, museums would be as impoverished as those missing from history. Except for the occasional hunting point and plowshare, museums are full of things the rich were sure they could take with them to the afterlife. They are also filled with things that would not be, if not for the wealth of families, churches and states. What sheep herder’s family ever possessed a diadem of gold, set with imperial topaz, rubies, emeralds and pearls? What fisherman’s wife held in her hands the heap of pearls in Mary’s halo?

What olive farmer decorated his one-room house with yards and yards of hand embroidered draperies? Poor people may as well have not existed for all that is left of them—broken pot shards, clay oil lamps and a threshing board. Given that we’ve gone to minimalist burials, leaving the goodies to relatives, I propose that we enliven the careers of future archeologists by buying a bunch of really strange stuff and burying it with us! Chia pet anyone? Some future archeologist could spend an entire dissertation musing on the social or religious significance of Chia heads.

The most charming piece in the museum was a Greek urn with a decoration most aptly described as “Octopus by Edvard Munch.”

Excellent idea. At least once in her life, every woman needs a piece of outsized, gaudy, and horrendously overblown jewelry. A case full of such pieces resides at the Lalaounis Jewelry Museum. My favorite was a wreath of golden leaves draped around the neck and spilling down to encircle a breast. Some woman must have had one heck of a victory.

Still French after all these years….

Silly me, I had assumed that mistaking me for French was simply a local phenomenon in Egypt. Not so. Here in Athens I’m asked if I’m French. Must be dressing in black, pulling my hair back in a pony tail and wearing scarves…

A beautiful drive along the coast on a perfect day, what could be better? The Temple was merely an excuse to explore and enjoy a spring day. I found a place I could retire the sea in my eyes and the mountains at my back. I just need to learn to speak Greek.