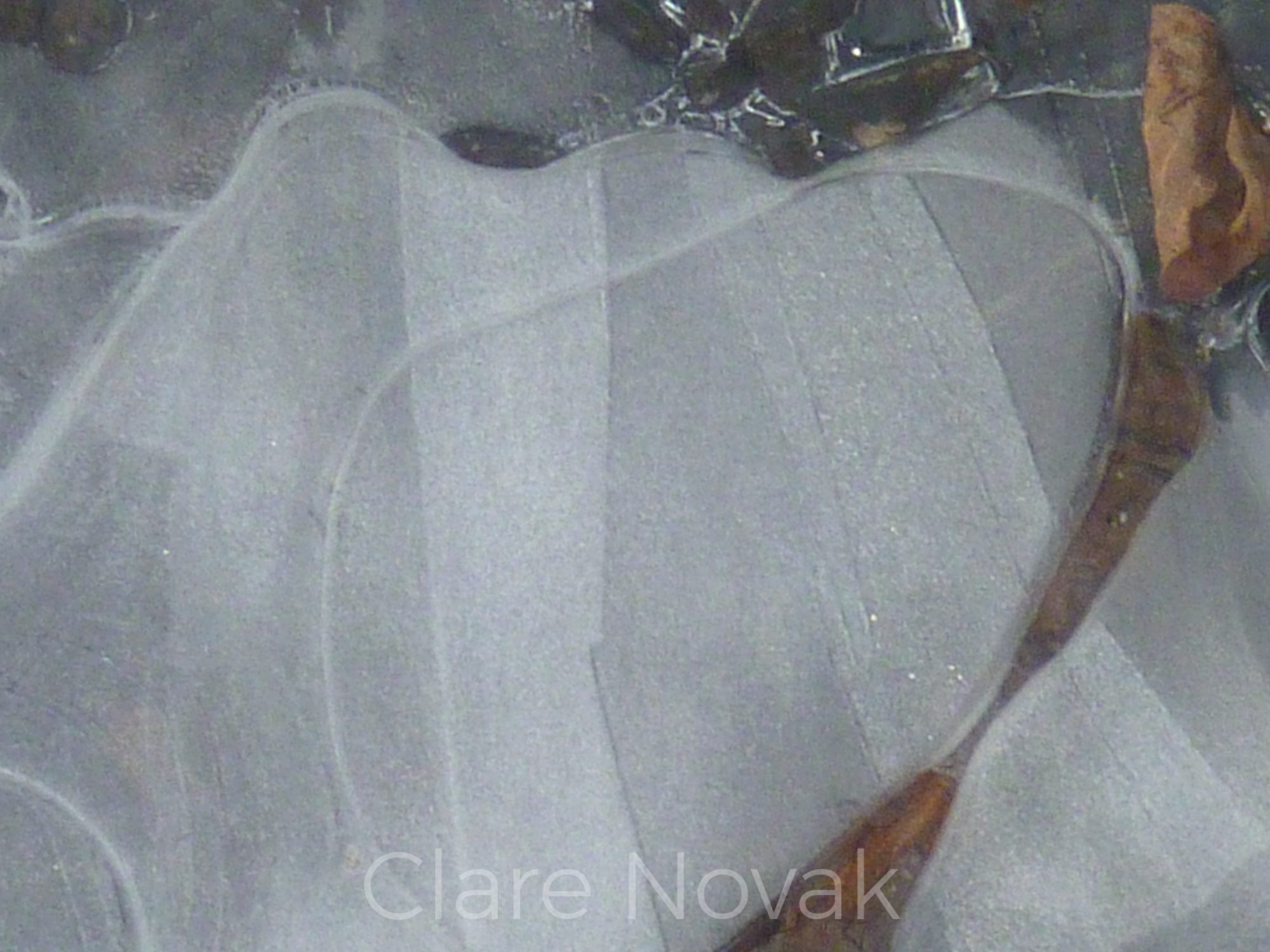 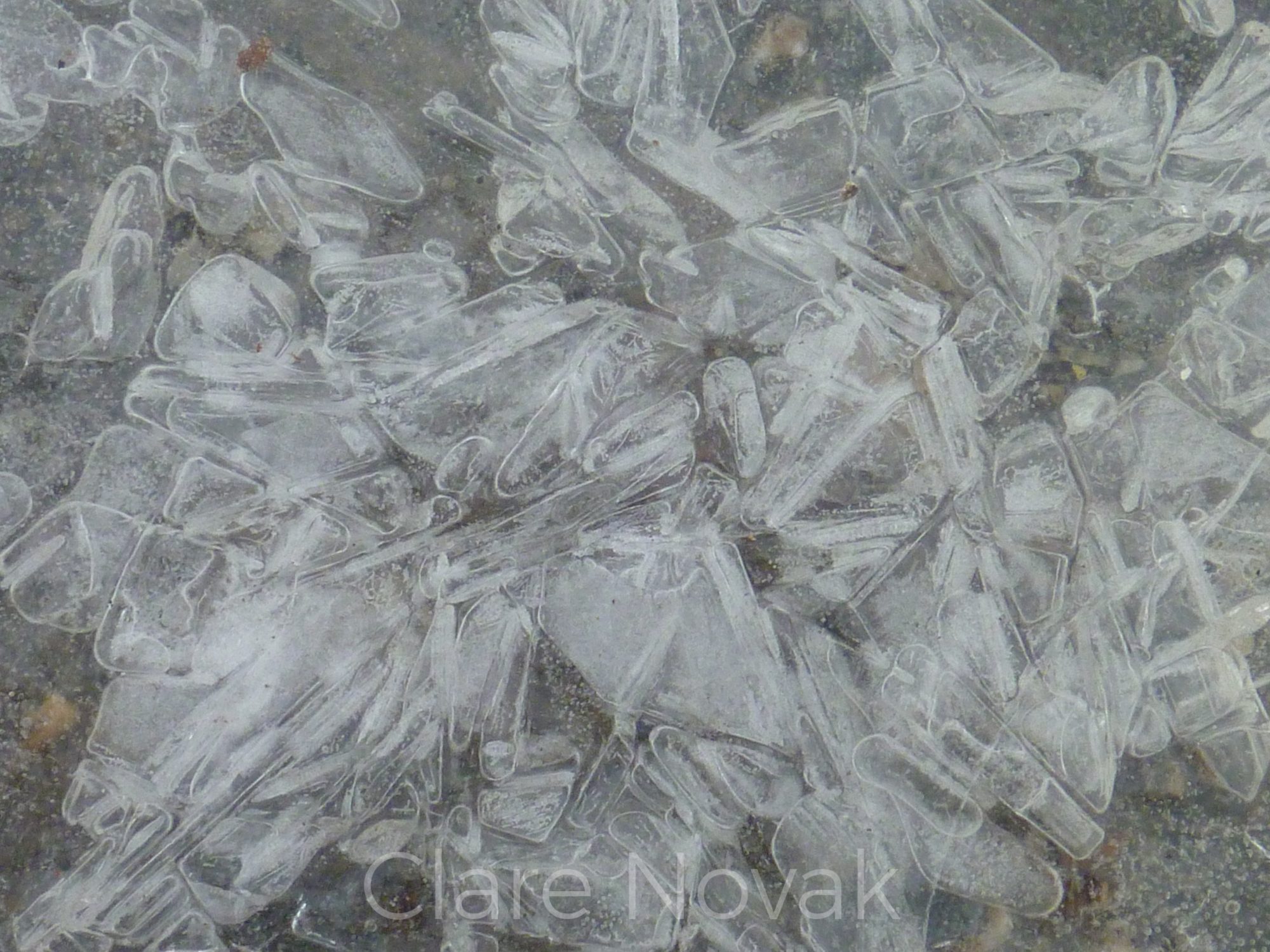 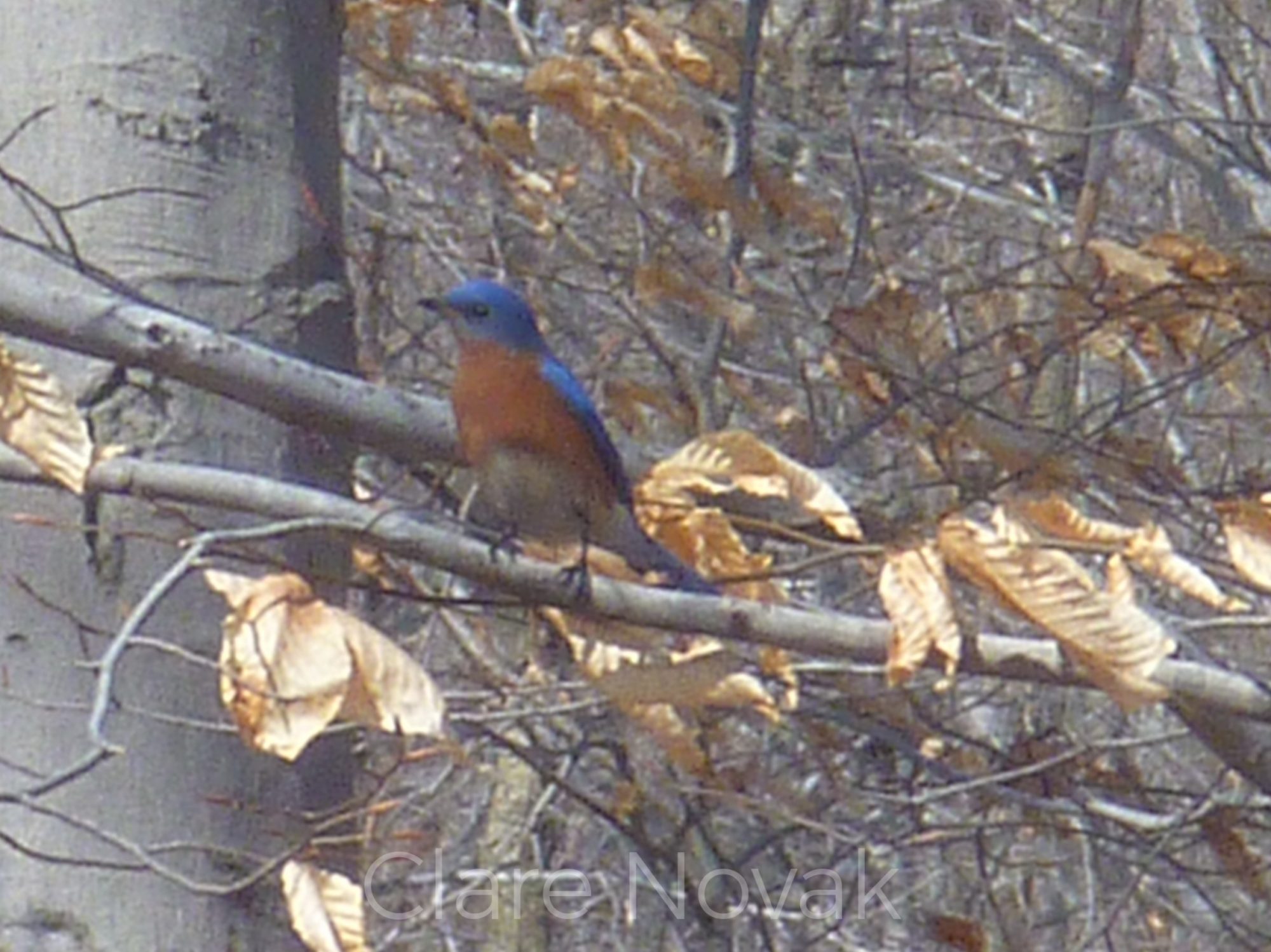 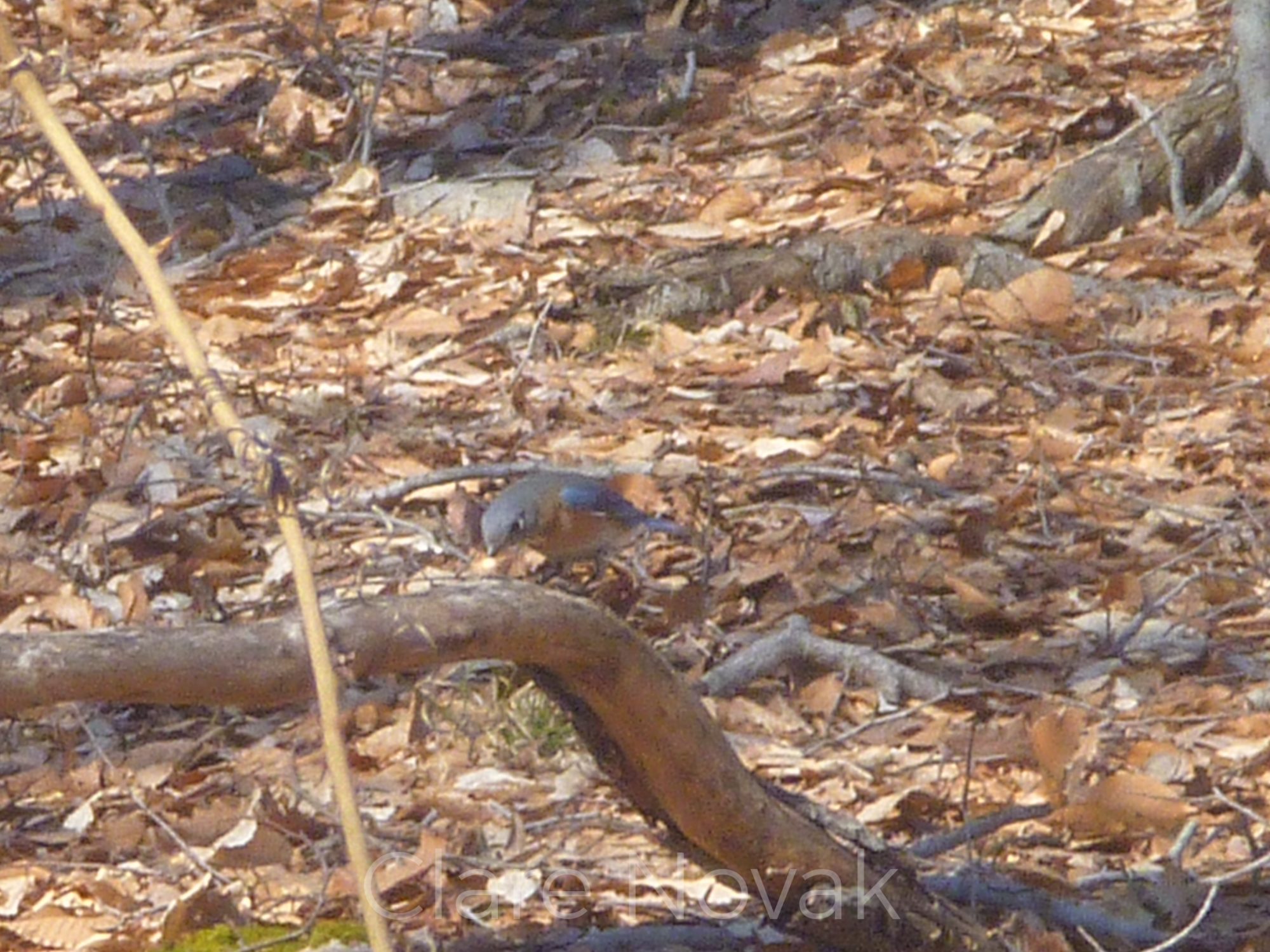 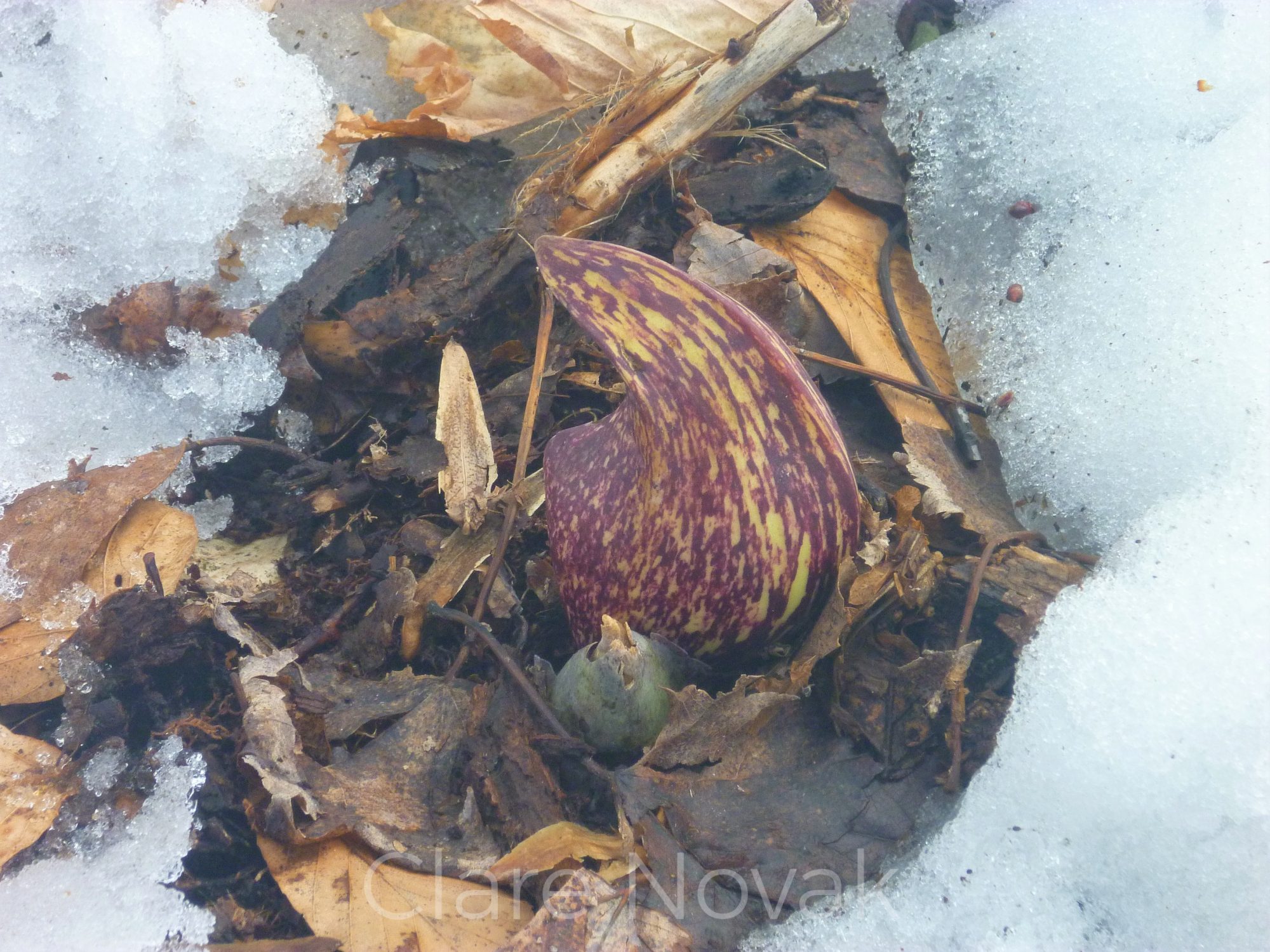 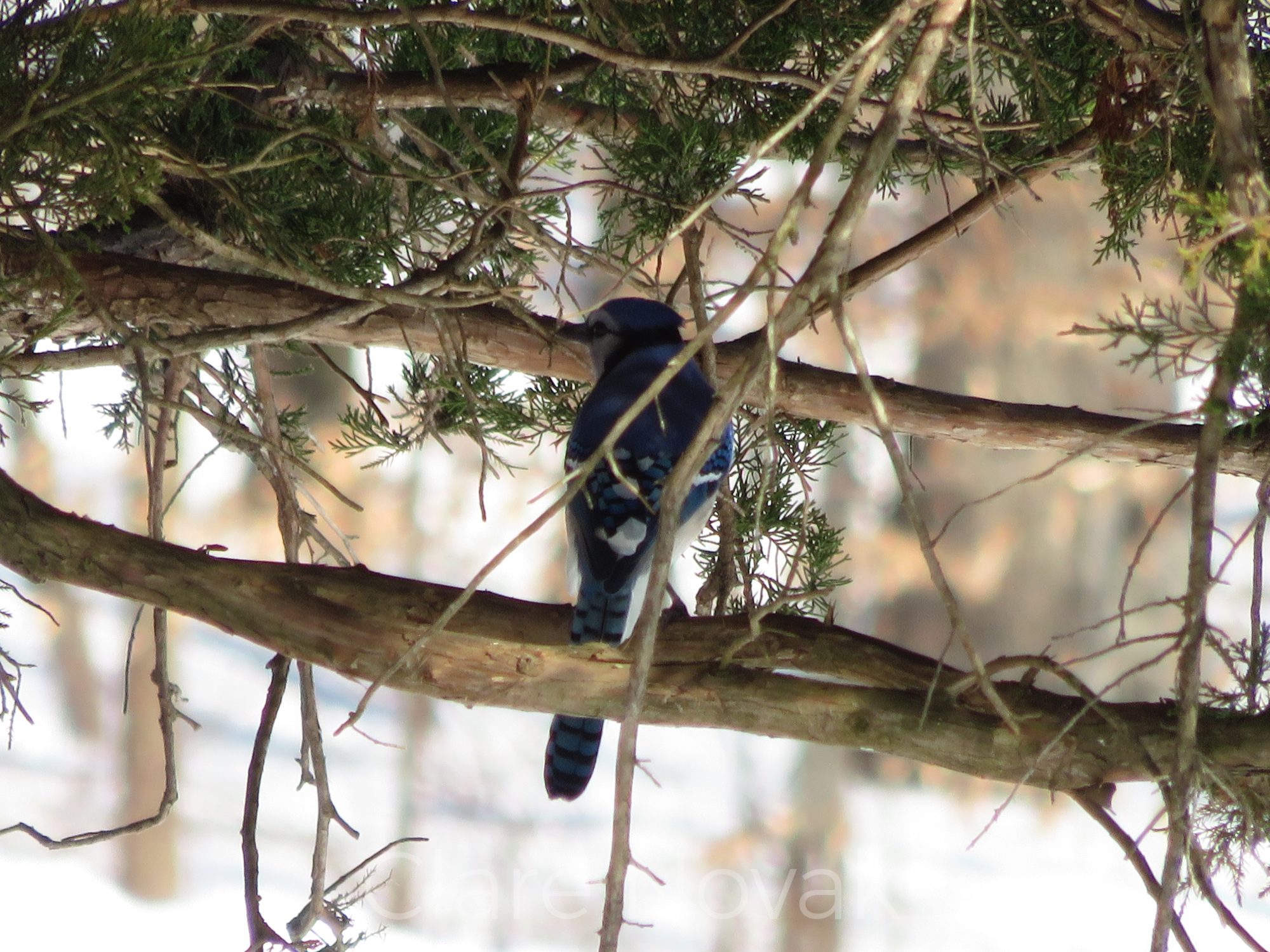 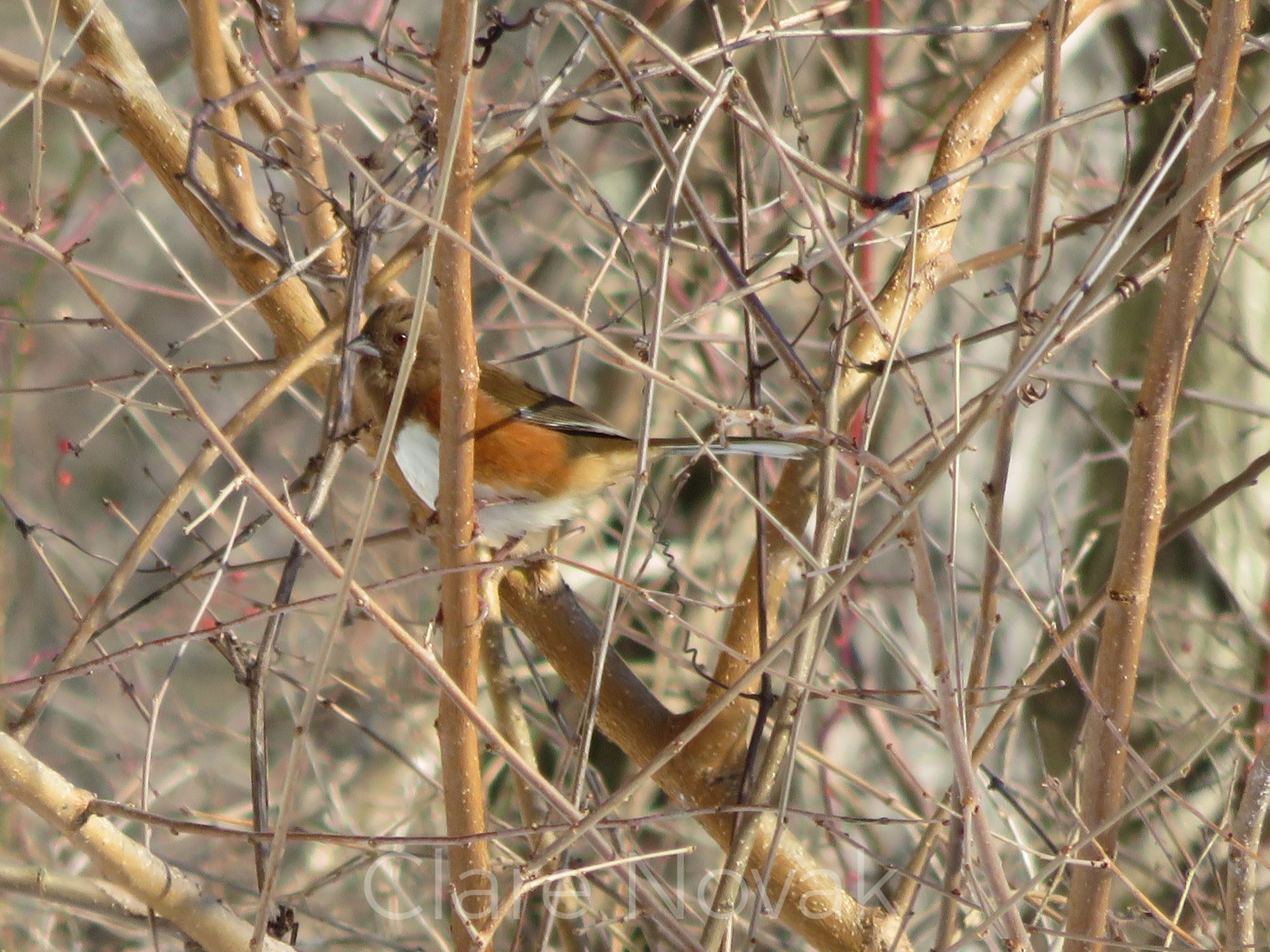 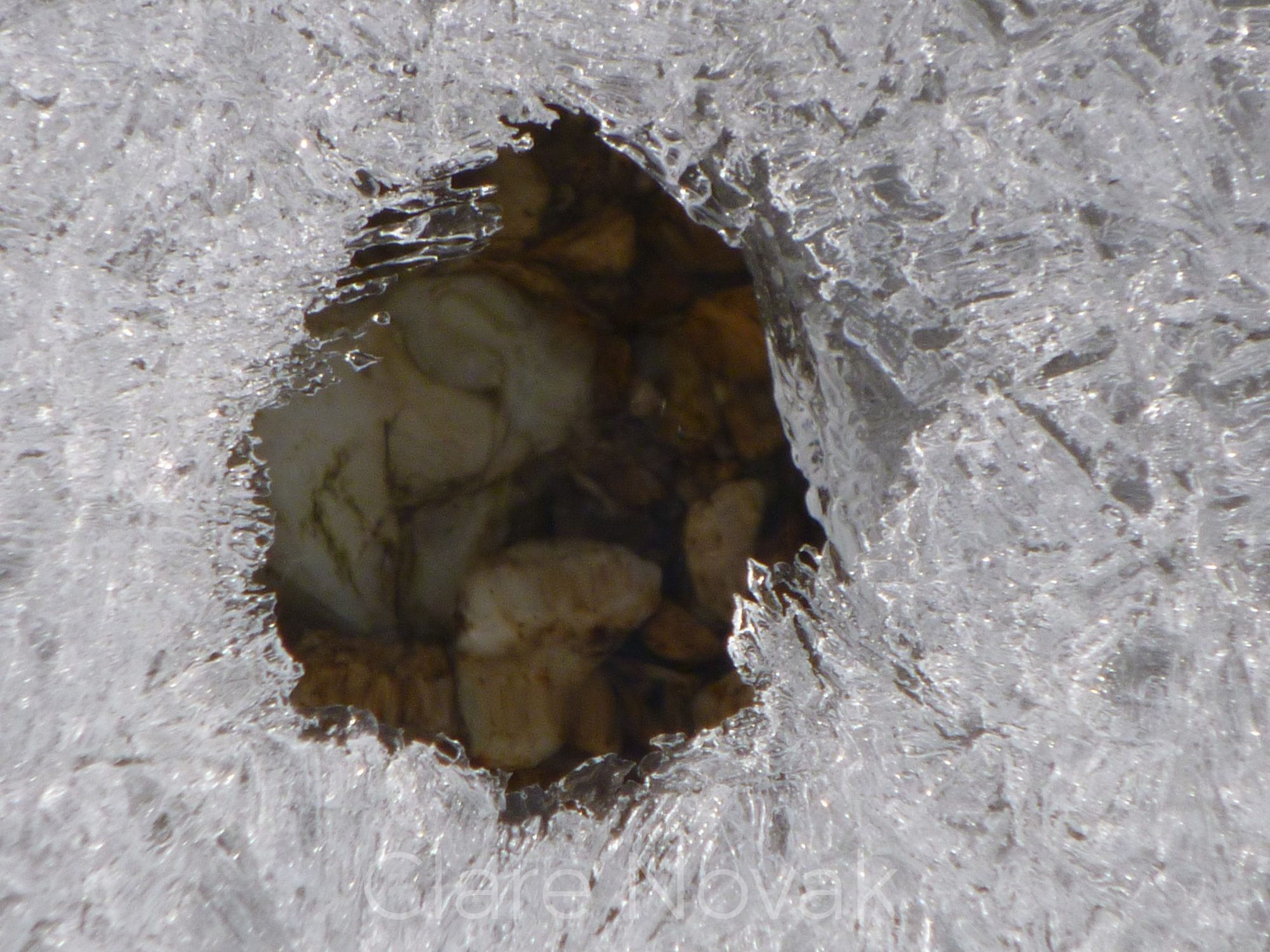 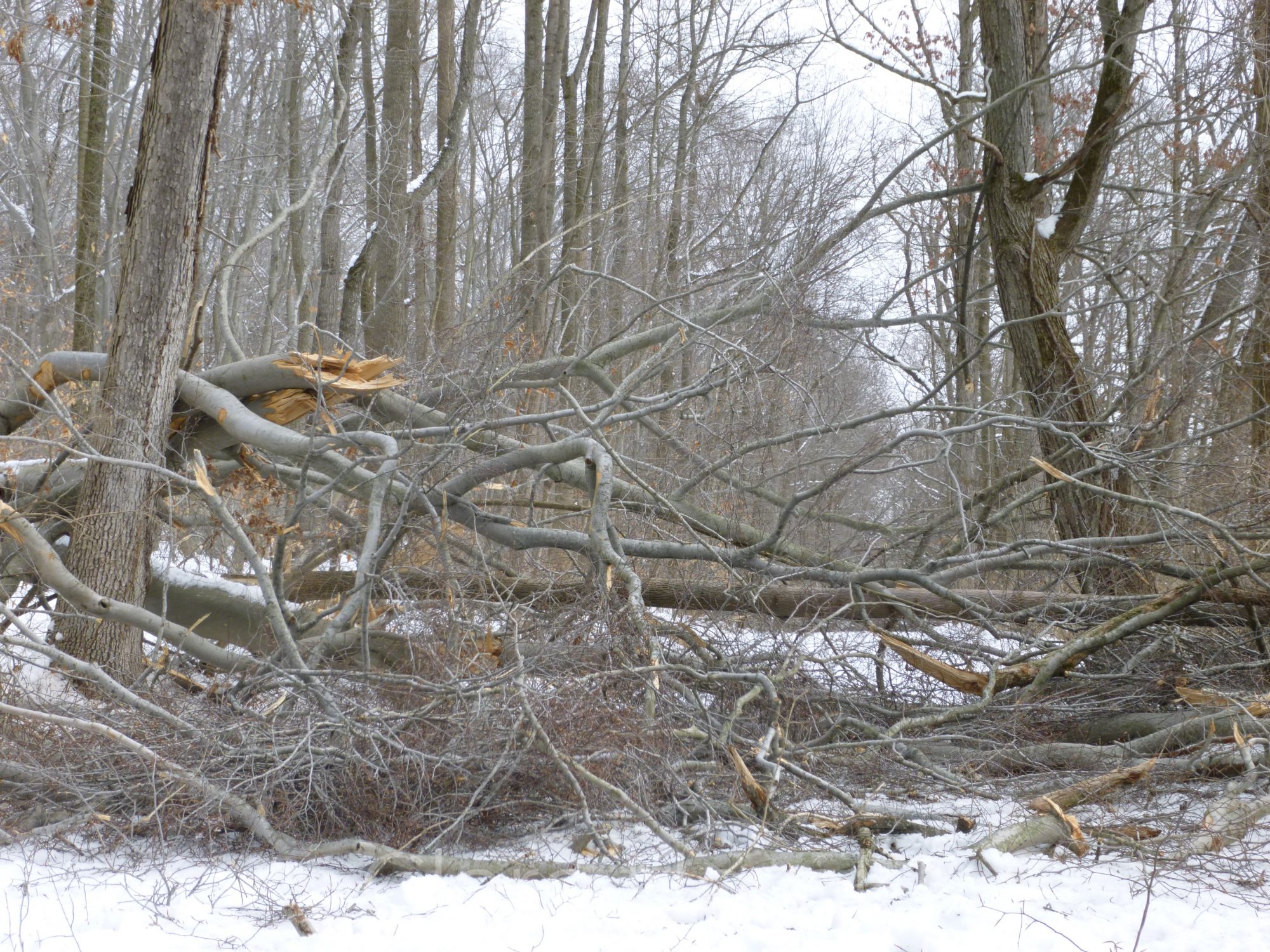 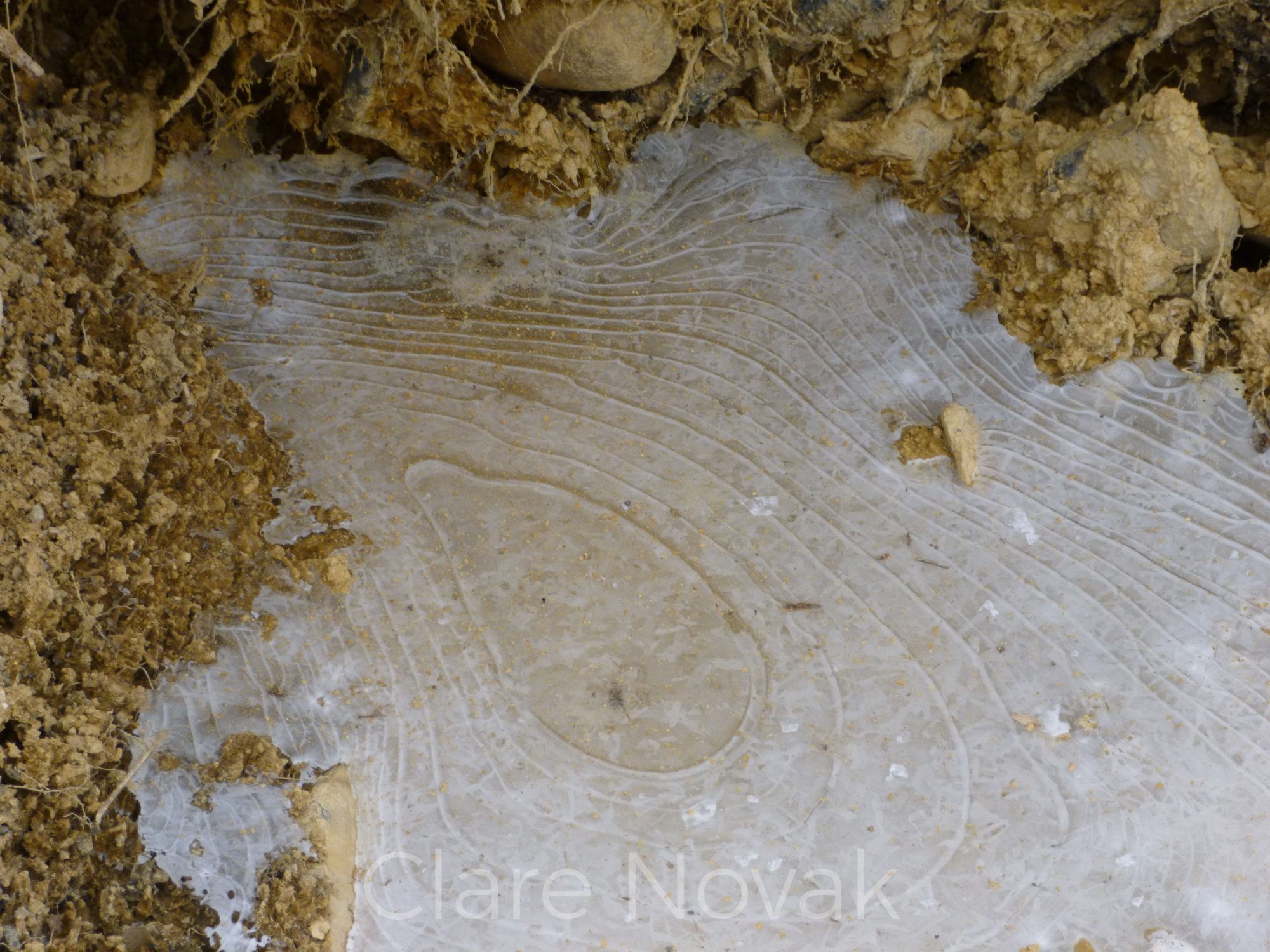 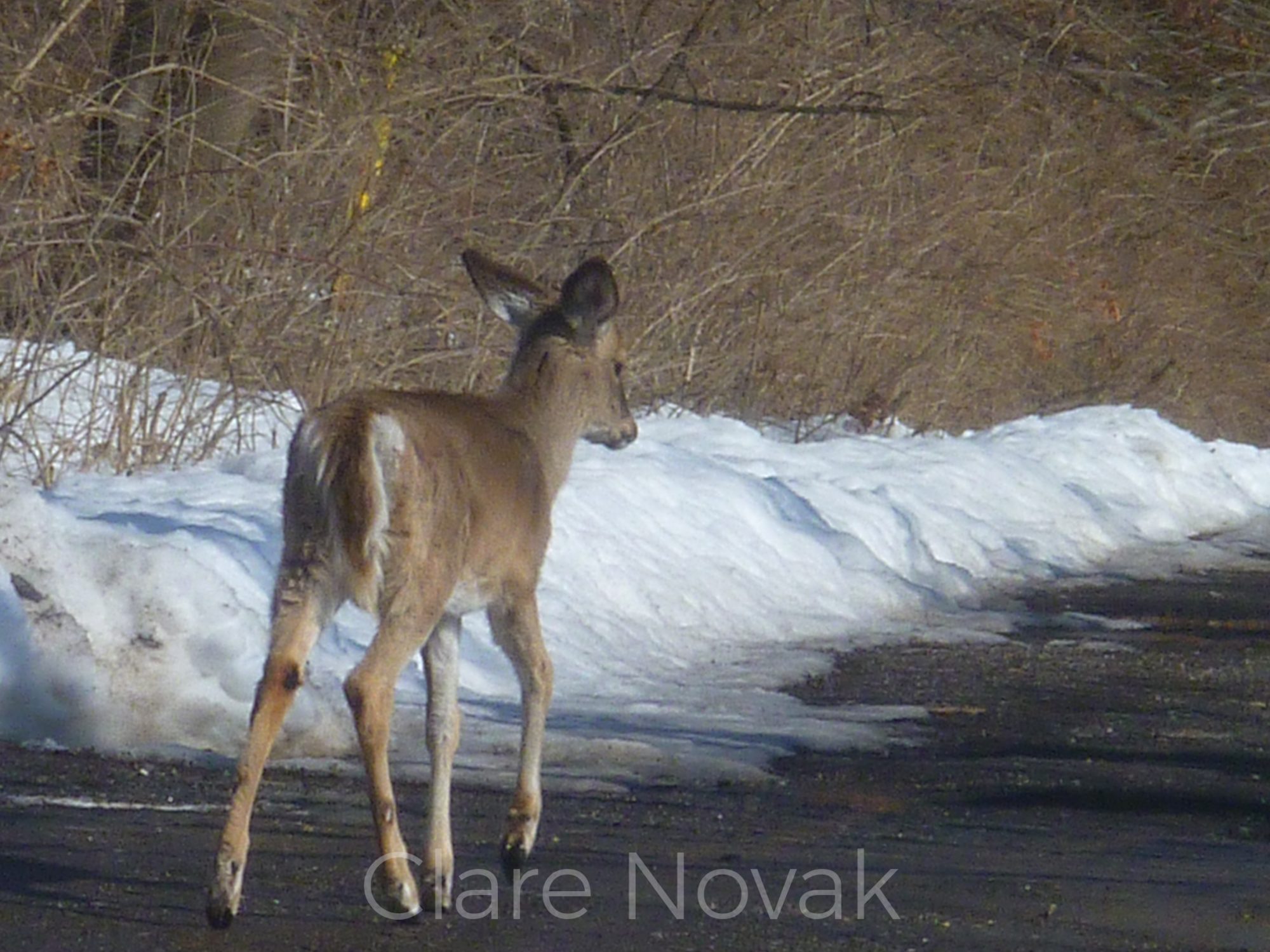 Off to the left, in the corner of my eye, I noticed movement as I parked the car. Looking more carefully, I spotted a doe browsing in the thicket. She noticed me as well. As we contemplated each other, I slowly took the camera from my pocket. Through the windshield, I took a few shots. She remained alert but didn’t run, so I opened the car door for more photos. Eventually she decided that she was unhappy with my presence and walked down the lane. As I took a step toward her, she broke for the field and ran a few hundred feet. As she turned to look at me one last time before fleeing, I got two more shots.

Later on my walk, as I turned off the gas line and into the woods, I saw the herd at the top of the hill. Eight, certainly, and as many as ten ran into cover. It was the first fine day above freezing we’d had in some time, so it was no surprise that they would be out browsing for food.

Because it was warm and the snow melting, I decided to take my usual walk rather than the path the snow shoe angel had lain. Only the deer and I had been through in places. The melting snow was less sure footing than the hard frozen snow of only a few days before. Puddles and snow melt streams reappeared. Bent saplings snapped up as they lost the weight of snow.

It was a beautiful day—deep blue, cloudless sky, warmth, and a brief reprieve.

Startled by the movement, I looked up and into the eyes of the doe. Distracted and lost among the thoughts in my head, I fumbled for my camera giving her plenty of time to melt into the woods. On the 9th, I’d seen the herd down in the corn field and so I’d been looking there. Of course, the doe was on the opposite side, in front of the Head Master’s house.

Once the deer pulled my attention that way, I noticed a skeleton on the steps. From the size and shape most likely a deer but I didn’t want to violate their privacy by stepping up for a closer look. I wondered if it were the deer a hunter wounded during the Christmas week snow. Two deer had been shot and I could only account for one dead. It would have been wrong of the hunter to leave a wounded animal.

There was little change in the look of the woods. It was white snow, blue sky, blue shadow. Freezing and thawing created interesting patterns in the ice covering small pools of melt water–bubbles, drops, waves, crystals, fractals and glass. Leaves and grasses frozen beneath were held in stasis, neither growing nor decomposing until warmth returned. Those not frozen beneath were trapped in a half way world both above and below the ice. The edges of the ice formed round the leaves caught the light—a delicate frame for a decaying star.

Walking in the snow while wearing only a fleece, was an unexpected pleasure. Though the wind blew hard, it was an unusually warm day for February. The birds seemed to enjoy it as well. Hundreds of Canada geese covered the cornfield for they could finally browse easily. Sudden warming turned the snow to slush and the ground to mud.

Warming brought out the bluebirds as well. Several pairs flitted in the trees near the farm road. I snapped quickly, hoping for a good shot or two. A little extra luck allowed me to get both the male and the female before they decided I was a menace and darted away.

In search of the elusive trail at the top, I cut up the water main line and for a while walked a path on the border between yards and woods. The woods up there were marred by the detritus of human living. Some of the trash in the woods was forgivable as a result of the exceptionally high winds this week—a broken Styrofoam cooler, plastic bags, beer cartons. Other trash was not forgivable—the grass catcher, fan, toys, hub caps. Least forgivable was construction debris—lumps of concrete, pvc pipe, paneling. All these things were from the houses at the top. If you were to drive by them, the fronts of the properties would be impeccably tidy. Here in the back, some made use of the woods as if it were their private waste bin.

Disgusted, I turned my back on the houses of the hypocrites and headed downhill. As I did, the white tails of the deer announced their departure as well. What struck me most today was the quiet. After days of roaring winds, the mere puffs of a breeze were silent and stealthy.

As I crossed the pipeline, bright blue and red blankets were caught in the branches of a fallen stump. These at least, I could understand. If I lived there, I too would take a blanket into the woods at night and curl up to look at the stars. Only a few feet further on was a camo blanket. If you pack it in, pack it back out, please.

March 4, 2011 Calendars and clocks are such arbitrary things. The woods in early March look no different from the…