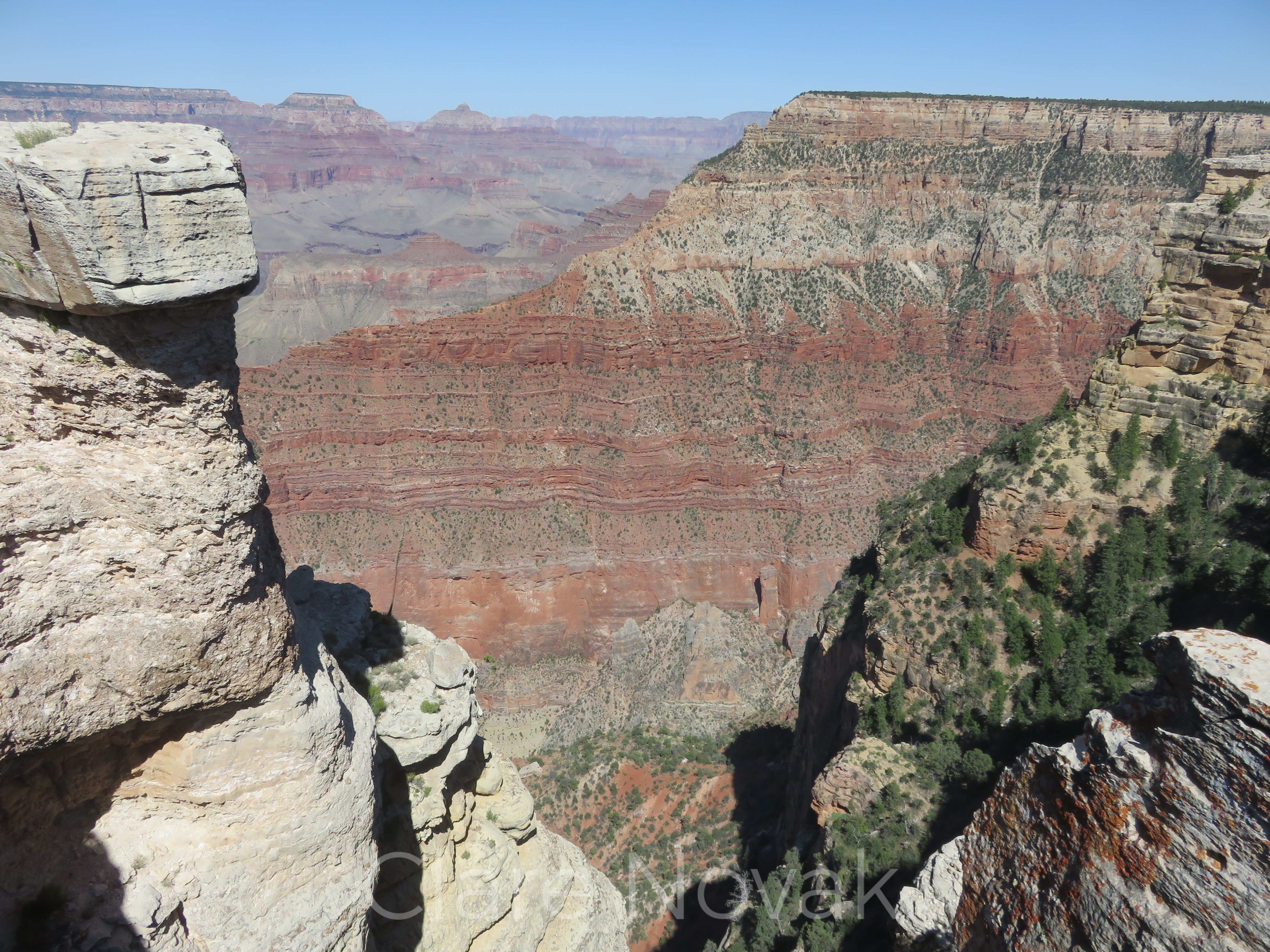 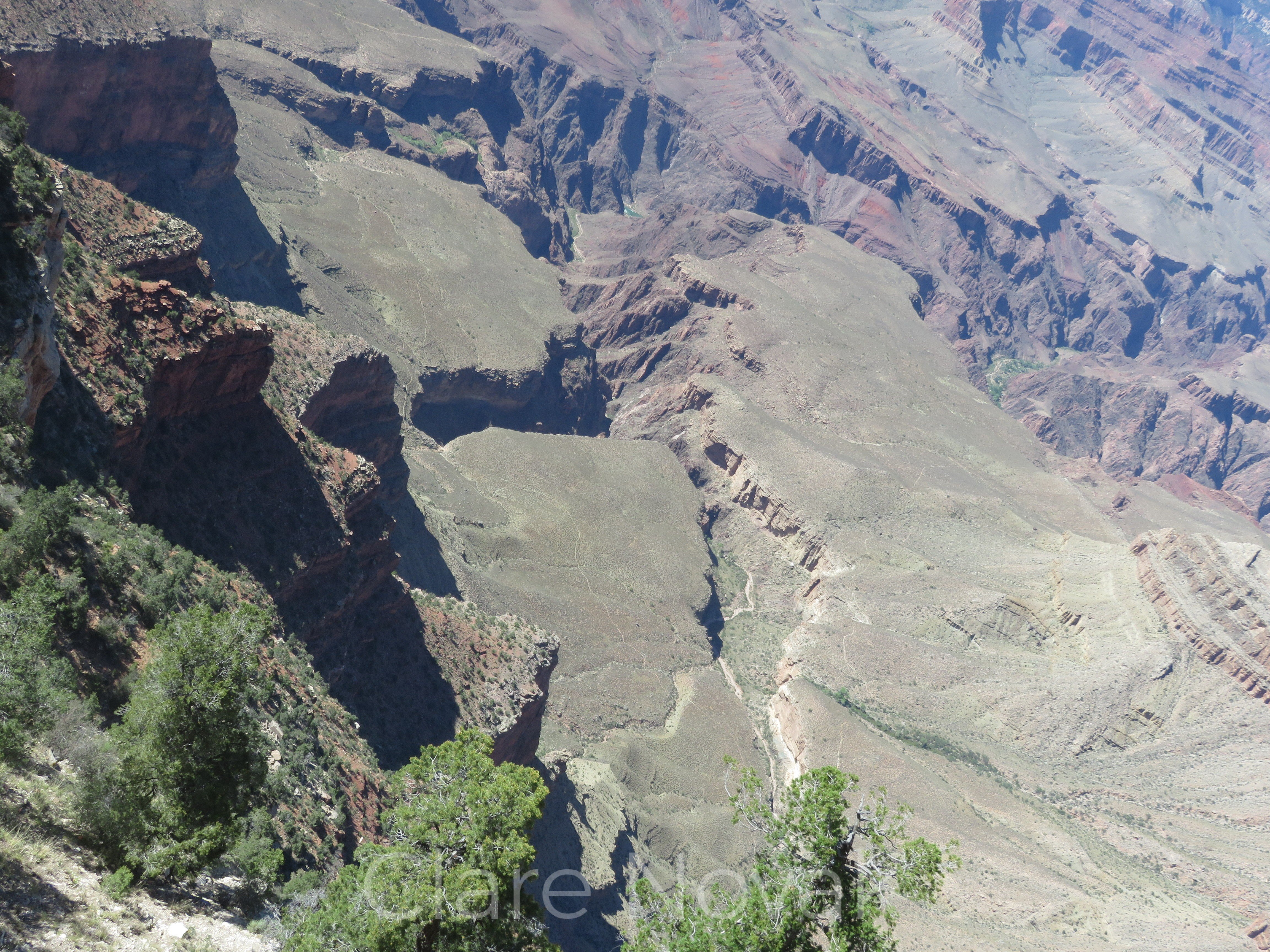 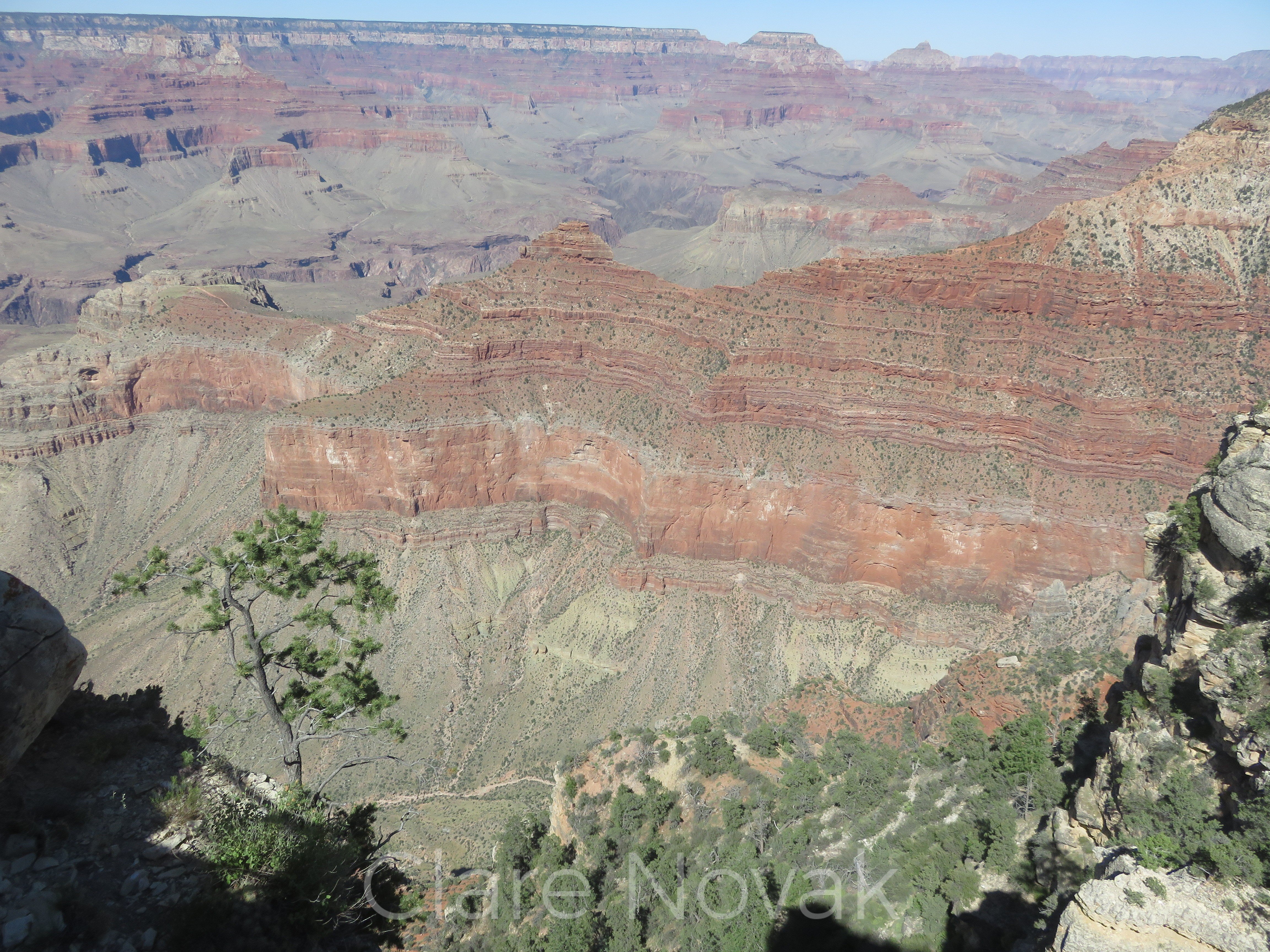 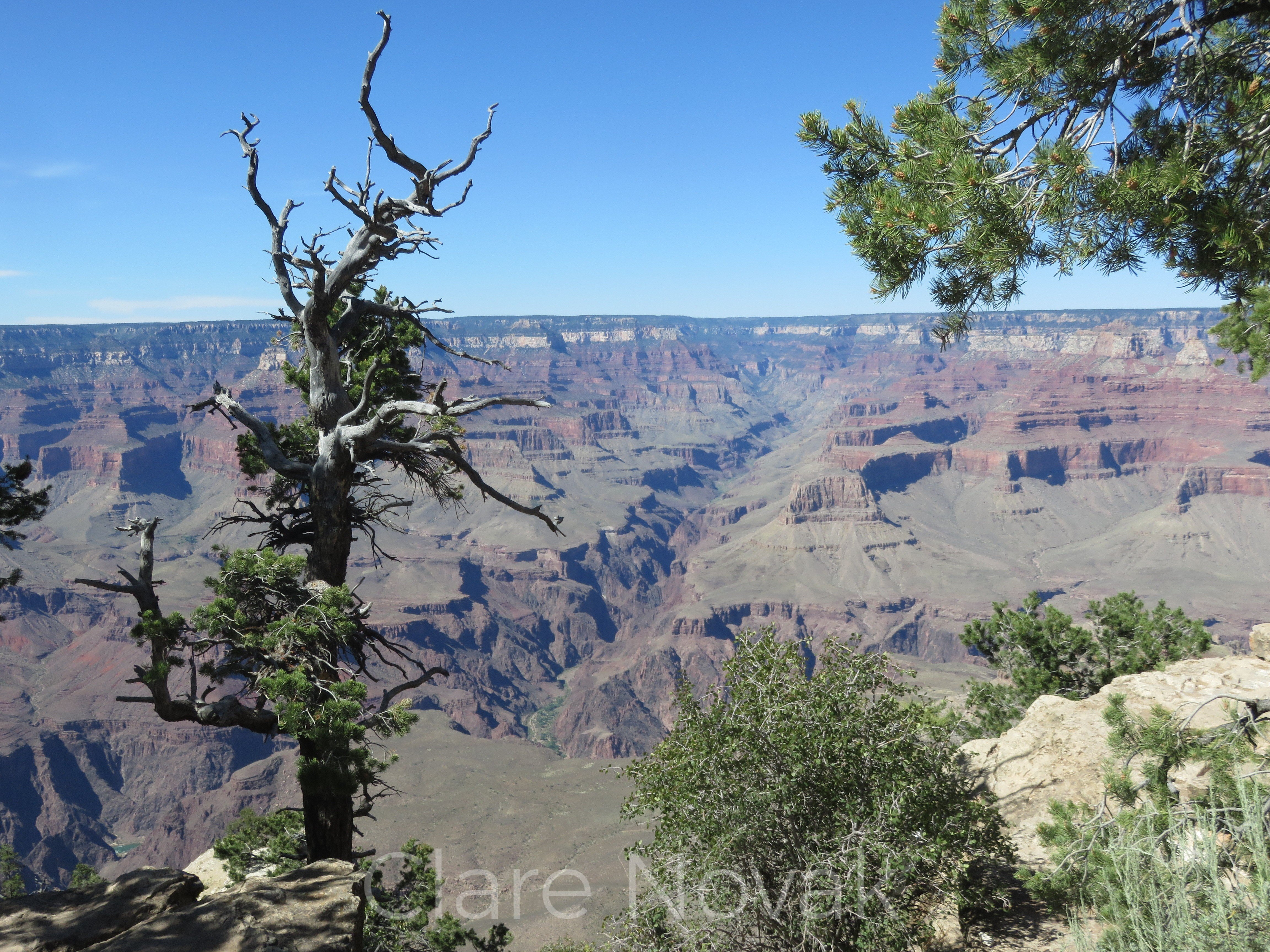 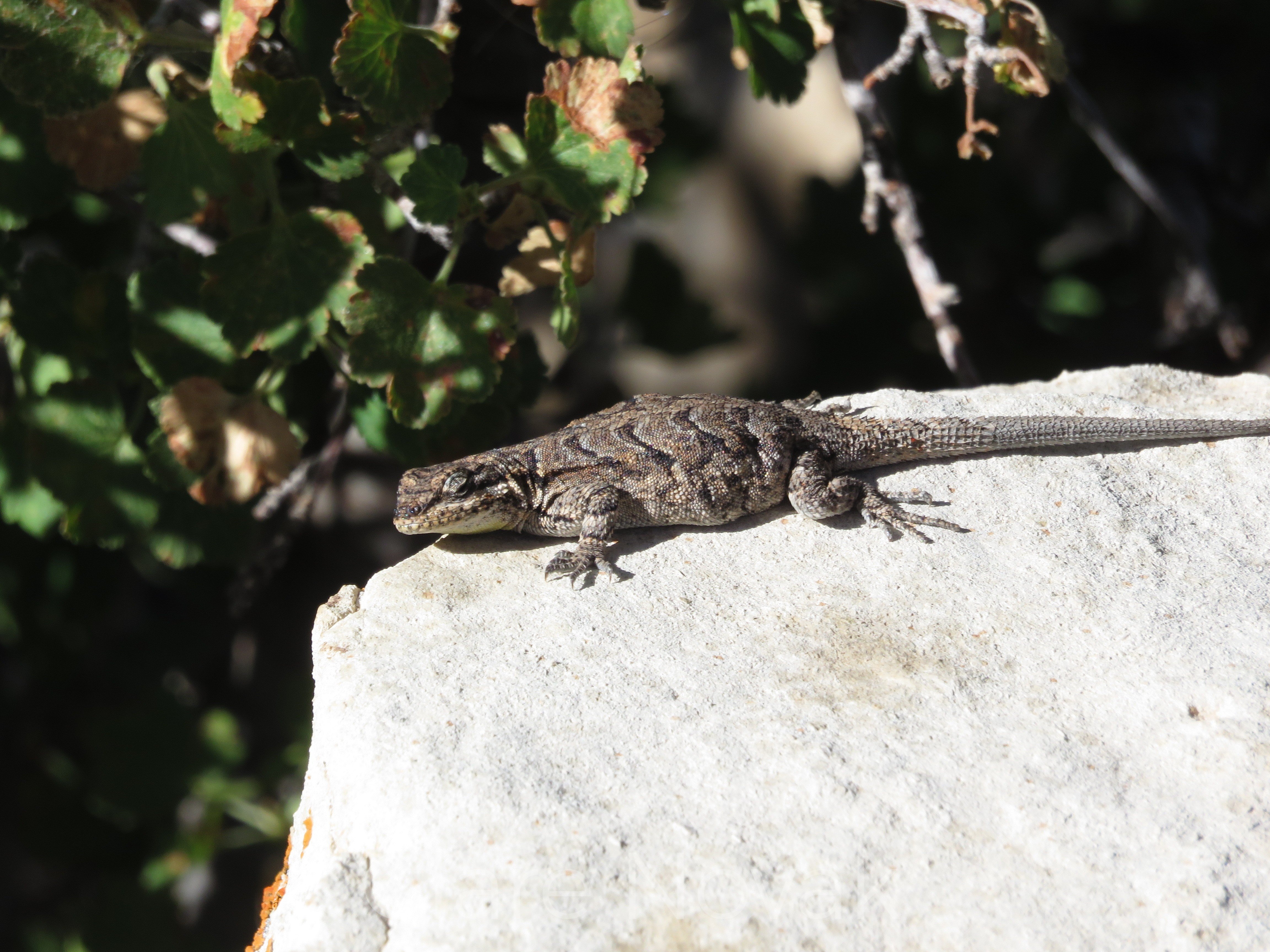 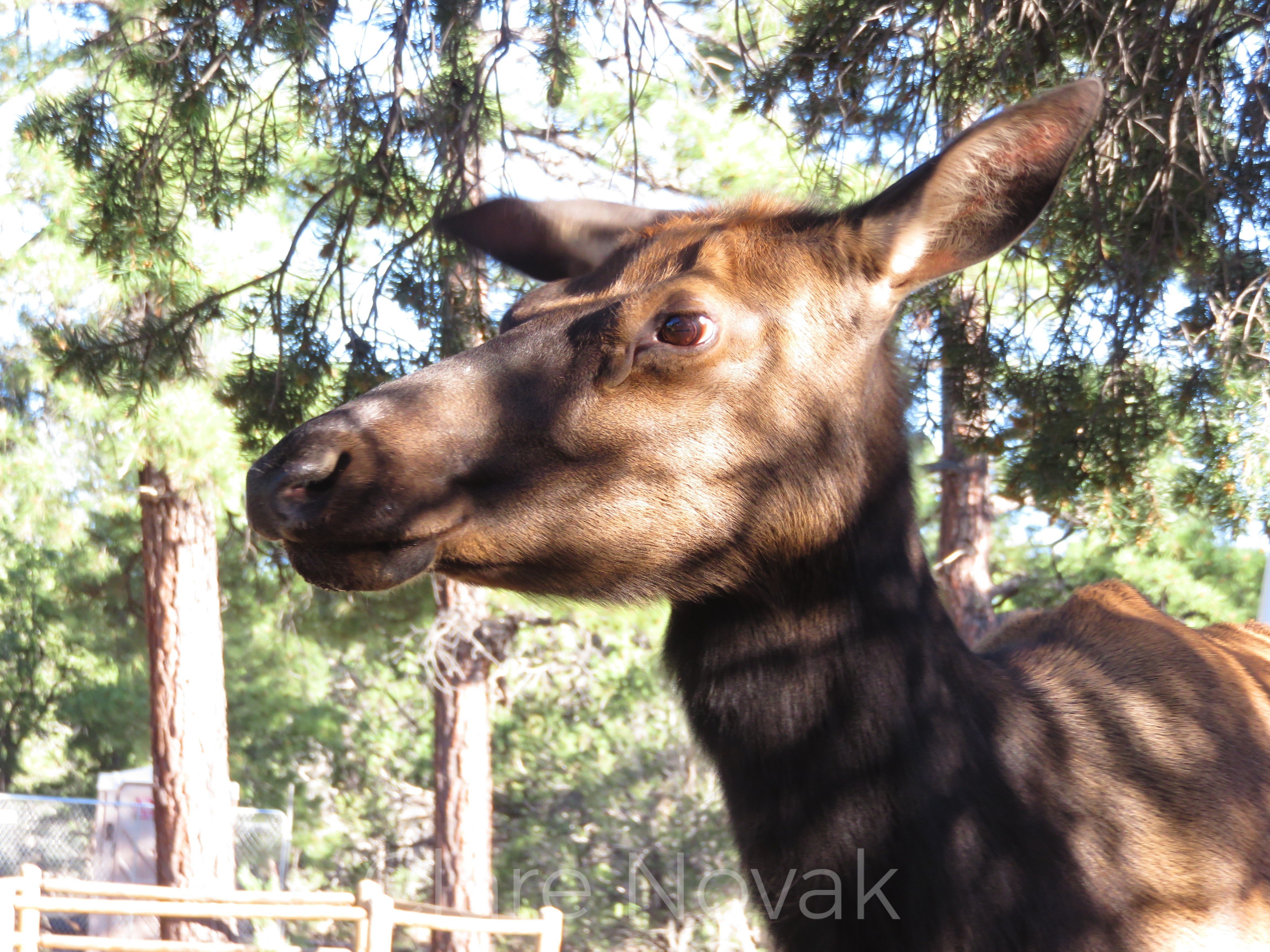 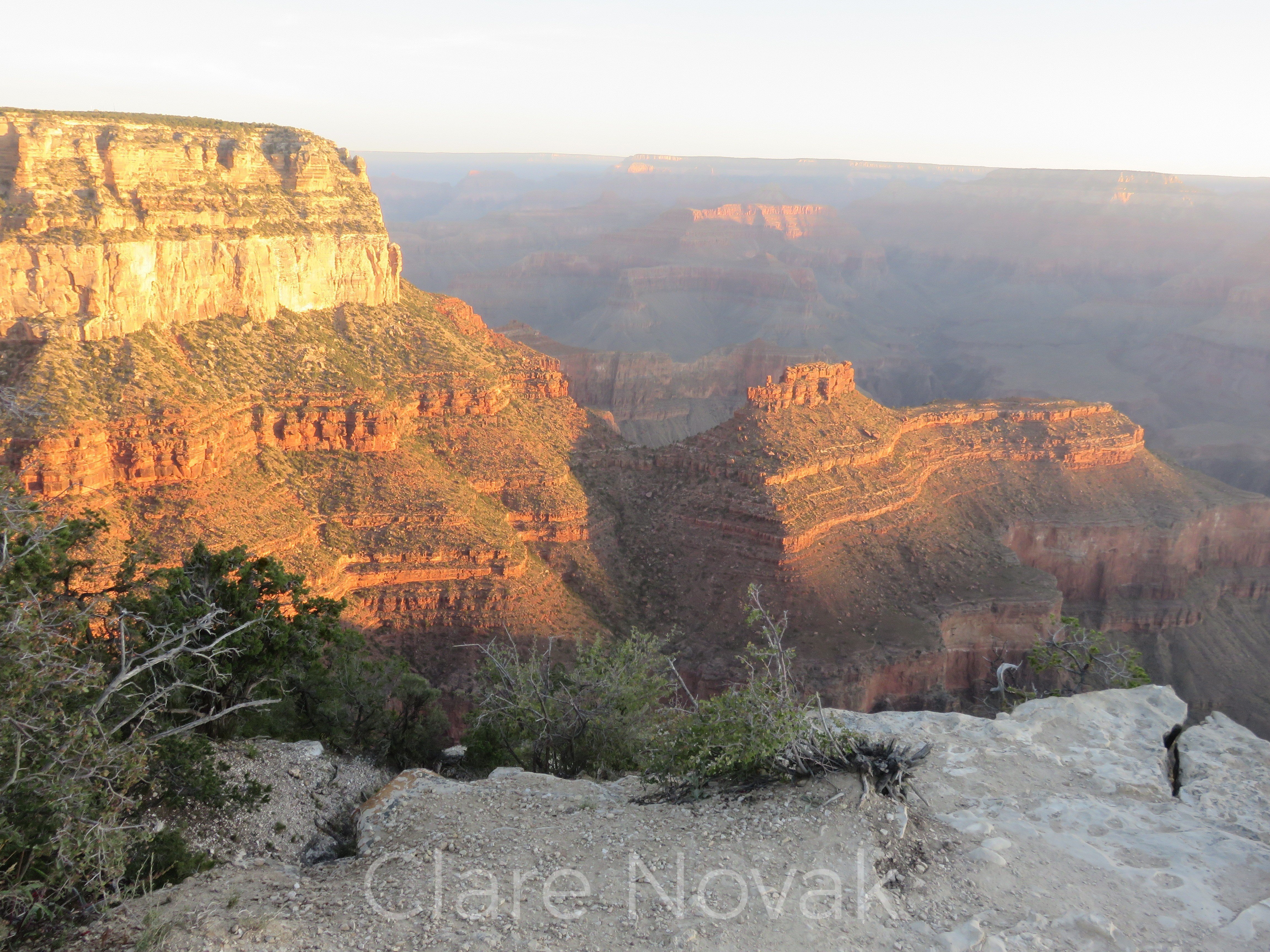 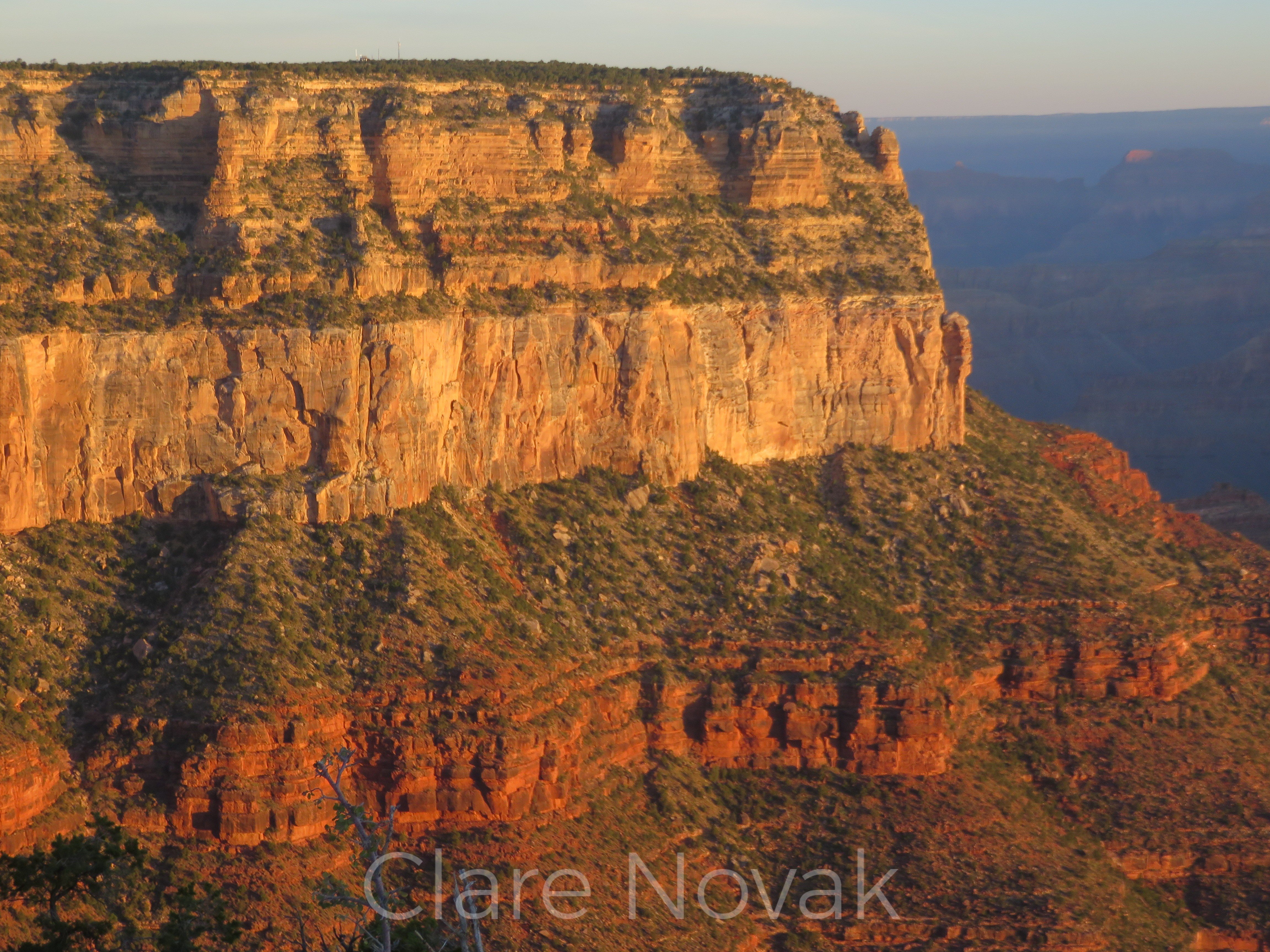 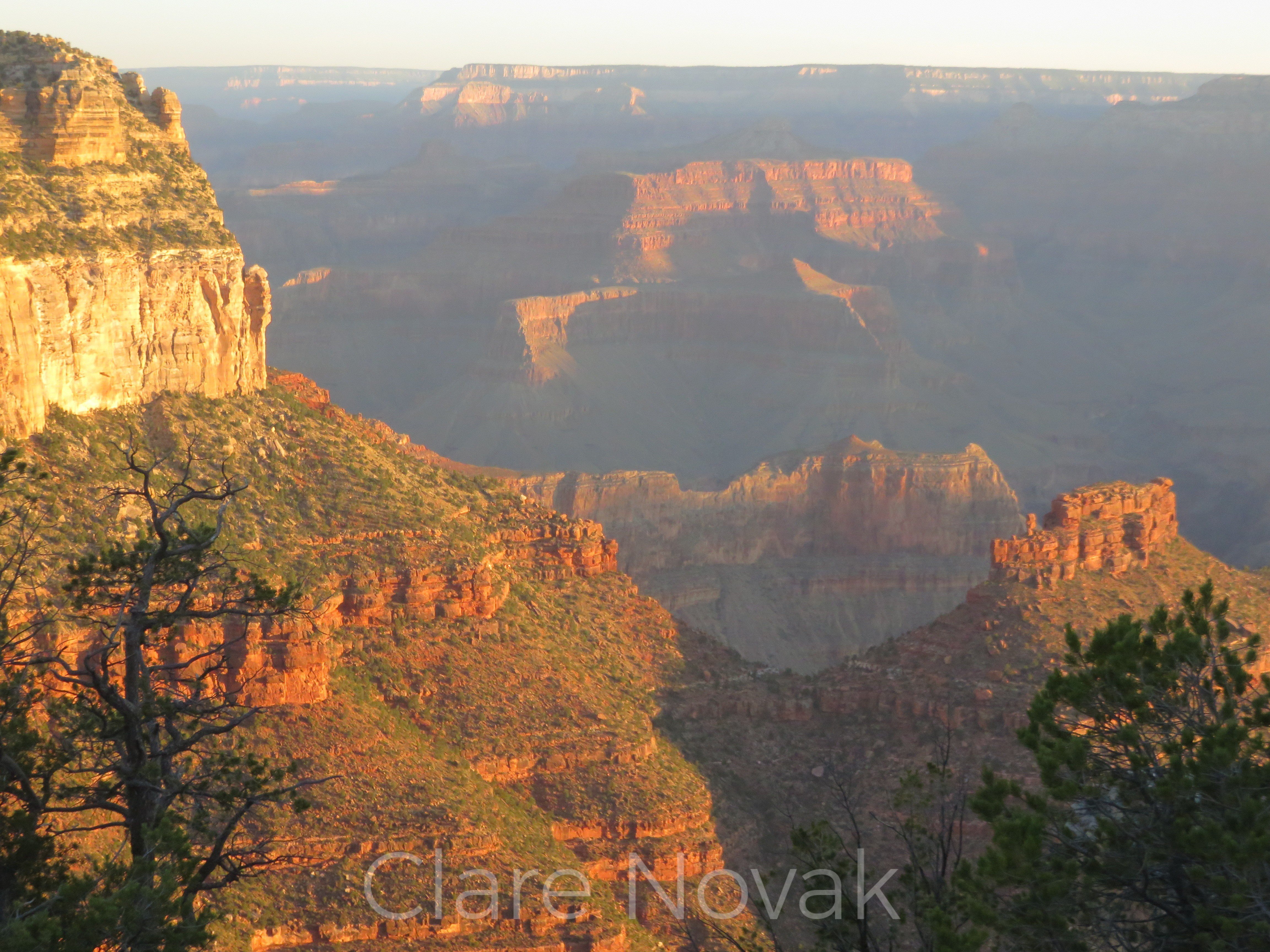 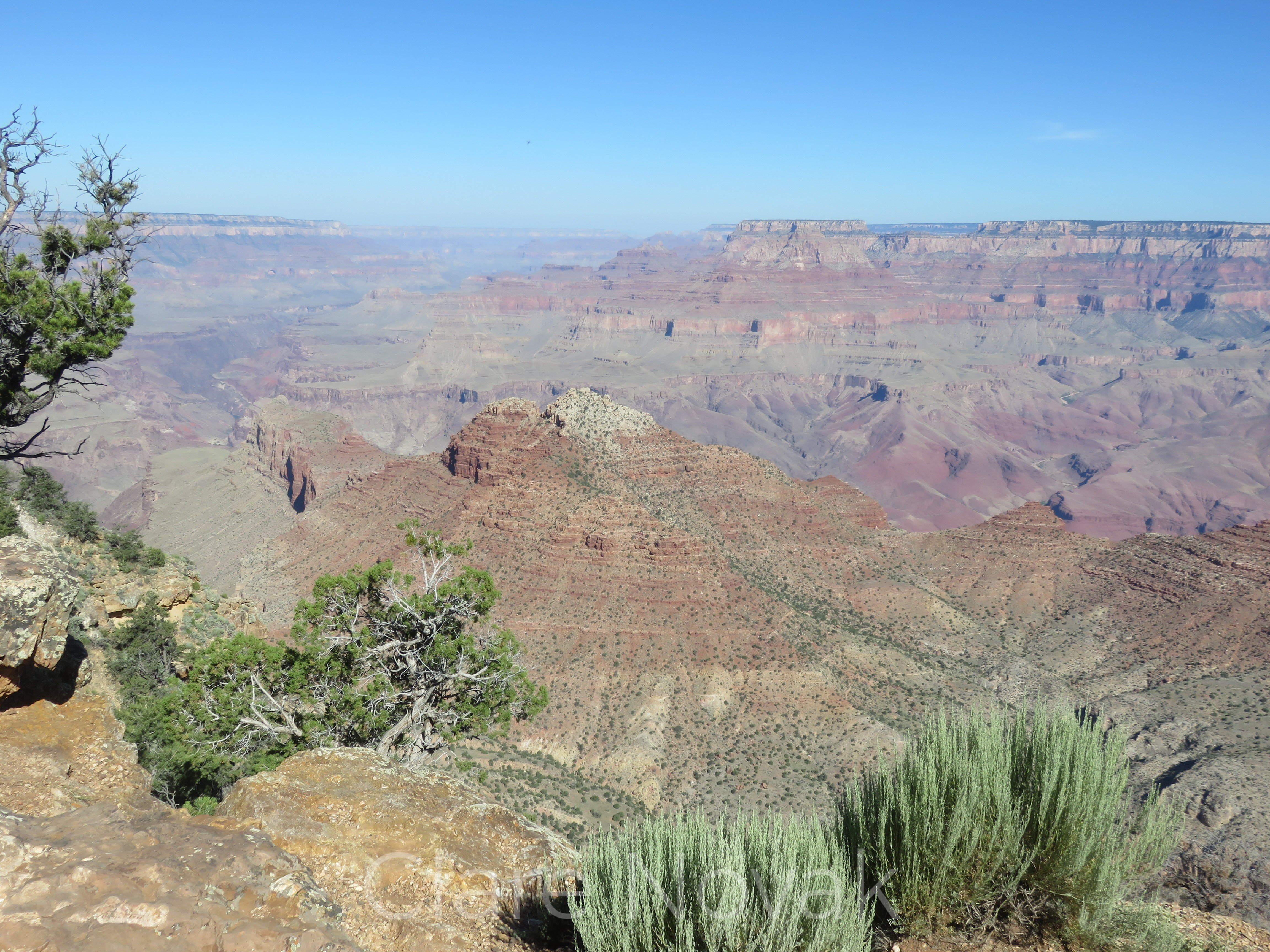 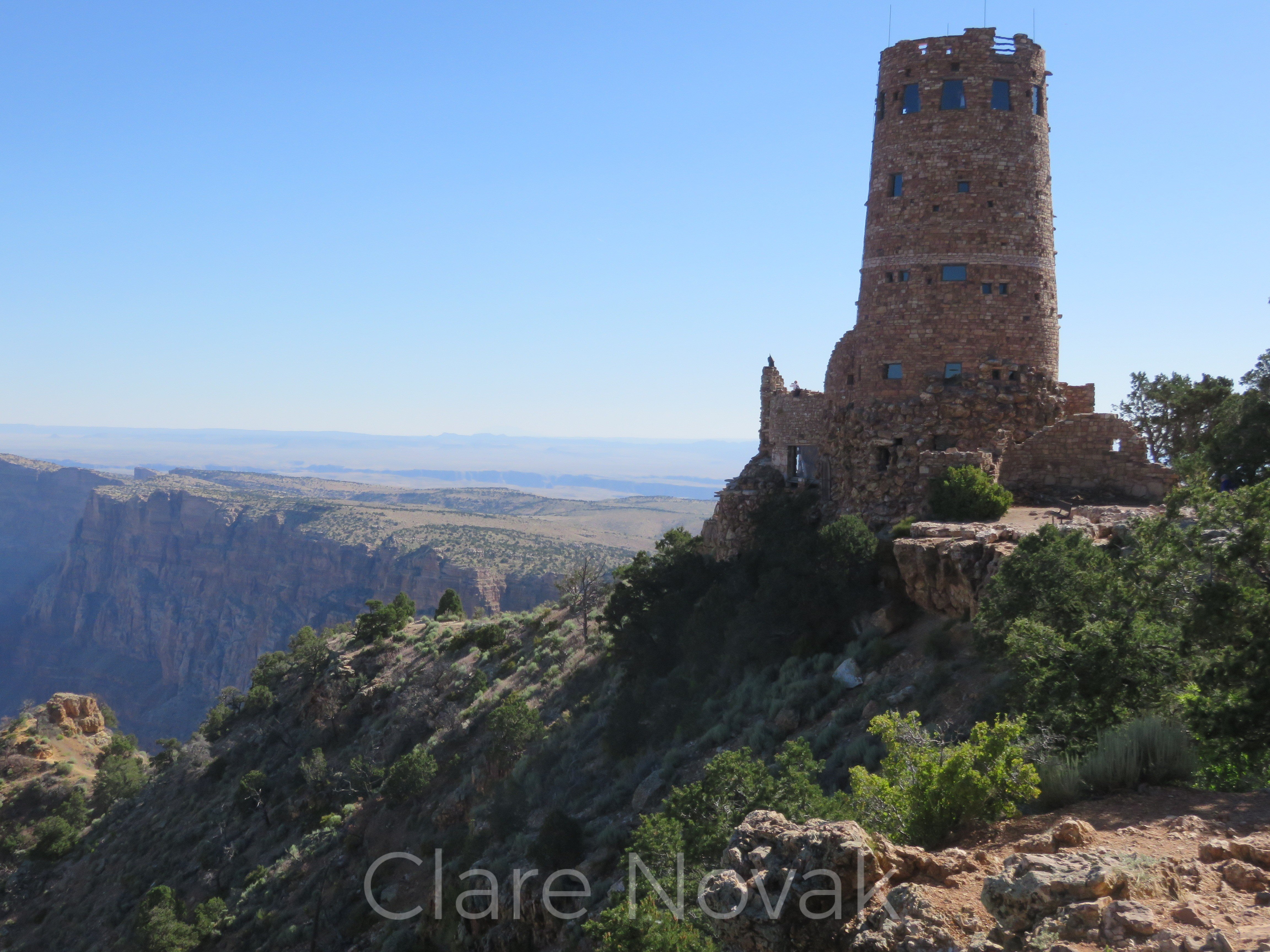 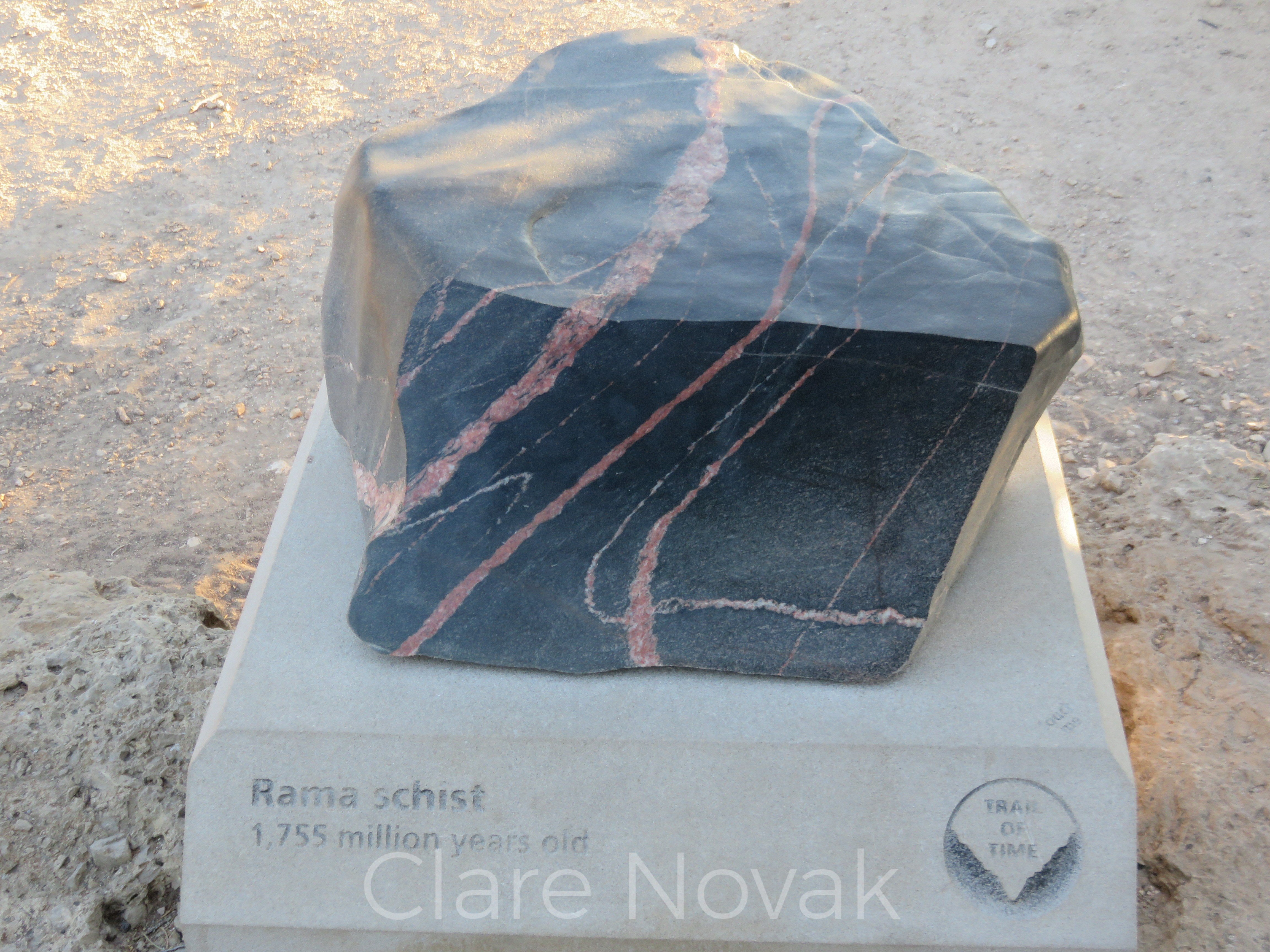 Readers, the Grand Canyon is the first in a series of National Parks from a recent trip. If you wish to follow the back story, part 1 is below and part two under Monument Valley

Be present. Be silent. If you open your mouth, imp words and stupid sprites will tumble out. Be humble. Before you is all of earthly time. Walk down the years and know you are but a speck that the earth swats away as carelessly as you do a gnat.

Water and wind played with stone; they joined hands, circling in rhythm.  Together their play made beauty and they laughed. It was good. The million years’ game plays on, slowly sculpting until wind or rain happily bat a stone that goes tumbling down. Stone is stone and does not mind the new place it might land. Stone is whole even in pieces. You, little gnat in time, be silent and see. Look and love the playful beauty of time.

Be silent and the deer who regards you in the morning light will walk away rather than run. The jay will continue to pick at the ground and the lizard sun itself. The sunrise walk to breakfast is the opportunity to stray away from the crowd, to surround yourself with space and have a silent mind. With a quiet mind the enormity of time seeps in as you behold the Rama Schist of 1,755 million years of age.

If the enormity is too much, take refuge in a memory. Fred and Wilma Flintstone take a vacation to the Grand Canyon and see a stream small enough to step over cutting just a few inches down in the rock. Fred puts his arm around Wilma and says, “Well, some day it will be great.” They took a photo to show they, “knew it when.”

This has been the vacation of three stories. One story is a series of unfortunate events, the second story, “if it’s Tuesday it must be Belgium” and the third story the wonder and awe of winning your heart’s desire. As for unfortunate events, the inauspicious saga began with a driving line of thunder storms that proved a menace to every schedule. My niece and I traveled together and we awoke at 4:30, left my house at 5:30 and arrived at the airport at 6 am, those same storms had wreaked havoc. As we were checking in, we learned our flight was cancelled. The gate agent was surprised, looked at the board and said, “Not another one.” Indeed, the airport had been shut down the night before due to rotational winds and schedules had completely broken down.

Try as she might, the agent could only put us on standby for the 3:30 pm flight. Oh, hooray, a day at the airport. Scratch the trip we planned to Hoover dam. Come the 3:30 flight, there were 49 passengers on standby. We crossed our fingers and they called 23 and 24, Kristie and I. As we started to board, they said, “Oh sorry, only one of you.” I pushed Kristie down the jet way with a hug and waited for the next flight.

Kristie’s flight sat on the runway for nearly an hour. In the meantime, the flight I was now on standby for was held because the crew, coming from a Miami flight, was delayed. Eventually, they gave up on that crew and called in a new one. After a 2- hour delay, I thought I’d be 1st on the standby list, based on the previous flight. Au contraire, somehow, I had dropped to 9th.  But I did eventually board and we did eventually leave.

Unbeknownst to me, she was at the Vegas airport waiting. Her luggage was on my flight. The agent told her the option was either wait or the luggage would be delivered next afternoon. As we had a 5:30 am departure from the Golden Nugget, next afternoon was a non-starter.  With only a Starbucks in the baggage area, and unable to get back to the gate area, Kristie went without dinner. By the time I arrived, we collected her bag and found transport to our hotel. It was nearly 2 am Vegas time Oh joy, oh rapture.

The second series of unfortunate events started on the road to Moab. The bus was leaking power steering fluid and the driver was topping it up as we moved from park to park. When we made it into Moab, a “new” bus was waiting for us. A better option than going forward without power steering. The second bus lacked amenities like cup holders and seat pockets, making for some cranky old people. Day two, with bus two, the air conditioning didn’t seem great. Leaving Salt Lake City, the AC was even weaker and people at the back of the bus smelled both something burning and the toilet percolating.

We stopped at Great Salt Lake and Bonneville Salt Flats for photo ops and potty breaks. The facilities were so filthy at Bonneville Salt Flats only the truly desperate used them. Neither site was particularly interesting. After our lunch break in Wendover, Utah/Nevada, the ac gave up the ghost and we had several hours’ drive in desert heat to the Trails Interpretive Center because “our rooms would not be ready yet” at the hotel. The Center was quite nice (and air conditioned) but we arrived a bit past 4 and they closed at 4:30. It would have been nice to have more time there. The outdoor air was more pleasant than the bus and several of us joked about walking the remainder of the way to our hotel in Elko. We assumed another bus would be brought in and, as bus quality had declined with each bus, we about the next bus being yellow.

I wrote this sitting out on the concrete slab masquerading as a deck outside our room. This is a hotel/casino and smoking is allowed. Supposedly smoking stays on the casino floor but as we all know smoke travels. We woke to find, not a yellow bus, but our first bus awaiting us in the morning. For the remainder of the trip, that bus seems to serve.

There is no finer way to spend an October afternoon than a walk in the woods. In my search for…

It was my birthday present to myself, a weekend camping trip. With borrowed gear stowed in my Miata and the…