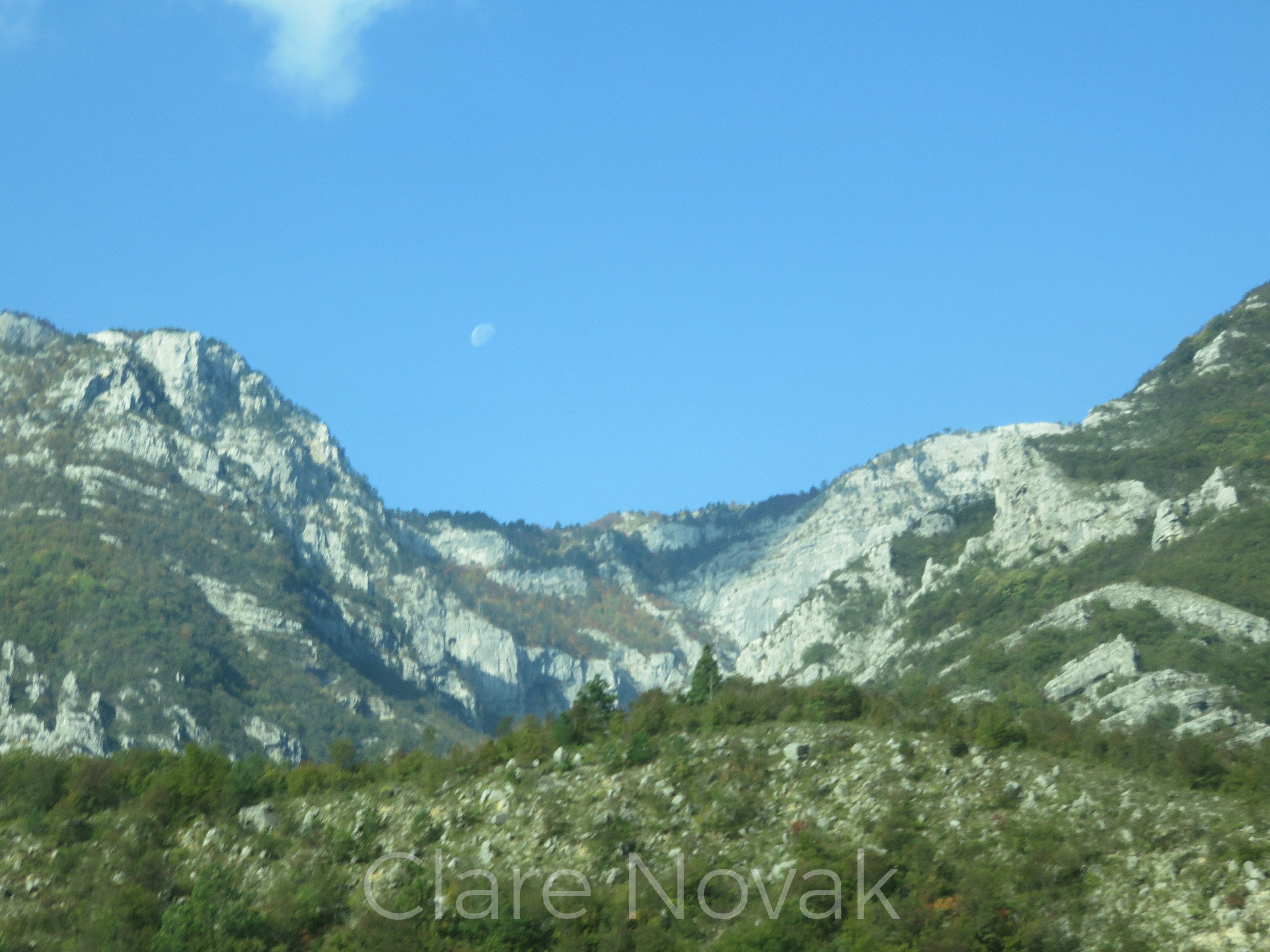 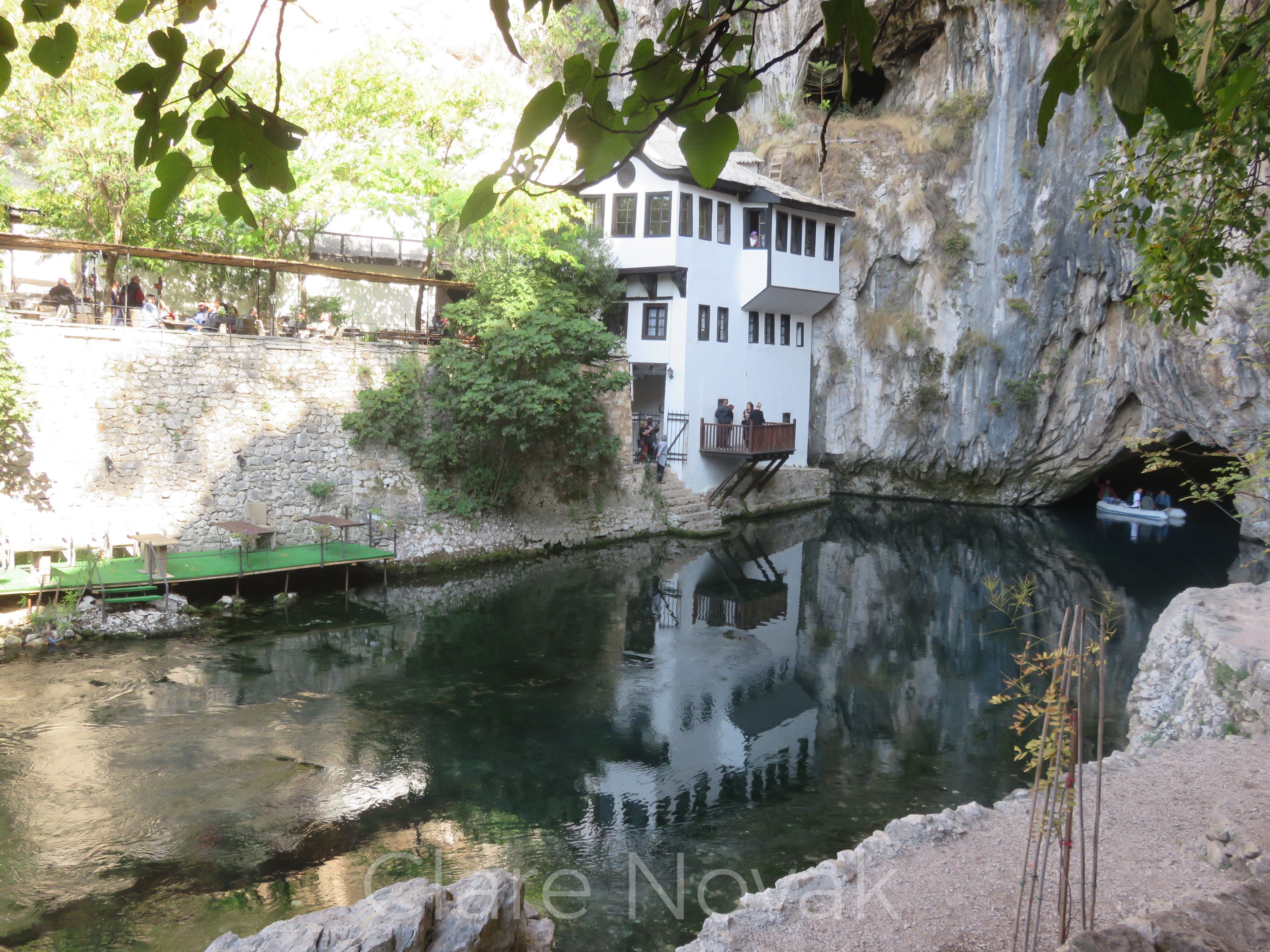 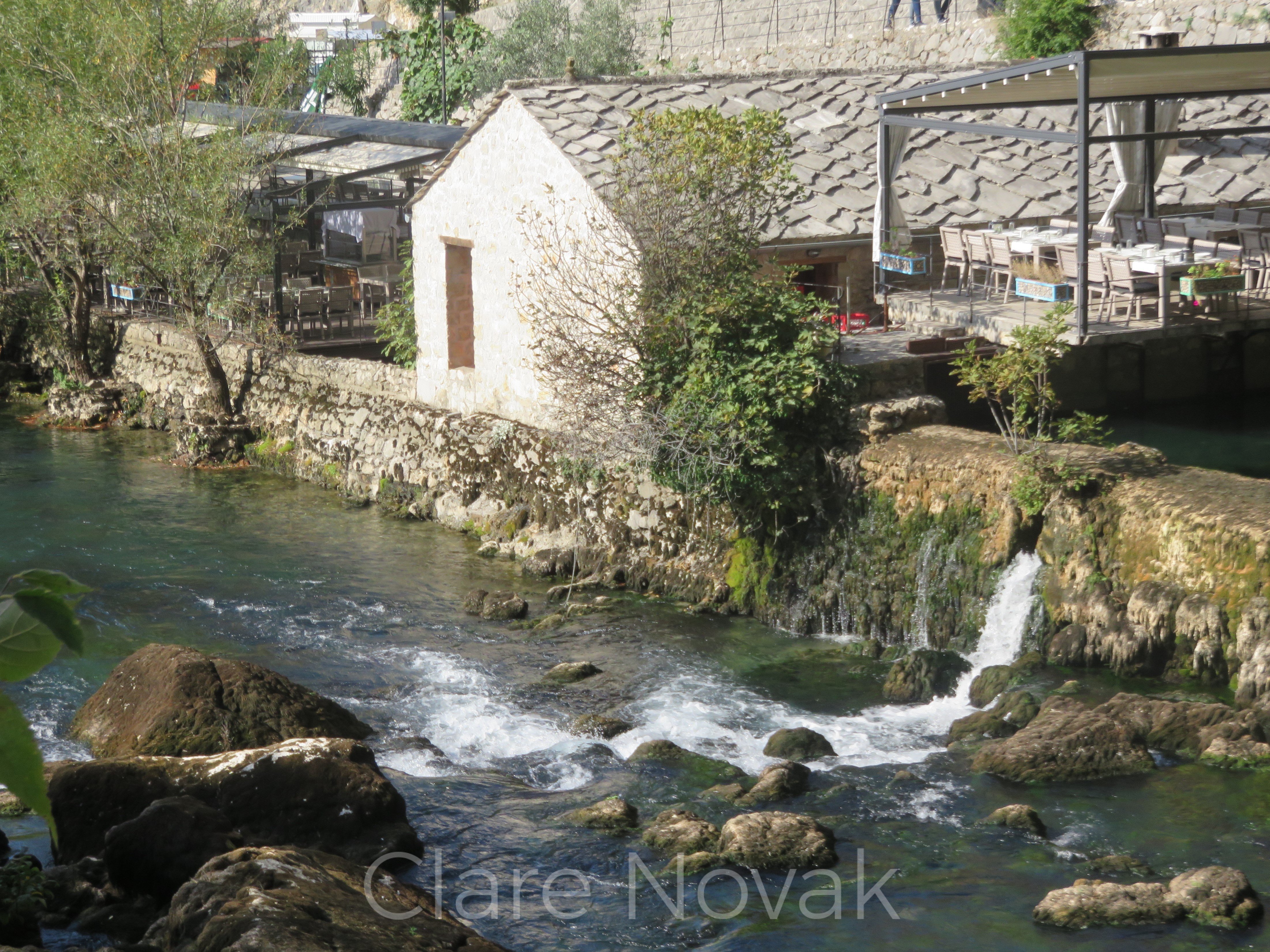 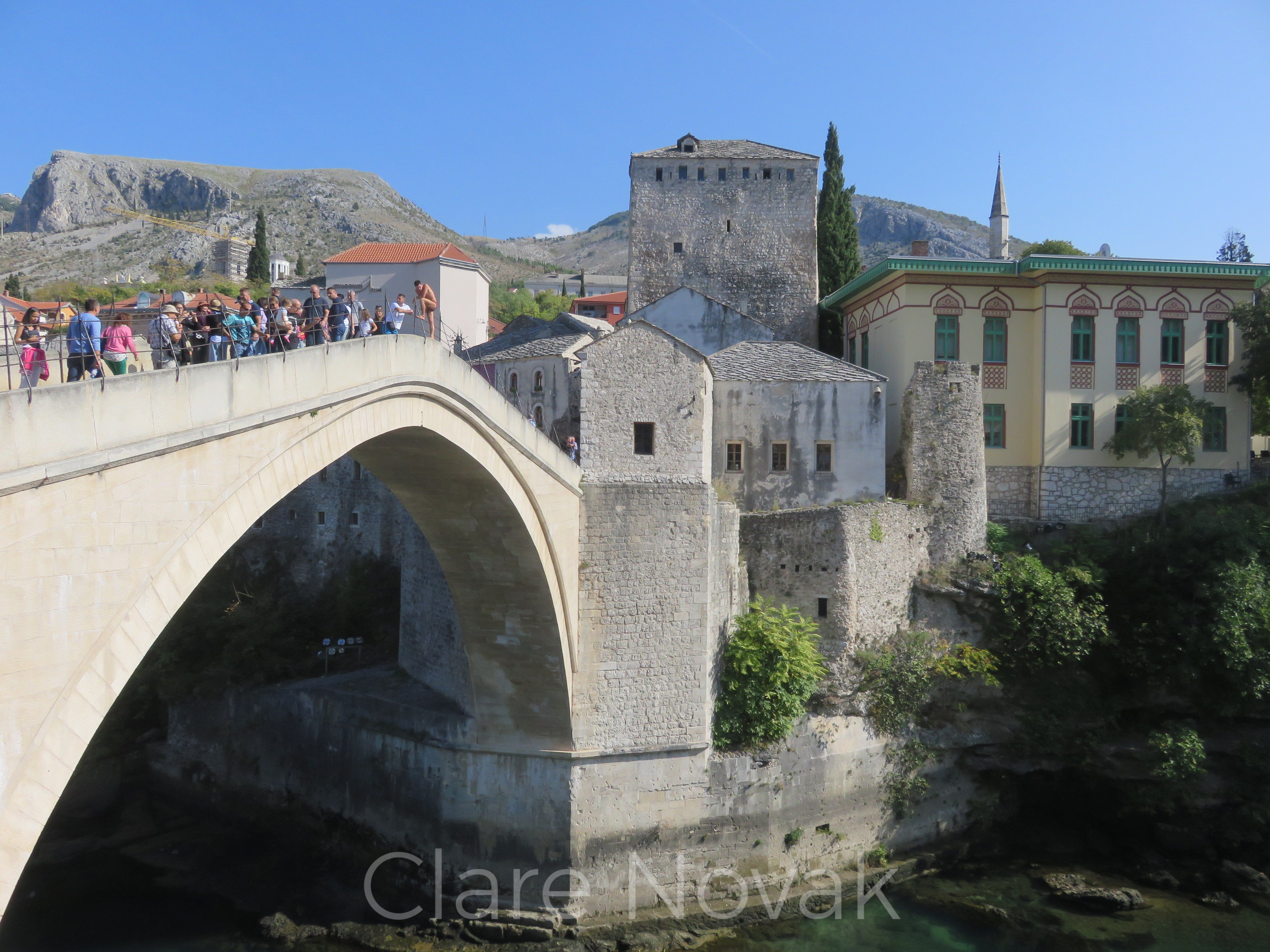 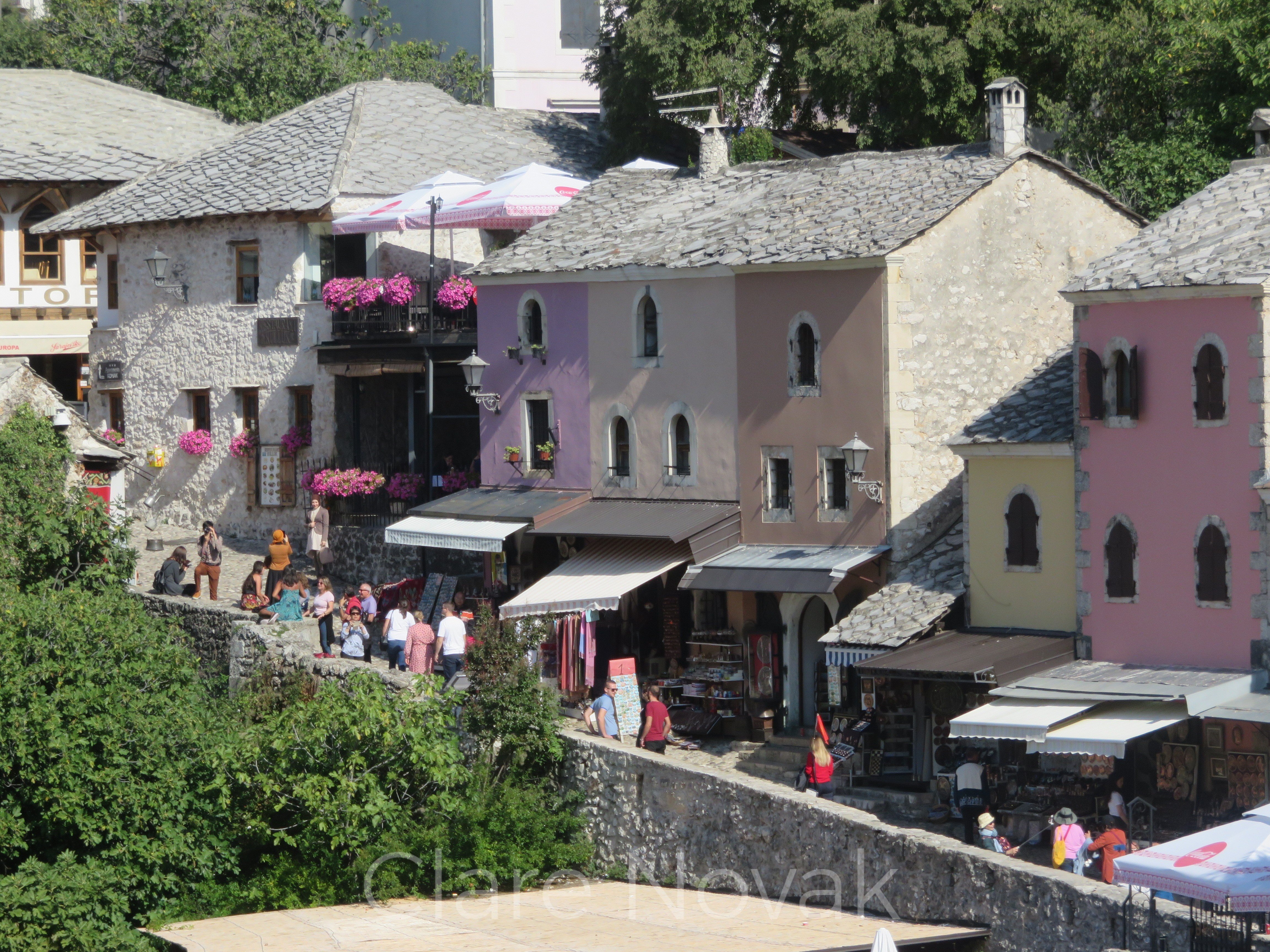 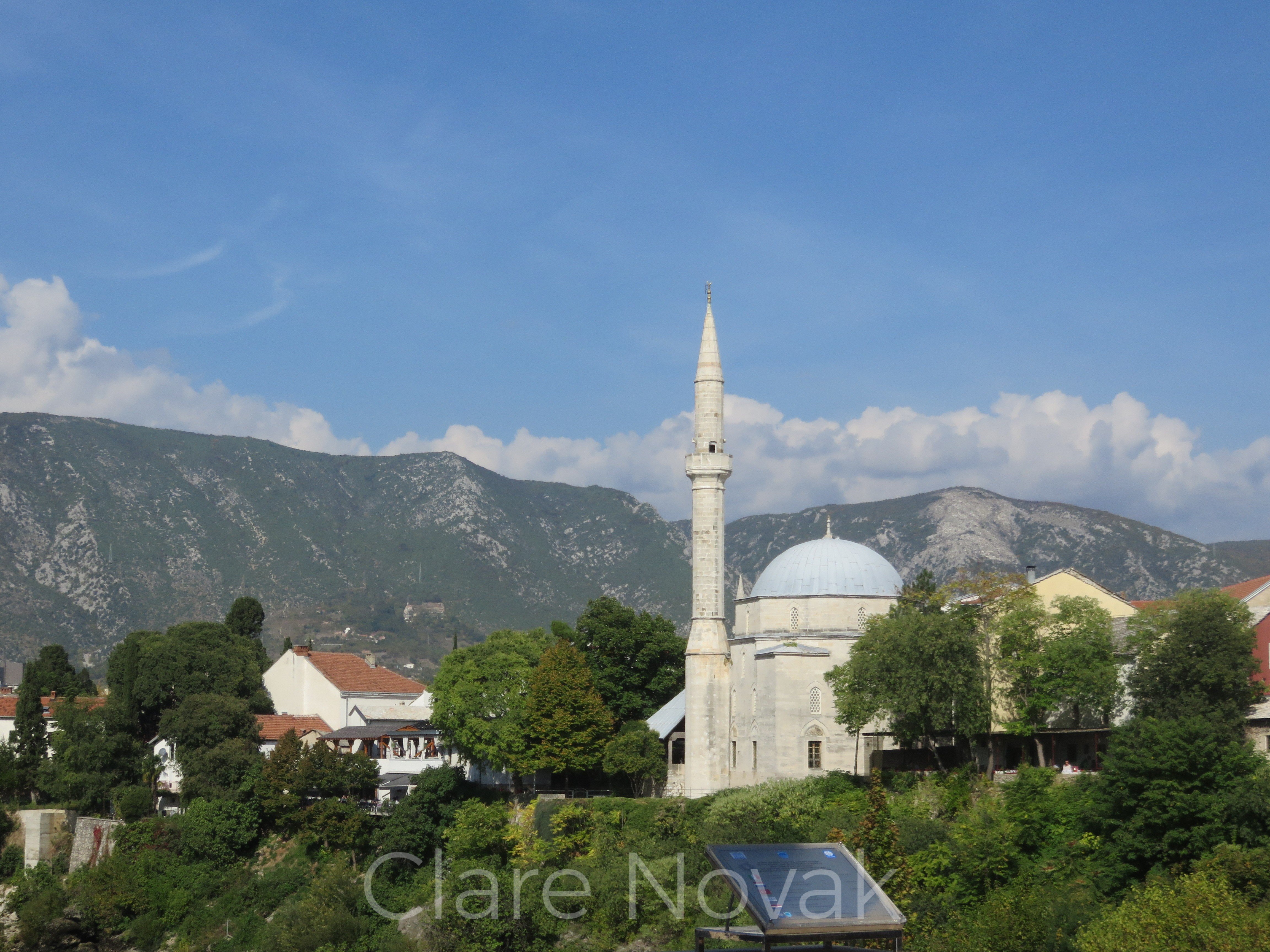 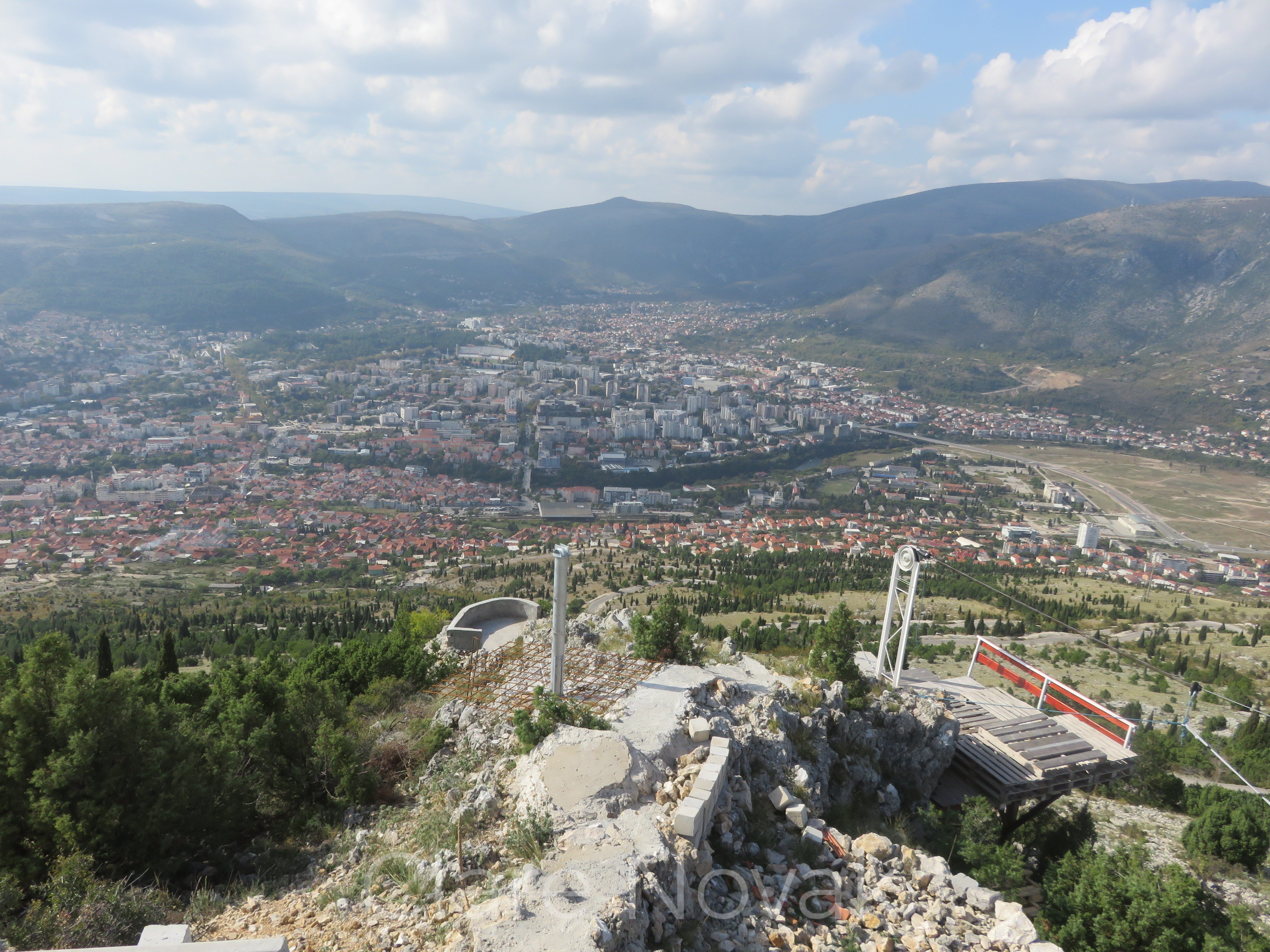 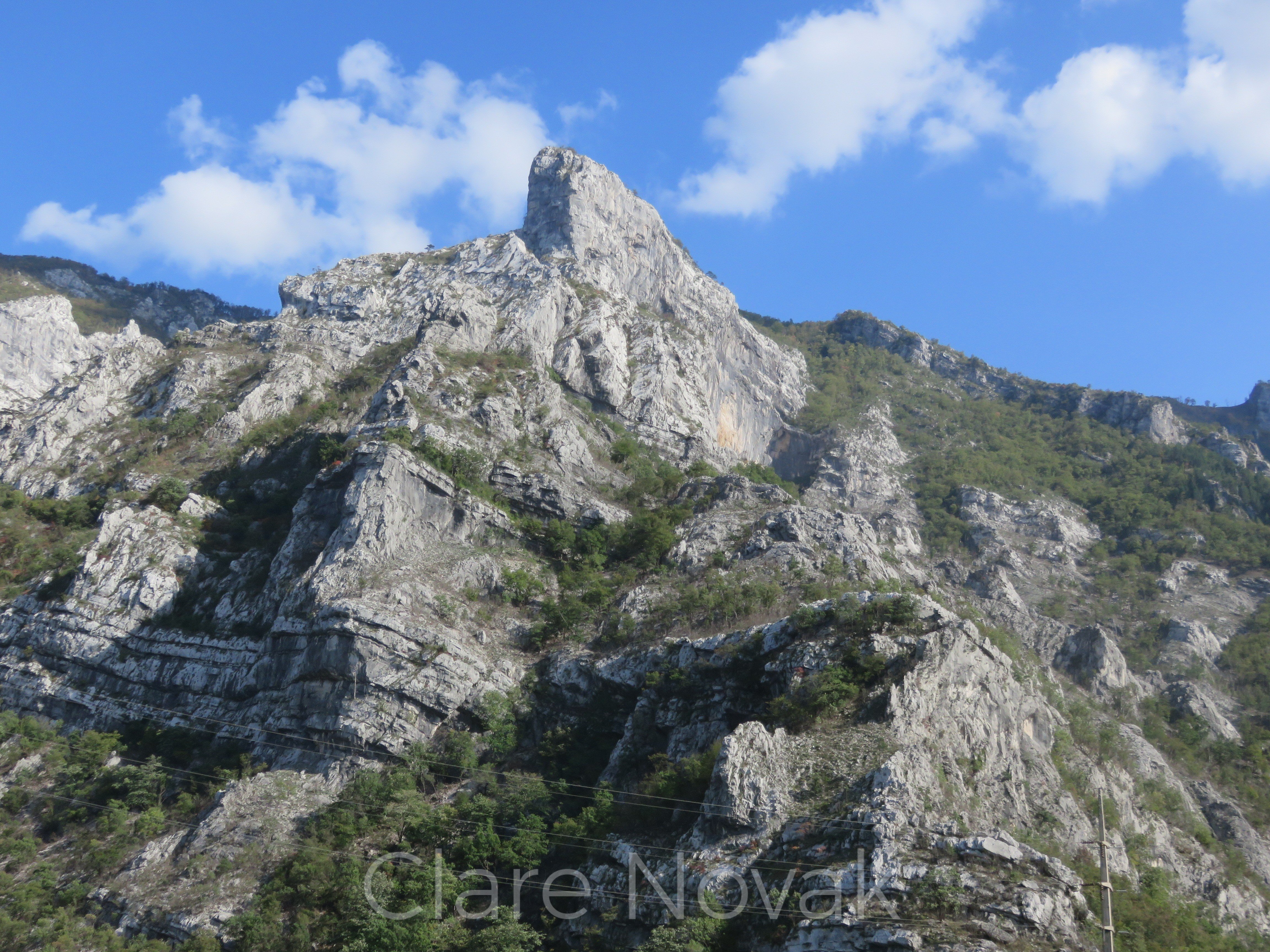 The trees are turning and the highway to Mostar has mountains like the Poconos. It is like driving up the Northeast Extension of the turnpike, entering a tunnel and inexplicably emerging in the Rocky Mountains. The shock of this time/space travel creates sudden awe. Low clouds clung to the mountains and other worlds moved though the clearing and fog.

Indeed the road itself changed from a highway to a road, mostly two-lane and three on steep climbs. Of course, a river runs through it in the valley. “We are going to make a stop.” Nermin announced. This was to a village on a river branch. This beautiful, little place was a little walking break to see the cave over the river and a cup of Turkish coffee. There I saw something I’d never seen before, spotted petunias.

The route to Mostar tracked though the up-thrust mountains of nearly vertical stone ridges. Old town Mostar is about the bridge. After the war, the two sides of the city were reunited as the stones of the original bridge were gathered and rebuilt. The bridge stones under foot are themselves worn smooth and slippery. Hundreds of thousands of footsteps crossing and re-crossing reunite people. That is the meaning of the place and a lesson for our time.

October, after peak tourist season, left room for walking and pictures unblemished by selfie sticks. The tourists guarantee the ubiquitous small shops lining the pedestrian walk on both sides of the river. Mostly tourist trinkets and restaurants line the walk but among them are a few shops with quality goods. There was finely made enamel jewelry that had I not bought some in Georgia, I might have purchased. After an hour’s wander, I rejoined Nermin to head back.

“Now to the zipline?” he said. “Why not?” I laughed. We headed up the—I hesitate to call it road—one lane paved goat path. And headed up, and up and up. The further up the switchback we went, having to pull over to let other cars down, the more I questioned the wisdom of my whimsical “Why not?” When we reached the peak, my “Why not?” became “Definitely not.” From the mountain top, the zipline looked like a string stretching from one mountain to the next. I chickened out. When Nermin teased me, I said, “Ok you go first and I will follow.” Needless to say we drove down the mountain.

Our timing was good because as we reached Mostar again, there were people headed to the stadium for a local rugby match. It would have been quite a delay had we returned when the match was over and people were heading home.

The way back was as lovely and magical, in a different way, as the morning of intermittent fog. Time had moved on a bullet train for the four and a half days of meetings. Then, just as suddenly, it felt as if I had been here a very long time. It is comfortable sitting at an outdoor table, drinking a Karlovačko beer. There was everything normal about seeing a Novak Travel bus. It was funny to see the TV show “The Rookie” translated as “Novak.” Yeah, I’m the new kid on the block, the rookie, but part of my DNA is here.