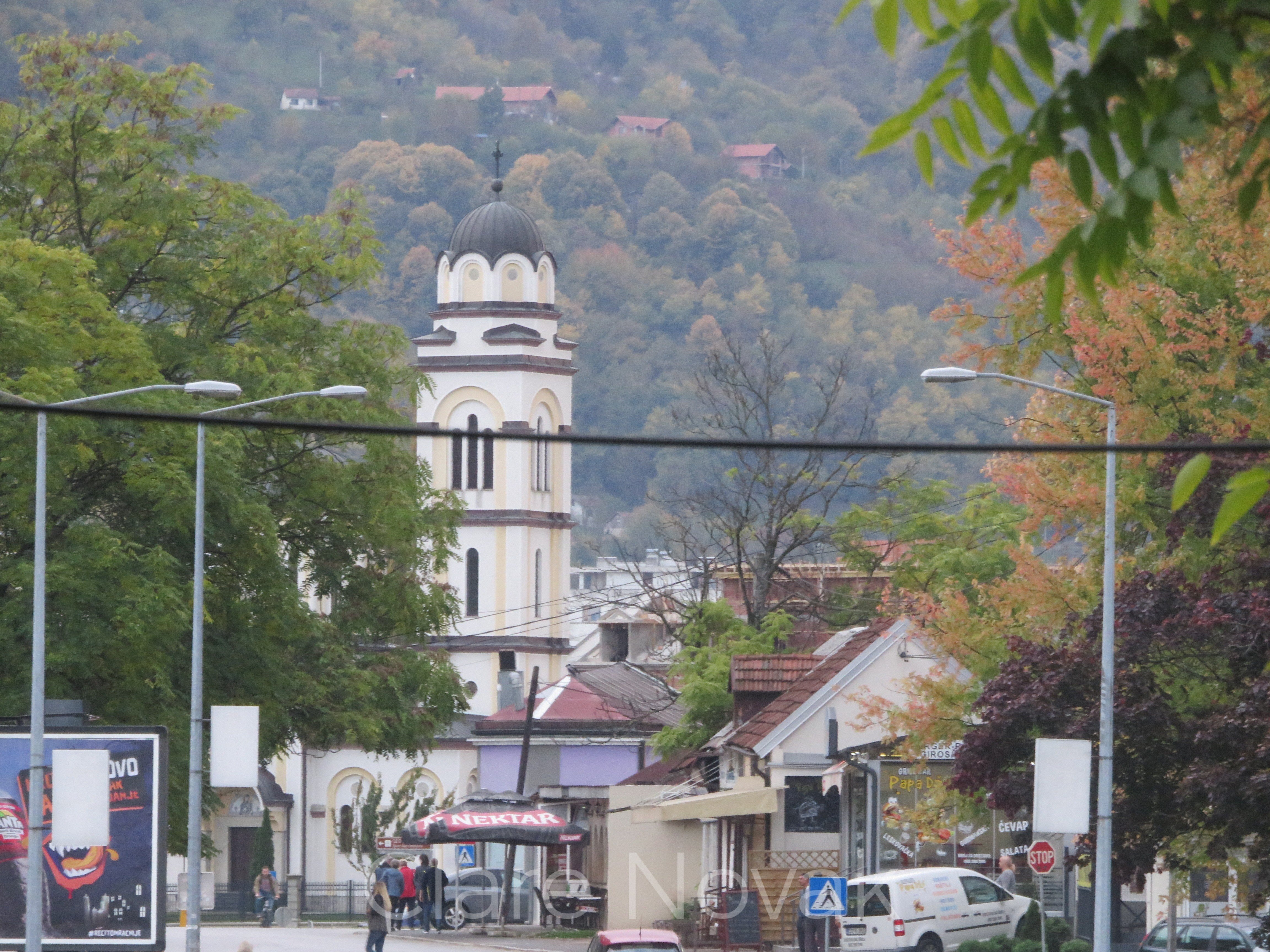 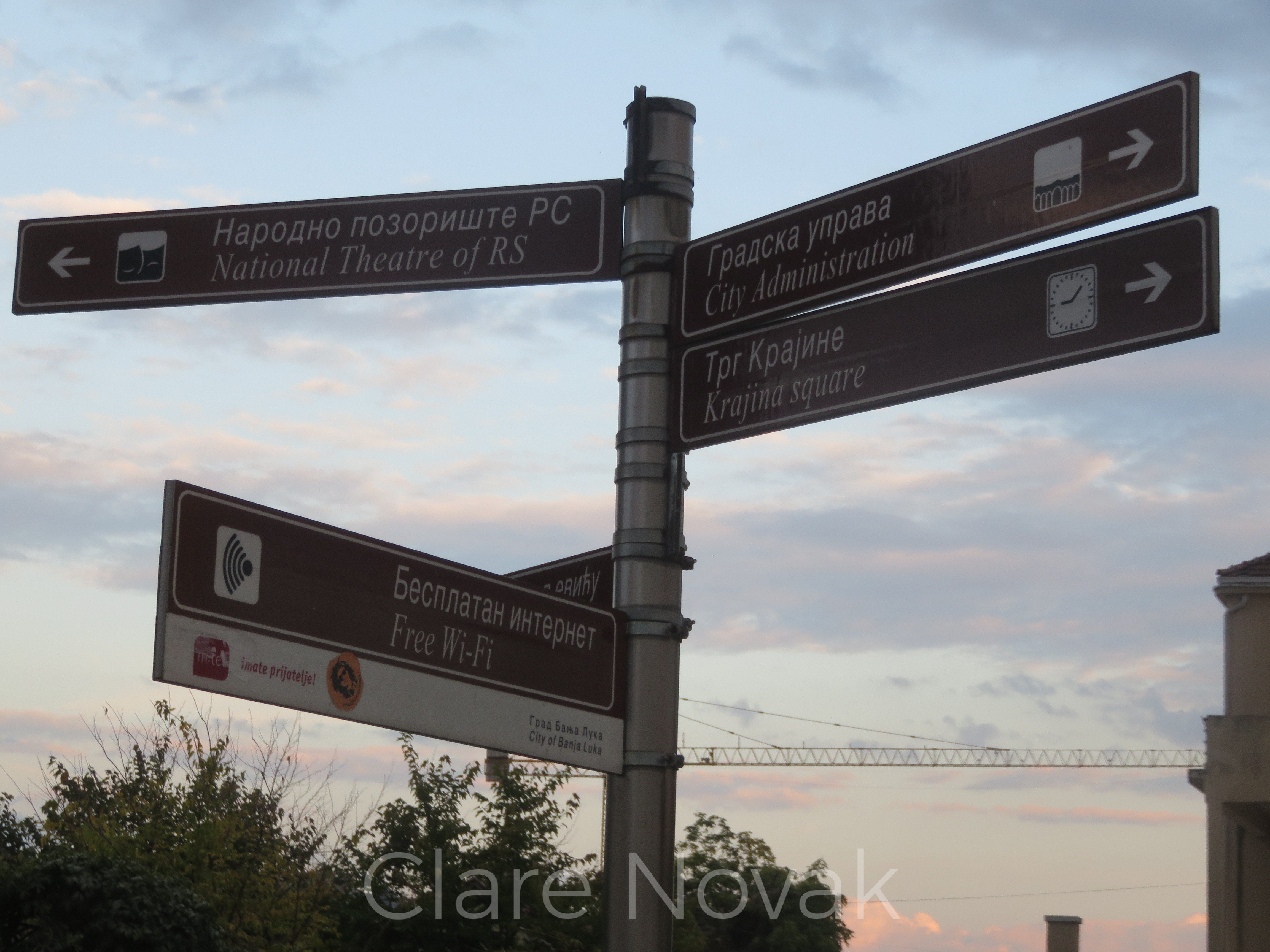 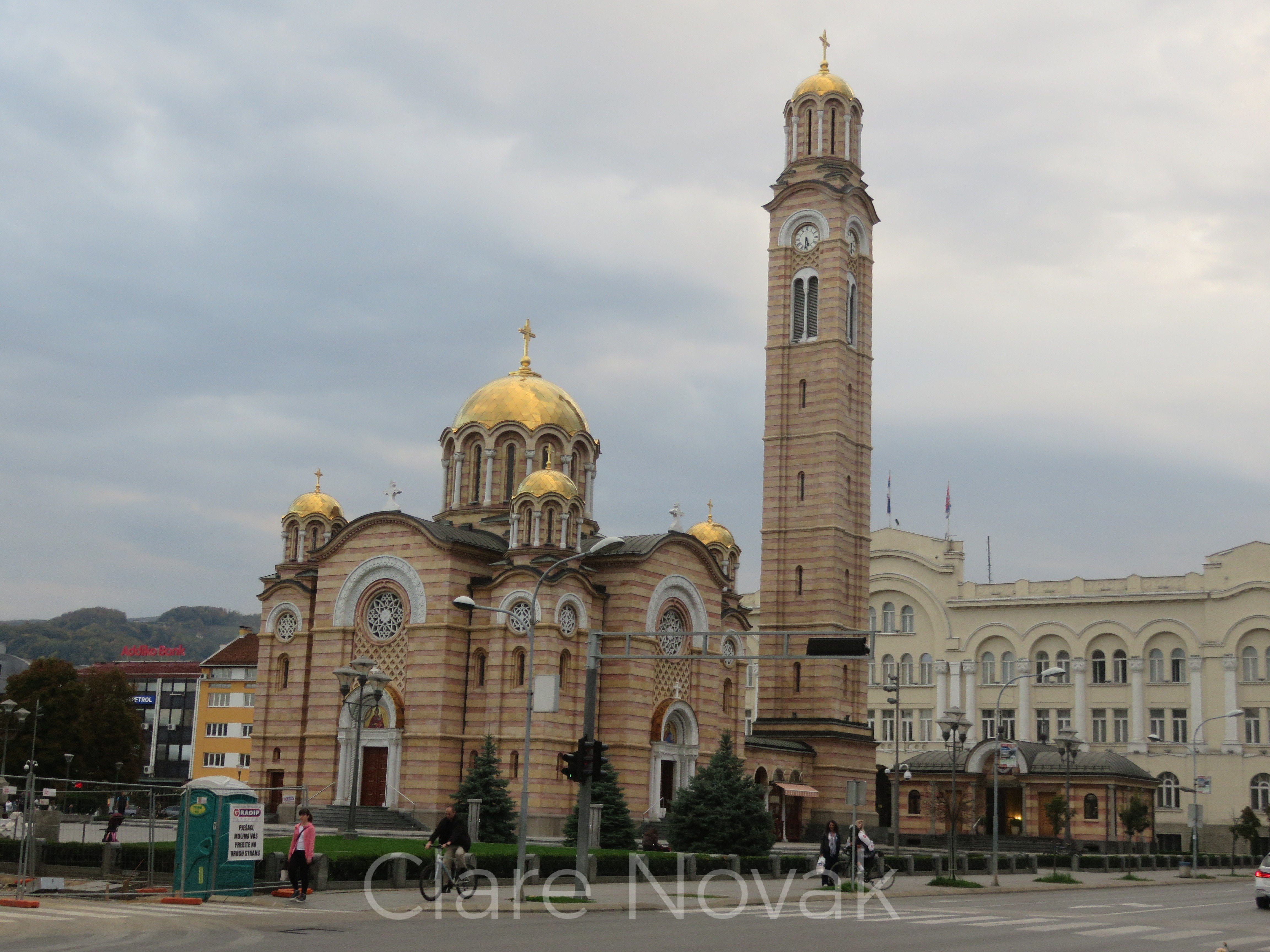 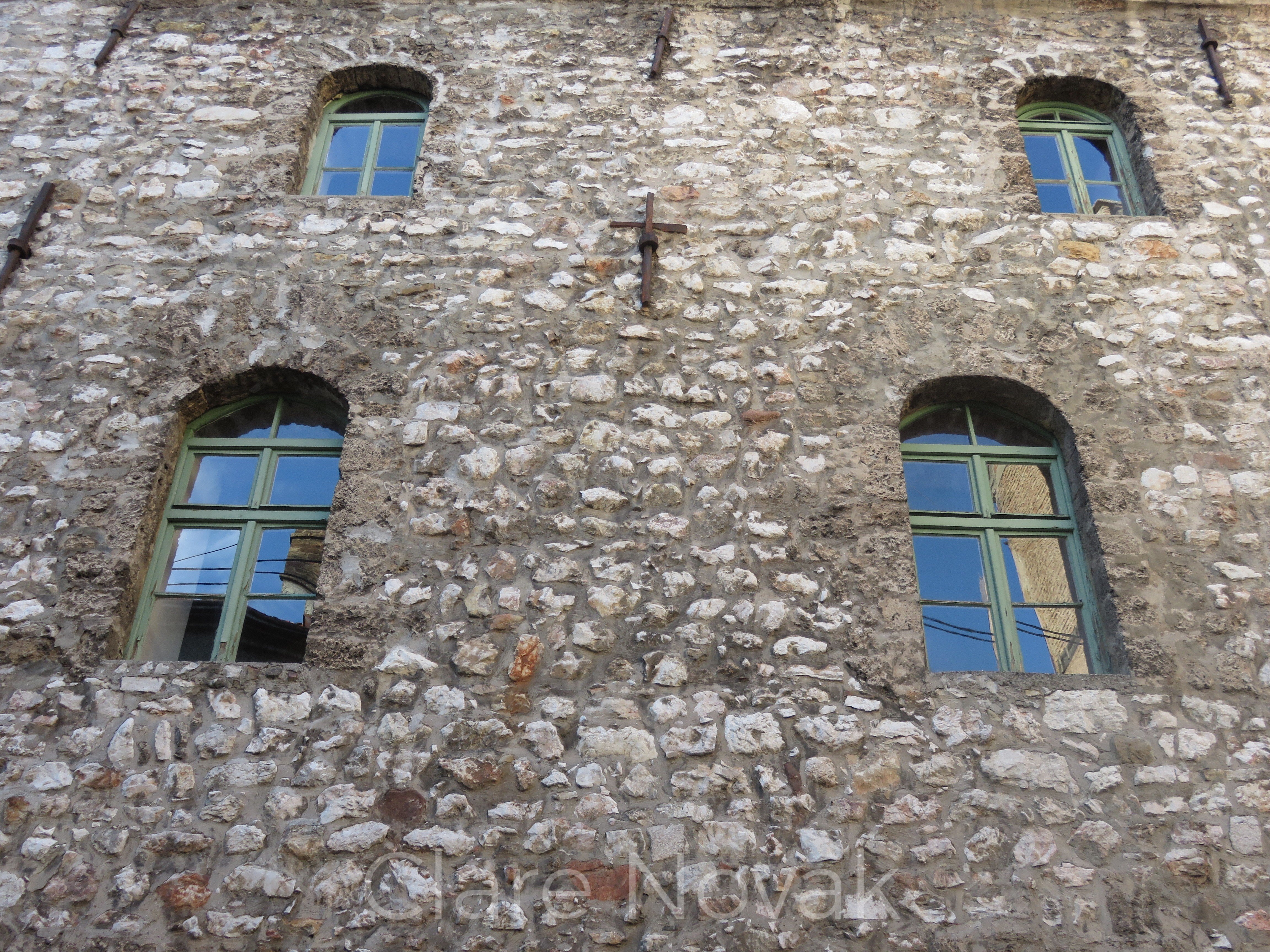 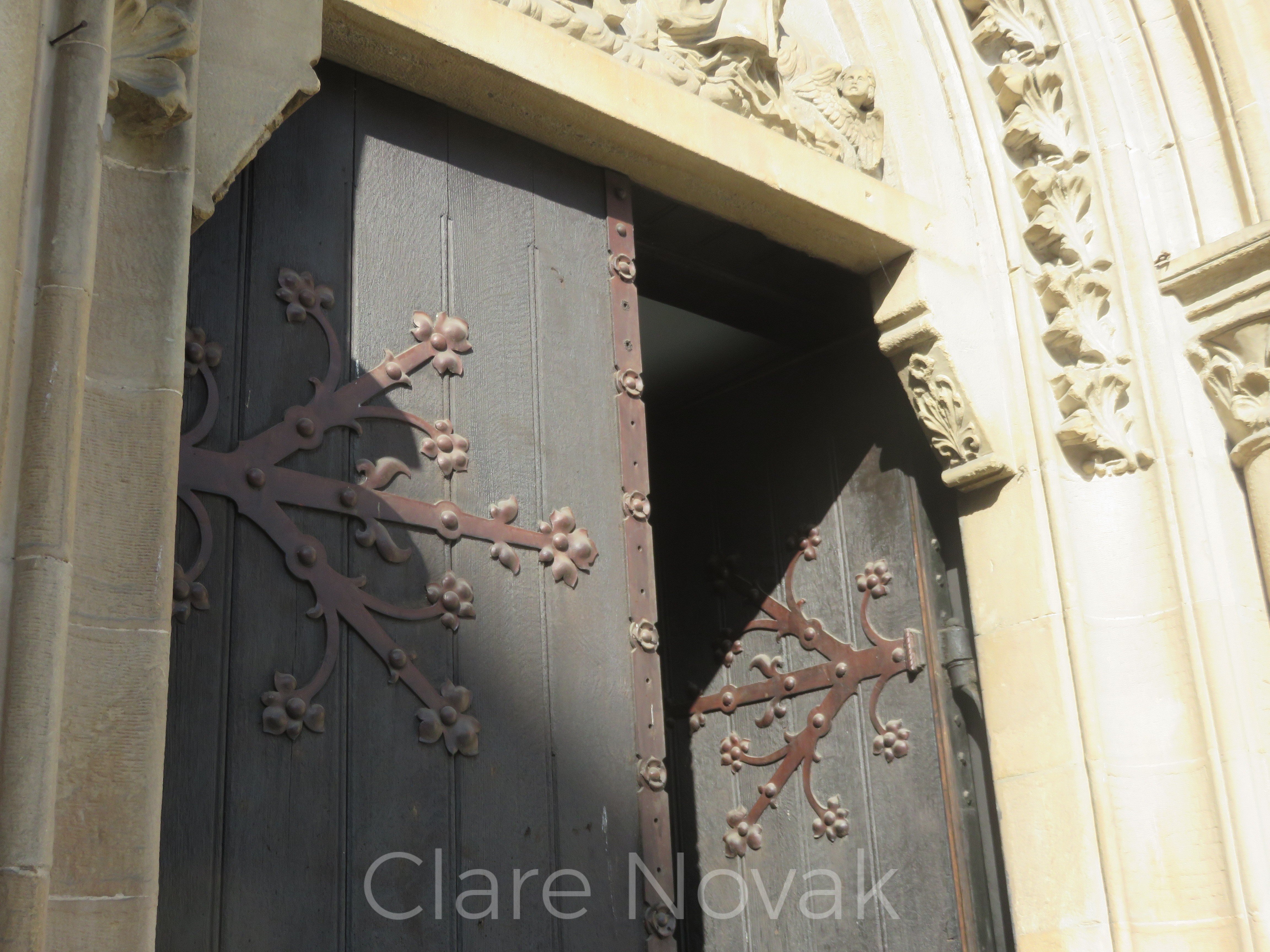 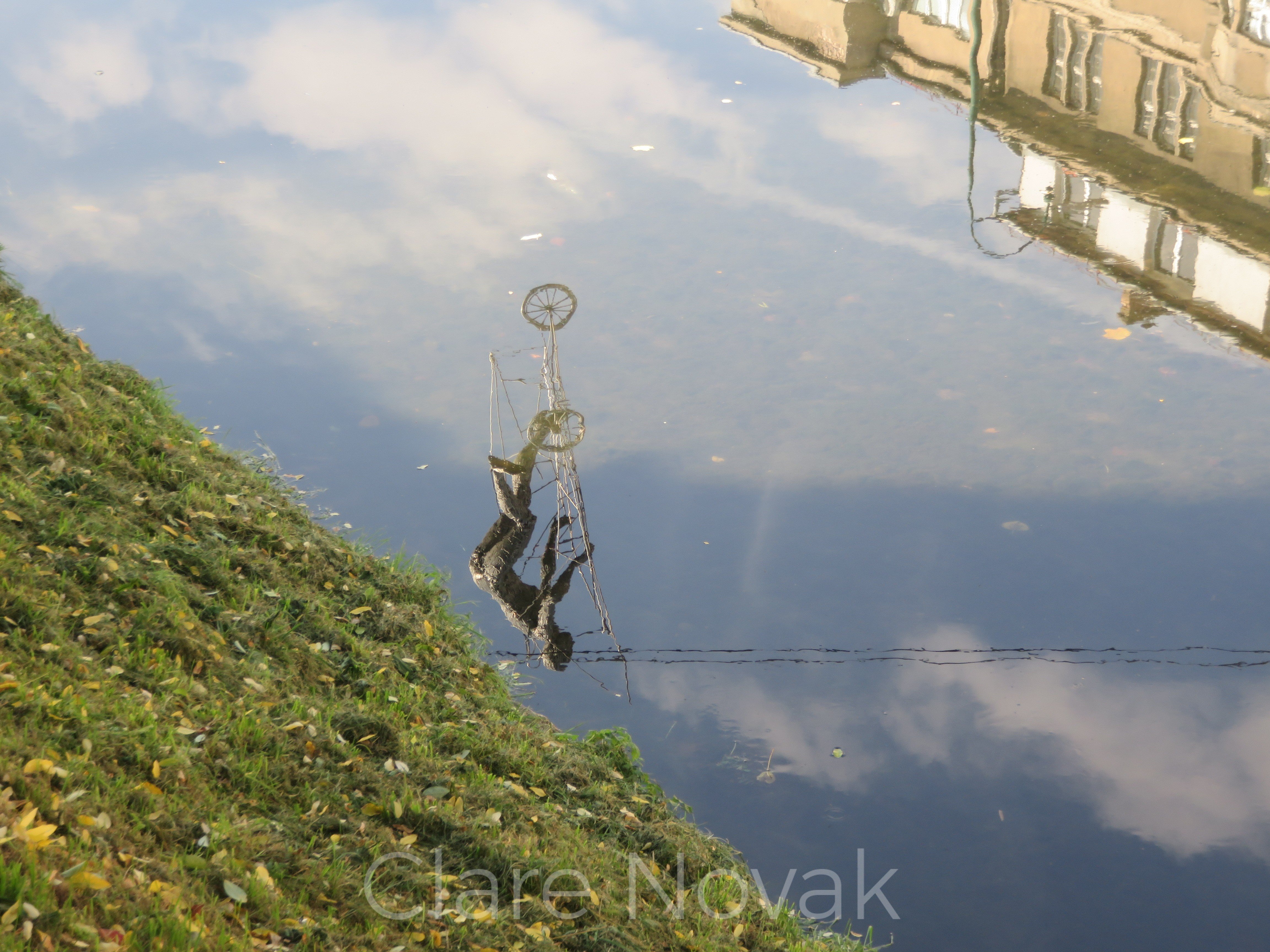 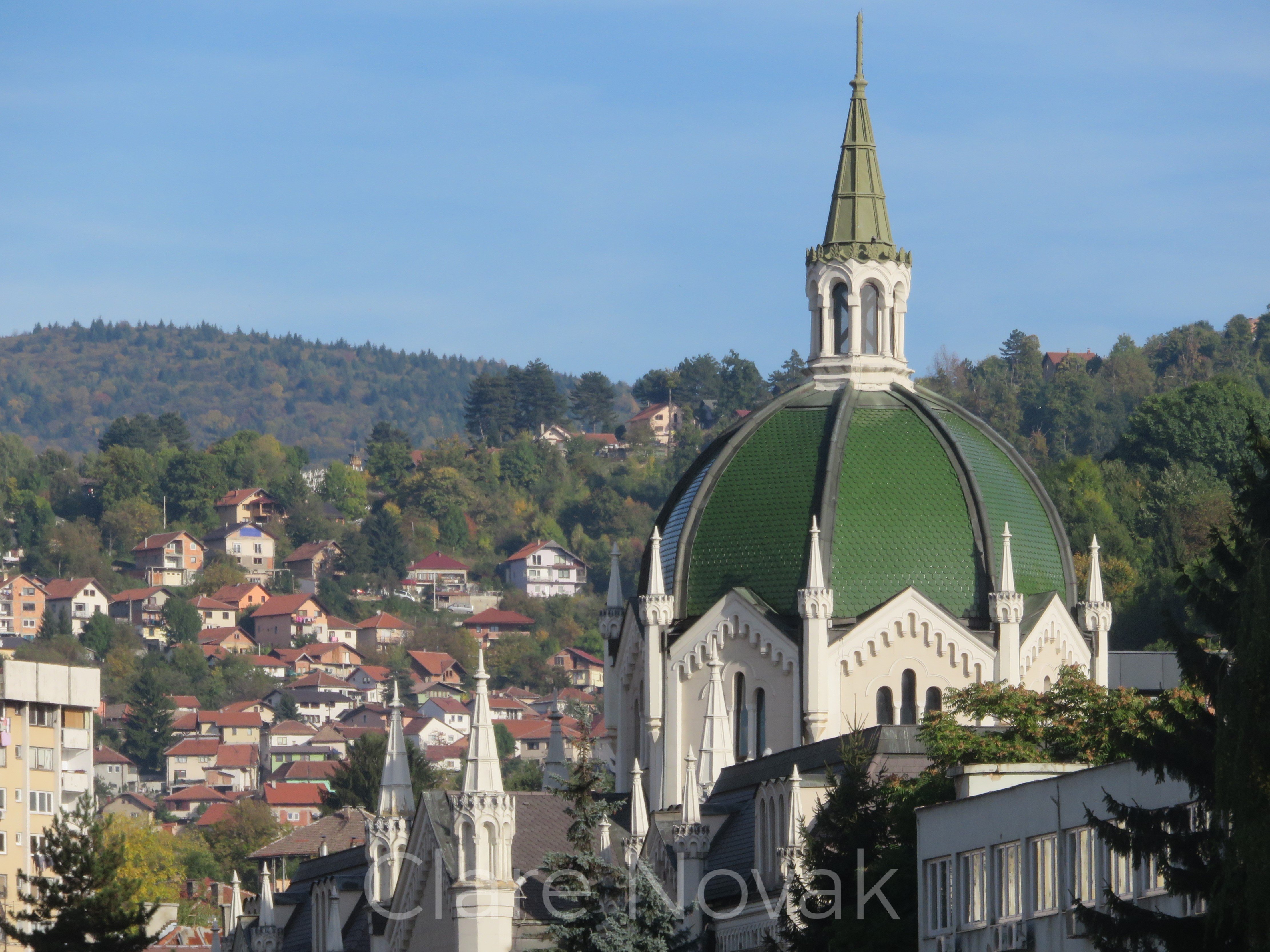 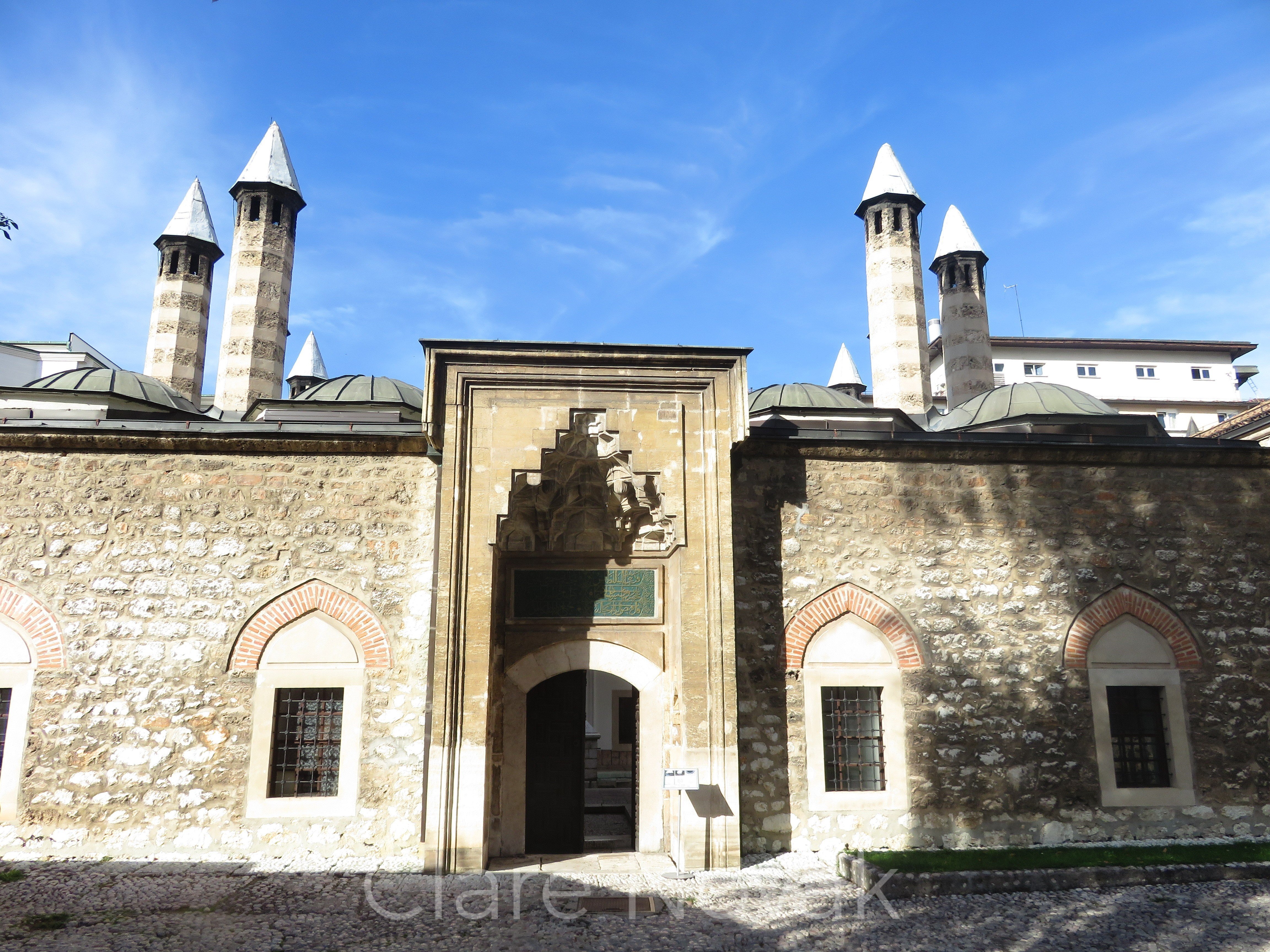 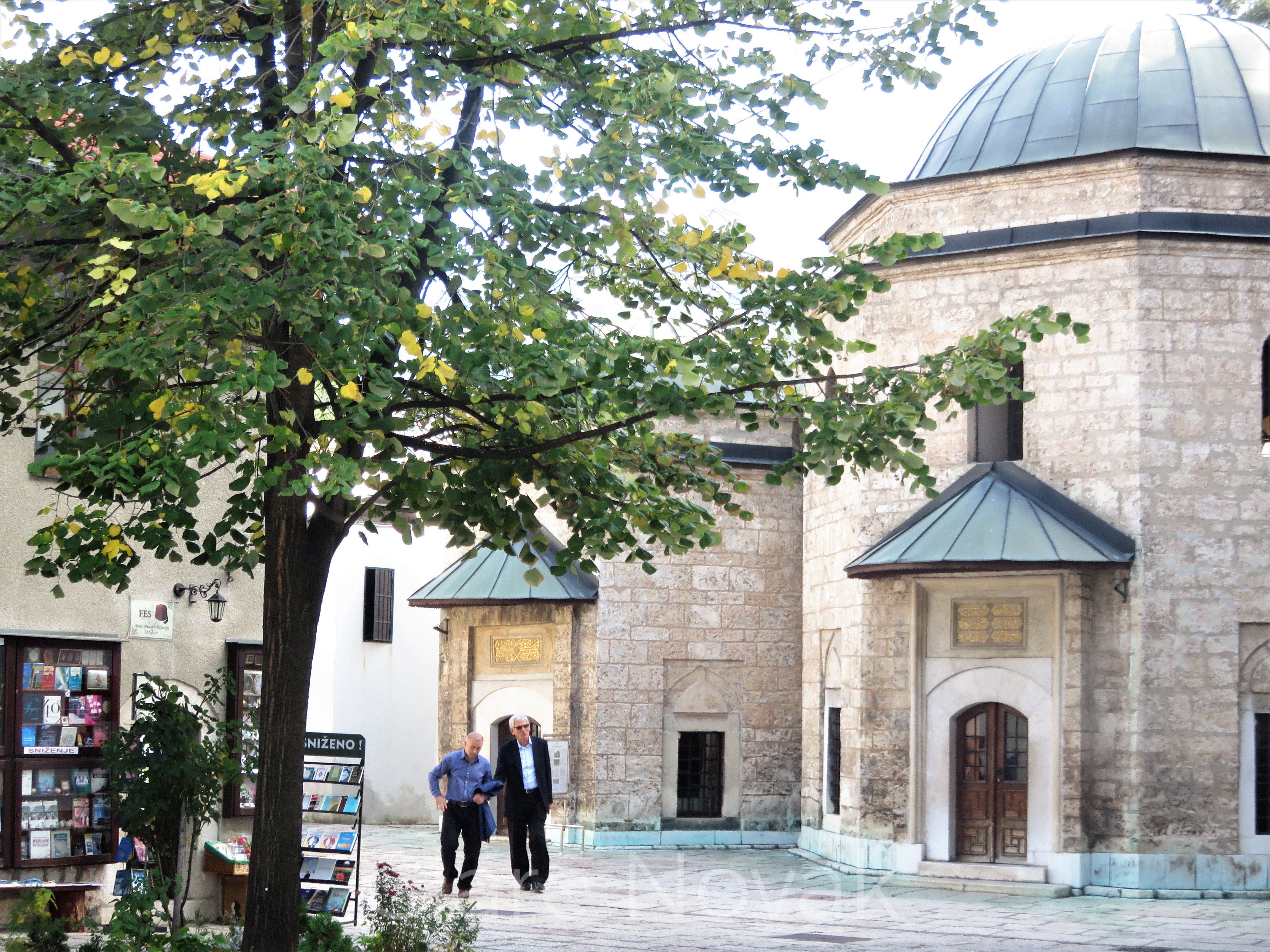 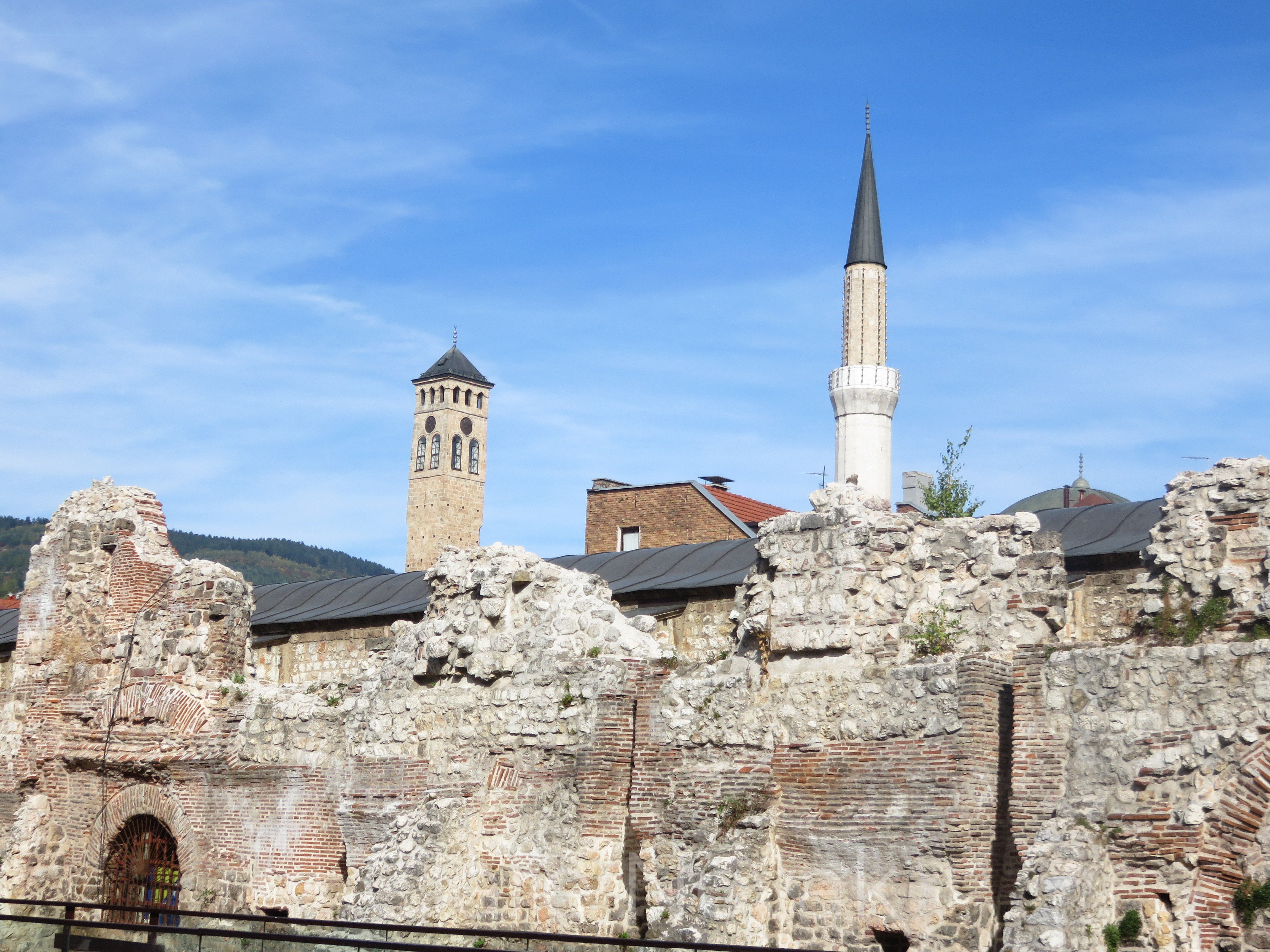 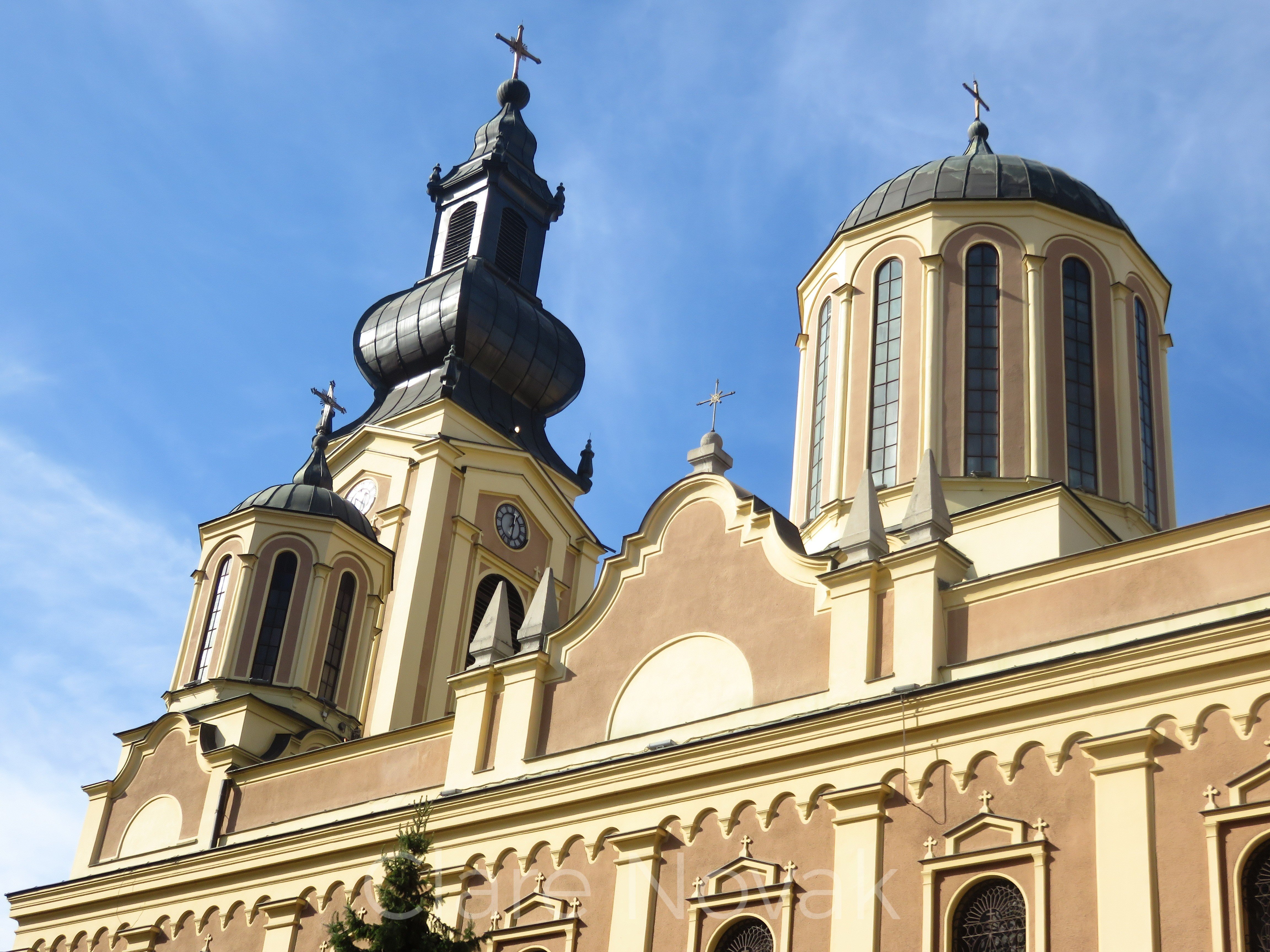 Sarajevo gave up a perfect afternoon, so it was an easy choice to walk to Old Town and meander around for those few precious hours of afternoon. The walk was a pleasant one mixing views of old buildings and interesting alley ways. It was easy to know when I’d entered Old Town. Old churches, even older mosques and the foundations of the oldest structure, the caravanserai. The caravanserai was the country inn of its day. It was for the gathering of camel caravans, trade and rest. If you grew up with the notion that the “innkeeper” who put Mary and Joseph up in the stable was a bad guy, think again. The caravanserai owner was likely offering the best kindness he could—privacy.

The current traders set up small shops and kiosks of colorful, crossroad goods. There was everything from fridge magnets to lamps to pashminas and jewelry. Having traveled so much, there was little to entice me and indeed my pleasure was in watching the transactions and listening to the many languages. The one shop I would most like to have visited was closed on Sunday. It displayed products of intricate needlework that I would be proud to own.

With jet lag fast catching up, it was time to walk back to the hotel in the last of the afternoon light. Earlier, I had noticed a roof top restaurant across the street from my hotel. It was an easy decision to treat myself to a sunset dinner. When turkey cutlet with black truffle cream sauce appeared on the menu, I had to have it. Don’t think I’ve ever indulged in black truffle before, as any ingredient at Wegman’s over $400 an ounce gets crossed off my shopping list. But given how delicious that truffle cream sauce was, I may fall off the thrifty wagon. One glass of wine became two and the air significantly cooler after sunset. A final toast that the project would start as well as this day.

Project such as this blur the social and the business. Time to wander into alleys or stop for a photo is small. Even our travel to Banja Luka was at night so the countryside went unseen by us. The distance in our milieu would have been about an hour and a half. As it was here, what should have been three hours turned into six. Due to a closure on the main road, first we sat and waited, eventually deciding to back track and take a side road around the closure. It was midnight when we arrived.

Tired and cranky, the three of us staying at a hotel our local experts recommended we unhappy to find no one to check us in and we pounded on the door eventually a man with no English opened up and we carried our luggage up the stairs to the rooms. While the rooms are fine for tourists, they “lacked functional workspace.” This became a catch phrase among our group that caused laughter by its extreme diplomacy. When we met our one colleague who was booked at the Courtyard, the joke expanded as we teased him about the luxury of his accommodations.

After the day’s meetings we took advantage of the remaining daylight to walk to city center, with an active shopping and restaurant area though, other than a church and a mosque, no particular sites. It is as if Banja Luka was an accidental Capitol, and indeed, some historical ways it is. History would make for far too long a description.

Friday, back in Sarajevo,  was to have been a vacation day but due to a last-minute meeting became a half day, more education than vacation. What I had taken for the art museum was actually the Goethe Institute. I took a breath and decided that I was being called to see the Crimes Against Humanity and Genocide Museum set up and maintained by the survivors of the three-year war after the breakup of Yugoslavia.

This small space barely contained the agony of those years. Within the walls was a still and silent air that begged to scream the pain of murdered children, raped women, and tortured men. By the second small space, I forced myself to read, to not look away. Every scrap of normal life told the story of person no longer there to live it. The crazy fortune and random luck of the few became survival stories nearly unbelievable. And this happened as our “Peacekeepers” sat undecided on the sidelines. This was 1992, where were we?

I love my people; we can take three basic ingredients and make a gourmet meal. Perogies, glorious perogies, with our…