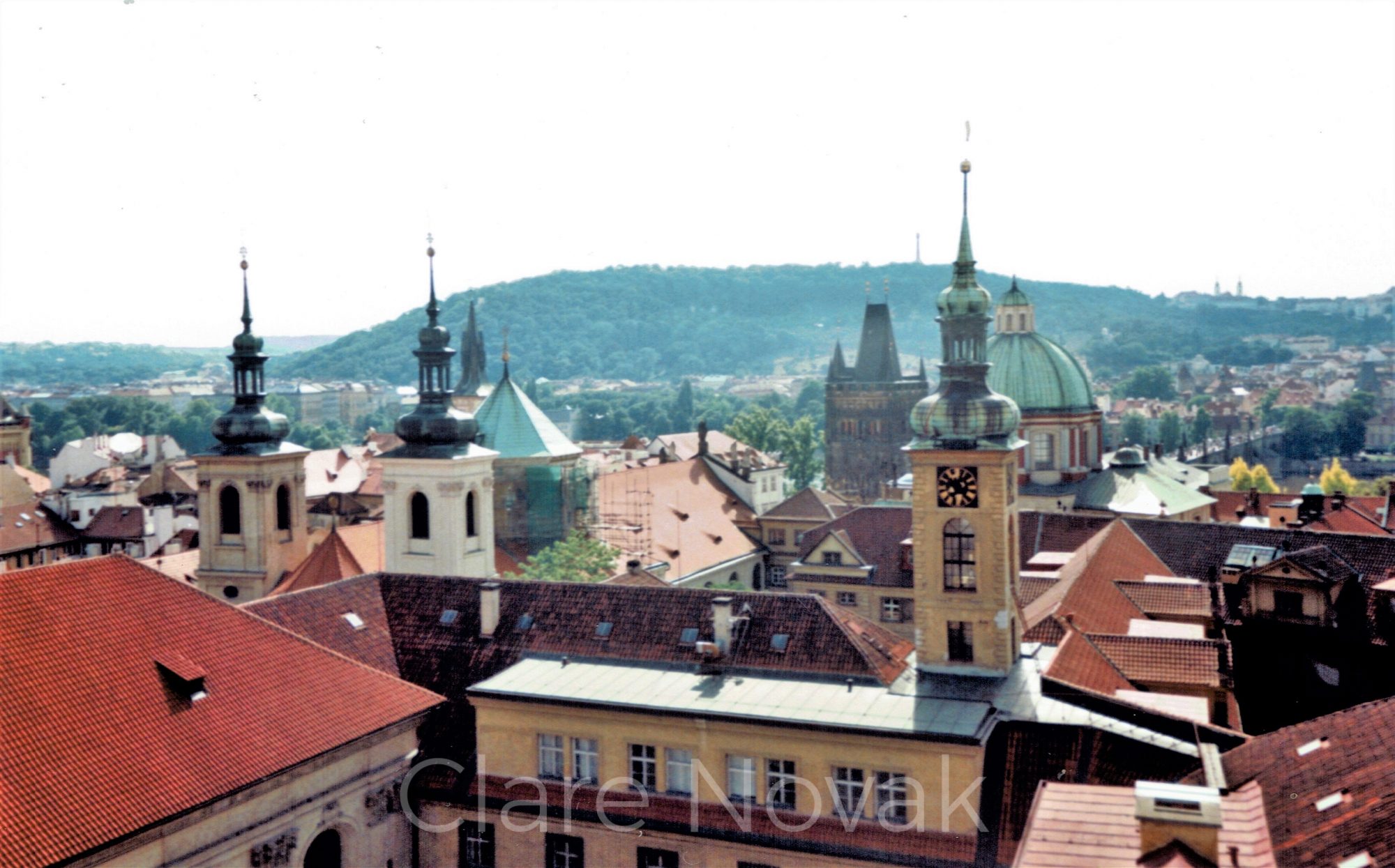 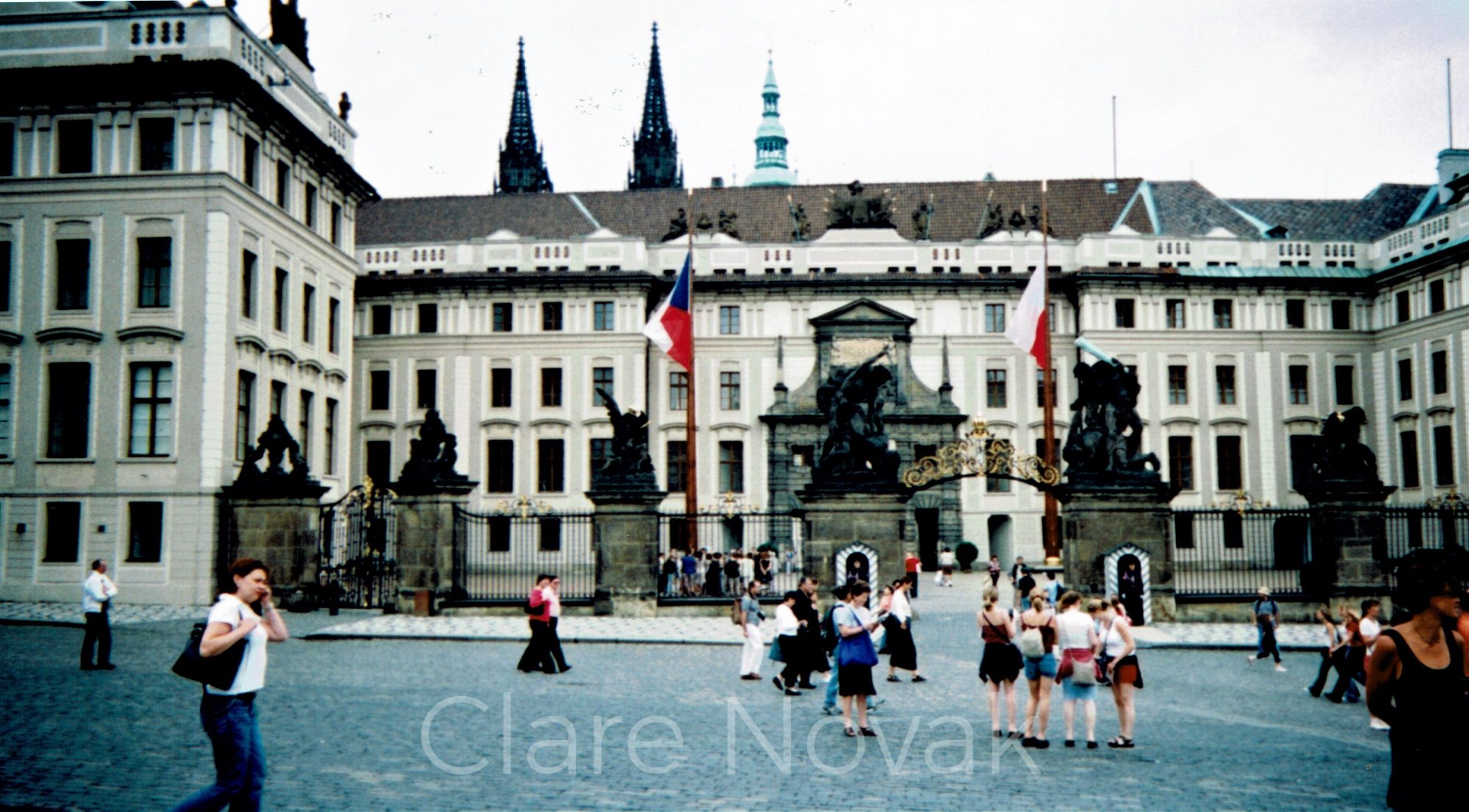 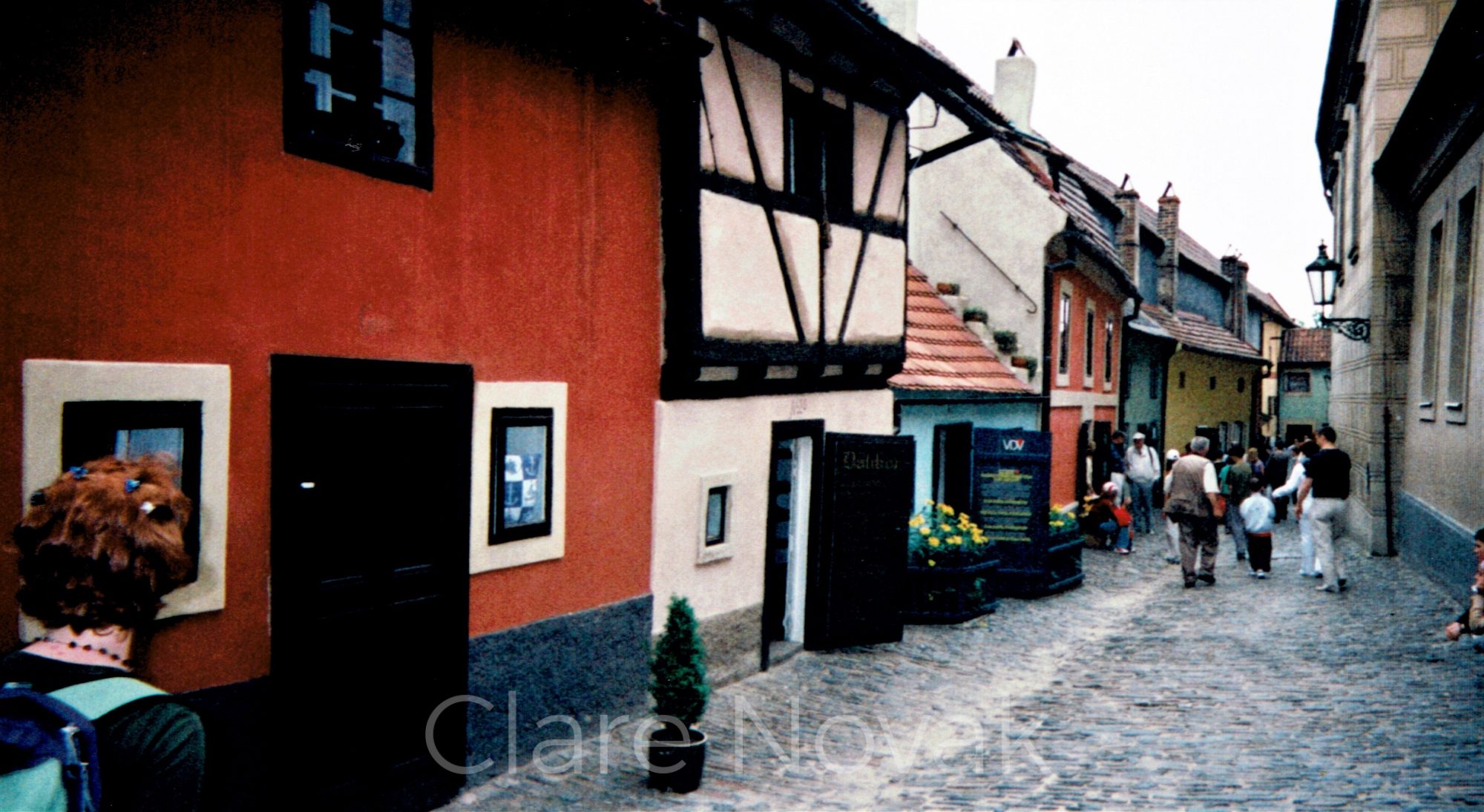 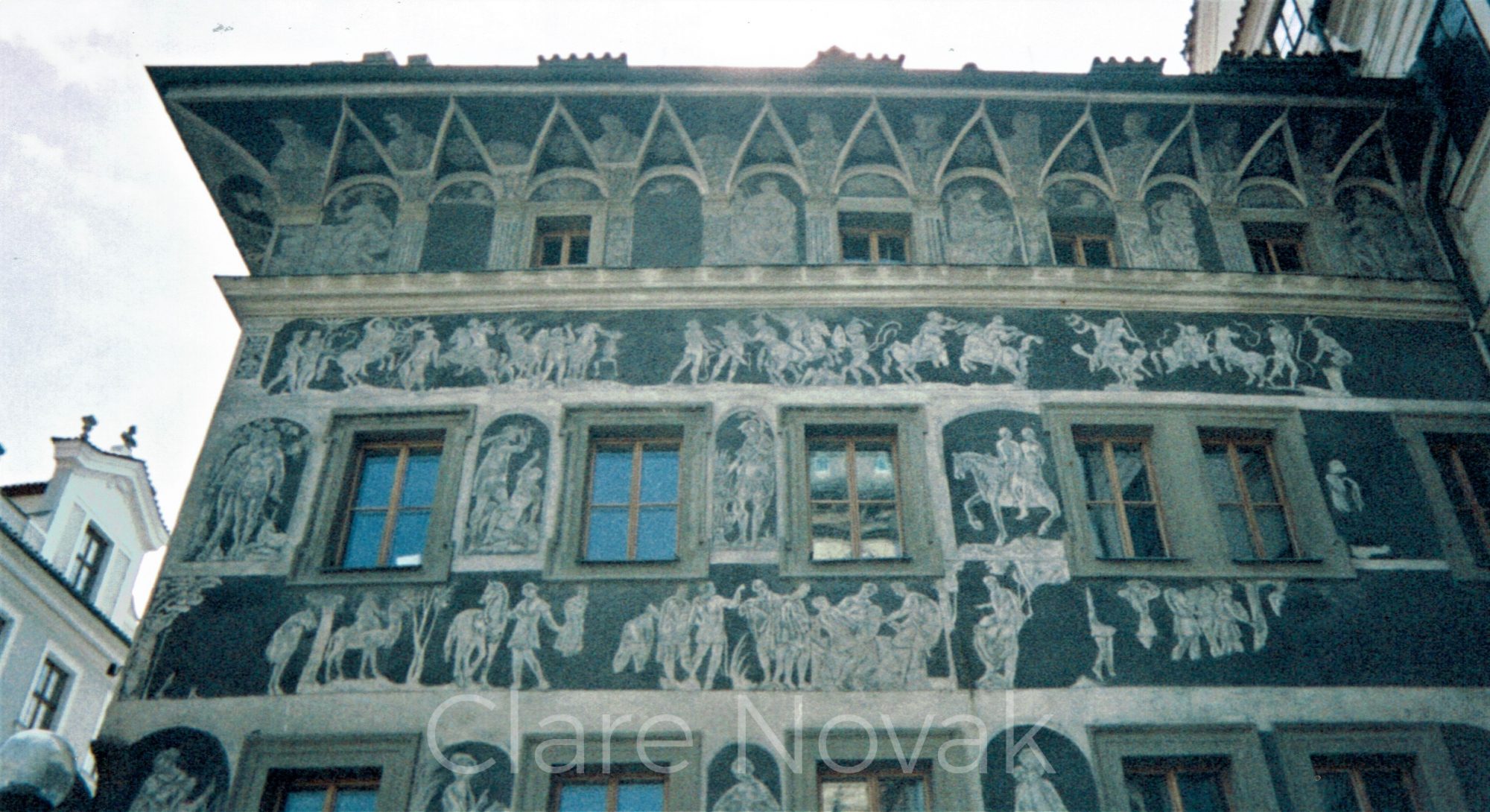 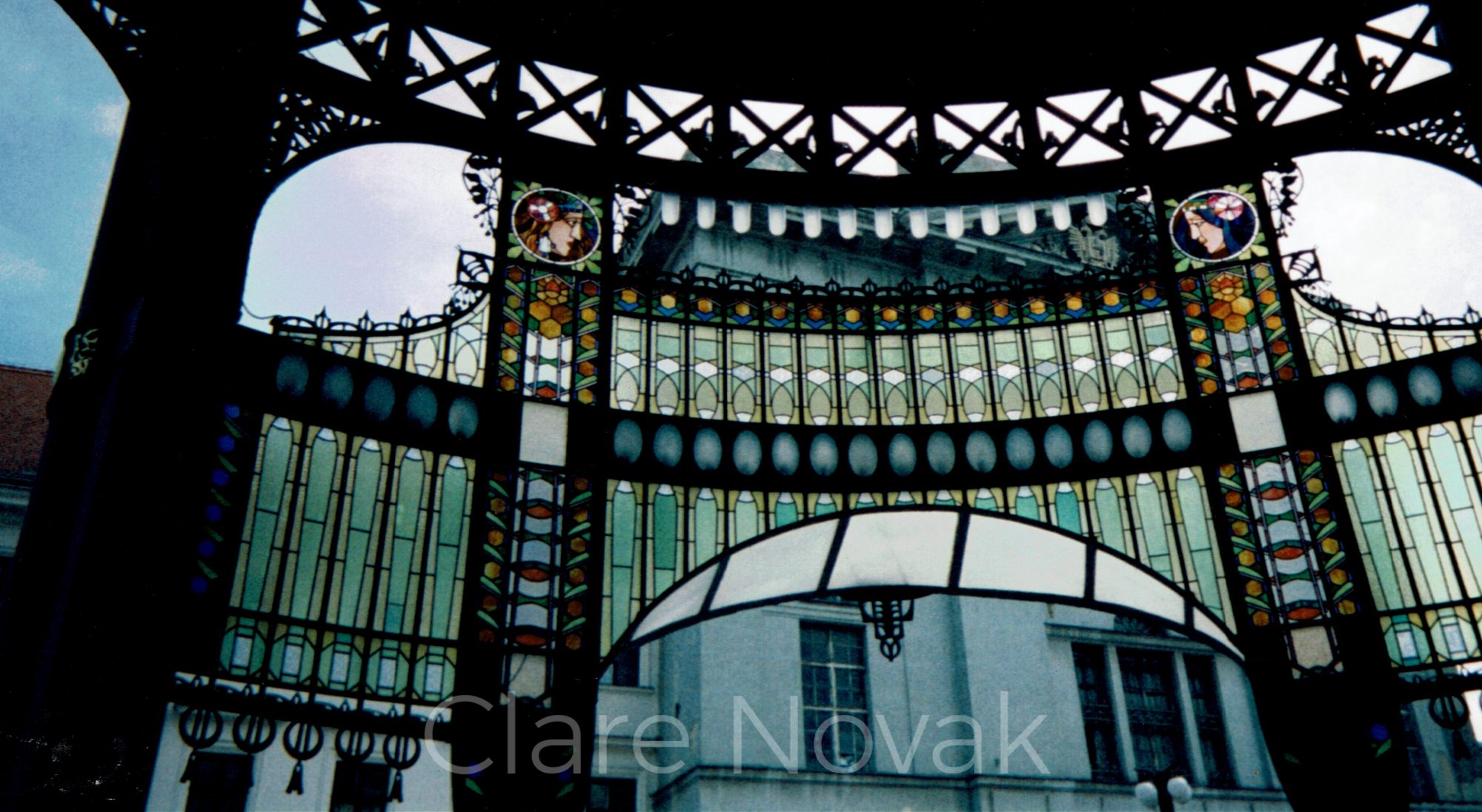 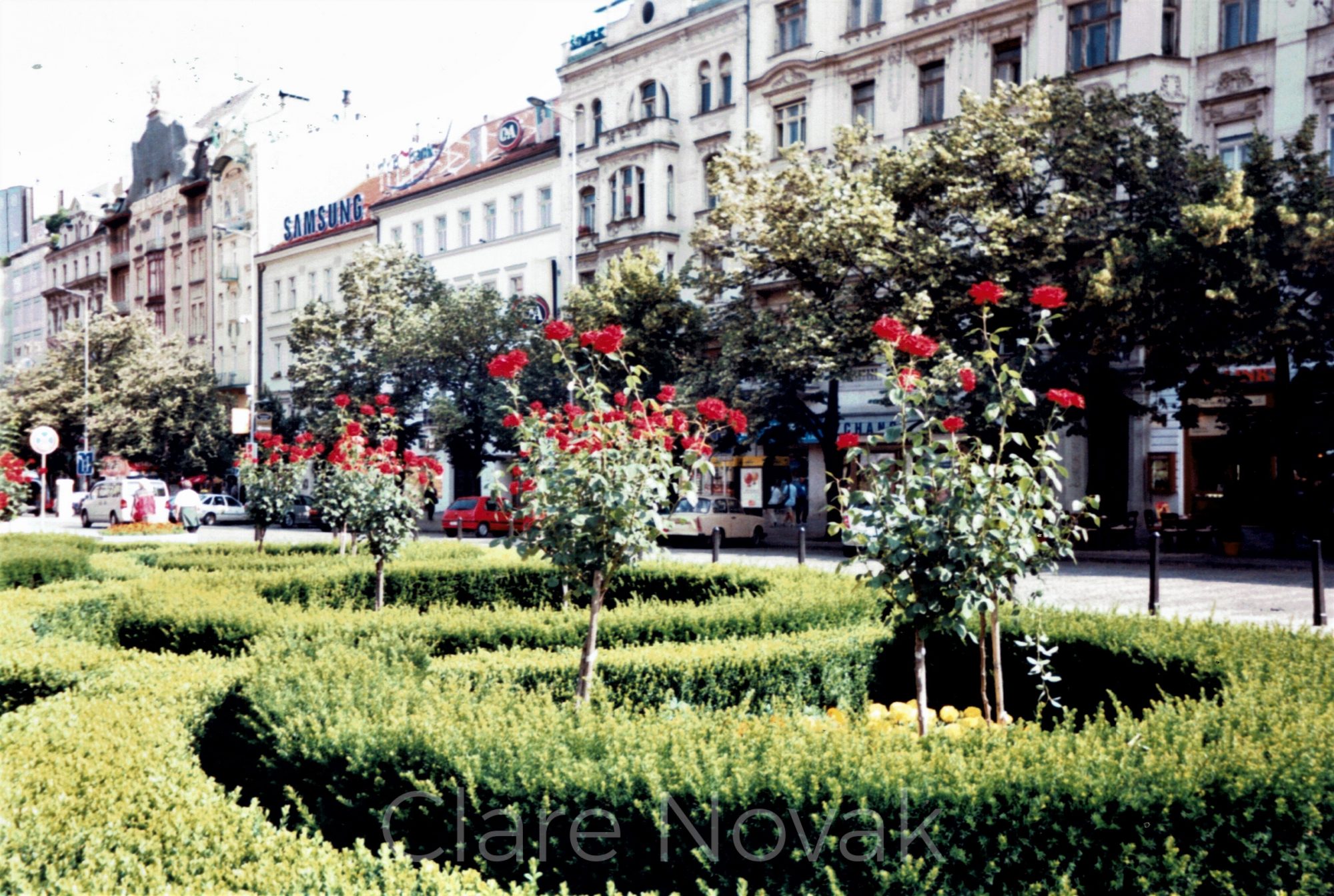 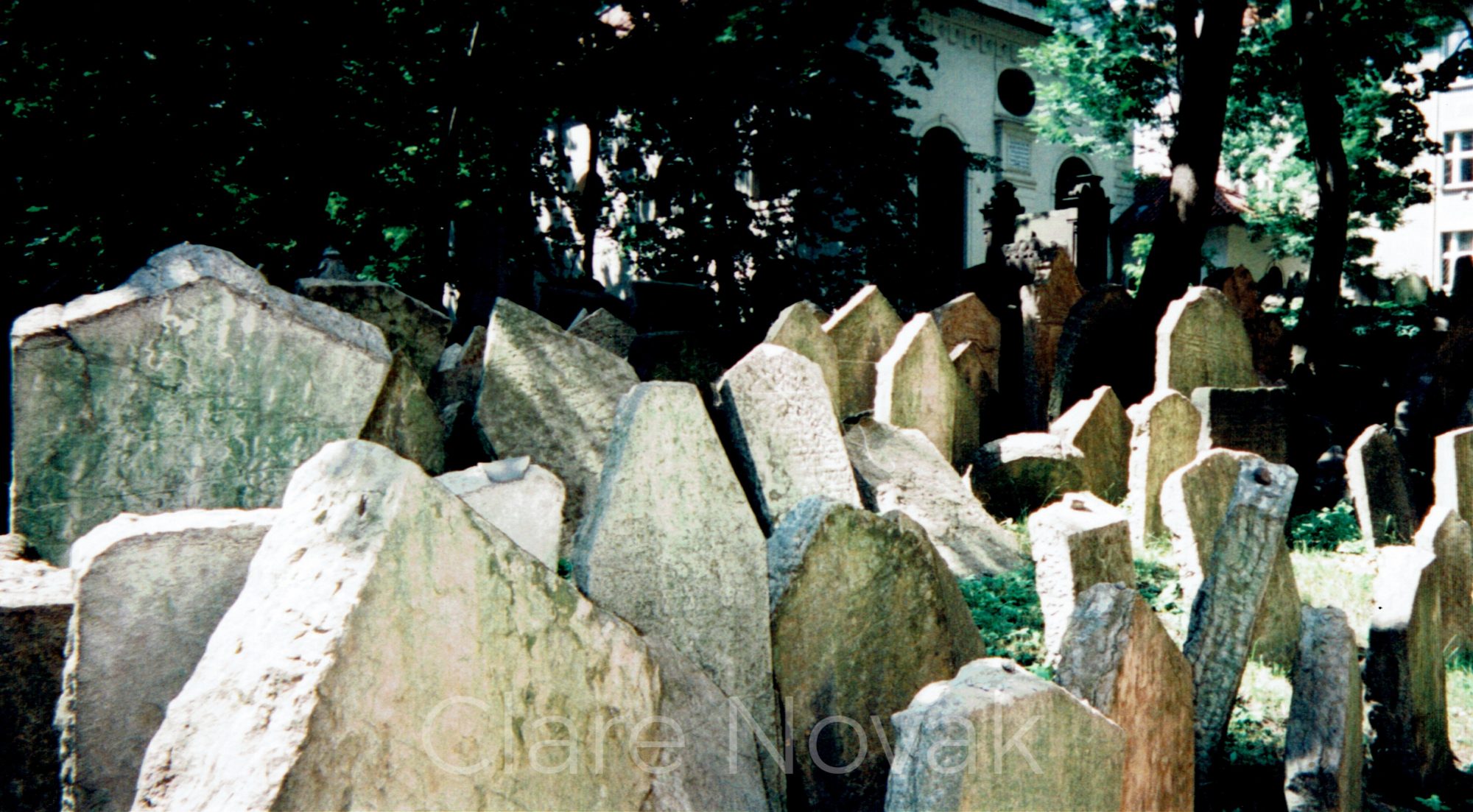 Arrived seriously sleep deprived yet heartened by how nice the Prague airport is, a good omen. Even better, both my luggage and the driver arrived. The first view of Prague is breathtaking as you turn downhill amidst a wooded area there is a sudden panorama of the entire city. The impression is spires and red tile roofs. Lovely view.

Arrived at the hotel by 7:30 am which startled the clerk; apparently nobody checks in that early but I was glad to. It’s a nice hotel and very well located by Wenceslas Square, which is not square at all but oblong. I then proceeded to sleep till noon.

The afternoon I spent with a tour group, which was a good idea since it quite literally gave me the lay of the land and the plan for the next 3 days. Take 3 major areas and do 1 a day.

It will take a long time to sort Prague out. There is just too MUCH. While Paris is full of destinations, Prague is simply full. There are small interesting things everywhere. Churches, chapels, cathedrals, cloisters, castles, synagogs, shops, cemeteries, museums and radnice (town halls). Every time an Emperor built a new section of the city, up went a radnice.

Oh, the watchword in Czech history is defenestration. Apparently when my relatives get pissed off they throw people out of the window or cut off their heads and spike them on Charles Bridge for 10 or 12 years.  You’ve been warned.

Unfortunately, what Paris delivered that Prague did not was perfect weather. Yesterday was cloudy and cool; today it is raining. Oh well, the museums it is. Last evening, walking Wenceslaus Square, there was a perfume in the air I couldn’t place until I looked up and realized I was walking under Linden trees in bloom. Immediately, my thoughts went to “Unter den Linden” although I can’t come up with the author, so I will blame Goethe. And there are roses, lushly blooming along the length of the square, which is actually a long boulevard. Red roses are trained into rose trees in one block, in the next, white and yellow roses fill the entire block.

“I ate my potatoes…”
Usually, I believe I could go a lifetime and never miss potatoes. However, the potatoes that came with my pepper steak last night were extraordinary. Mashed, but not whipped, golden potatoes came inside a flaky pastry crust. They were not Yukon gold potatoes, but golden from the butter. A cuisine to die for.

My credentials as a world citizen came through when I realized I have 4 currencies in my wallet and I only actually care if 2 of them are stolen. I was feeling sorry for Egypt when the pound dropped from 5.2 to 5.99 in less than a week and then I came here to a Croner that is 25.52 to the dollar. The Croner is the smallest unit, even the coins are Croner. The Euros I have under lock and key, as they’re the most valuable.

Wandering Wenceslas
Well, rain or no, it’s time to venture out. Fortunately, the National Museum is close by so I won’t get too soggy going over. A couple hours there and then, I’ll see how the weather is and decide what to do after that. Sat and Sun should be better and of course, the weather Monday when I’m leaving is supposed to be great. Giant Bronx cheer

The National Museum is, of course, a palace. Nearly every public building here is. The architecture alone is worth the price of admission. Grand halls and staircases, a Grand ballroom, now full of bronze busts of famous Czechs, finally marble from 8 different countries. The archeology and paleontology were excellent; ancient Czech men were found buried with their swords and buried with their horses, but apparently never with their wives.

As usual, I found the mammals disturbing. The starkness of their display in European museums brings to the fore that many animals were killed specifically for museums. The birds disturb me most. One case was marked “extinct” in Czech. I hope my ability to read some Czech is wrong but to the shame of humanity, I think it is not. The last of some species were killed for the frivolity of ladies’ hats and for museums that fought to get their specimen before the last bird was gone.

An old rock hound like me found the mineralogy much more palatable. It was also easy to figure out the Czech version of the mineral’s identification. I either recognized the specimen on sight or could puzzle out the Latinized Czech. There were a few magnificent specimens of rock crystal

By one, good weather arrived, so I celebrated by eating at a sidewalk café. For about $7.50 I had a good, dark beer, delicious thinly sliced ham and cheese chased by a crusty, hearty rye bread.

In the Ghetto
The old Jewish quarter drew my attention this afternoon. While historic churches festoon the landscape, synagogues are only in the Jewish ghetto. Although the Czechs treated the Jews better some times than others, things still got ugly. Because of ghettoizing, there is but one Jewish cemetery, confined to a small plot of land. Of necessity, plots were dug deep and people buried one on top of the other. Above ground is filled with tombstones tilted thickly upon one another.

Walkabout
The churches here are jaw dropping. In St. Michaels the chandelier alone was astounding. Words will be inadequate to the task of describing its magic. It is about 10 feet in diameter, not merely circular but fluted circular. The construction is an 18-inch deep cut brass panel hung with bohemian crystals. The candle sconces are inside the panel so that the light shines out through the crystals, creating rainbows all over the church. That description of course, doesn’t even come close; then again the postcard of it I bought doesn’t’ either. Ya gotta be there.

It was impossible to stop walking. Every time I felt tired, there was something just around the corner and I’d think, Well, I’ll just go there. I walked from 9 am till 6 pm without even stopping for lunch. Two churches, St. Ignatius and Sts. Cyril and Methodius, a town hall, two Christmas presents and a trip back to the hotel for warmer clothes and all before noon. Sts. Cyril and Methodius had the richest history, being the site of the three-day stand off between the Nazis and the men who assassinated Gen. Heyrick. People bring flowers still to honor the Czech resistance. The Czech hidden in the church committed suicide rather than be taken by the enemy. In retaliation, the Nazi’s, upon mistaken intelligence, attacked the town of Ludivice, thinking people there had helped in the resistance. First the Nazi’s shot 199 men, then packed the women and children on trains to concentration camps and finally blasted the town our of existence. In all 5,000 Czechs died over the assassination of one German officer.

At Hracny Castle, the old castle, the new castle, the golden lane, THE Powder Tower. Now why am I going on about a silly old Powder Tower? Only because it is where Tycho Brache and Johannes Keppler did their astronomical work and also worked with Elizabeth I’s alchemists, Dee and Kelly who promised the Bohemian Emperor immortality. Of course, Brache and Keppler popped up again the next day at the Baroque Library and Astronomical Tower. There were 2 astronomical clocks, one geocentric, Brache and one heliocentric, Keppler. I know, I know, where do I come up with all this stuff? Every time you ask yourself that question, just assume I read it some place.

By six, I committed to a boat ride. Figured there wasn’t far I could walk on the boat. Lovely view, especially with the late afternoon sun. On the boat ride I decided I wanted to stay and eat on Kampo Island, where the boat docked and I saw two restaurants on the river. After the boat docked, I went to the closer of the two restaurants. Excellent choice, Madam! They were apologetic that all the seats along the river were taken but if I didn’t mind the side porch…

The side porch was a lovely little deck built around two mature chestnut trees and overlooked a small canal that runs through the island. The meal was exquisite from the cabernet to the last spoonful of current/melon gazpacho with cardamom ice cream. The only thing I wanted for was company.

The Baroque Library was one of today’s happy finds. The library is stunning with 20,000 volumes dating from the time of Brache and Keppler. It is one long room with the stacks built against the walls, on both the entry level and the balcony. The center contains large globes made all over Europe and all about 300 years old.

The other happy find was the Mucha Museum, artist who started the art nouveau movement. He is well known for his theatrical posters for Sarah Bernhart.

Today was leisurely as my feet are worn out. It is time to come, oops…. Almost forgot the Municipal Hall, the most beautiful building in Prague. The Municipal Hall is an art nouveau/art deco masterpiece and each room (now restaurants) is different and stunning. In the evening I attended a saxophone quartet concert in the Art Nuveau Hall. They played Gershwin and other American jazz. For an encore they did a percussion piece on the four saxes. Yes, percussion piece; they tapped the finger keys.

Farewell
On the way to the airport, I got “Novak, that’s a common Czech name.” If I had 5 kroners for every time somebody said that, I’d have a suitcase full of kroners and still be broke.

Oh, I forgot to tell you about the 2 fossils and Ladislaw Novak. Two trilobyteish fossils were named Turrilepas Serrata Novak and “Hyolithes” giganteus Novak. Ladislaw Novak was a choreographer around the turn of the century.

Oh, and there also was….

Sitting now in a random restaurant awaiting my venison. Yes, I am eating my way through another country another time.…