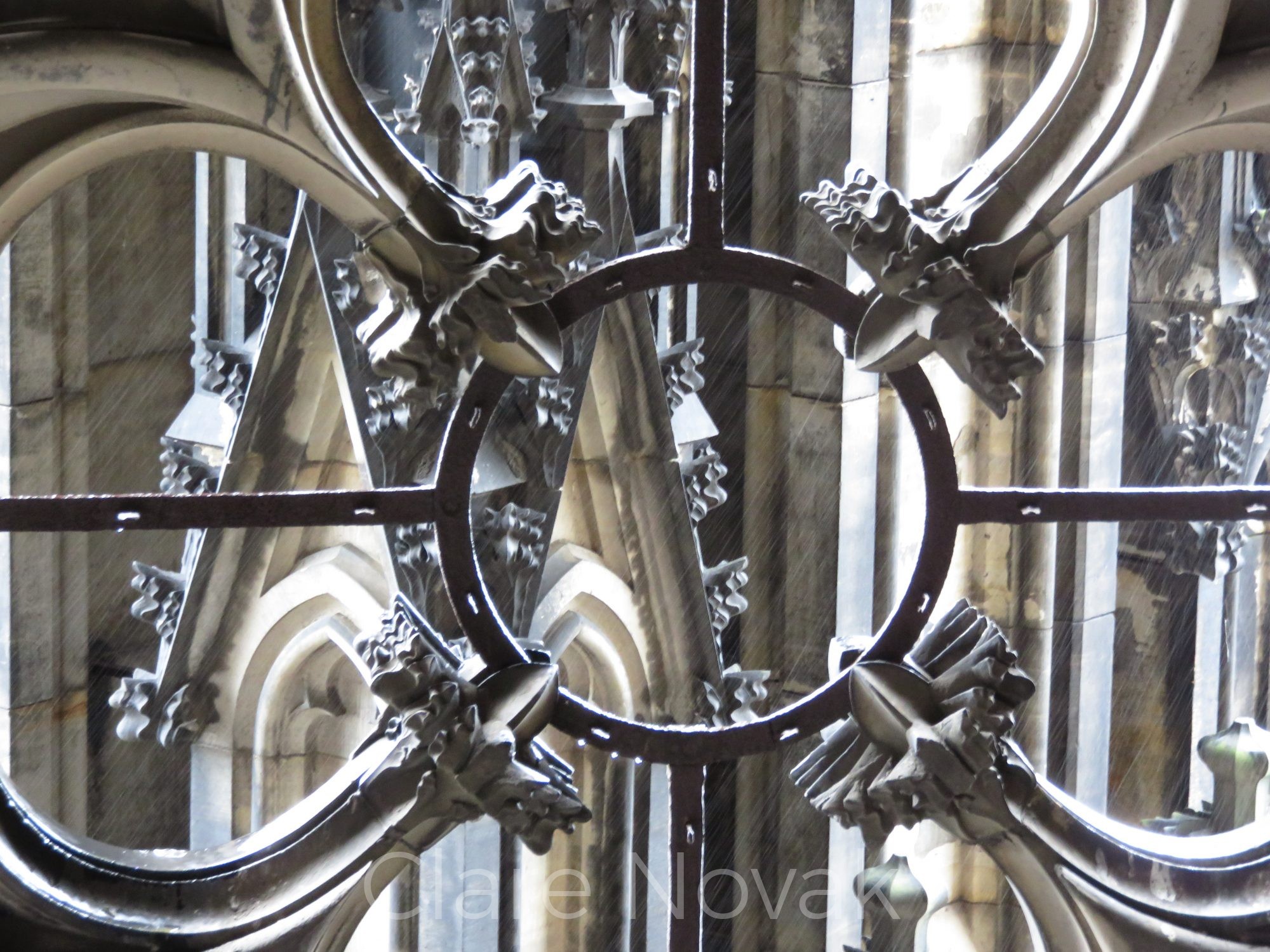 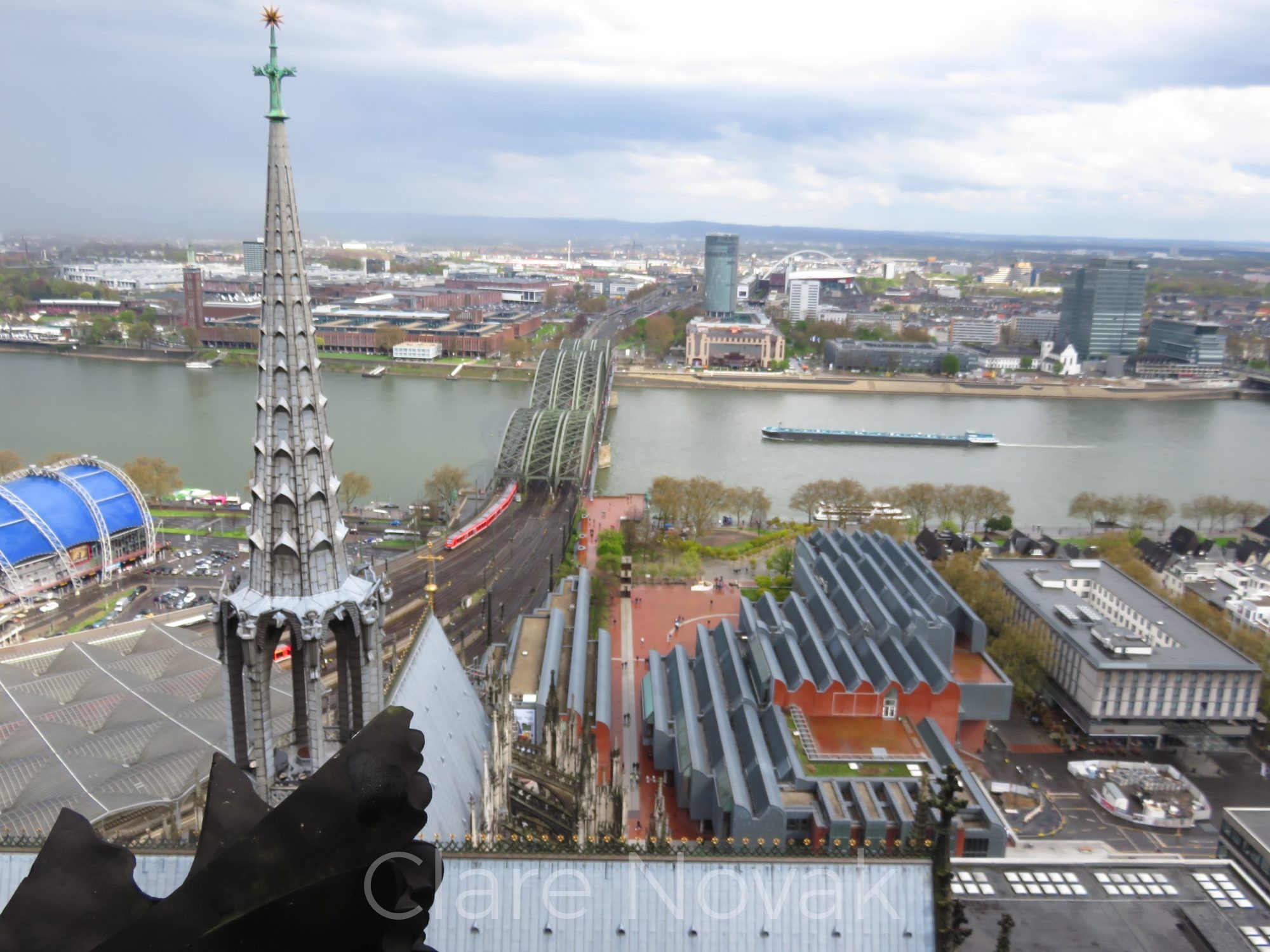 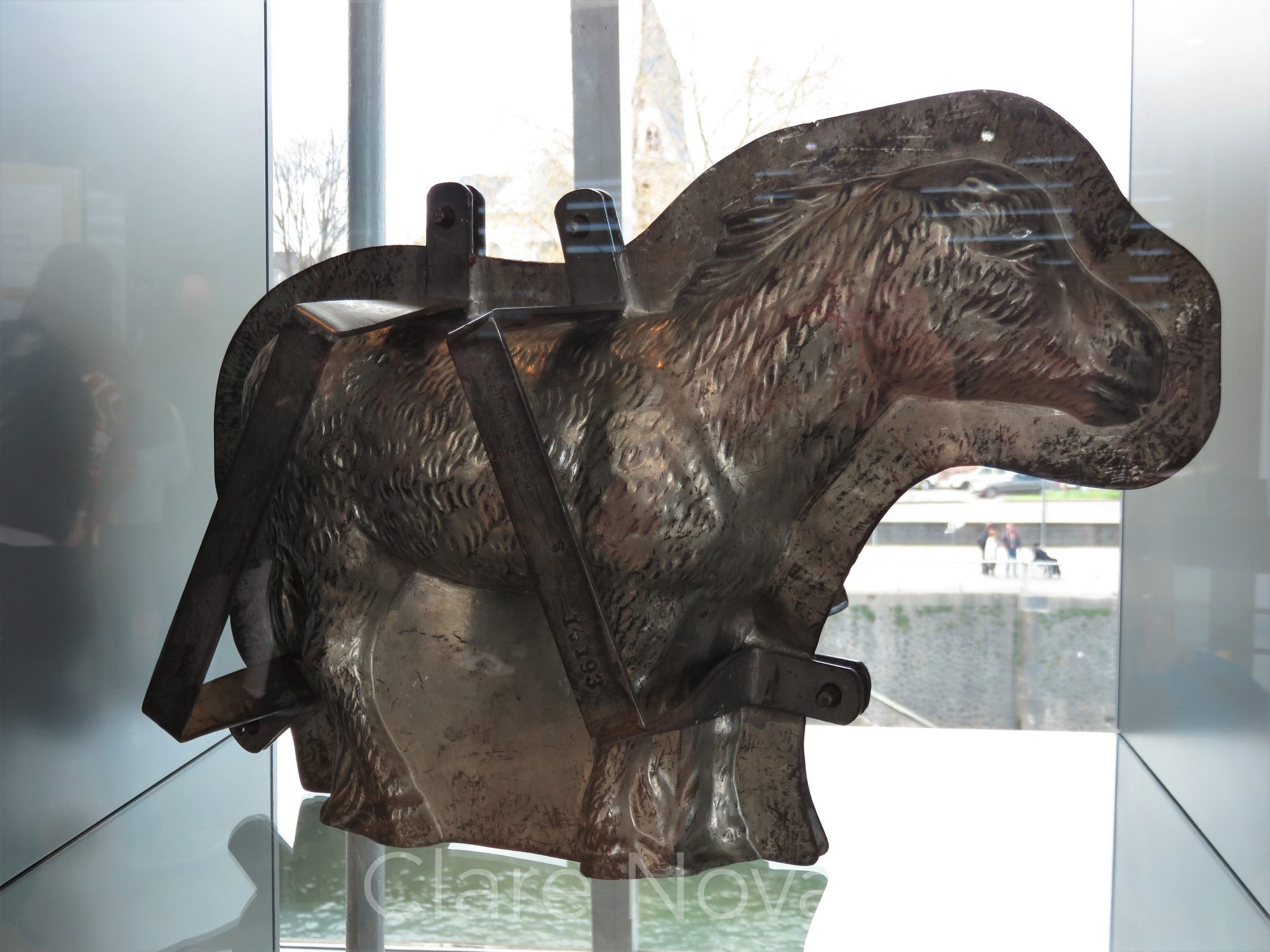 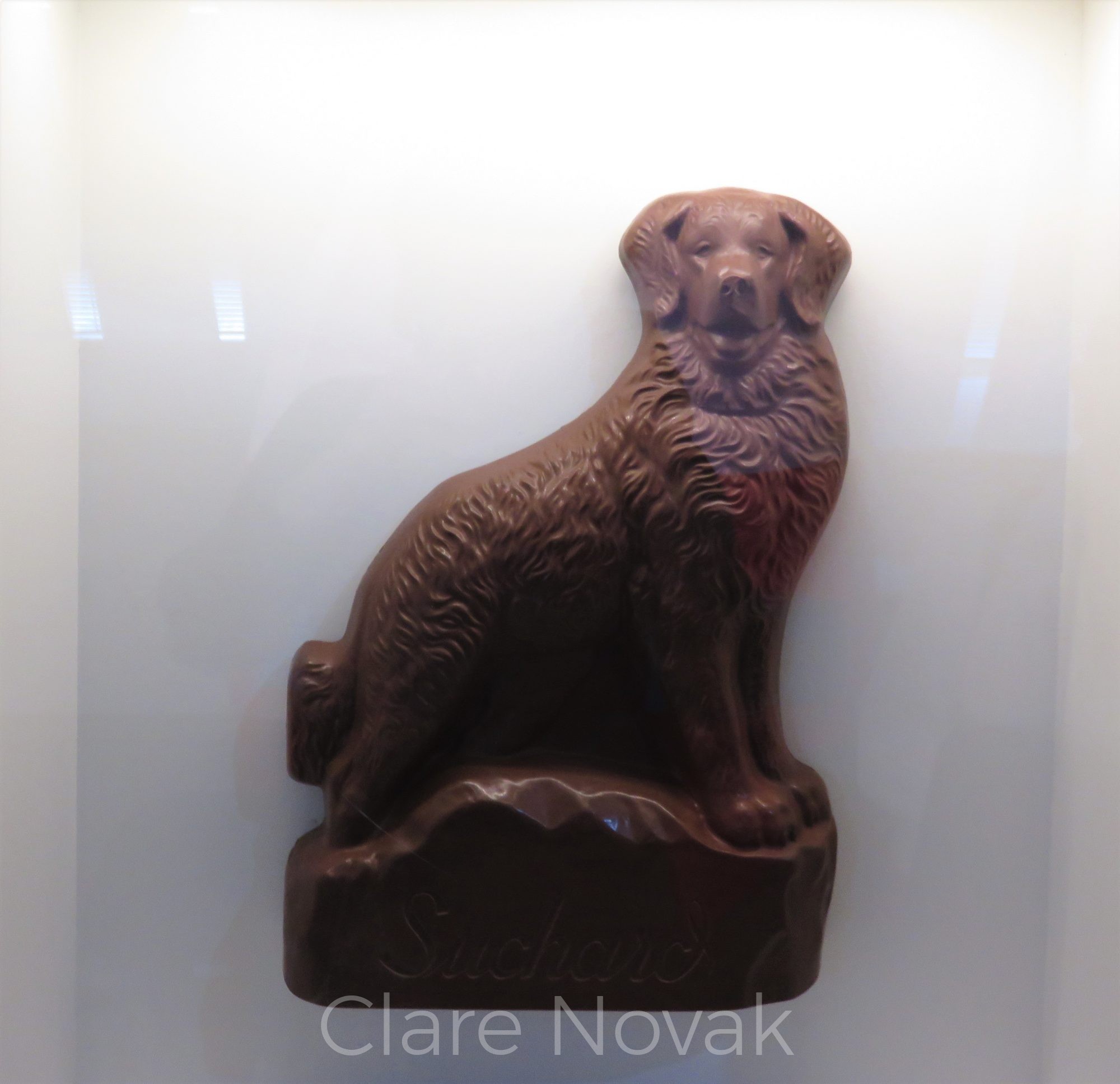 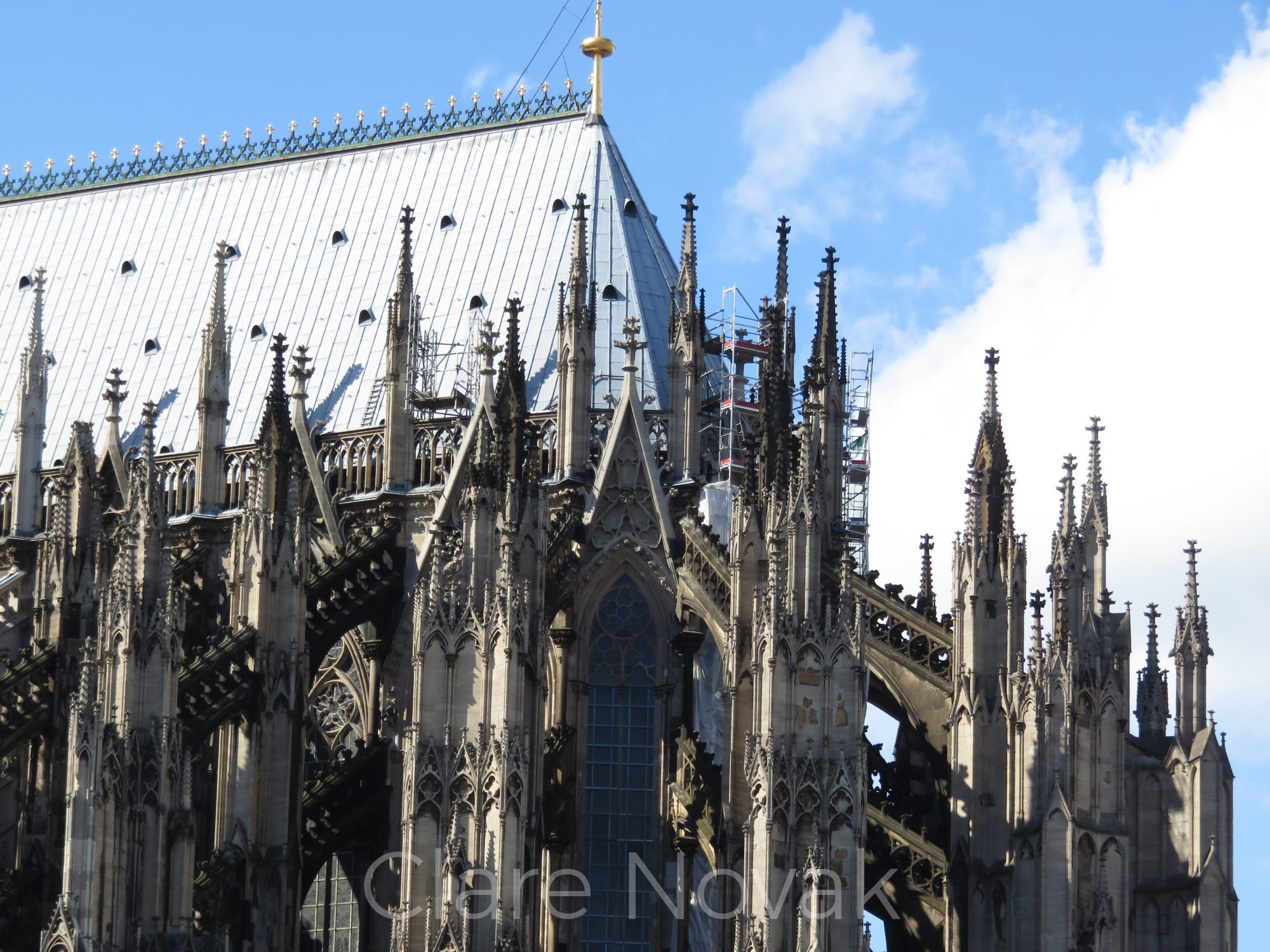 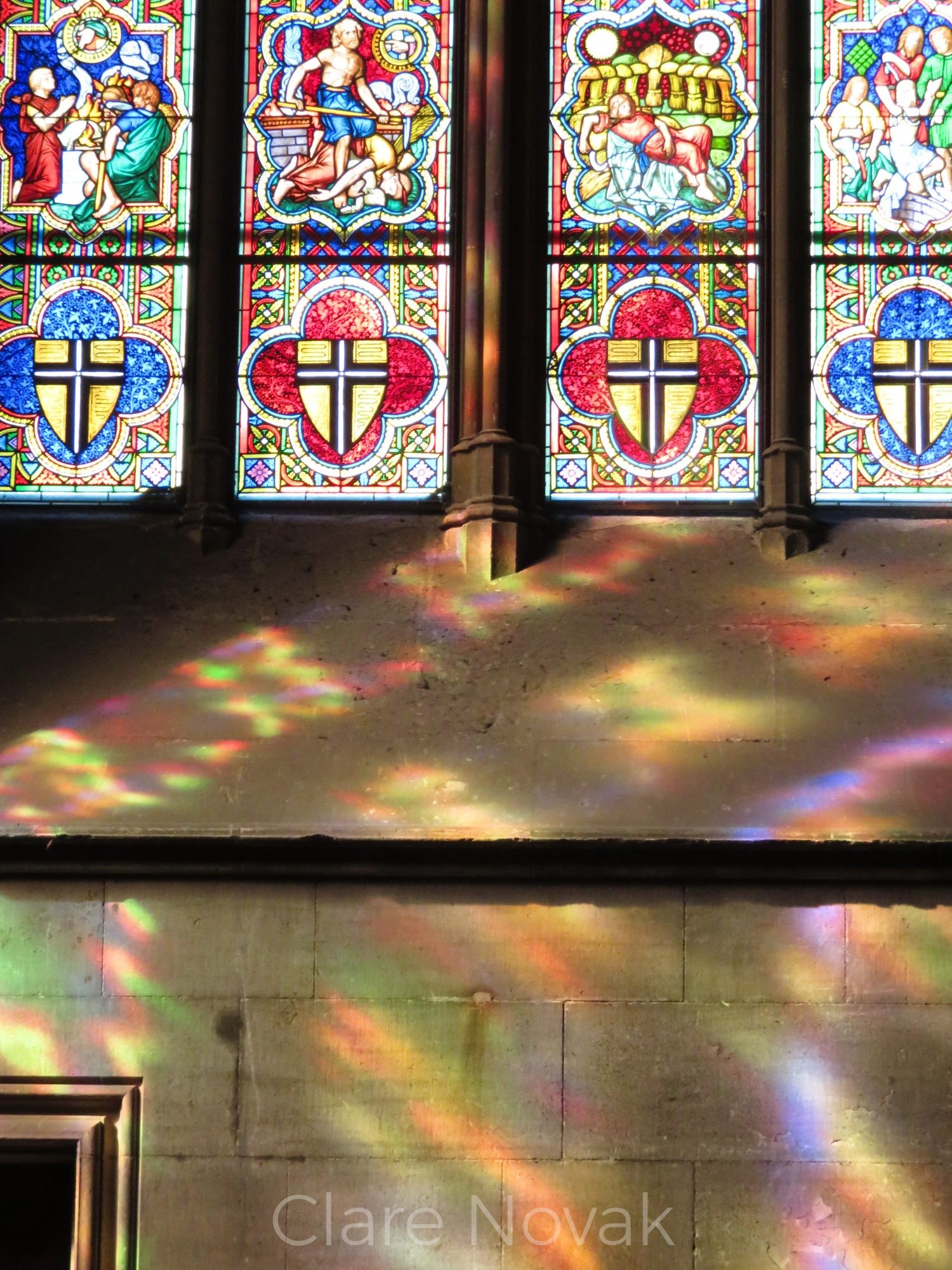 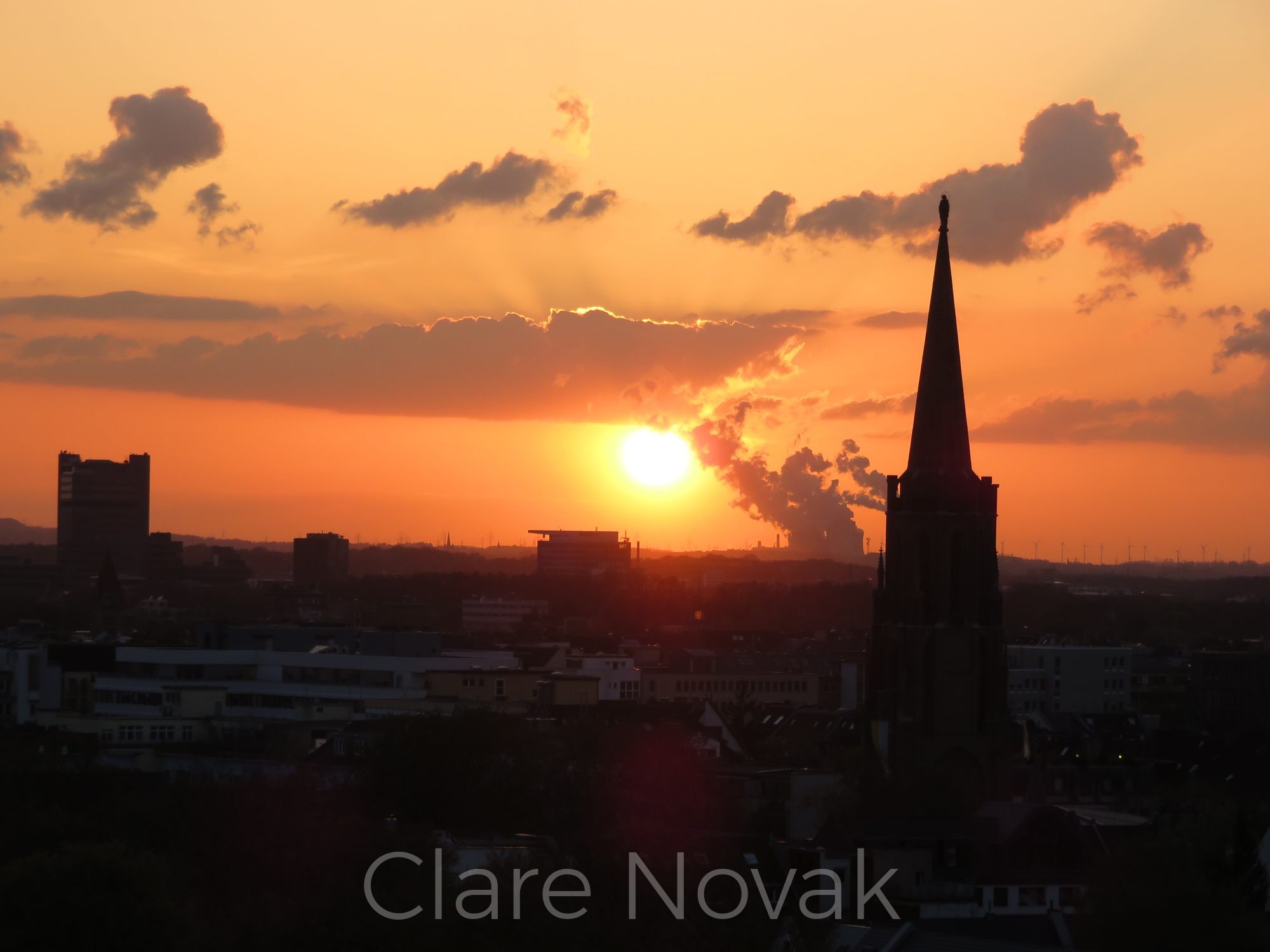 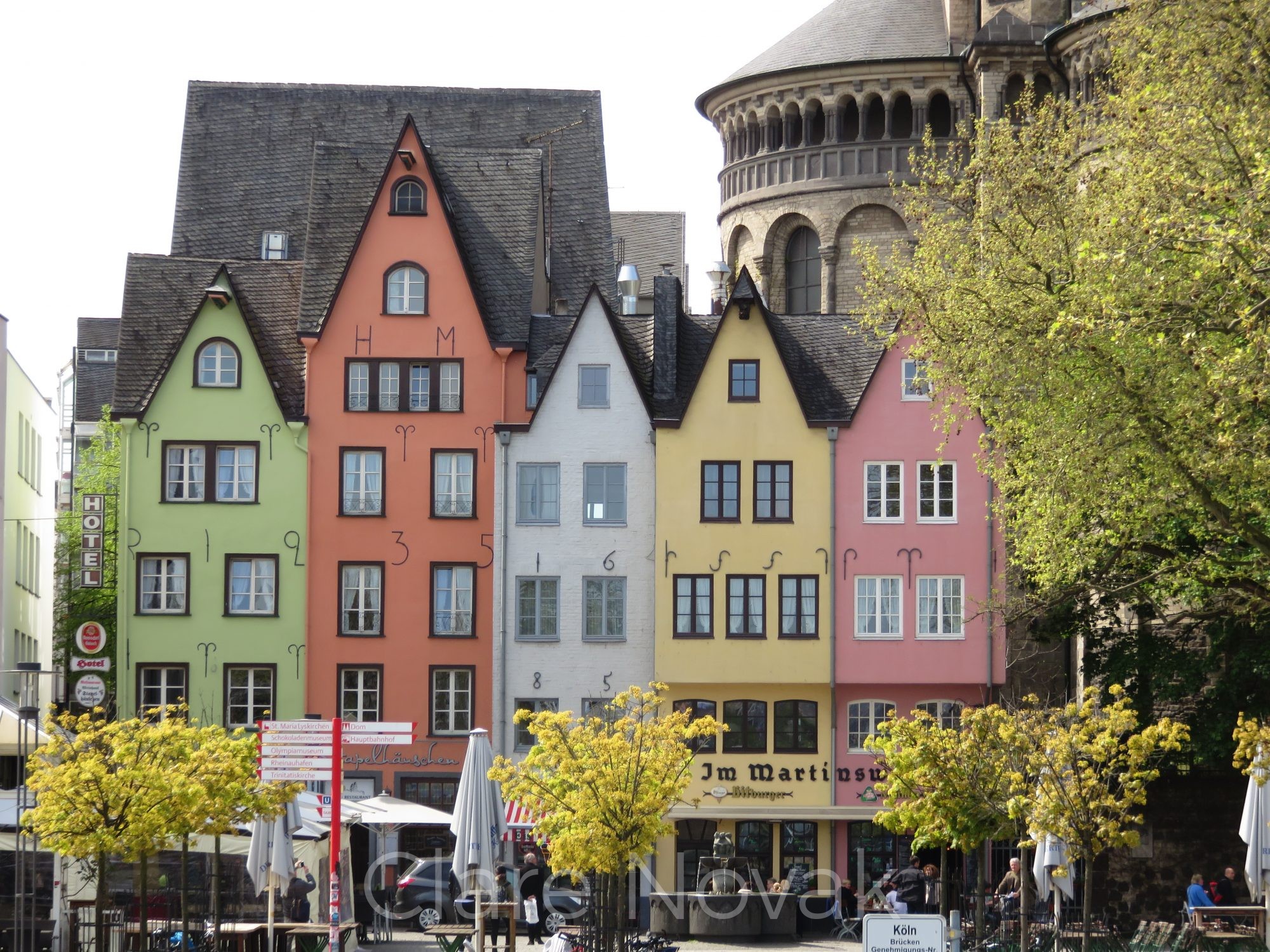 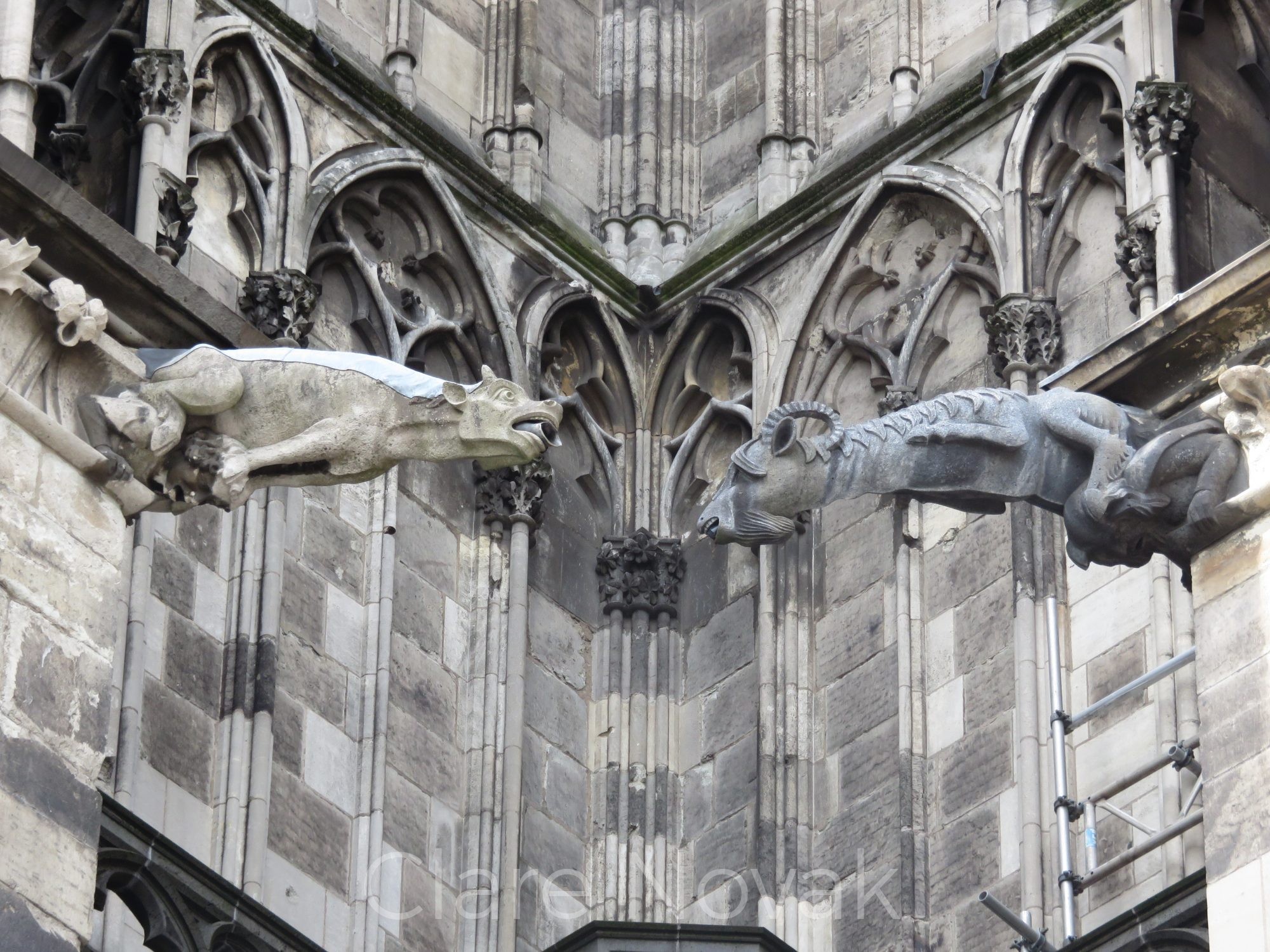 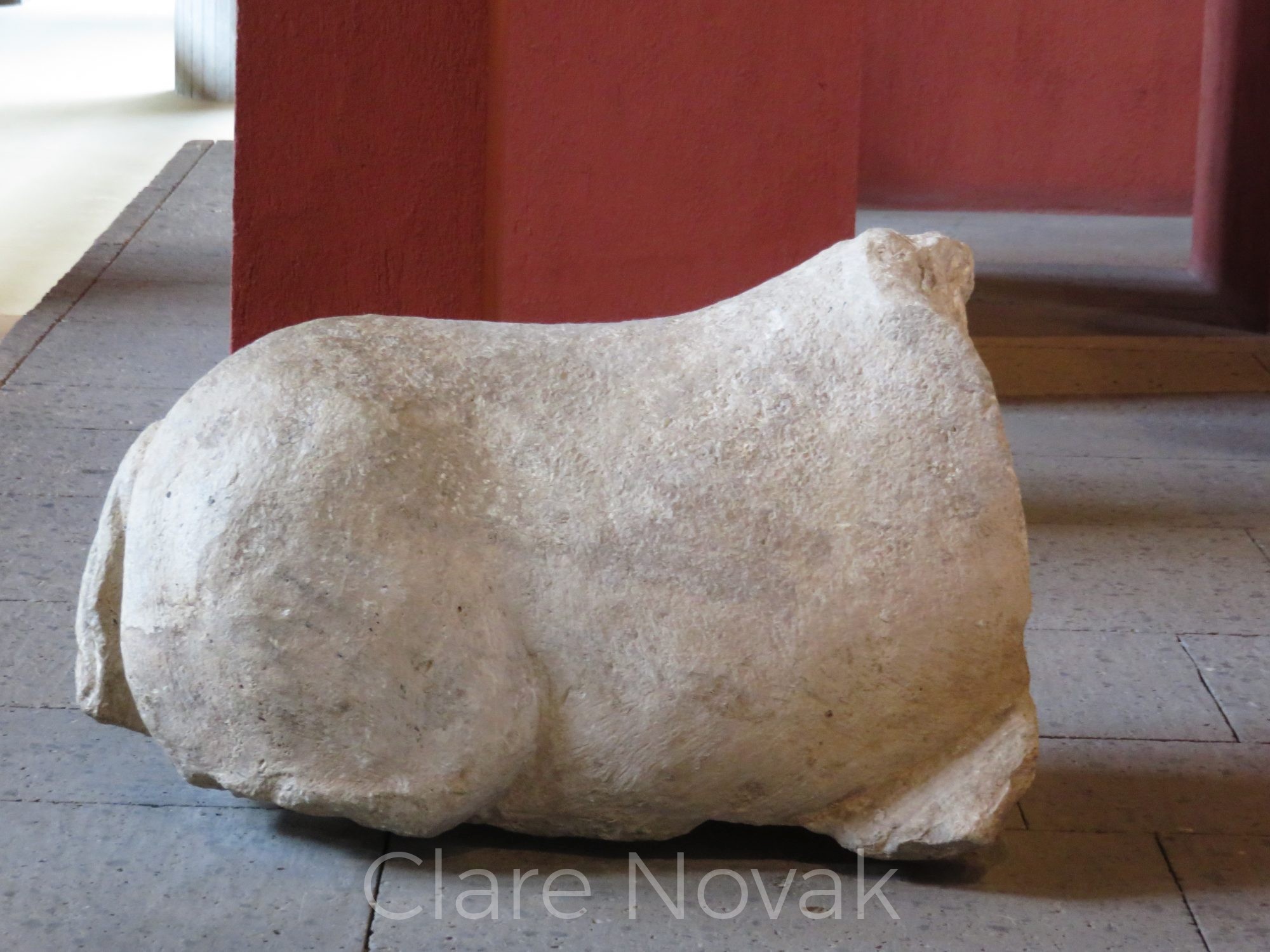 Germany needs a better PR person, especially regarding chocolate. Germany is far and away the largest producer of chocolate in the EU but when you mention European chocolate to an American, we blurt out Belgian, then Swiss then maybe Italian. If you ask, “what about Germany?” Most will reply, “Does Germany make chocolate?” Yes, and absurdly good chocolate at that, just ask my hips.

The chocolate museum was more than expected as it touched upon all the facets of chocolate manufacture from plant to table, history from new world to old with a lovely collection of Mesoamerican artifacts and old, quite ornate packages in a replica shop. Old time chocolate vending machines were clever and one would still dispense although modified to accept euros rather than marks. The chocolate molds were quite intricate and some produced chocolate figures over a foot tall. My personal favorite was the chocolate St. Bernard barely edging out the two-foot donkey for the number one position.

Ah, and the free samples, my favorite being the wafers dipped in a fountain of molten chocolate. And then there was the store with marijuana chocolate, the perfect combination of the munchies and a way to satisfy them. The cafe was also wonderful and don’t get me started on the molten chocolate cake with tart cherry sauce.

I am thoroughly in love with German food and you can, no doubt, hear my waistband moaning, “genugh, genugh.” The bread is exquisite, crusty and, delicious. A simple roll is no simple thing; the crust breaks like a seed freeing a sprout to the airy center of the staff of life, and that’s just the white bread. Ah, the black bread with walnuts, and the rye with pumpkin seeds, ah the dense and chewy seed bread all too good to need butter. While I’d noticed the small jars marked chocolate next to the Nutella, I’d not tried them until the last day. Thinking to treat myself I spread the thick, slightly dark chocolate on the afore described roll and was transported by a choir of angels directly to heaven. Chocolate for breakfast, life is good.

When in Germany in asparagus season, eat asparagus. I had three meals in six days that were mainly asparagus. Tonight’s being the best of all with a log pile of white asparagus in a light cream sauce and just a hint of shaved dried ham topped off with two delightfully crisp glasses of the local Riesling.

Had my share of wursts as well. Thursday evening Joe and I agreed to meet up for dinner. He had scoped out two restaurants and we decided to go for the one with “tasteful sausages.” They were indeed. That sausage was as close to the heavenly kielbasa of my childhood as I can remember. And German sauerkraut? It’s not that crappy stuff we eat in America.

Did I do more than eat my way around Cologne? I did. The Dom, the cathedral, is the icon of Cologne and the first destination of every tourist, including myself. It is a singularly impressive structure and for that, somewhat impenetrable. I searched for views and ways to bring it into a human scale, a way to connect emotionally and visually. After taking in the interior and being awed and uninvolved, I decided to climb the bell tower steps. It was a strenuous, cold and damp endeavor to the bell. From the bell to the pinnacle, the modern metal steps were slippery with drizzle but having gotten to the bell level, I was determined to summit and I did. The view was spectacular and somehow the gray drizzle made it a more intimate experience.

It is impossible to do anything in downtown Cologne out of sight of the Cathedral. Each time I walked by, I tried to find a special view, a unique angle, some way to take a photo that would capture the feel of the place rather than its iconic facade. Today I believe I did, after several days of refusing to take another cathedral photo.

During those days though, I did find the cathedral museum. It is not obvious to the casual passerby with its unmarked entrance. In museums worldwide, I’ve often smirked to myself and thought the Mel Brooks line, “It’s good to be the king.” This museum taught me, “It’s better to be the bishop.” Yes, my feet are heating up as I slide closer to hell for that. None the less, it’s true. The wealth of bishops, measured in their golden staffs, cloth of gold chasubles, and monstrances of gold so thick with gems the gold is nearly invisible, lets me understand the bloody revolutions against the church. One monstrance had no fewer than a dozen different types of gems: Emerald, ruby, sapphire, star sapphire, garnet, amethyst, peridot, amber, topaz, diamond, pearl, turquoise, carnelian, aquamarine and stones less easily identified, perhaps green and grape garnet, citrine, and what looked like tanzanite although I don’t know that tanzanite was on the trade routes then. Blatant wealth overshadowed the reliquary of the skulls of the three magi; it was by comparison, a simple box.

There is much more to this story and it must wait for another day. Four fifteen will come too soon and so I must catch some sleep before it does.

Unfortunately, the otherwise delightful little hotel I moved to had a rock-hard bed. I slept little if at all, unable to find comfort. The good news is I was already awake at the 4:15 alarm. In recompense, Cologne has the decency to be seven minutes from the airport at that hour on a Saturday morning.

Originally, Monday was my departure and while I had contemplated a number of day trips over the weekend, I’m glad I never booked them. On Wednesday night, dad entered the hospital again, having fallen. The details are still sketchy and I’ll find them on arrival. Based on that, everyone mobilized to get me home soonest which is this morning.

Once the flights were rebooked, I spent my day Friday. It was noon until I got settled in the new hotel. Given the cancellation policies it was just easier to move for one day. Eventually I wandered across the bridge and went into St. Mark’s and quietly stood in the back during a service for the nuns and priests. Truly I have not heard such angelic singing in a Catholic Church–ever.

One the way out, a friend and her mom were on the way in. They invited me along on the hour-long river cruise. It was a delightful way to spend time. After the strenuous endeavor of watching scenery go by, we found it necessary to have an ice cream and rebuild our depleted constitutions. As we parted, they to the hotel to catch the airport shuttle and I to do something undecided, I noted people walking their polite German dogs. German dogs never pull and tug, expecting everyone to pet them, and never, never do they jump up on passers-by.

With a few hours before museum close, and with tepid enthusiasm, I headed to the Roman Museum. After all, I had already seen more of the Roman Empire than most Emperors. It was well that my cynicism didn’t stop me. There in front of the museum and on the back side of the cathedral was the connection. Below street level a stone masonry shop repaired the broken saints and displaced gargoyles. These were on human scale, small enough to grasp. Above, fanciful animals stretched across a corner for conversation only to be shouted at by an angry gnome. The saints made no comment, yet somehow released me from further obligation to photograph the cathedral.

Content, I moved on to the museum and was delighted not to have missed it. It has perhaps the best collections of pottery, glass and jewelry from the Roman era I’ve seen. The two nearly complete mosaic floors, one of which is the philosophers’ floor, were alone worth the admission. At the display of stone grave guardians, a I laughed and immediately took a picture. Now I have definitive proof that it is possible to be a horse’s ass and still be part of history. It gives me hope.

It’s a sign when one of the first things you hear about a city is, “When you come back you…

Ah and it only took me 4 boarding passes and two days to get here. Last night at Corlu airport,…

Went to the Van Gogh Museum today. His spirit was so present I swear I could have plunged my hands…