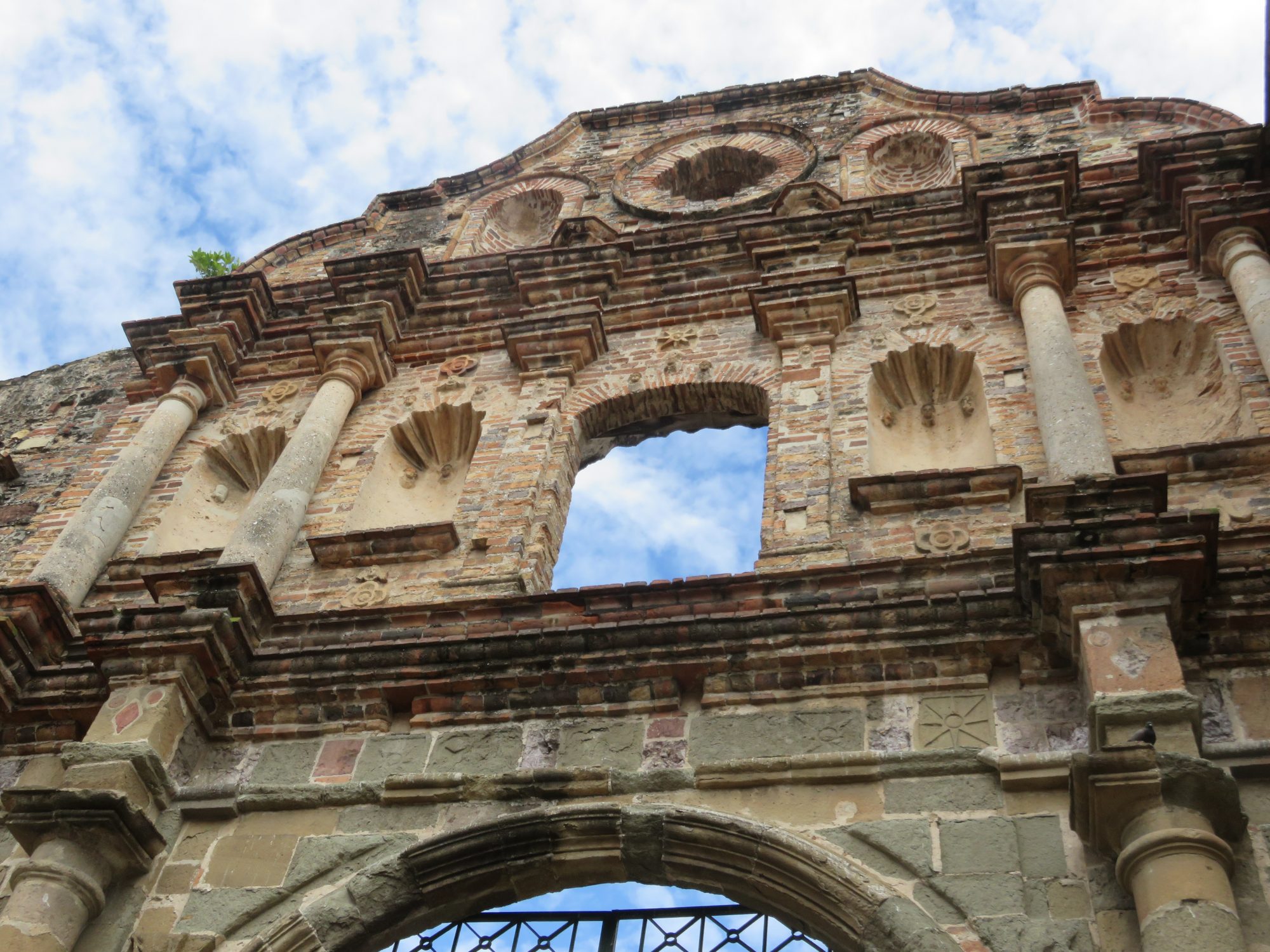 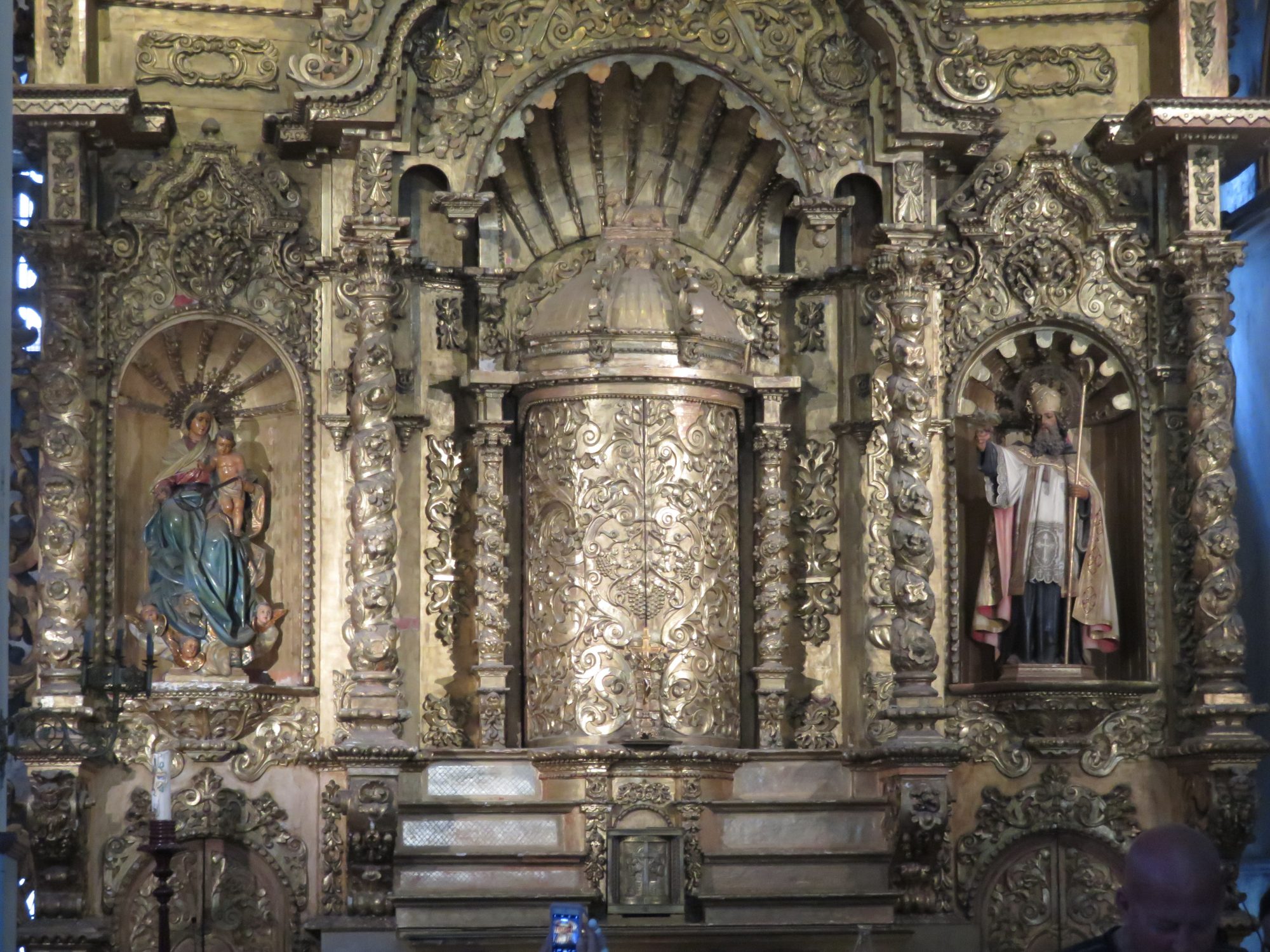 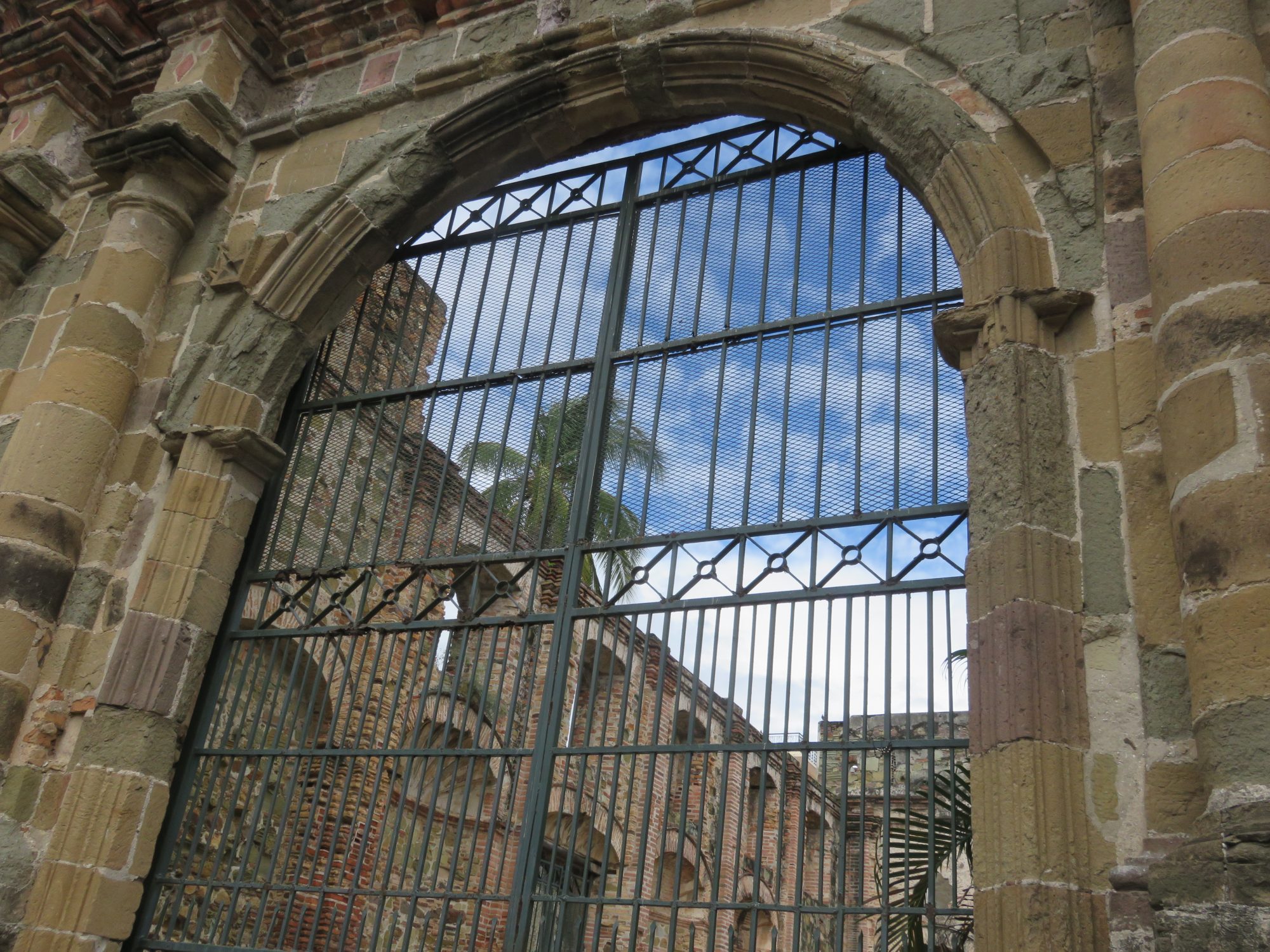 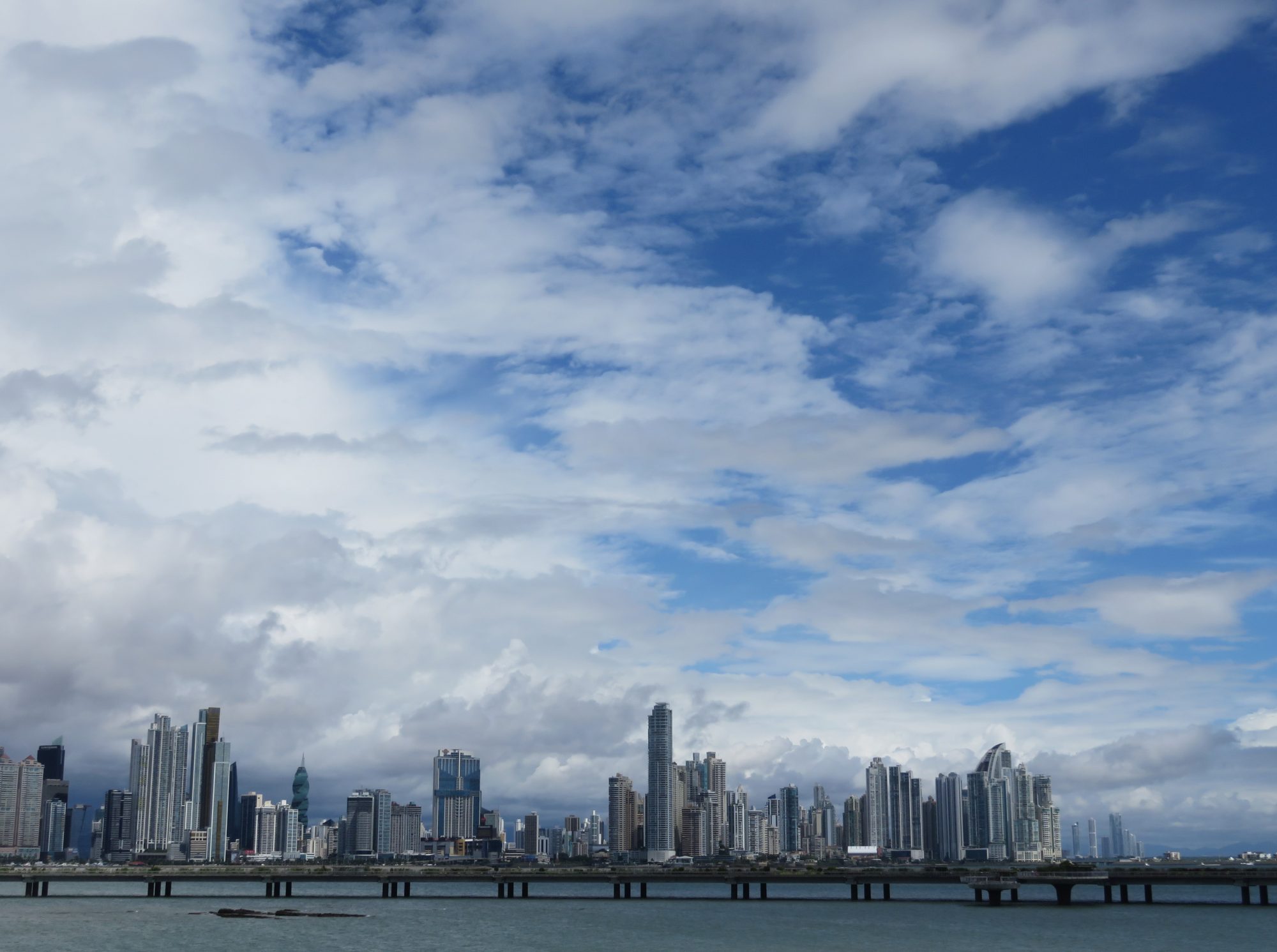 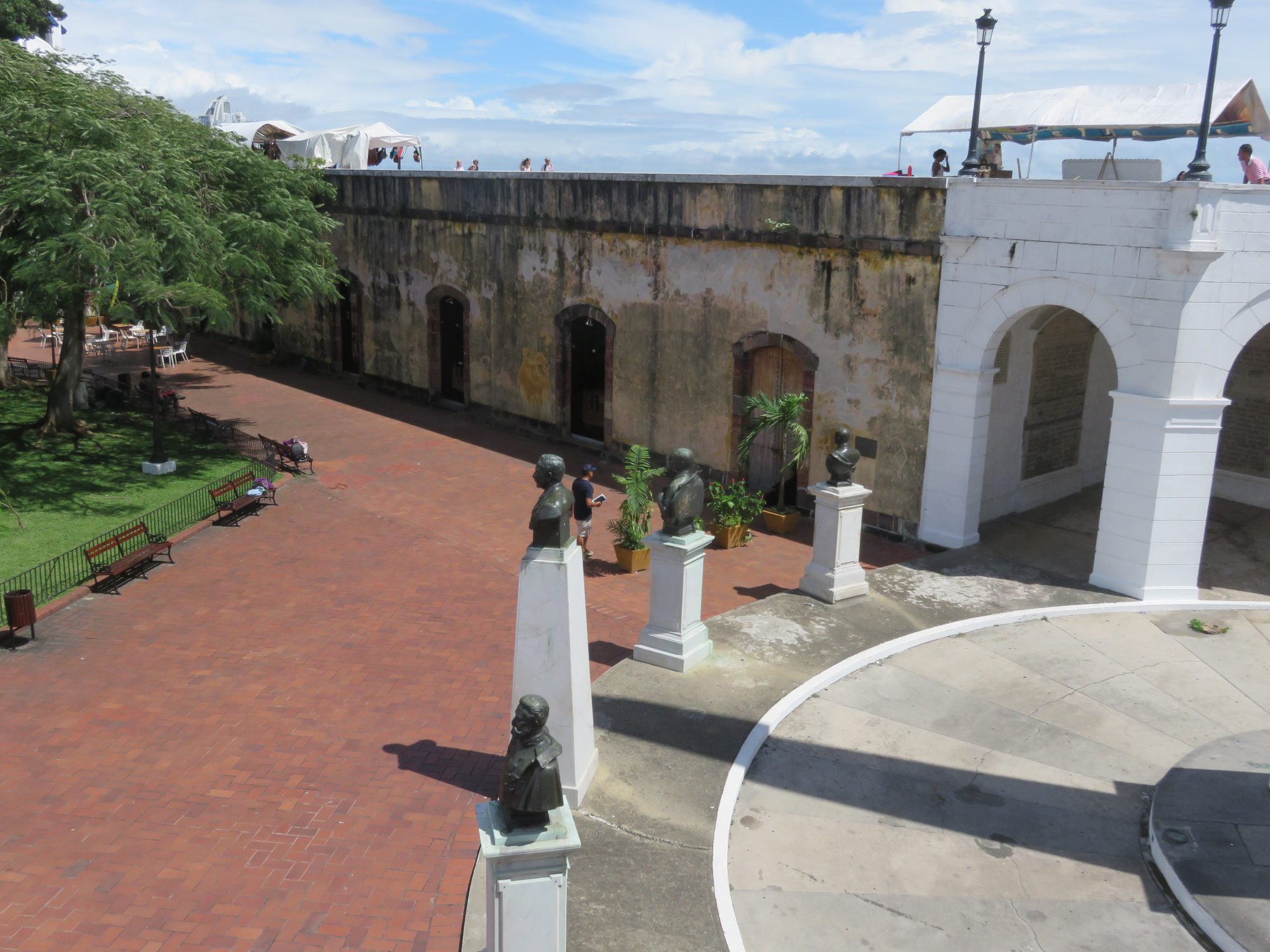 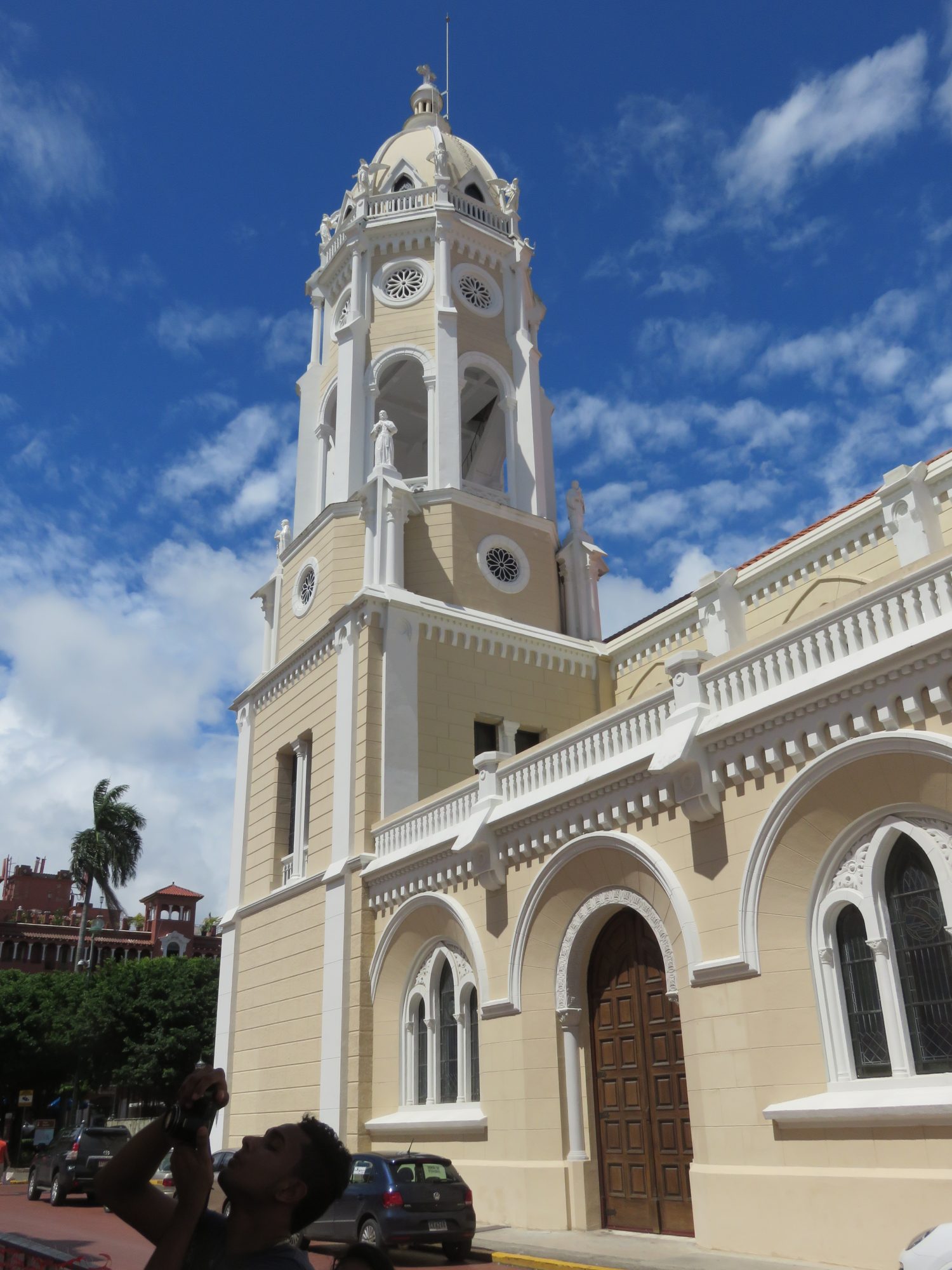 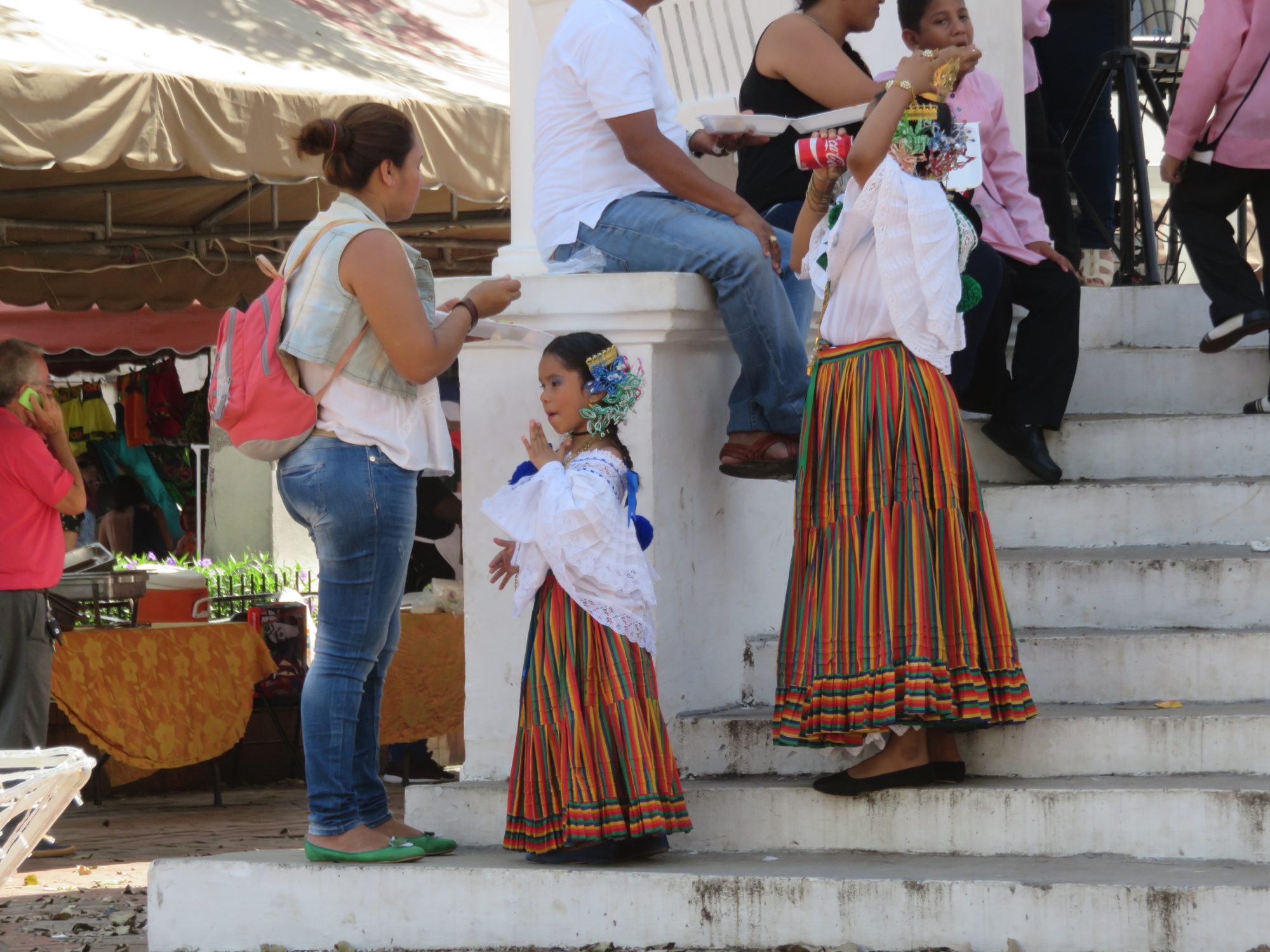 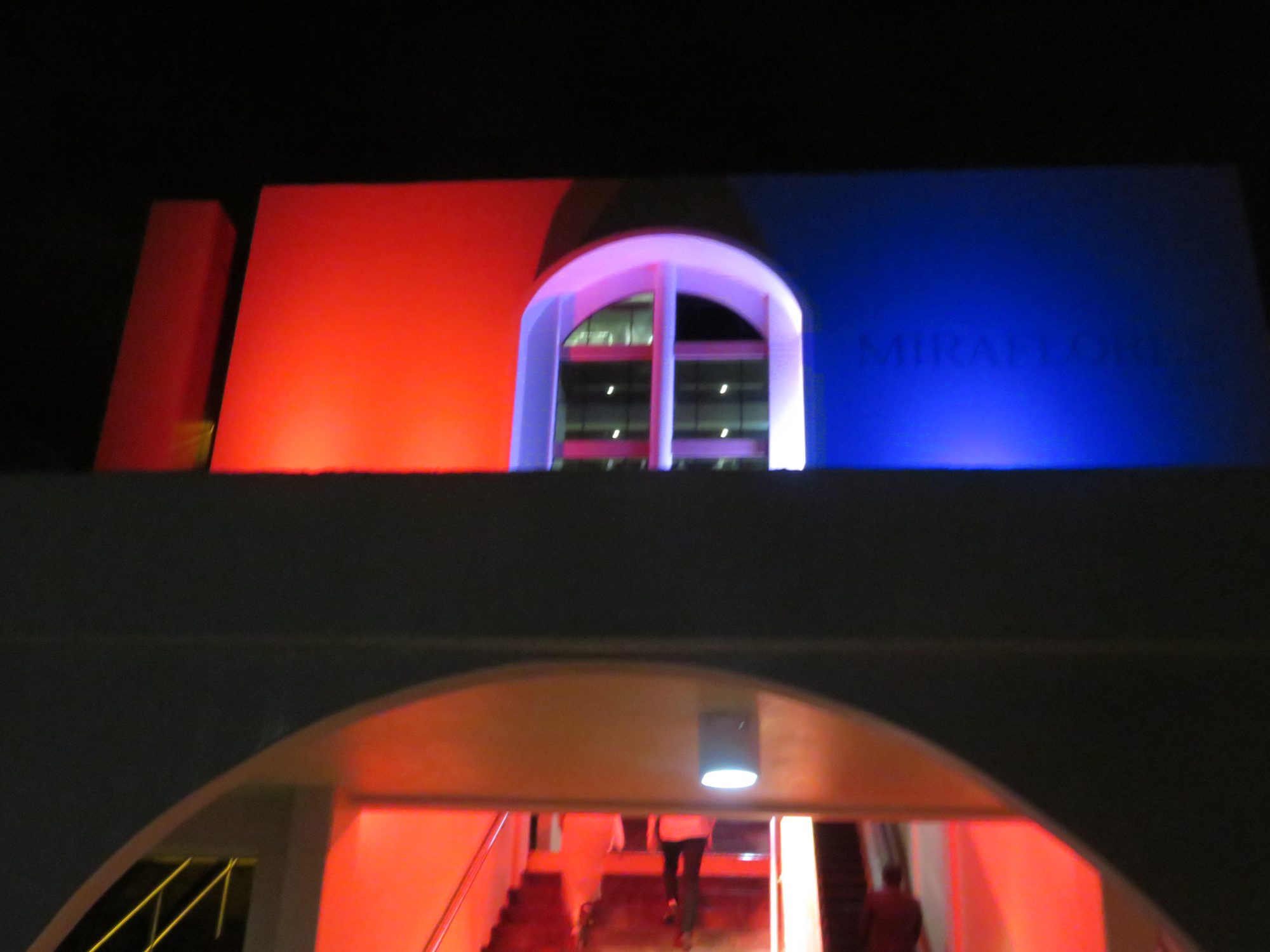 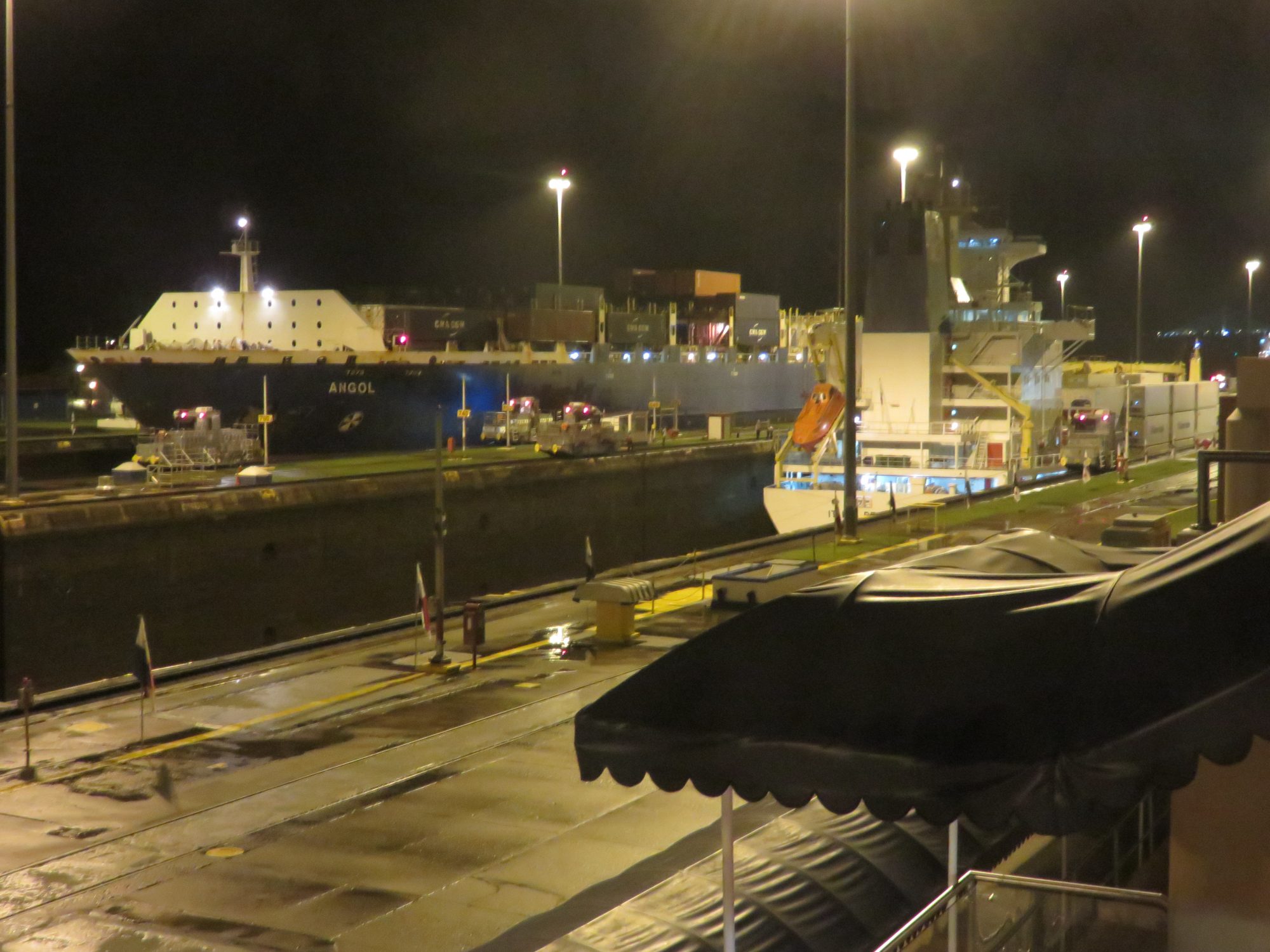 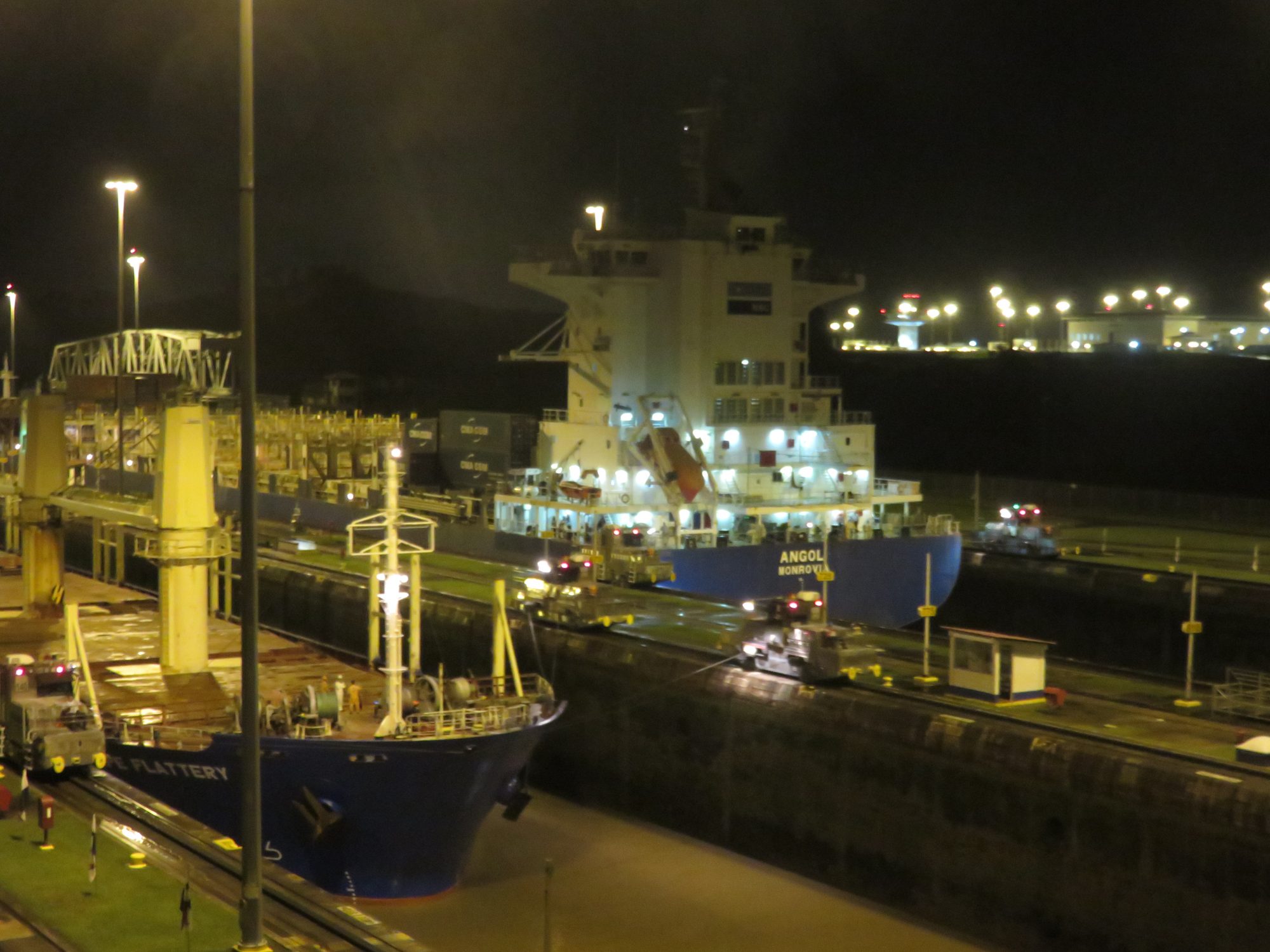 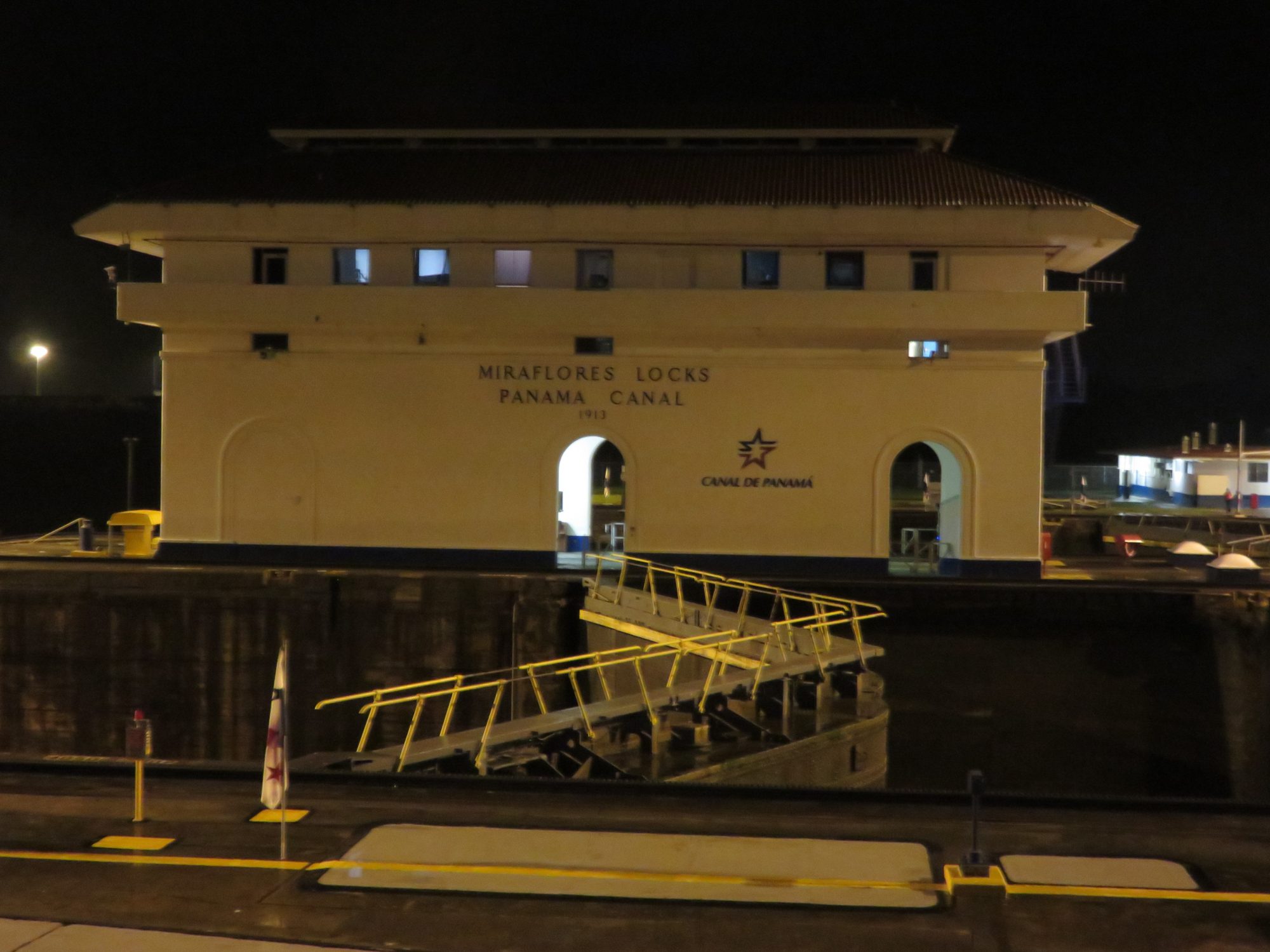 If I were by some accident of fate to become a philosopher, Clare the Wanderer seems right. When I woke this morning, I was unimpressed with Panama. Muggy, hazy and hot did little to make the scenery look any better than central Florida. From this location, the canal looks like a sluggish river with out-sized toy boats. As I waited for the Nigerians to arrive, I walked about but there was little to see as our hotel is well out of the city.

Around 10 when the weather cleared, a cab obligingly dropped me in Casco Antiqua, a place I pulled out of a tourist book, literally, in the correct sense of the word. I ripped the page out of the book so I could point to where I wanted to go. My Spanish is as poor as the cabbies’ English.

As the fronts changed, the sky became a dramatic backdrop for the old architecture, churches and forts. Four old churches were impressively gilded, painted and statued. The tourists snapping selfies seemed to have no sense of the purpose of a church nor the role of the churches in the lives of hundreds, if not thousands of parishioners who bowed their heads there since the sixteen hundreds.

The old French fort served as a high point from which to see the modern skyline of Panama City. The glass palaces are impressive but it was the blue sky and wild clouds that displayed them like jewels in a store. On the opposite side were ships lined up for their turn through the canal like cows to milking.

After an interesting hour or so in the Canal Museum I came out to high winds and dark clouds. Quickly, I returned to a vendor’s table and bought a necklace at an even lower price as she realized the clouds would soon shut her down for the day. While I had intentions of eating al fresco, I had the great good sense to duck into a restaurant minutes ahead of a down pour. The food was good and the beer even better though both were dulled by the drum kit techno pop blaring out. At least ESPN Red Zone was on and I could get a quick football fix.

The rain abated for a few minutes and I worked my way back toward Herrera Square for a cab. Within minutes, the umbrella became virtually useless in the heavy, slanted rain. Tourism ended, I found my paper with the hotel letterhead and hailed a cab.

Park 6 Canyonlands beckon the adventurous. I would, with enthusiasm, have rented a four-wheel drive vehicle and headed down the…

Tidbits from PA Trekking: I seldom go to Struble Trail as it is both paved and heavily used but for…