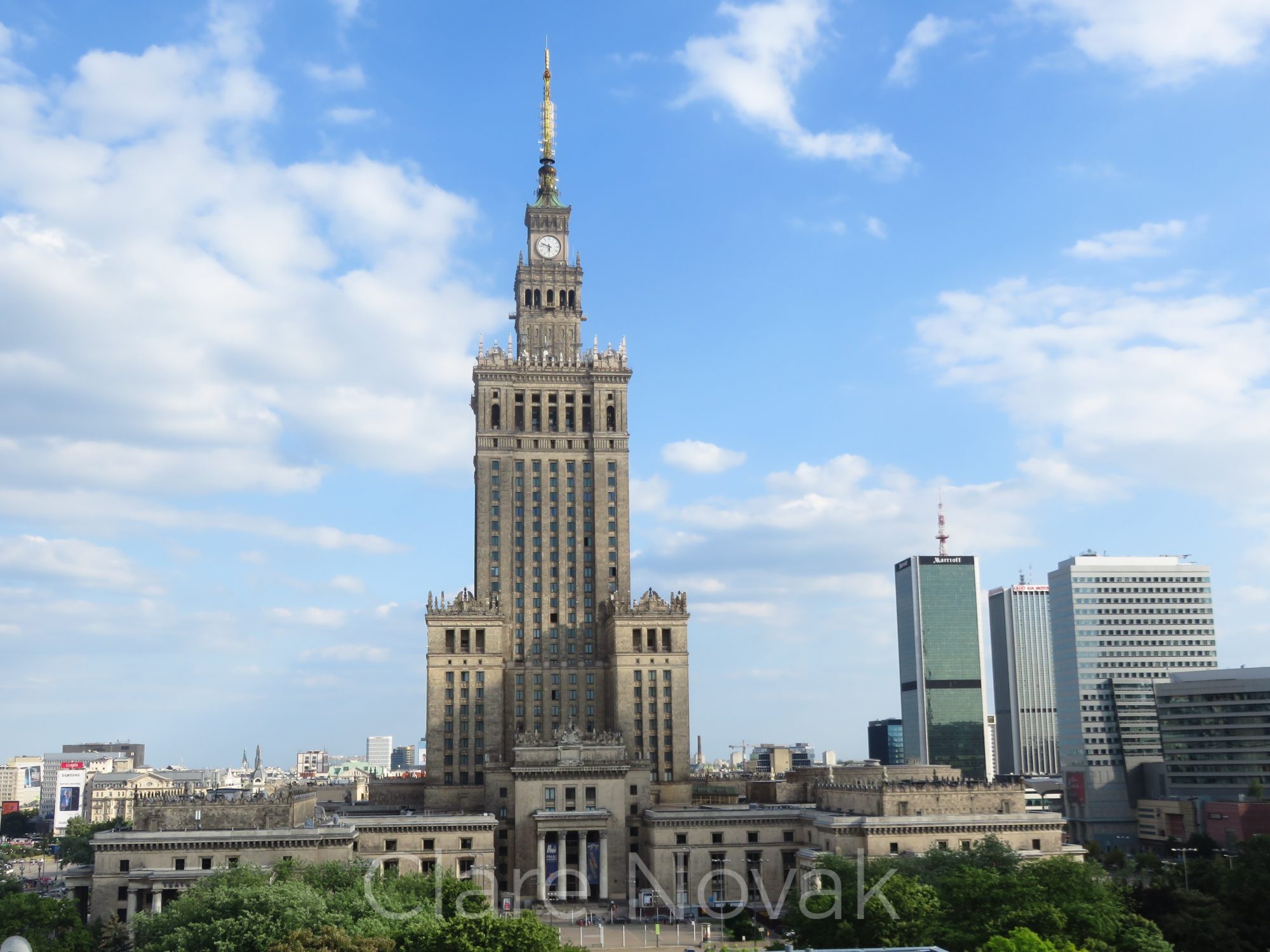 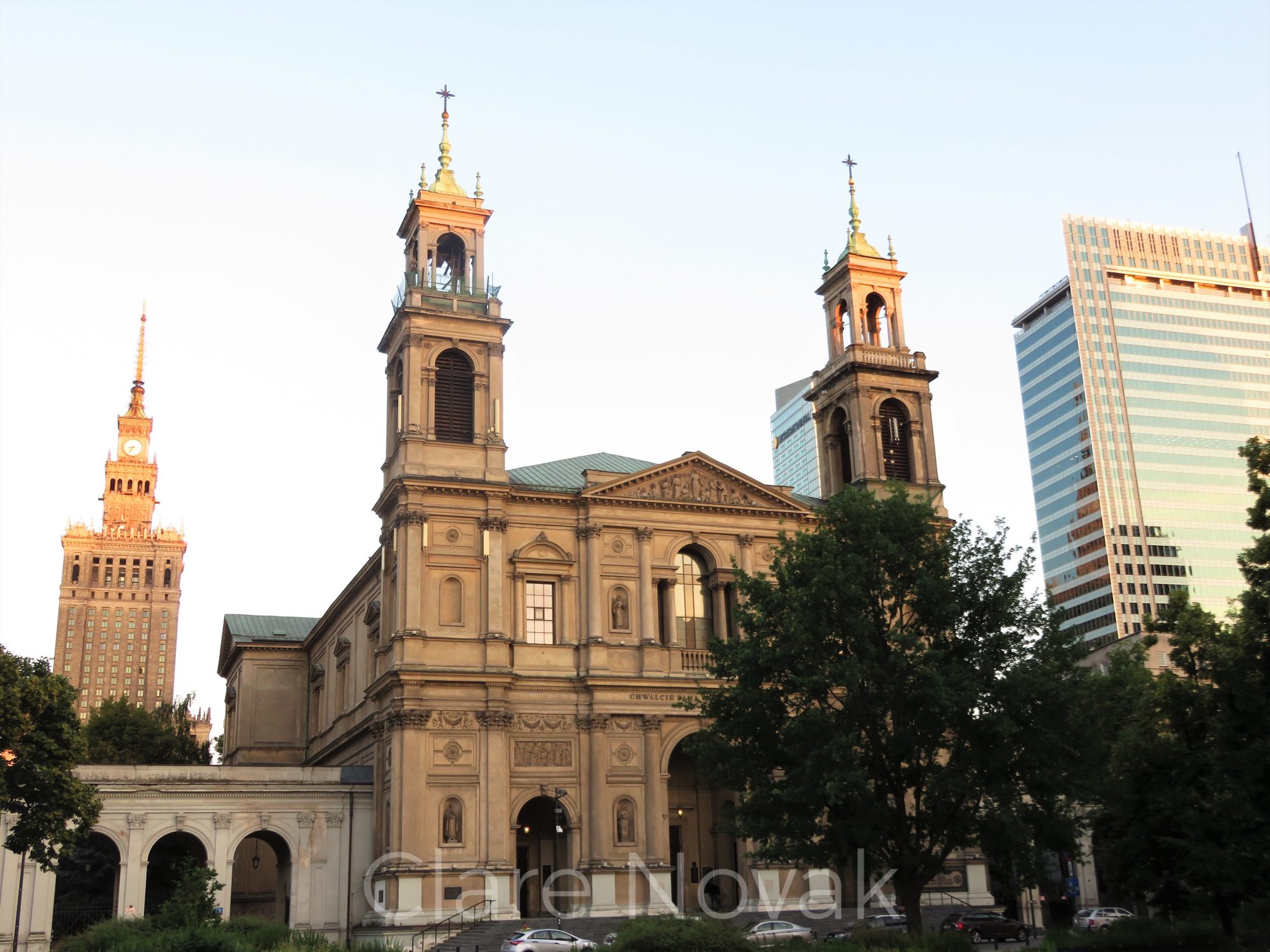 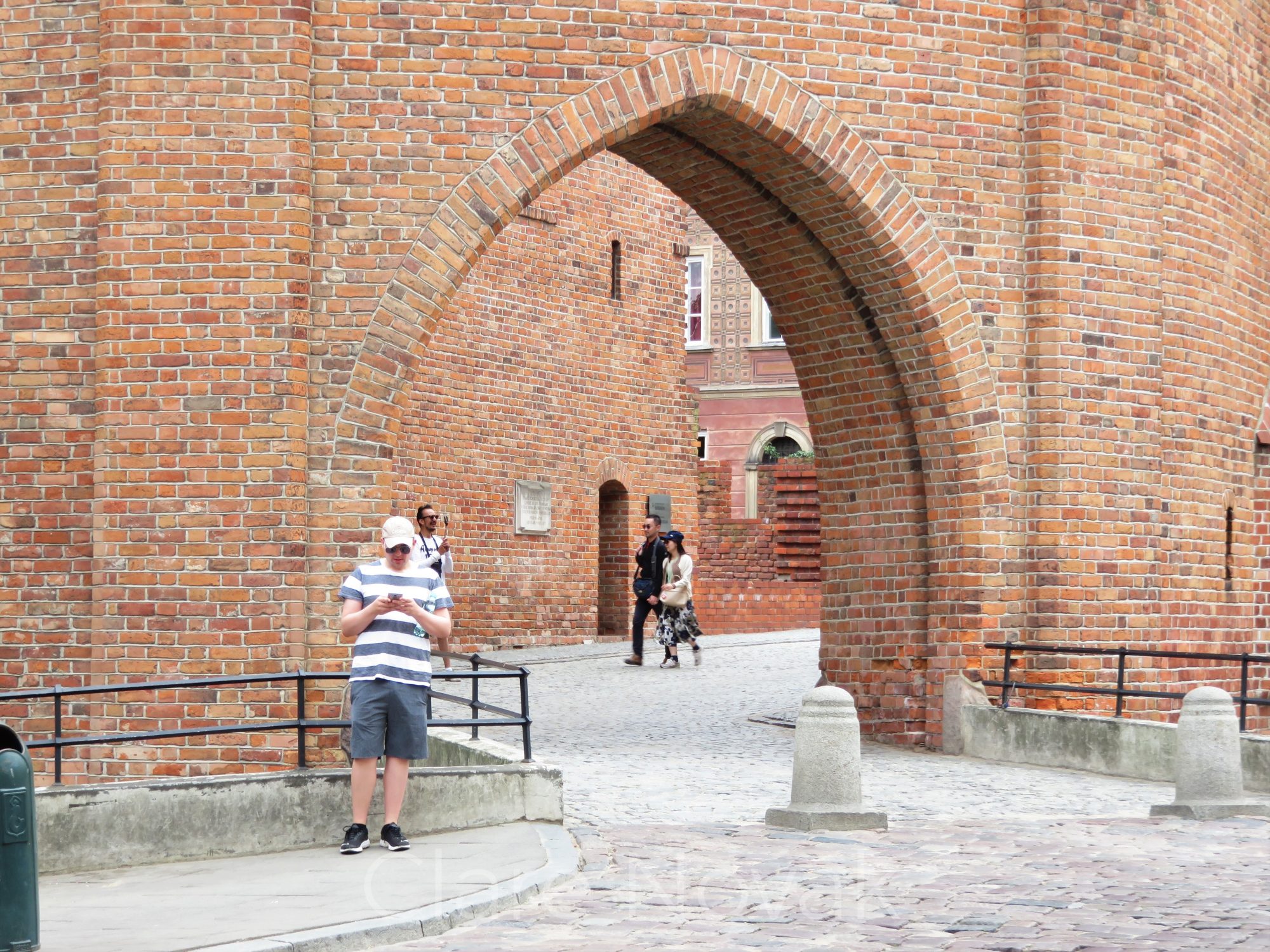 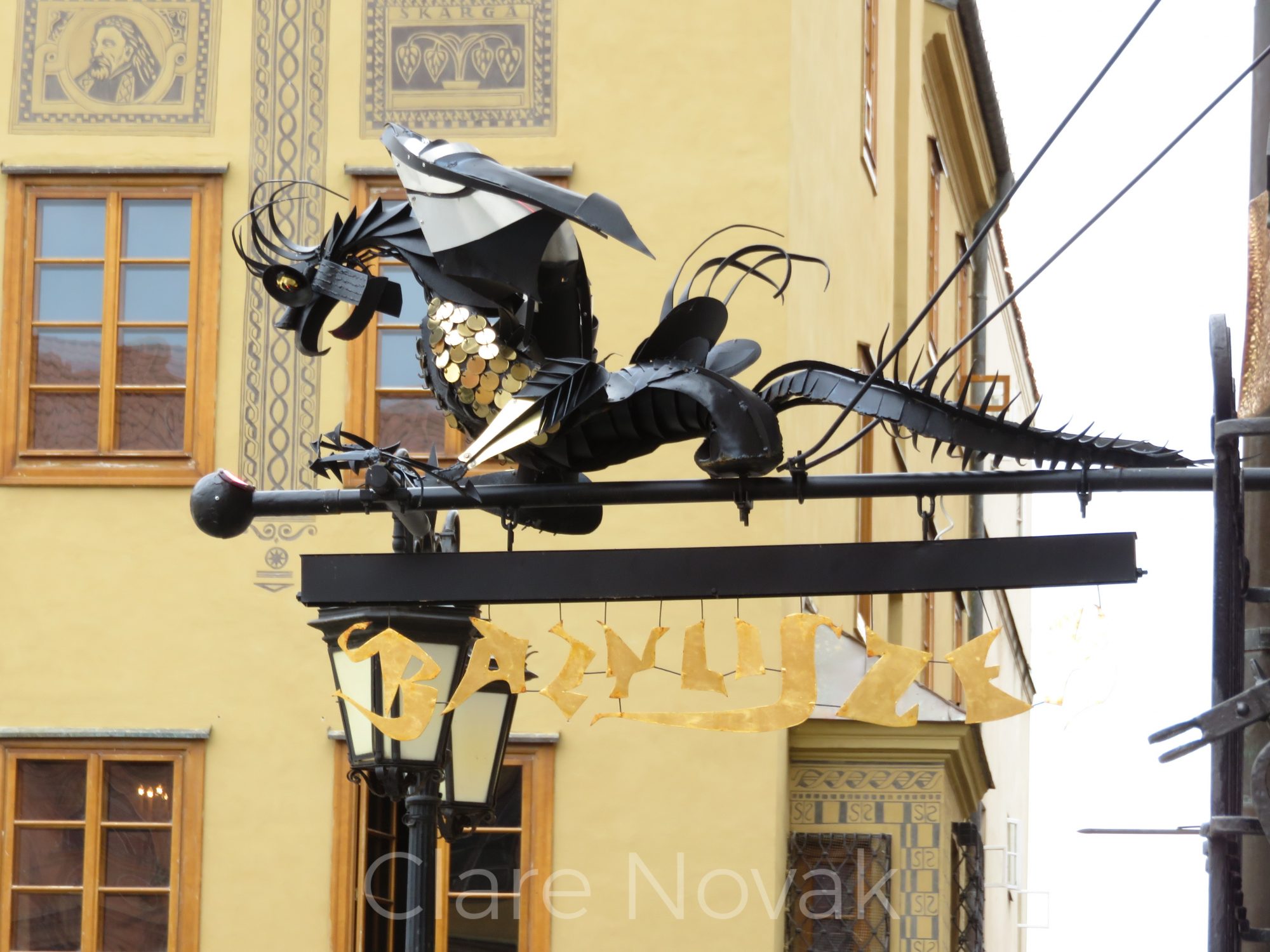 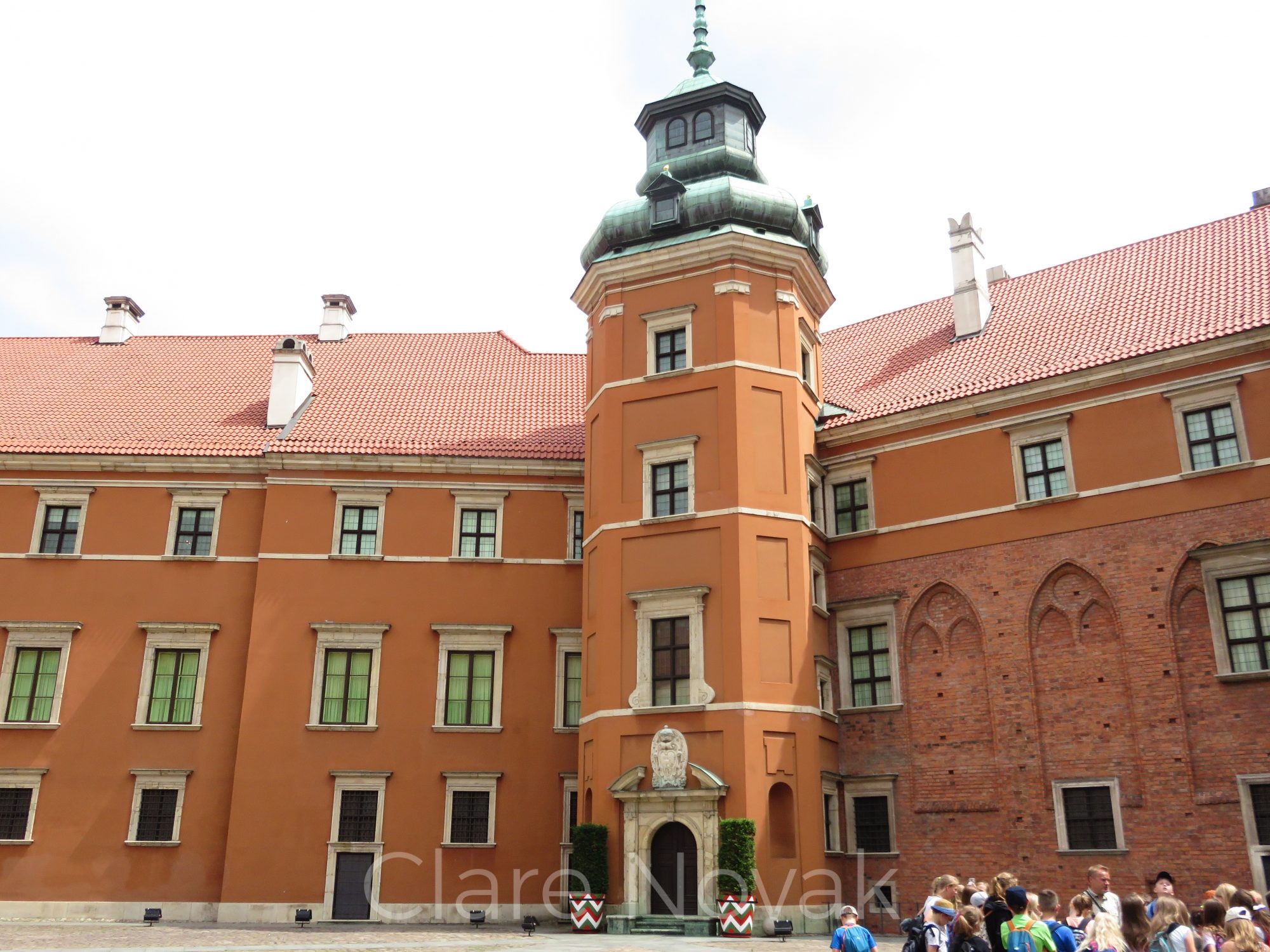 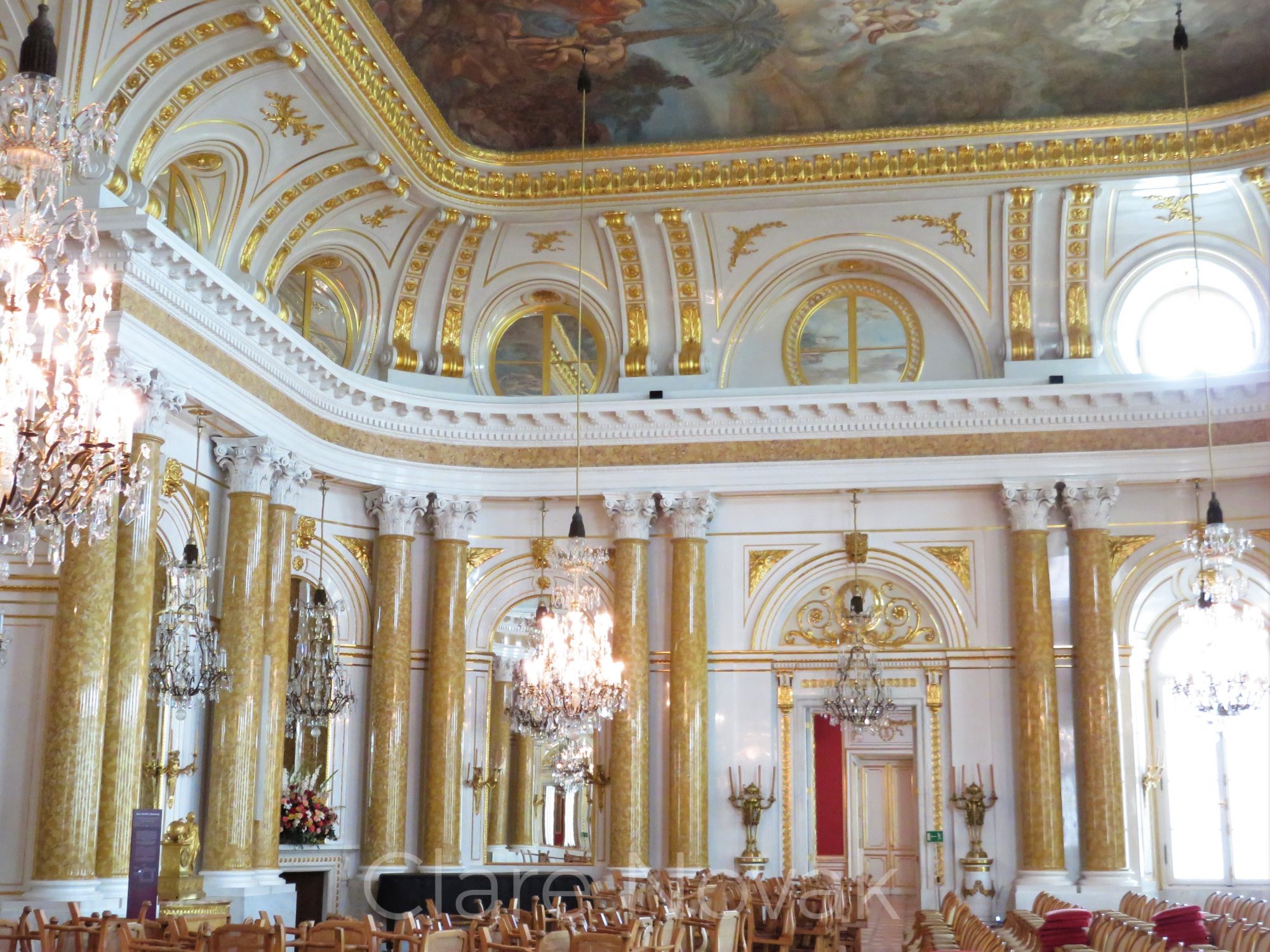 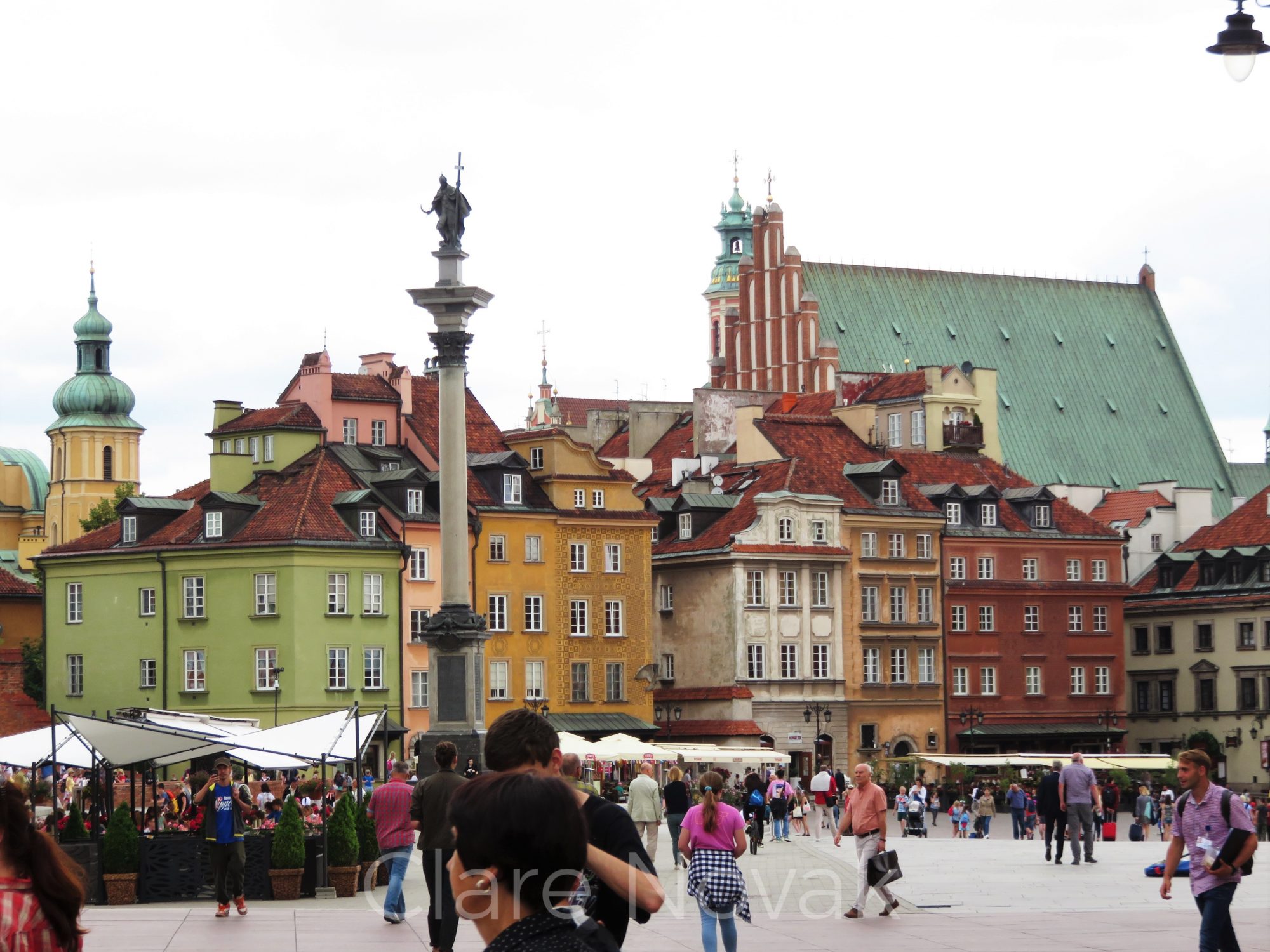 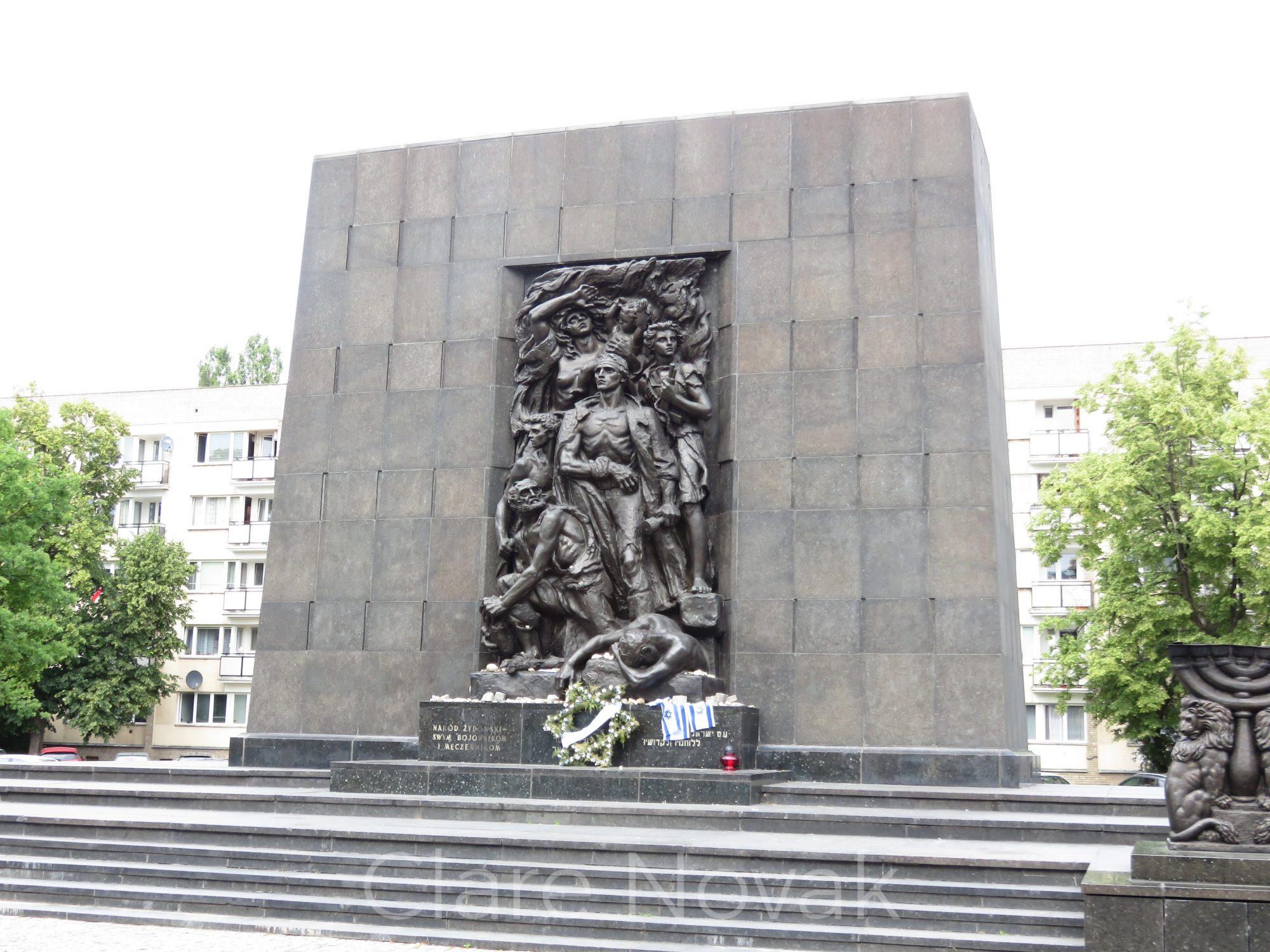 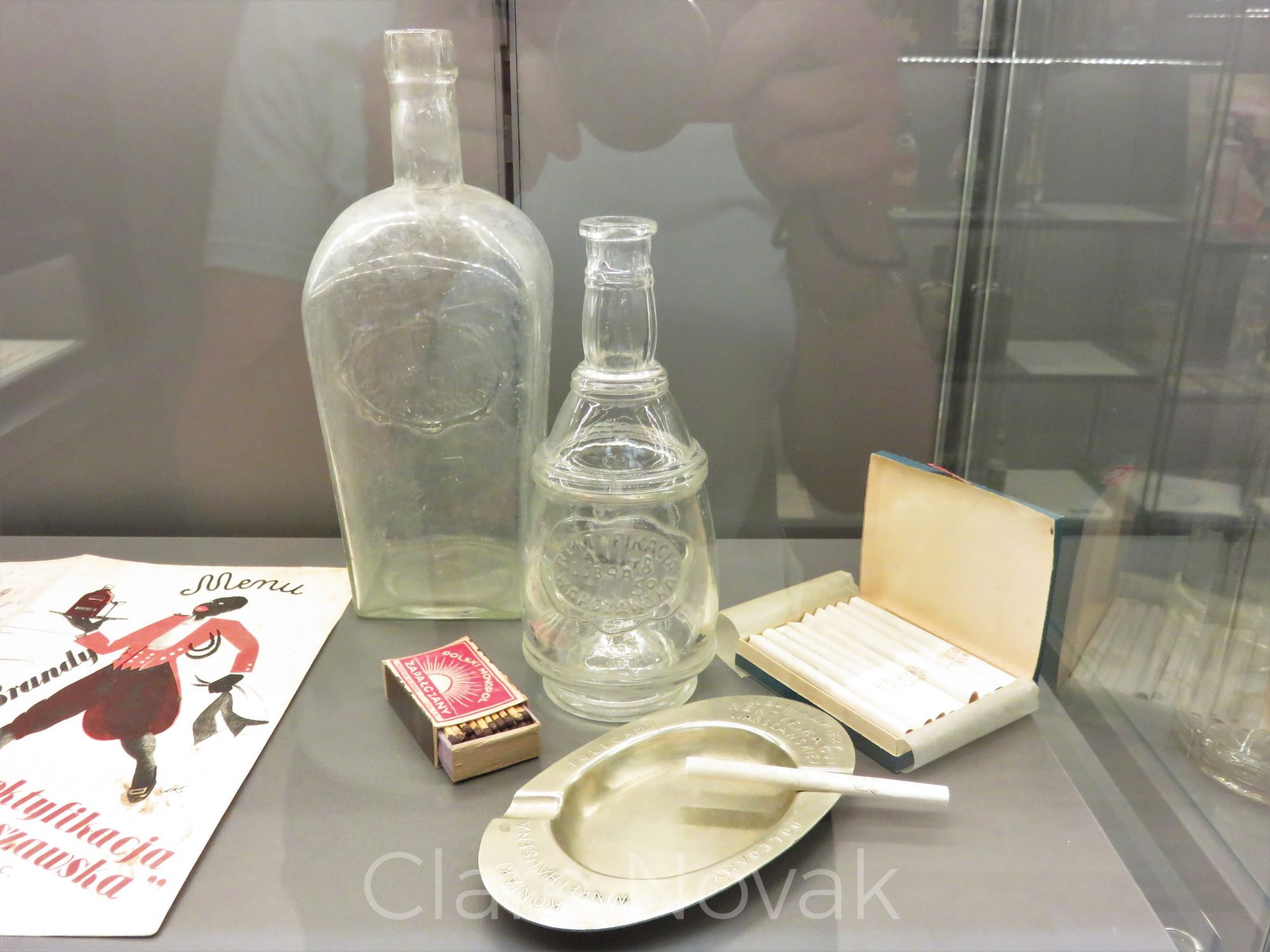 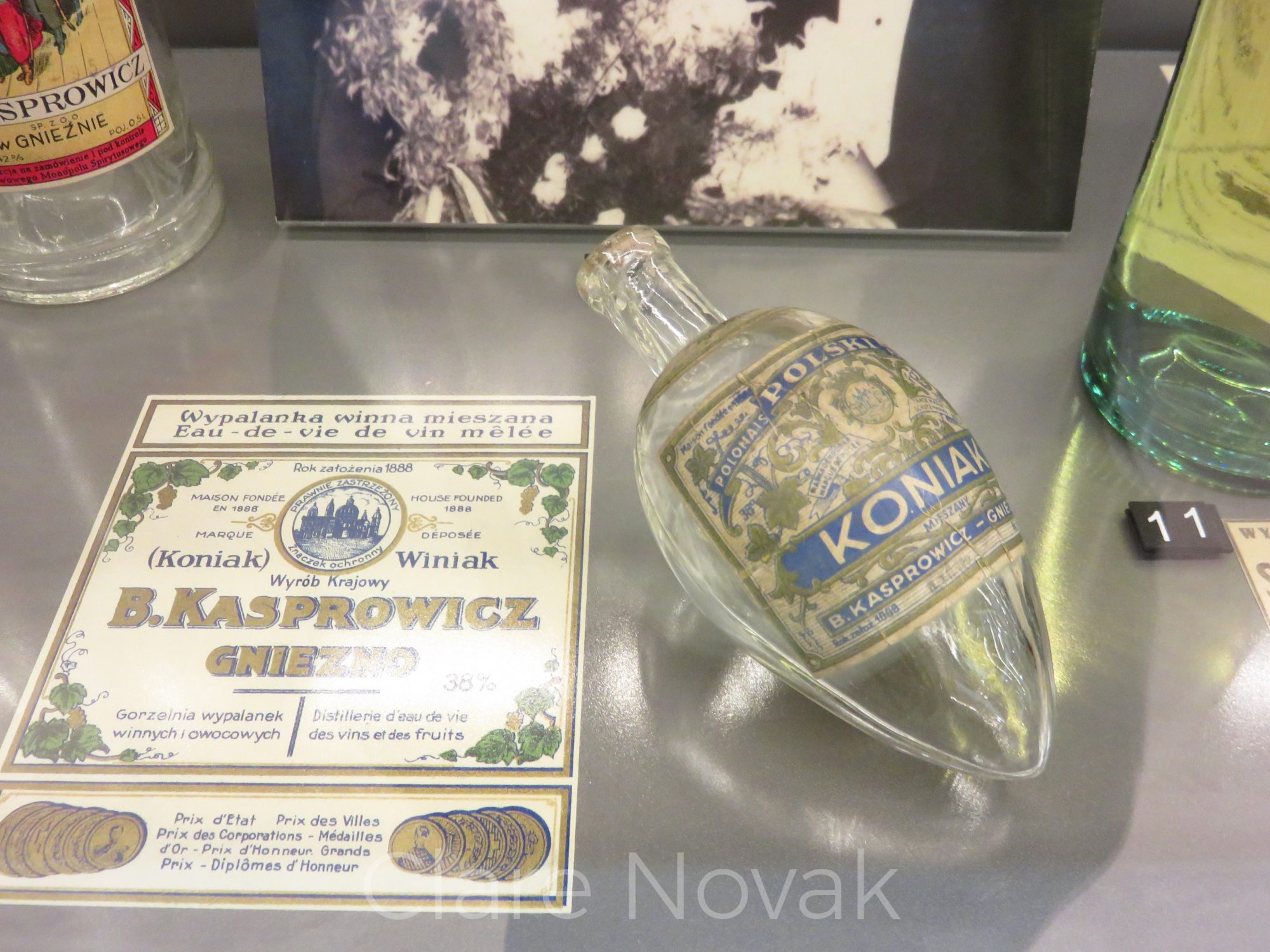 It’s a sign when one of the first things you hear about a city is, “When you come back you should really go to Krakow.” Not the first time I’ve gotten a “What are you doing here?” message on arrival. This was after my initial “Oh, this is not going to work” impression when I walked through the ground floor of the apartment building where I’m staying. Thankfully, first impressions are not last impressions.

J, the agent, was quite friendly and helpful, recommending restaurants and things to do. The efficiency is also clean and serviceable with an 11th floor view—of McDonalds, Coke and Google’s headquarters—ah, like never leaving home.

I set out this evening to find what was still Polish in Poland. The restaurant J recommended most definitely was. The roast duck with sides of red cabbage and potato dumplings so light they nearly defied gravity was perfect. It was accompanied by the nicest evening so far with a dry, cool breeze.

While out walking to find the restaurant, I looked back toward my apartment building, to get my bearings and amused myself by taking a photo, I’ll call the 3C’s—Communism, Catholicism and Capitalism—The Palace of Culture, gift of the Soviet people, All Saint’s Church and Google.

Tsunami or rip current, either way today was a force of nature. In full sun, I bolted awake. How late had I slept? I snatched up my phone and looked—4:42, Whaaaa? Ok that can’t be right. Checked the computer, likewise 4:42—was the internet down? Then I looked across as the analog clock on the Palace of Culture, 4:42. North, I’m north and Poland obviously does not go on daylight savings time. Since the boulangerie does not open until 7, I pulled on my eye shades and tucked back in.

At the more civilized hour of 7, Charlotte’s Menorah opened and I gave myself permission to tuck into a basket of homemade breads, butter, raspberry jam and a cup of coffee. Sigh, warm bread and butter for breakfast, yum.

Decided to go to Old Town to see how they’d reconstructed the area, as it was demolished during WW II. It was pleasant enough to walk around and I stepped in and out of the various churches, one of which was having an organ concert at 2. It being only 11, I went to the palace museum to find an eclectic collection of restored rooms, borrowed furniture and portraiture, a fascinating collection of playing cards ranging from a deck with soft core Asian porn to a deck with Churchill as the Joker. The stars of the museum show were two Rembrandt portraits.

Being hungry, I wandered into a side street and a 30 seat perogy house. The beer was better than Slovakia and the perogies every bit as good. Unable to decide on a single type, I went with the variety plate, nirvana smothered in butter. Finishing at five before two, I walked across the street to hear the pipe organ concert, which was impressive. I can only believe that Paderewski, lying in his crypt, one floor below, was pleased with the music.

From there, I walked over to the Polin museum of 1000 years of Jewish history in Poland on a site where the Jewish Ghetto stood during WW II. Yes, it is every bit as intense as it sounds. Reading a thousand years of history in three hours and moving through the emotions from the best of times when Poland was a place of peace to the worst of times too horrific to do anything but cry through slowed and drained step by step and hour by hour. The current times are not enough better to restore the energy to the site. There was a visible difference between people entering and people leaving.

That accomplished, it seemed only right to balance out my energy by a trip to the vodka museum. Did I want the ticket with samples included? Yes, please. Did I want my first sample before seeing the exhibit? Yes, please. There I tasted Chopin Vodka, especially created for the museum and distilled from potatoes. How was it? Good. Really good. The exhibits were old bottles, advertisements, traveling sets and glassware. My personal favorite bottles were those made under the Polish government office whose name when spelled out had the initials PMS. See, vodka IS medicinal….

My other two official shots were Buffalo Grass vodka, hard to describe with a hint of cinnamon and nutmeg in the taste and the scent of wild grasses—thumbs up and a hazelnut vodka, also thumbs up. The docent and I got talking and I guess she decided I was good company and gave me a shot of the Russian vodka gratis. It was the least interesting of the lot.

The apartment concierge recommended visiting Hala Koszyki as it is one of the few remaining old markets. Given that endorsement…

The weather here has been uniformly lovely, with highs in the mid-70’s. Friday was no exception. Arriving at Wilanow was…

One simply must love a city with not one but two Vodka Museums. Of course, with sunset at 3:30 PM,…