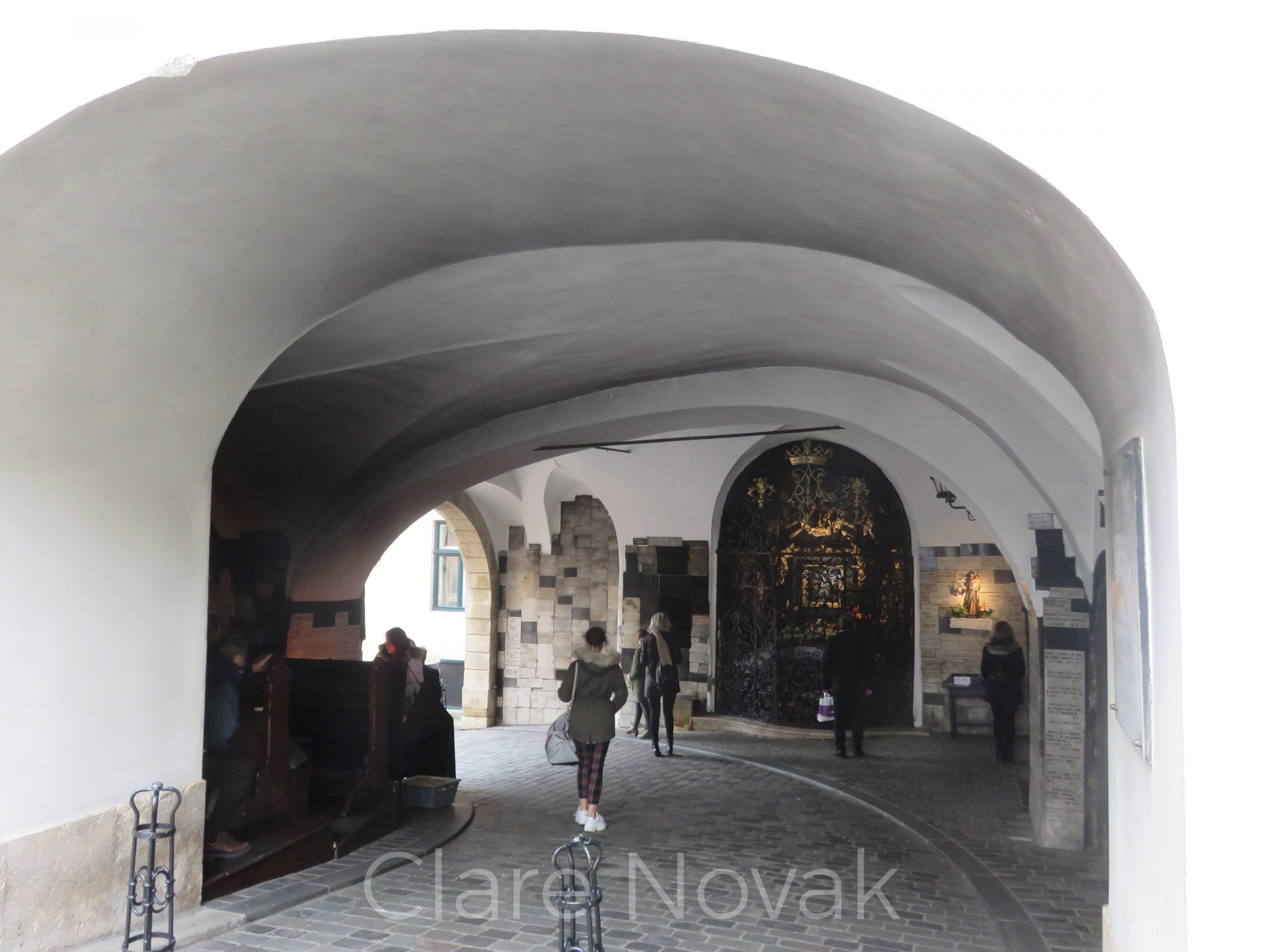 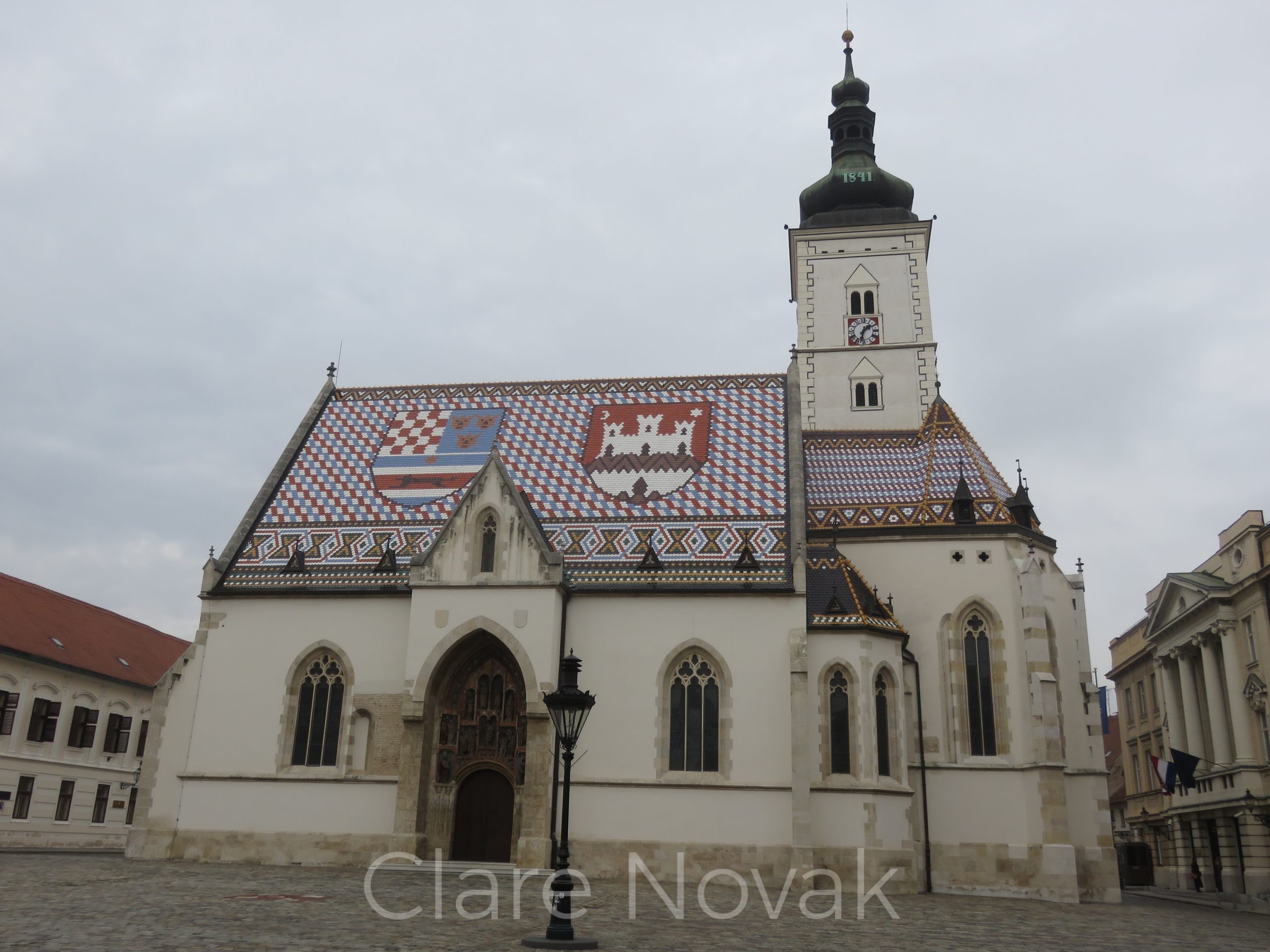 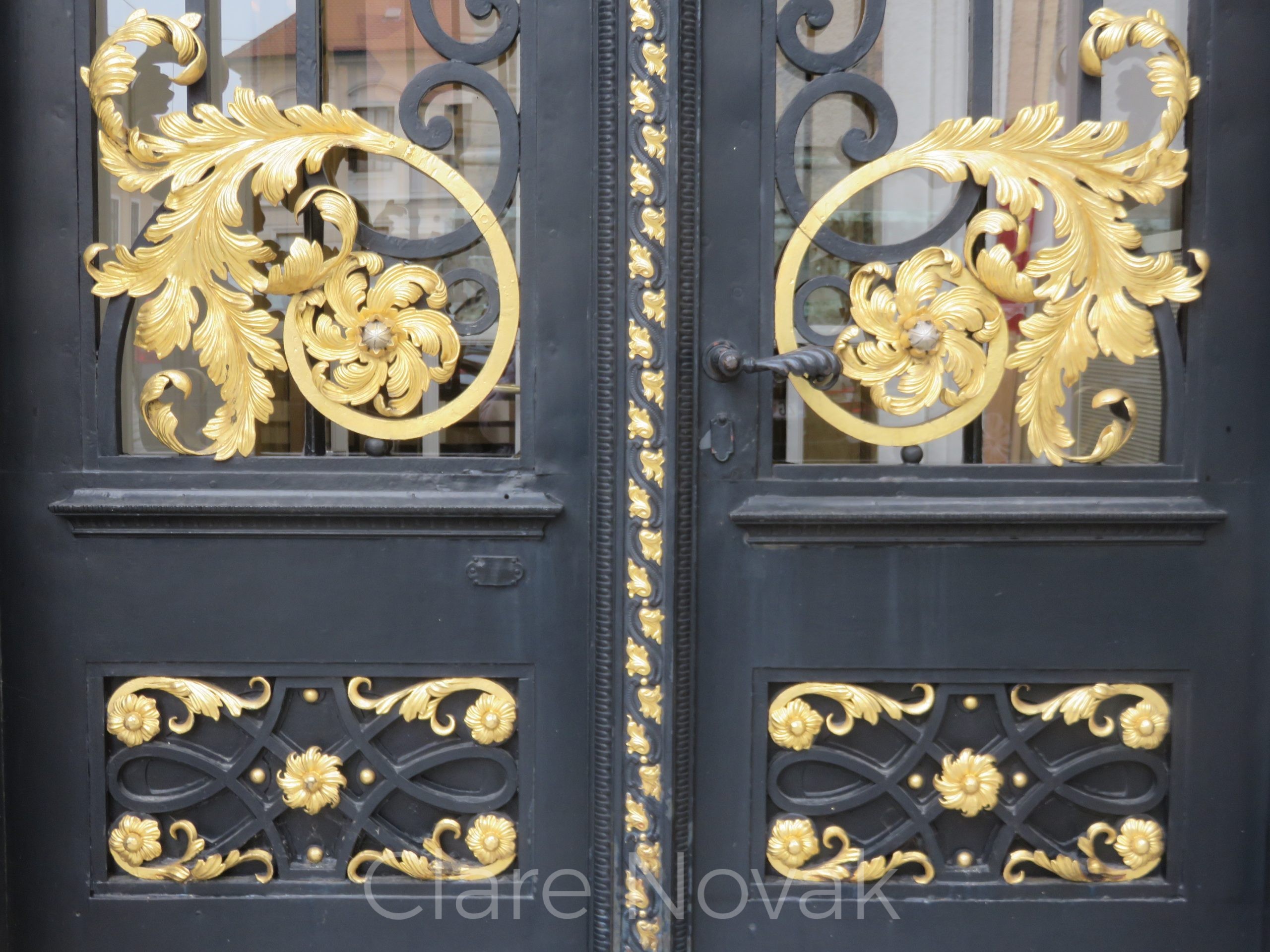 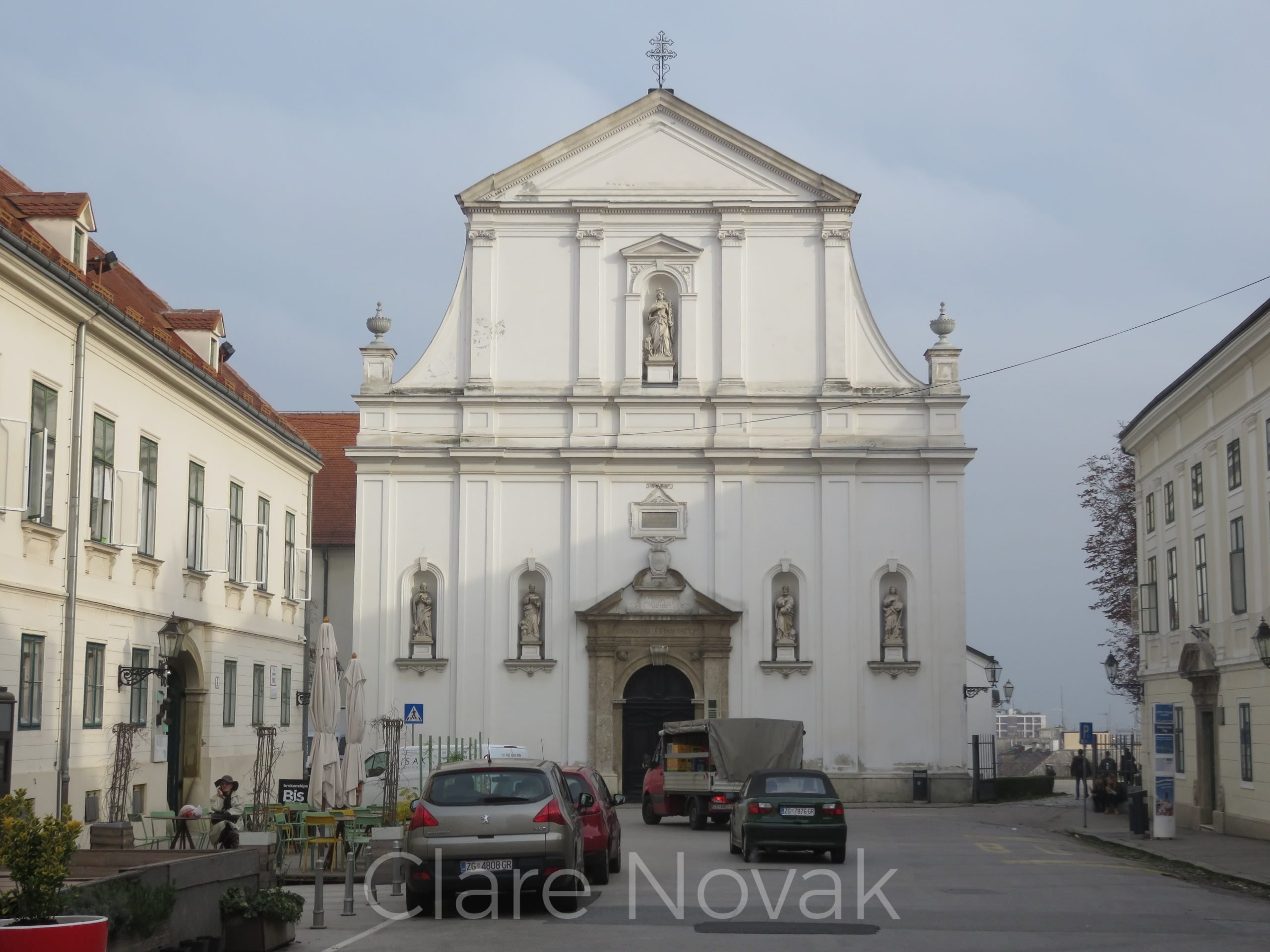 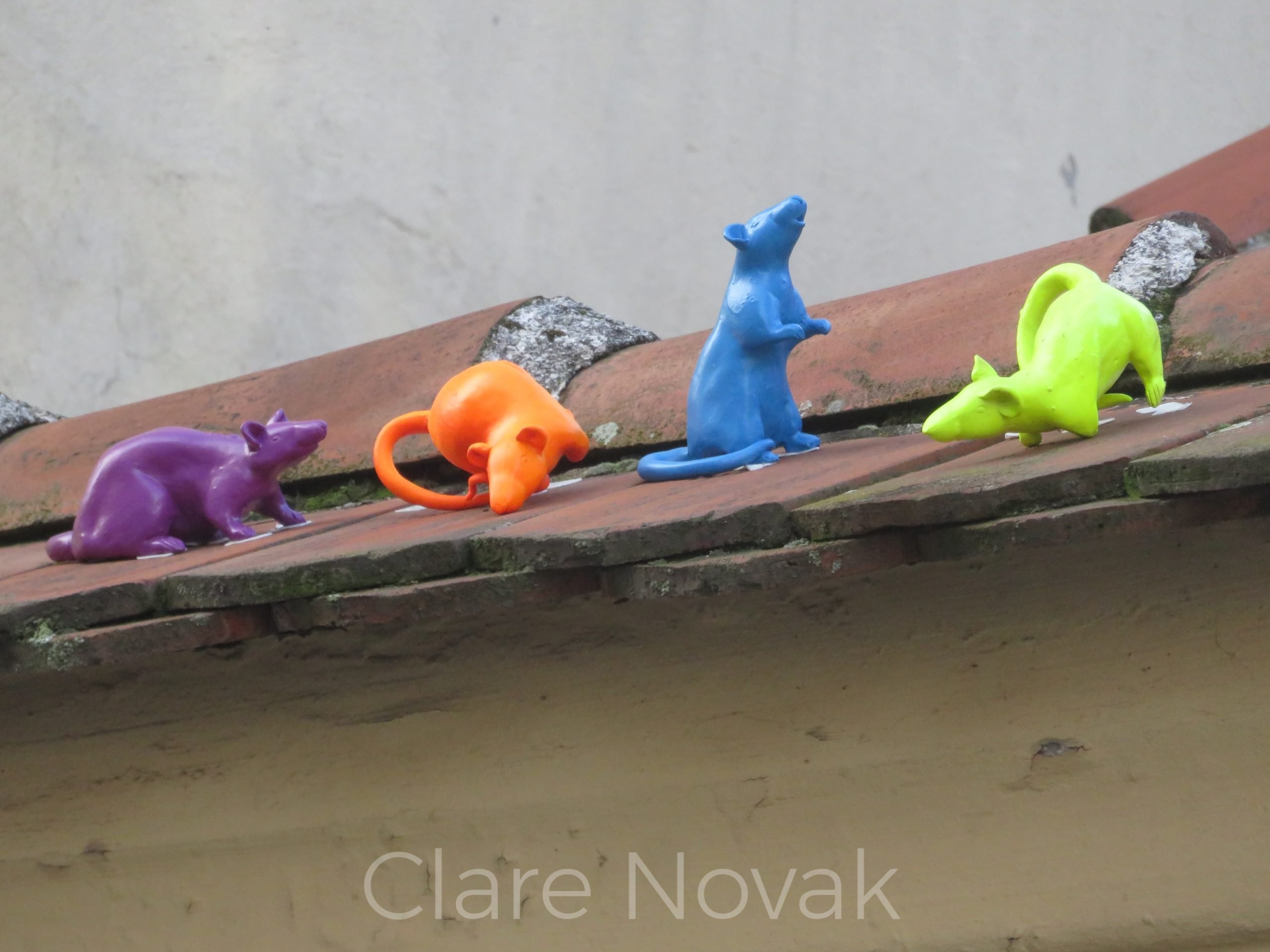 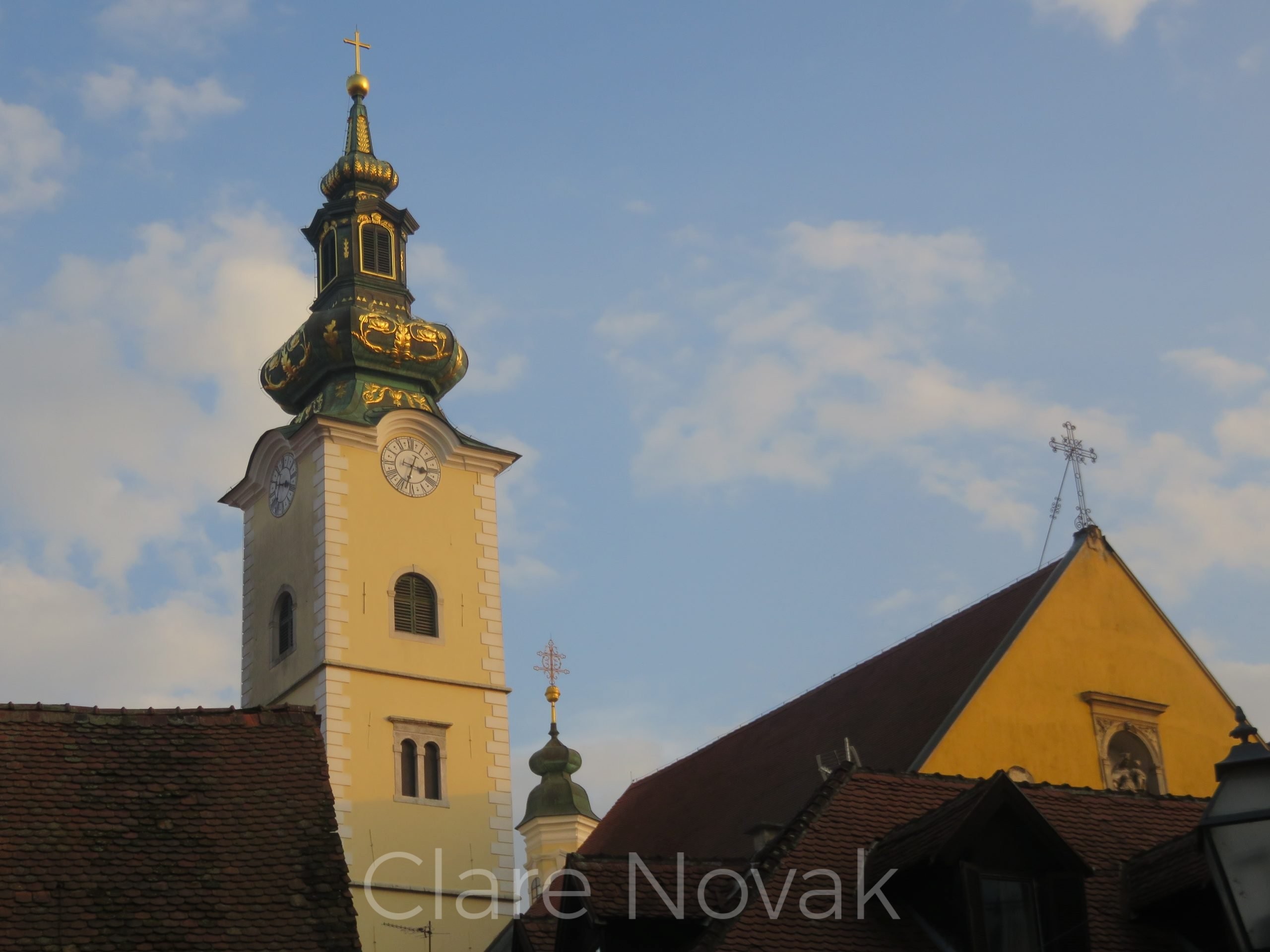 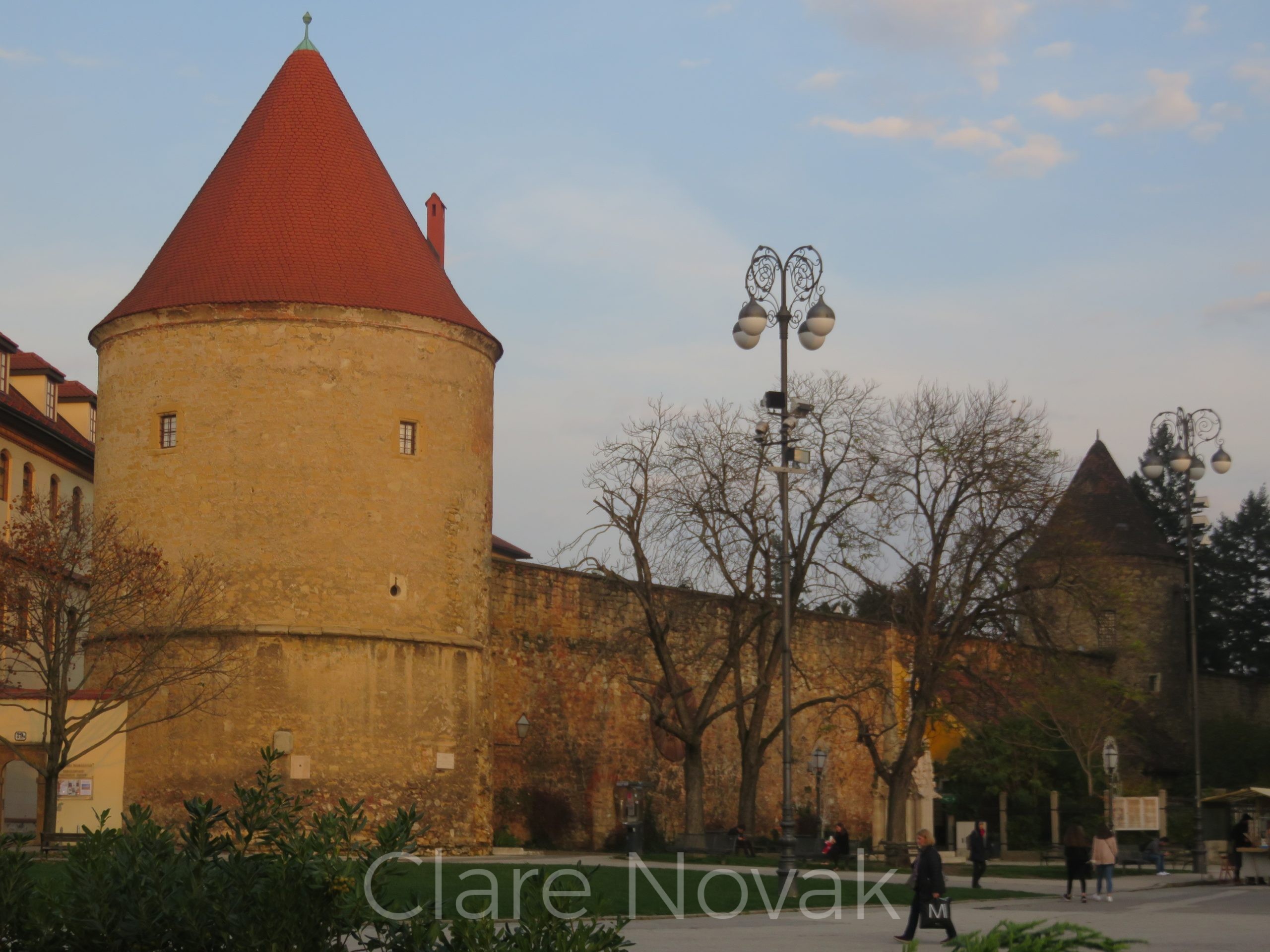 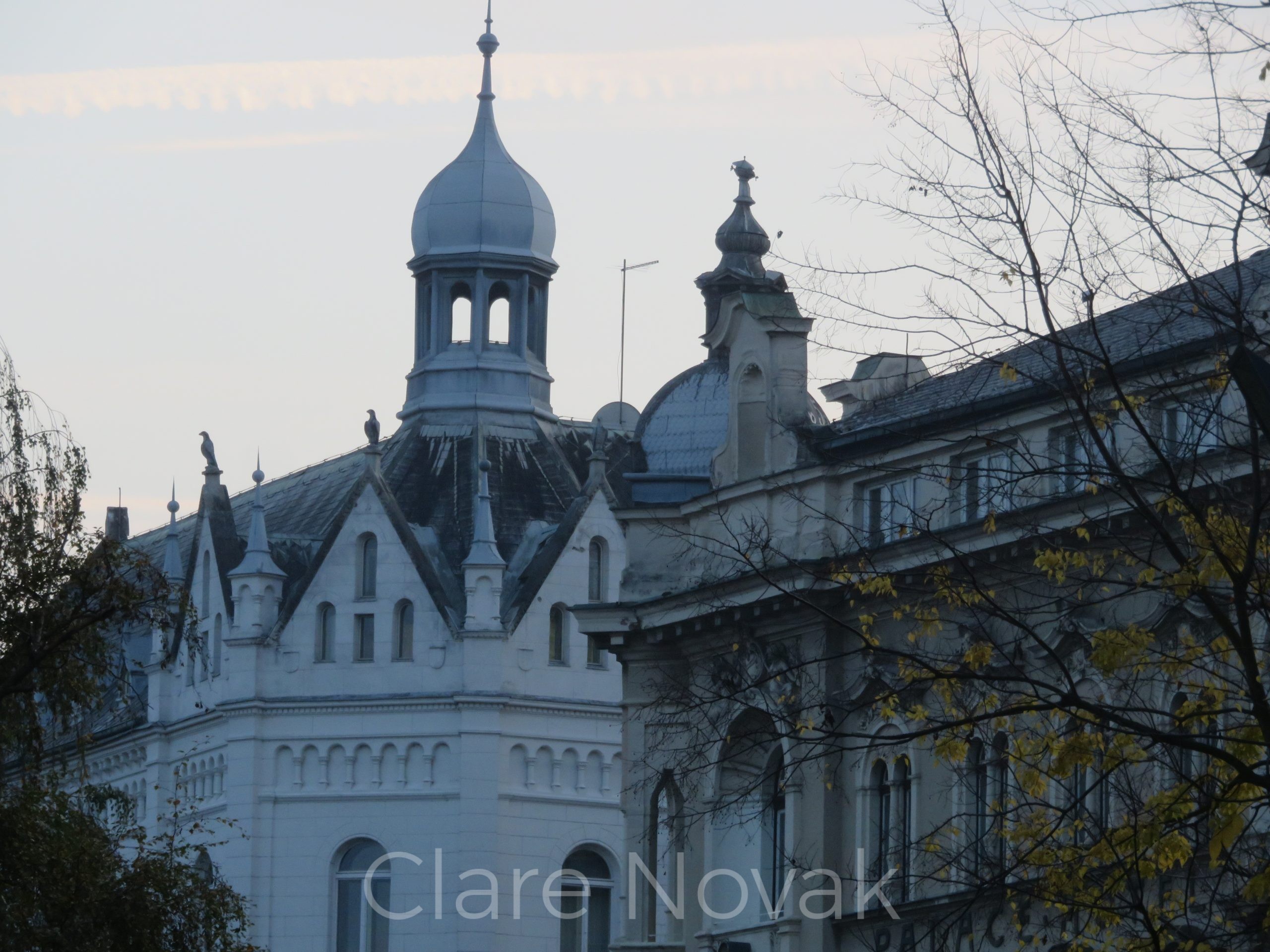 It was a pleasure to walk in the crisp air and be part of the evening crowd. There is not far to go nor a thousand sites to see. It is just enough, with the cathedral, the square and the night market of only three short rows, that were perfectly enough. Meandering up hill, for photos of the cathedral, I almost wished for a soft snow. It was that sort of night. The sort that quiets with snow floating down and lightly frosting the ground.

Of the three rows in the market, one had hot, mulled wine, another a delicious cheese pastry. I was tempted to buy a nut roll that resembled my Baba’s but knew I couldn’t get it back into the states, being hand wrapped. Regretfully, I also left the unwrapped slabs of smoked bacon for other’s enjoyment.

Heading back toward the hotel, I stood in a park near the square and contemplated the tourist signs. The museum choices for tomorrow were:

Friday afternoon afforded more meandering time and nothing decided except for where to have lunch and dinner. Heritage restaurant gave a whole new meaning to hole-in-a-wall. There were four barstools along a counter, two by a desk and two tables for two, outside. That mattered not as the locally sourced food and wine was exquisite. It’s the only place I’ve ever been where a half a sandwich is a gourmet meal. Inside the rye bread was prosciutto, mountain cheese, black truffles and arugula. Hungry as I was, the nearer to the end of the sandwich, the slower I ate in an attempt to prolong the experience. I would come back to Zagreb just to eat there again.

On a happy food high, I set out up hill to old town. It was, of course, small and charming. The Museum of Naïve Art was tiny but I truly loved the art. There was happiness in it, simplicity and heart. Walking toward the old city ramparts, I noticed the Museum of Broken Relationships. As my Croatian colleague is fond of saying, “What the hell.” Indeed, it was an experience that makes you say, “Hm, interesting.”

The stories and objects are well chosen, representing all manner of relationships—kids losing a parent through divorce or death, separations by war, disease and accident. The romantic relationships were stories of hope, survival, finding oneself again and missed connections. Most poignant was a woman who inherited her Great Aunt’s things to find that the aunt had been an artist of great promise who stopped when she married. One of the sketches is displayed and it’s a shame that the world lost such a talent.

There are small portions of the old city ramparts. Ivy turning fall colors, with a bit of watery sunlight made the walls a work of art. Zagreb has about it an air of vibrancy and growth. It is appealing to see a lively restaurant scene live side by side with older neighborhoods and small, graceful single-family homes still in the city proper. I look forward to returning.

Head down and facing into a gale, peppered with freezing rain, hands balled up and shoved down in jacket pockets,…

Germany needs a better PR person, especially regarding chocolate. Germany is far and away the largest producer of chocolate in…