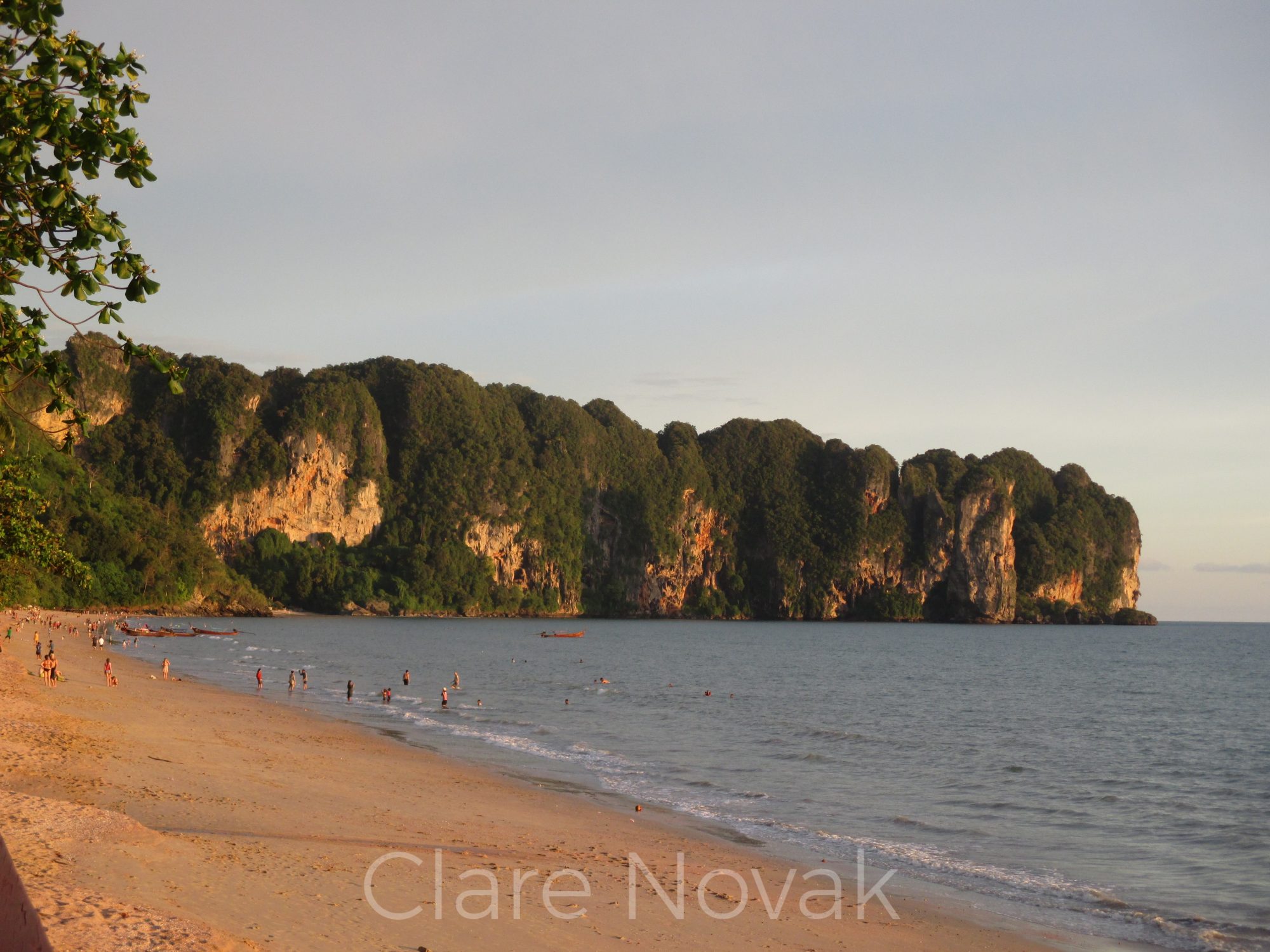 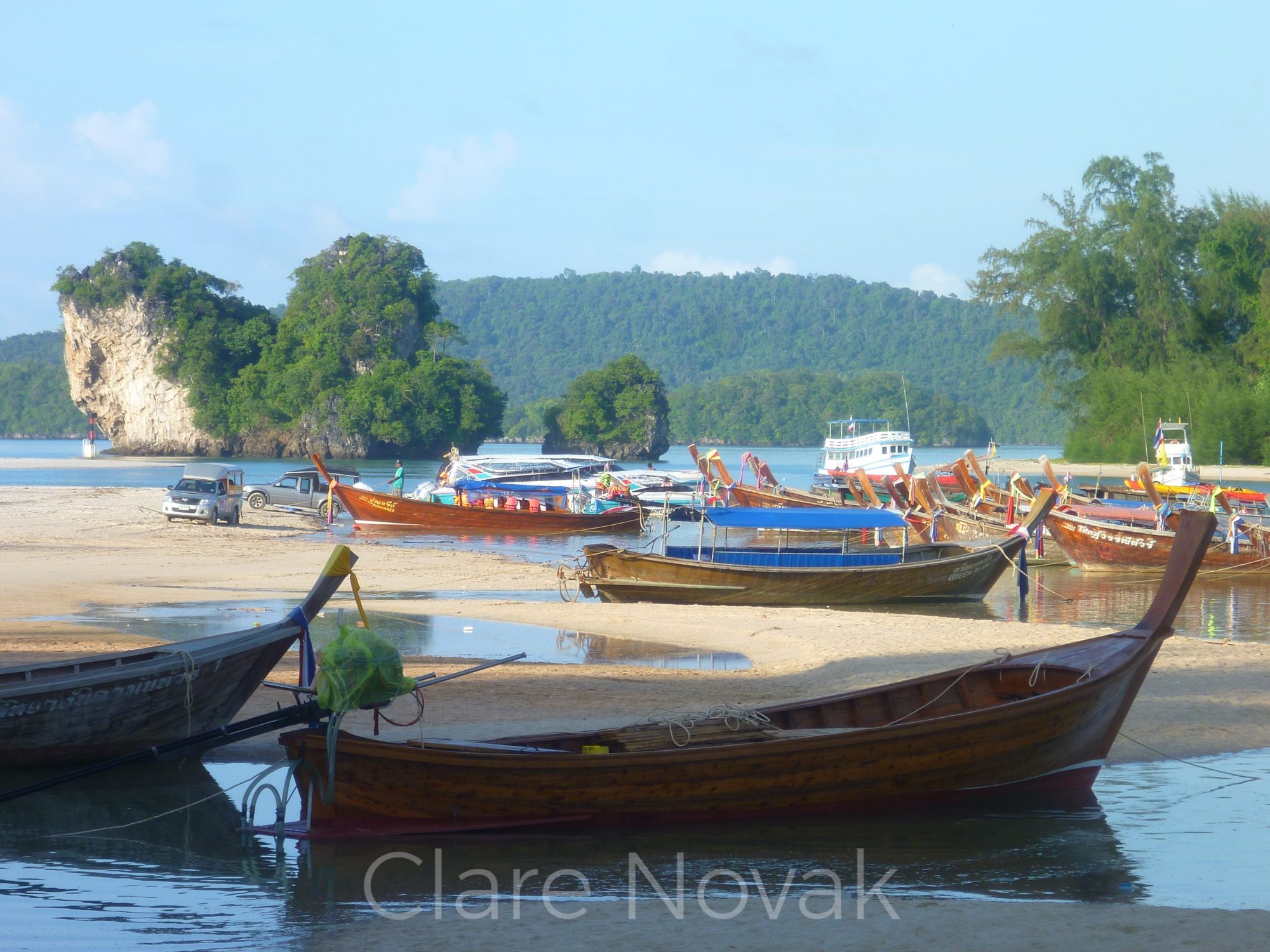 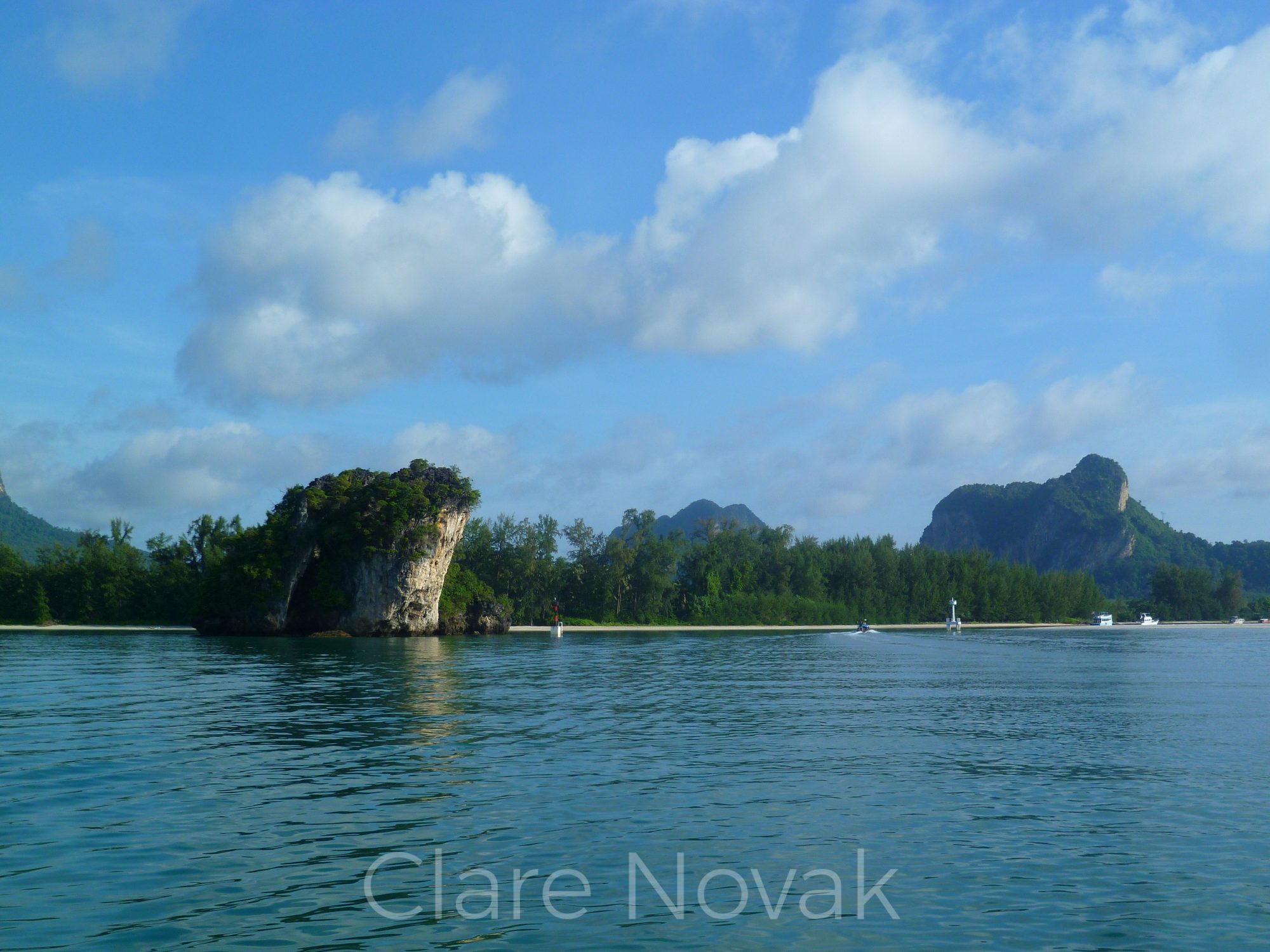 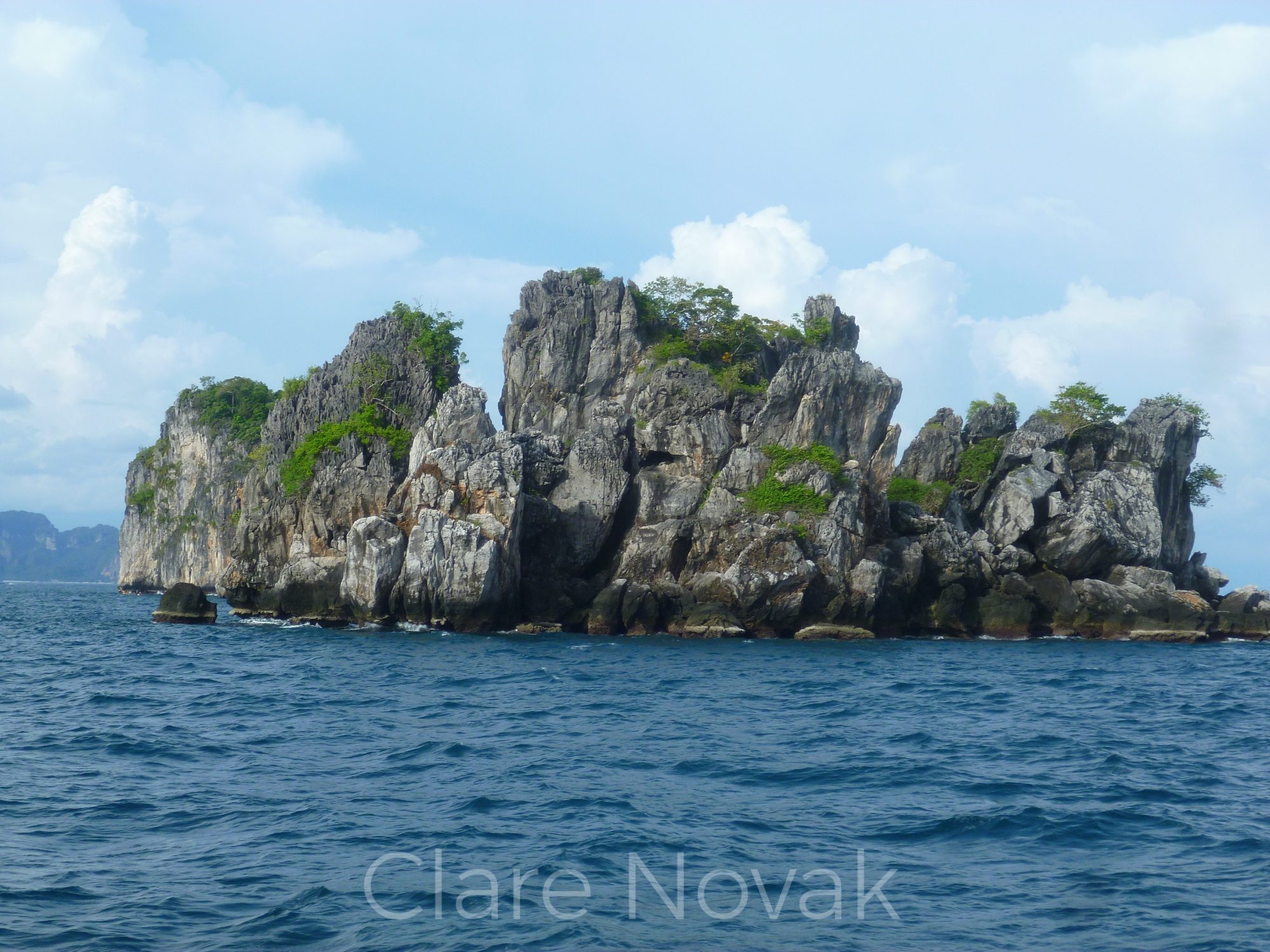 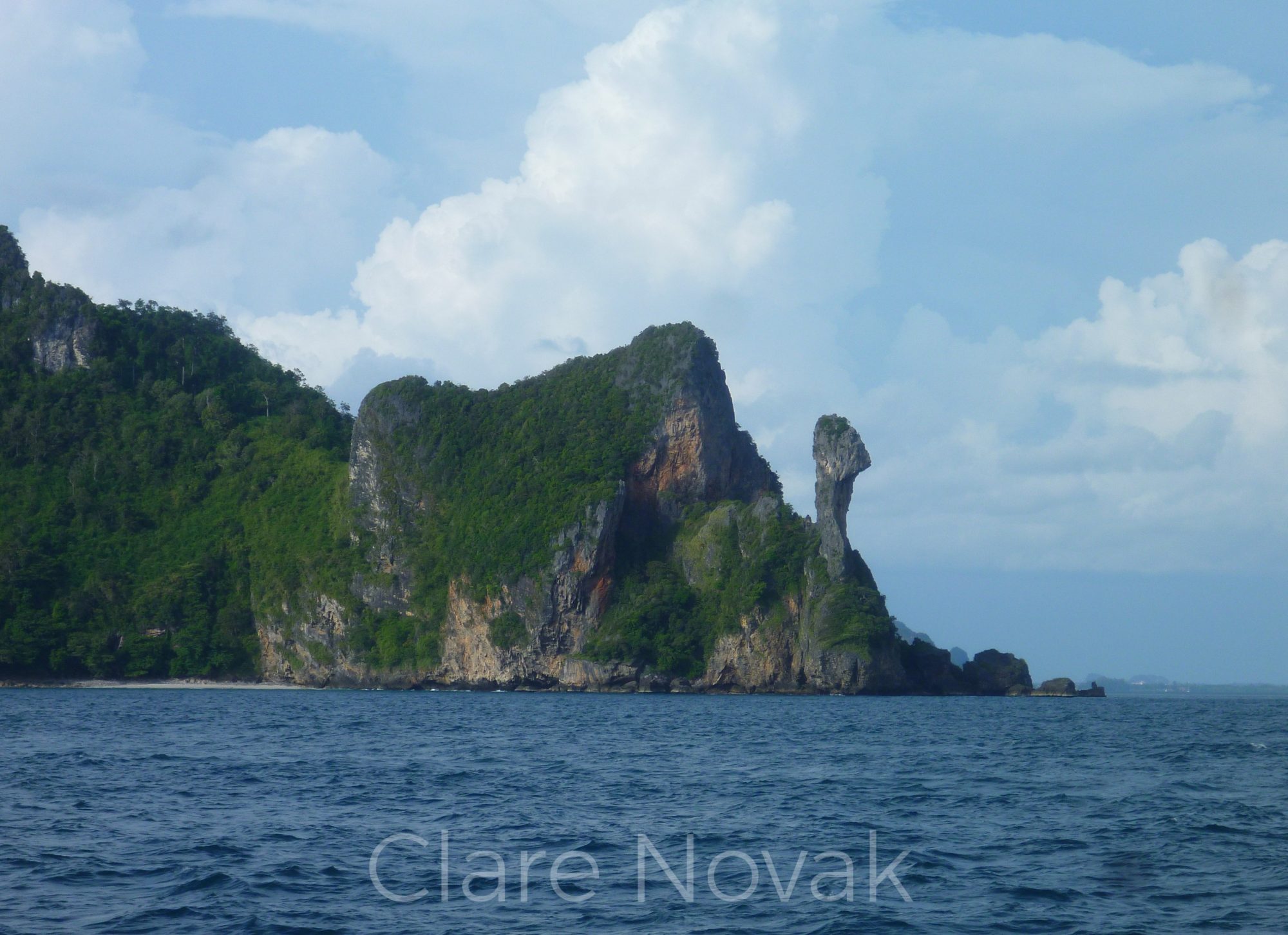 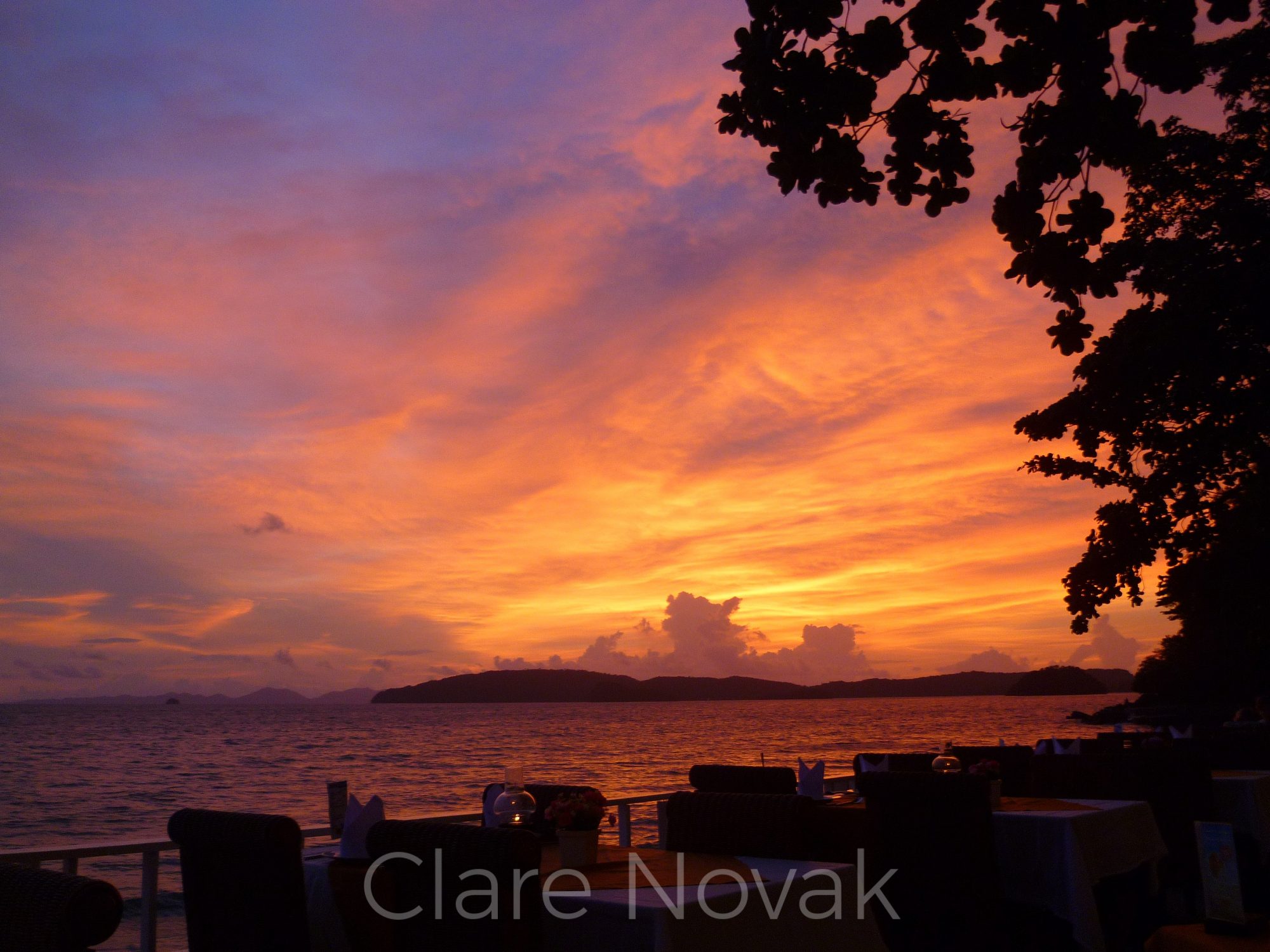 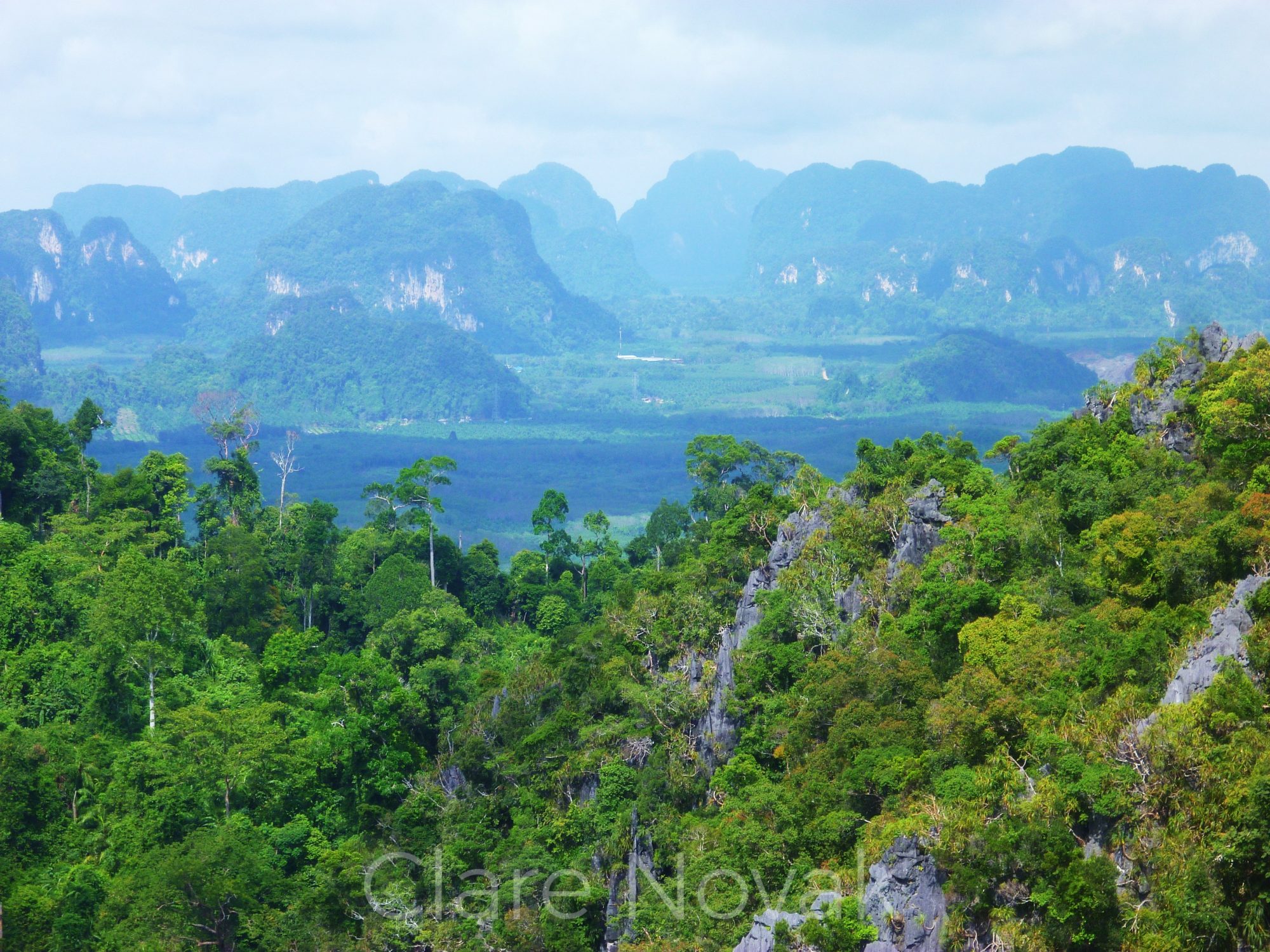 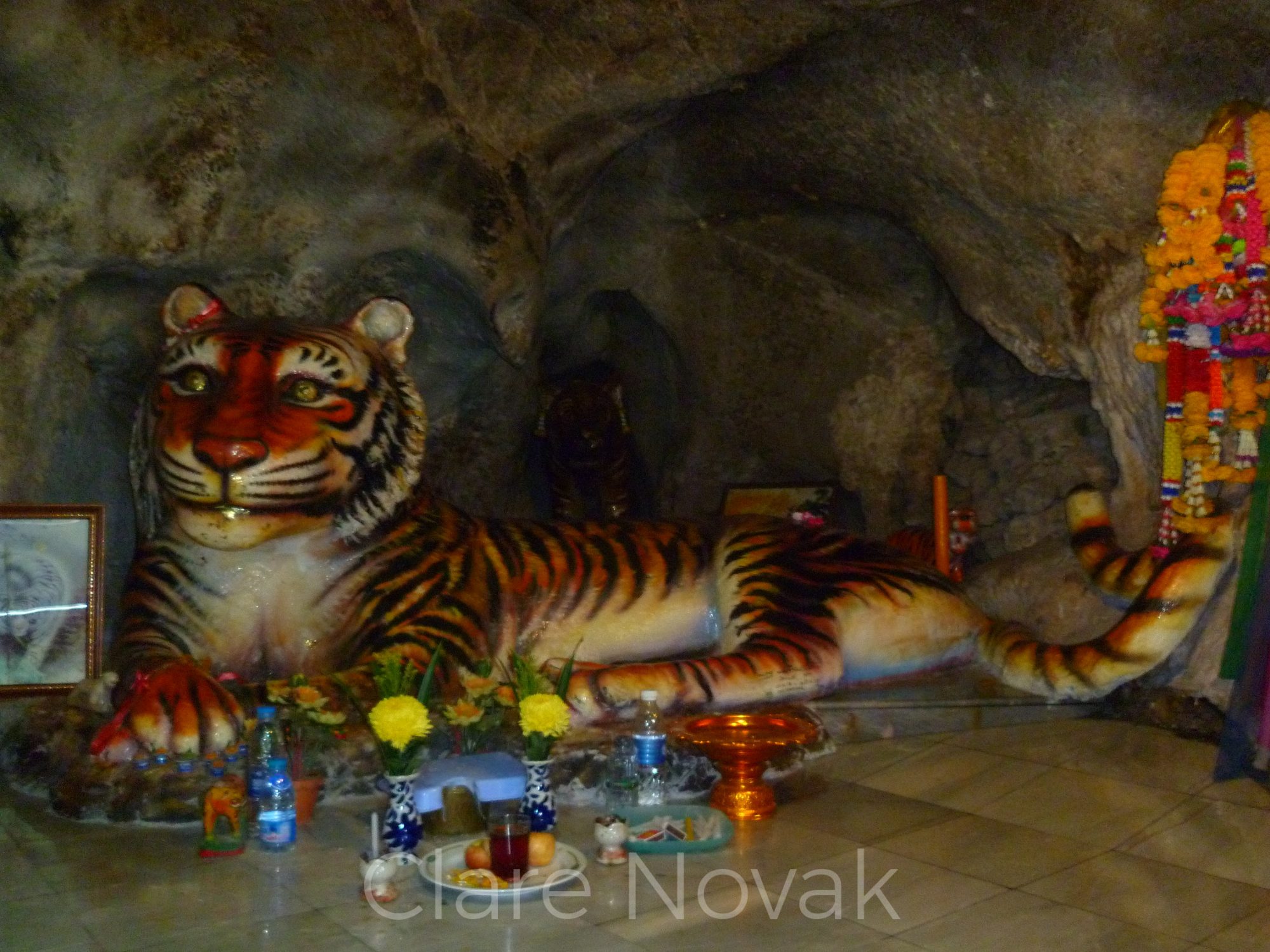 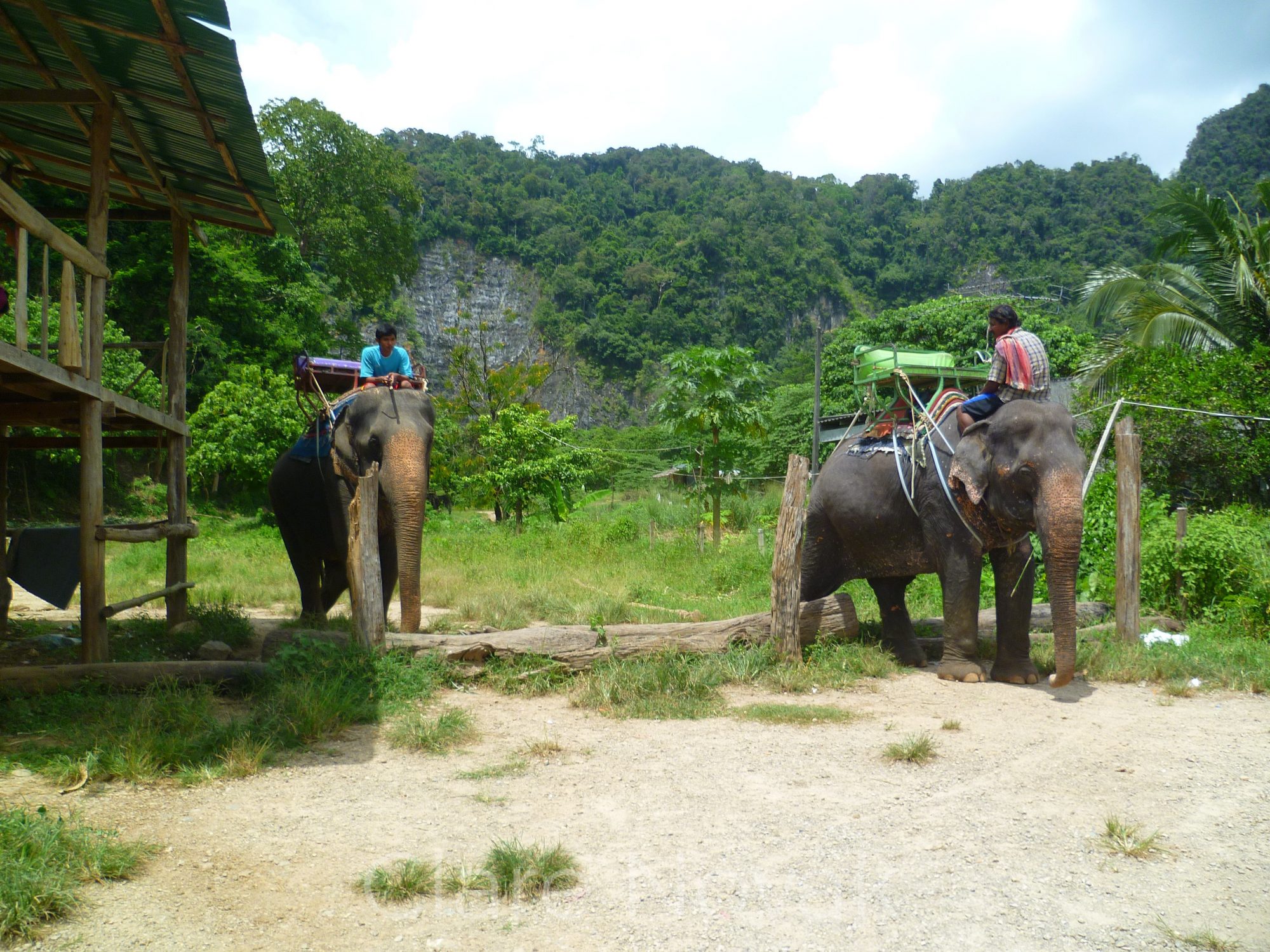 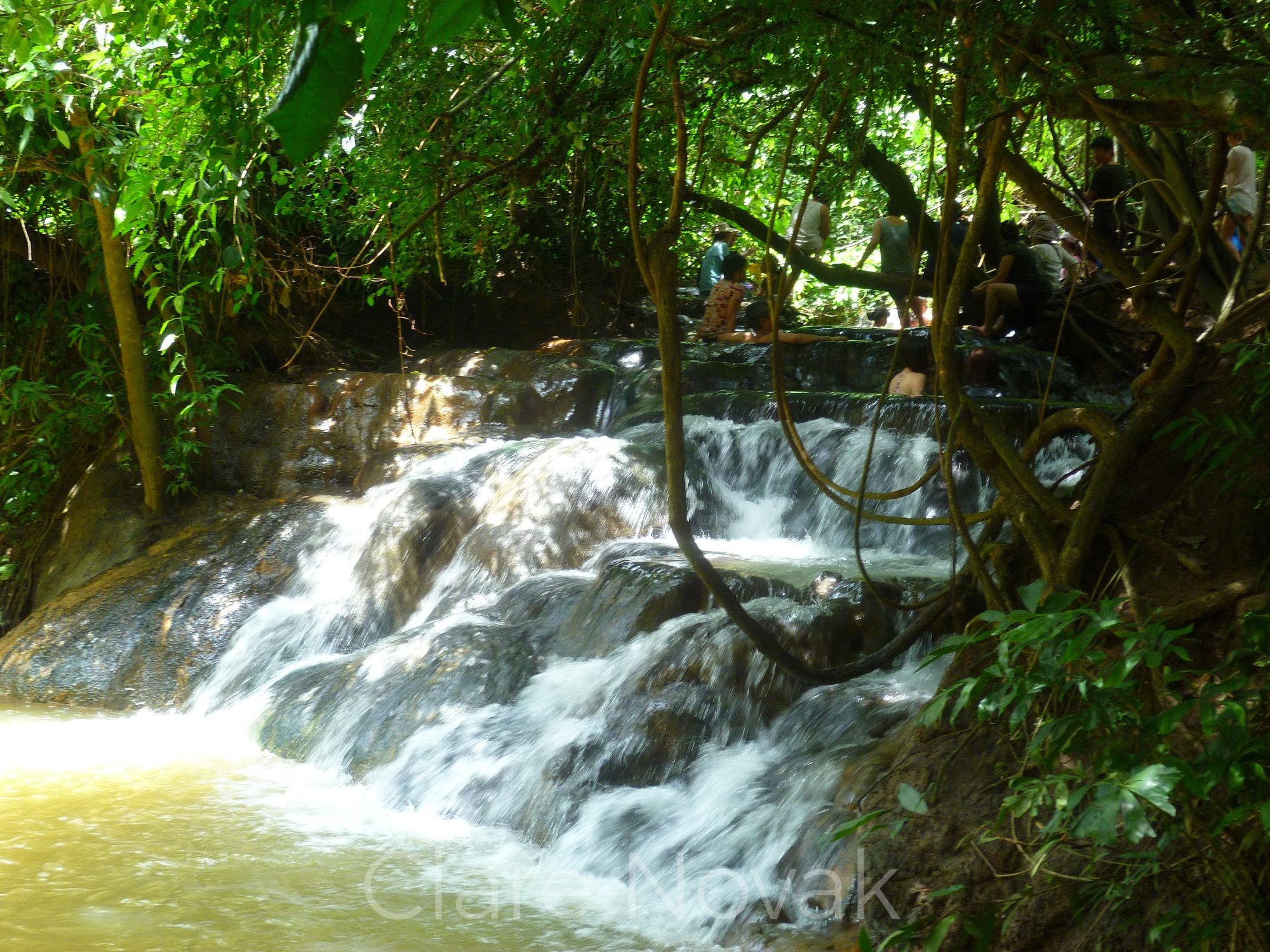 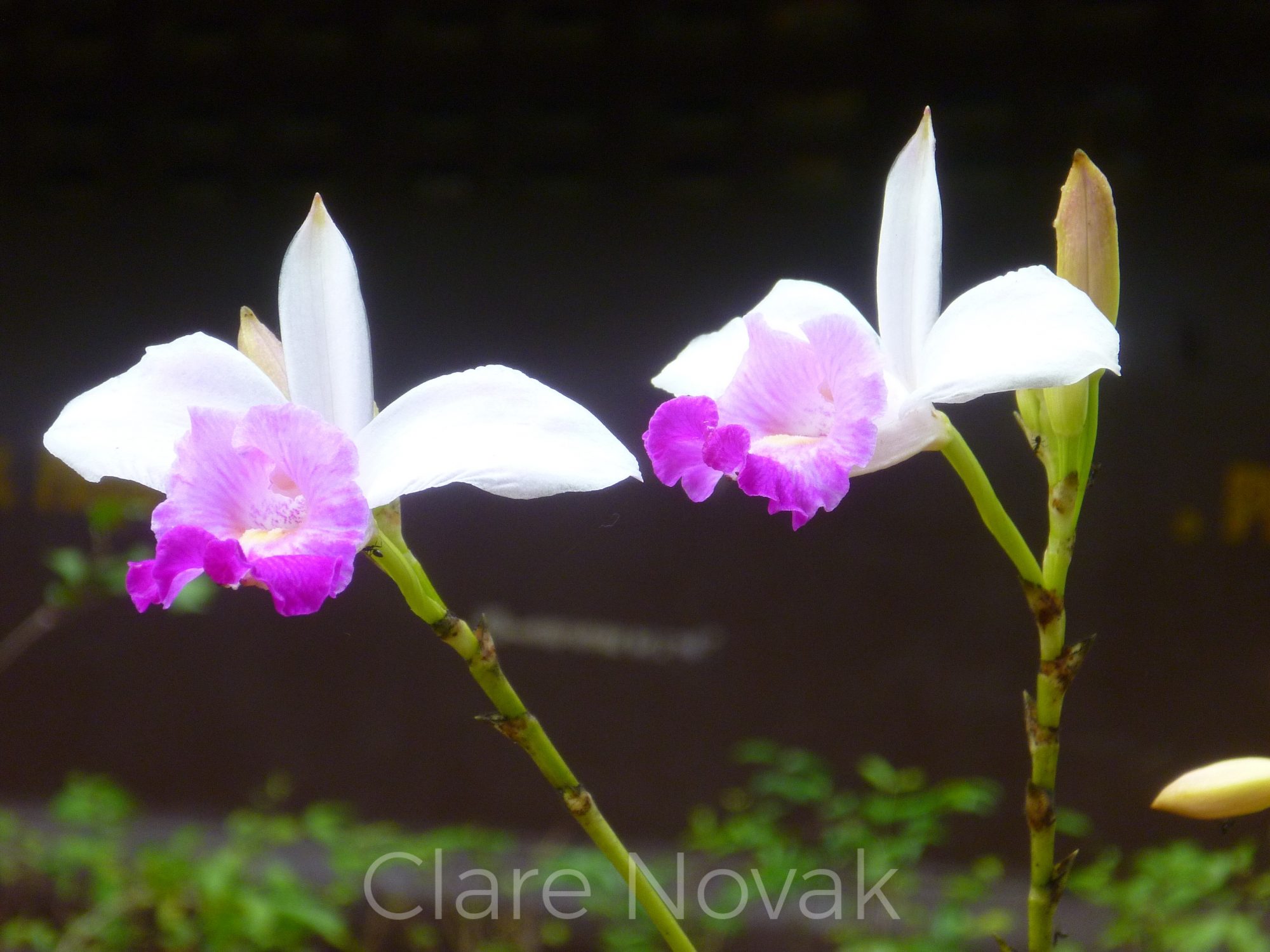 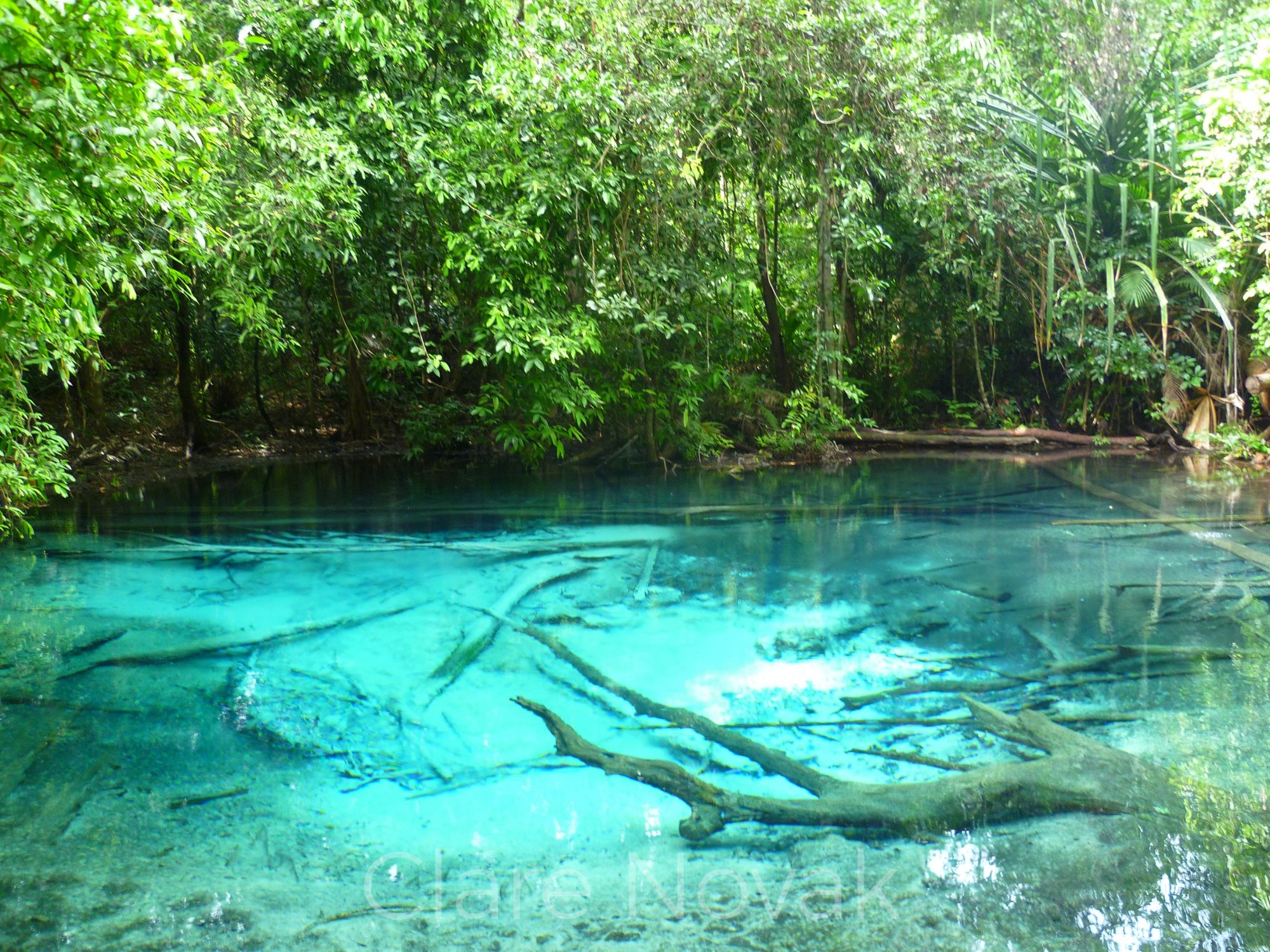 Wednesday, there was a single seat left on the tour van and I took it. Across the aisle from me was a middle aged woman from Singapore. With a loud and annoying voice, she ordered everyone around. “Ok no more pick. You go now. Drive temple.” After that she switched to her native language and continued to loudly harangue her compatriots all the way to the temple. Fortunately, during some later legs of the trip, she was quiet.

First was the long climb to the Tiger Cave Temple, followed by the hot springs and later the Emerald pool. There are over 1,200 steps to the temple and one is to be dressed properly upon arriving at the top. I had settled for wearing my longest shorts and a loose t-shirt over my bathing suit. The hike up took a tad more than 45 minutes with lots of rest stops to catch my breath. I took pictures pretending to only document progress when in reality, I was recovering from the climb more than anything. Determined to, I made it. The view was quite fantastic but the temple modest.

On the way down, I encouraged others that they too could make it, including three young backpackers who clearly needed moral support. I was glad to have the extra time that our tour’s elephant Trekkers didn’t get. I would have felt hard pressed to summit and return by 10:30. Once down I toured the place a bit and waited for my pickup. It was a short drive to the elephant tour to pick up the others and move on to the hot springs.

Soaking in the hot springs felt wonderful on my sore calves. Lunch at the Emerald pool was good, especially the soup. The pool itself was just a local swimming hole and a crowded one at that. Being Eid, the local Muslims took advantage of the holiday to enjoy. To avoid the crowd, I walked on up to the Blue Pool, a mildly interesting thing to do.

On the return, I decided to cool down by walking through a channel feeding the Emerald pool, slipped, banged my knee and doused my camera. As soon as I could right myself, I did my best to dry the camera with the intent of saving the sim. There was little of me that was dry and could be used to wipe down the camera.

As we boarded the van for the last time, she turned to me. “Where you from?” “America” “ah, very far” “I work in Pakistan though.” “Pakistan, by India, dangerous place.”

Cambodia and Thailand were two wonderful vacations taken during the years I worked in Pakistan. The posts are largely as…

A Second Day in Paradise

May 25, 2013 Cambodia is peace. The people are sweet and helpful. The tuck tuck driver doesn’t mind if you…

Traveling from Tashkent to Kokand, where our worksite was located, proved an interesting journey through mountain passes. As we left…