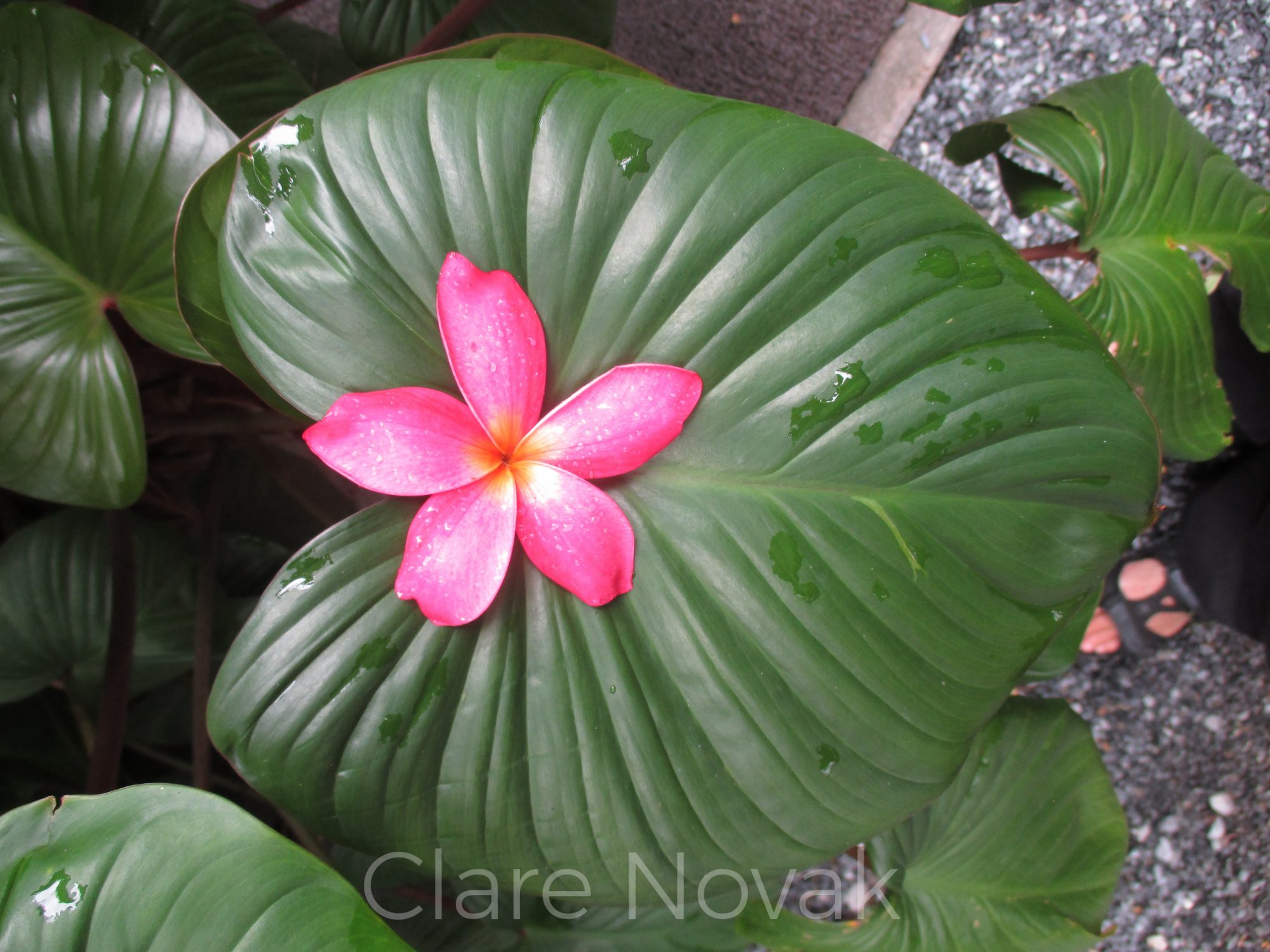 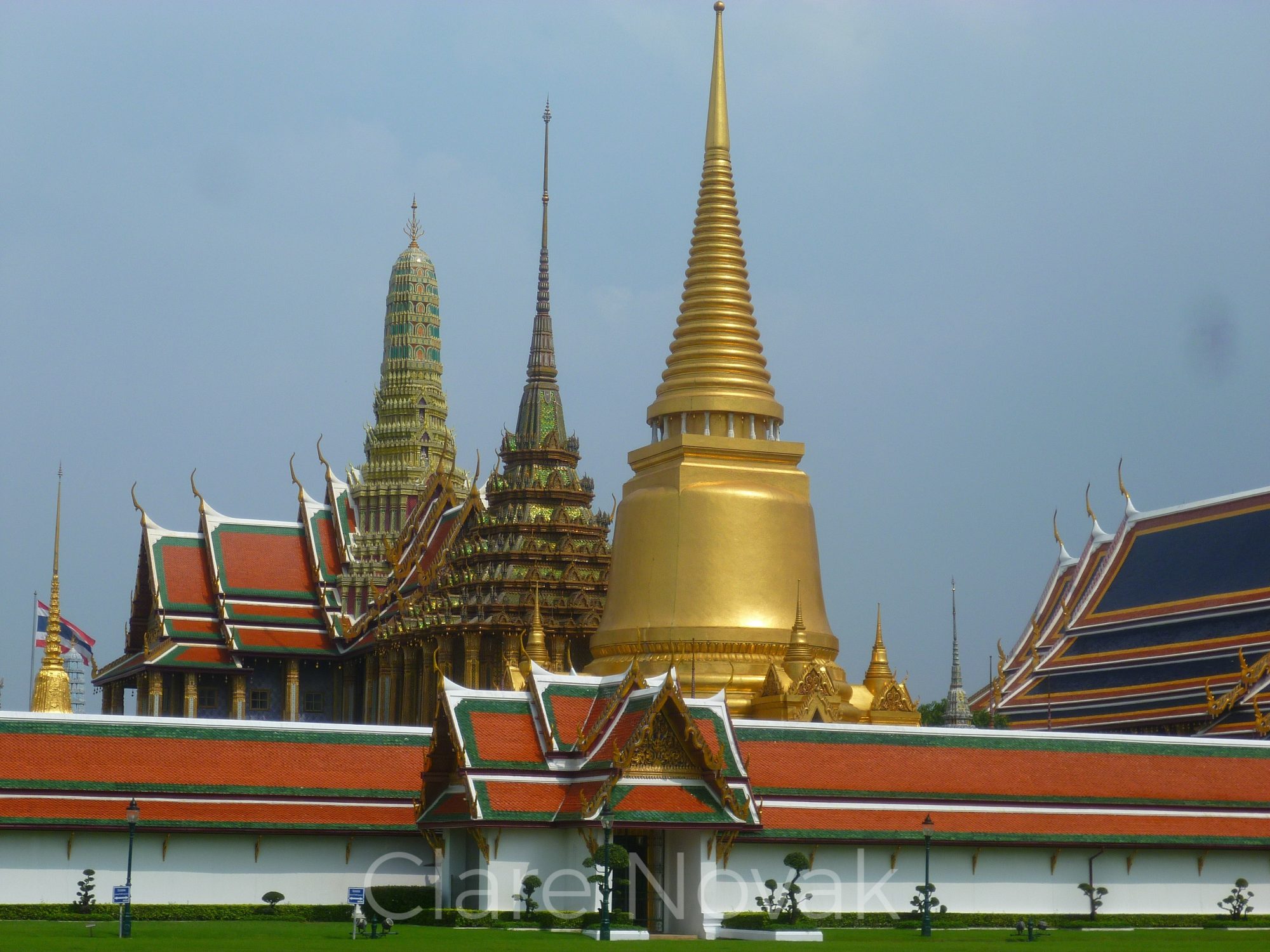 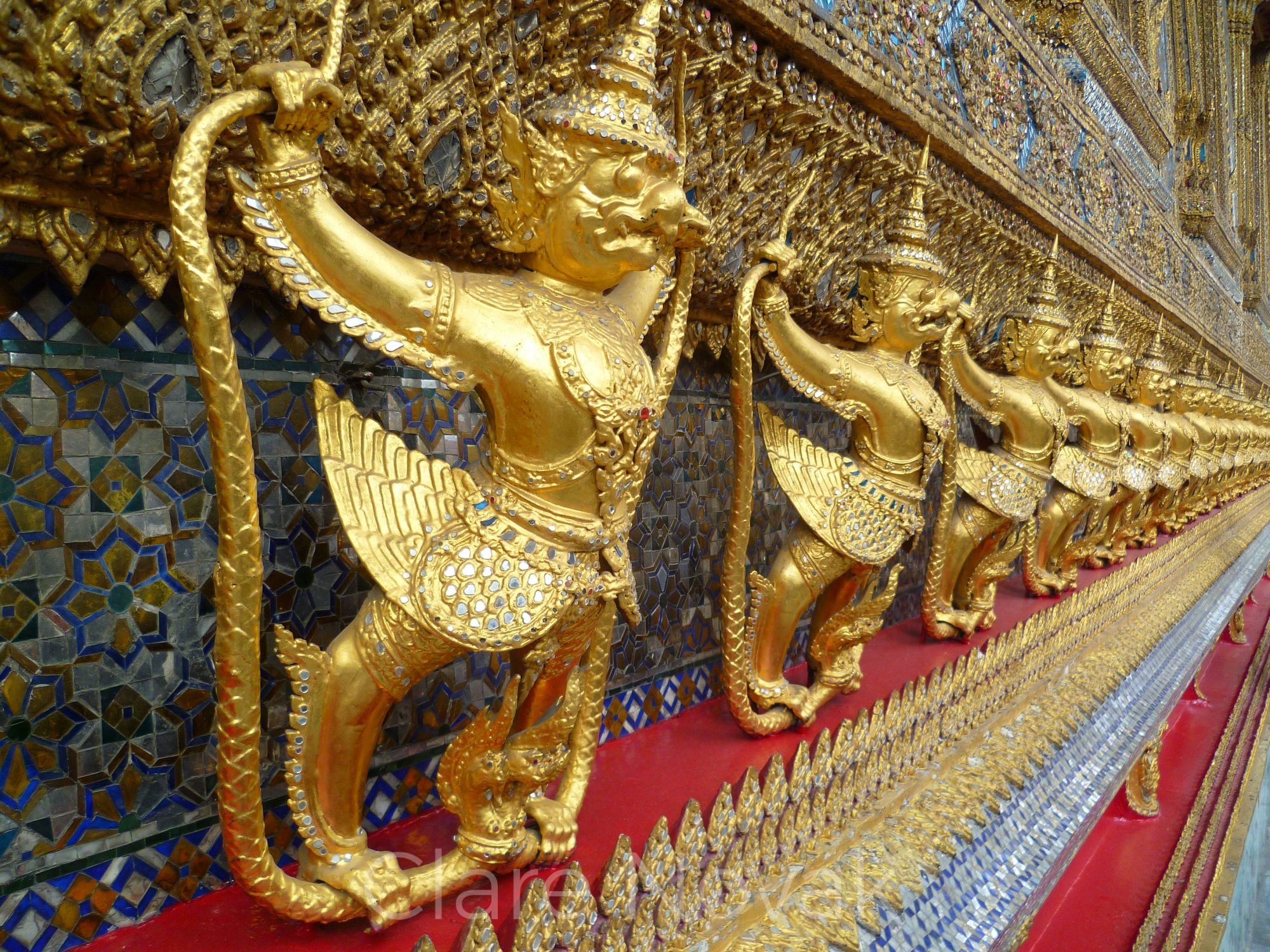 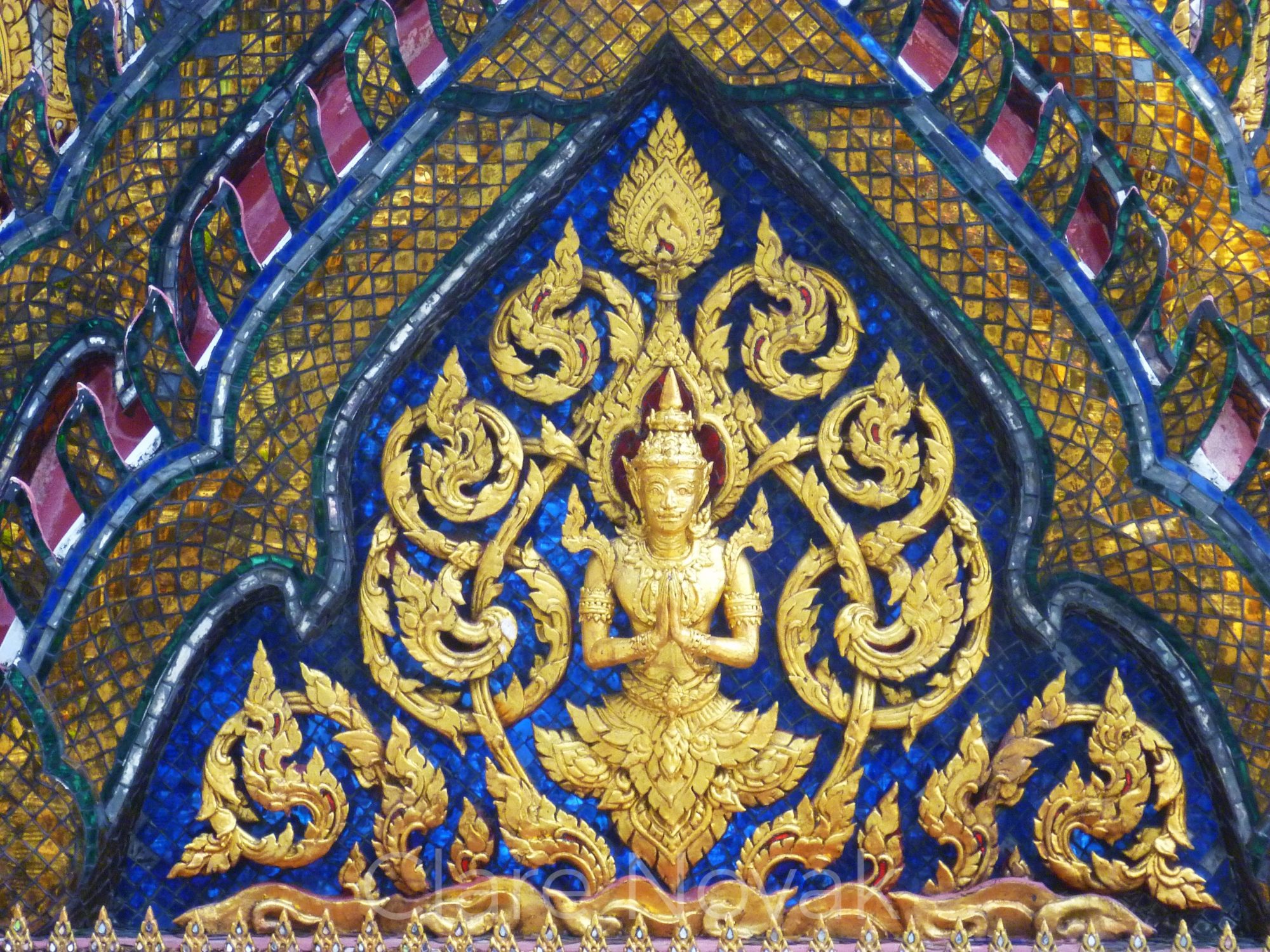 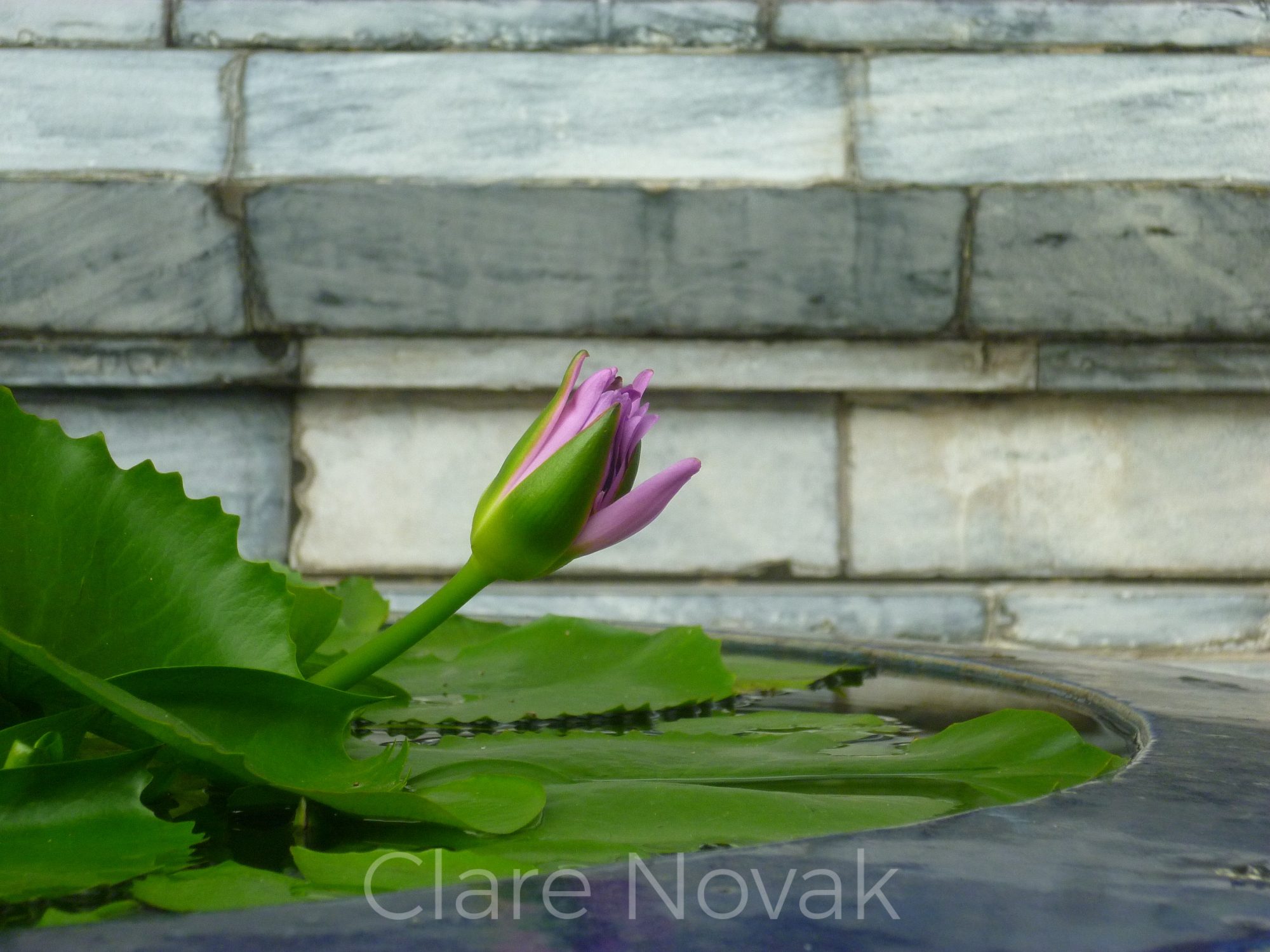 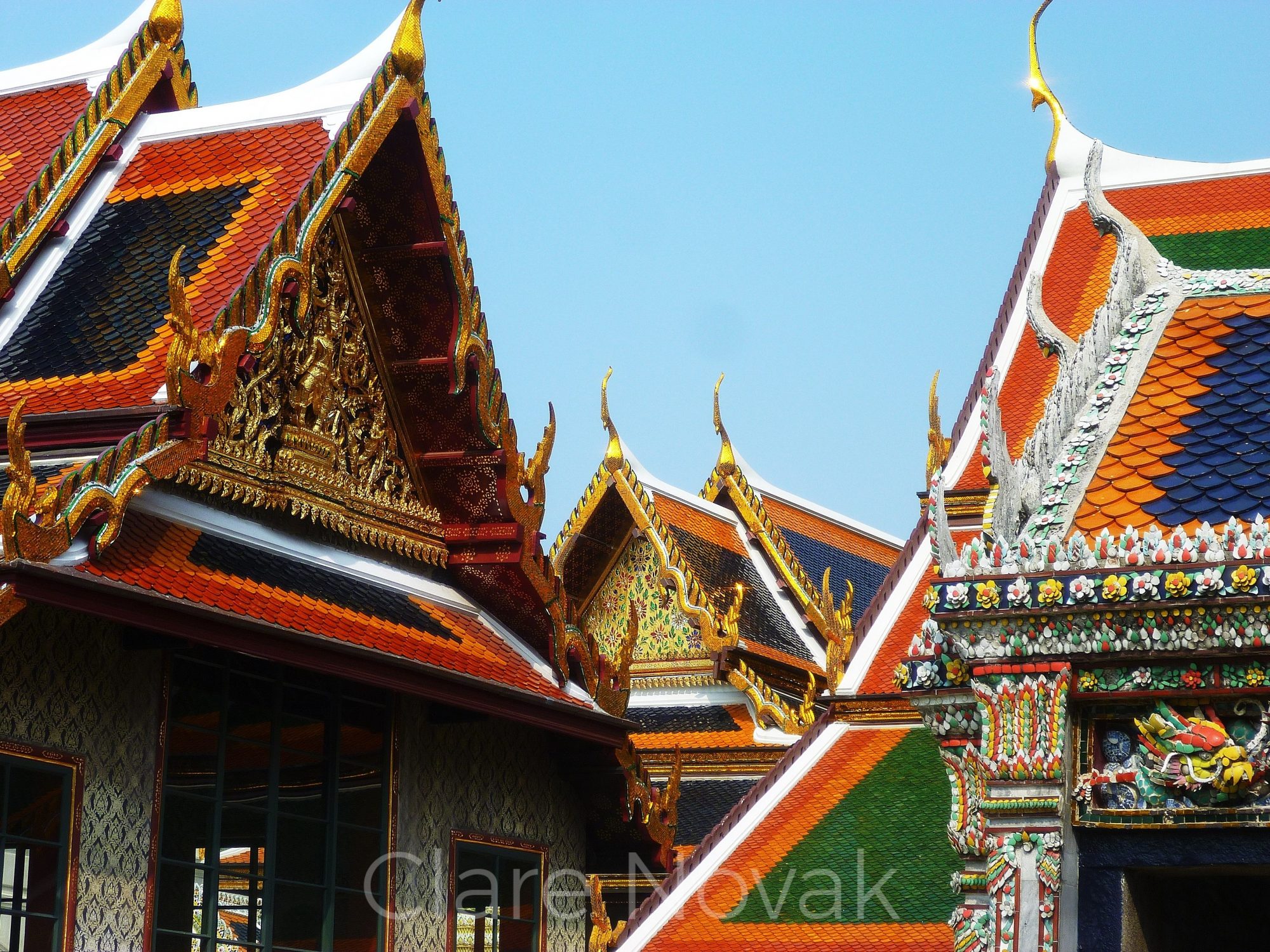 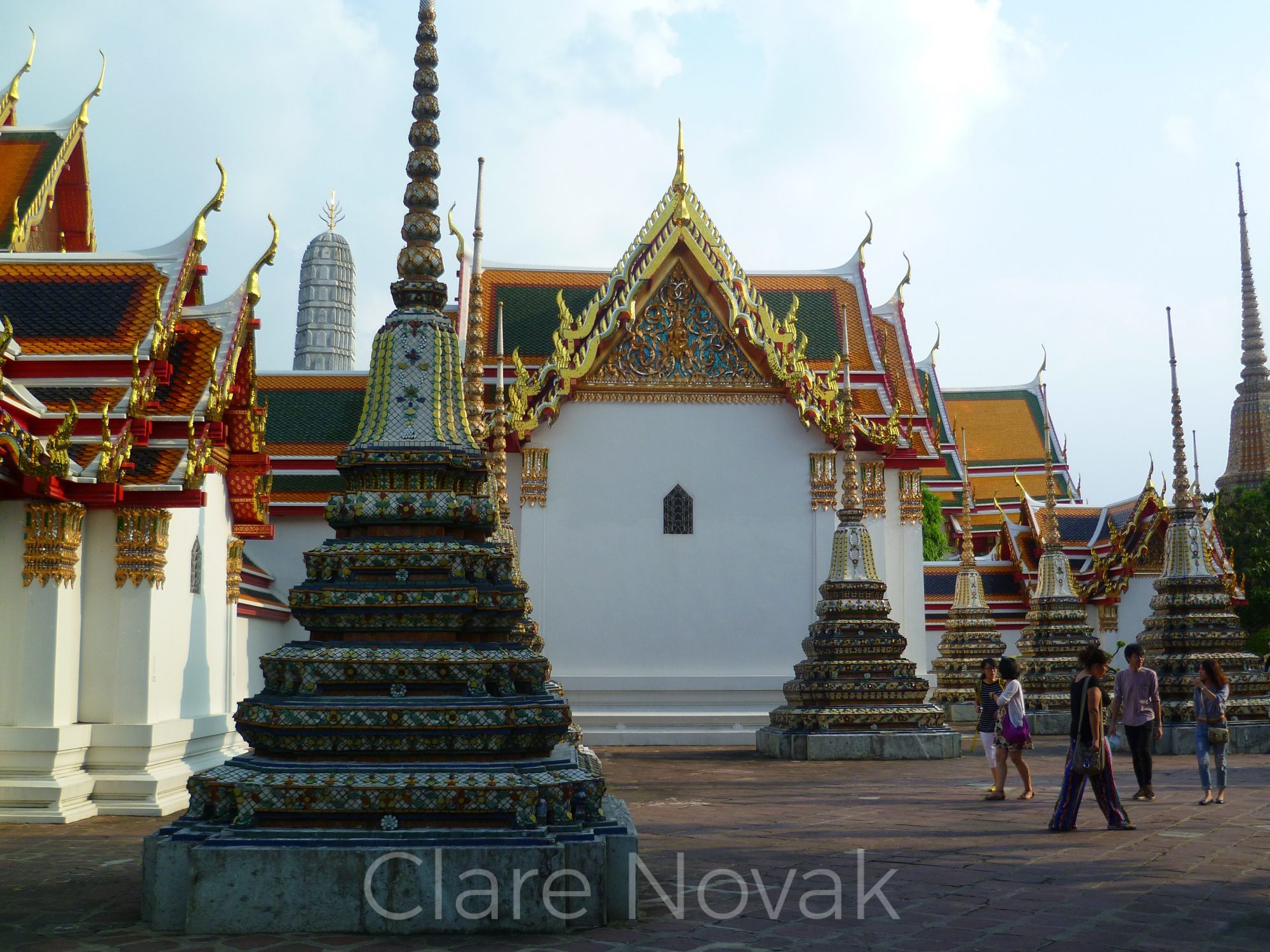 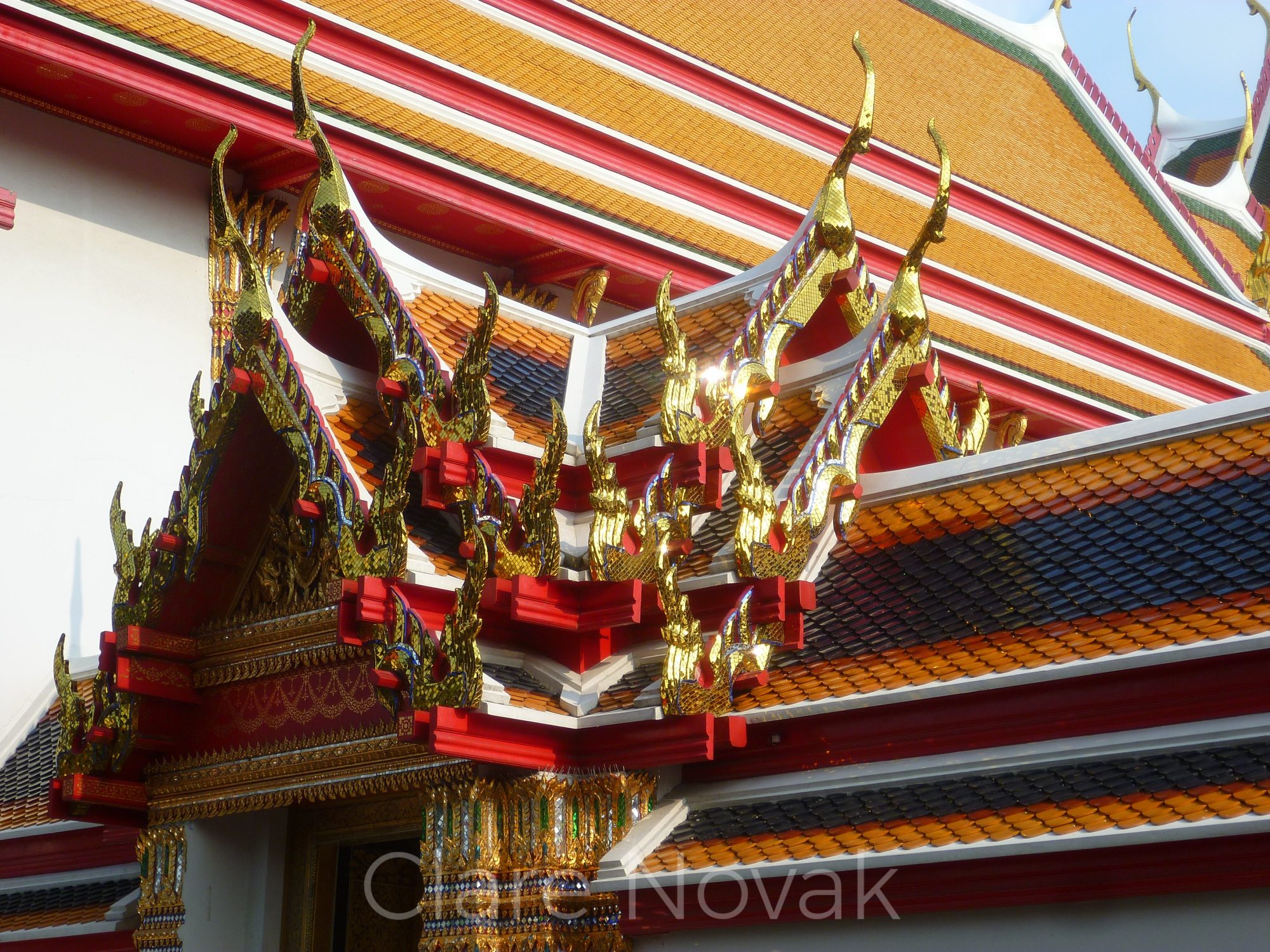 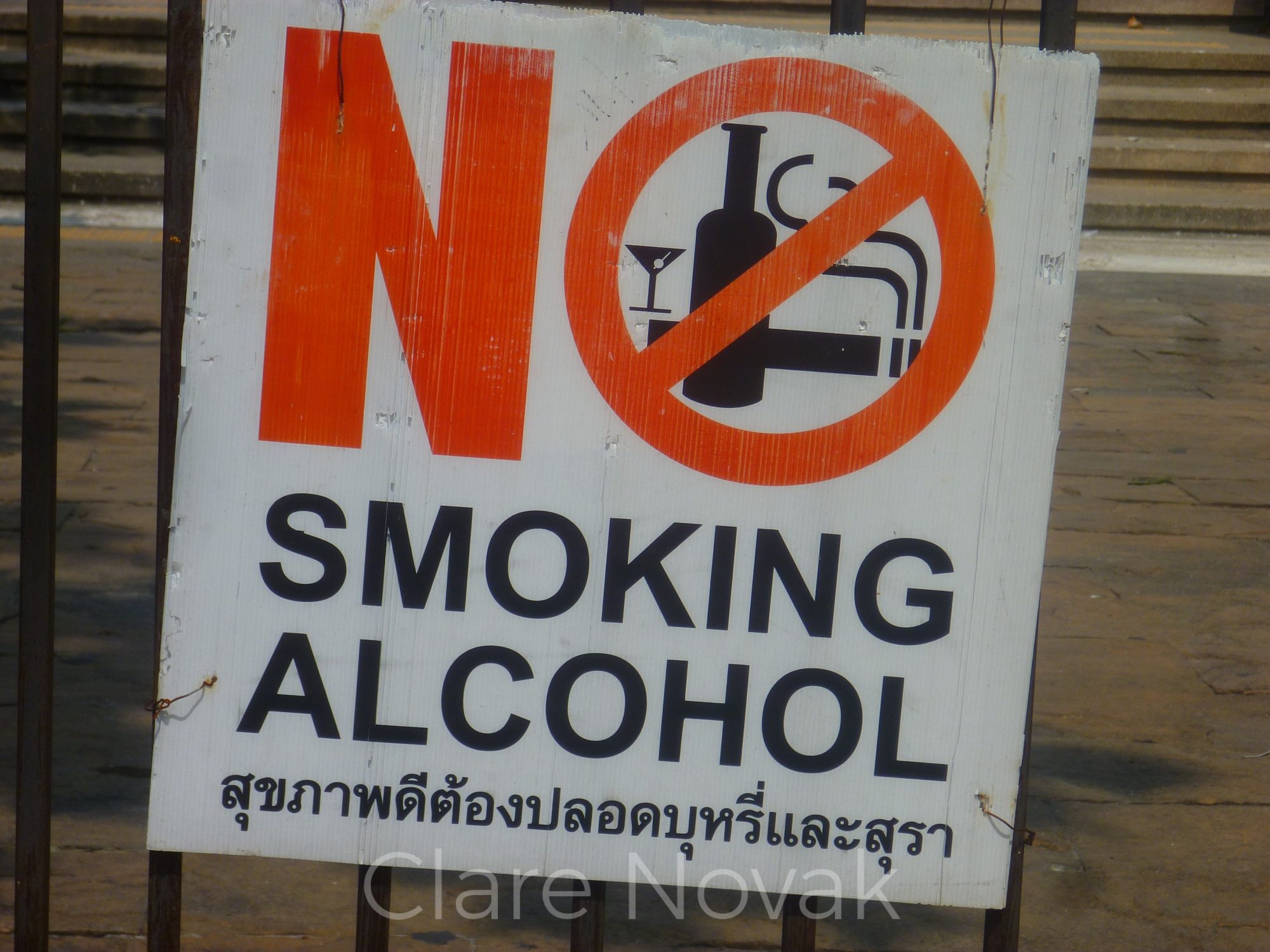 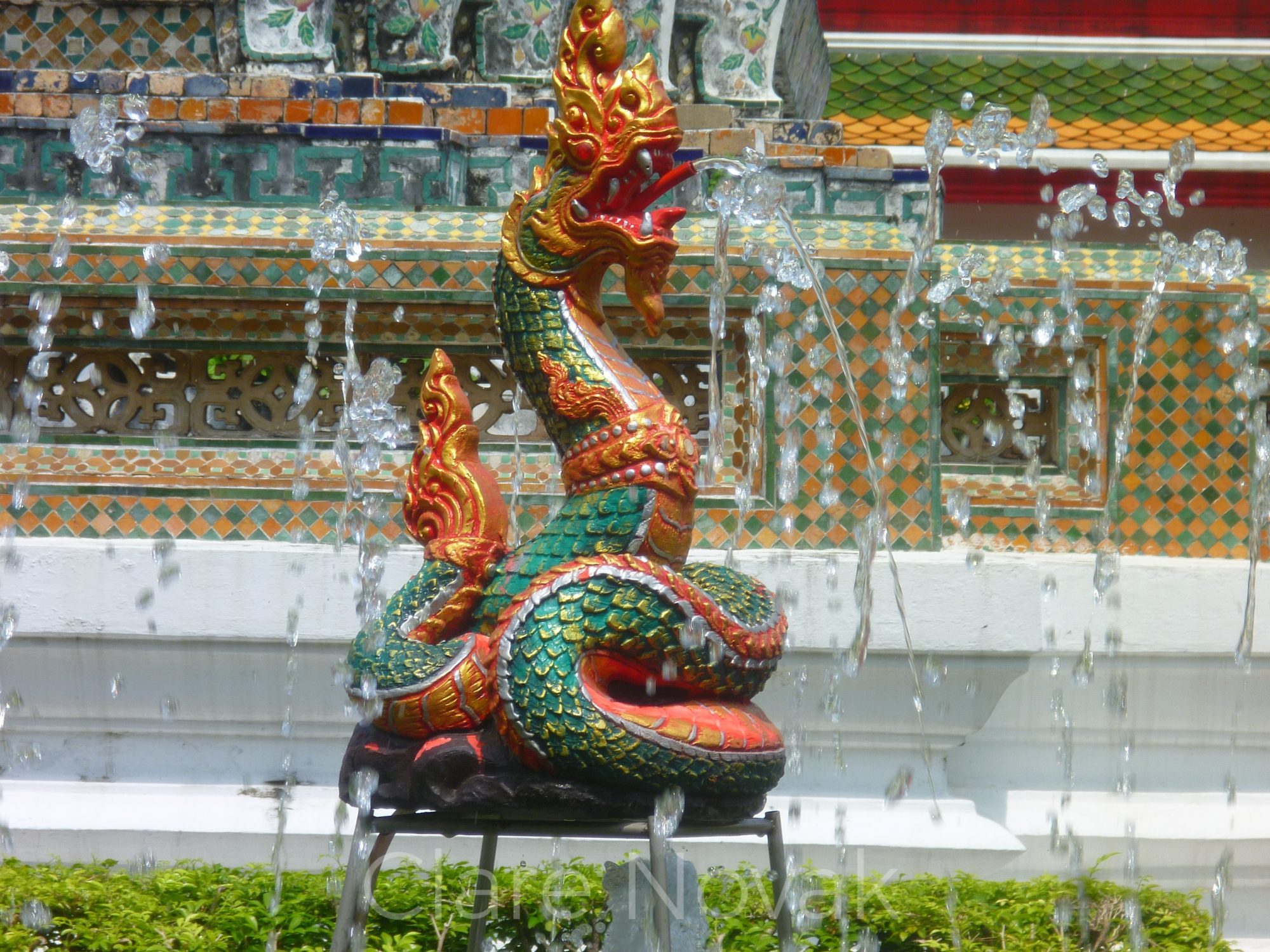 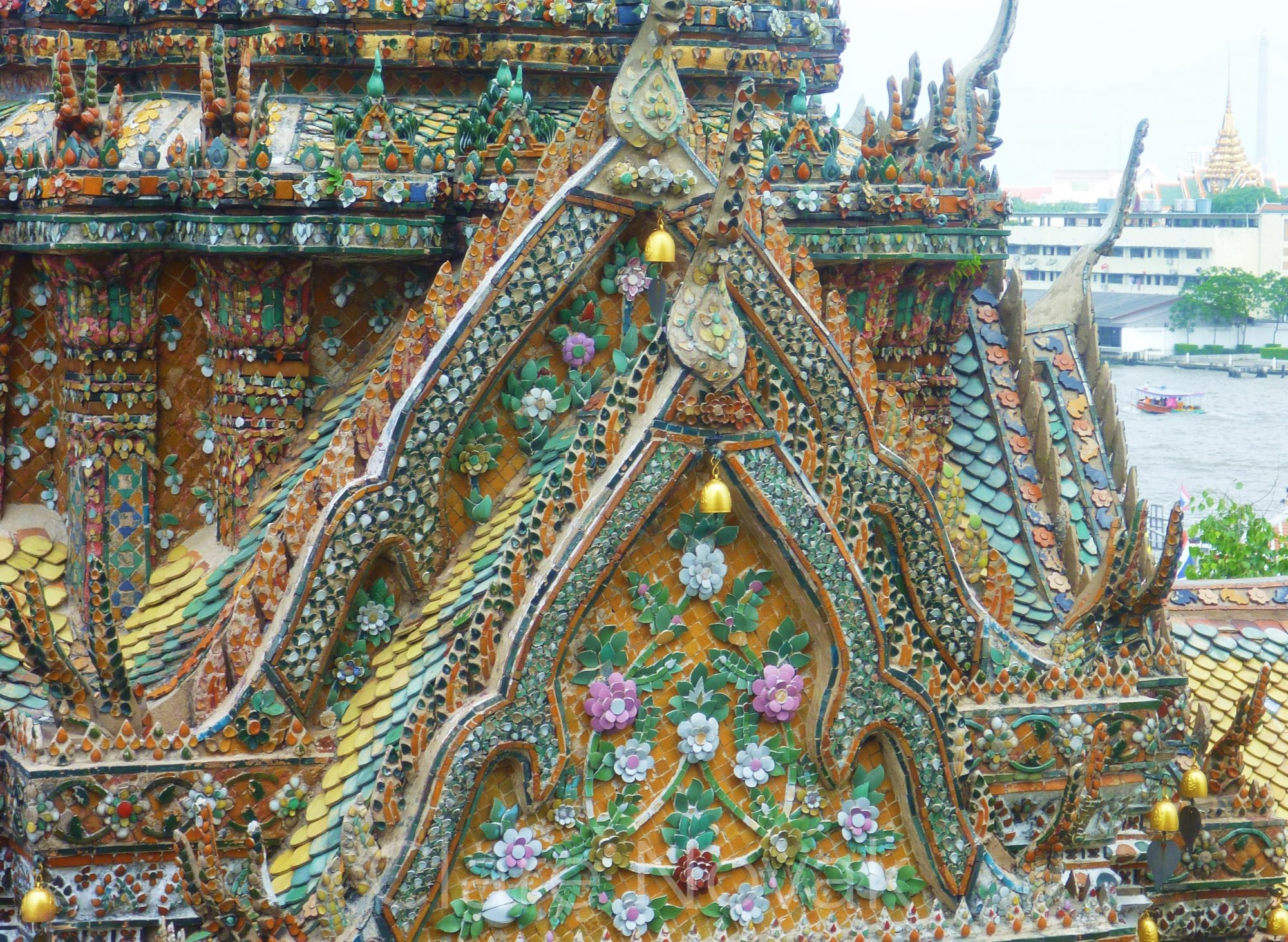 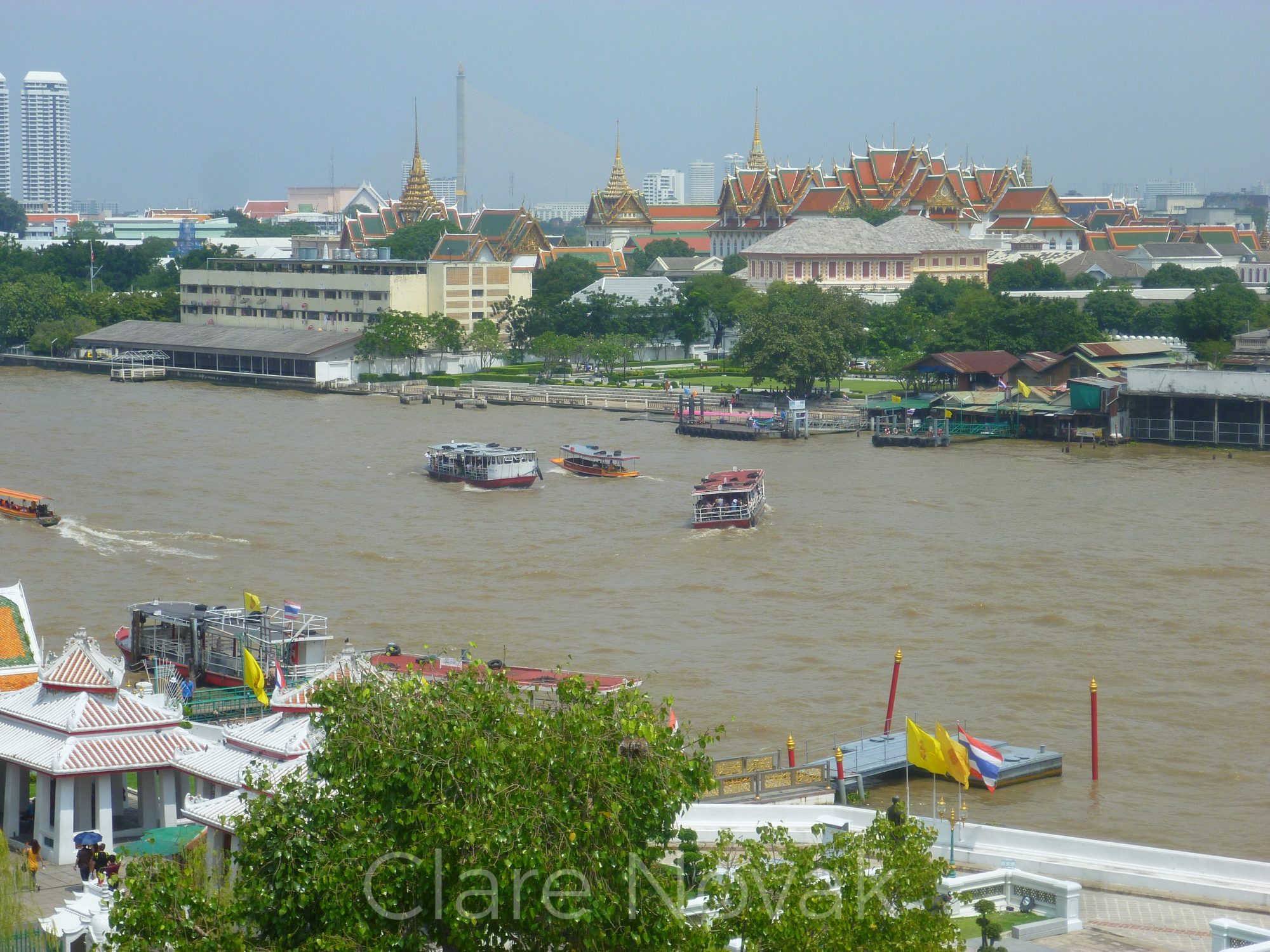 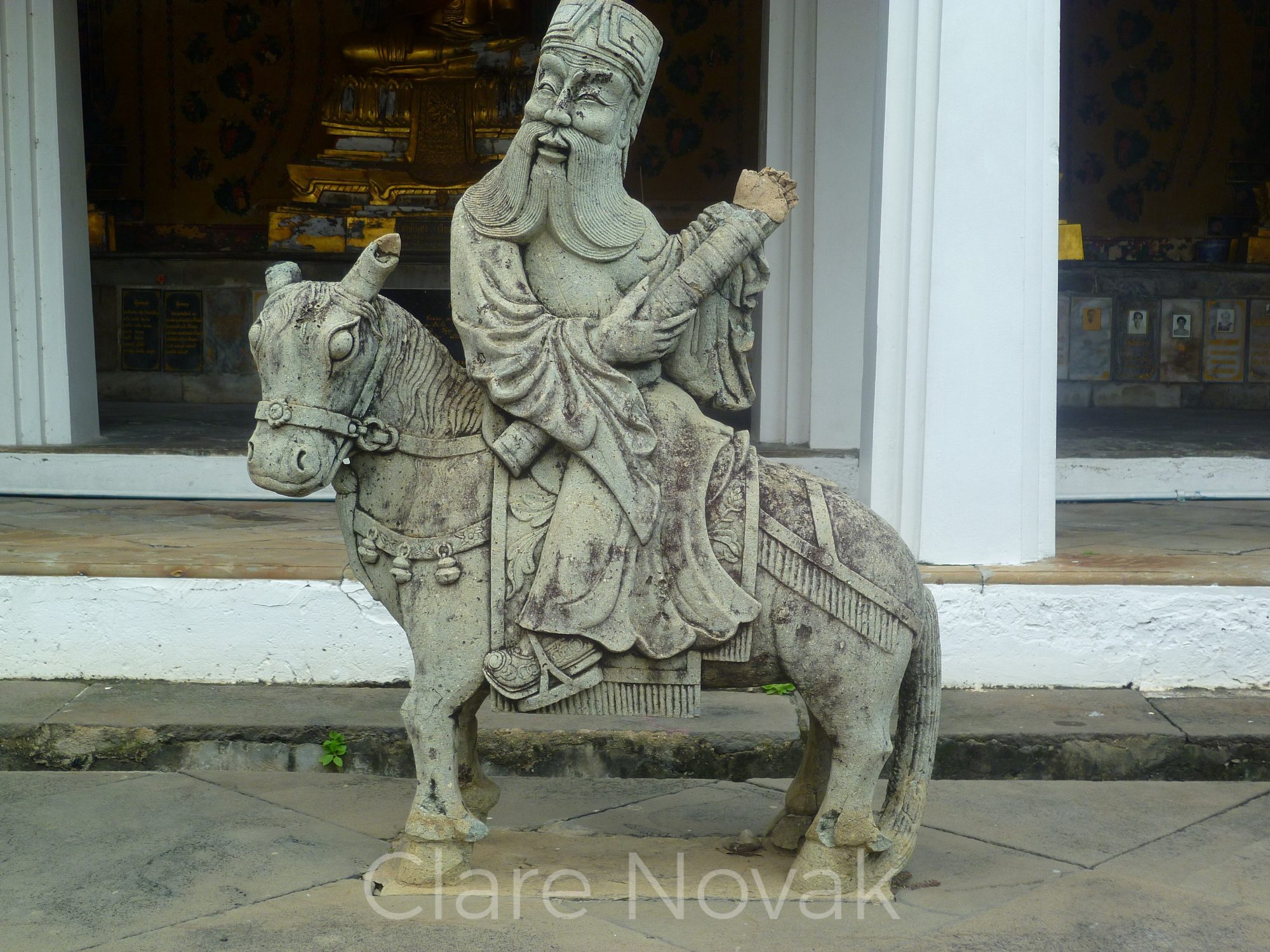 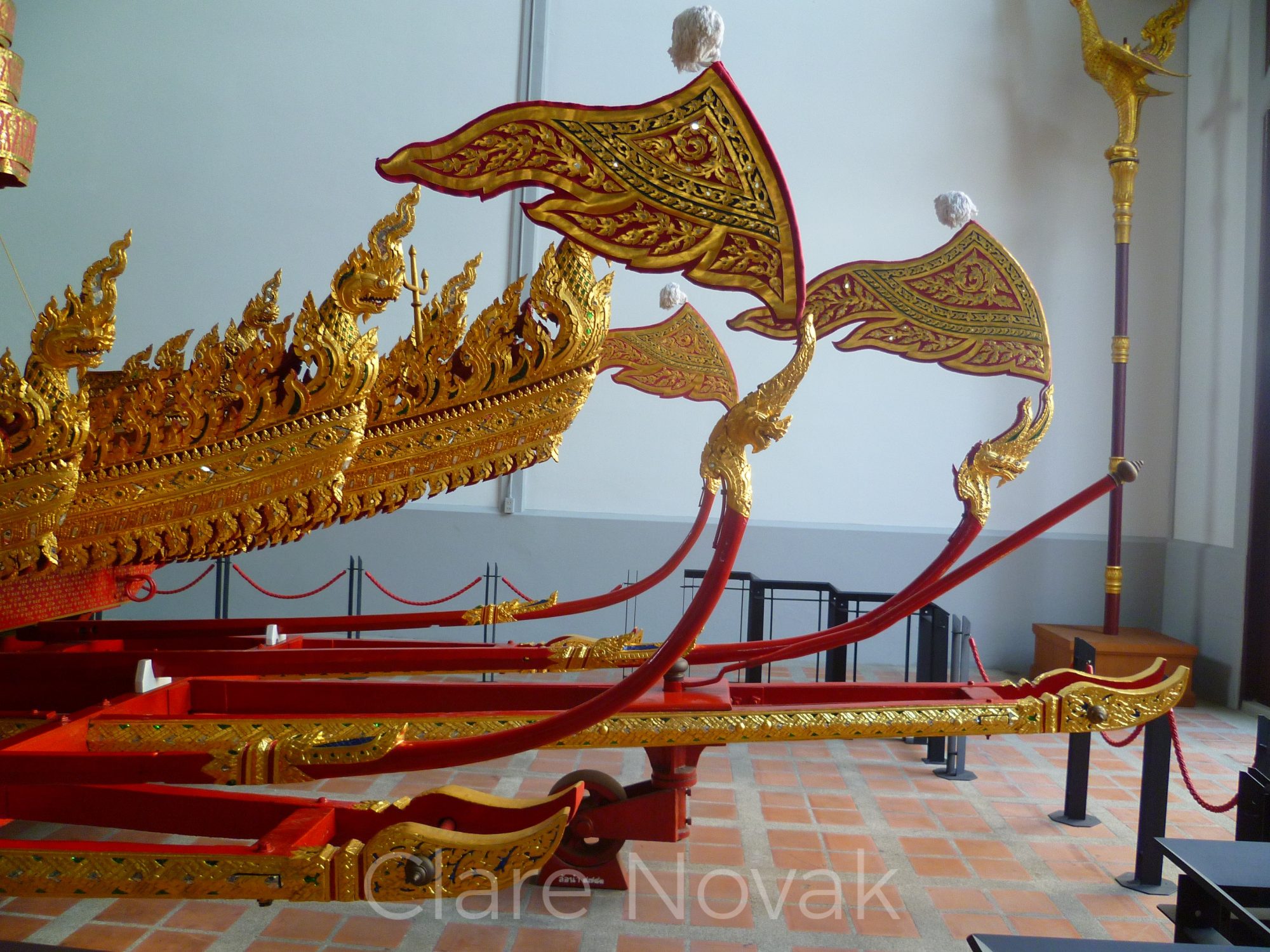 Cambodia and Thailand were two wonderful vacations taken during the years I worked in Pakistan. The posts are largely as I wrote them at the time, although for other people’s privacy, I’ve edited personal details. Back then there was an “us” which, sadly is no longer true.

It has been a glorious two days in Bangkok. Bacon for breakfast, pork for dinner and amazing sights in between. For both days, we wore our feet out walking, touring temples and repeating the idiotic expletive “wow” far too many times. These temples are a world apart. We saw the Emerald Buddha, which is actually jade, the Reclining Buddha and the Golden Buddha, that is in fact, gold. For good measure we did Arun Wat and were quite glad we did as it was on the other side of the river and in climbing the steep stairs, found an incredible view of the city.

In the National Museum is the Royal Carriage Museum. Carriage is far too humble a word. These are enormous gilded land barges requiring the royals to ascend via gilded stairs on an ingenious lift. Th decorative motif is gold, red and mirror work. These are found among both the royals and the temples making everything resplendent with light. Light here is embraced, reflected and shared. After a few days in Au Nang, we had one more day in Bangkok.

Jim Thompson moved silk from a cottage industry to an industry by taking and selling samples to Vogue magazine. In getting rich, Thompson had the luxury of not only buying teak houses but also collecting art, pottery and sculptures. These he housed in the houses. This is a very nice place to visit and we were glad we did. Our afternoon was a tour of the Queens Gallery Art Museum that was quiet and a nice hour. Finally, there was no more postponing and we headed for the airport with no enthusiasm whatsoever.

The amateur mother/daughter travelers in the line for passport control managed to have lost their exit card. Not only did they not have the exit cards, they had mixed up their passports as well. By the time they sorted themselves out and I got through security it was time for answering a call from Mother Nature. Rather than eliciting a laugh, the “Happy Moment” sign by the bathroom got a wry, “Should have been ‘Happy Movement’

Virsa Lok, proved an interesting experience. One follows the white marble road to weave in and out of the cultural…

For two years, I lived and worked in Pakistan. No doubt you've already formed an opinion of what that was…