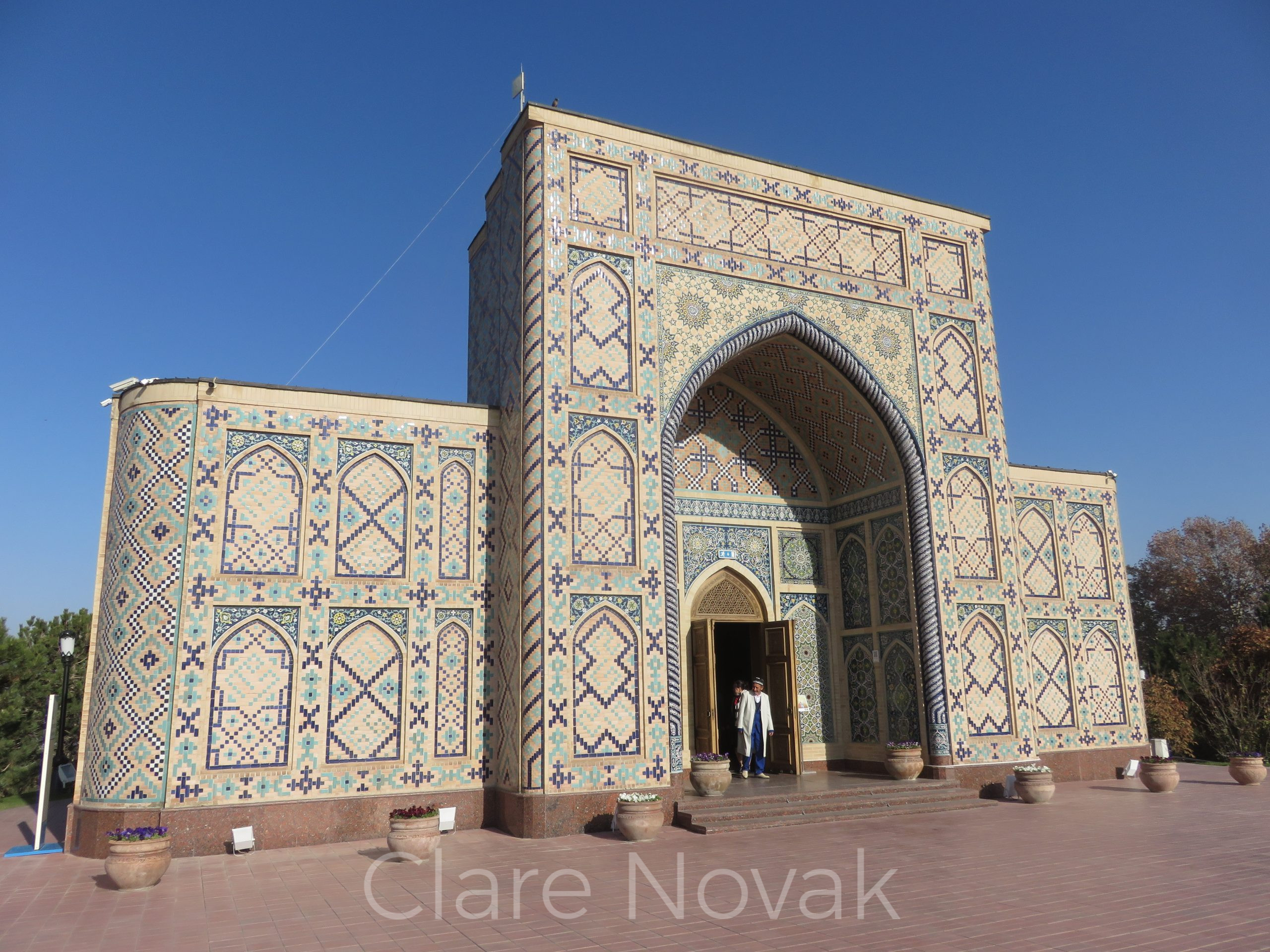 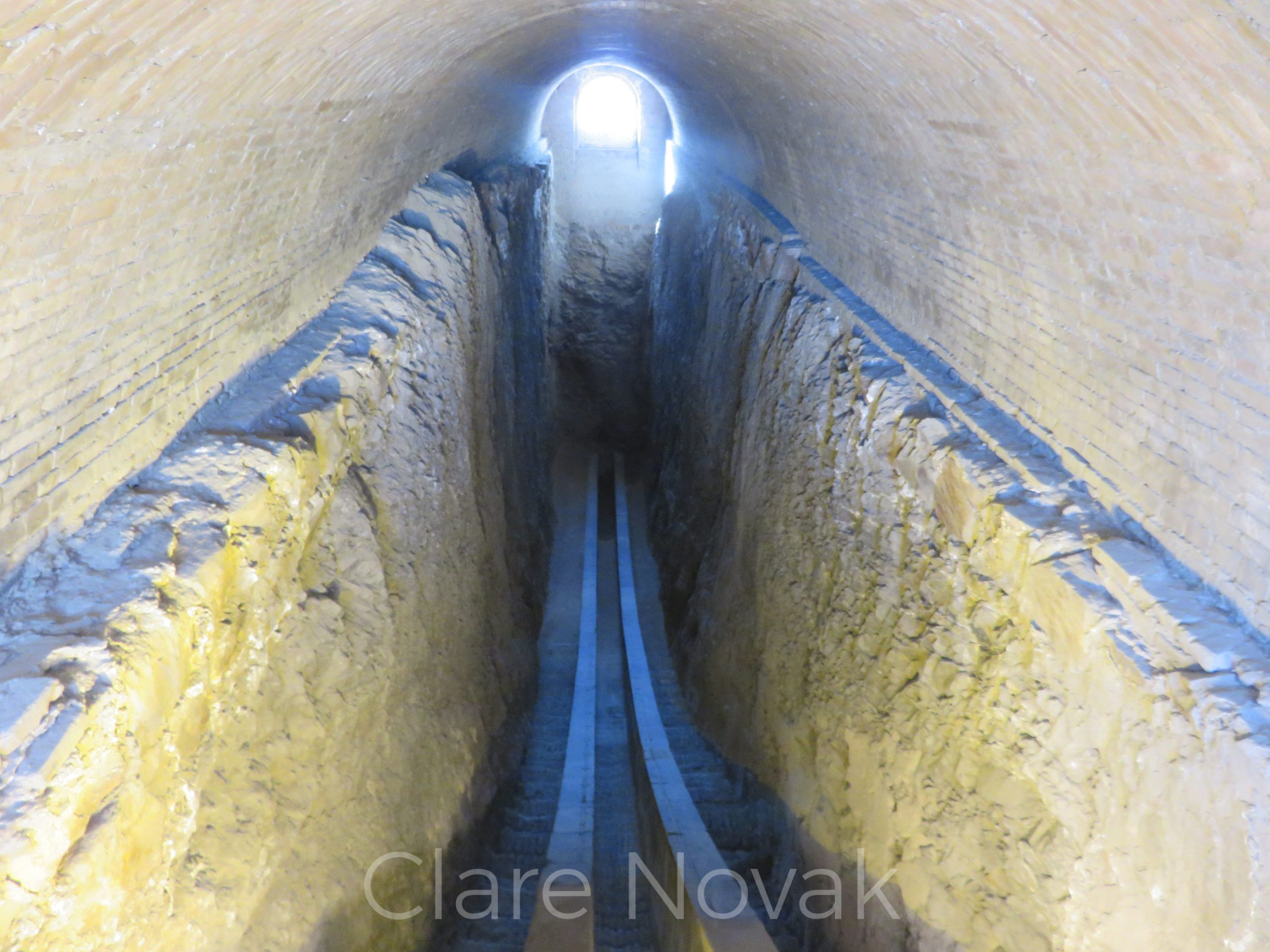 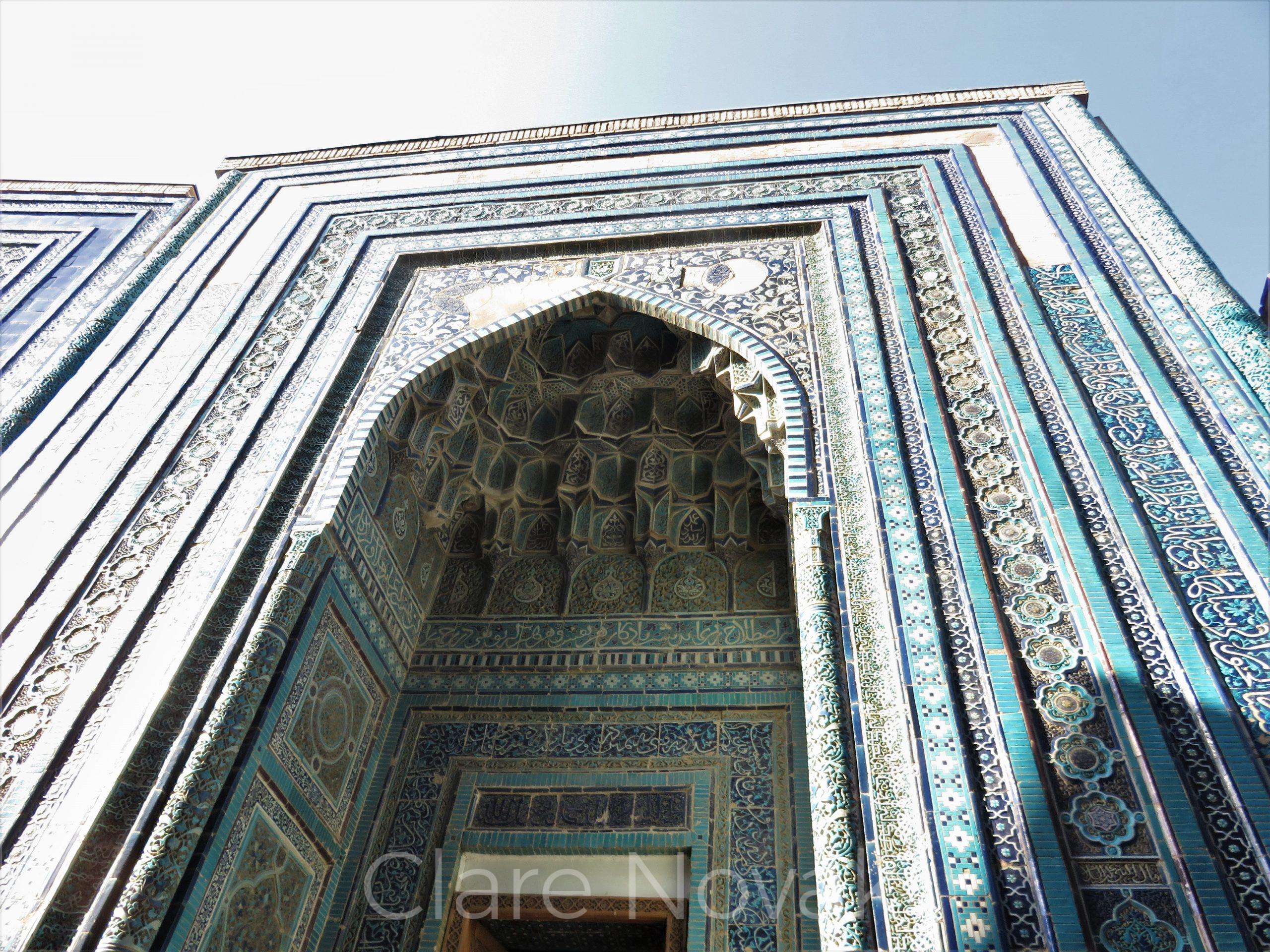 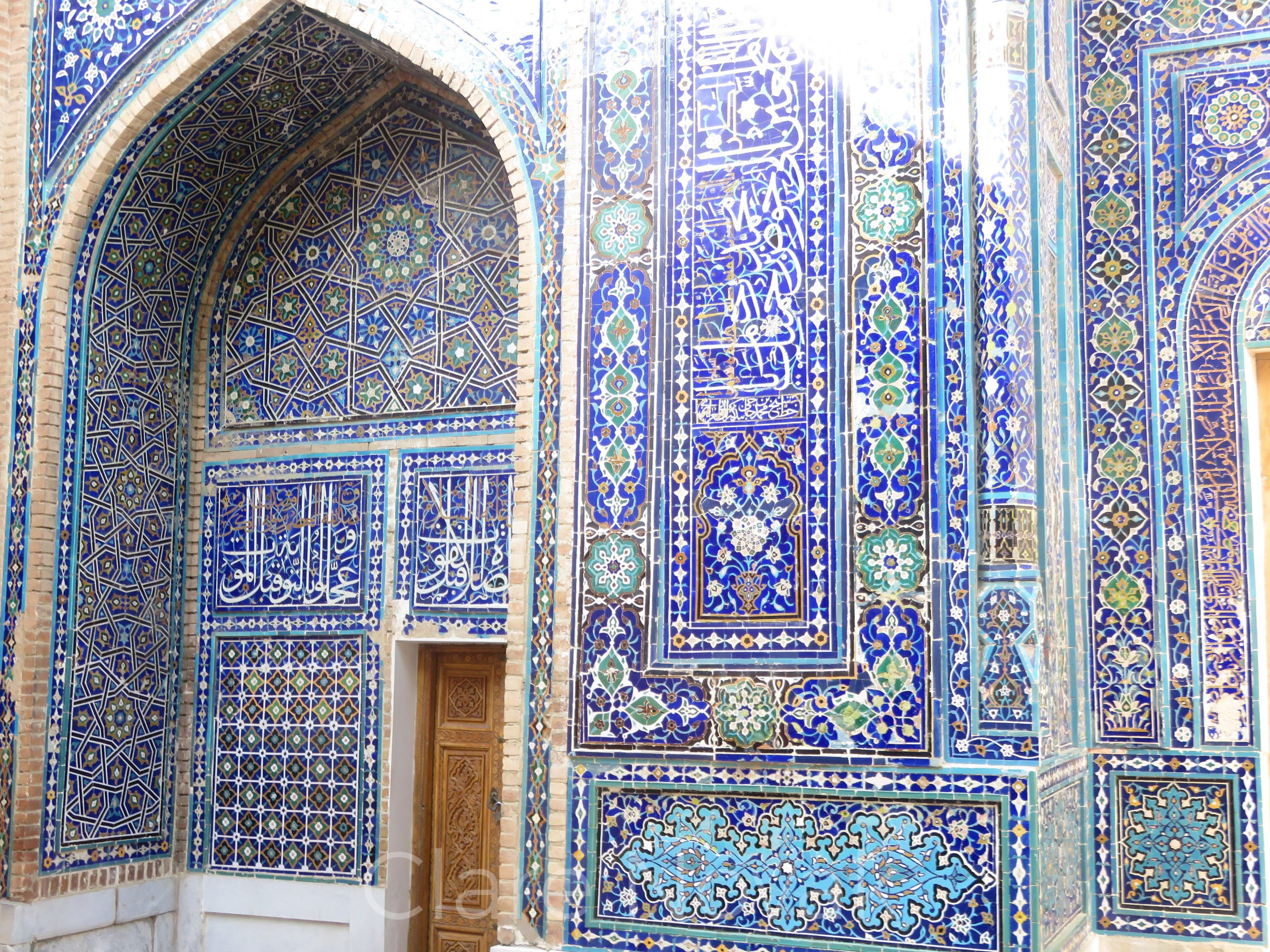 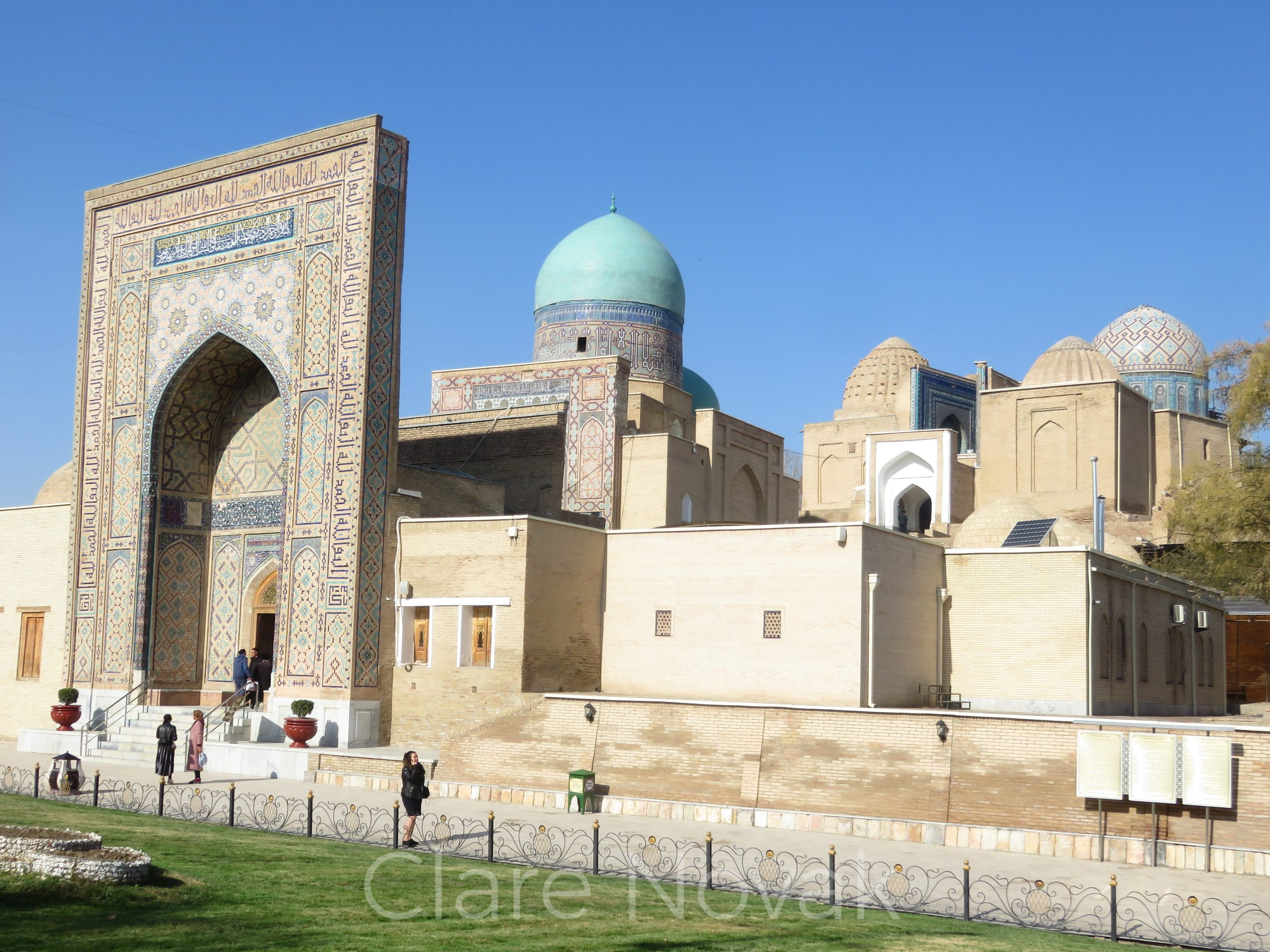 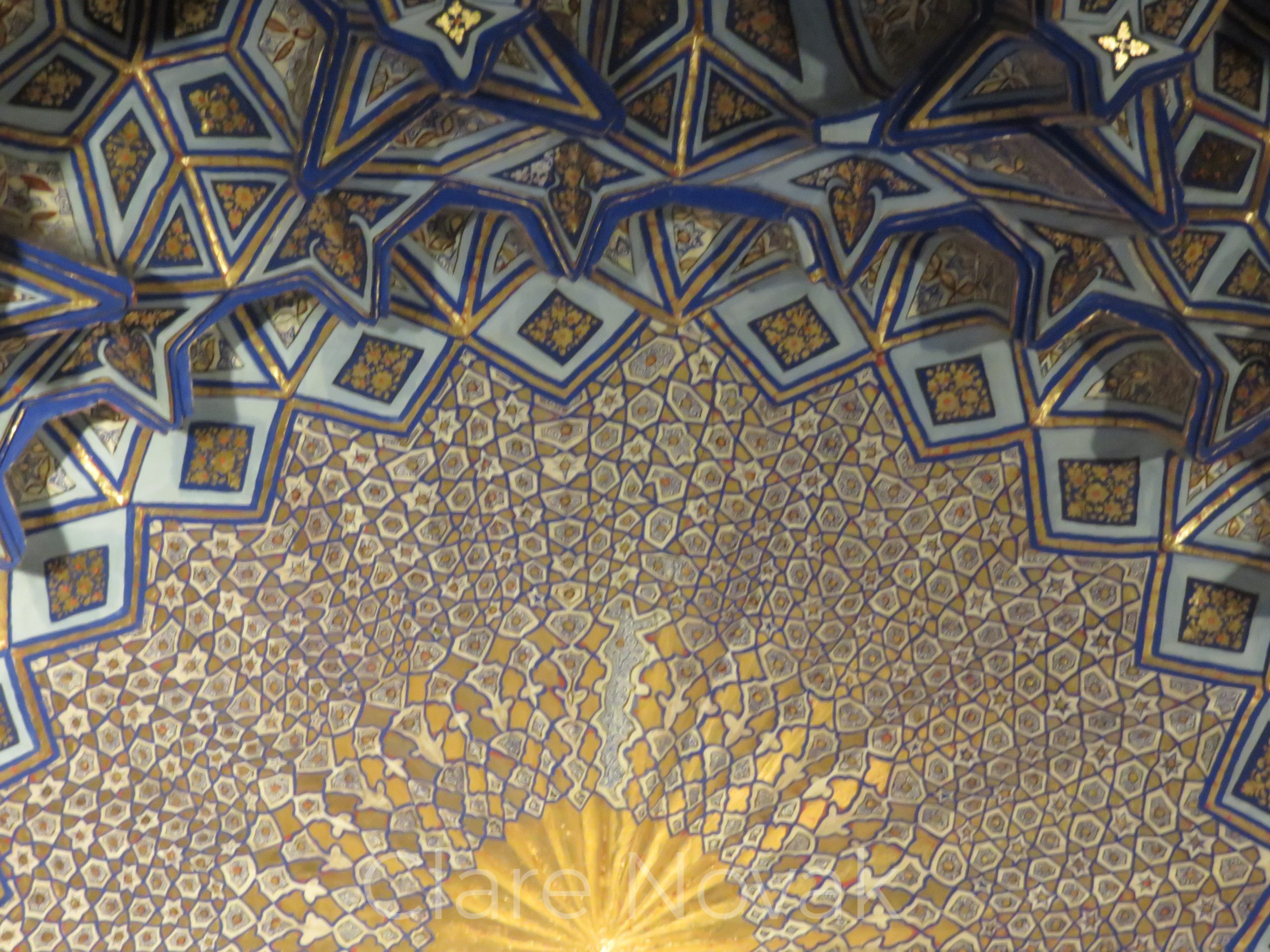 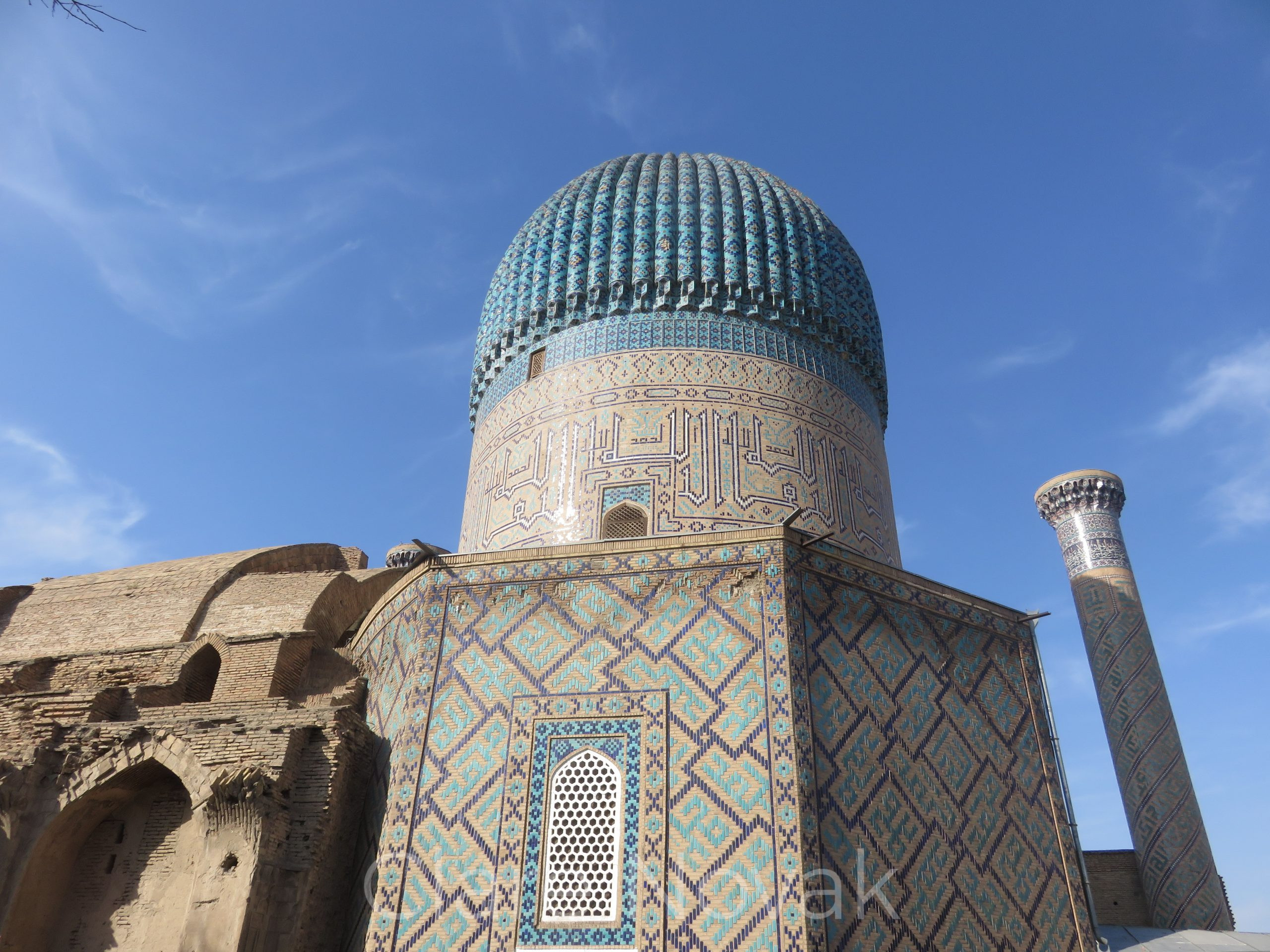 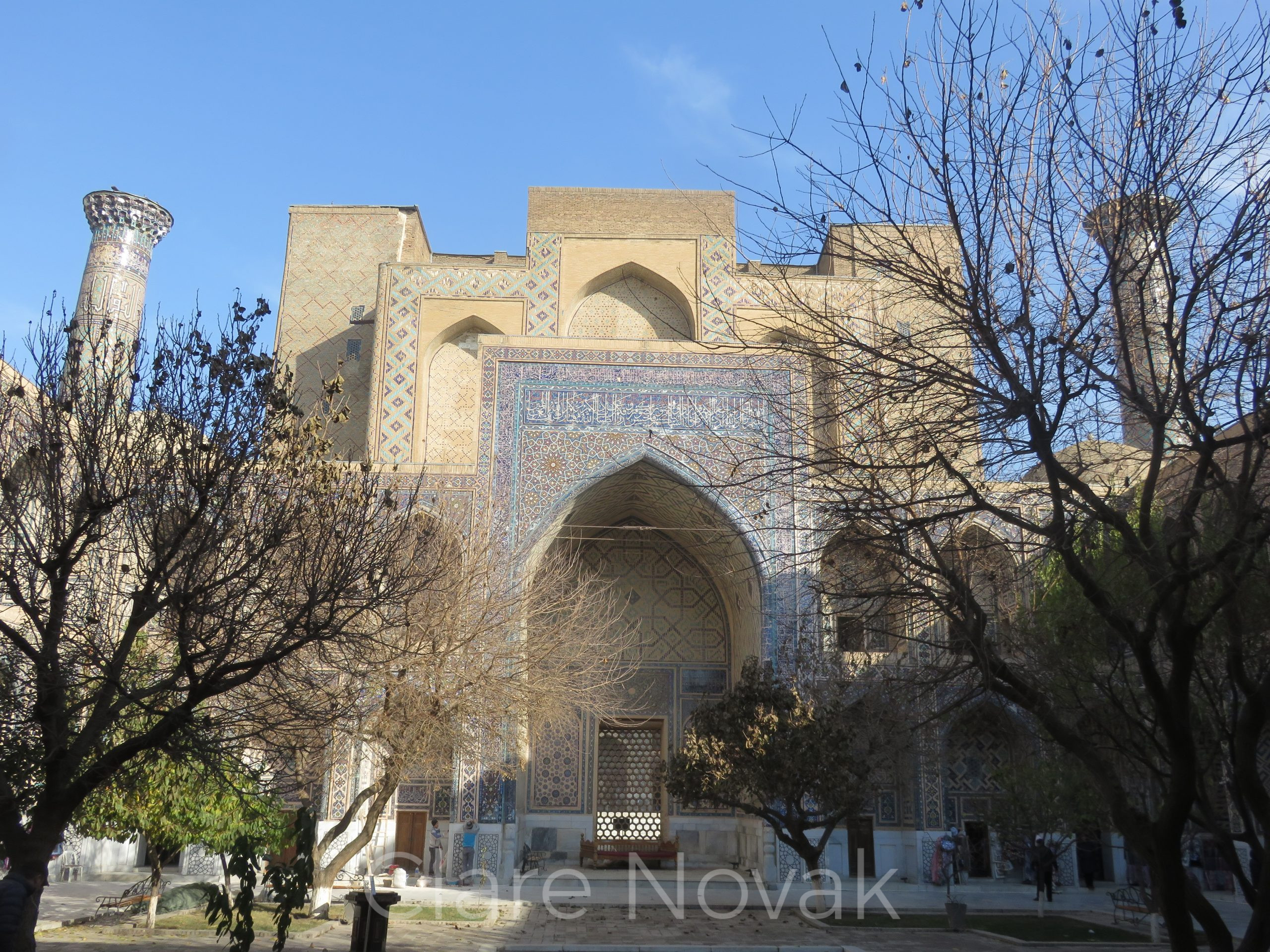 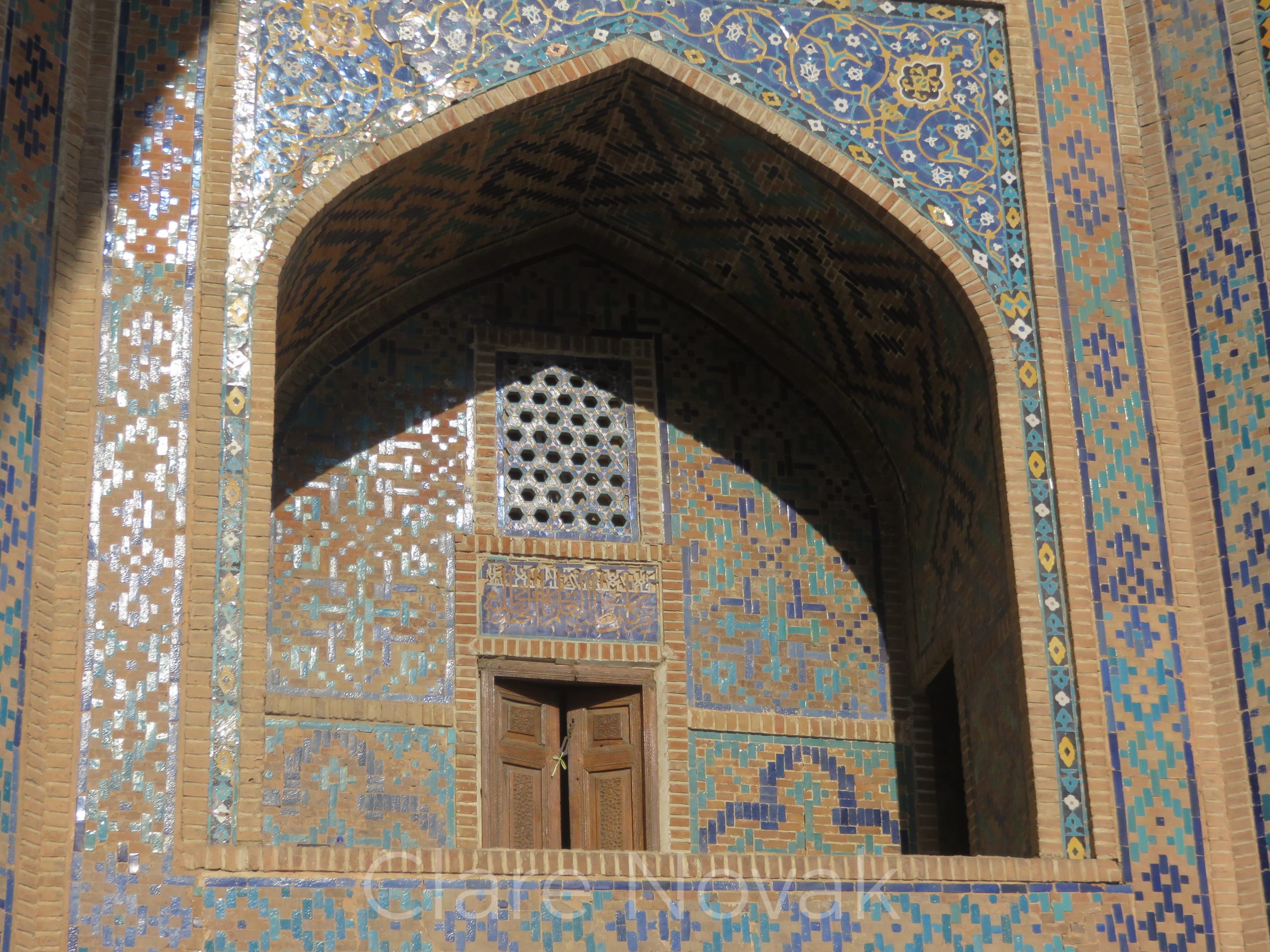 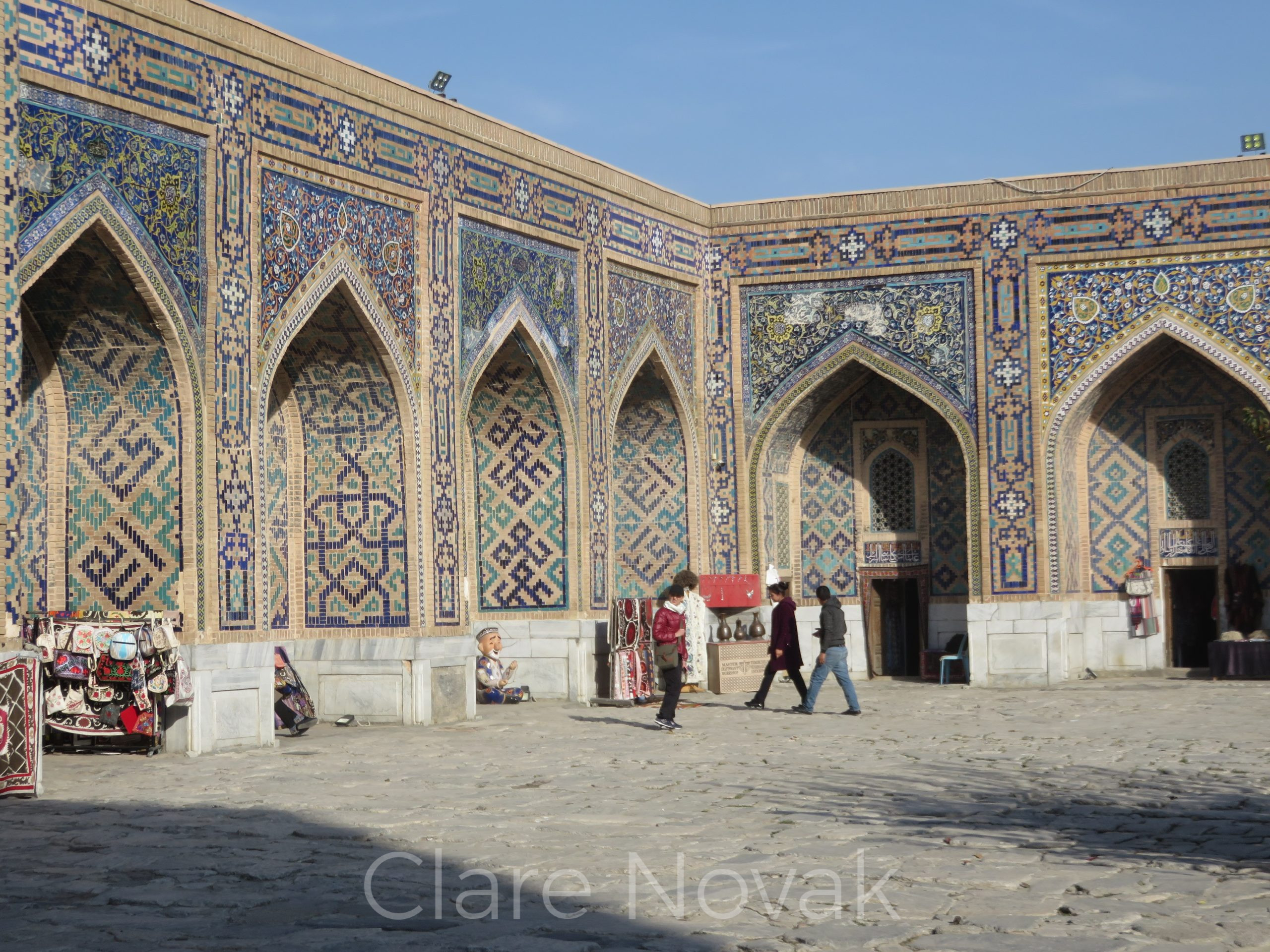 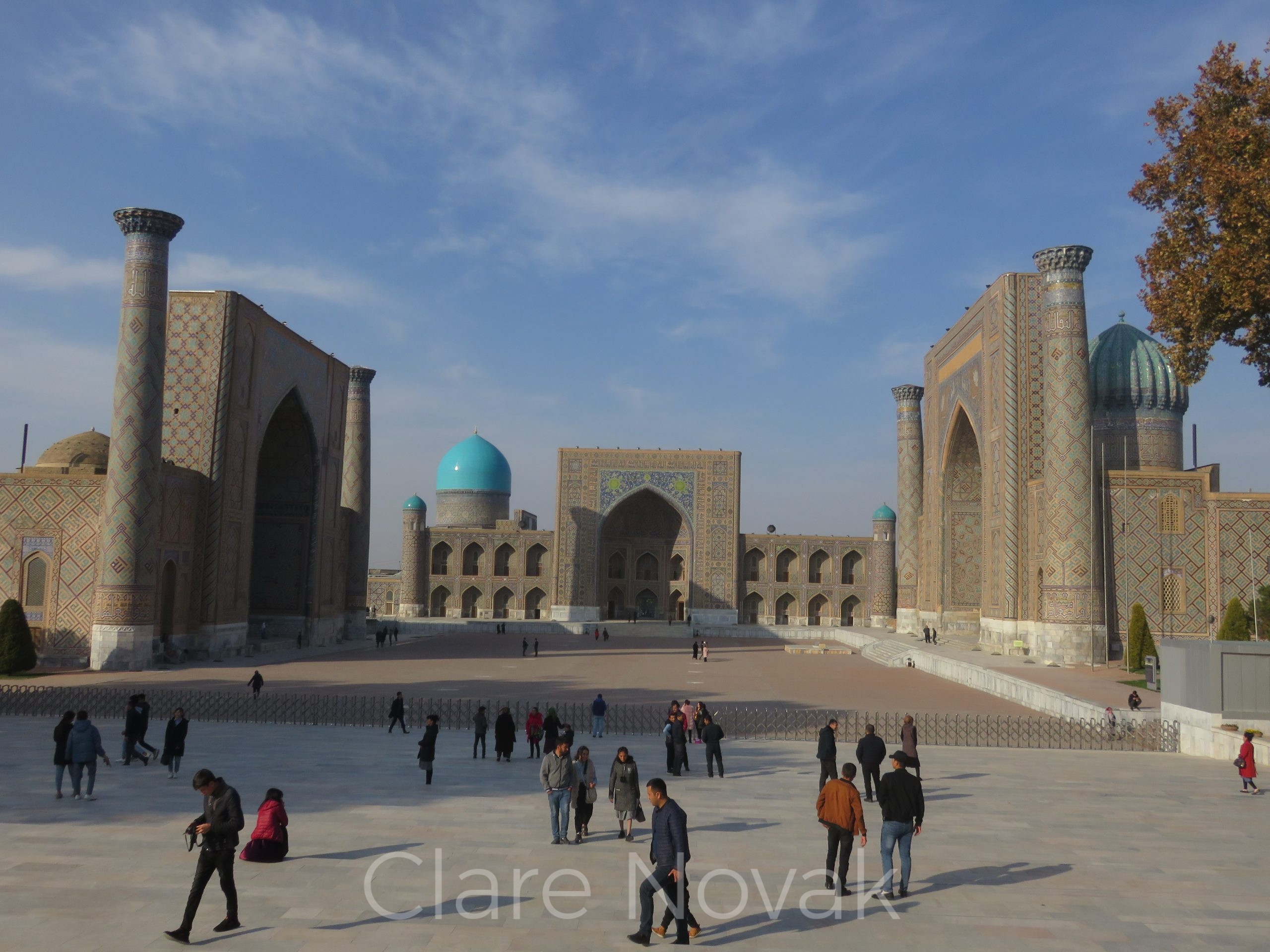 Brown, brown the color of exhausted dirt extended up into the sky, increasingly translucent until at the apex there was a small band of sky blue. The fall leaves were brown covered in brown dust without the glory of yellow or red. Grape arbors and cotton fields were extended brown. Even the white sheep were a pale shade of brown. Travelers on foot or camel crossed brown for weeks on end then came in sight of the brilliant blue tiles of Samarkand.  Breath-taking blue would trumpet the power of its ruling dynasty.

Samarkand is a silk road city, if not the silk road city. Trade goods and people traveled long and hard to reach its splendor. Like those ancient days, my day was much the same transition from unrelenting brown to glorious blue. Not only did Samarkand offer its blue Madrassas and Mausoleums, the sky itself cleared to a brilliant blue.

My driver spoke not a word of English but we managed. And of all the sights in Samarkand, he saved the best for last. Registan, a complex of three madrassas around a central courtyard, is stunning. The madrassas soar to meet the sky with blue on blue. Each madrassa the architectural mirror of the others yet subtly different. The grand entrances facing the courtyard were uniquely mosaiced. Sher-Dor Madrassa’s entrance is flanked by fierce tigers in mosaic over the arched door. Ulubeg’s facia is geometric blues and Tilya Kori has medallions like abstract suns.

That was not the only surprise. It was the first time I paid an entrance fee of 45,000 in any currency to enter an historic site. In Uzbek soms, that was a whopping four dollars and fifty cents. Happy to pay it along with the two to two fifty at each of the other sites.  Wandering in Registan in my own thoughts I felt the wonder, the majesty and yet understood, as a female, it did no good to wonder what it would have felt like to study here I would not have been allowed.

Equally stunning were the mausoleums of the dynasty who built Registan. The Amir Timur dynasty in the 14th century ruled a vast swath of the region for generations. The grandson, Mirza Ulug Beg was a scholar/ruler who studies the stars in an observatory of his own design. He was a detailed observer noting locations of start and their apparent movement in meticulous detail. He corresponded with European astronomical societies and his works were published by them as well as in his realm. Samarkand holds still a piece of the original meridian mark.

Traveling from Tashkent to Kokand, where our worksite was located, proved an interesting journey through mountain passes. As we left…