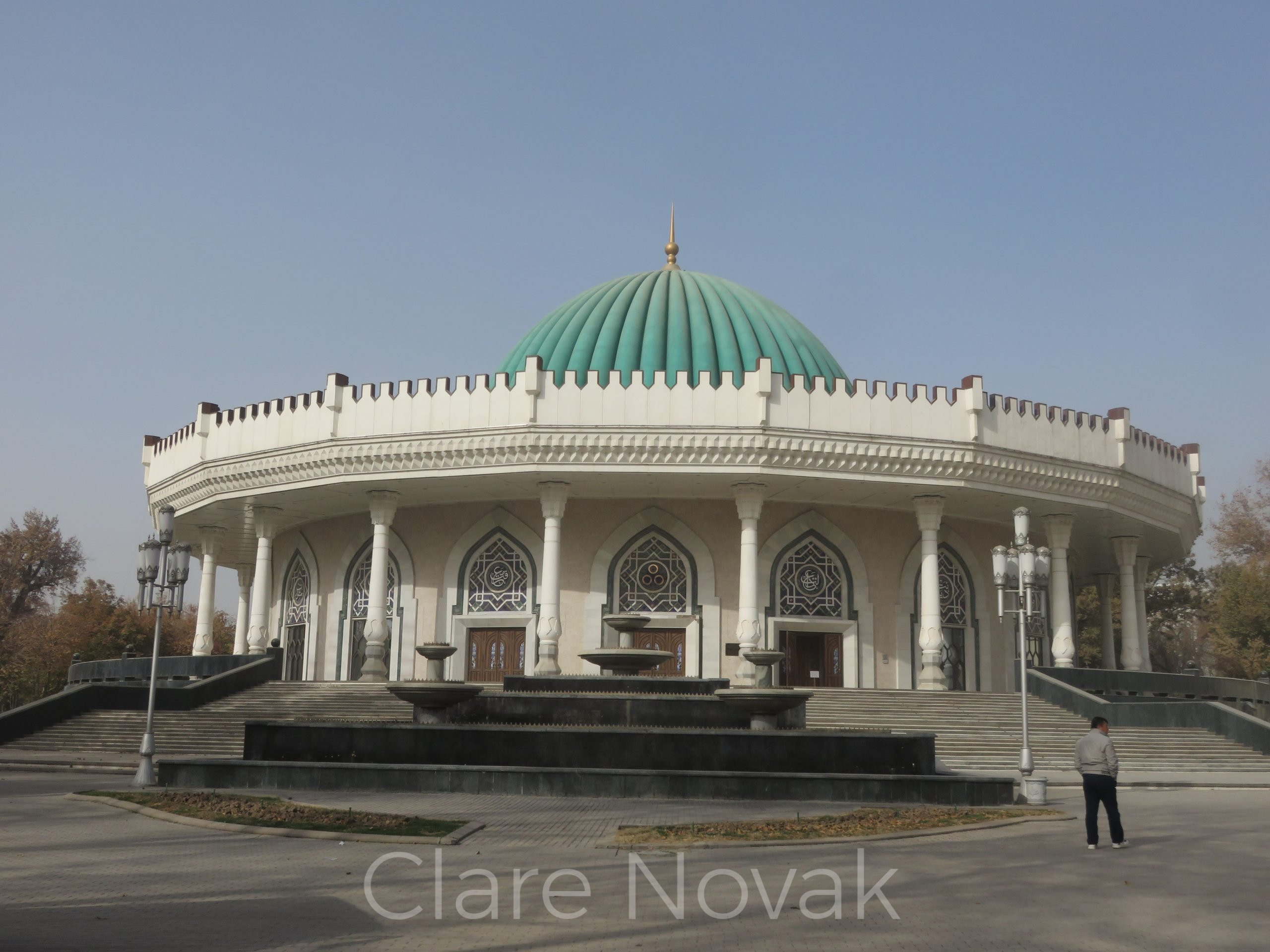 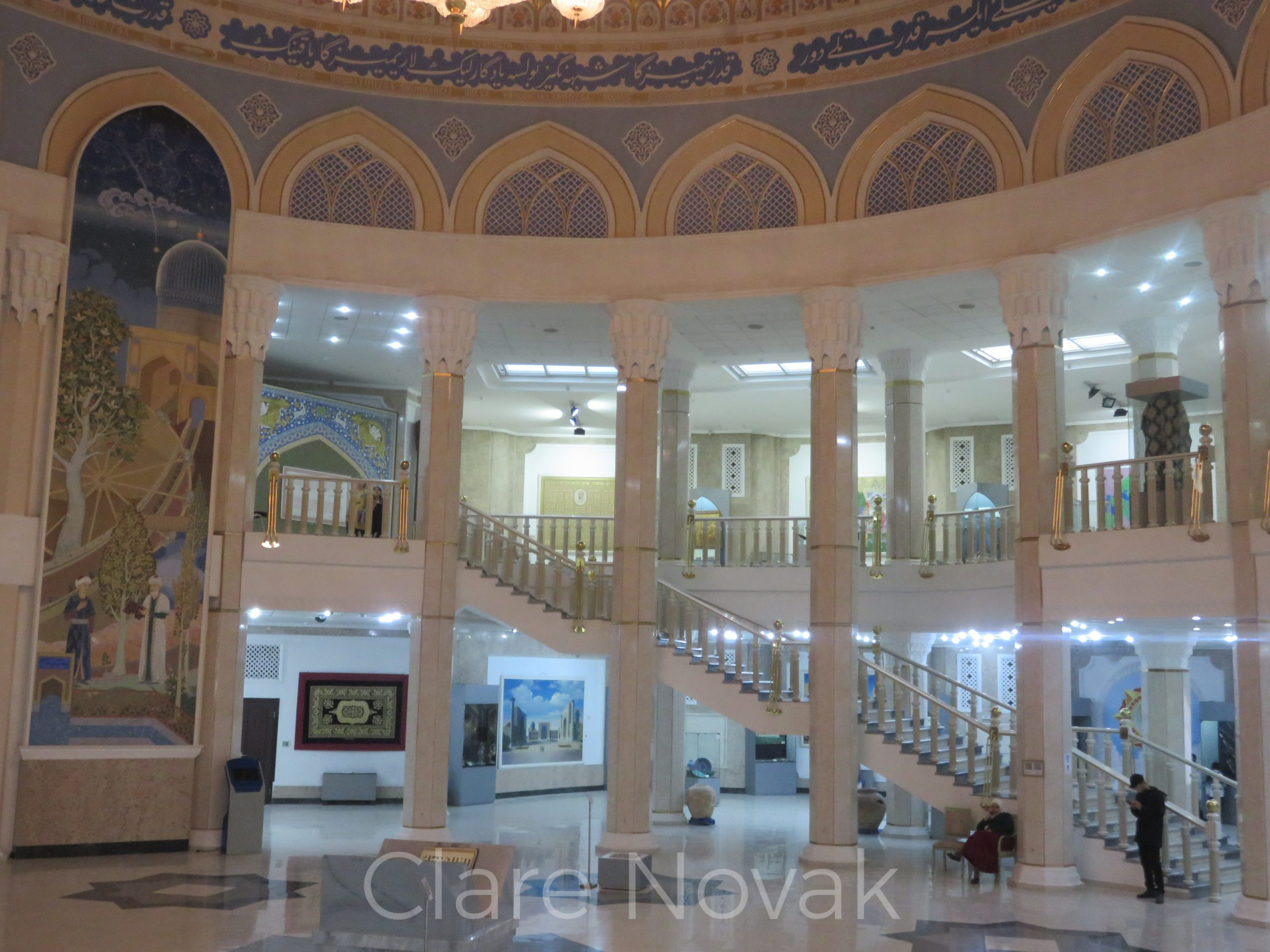 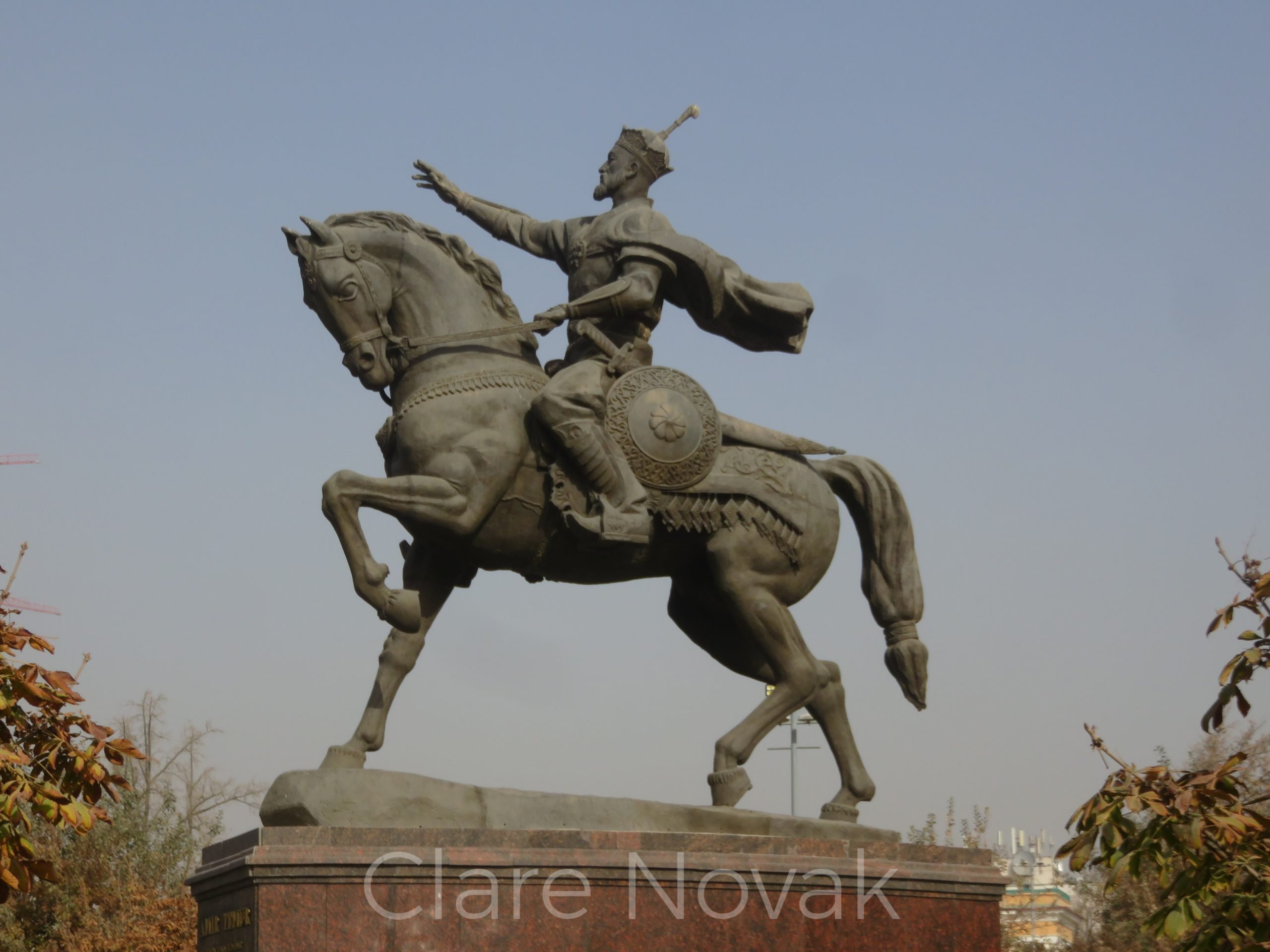 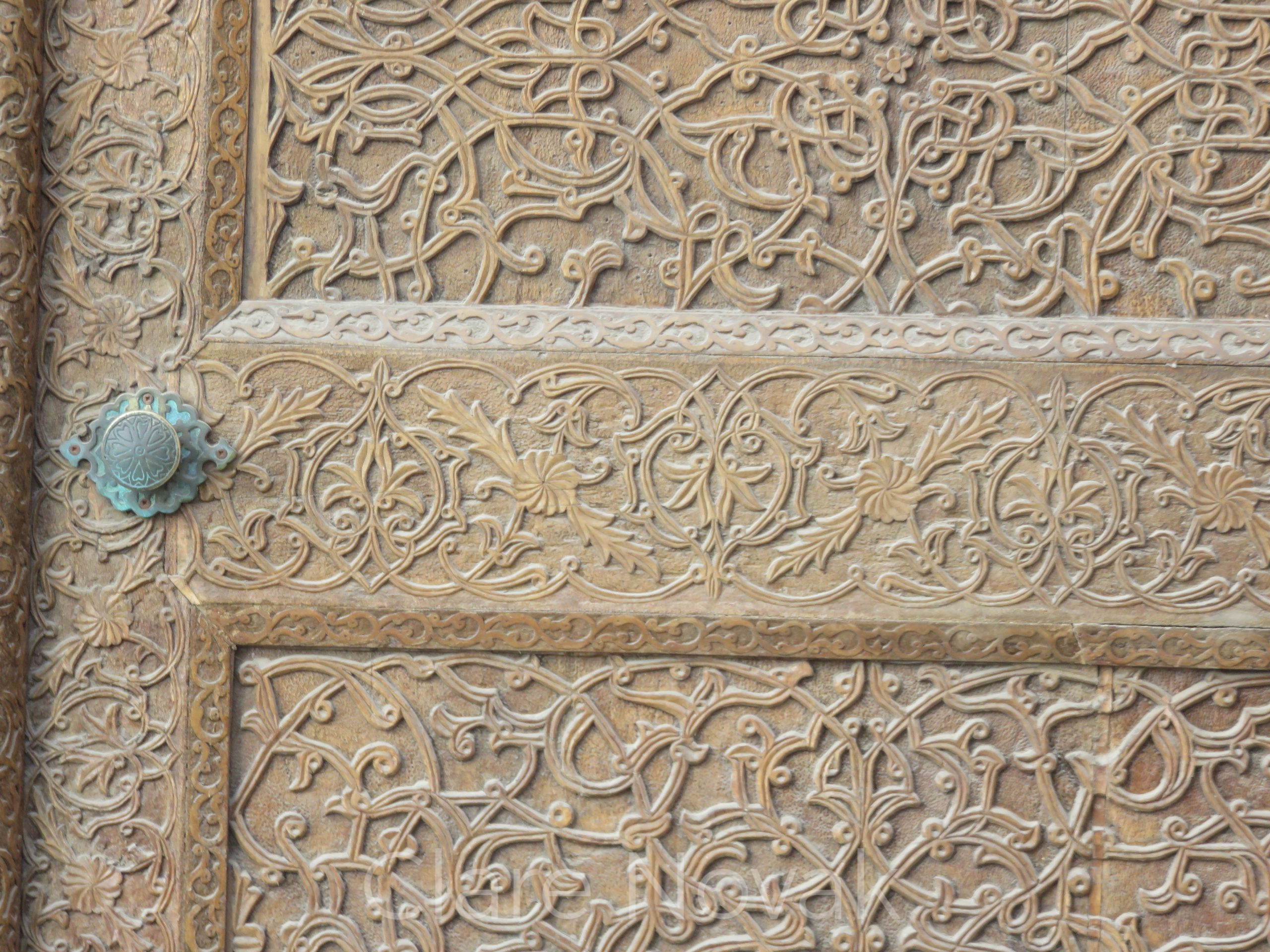 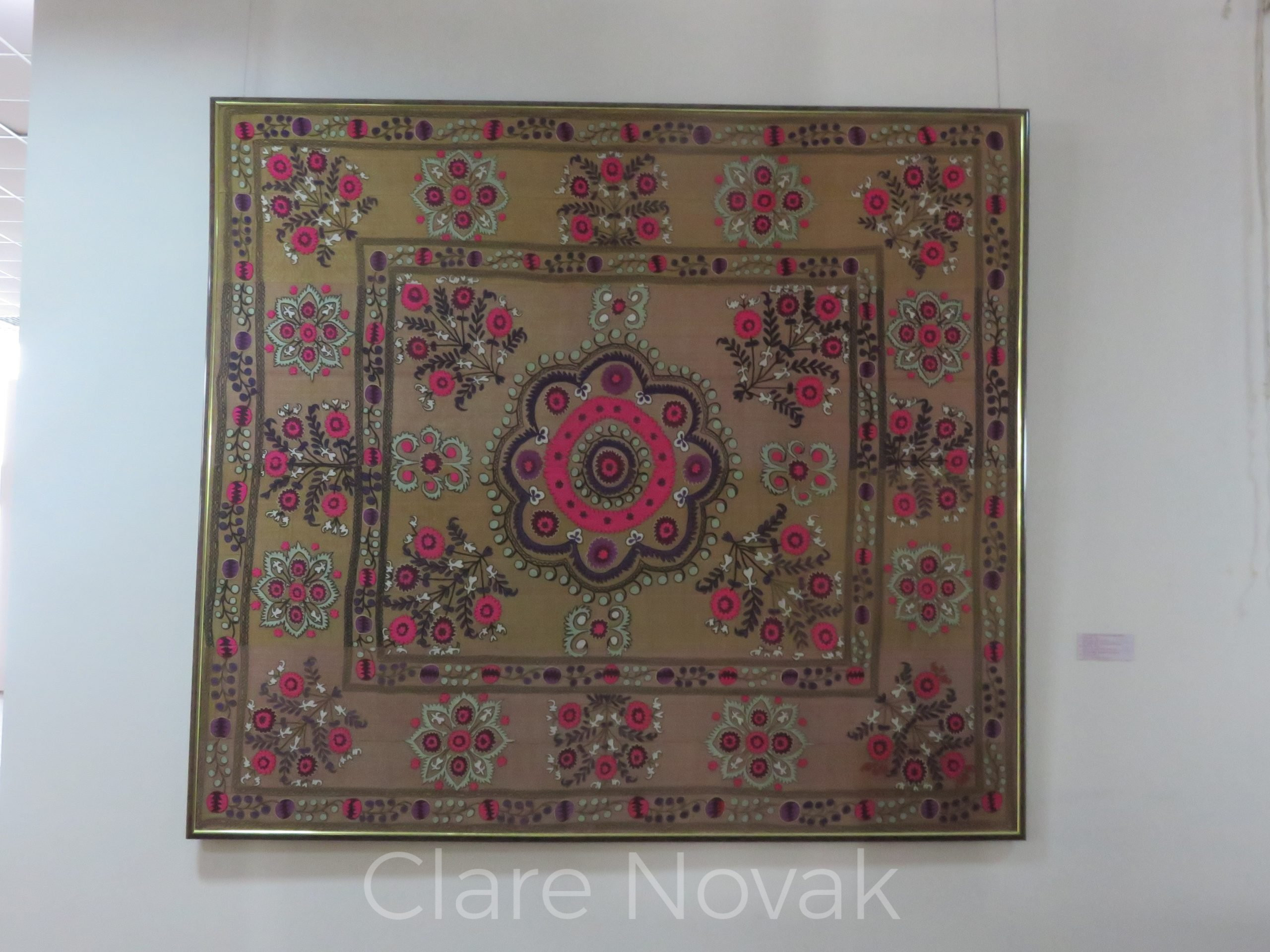 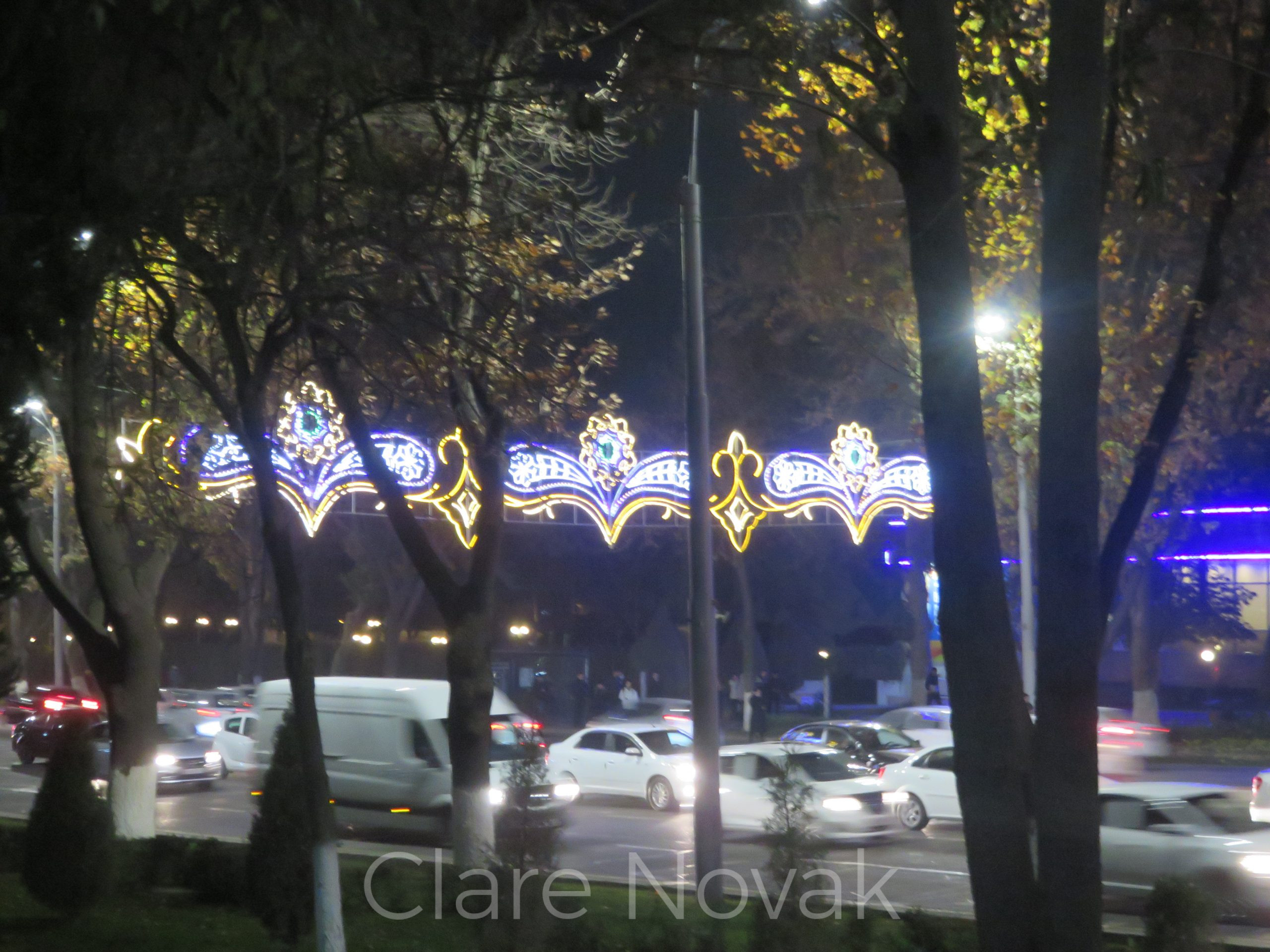 Having departed Philadelphia around 5 pm Friday, I arrived in Tashkent at 2 am on Sunday. Clearing customs and getting to the hotel meant checking in at 4 am. Woke up at about 8:30 am local time and decided to stay awake and force adjust to local time.  After a leisurely breakfast with plenty of coffee, I set out to see the local area. Fortunately, it was a lovely, sunny morning.

On my walk about, was the nearby Amir Timur Museum, with lovely grounds near the square dedicated to him. The Timur Museum is a beautiful building with, sadly, mostly reproductions. On the reproductions were notes stating which European or Asian museum houses the original. Conquerors are not noted for respecting local history. What this museum does well though is lay out the contributions of Amir Timur and his family legacy of both conquest and learning.

The Art Museum is in a dreadful building but had more original artifacts, textiles and woodwork. Individual rooms were each fully dedicated to a local craft. Intricately carved doors filled a room. Rug-size, hand-embroidered table linens in bright and beautiful colors graced another. Velvet robes with gold-work embroidery were meant to impress. The display case full of men’s caps each embroidered in a regional style were delightful. Unfortunately, photos were not allowed in many of the rooms displaying fabric work. There were rooms with oil paintings, some quite lovely. However, the European collection was understandably not top tier; top tier work remains in Europe.

After hours of standing and walking, I found Tashkent a basically clean, modern city scrubbed of personality, at least within walking distance of the hotel. On later days, traveling in the city after dark, I was charmed by the street lights. In different sections of the city, the light standards are decorated with color displays, much like Christmas lights but of many themes. One area had flowers, the government district, banners in the colors of the Uzbek flag, and near my hotel, a bold geometric.

A Second Day in Paradise

May 25, 2013 Cambodia is peace. The people are sweet and helpful. The tuck tuck driver doesn’t mind if you…

Gifts Of Beauty and Utility

Today we did four temples, one of which we were able to climb for a great view of the surrounding…

Ah, Kuwait, sounds exotic and no doubt subject to all the fear and envy people who’ve never traveled for business…