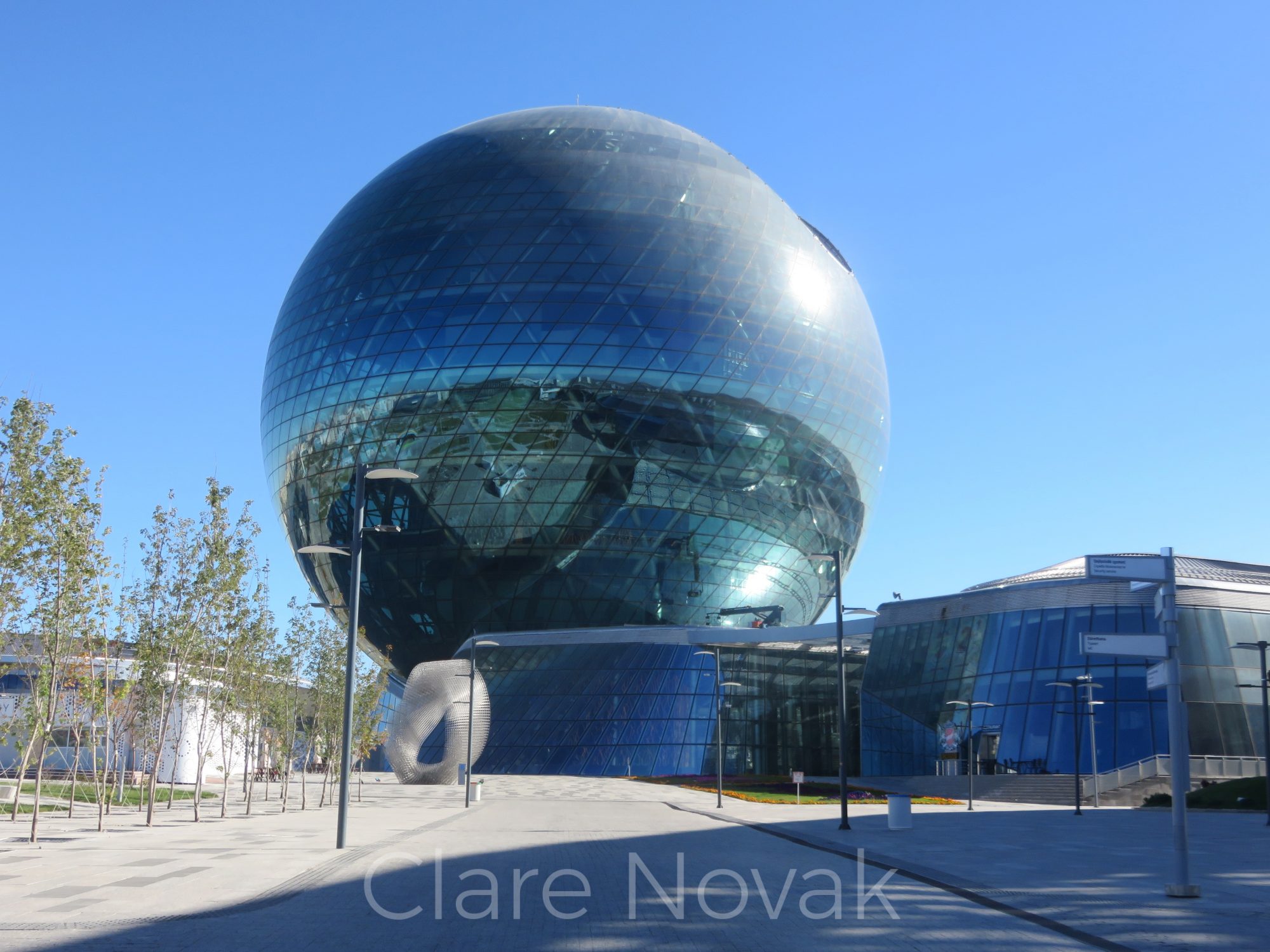 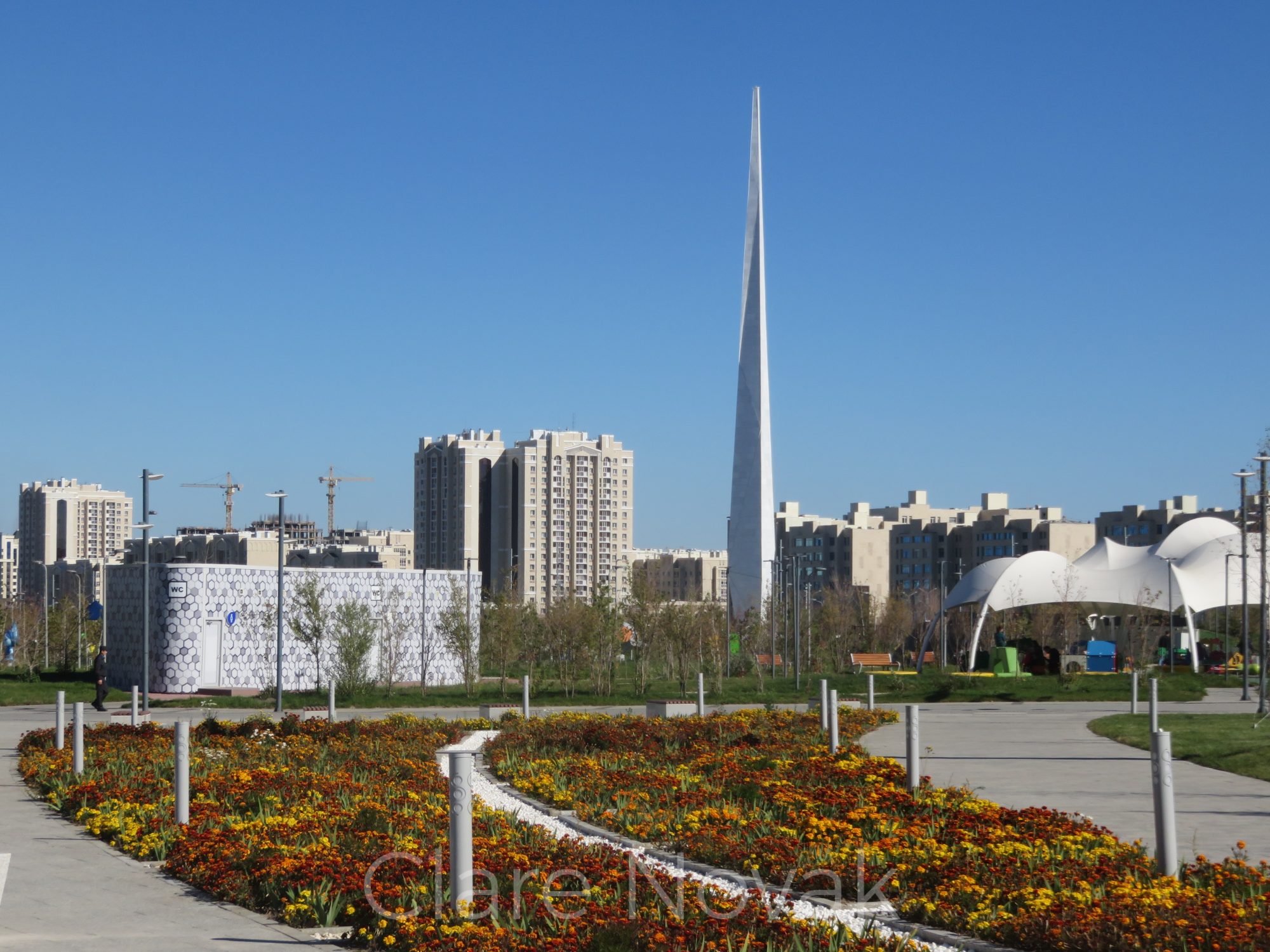 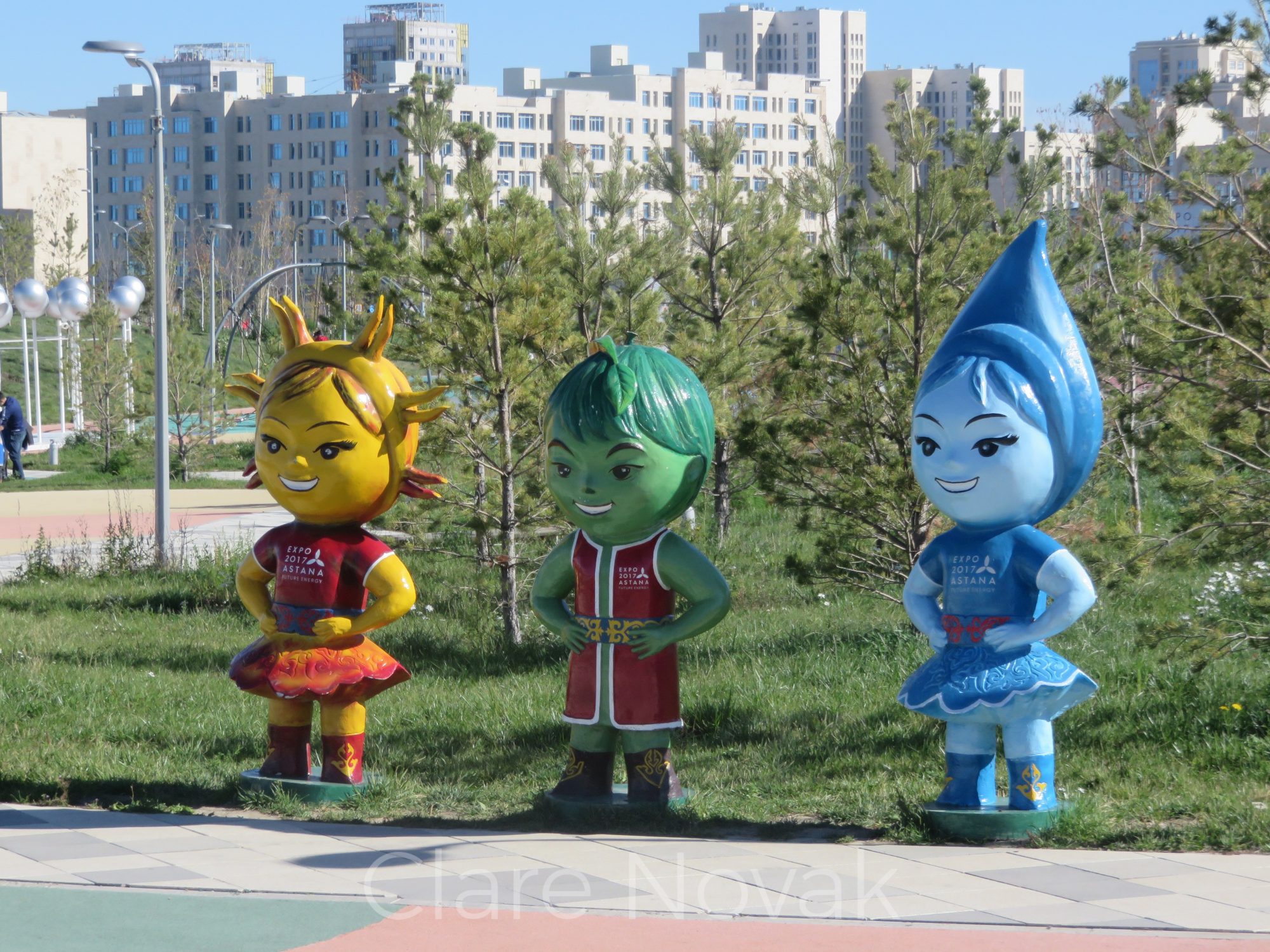 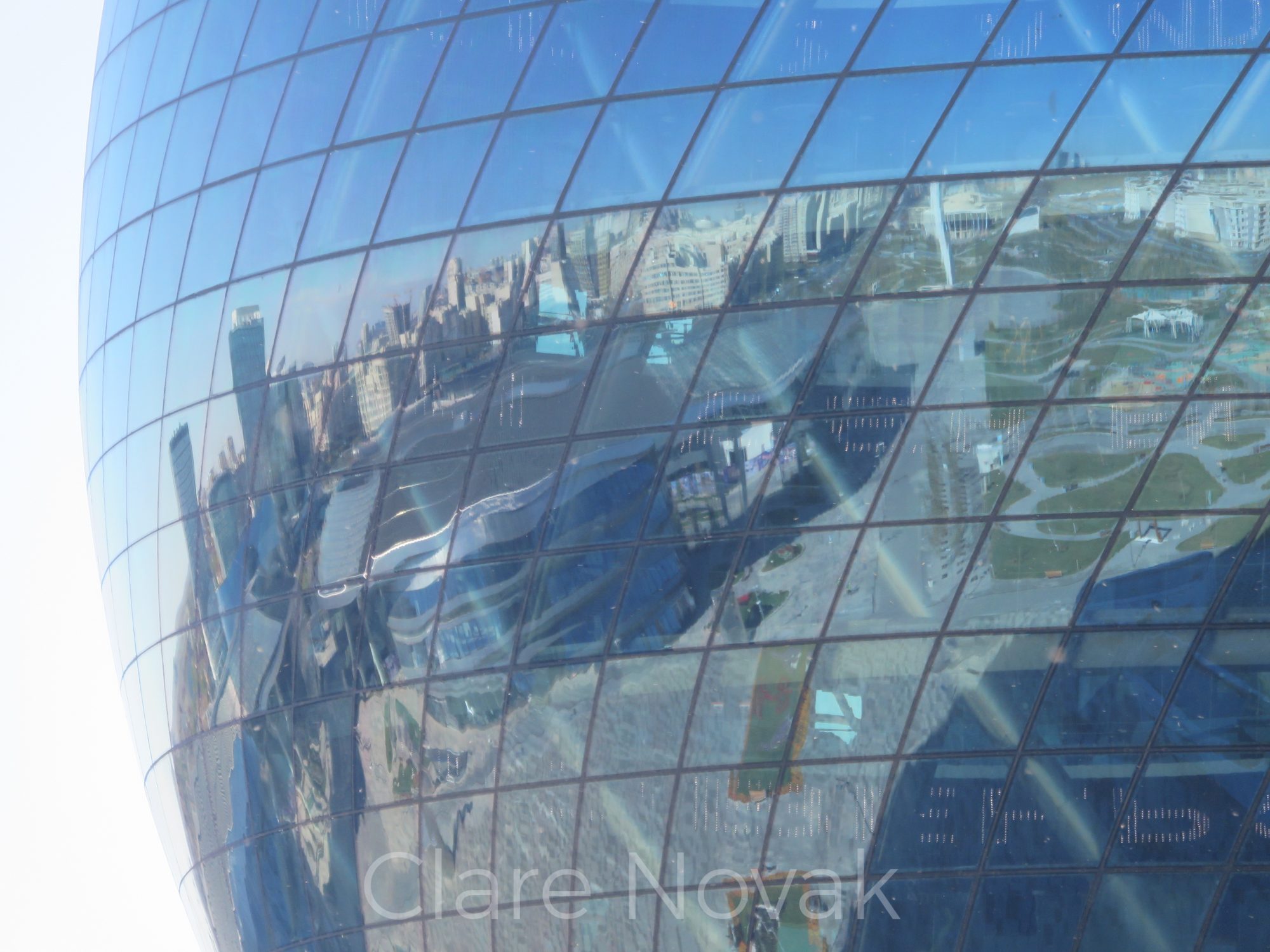 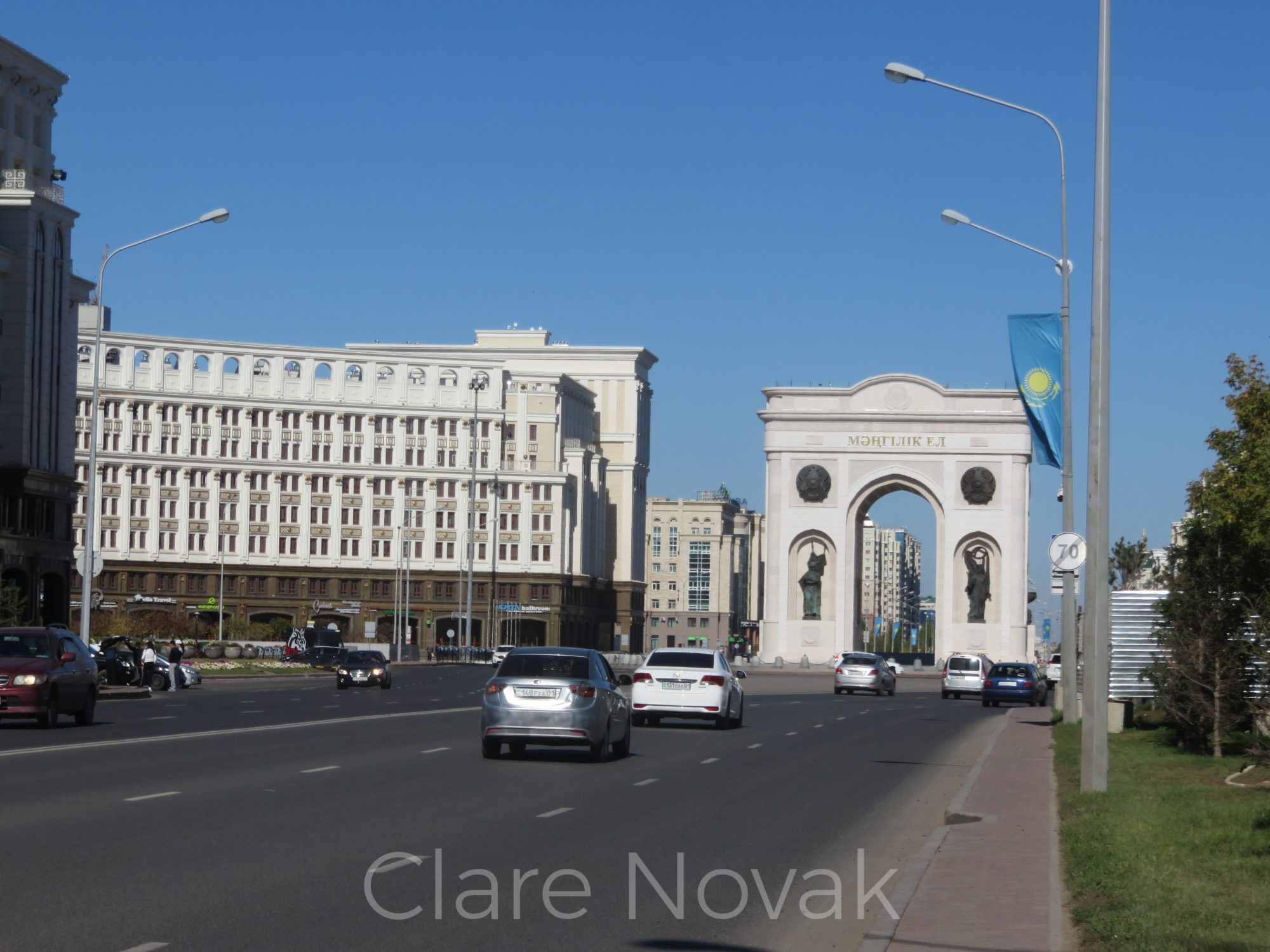 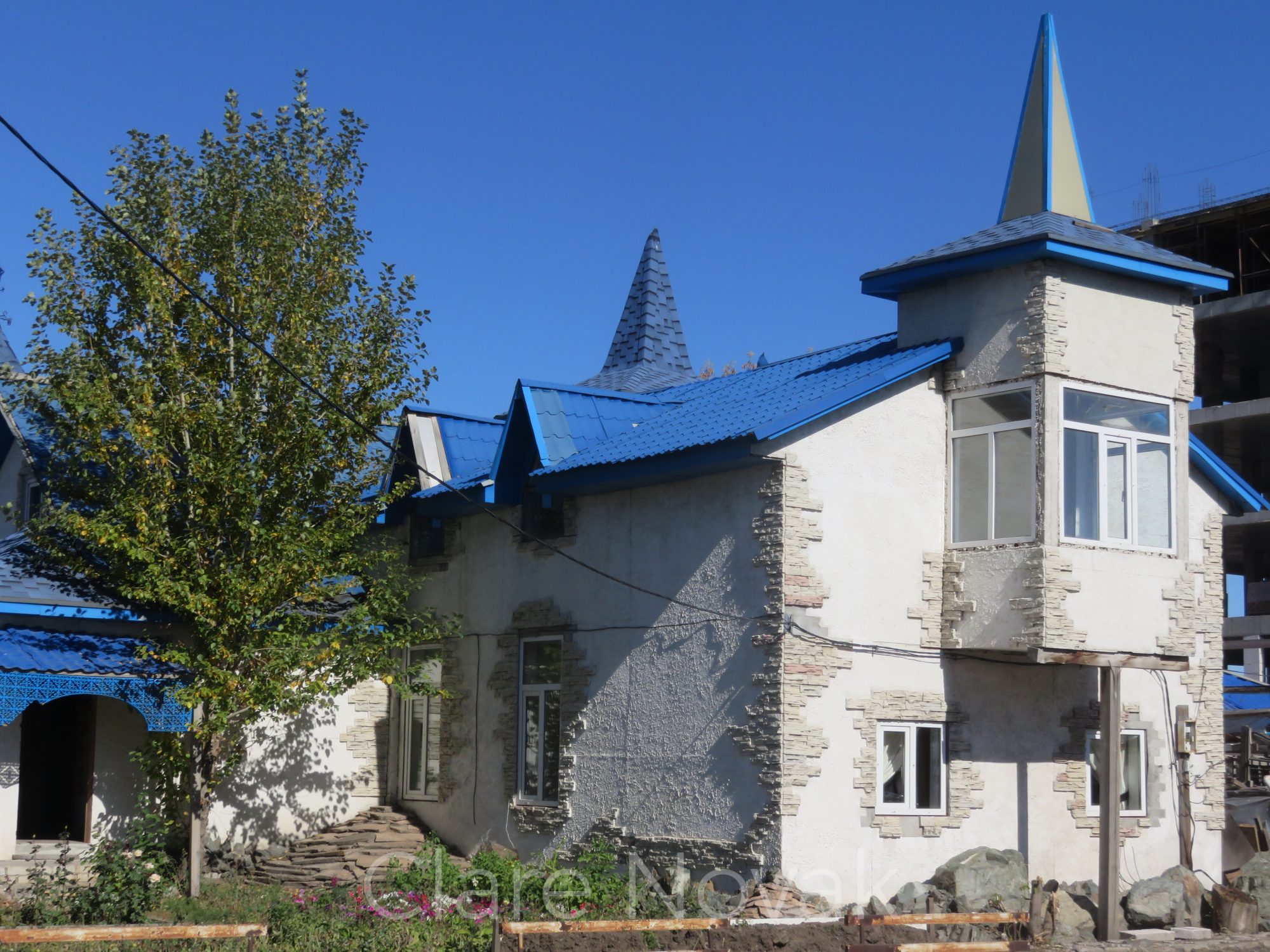 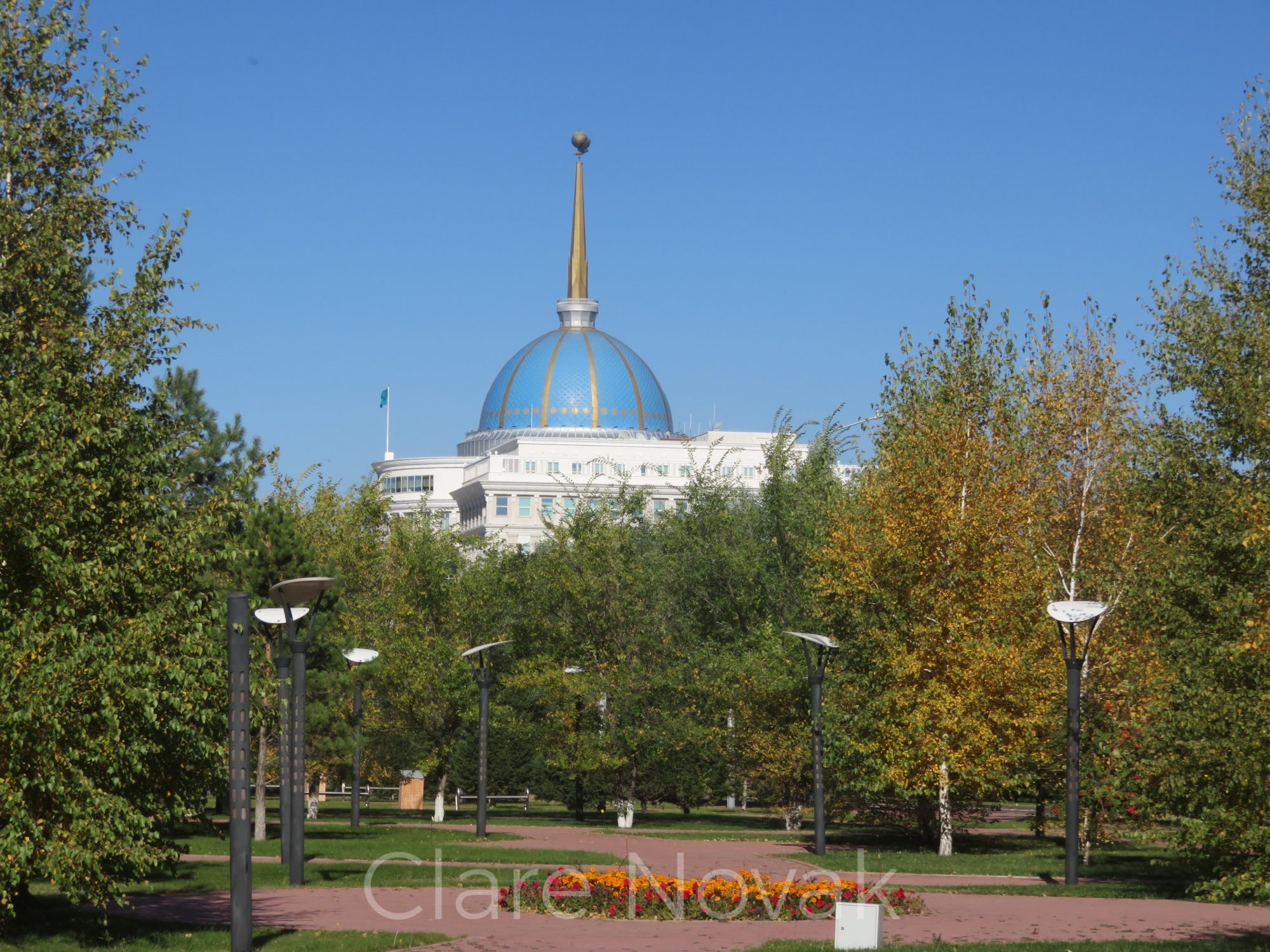 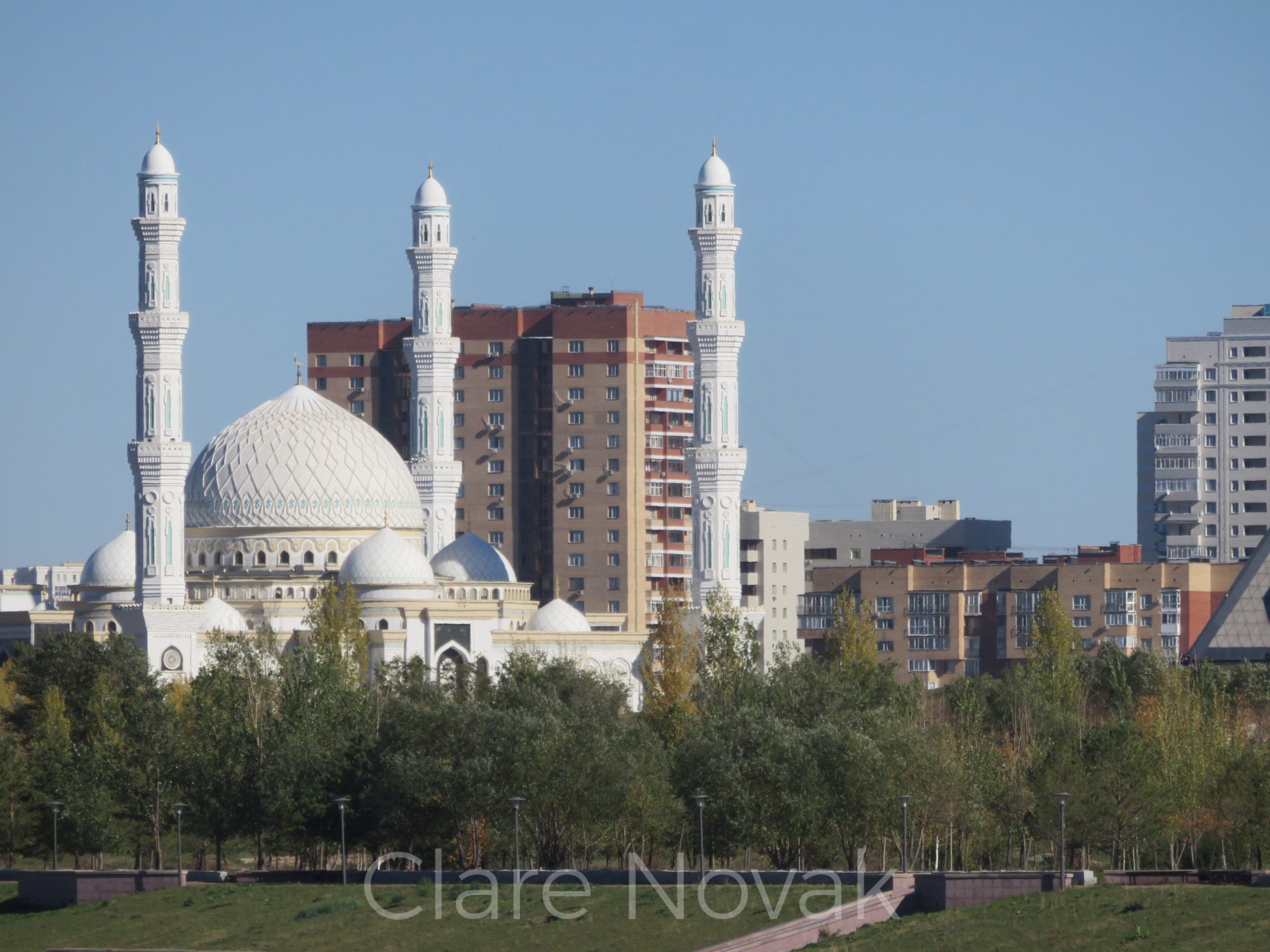 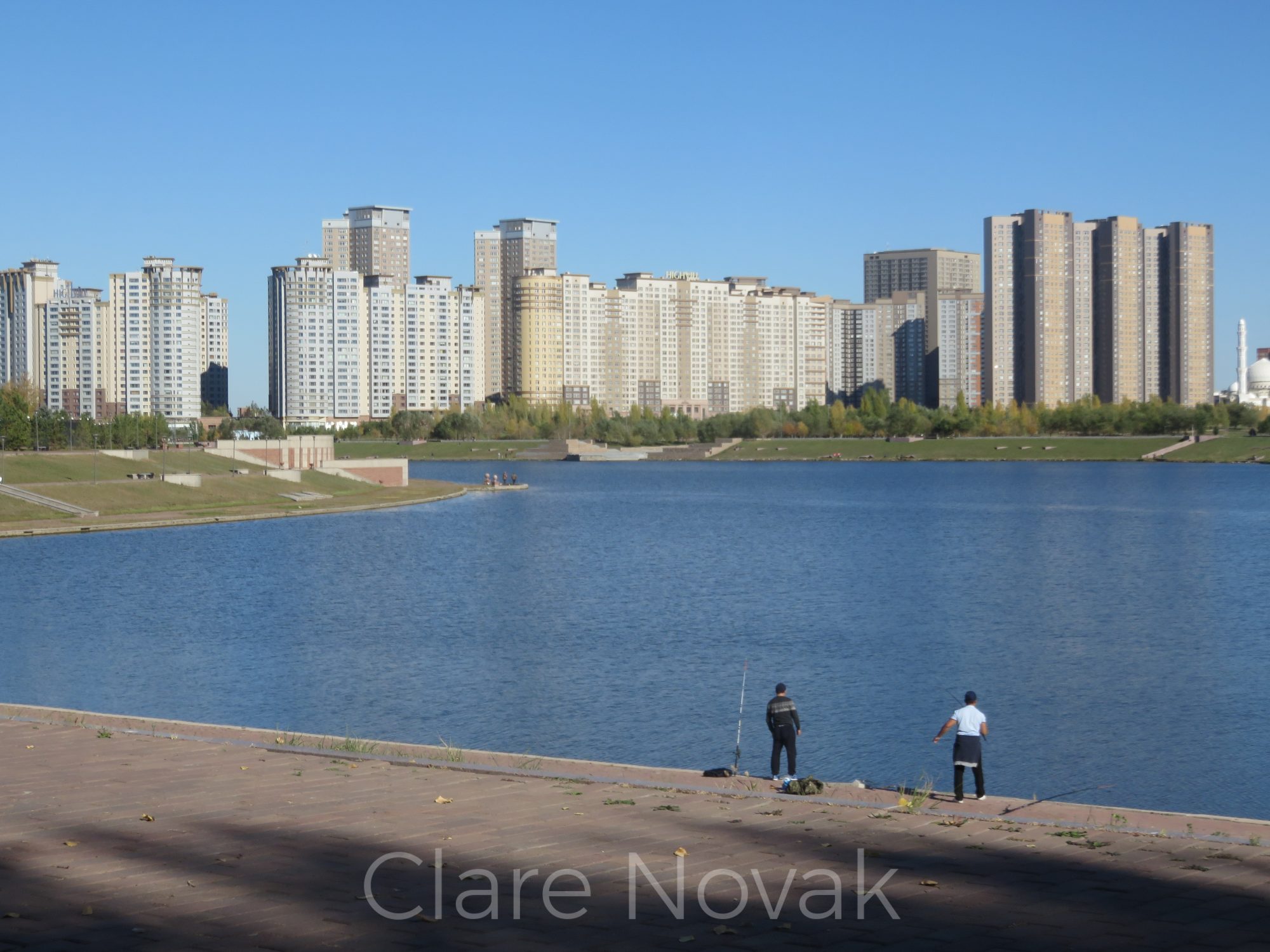 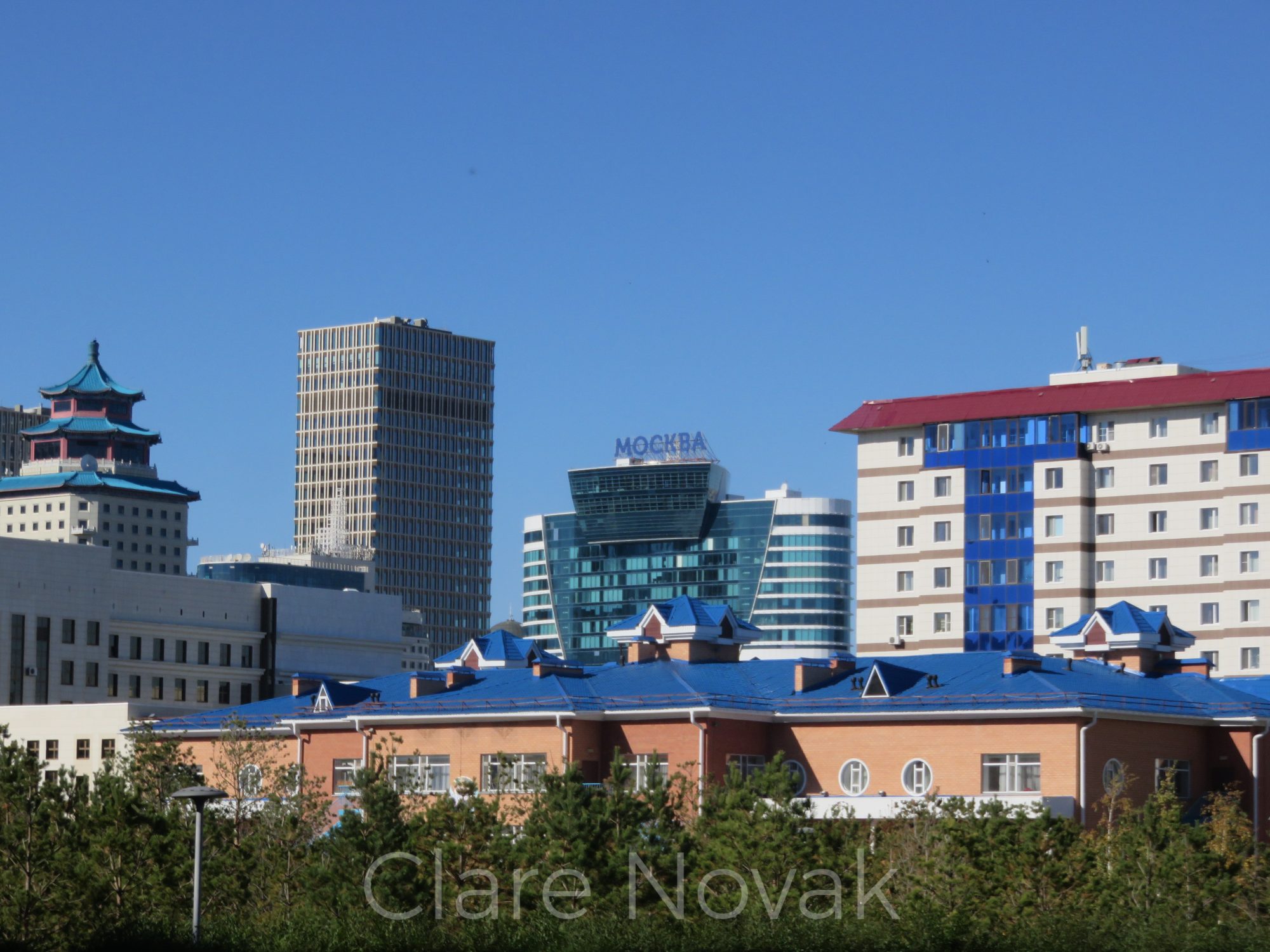 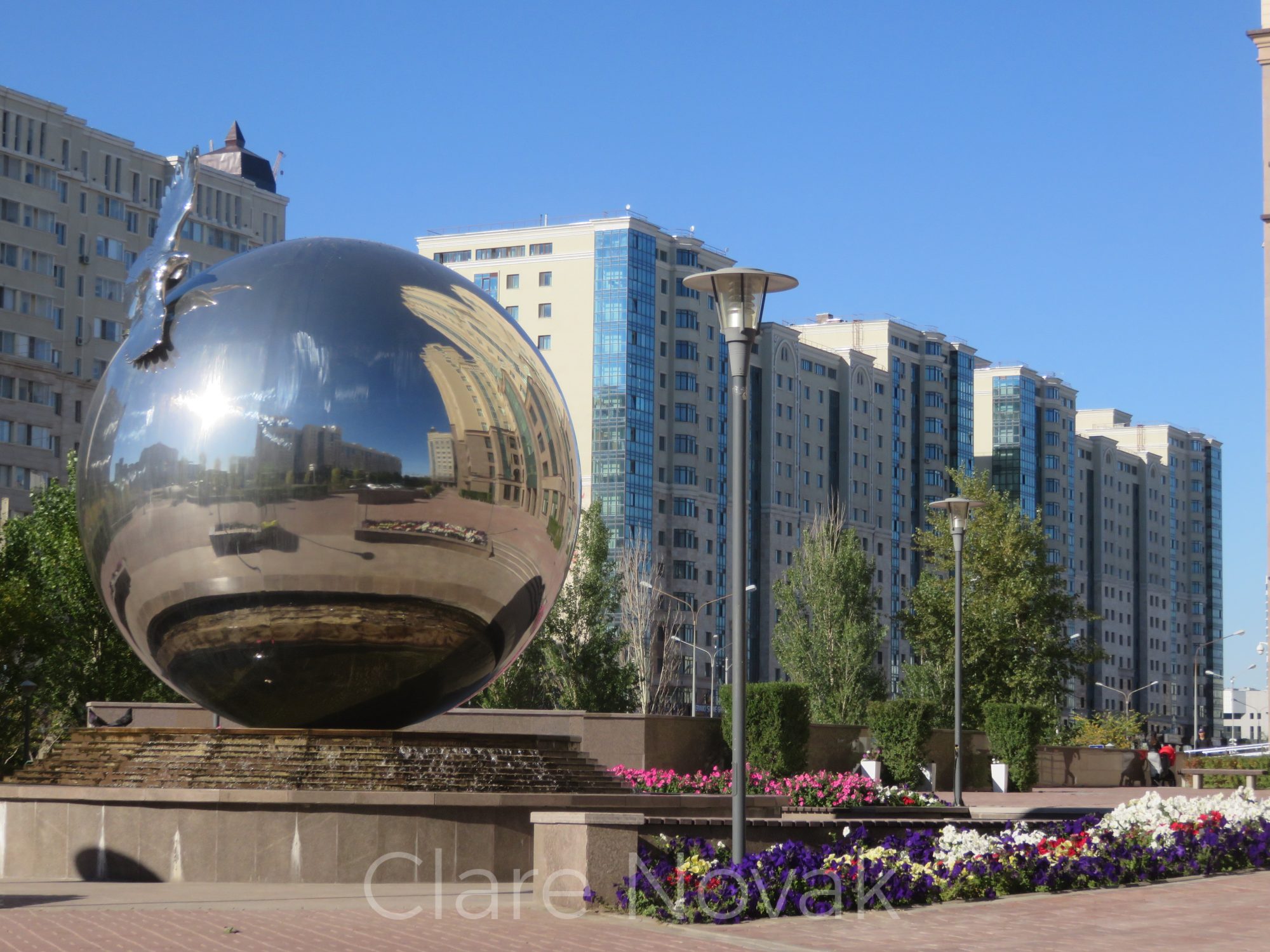 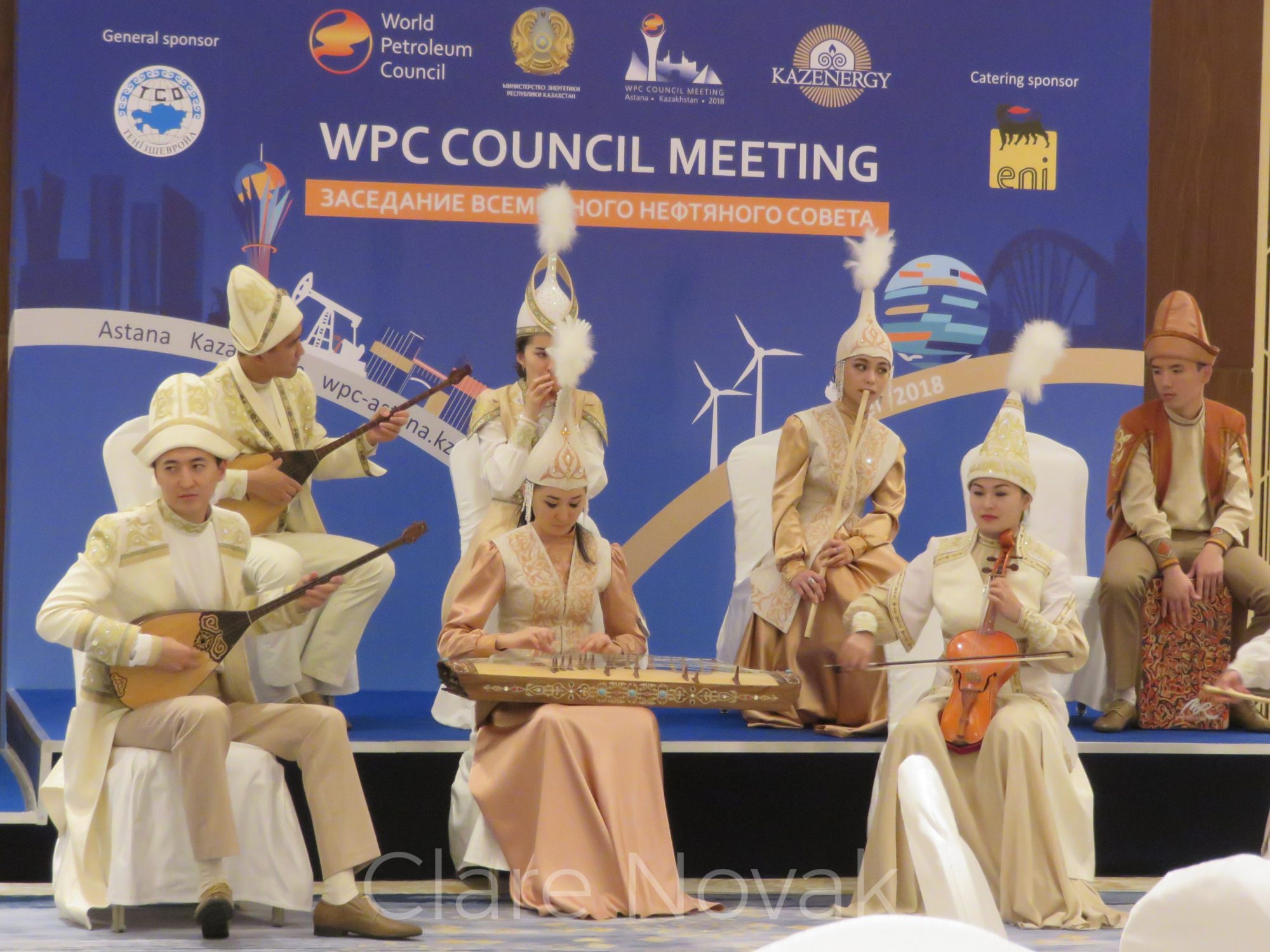 That just happened. A plane ticket arrived in my email Thursday morning and I landed in 32 degree Astana, Kazakhstan, 11 pm local time with a hotel reservation, a dead laptop and broken readers. It was well after that I finally dropped off to sleep.

Even before eating breakfast, I figured out how to print my presentation, get my conference badge and conversed with a Texan. By then it was past 10 am local time and the shopping mall next door to the hotel was open. Not wanting the giant hotel buffet, I went to a mall coffee shop for a perfectly respectable spinach omelet and cup of coffee for a fraction of hotel costs.

Searched for a store to buy readers, but no luck. The central court of the mall hosted a number of local designers. After looking through and finding a few interesting things I declined to buy as the outfits would have felt too “costumey” back home. Otherwise, it was just a mall with the same tired selection of stores.

Sunshine propelled me to commandeer a tourist map and walk, and walk, and walk…. Astana is a planned city built to the scale of vehicles rather than feet. The city is meticulously clean, so clean I started looking for trash and found only a gum wrapper. Colorful flowers framed the boulevards and for all of that, I found the glass modernity lacking a soul.

Looking to escape, I headed for the river walk and happened upon a curious building. It was small and appeared to be a recreation of some older style, perhaps the old way of Kazakhstan. I had no way of knowing. The Riverwalk was lovely in the 70-degree sun. Parents walked strollers or rode bikes with their kids. I sat on a bench for a while and watched the fishermen. Tired but glad to have been out, I returned to my room to practice my presentation a few more times.

Since the mall had a number of restaurants, I went to the Black Duck. Under the supposition that when a restaurant is named after a dish, it’s best to order that dish. The duck breast in dark cherry sauce was indeed the best smoked duck I’d ever eaten. This being only the second meal of the day, I indulged in dessert and coffee. The recommended dessert was a light pastry made of ground nuts rolled with a light whipped cream with whole raspberries.

The gender program was in the afternoon. The introductions and short speeches done, mine included, the presentations by the Central Asian women on conditions in their countries was fascinating to me. Of all, it seemed Tajik women suffered the most. While Kazakhstan is a rather free society, Tajikistan is suffering under Islamists. Few women in Kazakhstan cover their hair and none wore abayas. Alcohol is openly available. Even better, women enjoy equal access to education and jobs.

Rumi, a different mall restaurant, was local cuisine. Lagman proved to be spicy, beef vegetable soup with noodles, if by noodles you mean spaghetti length egg noodles with three times the diameter. The broth was red, most likely from chili oil, and less than in a traditional soup. I pronounce it good.

The student competition presentations were thoroughly enjoyable and inspiring. Eight university teams were competing for a grant to take their work from beta stage to production. Each project focused on improving a component of the energy field. They did everything from developing algorithms to improve smart metering to wave energy generation.

Lunch was when the networking evolved and we had a mix of nationalities at our table. The Kazakh women insisted we try the local delicacy appetizers. Never wanting to disappoint the host, I tasted before asking. Sometimes it’s better not to know. The one item I recognized as beef tongue and I’m ok with that. The other was a dark red/brown slice of sausage. It was rather dry with a beefish flavor. “Ish” is key as I later learned it was horse. Horse is common in Kazakhstan.

The afternoon presentations were highly technical and so by the evening’s reception, everyone was ready to party. It was great fun to talk with people. Goran, a professor from Serbia, was fun as were the Russian ladies. We had such fun that the Russians invited us to stay for their reception which followed the main reception. They had a cake to celebrate 60 years of the Russian Petroleum Council and, of course, vodka toasts.

By the time it ended, I wondered if it was even worth it to try to sleep, as I needed to leave for the airport at 2 am. I attempted to nap but found that a vain wish. Ultimately, I alternated sleeping with movies in between both on the flight from Astana to Frankfurt and Frankfurt to Philly. Landed in Philly at 4 pm and drove directly to King of Prussia. At the Microsoft store, I handed them my apparently dead laptop and, of course, it booted right up. Computers are evil.

Cambodia and Thailand were two wonderful vacations taken during the years I worked in Pakistan. The posts are largely as…