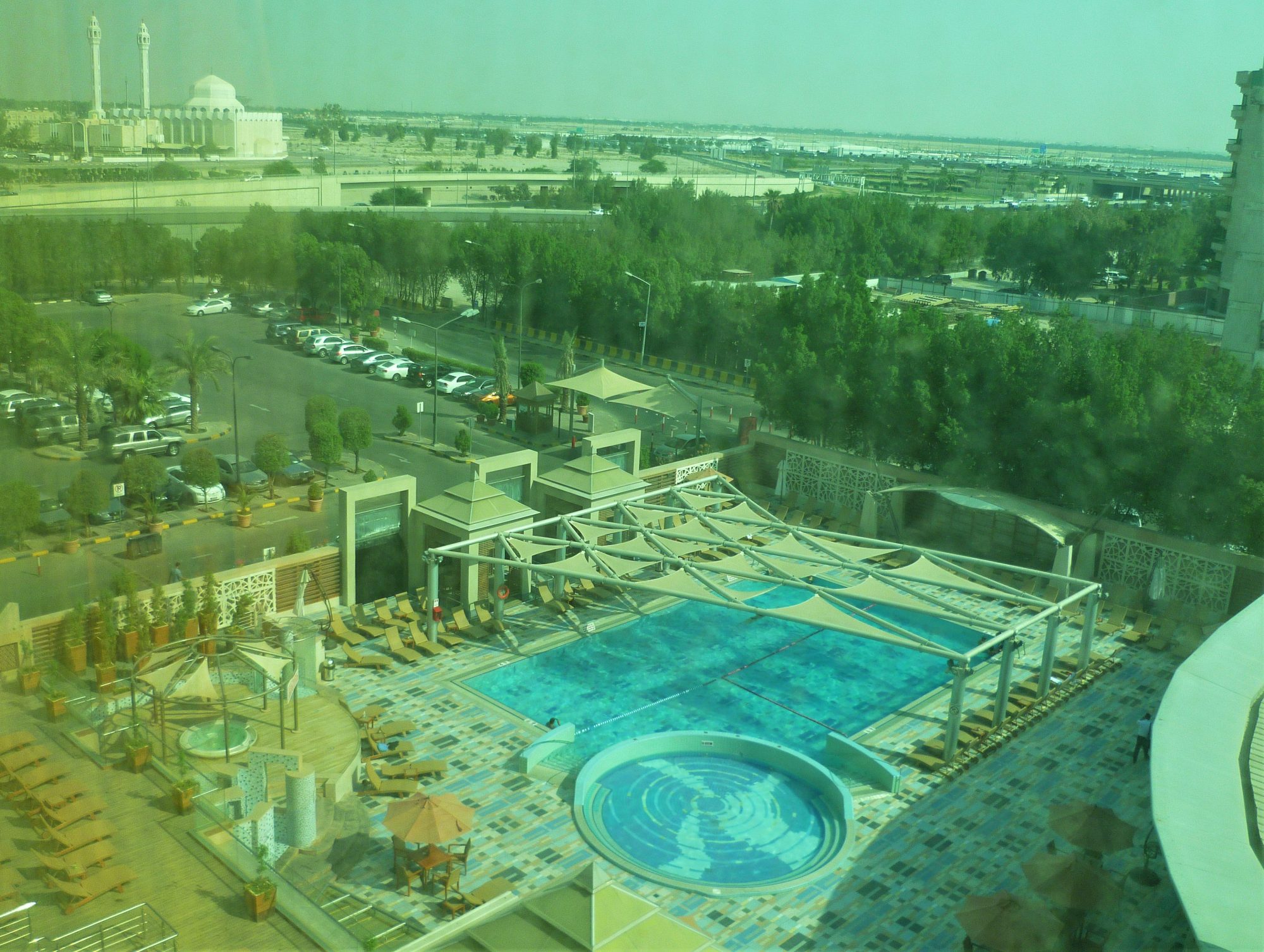 Ah, Kuwait, sounds exotic and no doubt subject to all the fear and envy people who’ve never traveled for business can muster. Real world, it’s a business trip preceded and followed by really long flights. Although, I was delighted to find that non-stop long flights leave me less exhausted on arrival than ones with dawn to noon layovers.

Kuwaiti traffic has it all over the Egyptians. Kuwaitis have and obey traffic signals, drive in lanes, and don’t throw trash all over. Things are clean and the apartment blocks look built to last. Their watermelon is a big disappointment though. Was looking forward to Egypt quality and got late season American.

The Crown Plaza is very nice and has its humorous touches. The Rib Eye, “a steak house in the Texas Mountain tradition (?!)” sports wait staff wearing ersatz cowboy hats and boots with jeans and blue oxford shirts. The waitresses are primarily Asian girls, so I’m sure the get up is some sheikh’s wet dream.

I will not see Kuwait while I’m here, just the hotel and training center. Was going to venture to the National Museum but it would have cost about $40 just to get there. Other than the Louve or the Vatican, I can’t imagine a museum good enough to rate that kind of money. Cost is partly a lousy exchange rate of around 3 USD to the Dinar. Ouch! Makes Euros seem like a bargain.

The Kuwait Times provided the laugh of the day with a front-page color picture of a group of bikers called The Hogs of Lebanon who just completed a ride of the Middle East. I’ll pause while you get you head around that one. Harley club not the first thing that comes to mind when I say “Middle East?”

I’ve felt bad about Kuwait for some time. Having written so much and so enthusiastically about Egypt for so long, I felt I was giving Kuwait short shrift. Time for a change. The Tareq Ragab Museums are well worth writing about. The first is new and dedicated to Islamic calligraphy with works of graceful, intricate beauty. Most of the collection consists of illuminated books. It is worth the effort to look closely, very, very closely. For only then do the flowers smaller than your own pupil startle with bright color and crisp lines. Blue borders have gold stars and the horse is neither painted nor drawn, but written with hundreds of exquisitely small lines of text.

The few modern pieces pop out from the background of antiquities. Three are wood in a technique I cannot name. The calligraphic letters are in part inlaid and in part sculpted above the background. The colors and contours, from a distance, give the appearance of a gathering storm. I wish there had been some sign to tell me the meaning of the words.

The second museum managed to display so many items in such a small space that it was impossible to take it all in. A return trip will be in order. Jewelry, textiles, weapons, coins, musical instruments, pottery, glass, furniture, and more manuscripts. Jewelry from the Middle East, India, and Eastern Europe filled the cases. For gold jewelry go to Mughal India, silver with cloisonné it’s best to be the Sultan of Bukhara.

In a display of a beautifully carved and mother of pearl inlaid child’s cradle, the role of the child was incongruously played by a Cabbage Patch doll. Scattered about the floor in each room were pieces of antique furniture with not so much as a suggestion that it would be best to not sit in them. Likewise, the 3-foot tall pair of silver horses and the mother of pearl lions were out in the open where one could pat them on the head. The smiling lions very much invited one to do so.

Where I had once been impressed by the single jade plate in the Nicholas and Alexandra exhibit, I can now yawn at it, having seen a pair of jade water tumblers, covered teacups and the jade water ewers to fill them. As for the weapons, all I can say is that if one must fall on one’s dagger in the Middle East, it will at least have a gold hilt with a gem the size of a robin’s egg.

And to be fair because Egypt took its fair share of teasing, let me point out this on the bottom of the Kuwaiti visa: “To Obtain a work residency requires fetching a valid criminal record.”

So, if I don’t have a criminal record, I can’t get work there?

Gifts Of Beauty and Utility

Today we did four temples, one of which we were able to climb for a great view of the surrounding…