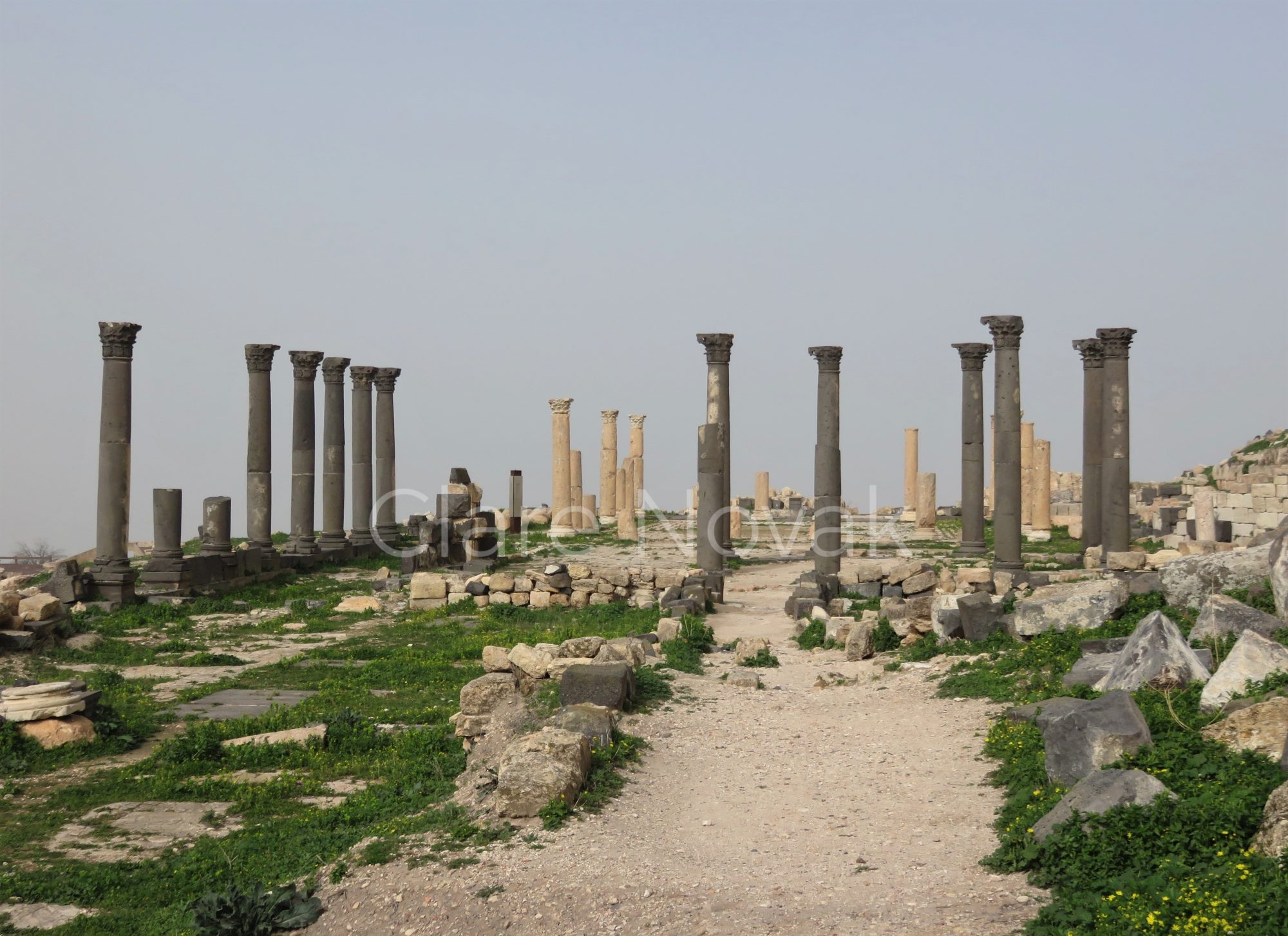 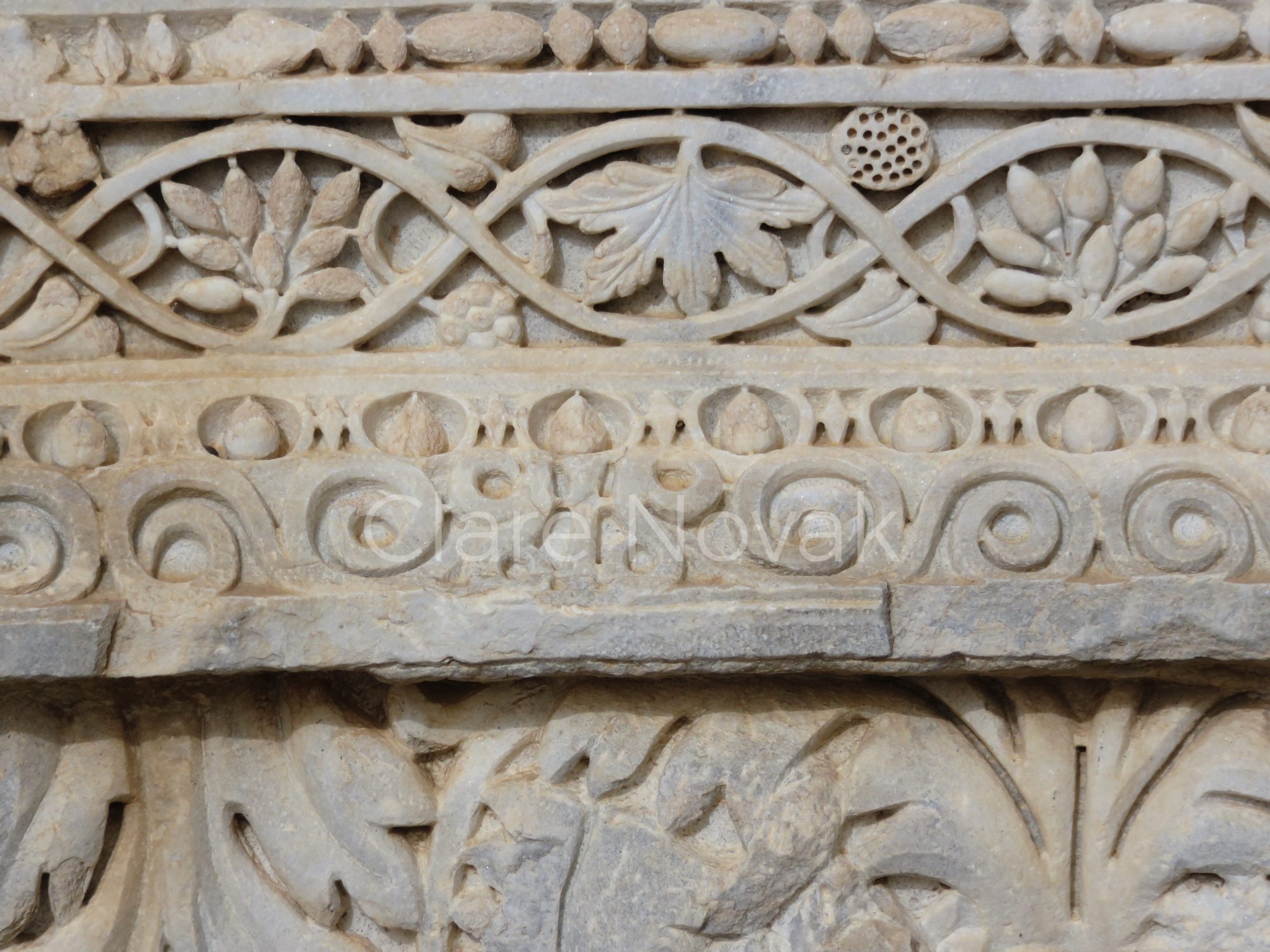 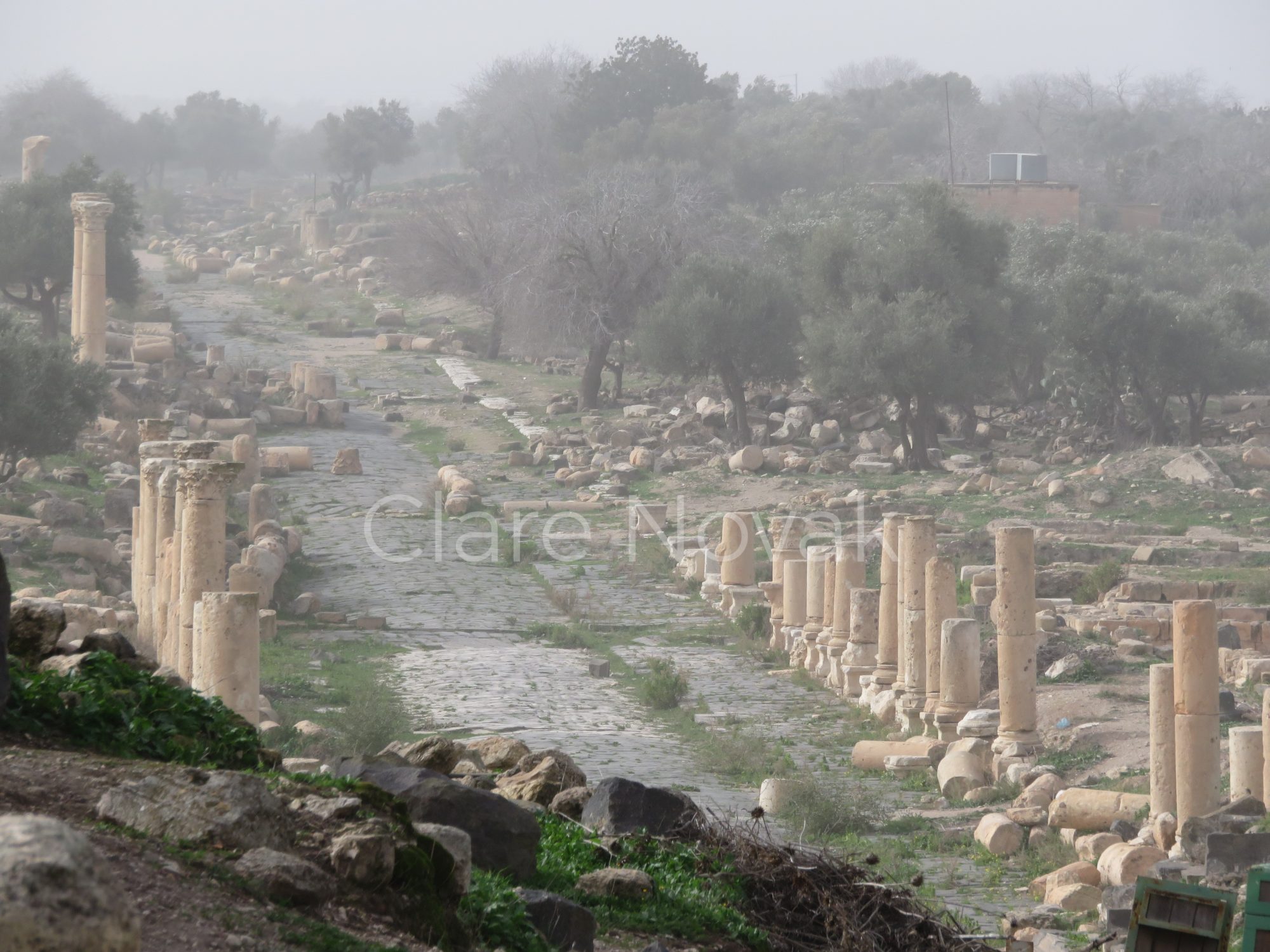 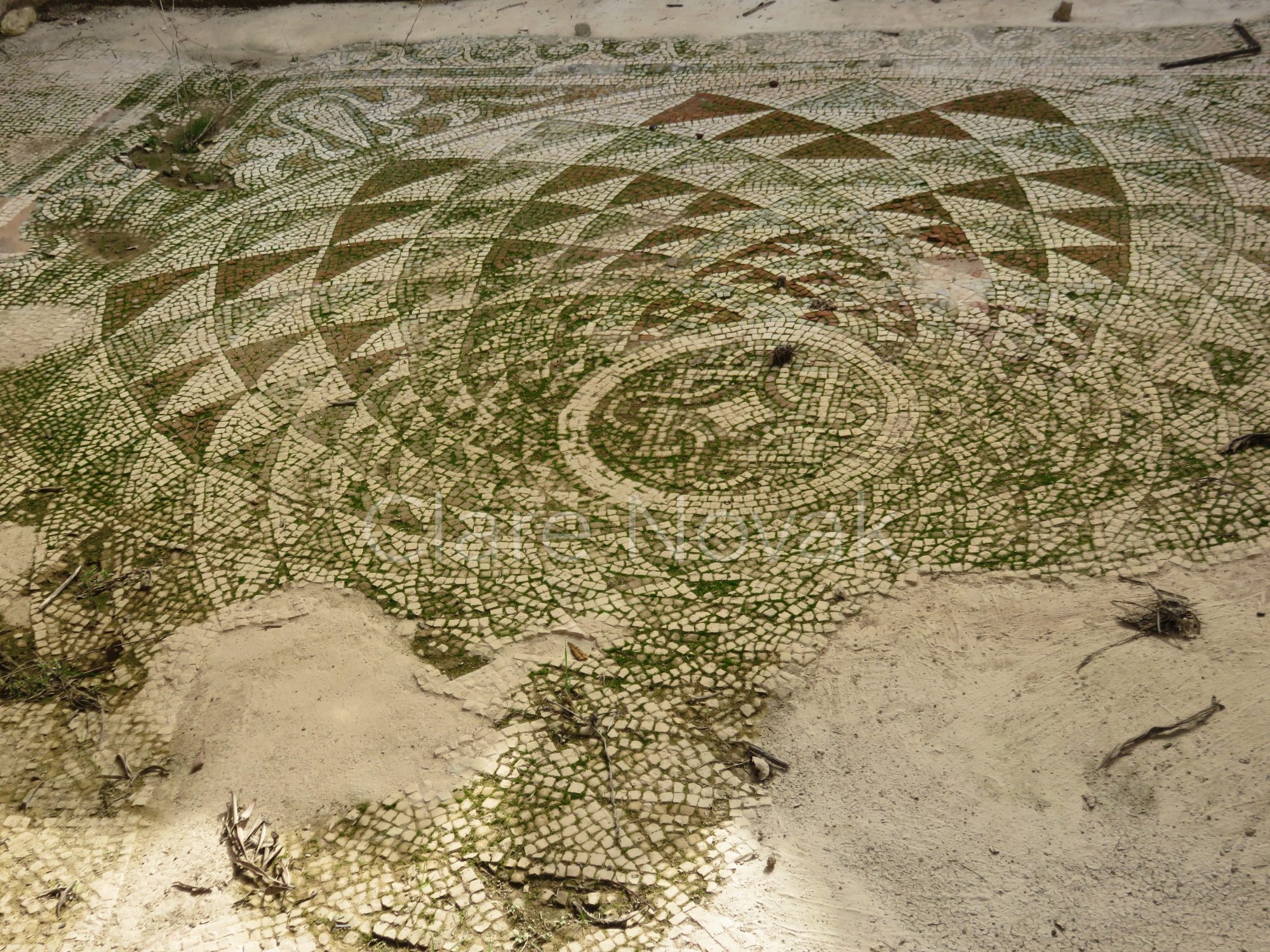 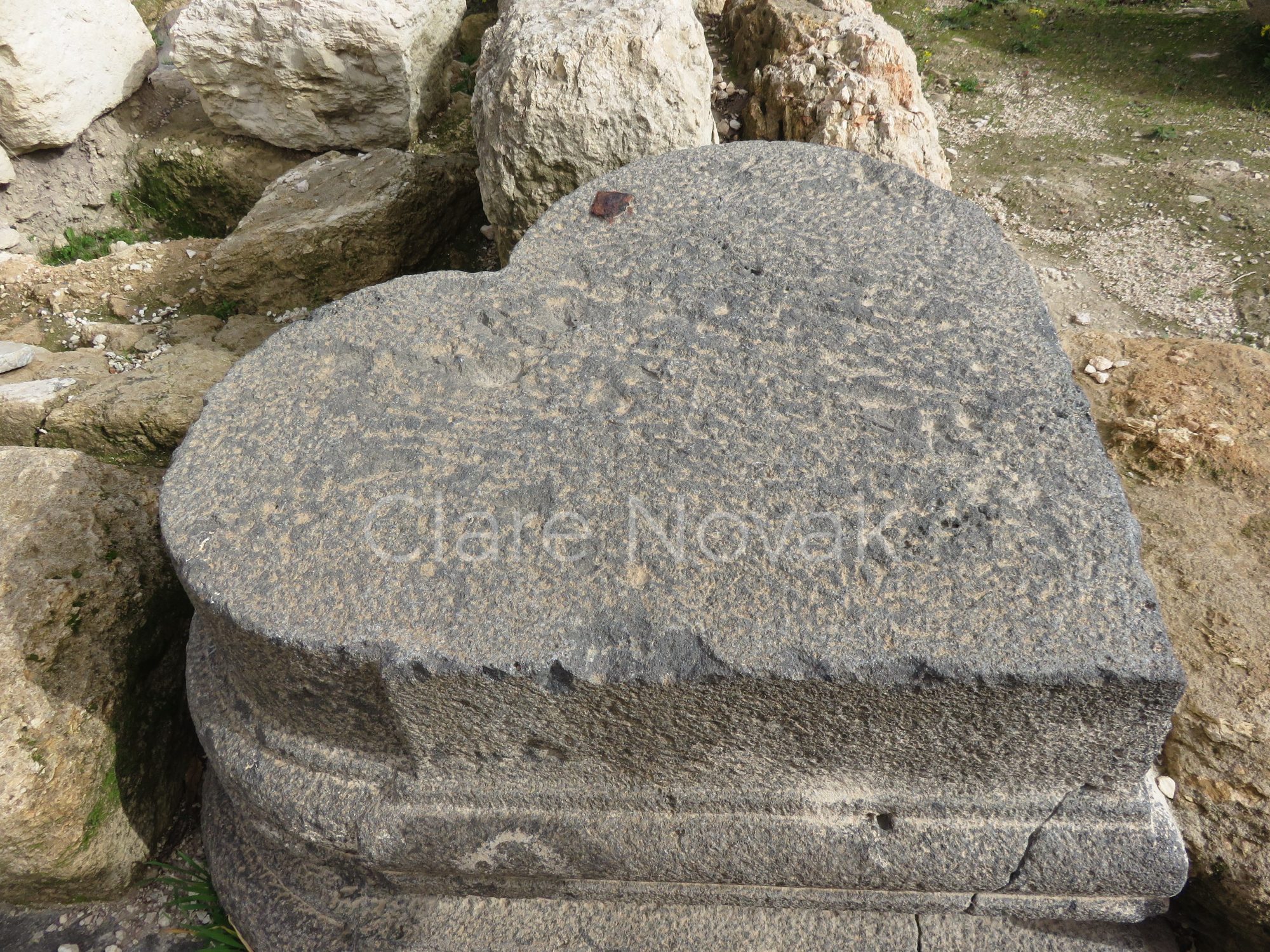 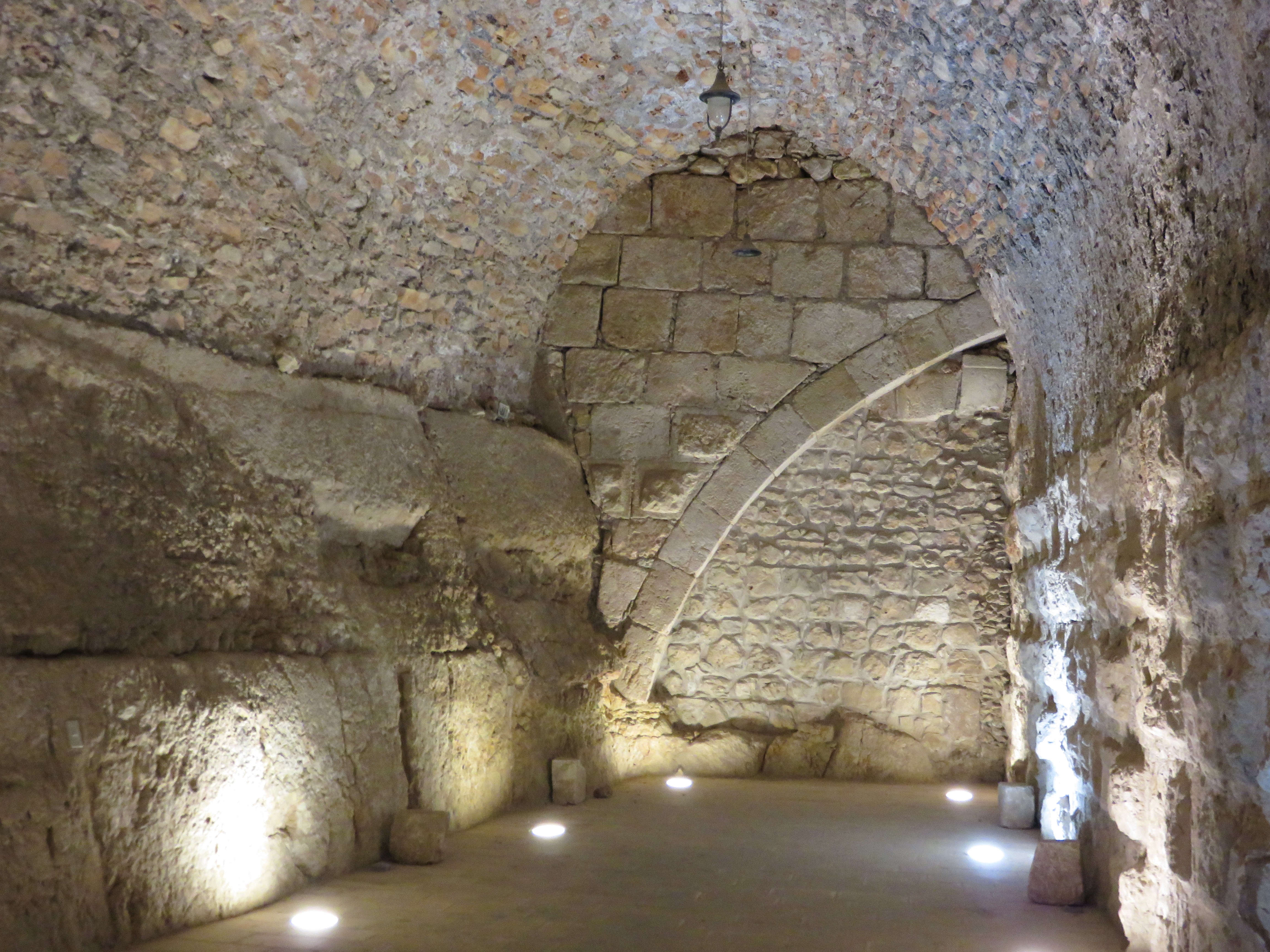 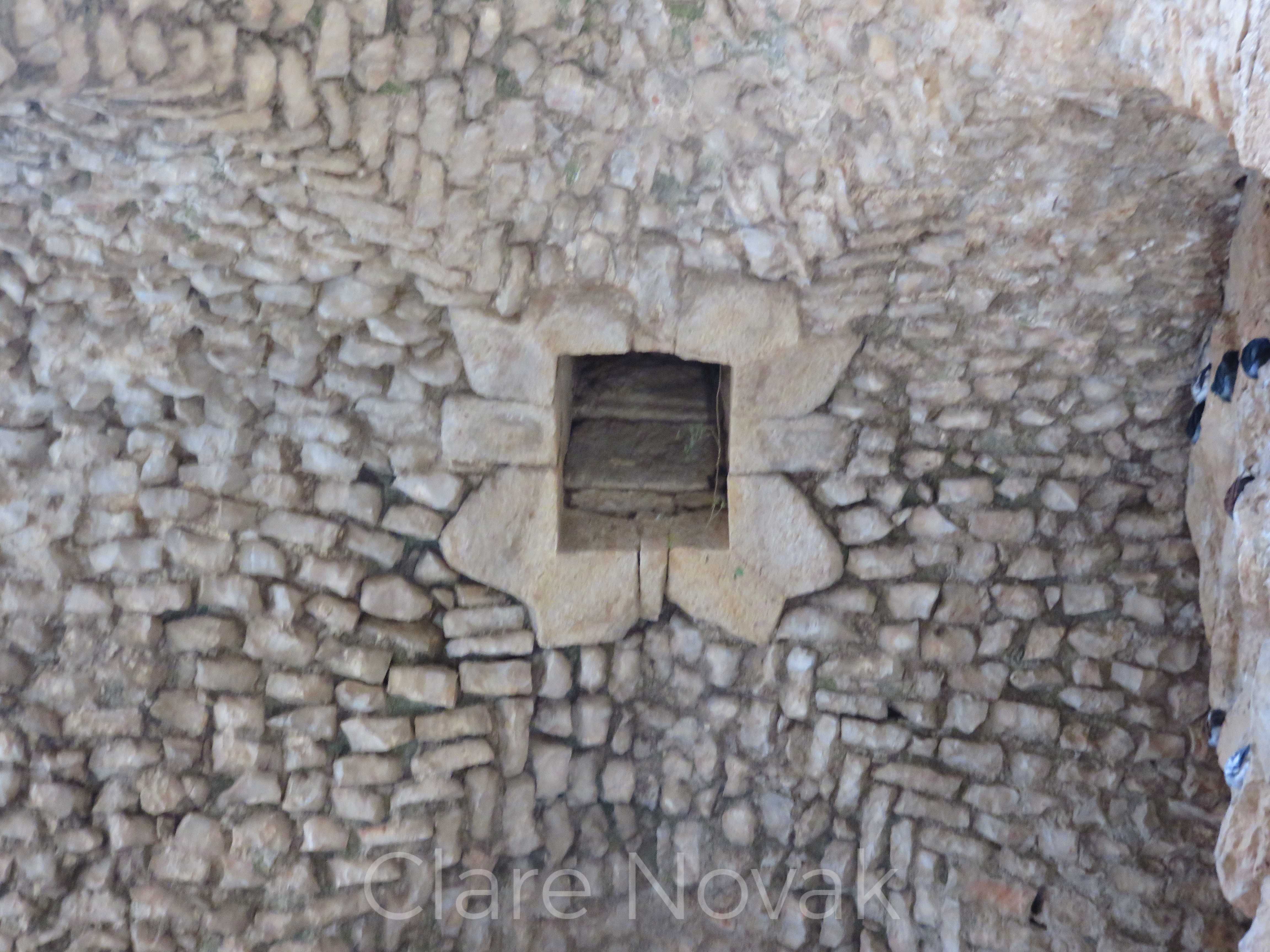 The driver was right on time and we had worked out in advance a stop in Jerash on the way to Irbid. Although settled as early as the Bronze Age, Jerash is a site of Greco-Roman buildings, later modified by the Byzantines and Persians. What remains is beautiful, graceful, column-lined streets revealing a city of theatre, entertainment, worship, bathing and shops. While a 749 AD earthquake destroyed much, enough remains.

Walking from Hadrian’s gate to the opposite entrance of the city one easily imagines how life was in the city. The boulevards are familiar things, linear things we can liken to our own. It is a stark contrast to the organic composition of Petra. The preservation is remarkable. Walking the hippodrome, it is nearly possible to smell the sweat of chariot horses and hear the yelling of the crowd cheering a favored team. Horse races we understand.

Had I seen Jerash before Petra I expect I’d have a great deal more to say. Poor Amman, I didn’t write about my site seeing there and looking back, those sites in Amman went from being astounding to the poor relations. It seems insane to call the well preserved Roman Amphitheater a poor relation. Equally, the Roman temple in the citadel is a disenfranchised cousin after Jerash. Amman’s Dead Sea scrolls hold their place.

Within two weeks, I’ve seen three of the six cities of the Decapolis inside Jordan, Jerash, Umm Quais and Philadelphia, (Amman now). Umm Quais has striking black columns carved from the volcanic rock of the area. It is a startlingly different view when we have become used to endless marble white. Another oddity of Umm Quais is perfectly heart shaped columns, or perhaps just bases for columns, it’s difficult to tell among the ruins. These heart shapes do solve a decorative issue in that they fit perfectly into the corners of square spaces.  Some mosaic floors remain relatively intact as well.

The wind and dust preceding today’s cold and rain obscured the view to distant valleys. The guide pointed out that on a clear day one could see Palestine and Jerusalem. The “I” country where Jerusalem currently resides is not mentioned here. It was Palestine for thousands of years, and that is good enough.

Setting out today in the cold rain today, it is clear that the trees on the mountain tops know, nearly to the point of toppling over, which way the prevailing winds blow. These trees huddle their branches all to one side as if the wind never stopped blowing. They hunched their trunks over and turn their back to the wind.

After an office visit, we stopped at Ajloun Castle built and rebuilt by conquerors and kings. The most famous of the rebuilders was the nephew of Sallahuddin, better known in the west as Saladin. At Saladin’s orders this was to serve as a stronghold against the Crusaders who could attack from Kerak and from the Bedouin who allied with the Crusaders. Kerak was held by Crusaders for about 45 years, mainly under Pagan the Butler.  Below and reused were the churches and fortresses of the Byzantines. Below their rocks are the Romans and beneath those the Greek, deep down to the Nabateans and deeper to the Moabites and so on to the Bronze age peoples and the shards of their pottery.

Striking about this castle is the separate constructions and the successive lines of defense. In addition to the common arrow slits in castle defenses, here the double arch leaving space to drop boiling pitch or oil on the barbarians at the gate is perfectly clear. Two sizes of stone balls are stacked up in an armory. Their purpose is to be covered in oily rags, put in a catapult, set on fire and hurled at the enemy.  A food storage vault was triple ventilated to keep the food cool and stretch out its useful life. Underground cisterns kept water cool and pure. This is a castle that is clear about its function. This castle is about war, not the frippery of state and diplomatic subterfuge. And now you can rent it for weddings.

Here, people mix. Jordanians, Syrians, Palestinians, and others show their faces in colors from licorice to the blue/white translucence of skim milk. Few are the peoples at the ends of the spectrum and yet there is a great mix in between. The women have a diversity of dress from the black tent to jeans and flowing hair. Mostly the choice is to show face, hands and feet. Some accomplish that with, in winter, an ankle length, light weight coat worn over a top and slacks. Others wear sweater coats over pants and dress boots.

Ah, Kuwait, sounds exotic and no doubt subject to all the fear and envy people who’ve never traveled for business…

The Lizard in the Artifacts

3/31/12 Taxila day finally arrived and all of us were sitting out front waiting at 9:30 sharp. The road took…