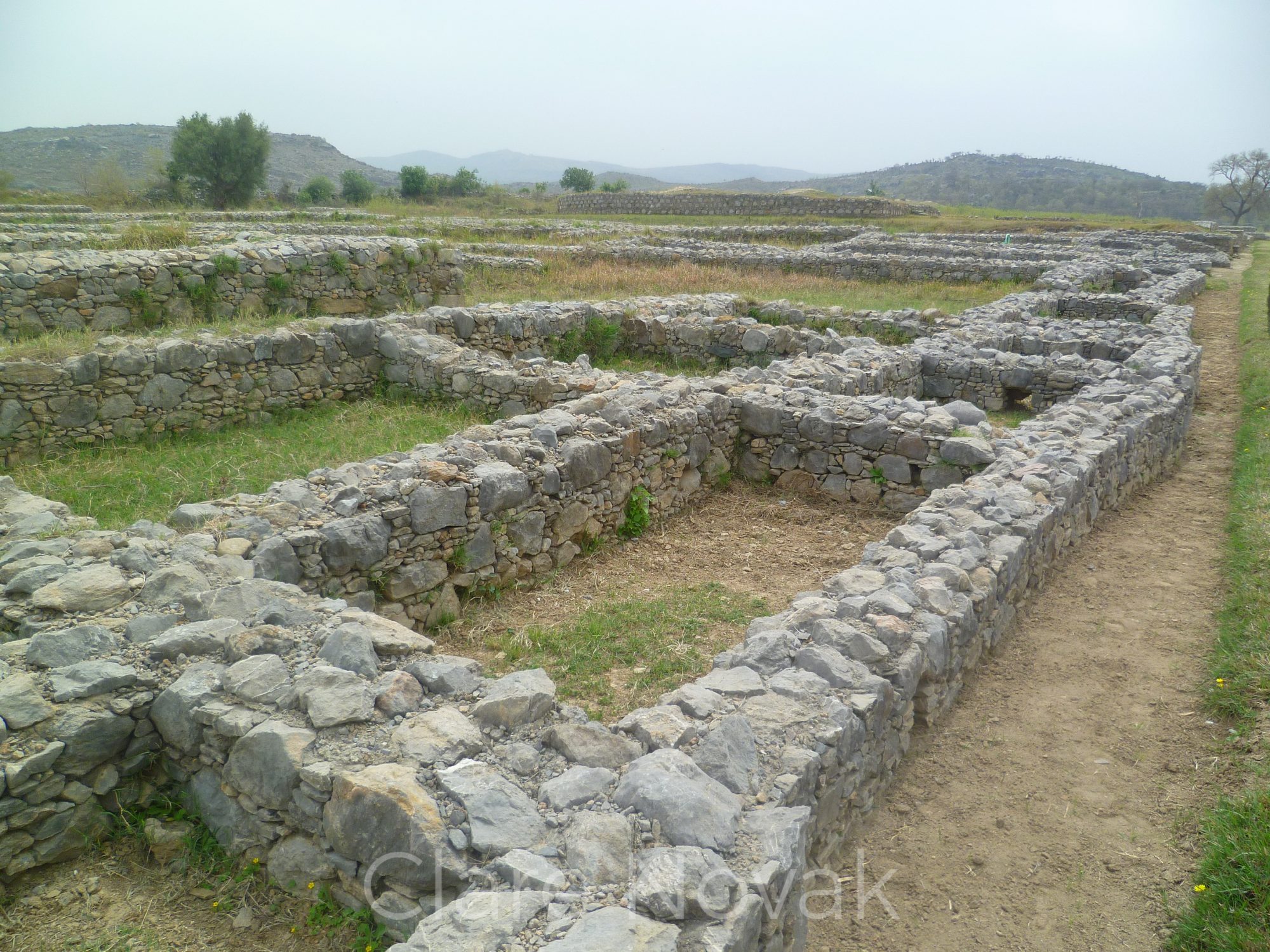 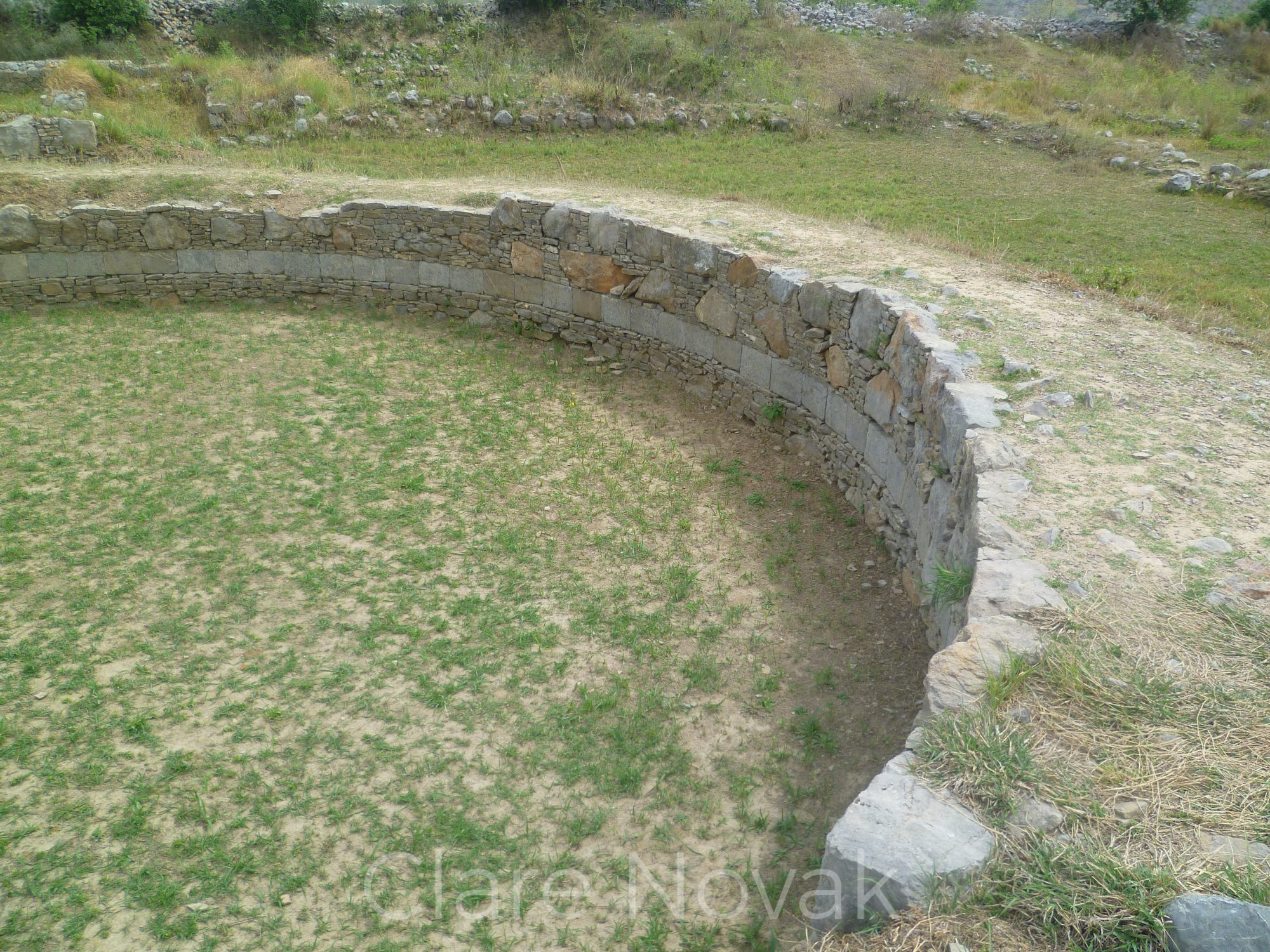 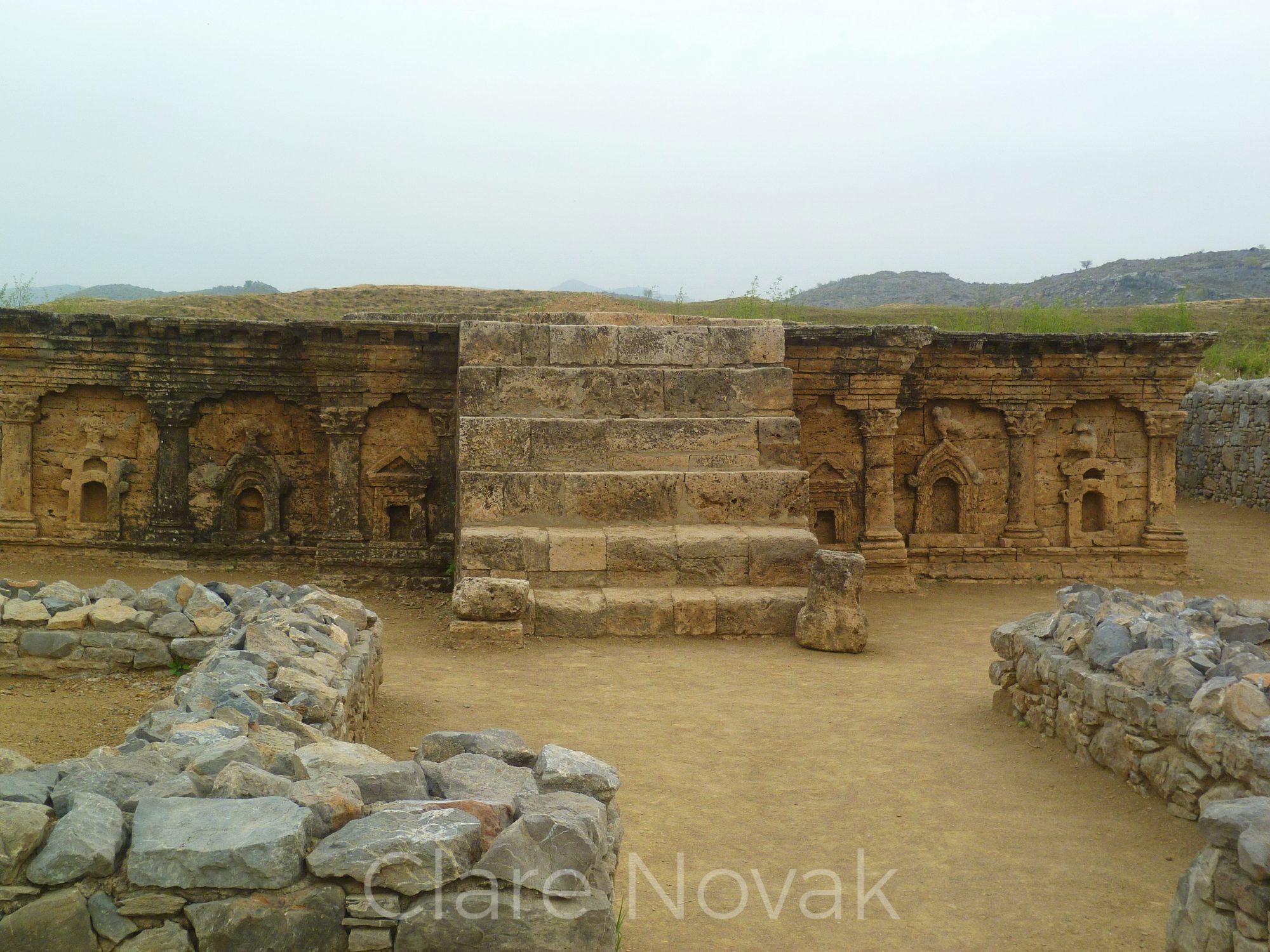 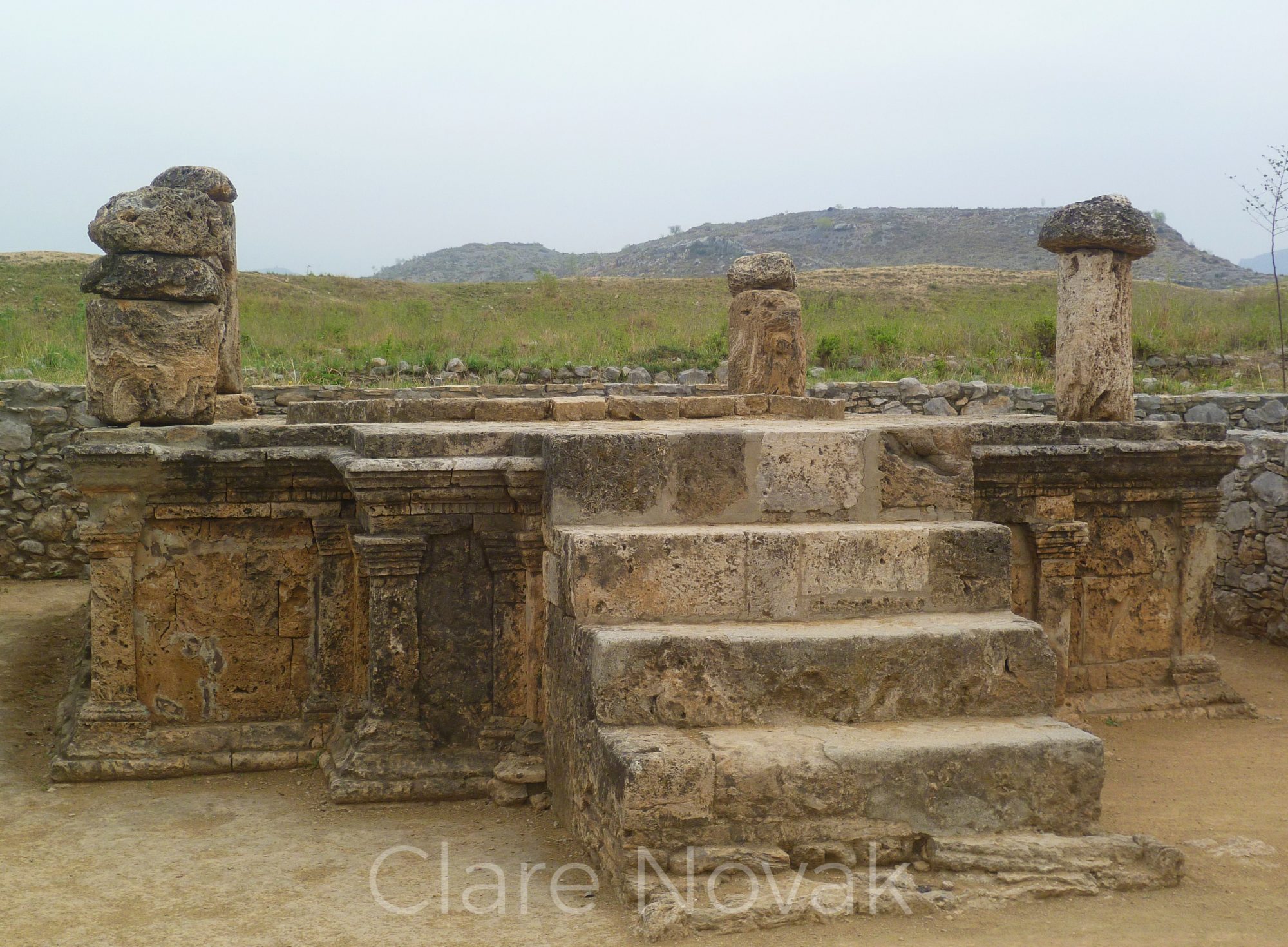 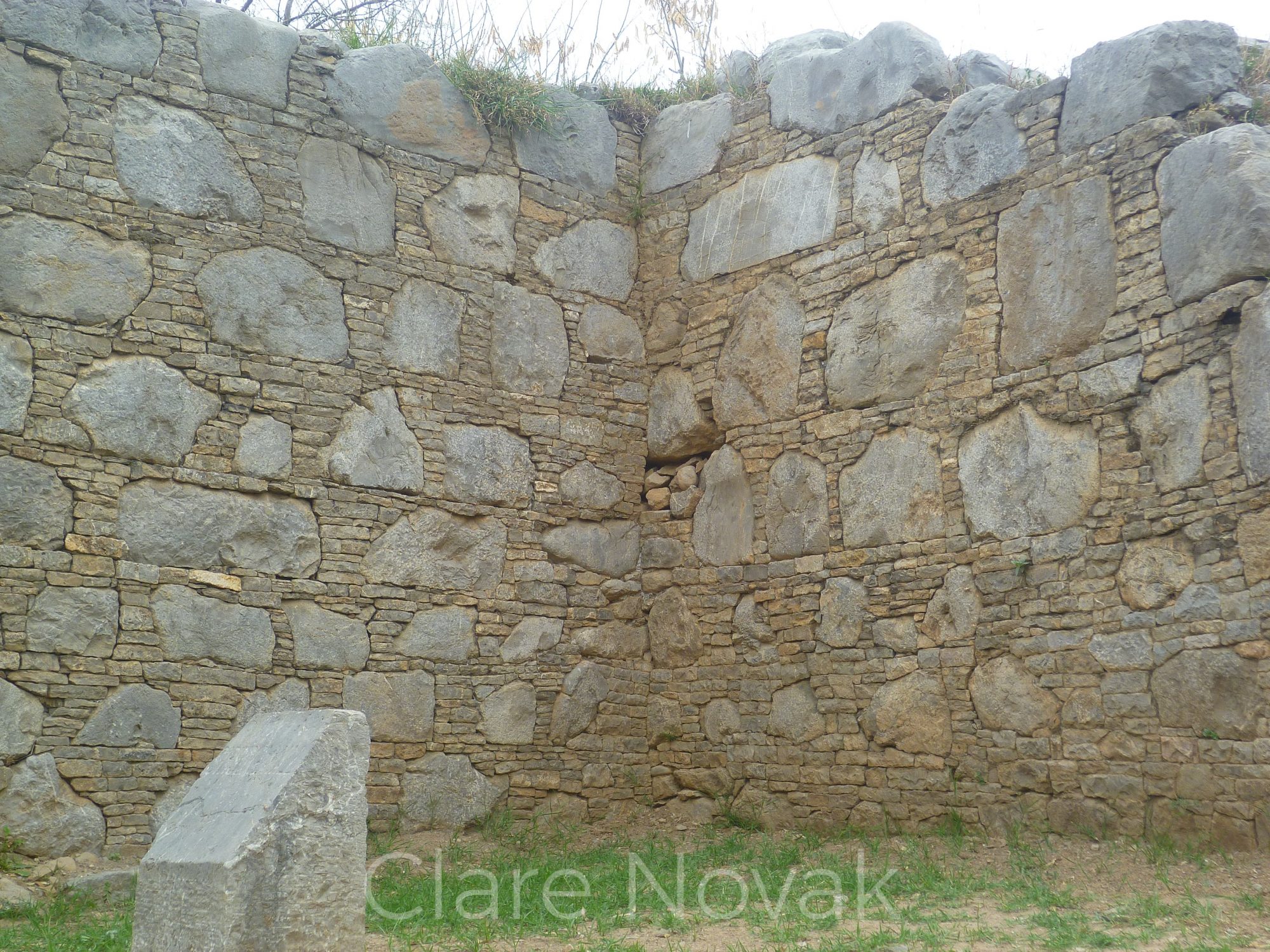 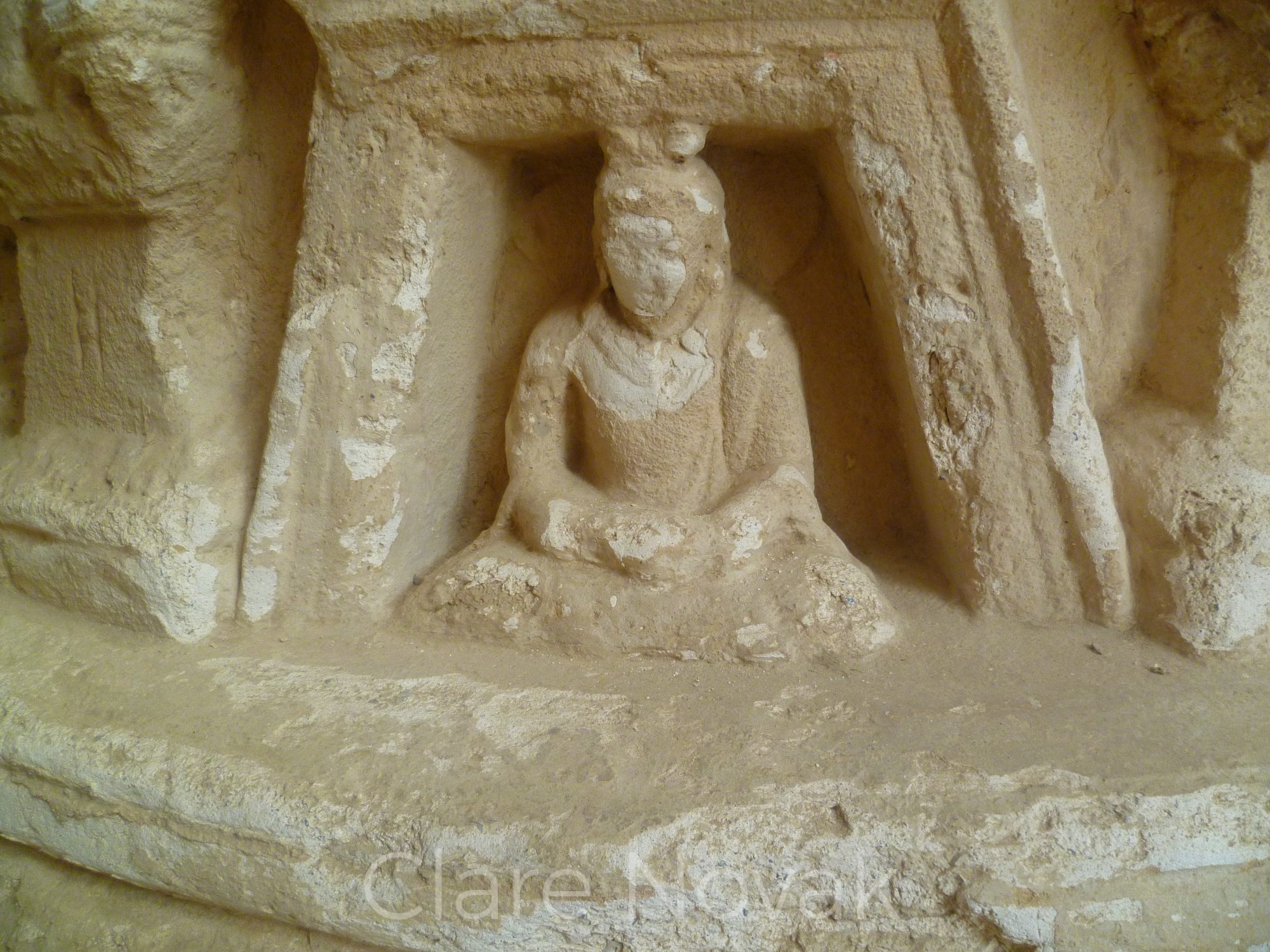 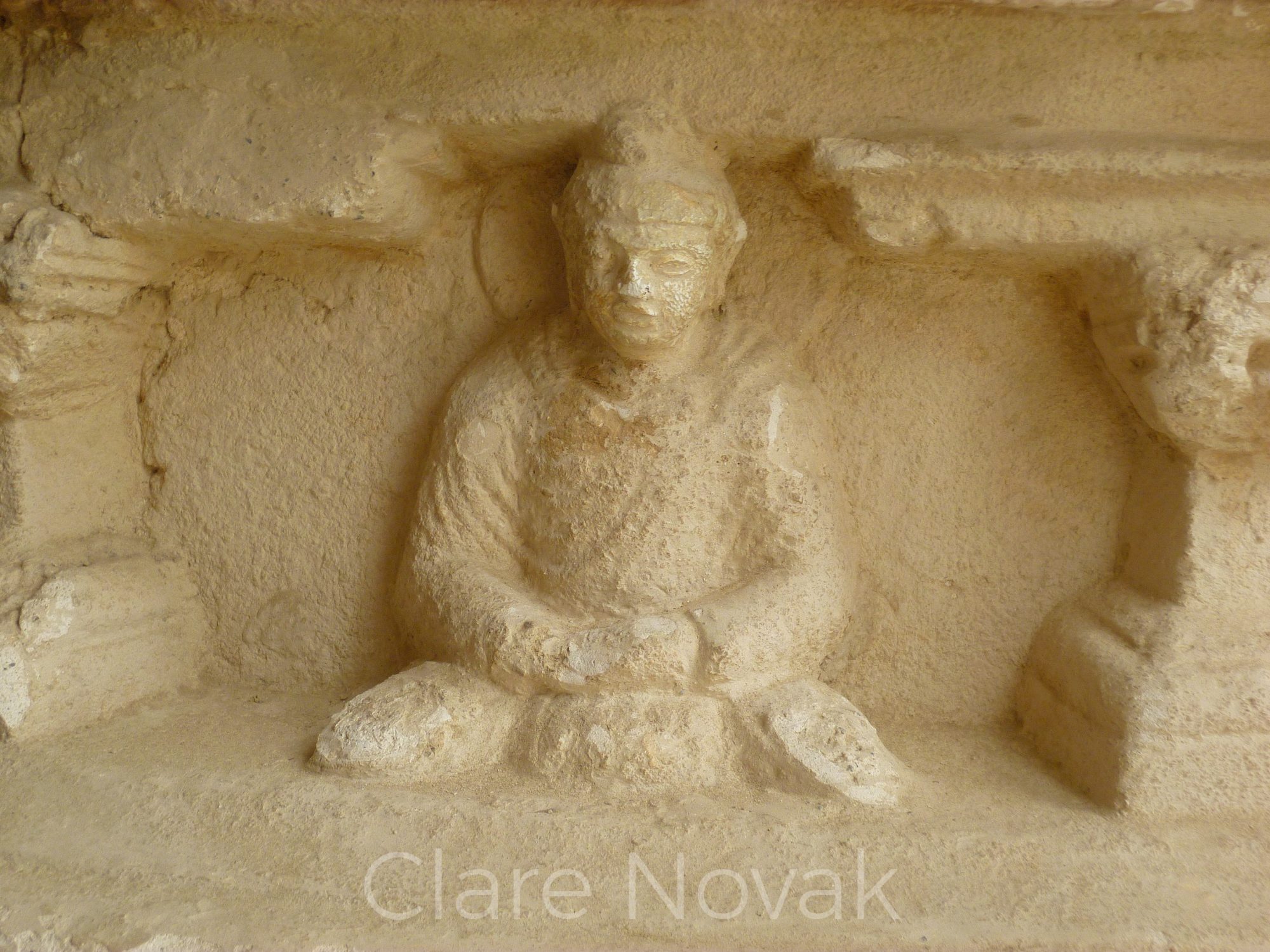 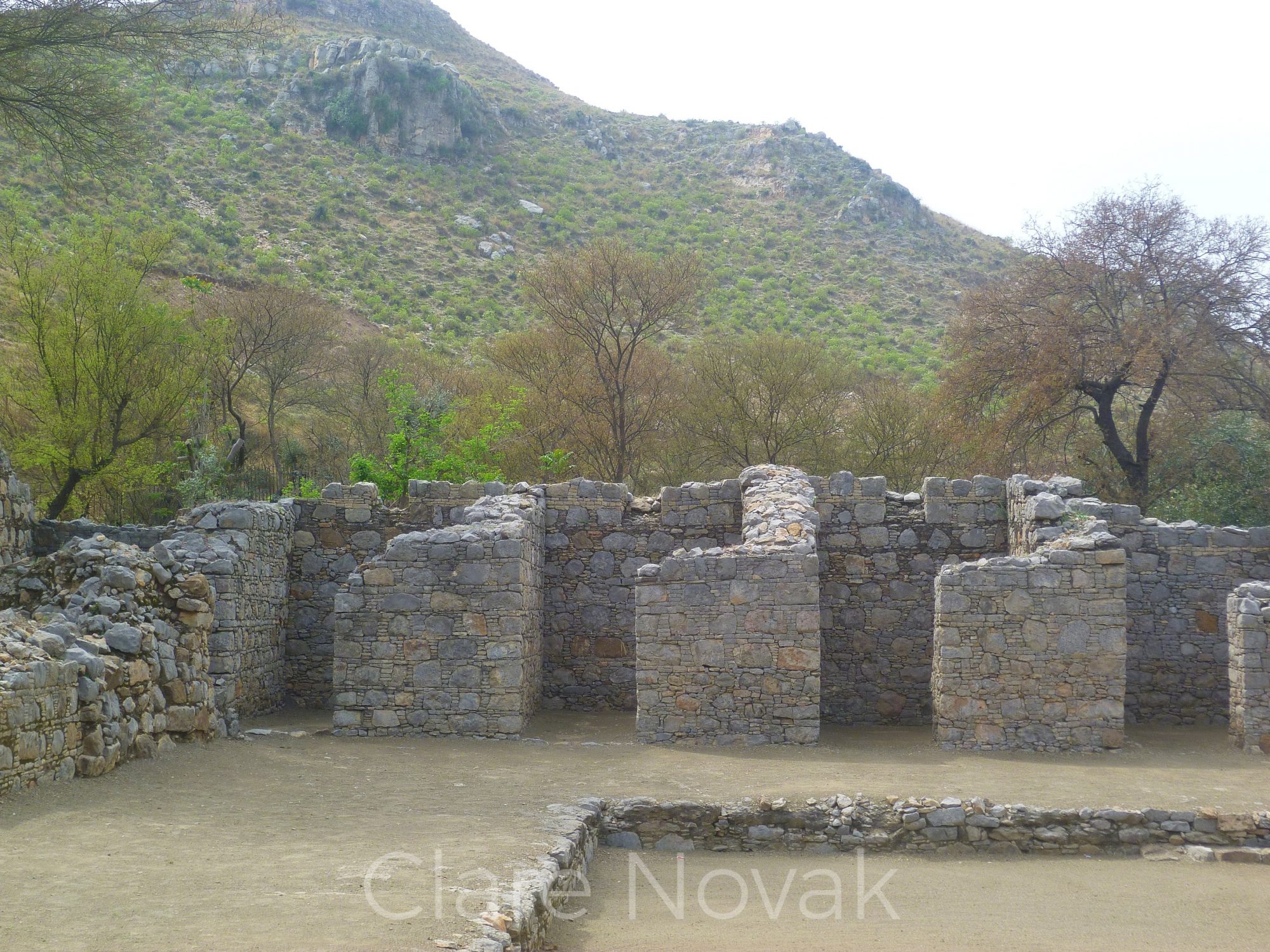 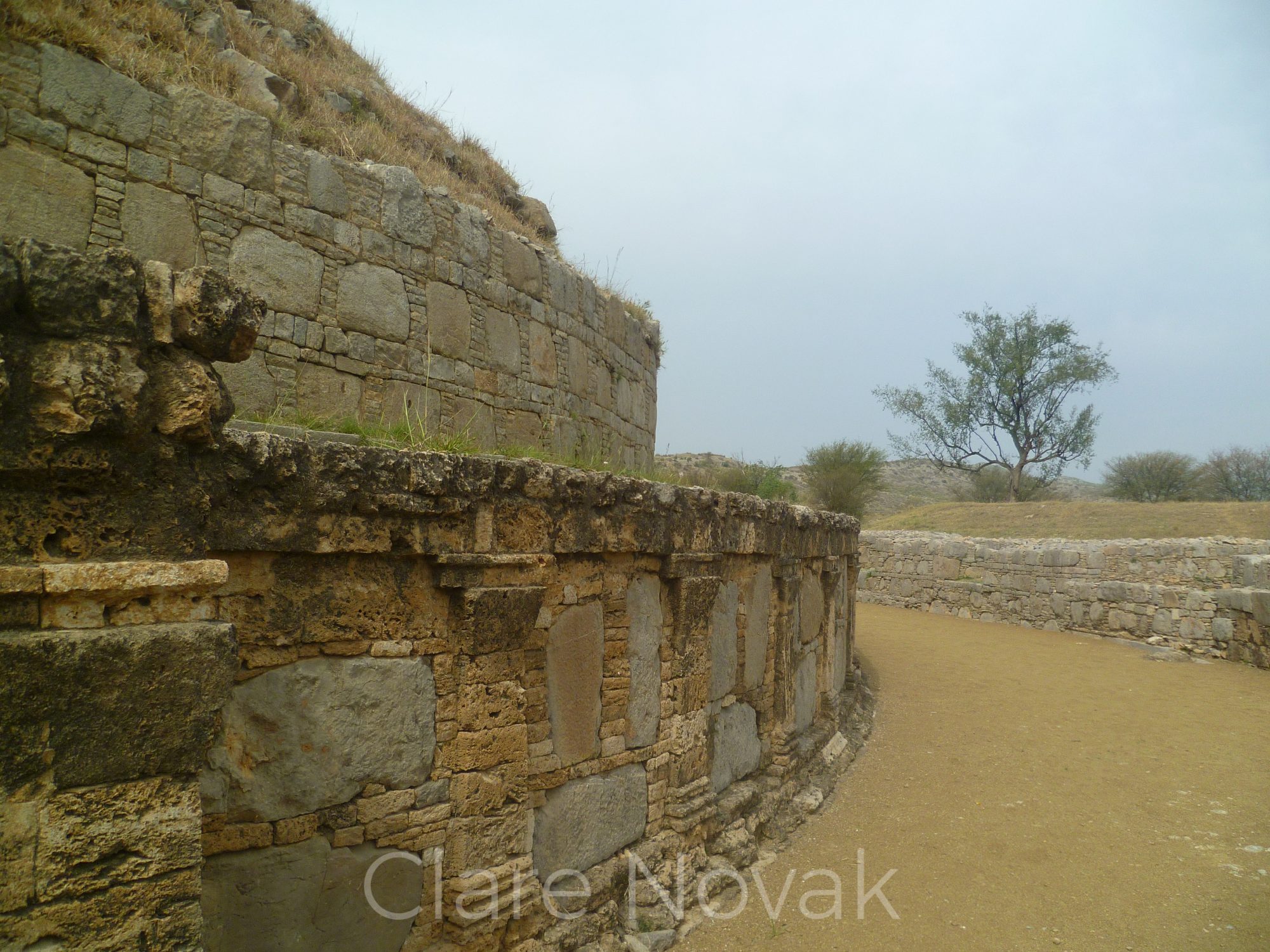 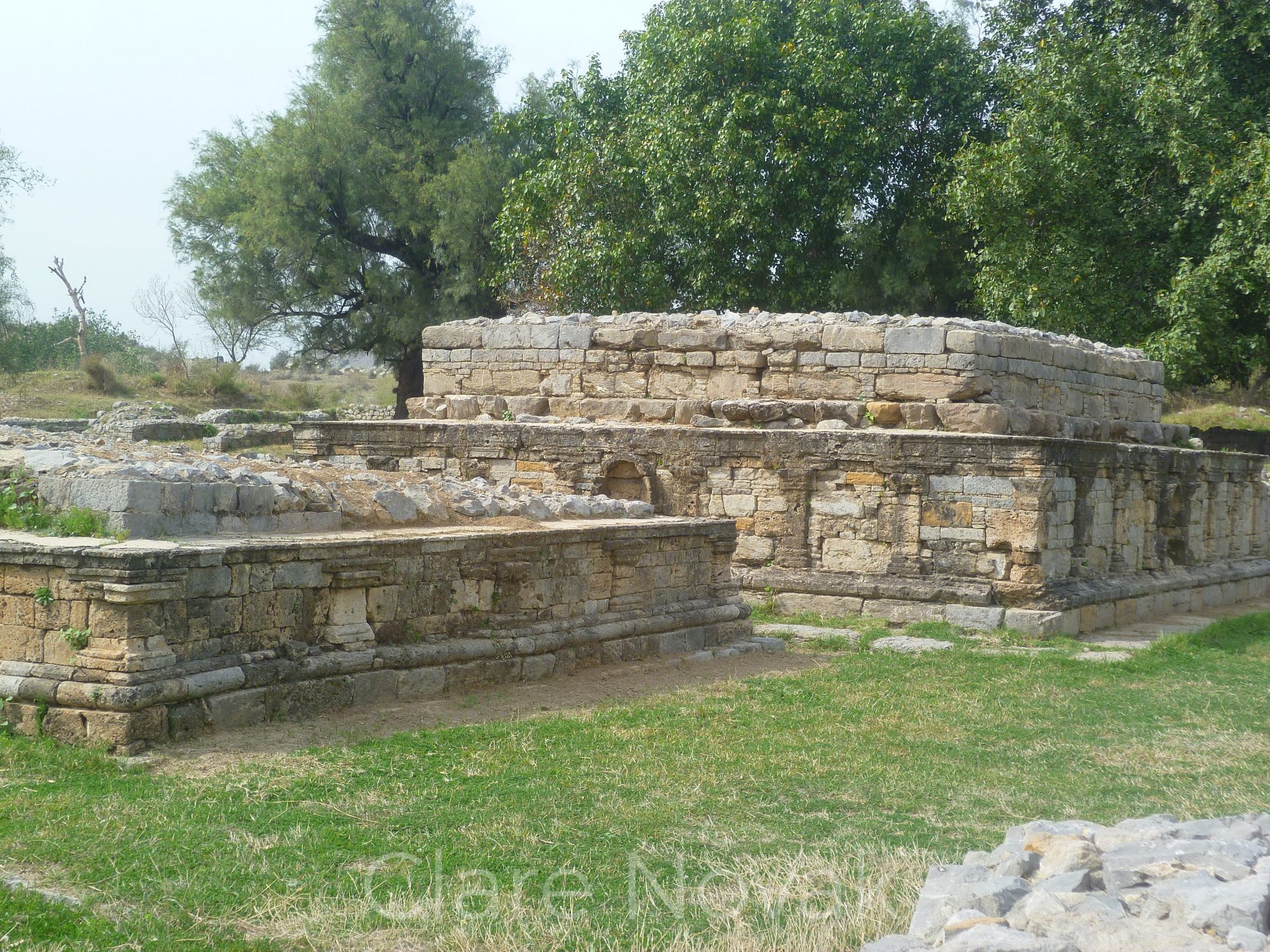 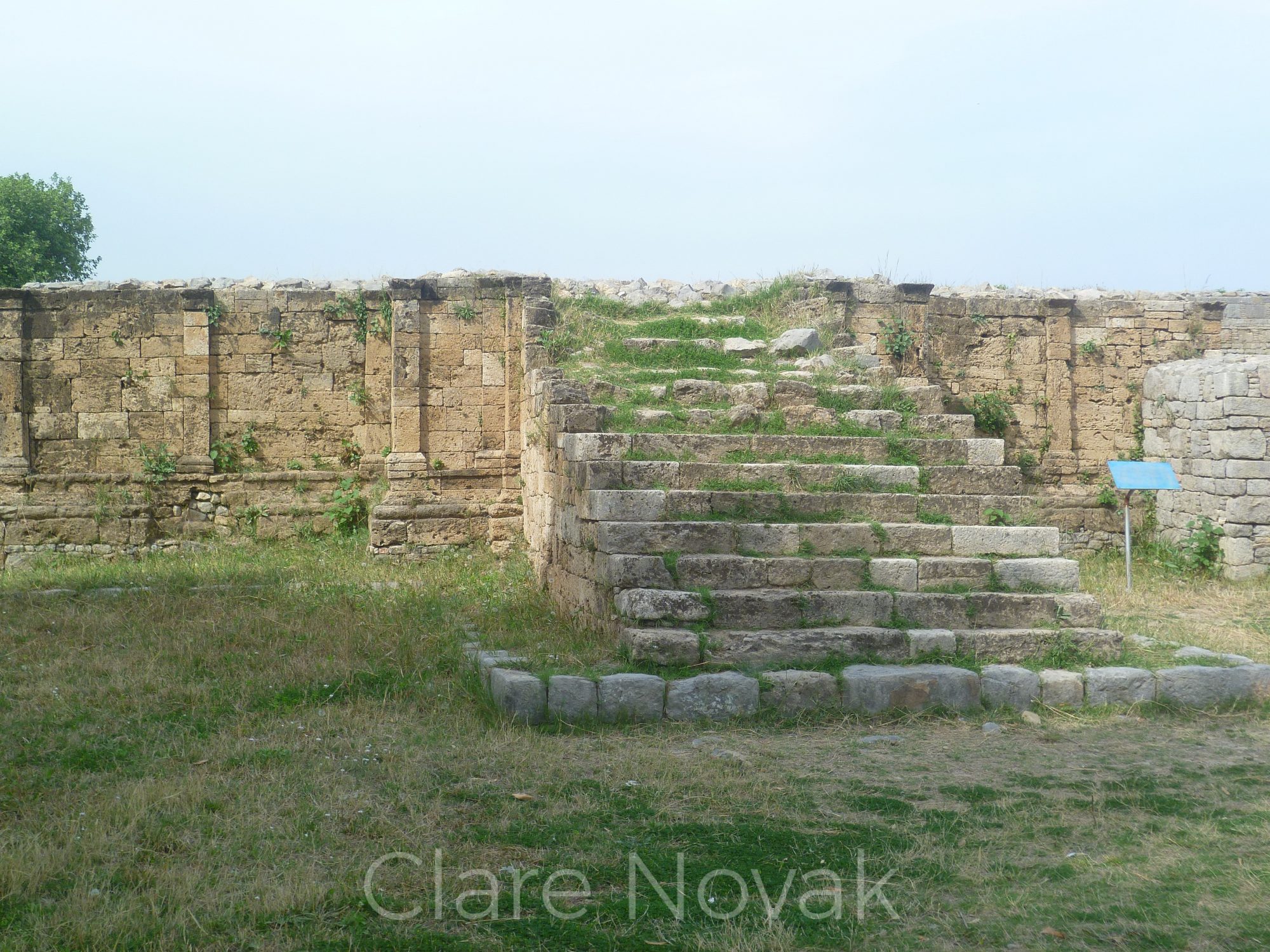 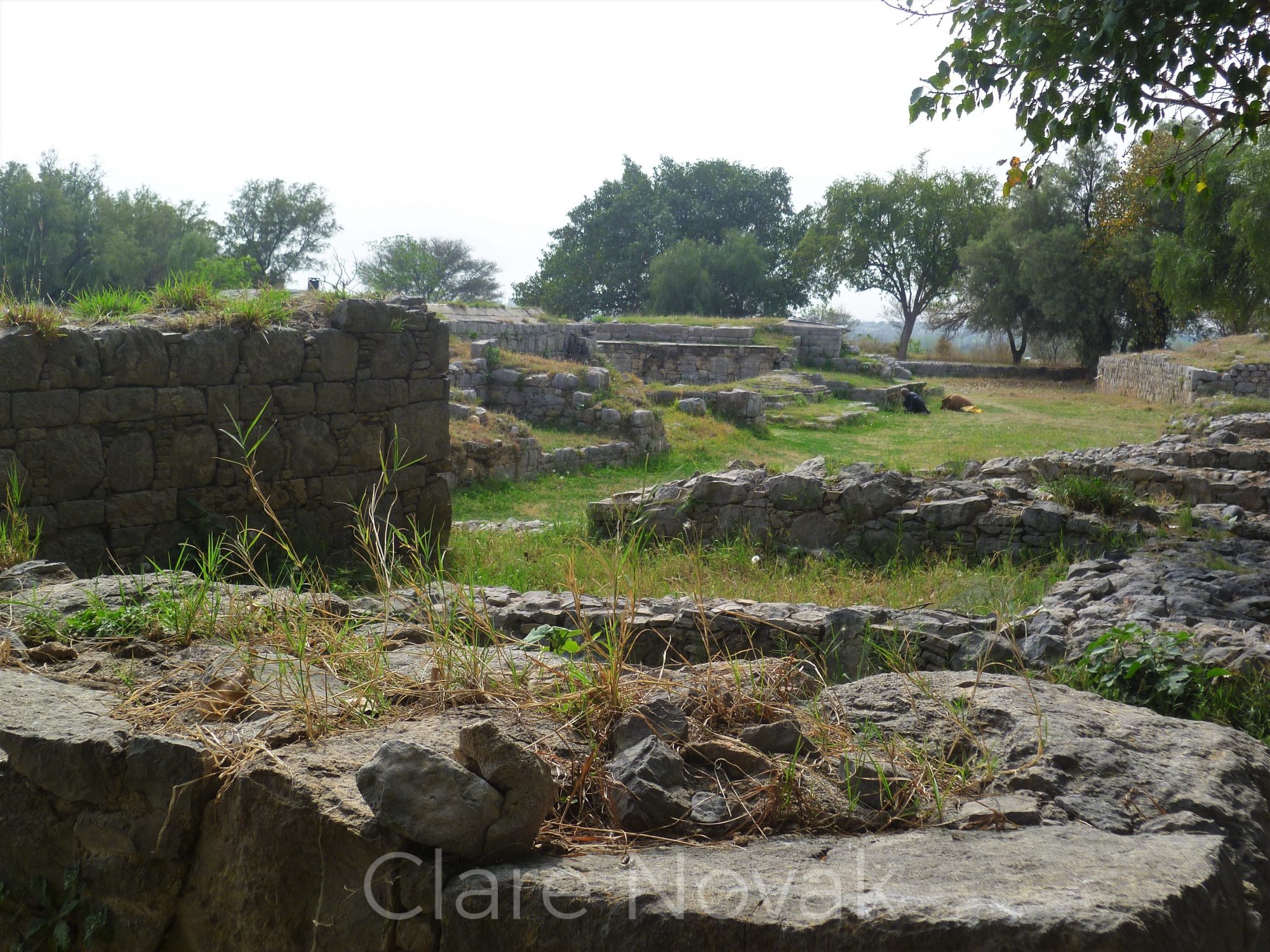 Taxila day finally arrived and all of us were sitting out front waiting at 9:30 sharp. The road took us outside Islamabad and into Pakistani countryside—unplanned villages lined with markets, food and the local specialty which near Taxila was stone carving. Shop after shop of paving stone and mortuary markers lined the road. The countryside is brown, dry and hilly in the distance. Even though it is spring, the few farms required irrigation. Dust from stone quarrying and cutting hung thick in the air.

Once we arrived, we had to sort things out at the ticket hut. As foreigners we were required to sign in and show our travel letter.  Inside and well-arranged were the artifacts from the sites around the valley and into the nearby hills. The large contemplative Buddhas lent serenity.  In the small space, history swept from the spiritual to the utilitarian. From Bodhisattvas to baby buggies, measuring weights to water jugs and exquisite beads in the shapes of animals all smaller than a half inch the makings of daily life from two thousand years ago were spread out for our eyes.

You’re wondering about the lizard I suppose.  As I was ready to move from observing the statues in one encased display, I noticed movement. There was a small lizard inside the display case. Clearly these were not the airtight, display cases.

Throughout the area are sites that have served many masters, Buddhists, Christians, local Lords. Some went into disuse when their rich patron departed earthly life. Others succumbed to the Huns. Some were covered by the dirt of ages and others damaged in the quake of 40 A.D.  Sirkap, Sirsuhk, Mohra Moradu, and Dharmarajika Stupa are names the do not fall easily from the western tongue.

The foundations of Sirkap speak of a planned city with a long, straight main street and right angled cross streets.  Small shops fronted the main street in one block. Temples dominated another. The Jains had used one temple. Like all good real estate, one civilization had simply built on top of another. In Sirkap, they have only excavated a few levels, there are more beneath.

With a washed-out sky and haze, it was difficult to make Sirpak look interesting in the photos. The decorative pieces of the temples had long since been stolen or moved to the museum in Taxila.  Sirsuhk was likewise difficult to capture. As a former Buddhist monastery, it was austere to begin with. Thousands of years erased still more. There were walls to contemplate and little else.

Mohra Moradu, also a Buddhist Monastery proved more robust. The Buddhists chose it because it was far enough from town for peace and privacy and close enough to walk to with rice bowl for begging. The stupa there is partially preserved as are some of the statues.  A stupa is the crypt of a holy person or persons. The design of the monastery is clear, large sections of the walls remain and with a little modern repair visualizing the daily lives of the monks is simple, as simple as their lifestyle. The Sufi people come here to pray as well as the Buddhists. They leave behind them the colorful cloths or ribbons or flower strands that mark thanks for a blessing received.

The afternoon was yet young and so we decided to visit one more site, Dharmarajika Stupa. Like Sirkap, this site covers acres. Like Mohra Moradu, it possesses a large circular stupa as its centerpiece.  Unlike the others, it feels more expansive, more used, more livable. It has the easy feel of community. The communal clothes washing pools are in sight of the stupa where the faithful would walk the circular path at least eight times and depending upon their vows, perhaps as much as one hundred and eight.

There is too little history of this place and of those times in my head for the pieces to come together in a single story. What I did feel was the small sense of freedom, breathing room, that came with the this Buddhist space in.

“We sure covered a lot of history today. What time is it?”

We all laughed at J’s observation which summed things up perfectly. We’d walked quite a bit in temperatures hanging about 90 and were not energetic enough to head for even one more sight.

For two years, I lived and worked in Pakistan. No doubt you've already formed an opinion of what that was…

A woman touring in nations not her own ought never fully slake her thirst. It would have a consequence that…

Virsa Lok, proved an interesting experience. One follows the white marble road to weave in and out of the cultural…