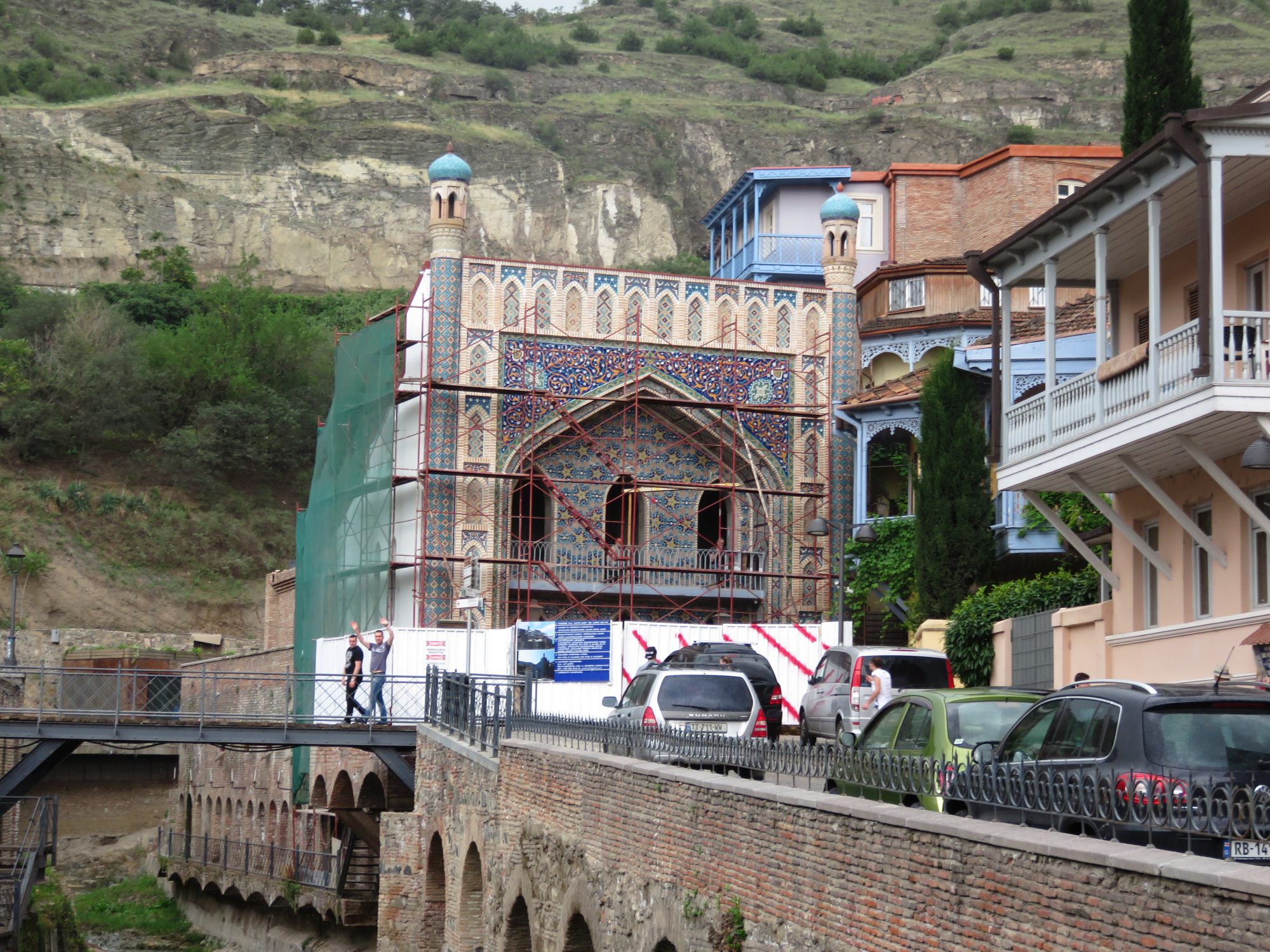 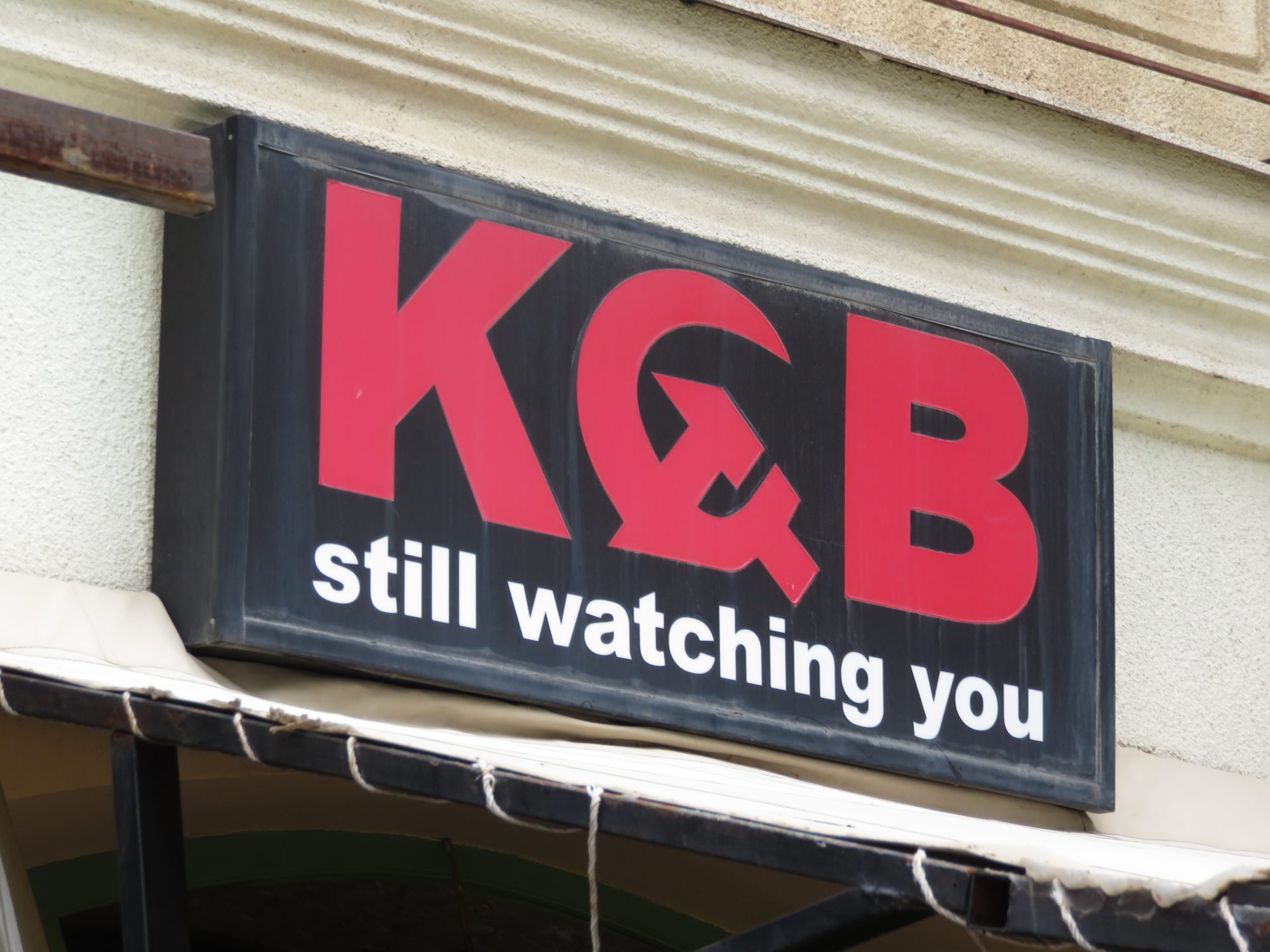 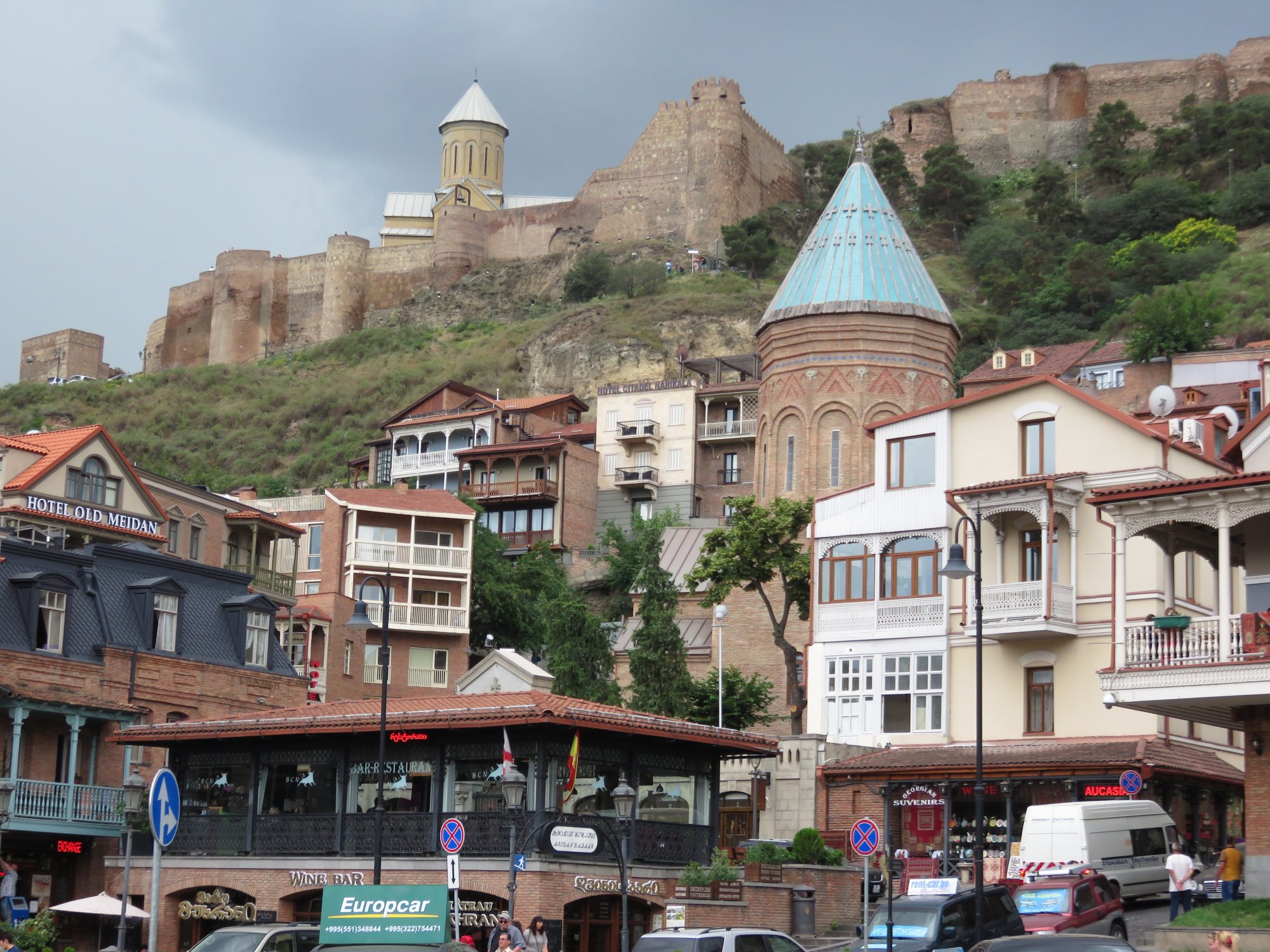 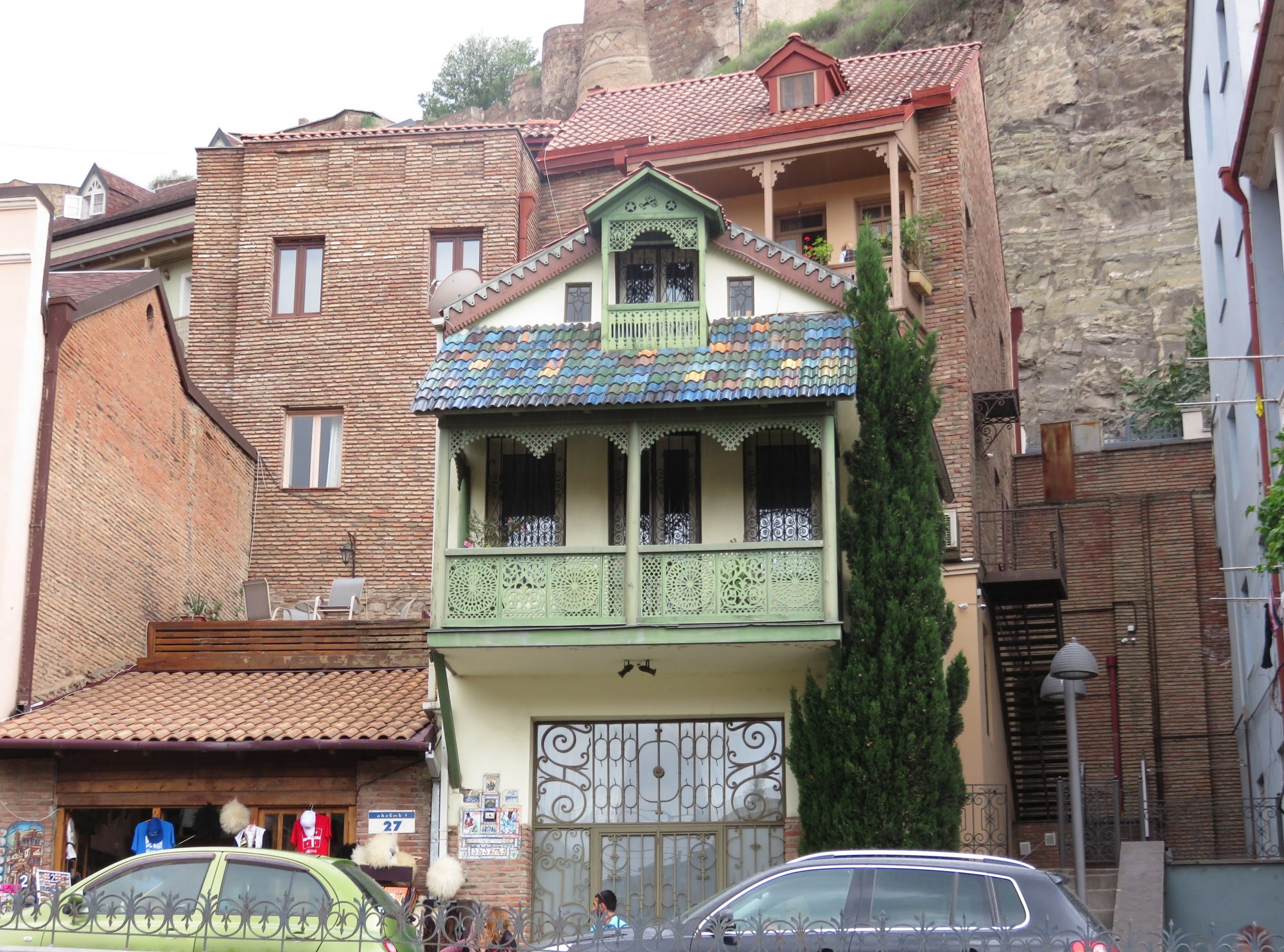 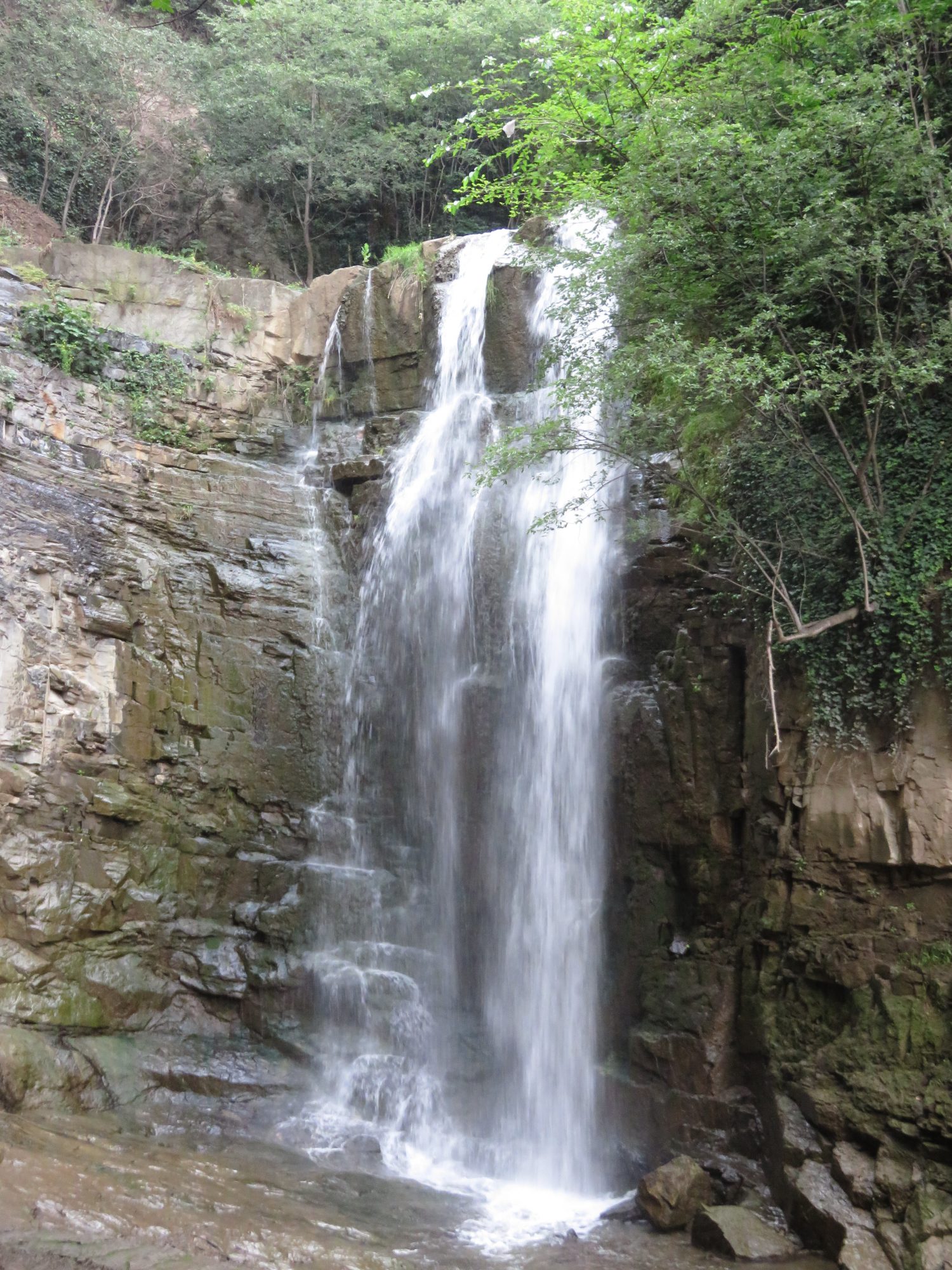 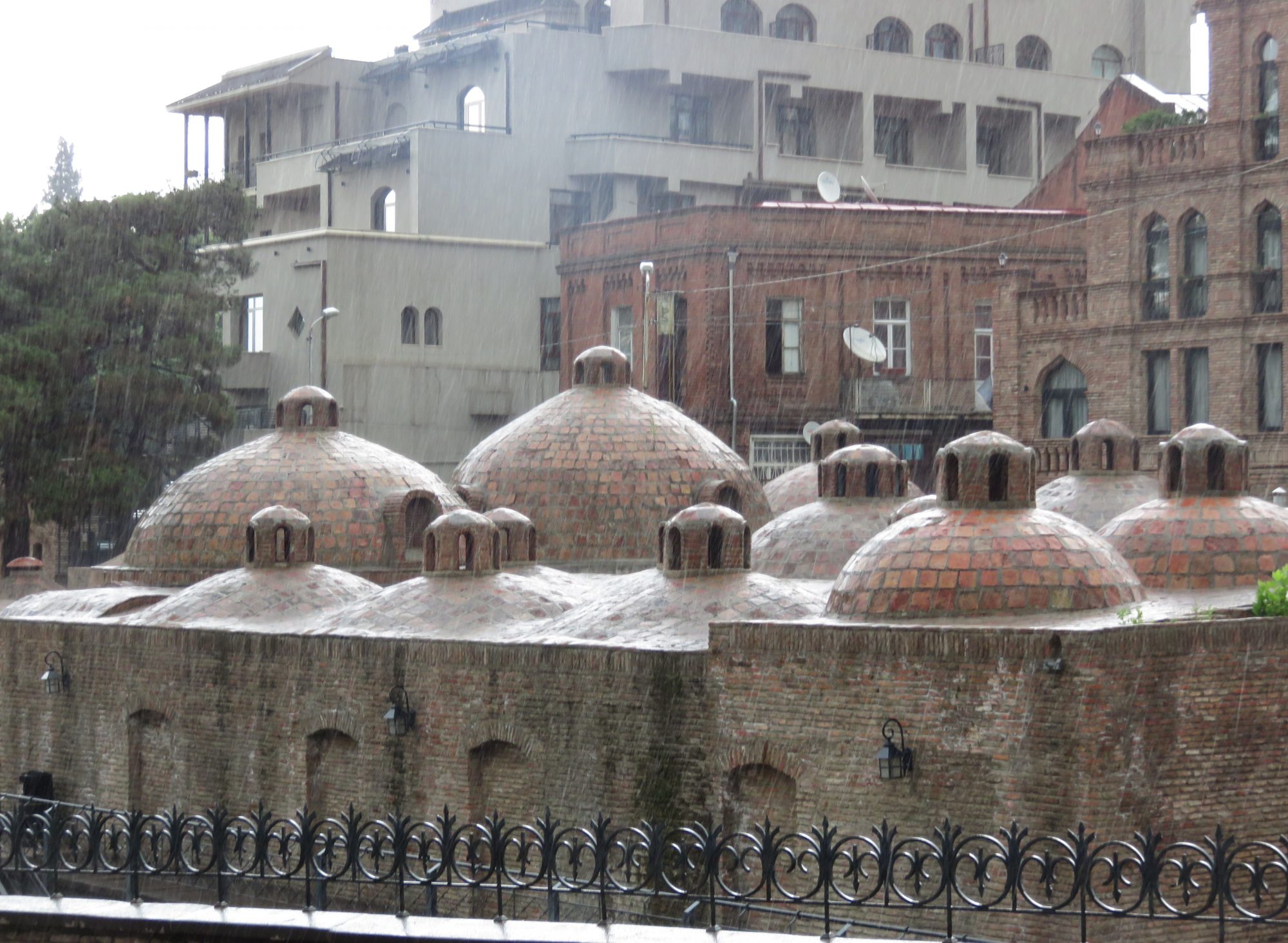 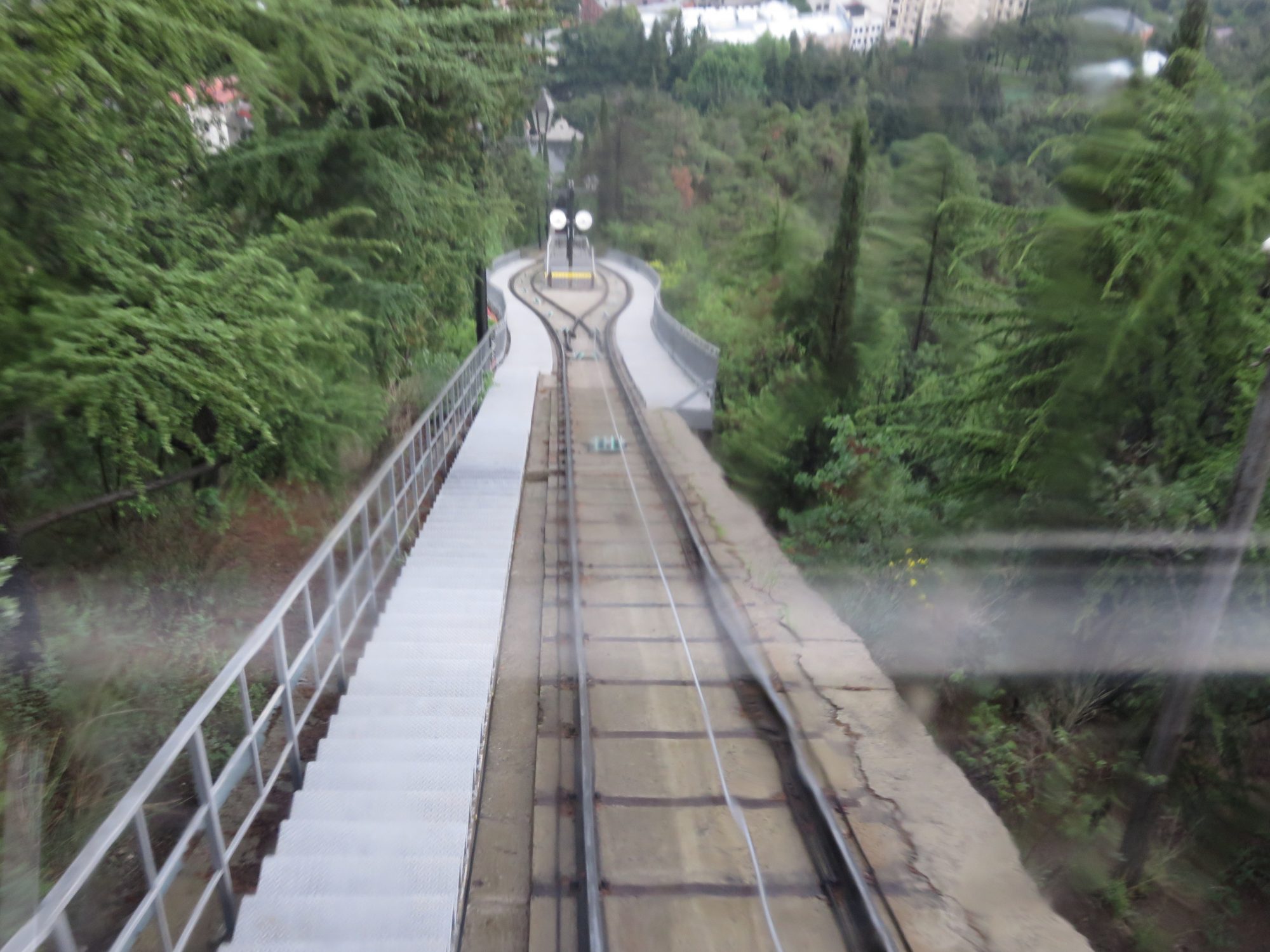 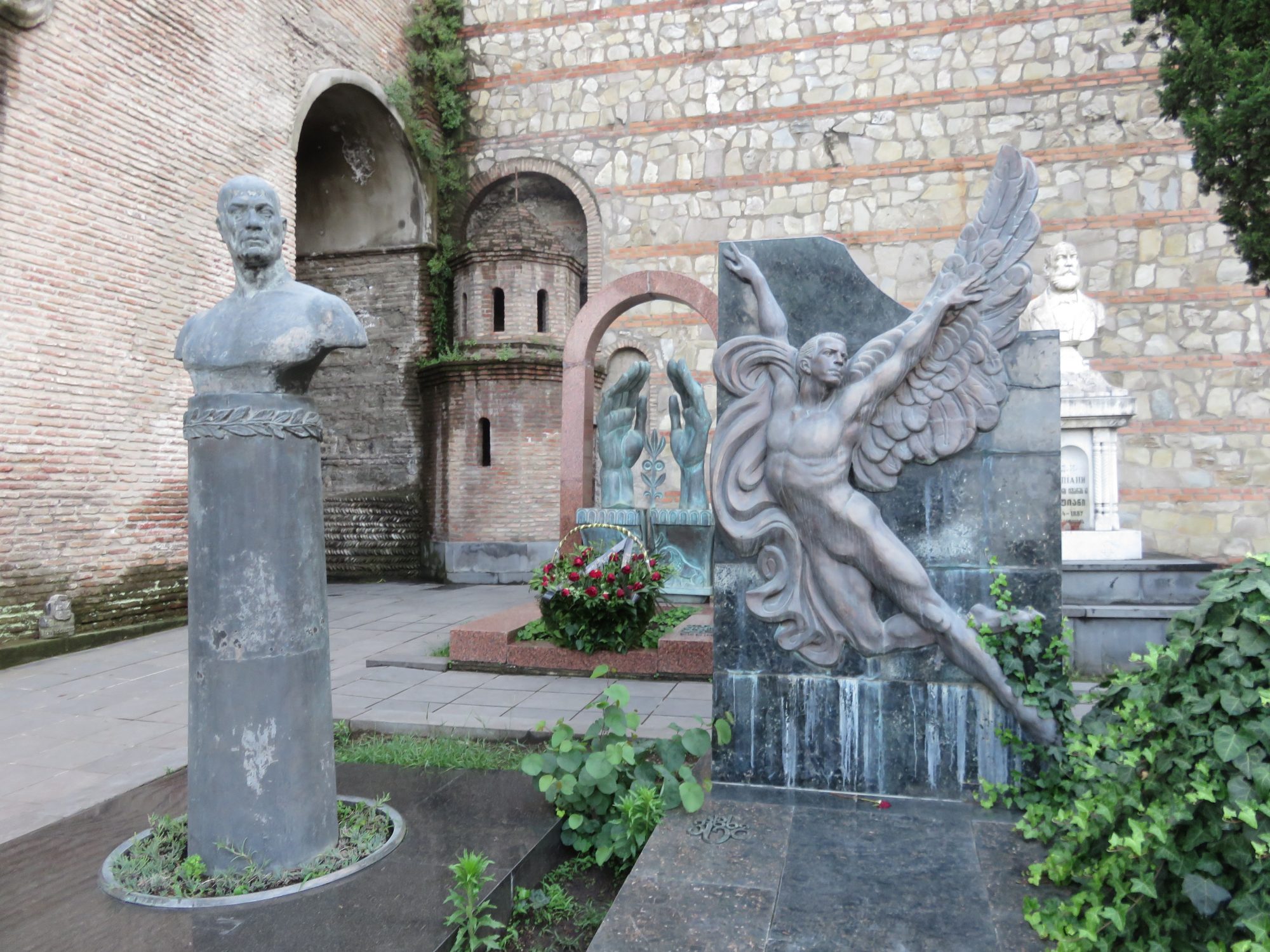 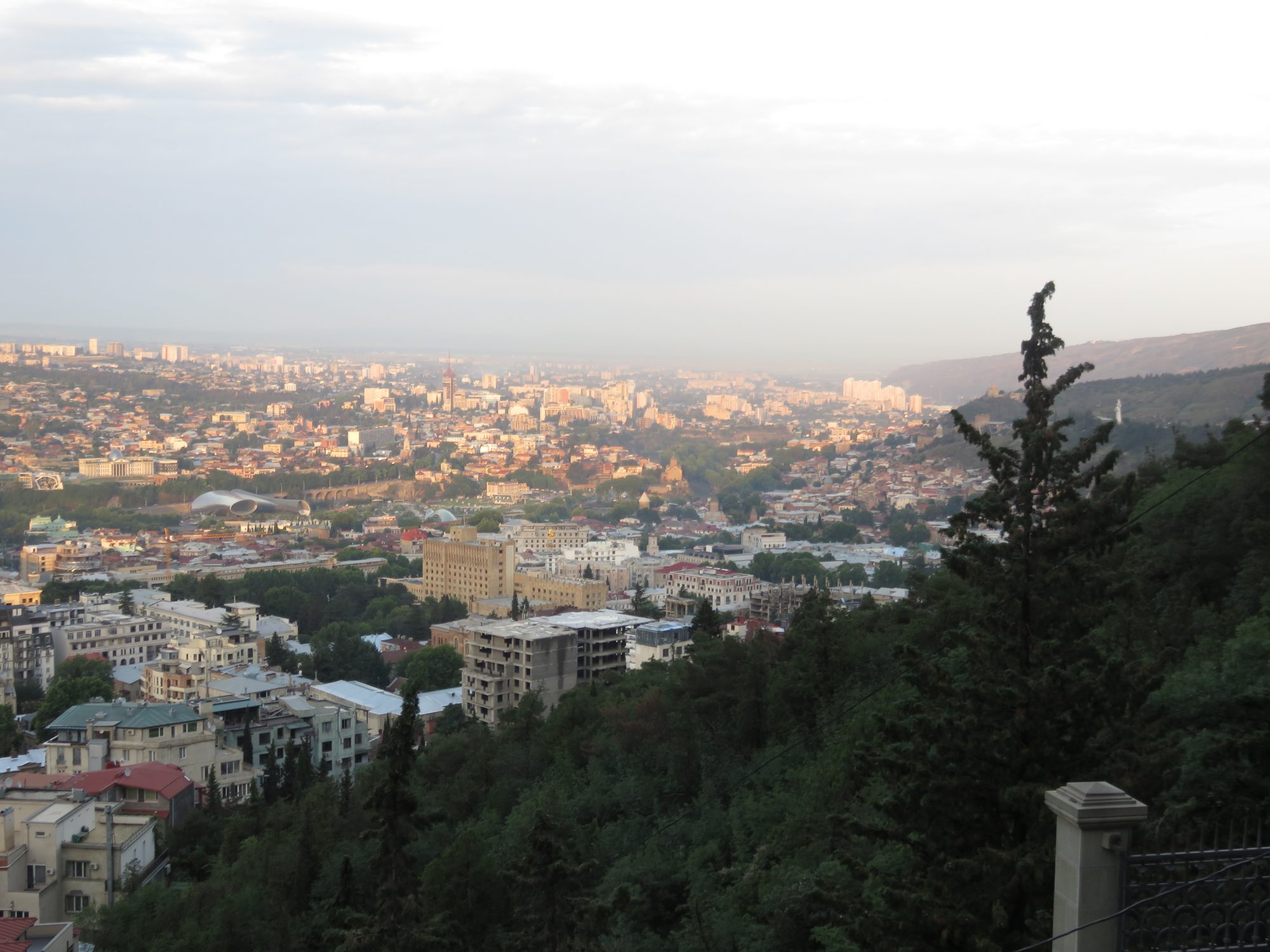 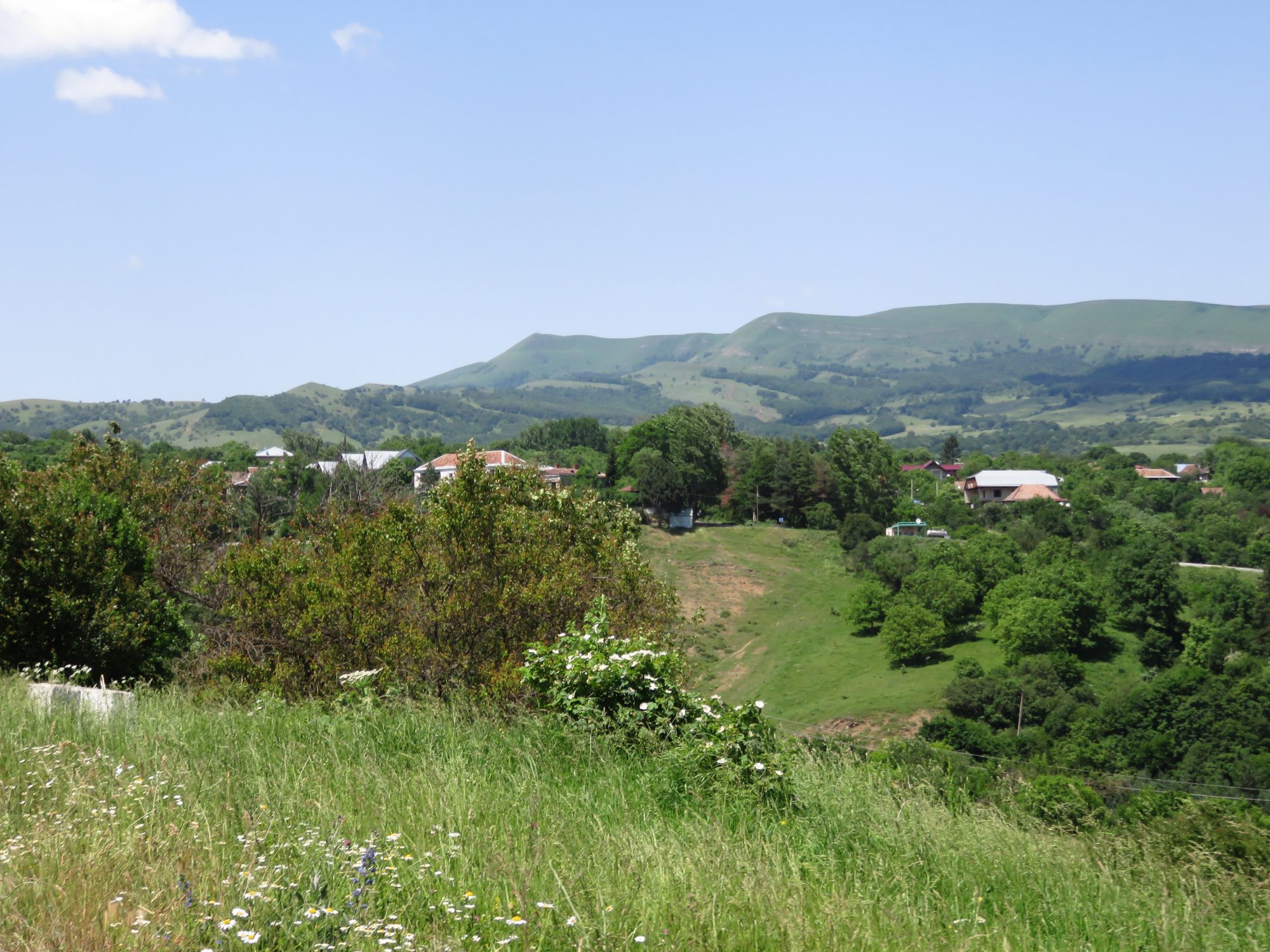 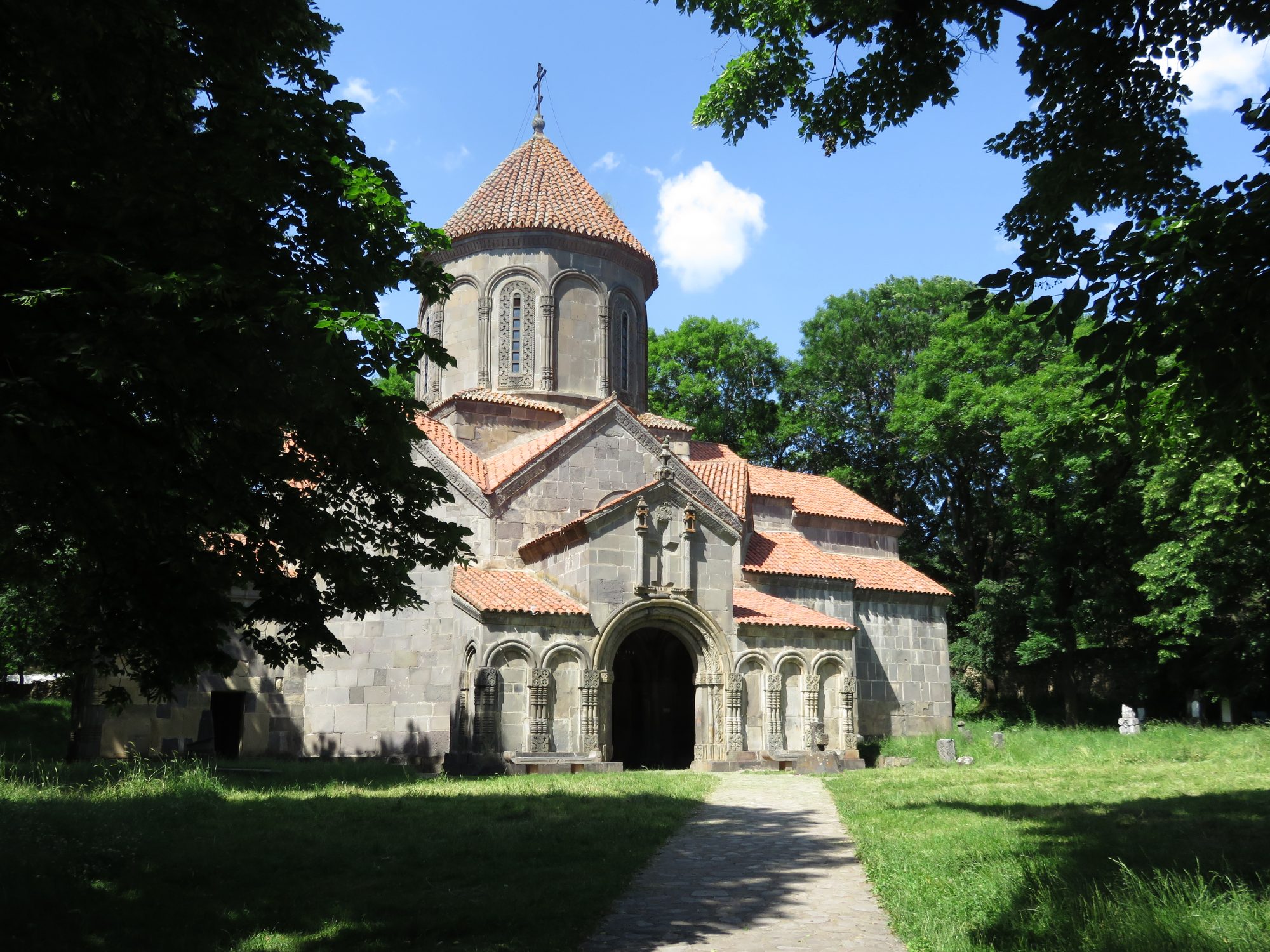 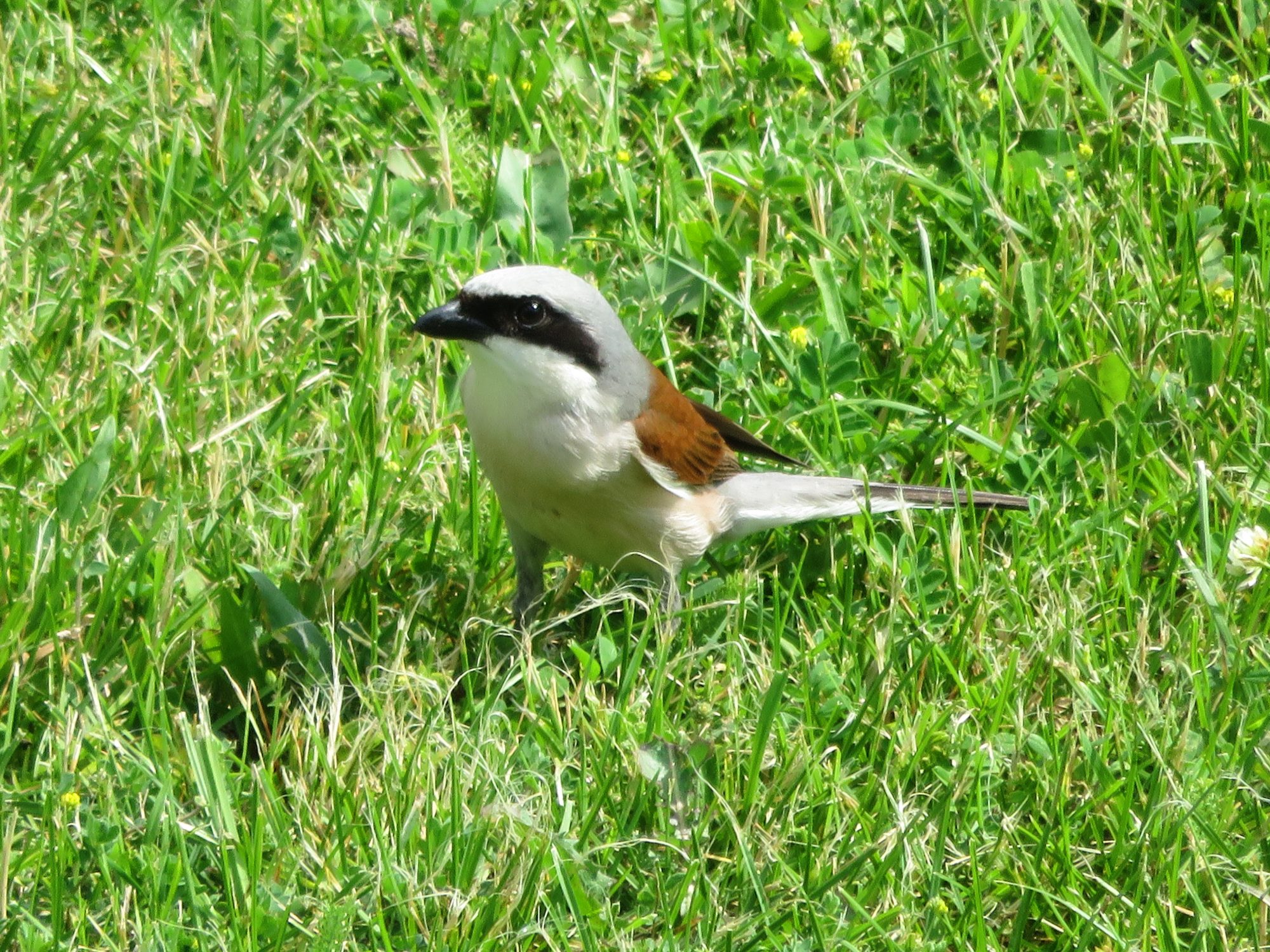 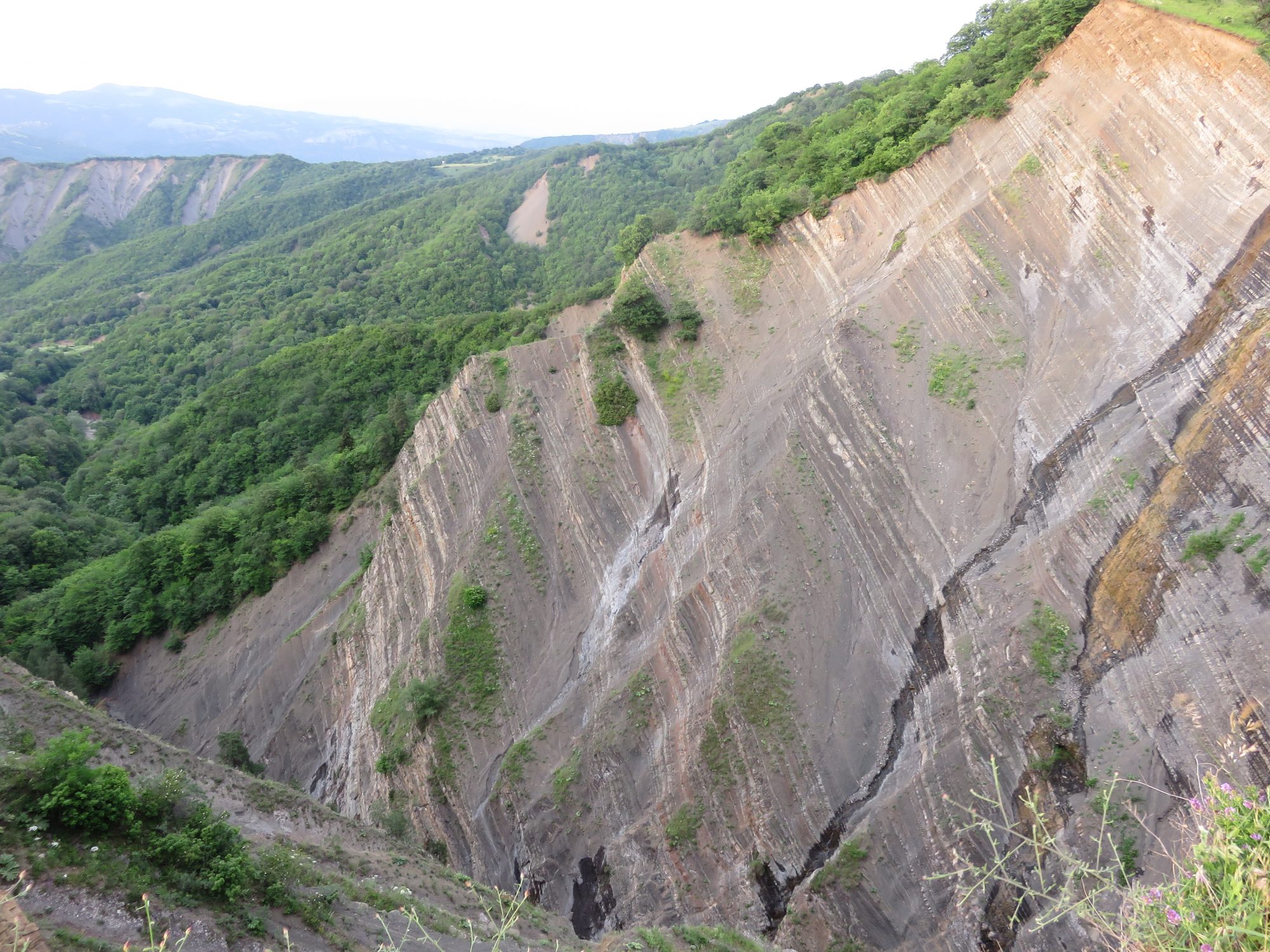 Blessed solitude on Sunday morning, I moved on my own time to the Executive Lounge for coffee and a light breakfast.  It was a sublime pleasure to lean back, sip coffee and read. It was equally pleasurable to take the morning to clean up all the mails and orient for the coming week. By 2 when the Georgians arrived to take me sightseeing, I was ready. They had planned an afternoon of wandering Old Tbilisi and visiting the fort.

Shortly after we walked past the ancient bath houses and started up the path to the waterfall, light rains started. With two rain jackets and one umbrella for six people, we braved the initially light rains. Coming back, the skies opened. The guys took the umbrella and one jacket to go and get the cars while we women ducked into a covered café. Still the rain modified but didn’t cancel the day.

We drove to the funicular rather than walking and took it to the restaurant at the top of the hill. There we sat on a covered veranda enjoying the beautiful view and a delicious meal with the main event of Khachapuri. How do I describe it to you? Start with the idea of an airy, crusty, bread. Spread the bread out to the shape of a dinner plate and turn up the sides to create a shallow bowl. Even better, imagine a whole bread baked in a circle that rises at most a few inches, then separating top and bottom along the circumference. This is a better image as the inside of khachapuri is not crusty on both top and bottom as a pizza crust might be. Now inside the shallow bread bowl add cheese somewhat like cottage cheese but drier and more flavorful, melted inside the bread. This is topped with a raw egg that you mix into the hot cheese to cook. What results is a hot, cheesy custard that you scoop up with pieces of the bread bowl.  Infinitely delicious

We topped our afternoon with a ride on the Ferris Wheel in the park behind the restaurant. As we took the funicular back down to the car, it by-passed the stop at a famous church, so we drove back up. This church is the burial ground for famous Georgians, the least famous of whom is Stalin’s mother.

Mid-week, the agenda has us going out to the town of Manglisi. The Georgians were clear that Manglisi wasn’t quite big enough to be a town, and too large to be a village. They didn’t know what to call it in English and so I said that we weren’t fussy about the size of a town. Manglisi is about an hour and a half ramble up the mountains from Tbilisi. It was as exuberantly green as Macedonia though in a different way. The green was grasses and bushes rather than tall tree. It was quite a lovely way to pass the time. I

In Manglisi we met the woman managing the district office, and several other women in technical positions, including the rarity of a woman technician reading meters, and performing connects and disconnects. We sat on a bench under a tree to talk with here as she walked from house to house. The scenery and those women with great stories to tell would have made the day wonderful and yet there was one more surprise to come.

After we visited the local church and saw the Patriarch’s summer home—very nice—we drove off and turned up a dirt road then parked beside a house. Not having been let in on the surprise, I was delighted when the team announced that it was G’s village house and that we were having a cook out. Everything about it was great. The HR team was there, G’s mom, G2 brought a carload of people and with the perfect weather, it was a glorious feast.

Toward 7 I got a little nervous as I needed to be in Tbilisi with my laptop set up to do a webinar. G2 said he’d take me back and G sent us down a different road than the one up because the second road was shorter. Well, it may have been but it was also washed out in many places. We crawled over deep ruts and around construction vehicles. We got to the outskirts of Tbilisi about 8:30 and hit unexpected traffic. With that, we pulled up at the hotel at 8:50 and I dashed to do the webinar. Thought it unwise to share with the client how close I’d come to being late.

I had another new experience later in the week, when rain, once again, forced us indoors. The guys had picked a pub on the river but the driving rain drove us inside. At this feast, we had kebab, Khinkalli, and all the other wonderful foods I’ve come to know and love, making drink the new experience. I ordered a dark beer and the guys also order me Kvass. When the waiter arrived, it looked like I was getting two dark beers, much to the amusement at the guys the next table over. Kvass looks exactly like dark beer but it is something else entirely. Kvass is made from rye bread, sugar, yeast and lemon although when it all ferments, the resulting alcohol is less than one percent. Kvass tastes a bit like Coke with lemon, though not exactly. I liked it.

With all this fun, you might think I didn’t work, but I did. Since it was light until around 9 pm, there was plenty of time for activities after work. Friday after they dropped me at the hotel at 5, I decided to take the cable car up to the fort and muck around up there for a while. Mucking, for me, was doing things that were likely a tad unwise for a person of my advanced years. I climbed up the fortifications and crumbing walls. It required a bit of climbing and getting good handhold to hoist myself up. The steps, where they still existed were steep, narrow, and missing bits, but I won the high ground in the end.

Quite pleased with myself, I made it down as well without breaking more than a finger nail. From there I went to the statue of Mother Georgia and took a look at the botanical garden. Realizing I’d rather kicked my own butt doing that in the heat, I rode the cable car back down instead of walking and had the great good sense to buy some water. From the cable car it was only about another 20 minutes to the hotel through old Tbilisi.

That was all a perfect wrap up before the saga getting home. Since my drive was set to pick me up at 1:20 am, there was no use trying to sleep. I simply stayed awake until the plane boarded for Munich at 4:30 am. Delightfully I did promptly pass out and woke for landing. Until I got through security, etc. it was only another hour until my flight to Frankfurt. Passed out on that one too but since it was only 45 minutes, I was still quite behind on sleep. In Frankfurt I visited my favorite airport bakery for a pretzel and hunkered down to wait for my flight to Philly. If you think that was a crazy series of flights, wait until you hear about the connections on my next trip. You’ll get that in the next installment of “The Further Travels of Clare—Nigeria, Chapter 2”

Sitting now in a random restaurant awaiting my venison. Yes, I am eating my way through another country another time.…