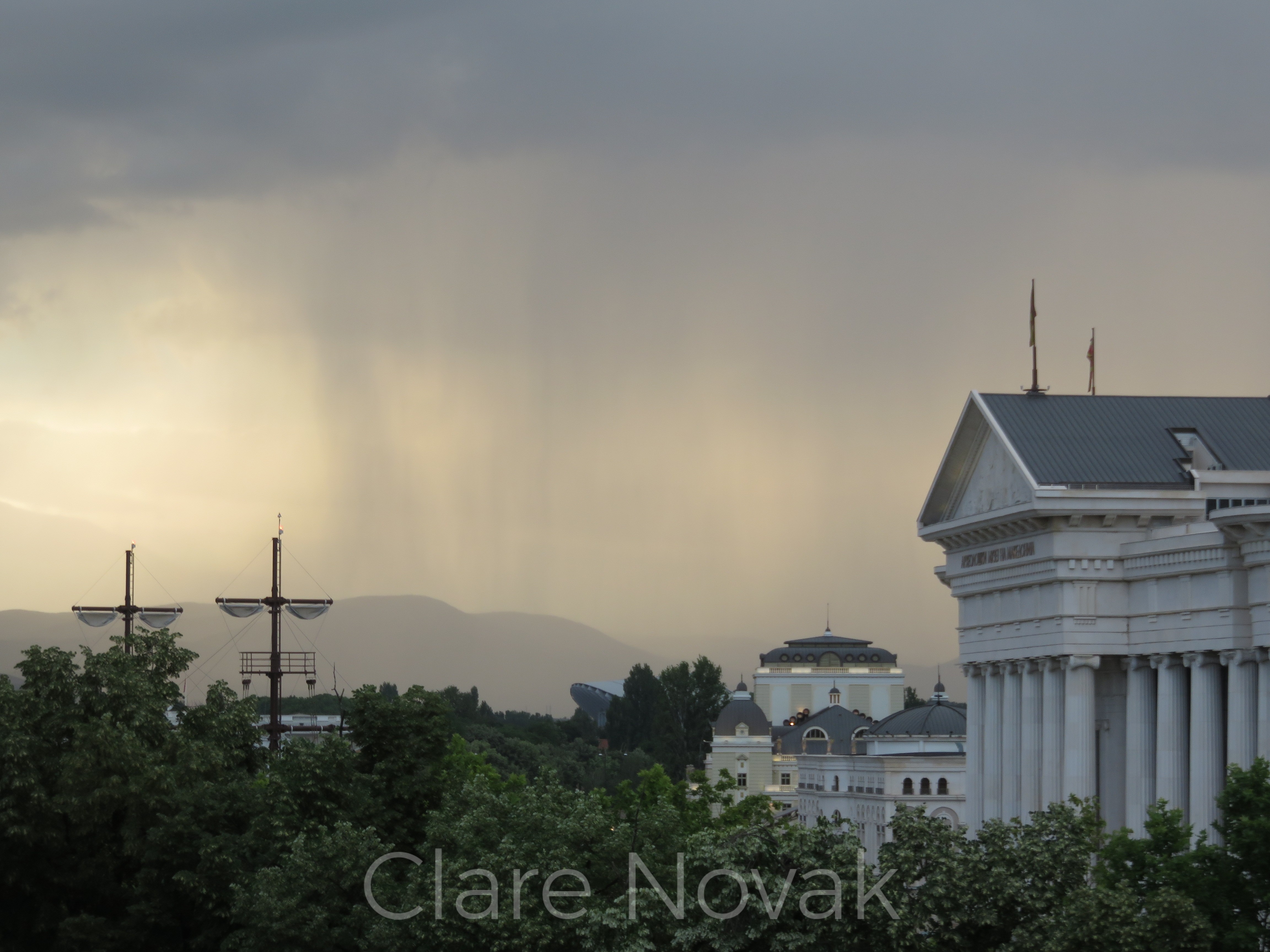 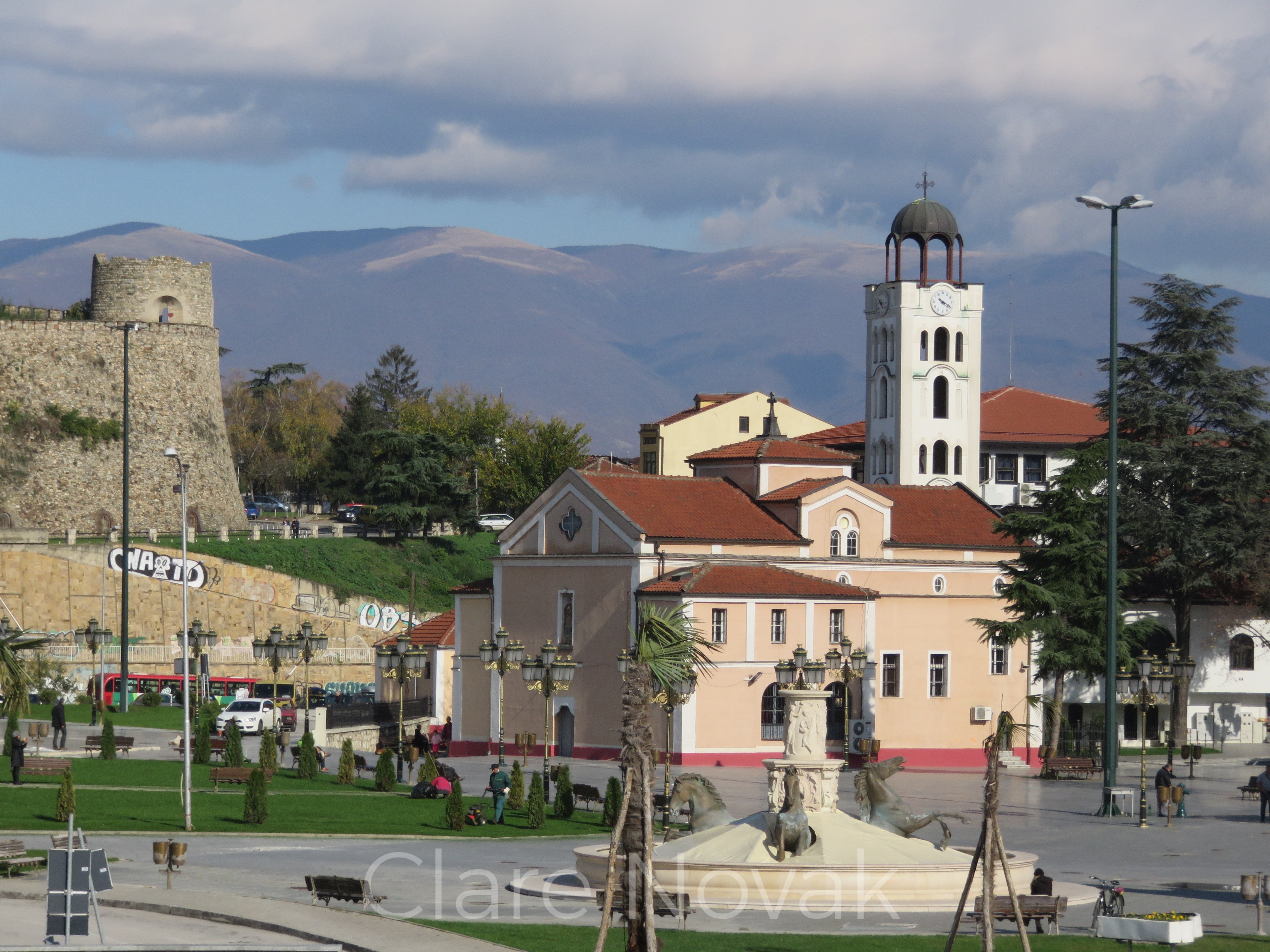 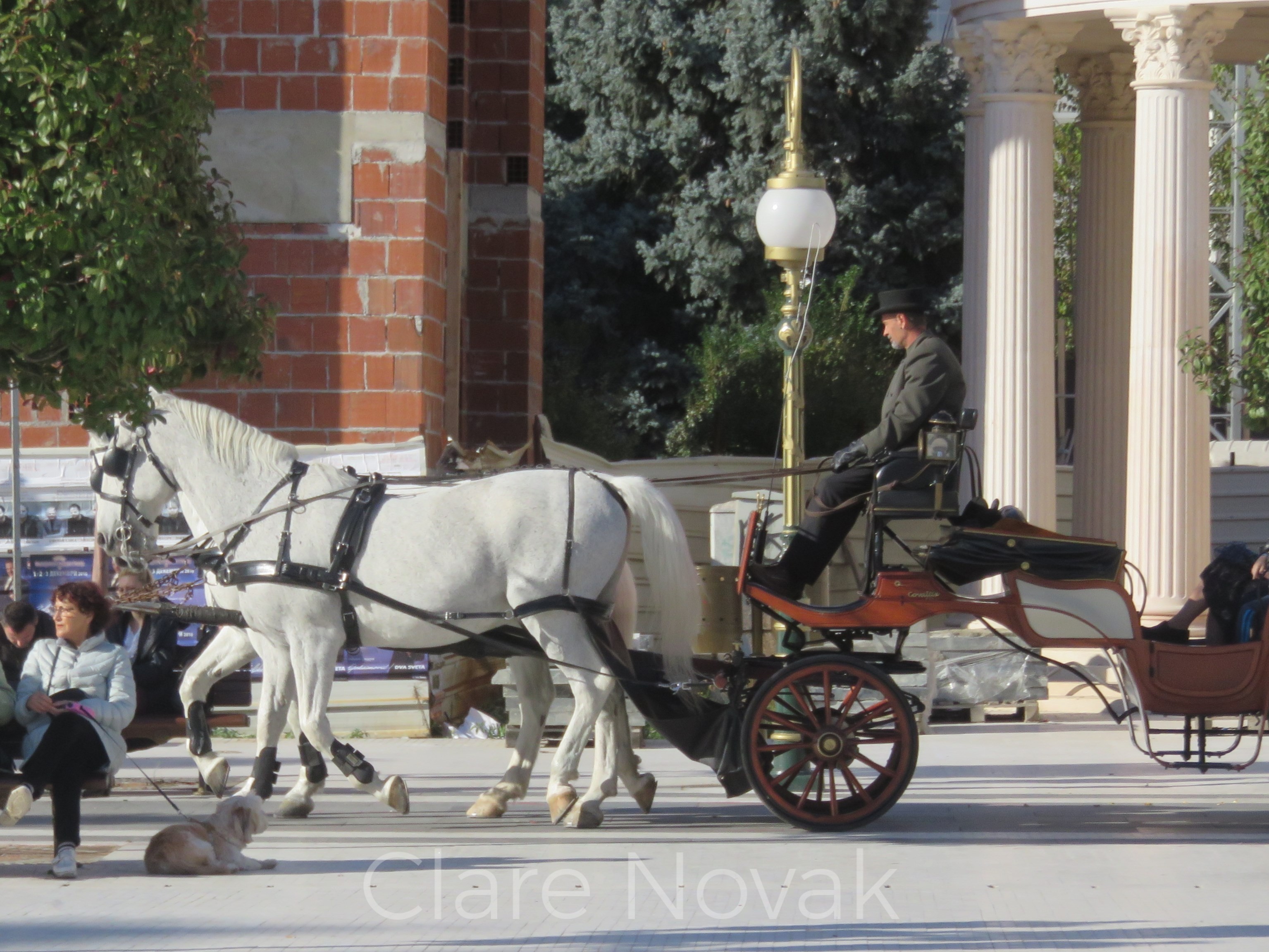 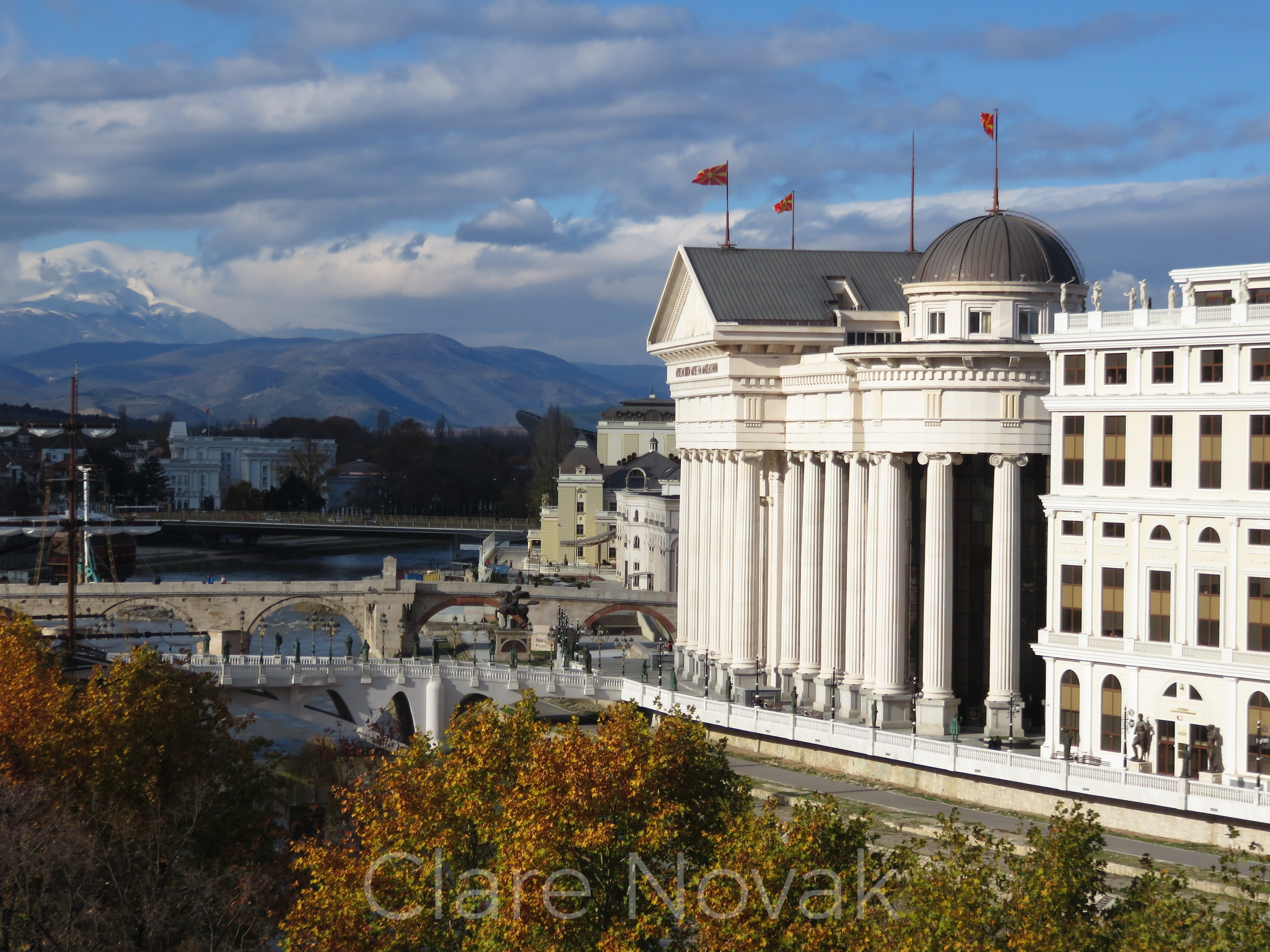 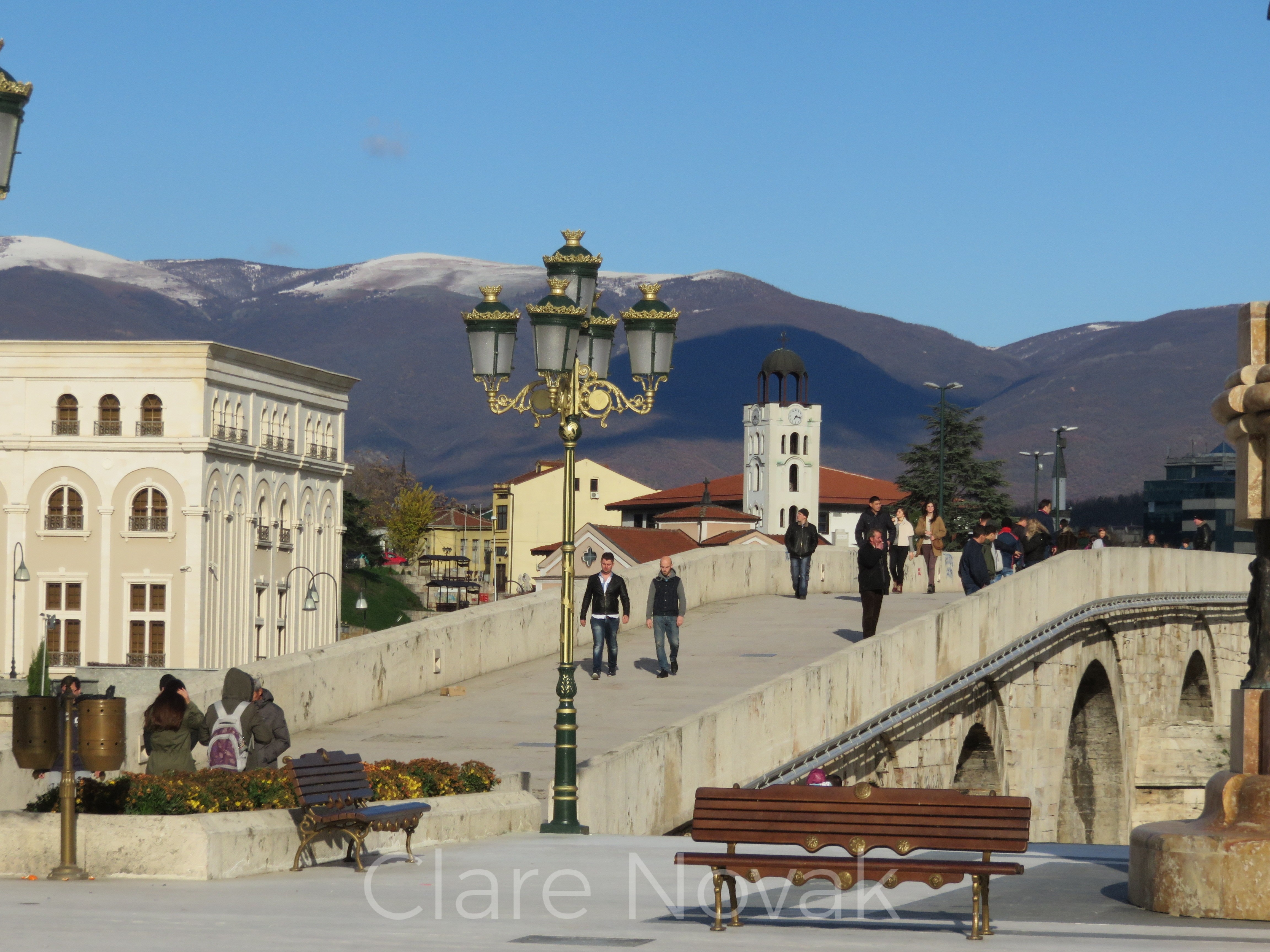 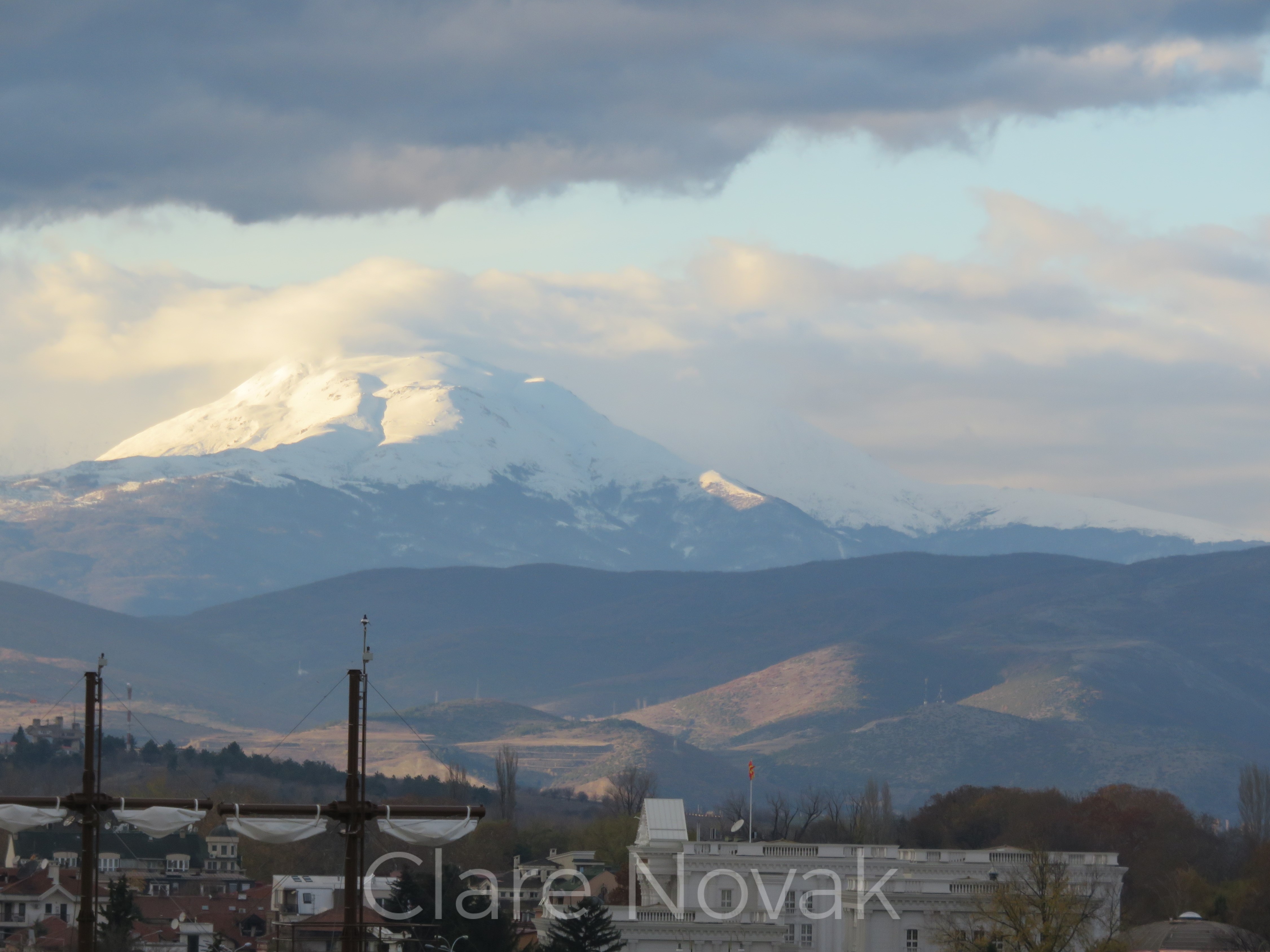 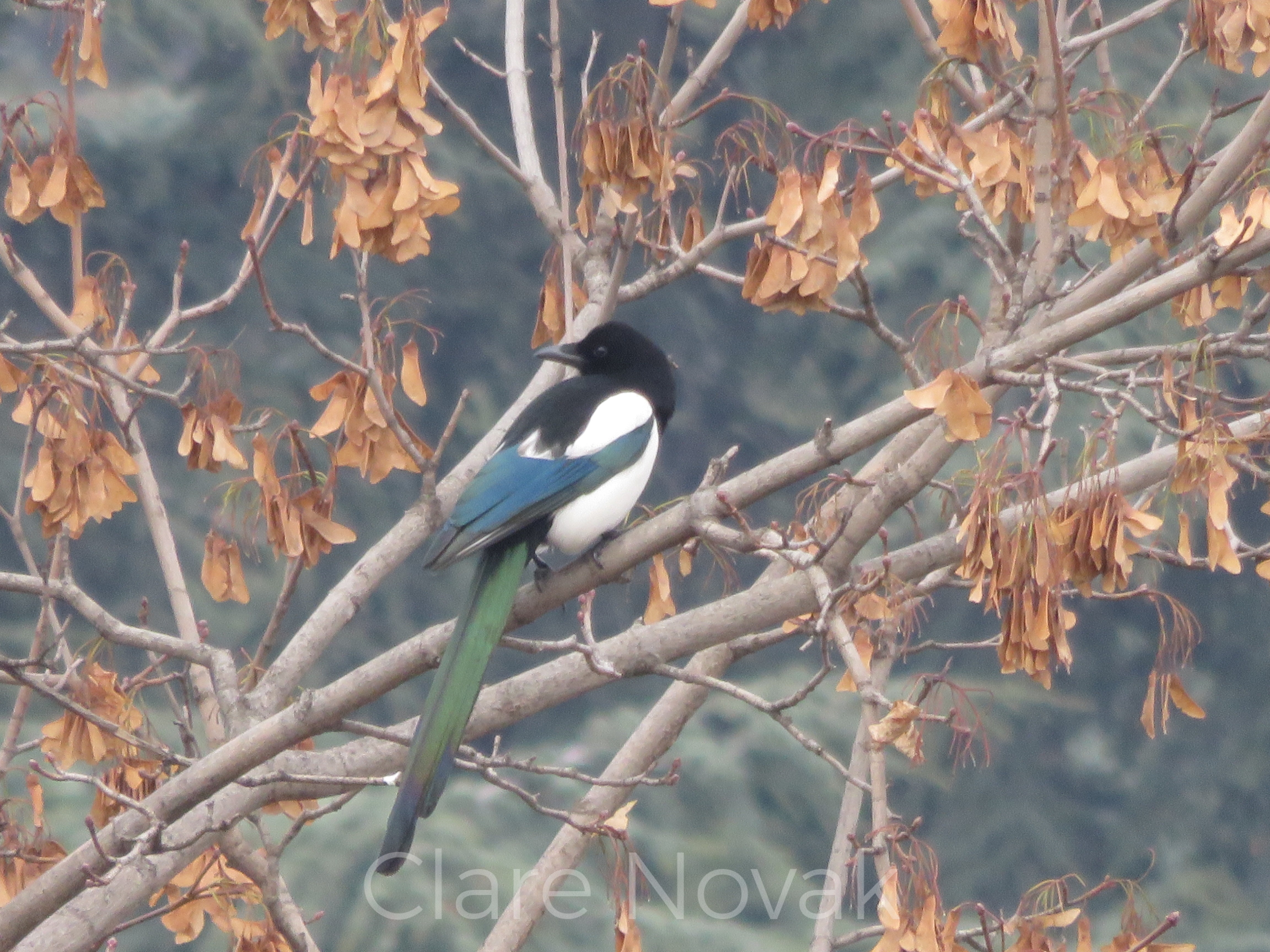 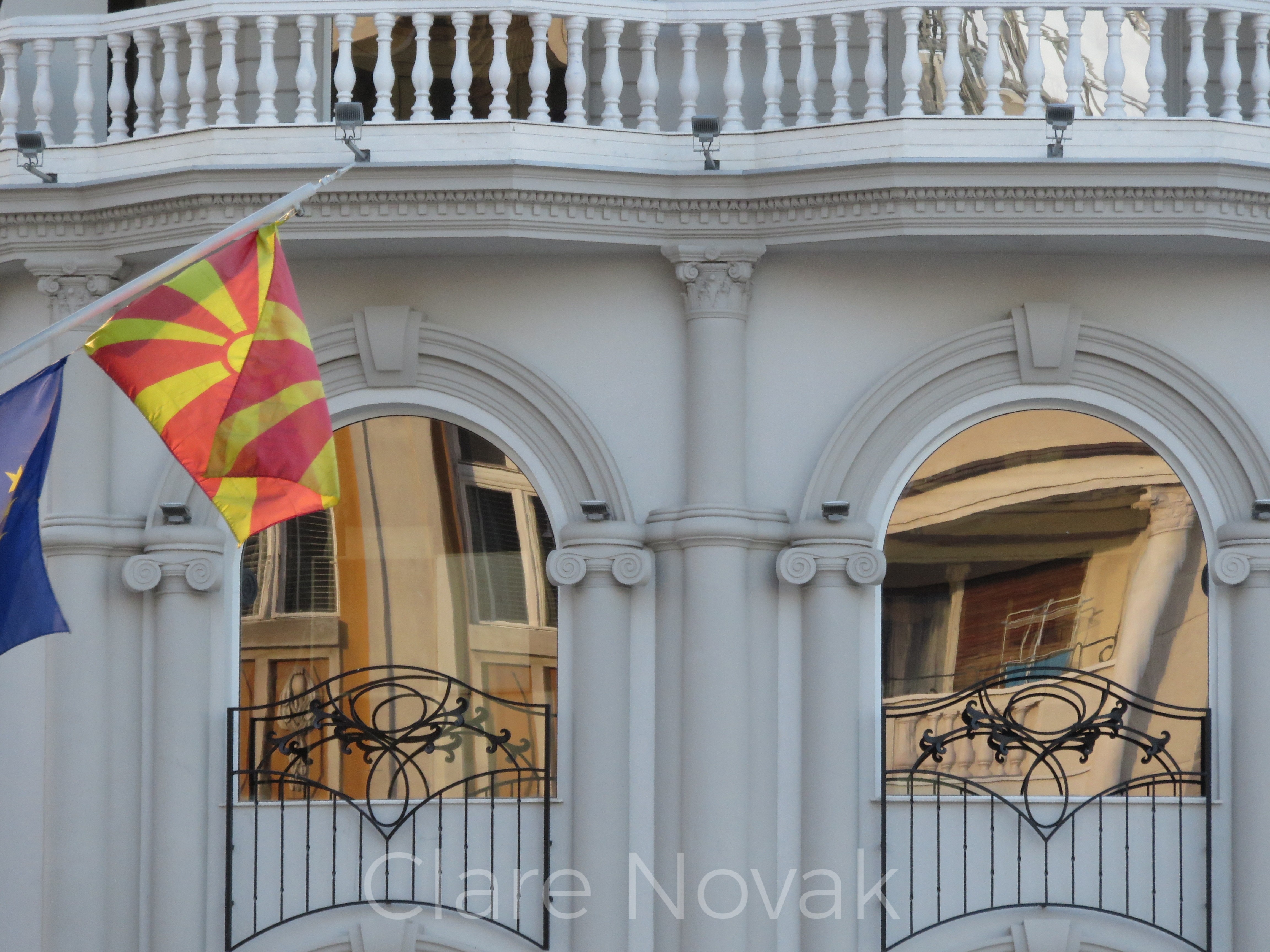 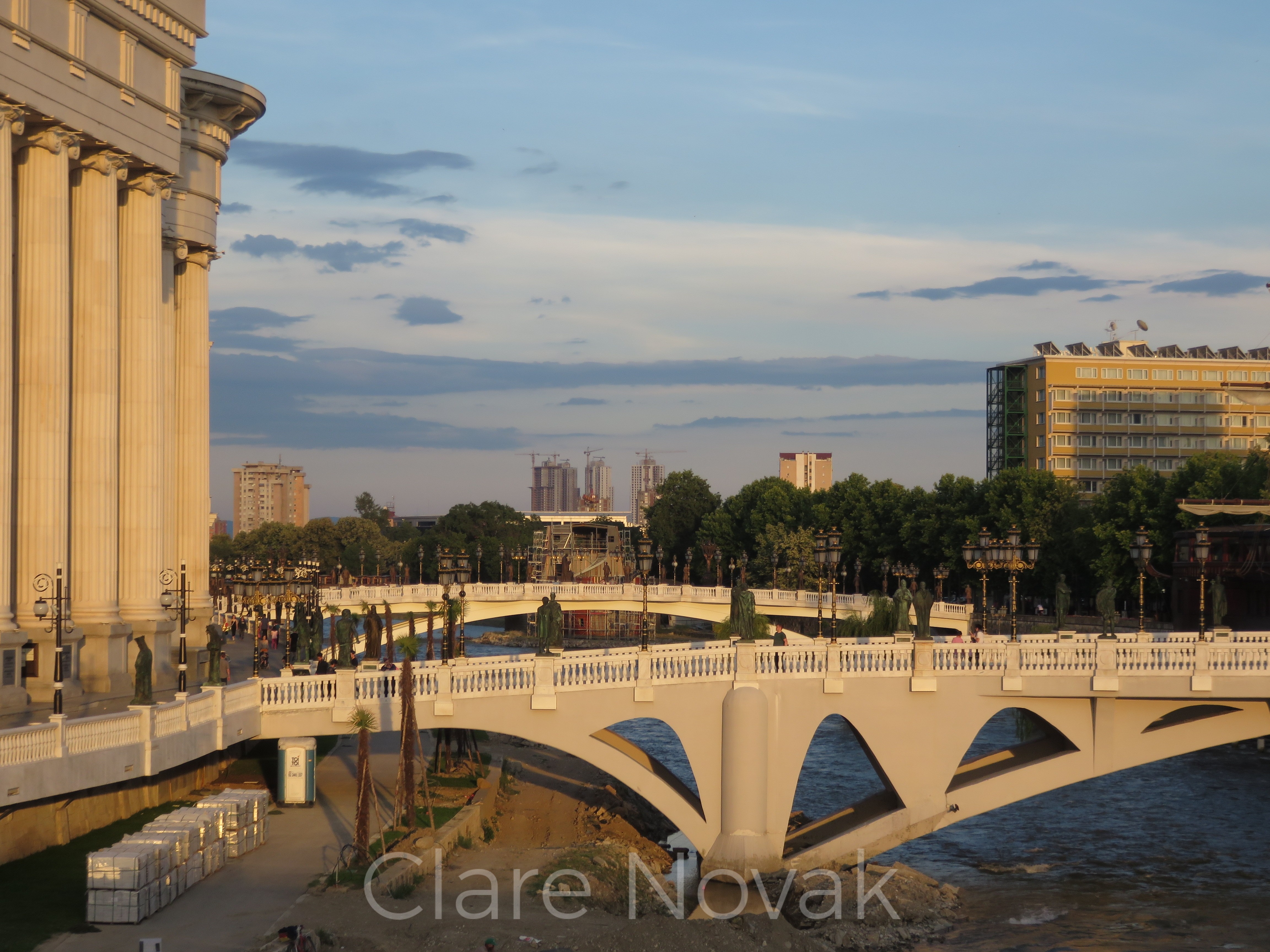 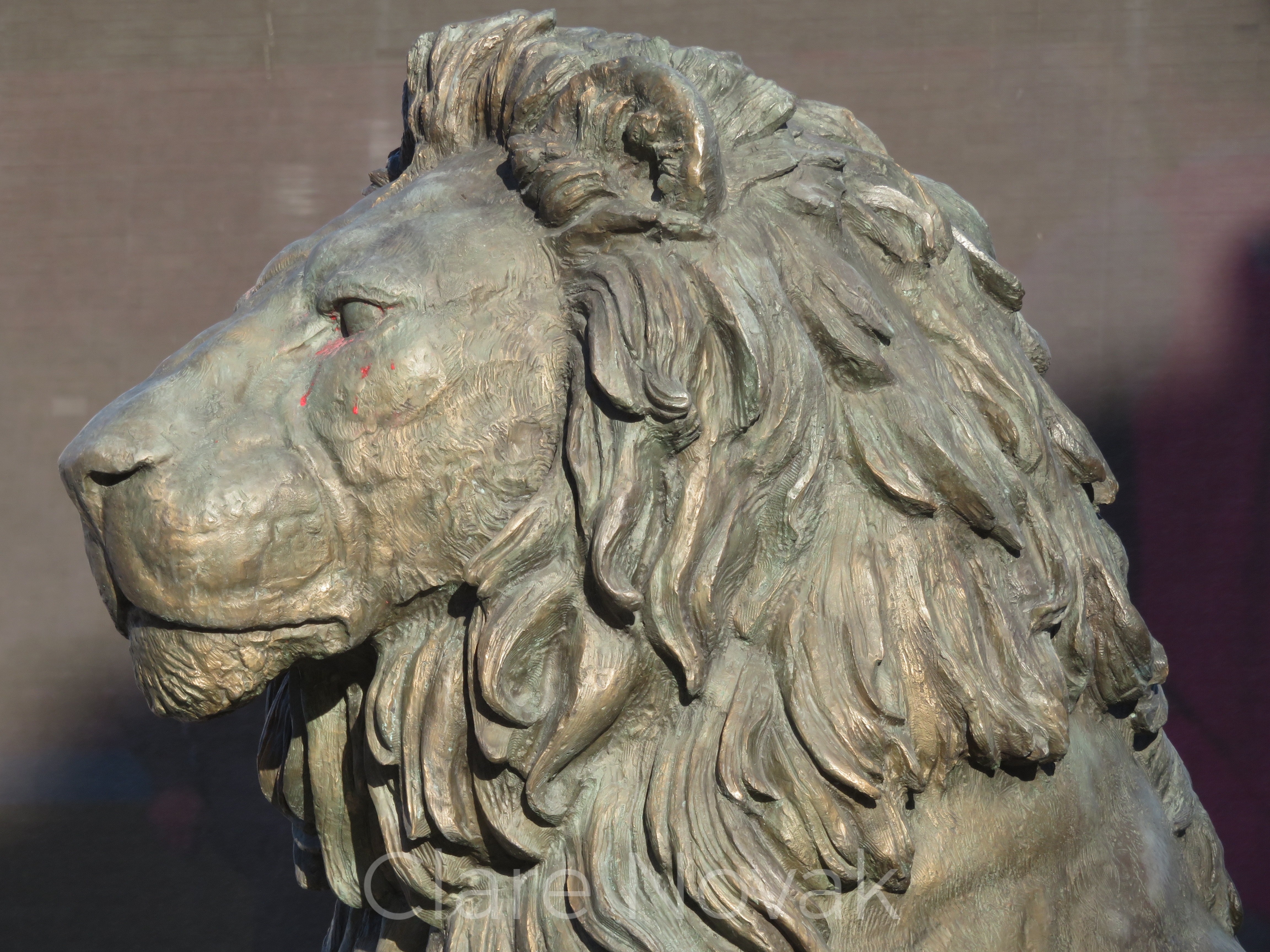 Macedonia’s food was delightful as well. It was a treat to have palachinki, crepes with sweet cheese, smothered in tart cherry compote.  There is everything to love about good bread, bistro and wine by the river cultures. The foods and the Cyrillic alphabet were more familiar to me. Having been in Ukraine, I could puzzle out important words like restaurant and souvenirs. Their tourist specialty is silver filigree jewelry and I bought some for gifts as well as for me. With the exchange rate, an excellent meal with wine was around seven dollars. Lunch of a pork “pizza” was under three.

Over in old Skopje, I discovered the most marvelous tailor shops. The fabrics were rich and beautiful. Perhaps next trip, I’ll take a style photo and have something made. While I was entranced by the princess ball gown fabrics it would make no sense to go that route as there are no grand balls scheduled on my calendar. A perfectly tailored suit on the other hand….

Also, in old Skopje is a church famous for its woodwork. To call what I saw wood work is to either elevate wood work to the status of Michelangelo’s David or to call David “just another statue.” The woodwork is three-dimensional sculptures, not merely work cut in relief. The pillars are vined sculptures twined around air with figures nearly floating off the leaves. If you can picture the Chinese ivory ball sculptures with balls of animals and plants floating into an infinity of smaller and smaller balls, you will have some idea of the intricacy of the wood work. Unfortunately, this craft has gone nearly extinct in Macedonia as has the tile work that produced the historic mosaics throughout the country.

Mother Theresa, soon to become Saint, lived for a time in Skopje and there is a modest, as you might expect, museum dedicated to her. When she becomes sainted, it will double the number of famous people from Macedonia I can name—Alexander the Great and Mother Theresa. This isn’t from a lack of famous Macedonians but rather my lack of history. I also learned that George Balanchine was not Russian, as I assumed, but Georgian. In my defense, he did “Russianize” his name.

Both countries are places I will gladly spend more time. When I visit Jordan in January, it will be my 25th country.

Yesterday over the Christmas meal, I remembered to relate a story from Georgia. During a sumptuous meal there were several grilled meats and as I sampled, I asked the Georgians what meat it was. There was a discussion in Georgian after which T reported, “We don’t know what the name in English.” More discussion followed which she summarized for me. “It is teen-age cow.” Ah, veal. Later when chicken arrived, I asked, “Is this teen age chicken?” “It is chicken. We do not know its age.”

The apartment concierge recommended visiting Hala Koszyki as it is one of the few remaining old markets. Given that endorsement…

Vienna deserves so much more time than the flight layover allowed. By the time I arrived at the hotel it…