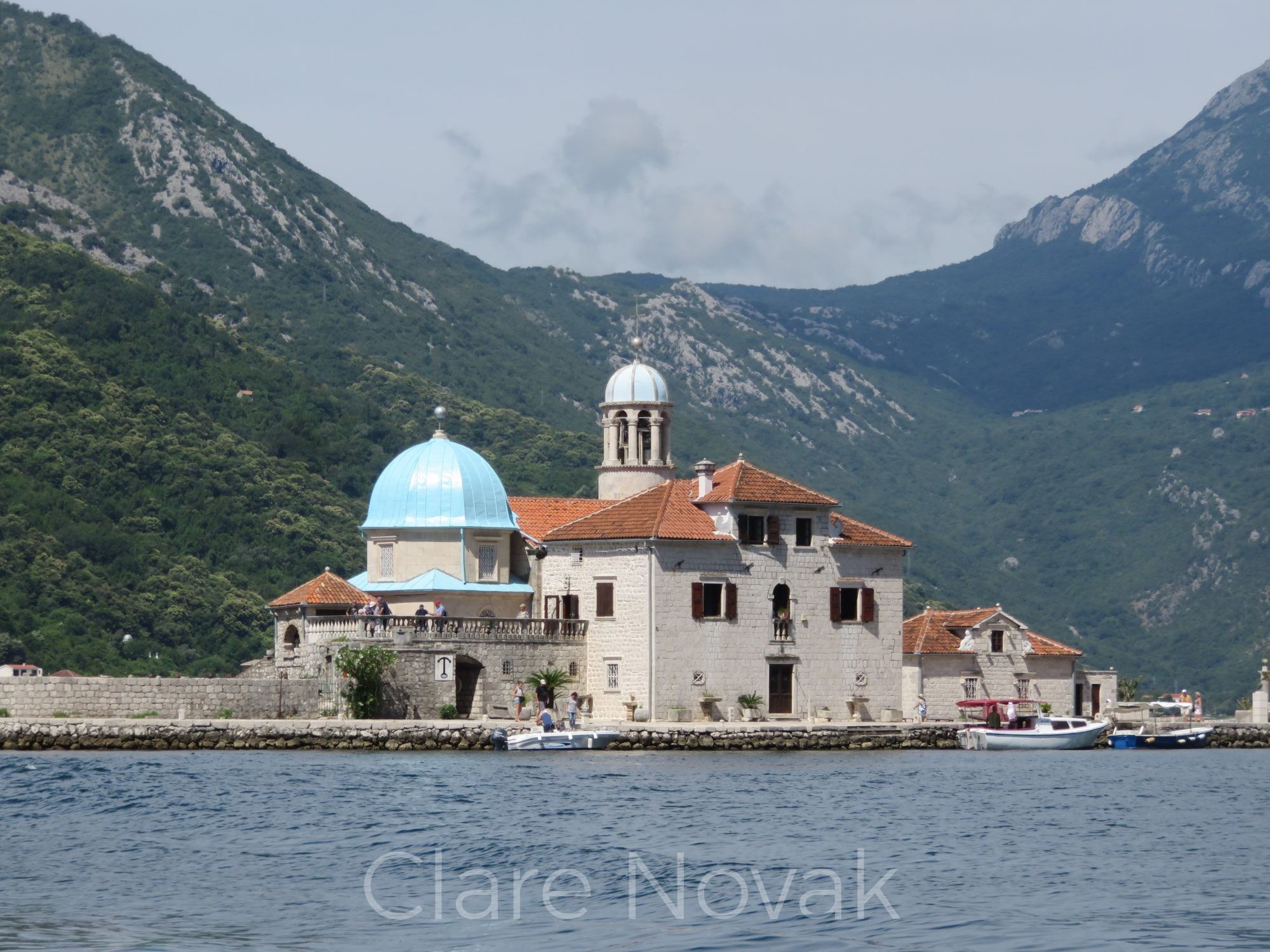 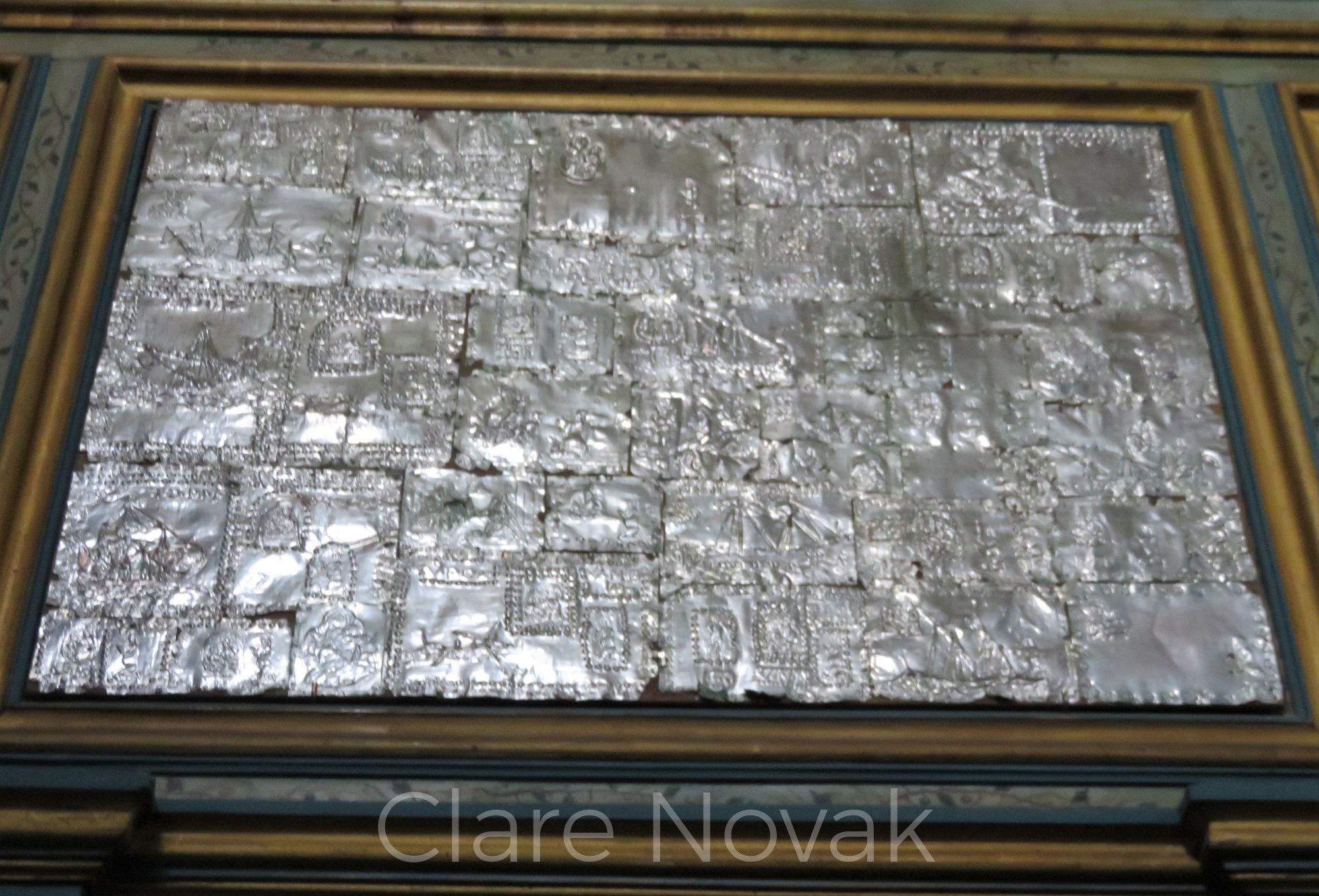 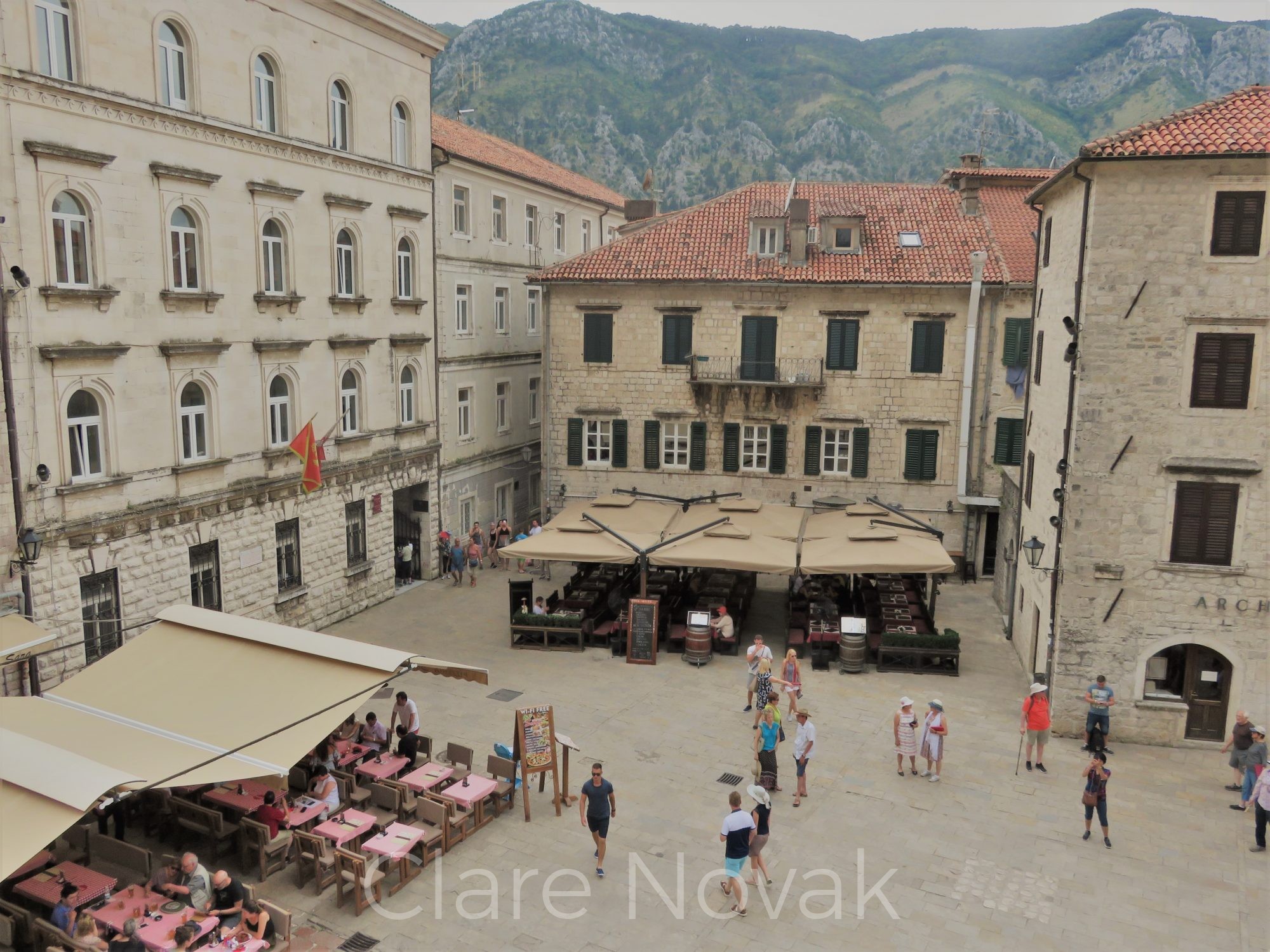 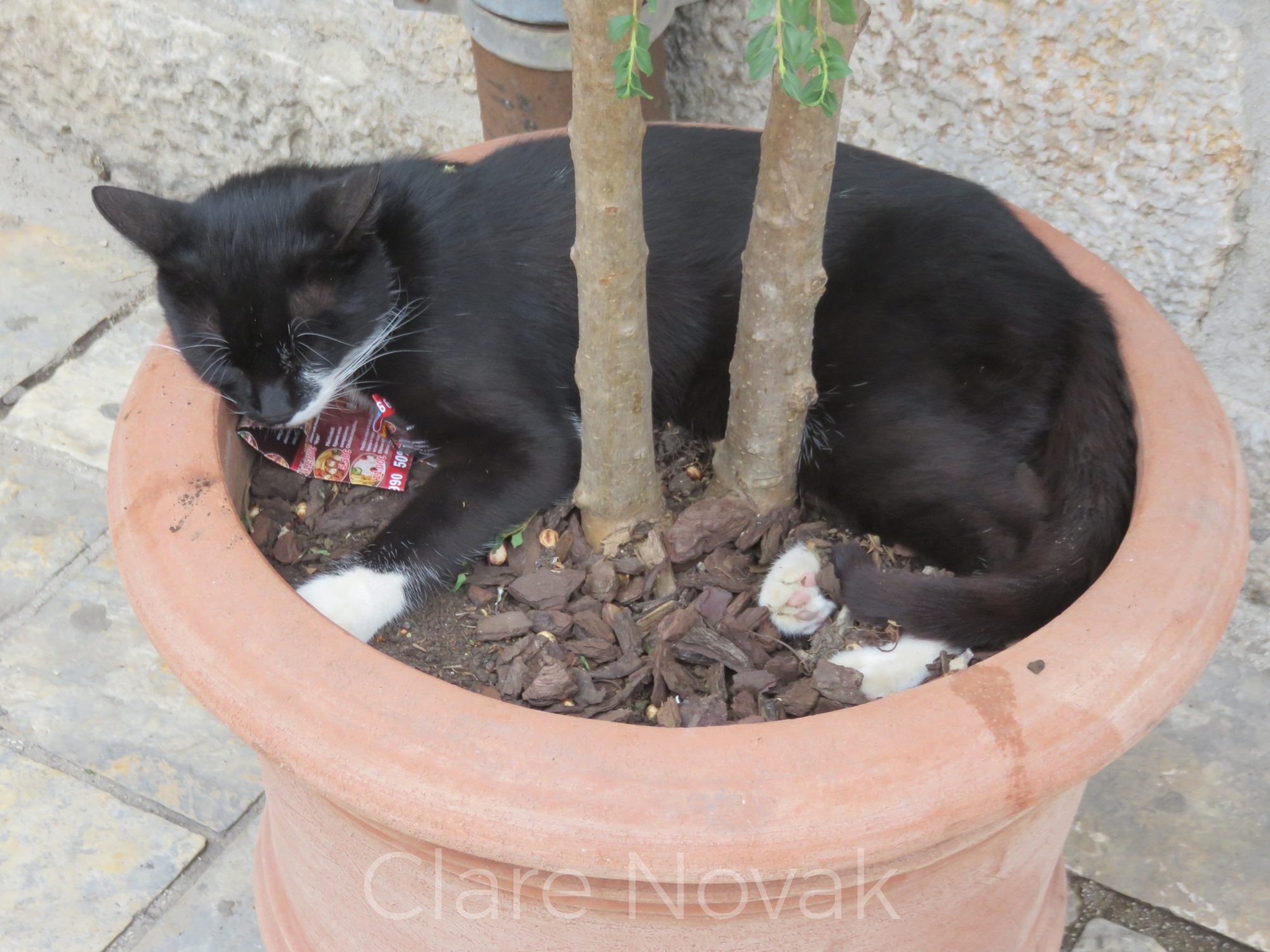 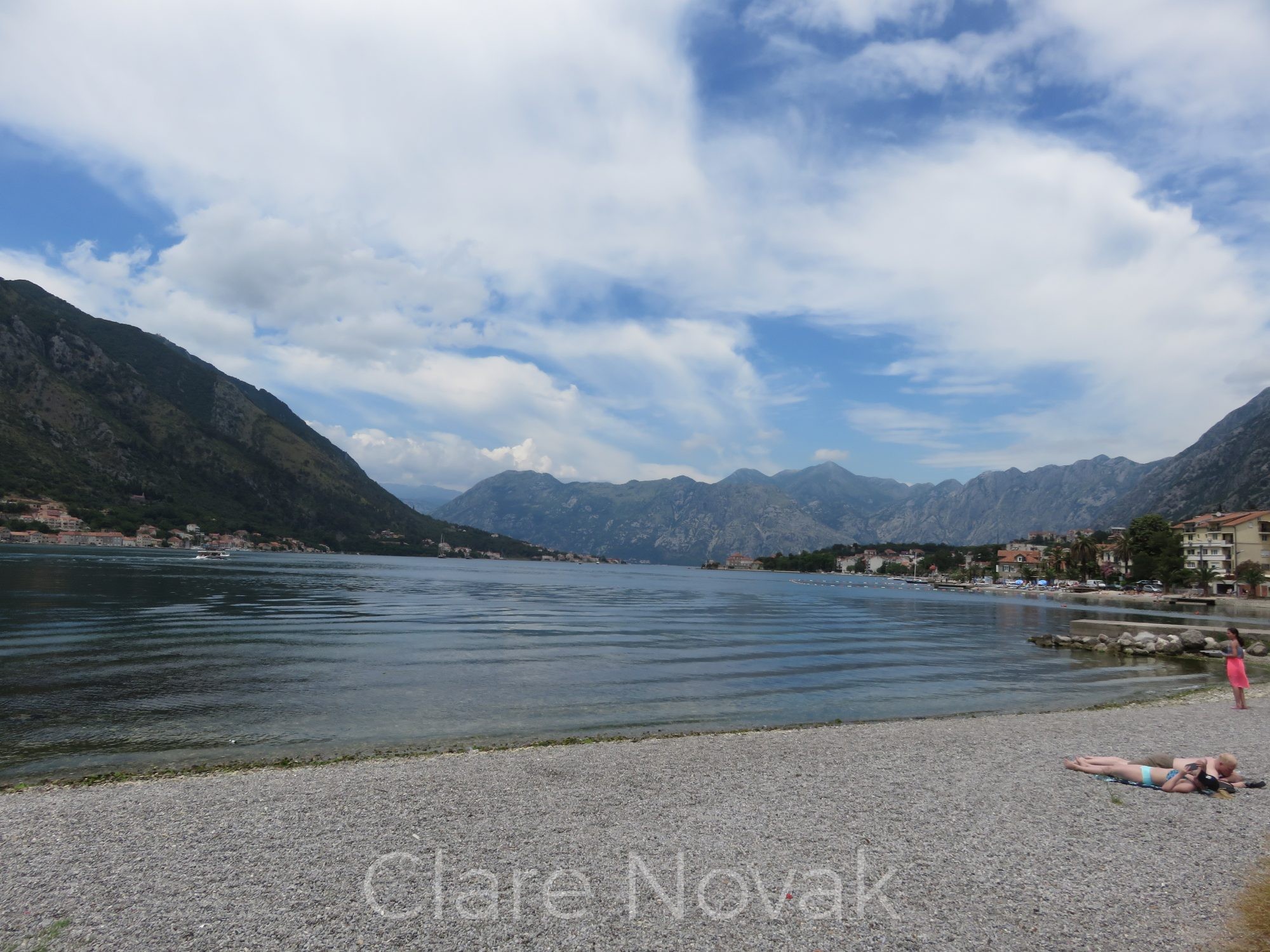 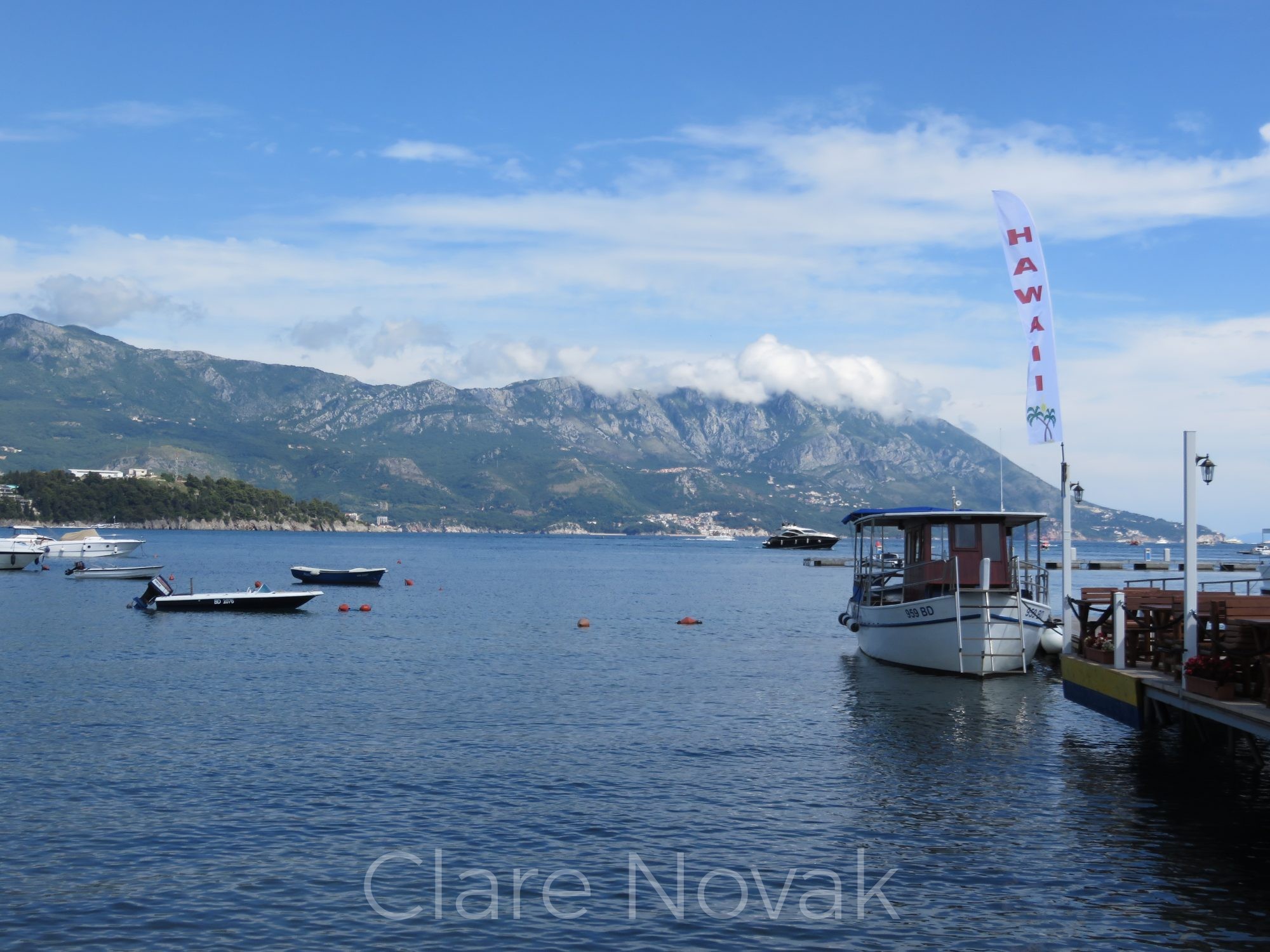 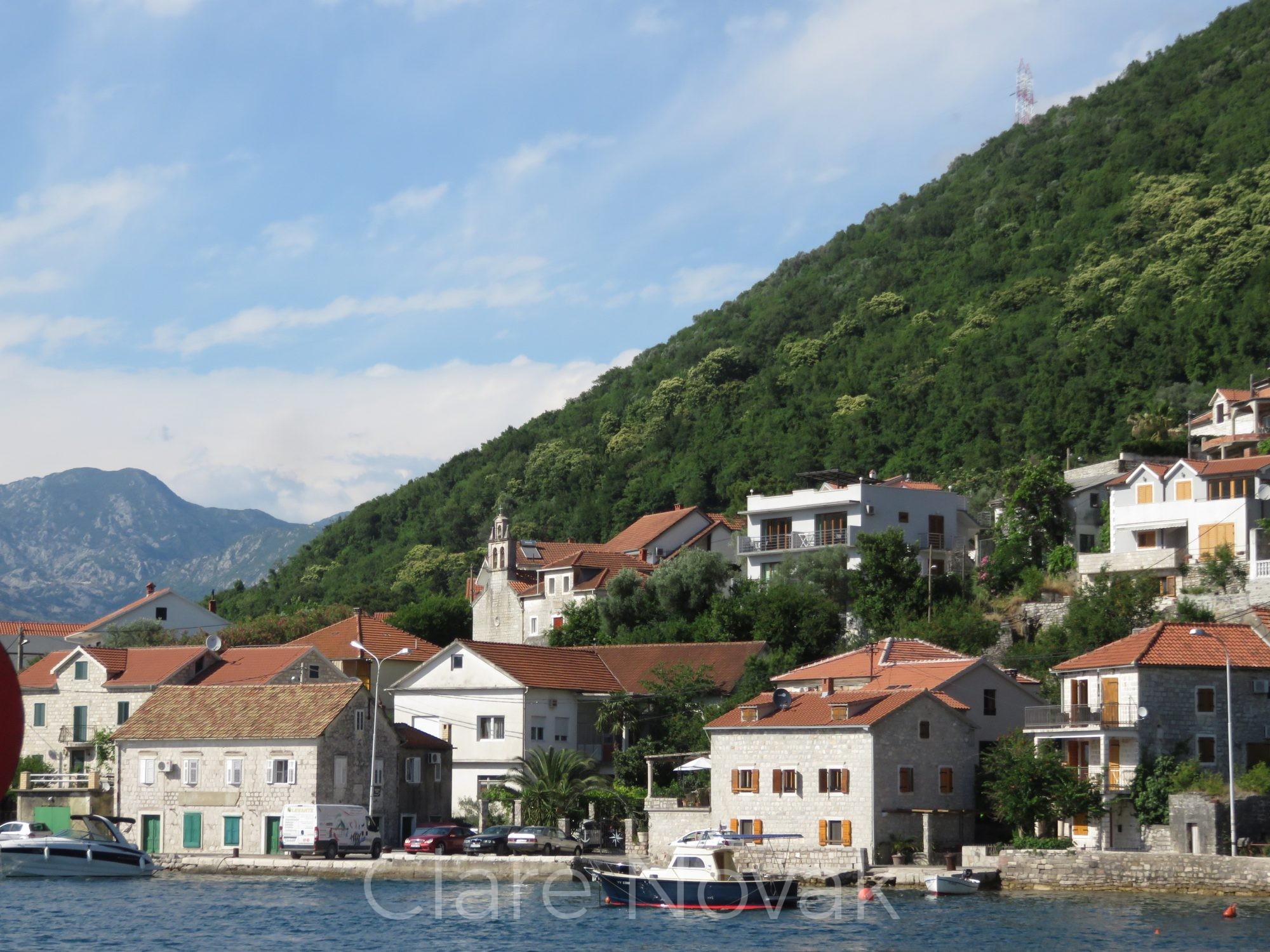 I remember some time back telling friends about visiting Macedonia and someone replied that she’d looked up Montenegro and found it to be the least visited destination for Americans. With that in mind it amused me to book a day trip to Montenegro and get the t-shirt too. It is as fabulously beautiful as Croatia, unfortunately there is no love between the two as the Montenegrins, who had been a large part of the Yugoslav army, attacked Croatia during the sorting out of independences. For that reason, depending on who is working the border on any given day, the crossing can be easy or a total nightmare of bureaucracy. We were lucky.

As we drove the coastline, the view of an exquisite bay opened. The guide explained how the cities and towns around the back bay had remained independent during many wars and regimes by closing the bay with a heavy chain. Again, Game of Thrones fans will see where George R.R. Martin got his ideas, history, not imagination. By a lucky star, the guide announced that we would stop in Perast, as several of the group had prepaid to see the island church. There were two islands and two churches. One island natural and housing a private Serbian Orthodox church and the other a created island with a church to our Lady.

Legend says that a fisherman out in the bay saw an icon of Mary, probably washed up from a ship wreck. Based on the icon, the community decided to create an island and build the church. Every year, a flotilla of boats, each carrying a stone, circles the island and adds its stone to the island. While the island has long since been large enough to build the small church, the tradition continues.

Inside the church museum are some small treasures. The church has a Murano glass chandelier and examples of a tradition in the region. People who prayed for something and had the money to do so, would have made a picture of their request embossed on a small square of silver. Over the years, these added together in each church, creating silver walls.

The embroidered annunciation was difficult to find and worth seeing for the skill of the creator. A woman of the town, in the tiniest of stitches, began embroidering this work of art from threads of silk her husband, a sailor, would bring back from his travels. Unfortunately, the sea took him and when she no longer had silk, she used her own hair for the hair of the angels. The angels began with her blond hair and over the 29 years it took her to finish, their hair too became gray.

My thanks to the Brazilians who booked this side trip. Elena, our guide told us that usually, the tour just passed through. How sad that would have been.

Kotor, another UNESCO heritage site, was the next stop. Kotor too is a walled city, though significantly smaller than Dubrovnik. The natural beauty of its place on the bay was quite remarkable. Wisely, here I did not climb the walls, literally or figuratively. The walls here not only surround the town but head straight up the mountains to the fort at the top. While there is a church about half way up that is said to have a wonderful view, it would have taken the entire time of our stop to get there and back and at a good pace up uneven stone steps. Like all these towns, Kotor had its churches, museums and shops. Kotor, for those of you who love them, has opted to become a protector of cats. The street cats here are a well fed, healthy and sleek lot of cats, who, like all cats, feel they own the place and merely keep people as servants.
While Dubrovnik has wisely limited the number of cruise ships and where they can dock, Kotor has not. Unfortunately, that means Kotor at times can be unduly crowded so the guide recommended we wait until Budva to have lunch. A few years back, Dubrovnik experienced human gridlock in the Old City and immediately decided enough was enough. So, for those of you who travel, take the hint and go to Dubrovnik by land.

Budva is famous for three things, a road featured in a James Bond movie, a long beach where music festivals are held and laundering Russian money. Although I knew if I ate lunch first I probably wouldn’t make it over to the small, old city, I ate, as it was late afternoon and I was starving. Paul, an Aussie, and Jane, his wife invited me to join them. The conversation was so interesting, we never did walk over to old Budva. Jane had worked in the Chinese Ministry of Industry but never joined the party. She was sent on delegations to North Korea and it seems they trust no one, not even the Chinese. Their party, like everyone else was continuously escorted. One time she mentioned she’ like to ride the subway. The handler told her they would arrange it. The next day the Chinese delegation was able to ride all of three stops and the North Koreans had completely closed the subway to anyone else.

On the return trip, we saved 56 kilometers of driving by taking the ferry across the bay. Nine minutes, great views, saving an hour-what’s not to love. I had the tour drop me back in Old City, Dubrovnik rather than my hotel. While there, the Defenders of Dubrovnik was open, so I wandered in. Also in the exhibit hall was a one-man art show. Dang, the guy was good and he deserved the prices he was asking but they were well above my pay grade.

And a final word from the Balkans:

Blessed solitude on Sunday morning, I moved on my own time to the Executive Lounge for coffee and a light…