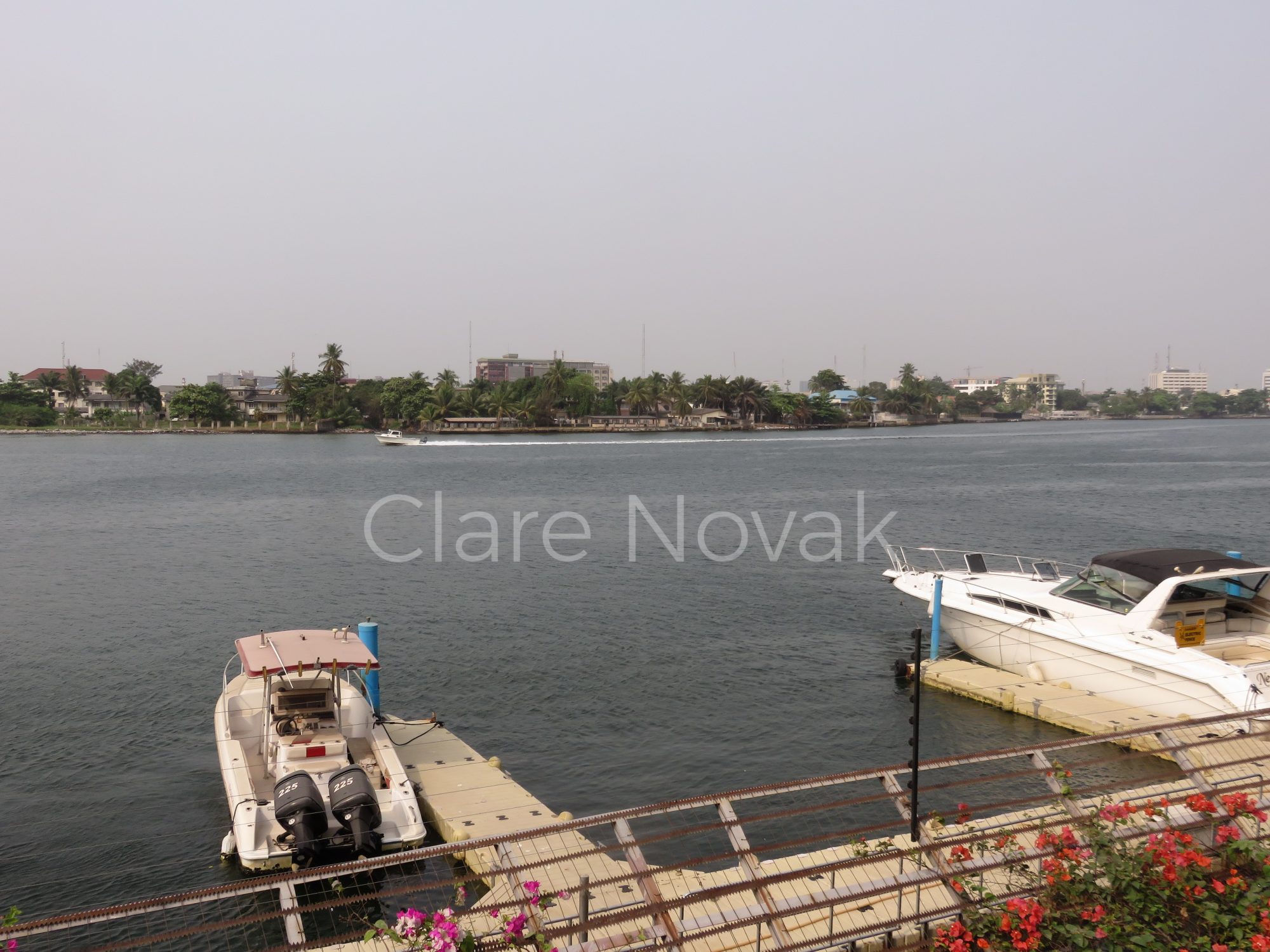 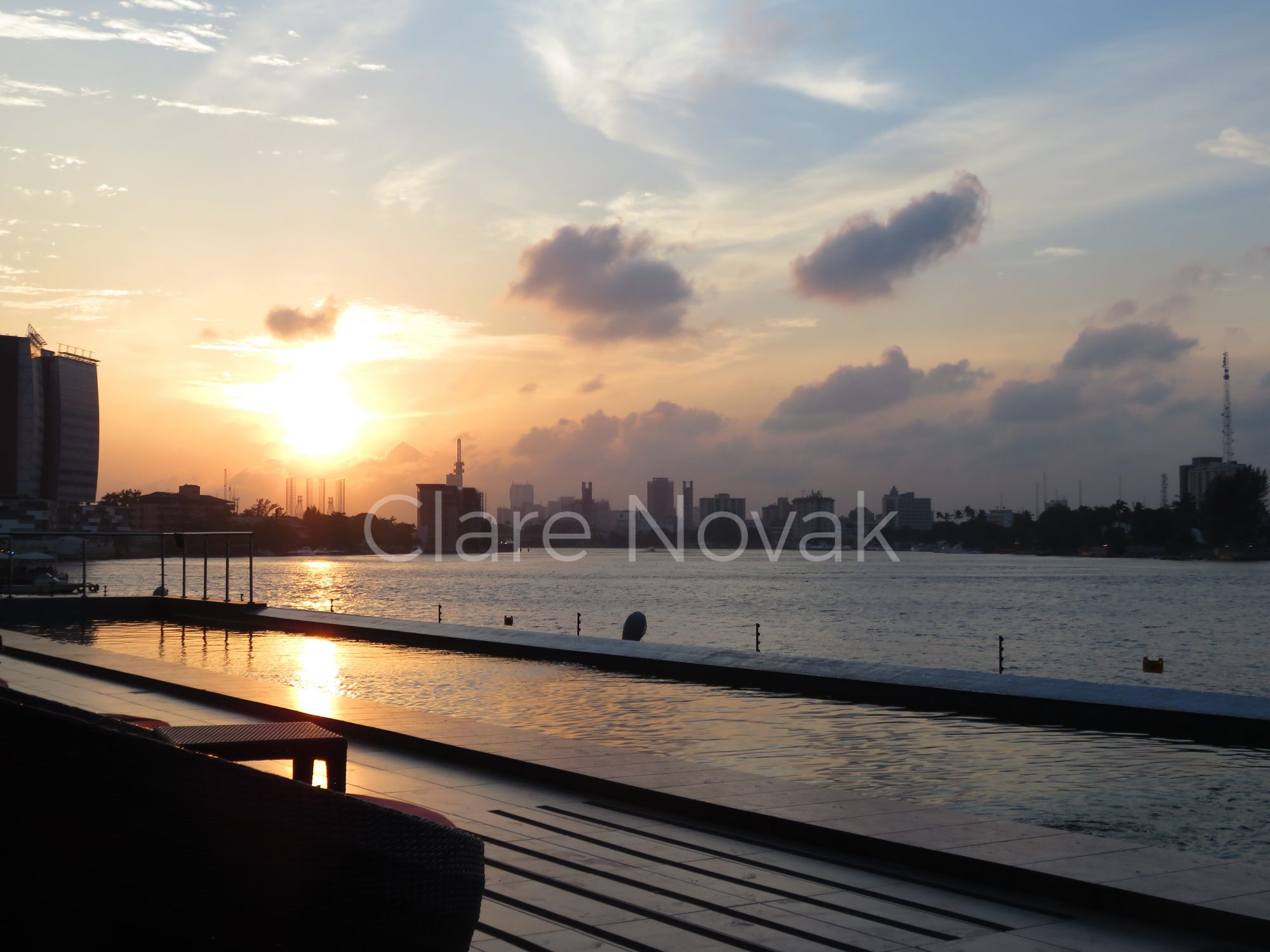 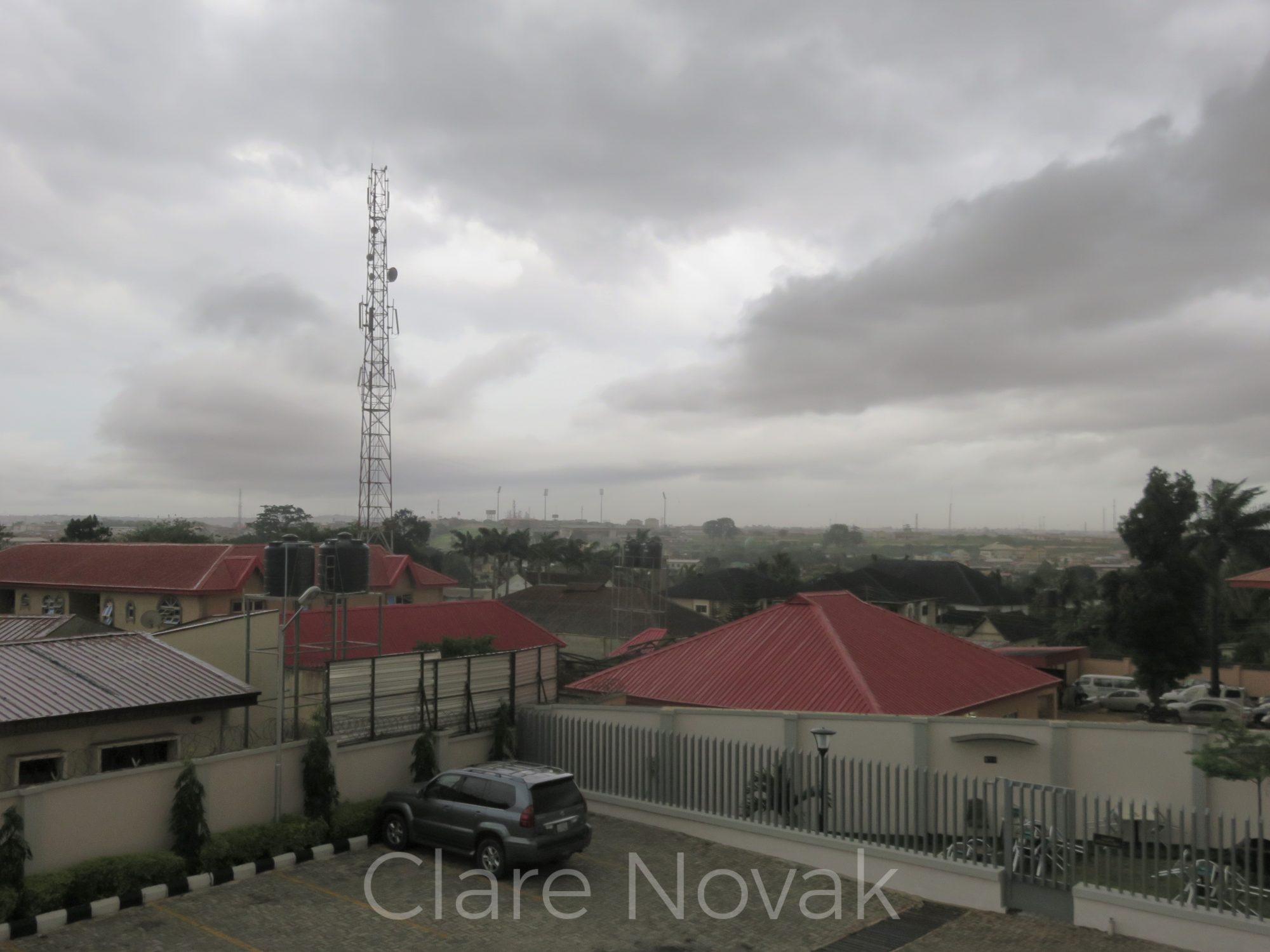 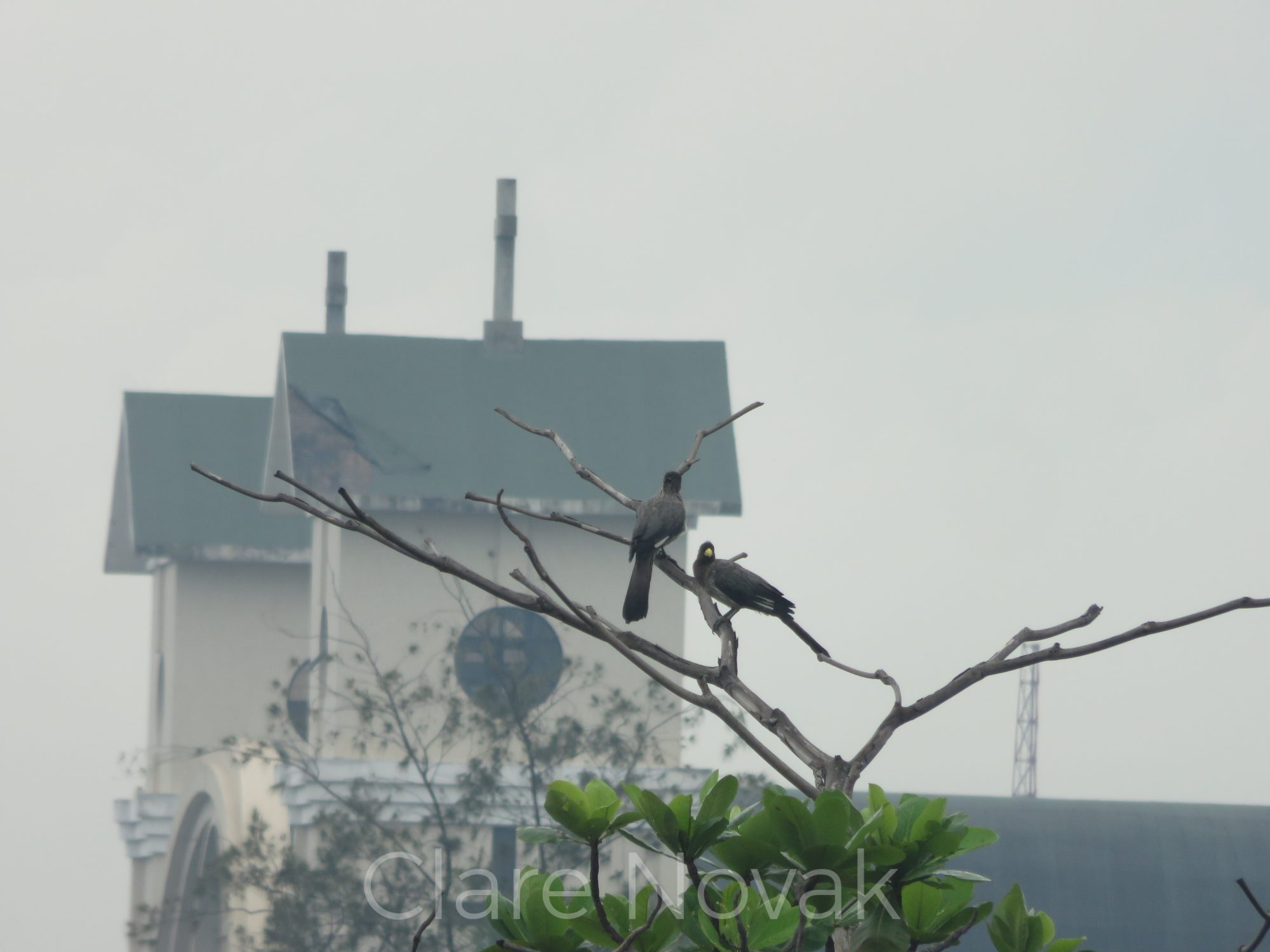 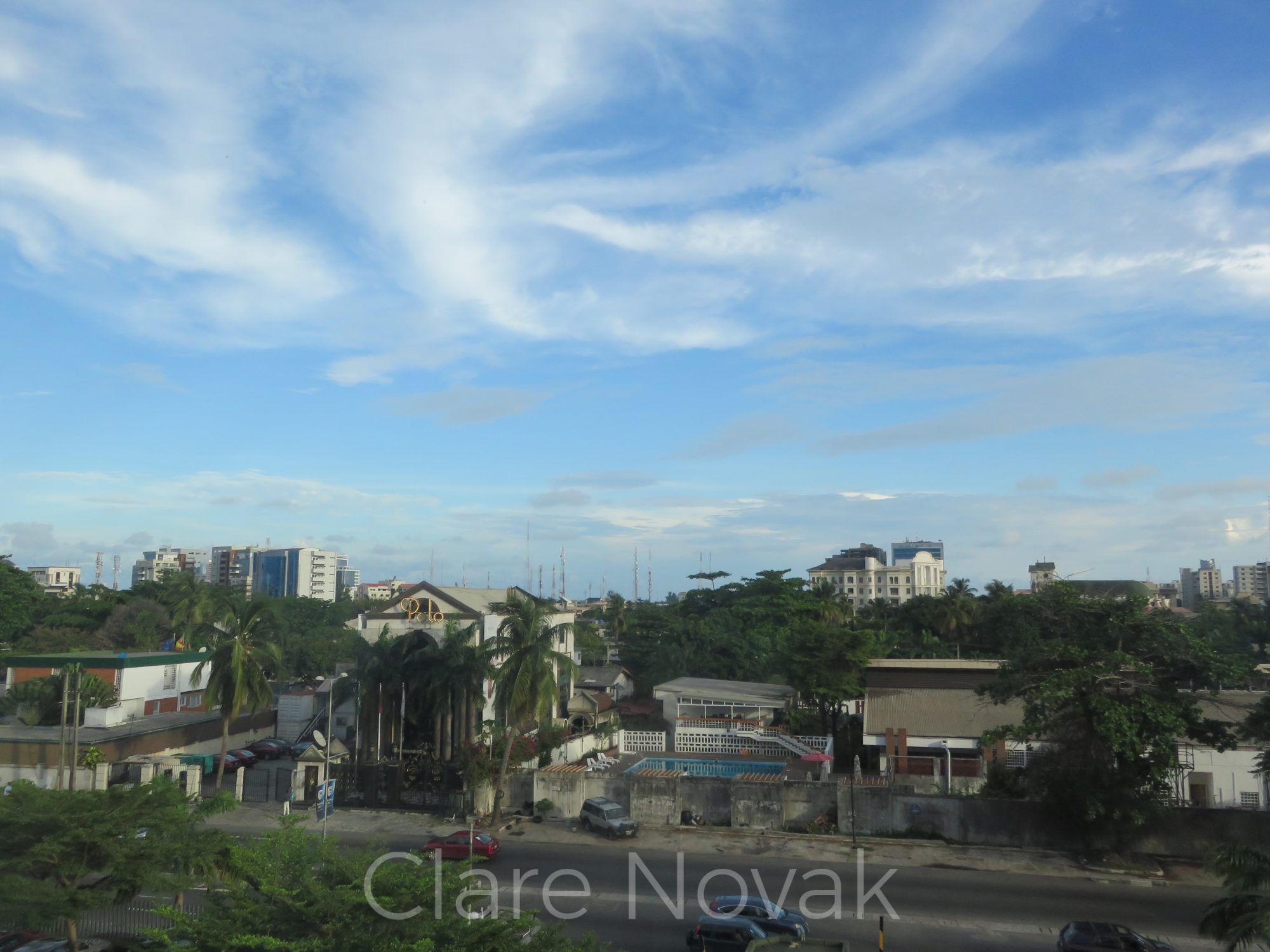 The occasional breezes are a welcome thing in the hot, thick air. Here along the waterway my wish is for Nigeria to gather itself. This could be a destination for the winter weary. It could be the Florida Gold Coast and it is not. These tiny oases of luxury hotels are not enough to tie together an attractive destination for the cash heavy.

Instead, the local wealthy and the business money listen to a band and celebrate Valentine’s Day. At least at this venue, Valentines seems more a family affair than a romantic one. Kids have been in abundance since breakfast this morning. The Nigerians are dressed to the nines. As I write that phrase, I realize I have no idea what it really means. Some of the colorful dresses are gorgeous and should one of my contacts offer to take me shopping, I may sneak out with her.

The men are divided between suits and ties and the much more practical lose cotton pants and tunic tops that to my eyes shout “pajamas.” The formal version is white with a bit of color for trim and sometimes a vibrant matching hat. The hat is a circle of reinforced fabric going around the head with a semicircle of loose fabric forming a half moon running from front to back. The purple and silver one I’m looking at seems more a crown than hat.

Given the level of dress in the restaurant area, I’ve chosen to park by the pool where my gym shorts and t-shirt fit in better. The weather here vindicates my choice of packing shorts. Kenya was too cool in the evenings. The sun block is probably superfluous as I don’t get out much during the day and don’t have any urge to be in the sun in this heat. The DEET on the other hand is a necessity. There is an ex-mosquito in my room.

Last night’s White Cap beer tasted fine but had the impact of a couple of Murees. Woke this morning to a blinding headache and was glad to have the morning to heal. When I finally meandered to brunch at 10:30, the only thing holding appeal was multi-grained bread with a dollop of Nutella. Coffee was good and went well with the chocolatey indulgence. So, this evening, as tempting as a cold beer is, it won’t be that one.

Today’s parade to Mushin District office was the first trip in Lagos beyond the fifteen-minute trip to HQ. The ladies and I were joking about what, to me, was an embarrassing level of security. The white pick up ahead with flashing lights carried an armed company guard and following us was the black SUV with my CPO. In all likelihood I would have been in less danger traveling unobtrusively with the ladies, sans the large flashing “important kidnapable person” retinue.

What I saw was what anyone might expect in a crowded city. Street hawkers, poverty and people just getting on how ever they may. Along the Lagos jetties were ships of every kind, fishing trawlers, oil tankers and my personal favorite, a small boat whose crew had set a laundry line from bow to wheel house and hung their delicates out to dry.

A second parade transported my retinue to the more distant Festac District. More of the city revealed more of the same although the Friday markets filled any available space and were crammed with about anything one might ever buy. Festac itself is more upscale that some of the districts and is home to many government retirees. What there might be to Nigeria outside Lagos, I will see on Sunday when I transfer to Ibadan. In the meantime, I’ve seen about all there is to see in the Radisson Blu.

It’s certainly an upscale property with a nice view but after a week it is in the end, a hotel. This is how, I suppose, many international workers learn how to drink regularly. One’s choices are the lobby bar, the deck bar or the restaurant bar if you care to sit anywhere but your room. Sure, soda is an option, but at the same price as beer, why bother? The menu has grown old especially for someone who doesn’t eat fish. Being near the sea, fish fills a large portion of the offerings.

That said, I’m staying here Saturday and saving the move to Ibadan for Sunday, as I simply don’t know what to expect there. The client didn’t like the hotel I was booked in, which is good to know, so she thoughtfully booked me at the company compound. I head off Sunday with no clue as to how I’ll eat, whether I’ll have internet, what my quarters will look like and whether I can leave them at all. I guess I’ve found my own new level of crazy.

To Ibadan
The Nigerian sky is persistently gray with haze and clouds, threatening to rain and not yet succeeding.  Proceeding north, the road is lined with industrial complexes in front of which are tin roofed shops selling all manner of goods. It is not until an hour out of Lagos that countryside appears. Flat yields to hilly and low scrub to palms and banana and yet manages to remain looking unkempt.

Ibadan is more appealing. It gives the impression of a more middle-class aspect than Lagos’ polarized wealth and poverty. The company building is more functional and more equitable, sharing air conditioning with all the workers rather than hoarding it in managers offices.

The company residence is an apartment with a sitting room and stocked kitchen. That’s very nice as is the TV programming that far exceeds the luxury Radisson. On the down side, no internet, however there will be a workaround by giving me a guest account at work.

Weird as it may sound, I prefer Ibadan to the luxury prison in Lagos. Most likely because there are things I want I can have when I want–iced tea, breakfast before business suit, a piece of fruit during the day and best of all no security retinue. Yes, it’s a gated compound and a driver is provided but that is more normal than an armed guard who didn’t seem to understand or remember any of the times I fixed.

I may change my mind about preferring this residence. Last night, in my quest for the bathroom, unfamiliar architecture got me. Just as I navigated the unnecessary two-inch drop from hall to bathroom, my foot caught on the four-inch tile and cement rim of the shower area, pitching me forward. Naturally I put my hand out to catch myself and in that closet-sized  bathroom, the wall was closer than my reflexes anticipated and I stoved two fingers. As soon as I determined they still bent properly at the joints I wrote it all off to an annoyance. Cursed be my Western feet.

We visited some offices today and the story emerging is that Nigeria is better than Pakistan though not by leaps and bounds. The biggest difference is that here people have a passion for the business, believing that they are contributing to the greater good. Hooray for them. Hooray also that they are getting themselves in hand to fix safety issues.  Given their spirit, I tried hard not to grimace when guys shook my injured right hand. Made ice cubes this evening and twice iced my injured fingers. I hope by Friday when I have to drag luggage around it will be much improved.

Here I am in Africa and have yet to try African food. This is not by design but by happenstance. Lunch here is take out Chinese. After the big, late lunch I don’t especially want dinner.

Thrilled to report to you that there is one benefit to traveling with Ebb–carpool access–woo Hooo!!! We were able to leave the hotel today and go to the Nike Art Gallery, the number one attraction in Lagos according to Trip Advisor. An art gallery as number one attraction lets you know how truly little there is to do in Lagos. At the same time, it is a wonderful gallery with four floors of original artwork, much of it quite original and beautiful.

The greatest work of art is Nike (pronounced Knee Kay) herself. Nike is a tall woman of advanced years who wears a close-cropped halo of gray curls and dresses in indigo caftans of her own design. She does not so much walk into a room as be flown in on a breeze. At 19, she became the first wife of man who eventually took 16 wives. After years of dying fabric, making art and handing over the money to him, she divorced. She found her way into an art program that took her to the States to learn the business side of art and opened her first gallery in her bedroom. She studied and learned and then opened her first proper gallery. As she grew, her second husband did not. She divorced him as well. Now, she owns three galleries, runs workshops to teach people the arts and create jobs for them. And more, she also creates “paintings” out of seed beads of many colors depicting the lives of African women. It is amazing to see a picture that is five feet across and in walking closer find that the colors are masses of beads.

Since our carpool perk got off to a good start, we went to the number two Trip Advisor attraction, a cafe. It is a funky, artsy place where a good glass of wine and a glass of lemonade are the same price! We tucked into grilled haloumi sandwiches on lovely baguettes. Haloumi is a cheese that tastes vaguely like feta but has a different consistency. When grilled, it retains its shape rather than liquefying. So good to be able to vary the menu from the limited, overpriced Radisson.

With only an afternoon to spare, and having been to the National Park, it seemed right to visit the Blixen…

Arrived Nairobi last night and all's well. At a different hotel this time and as you see it has lovely…