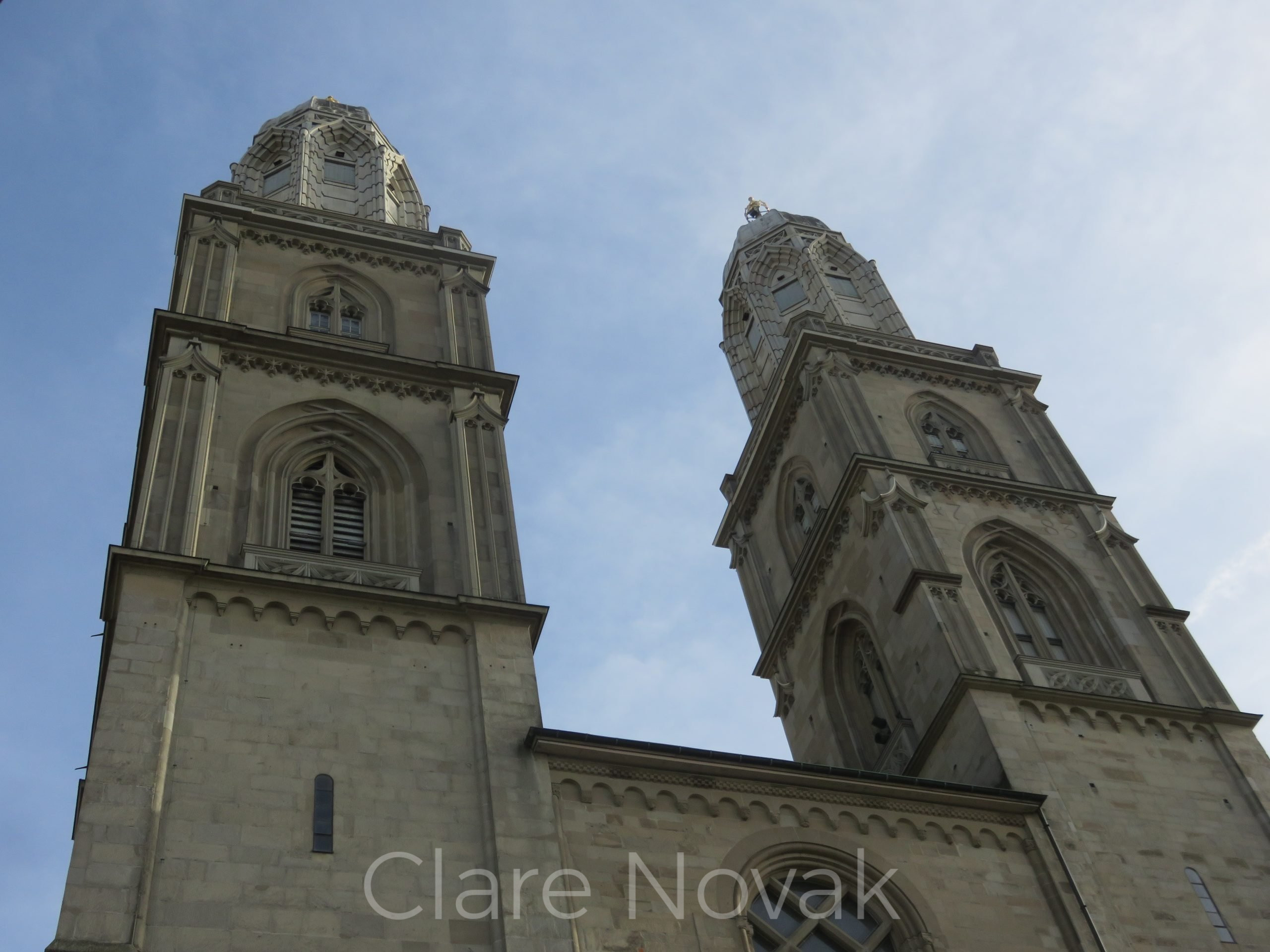 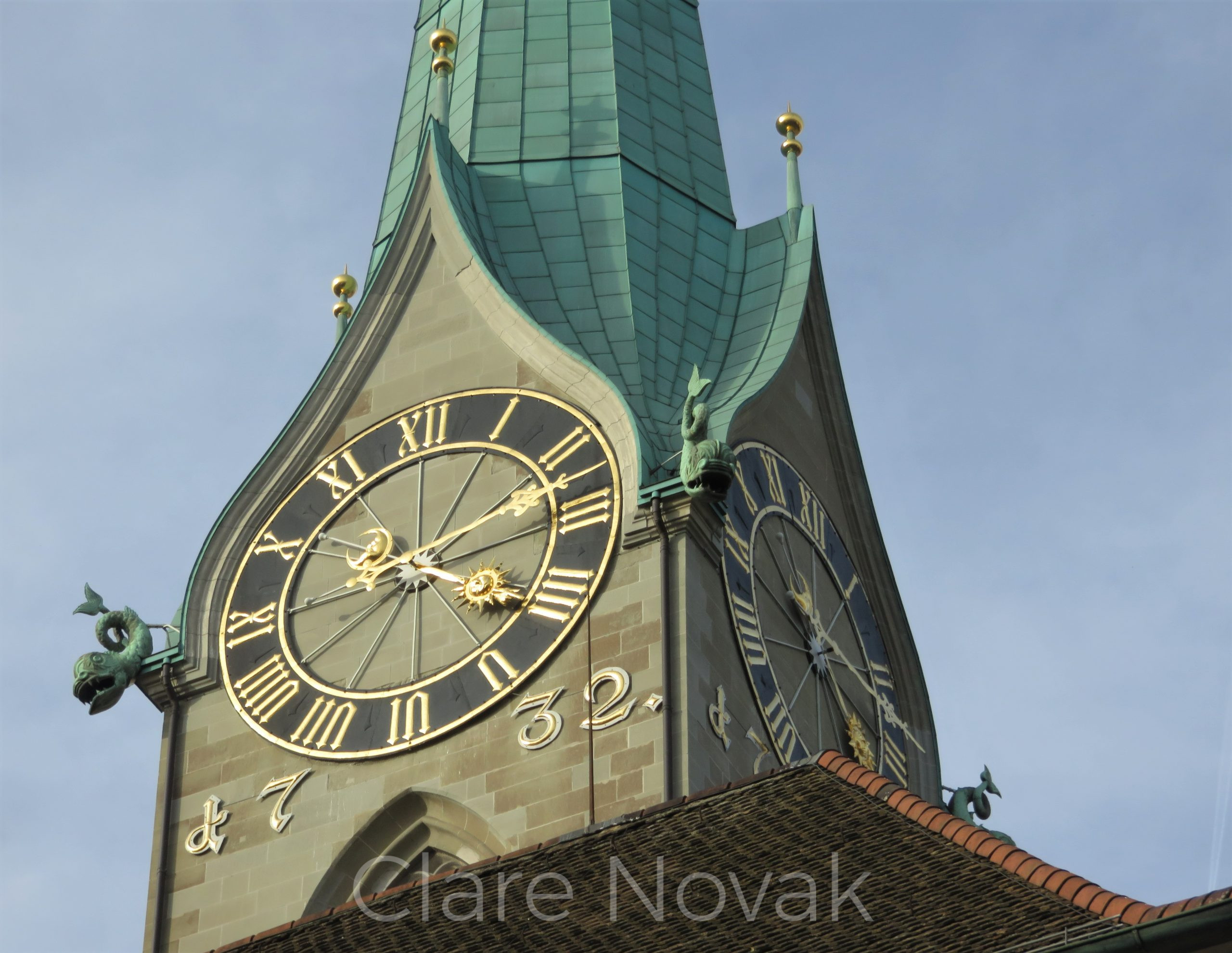 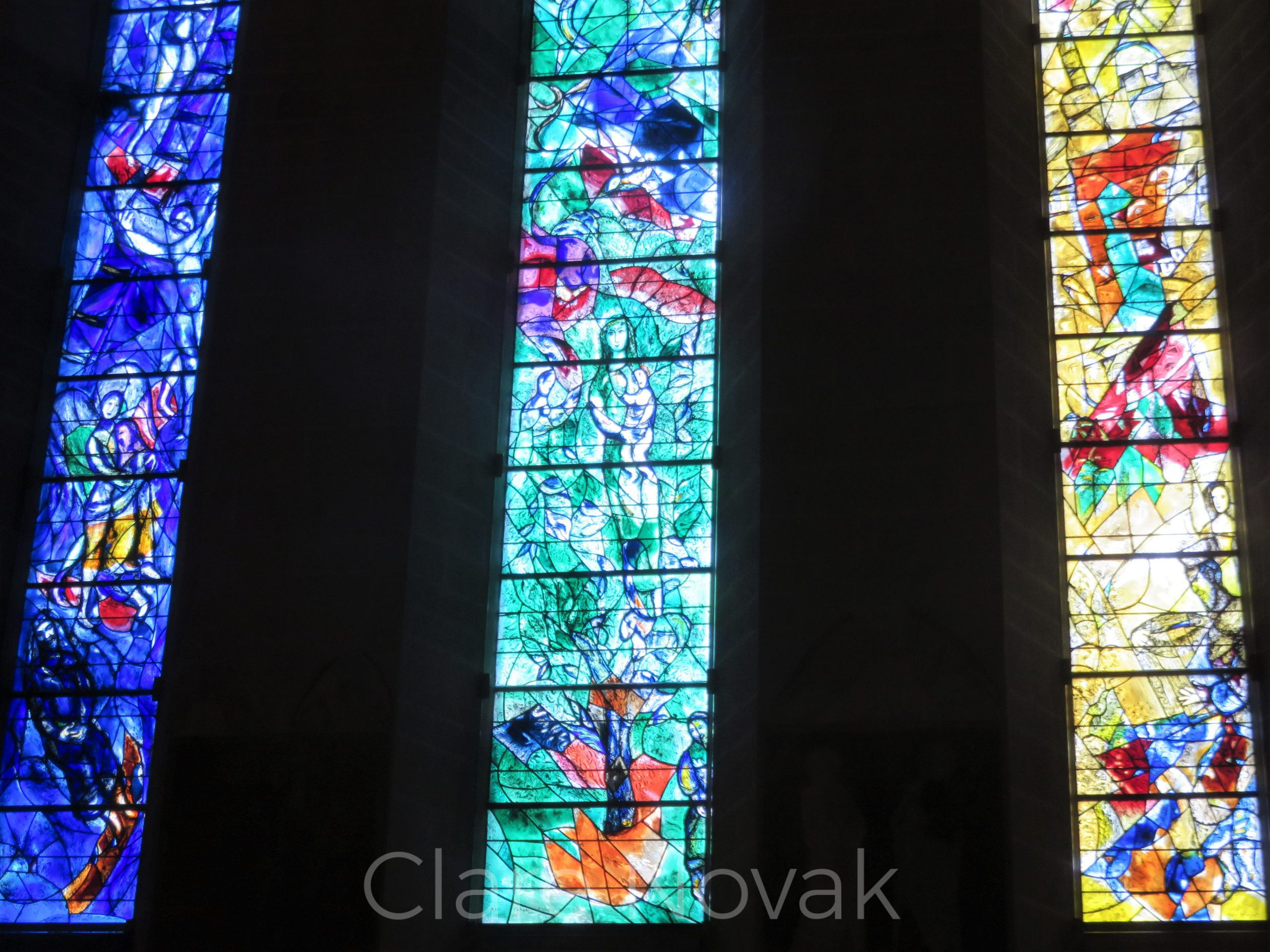 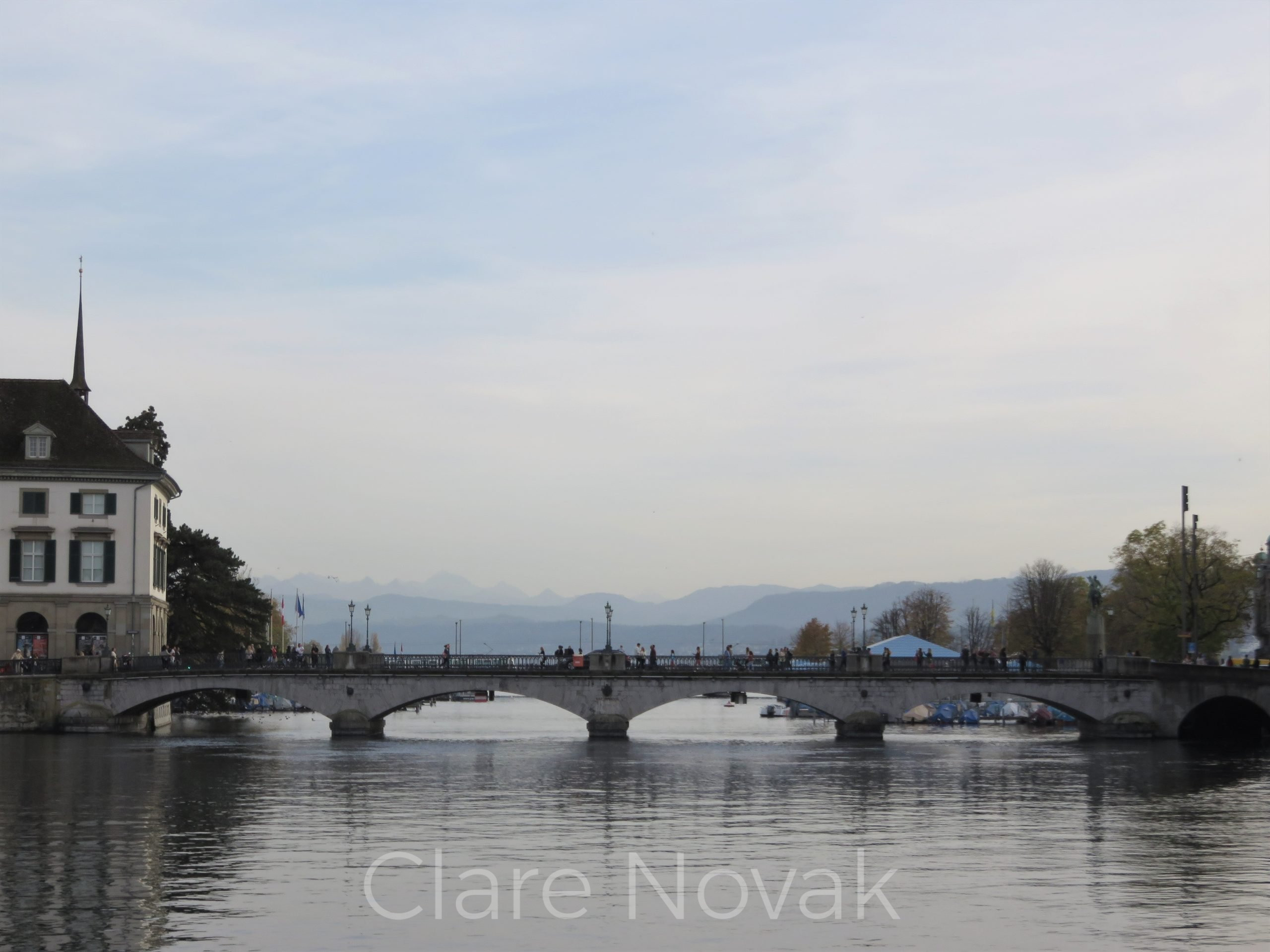 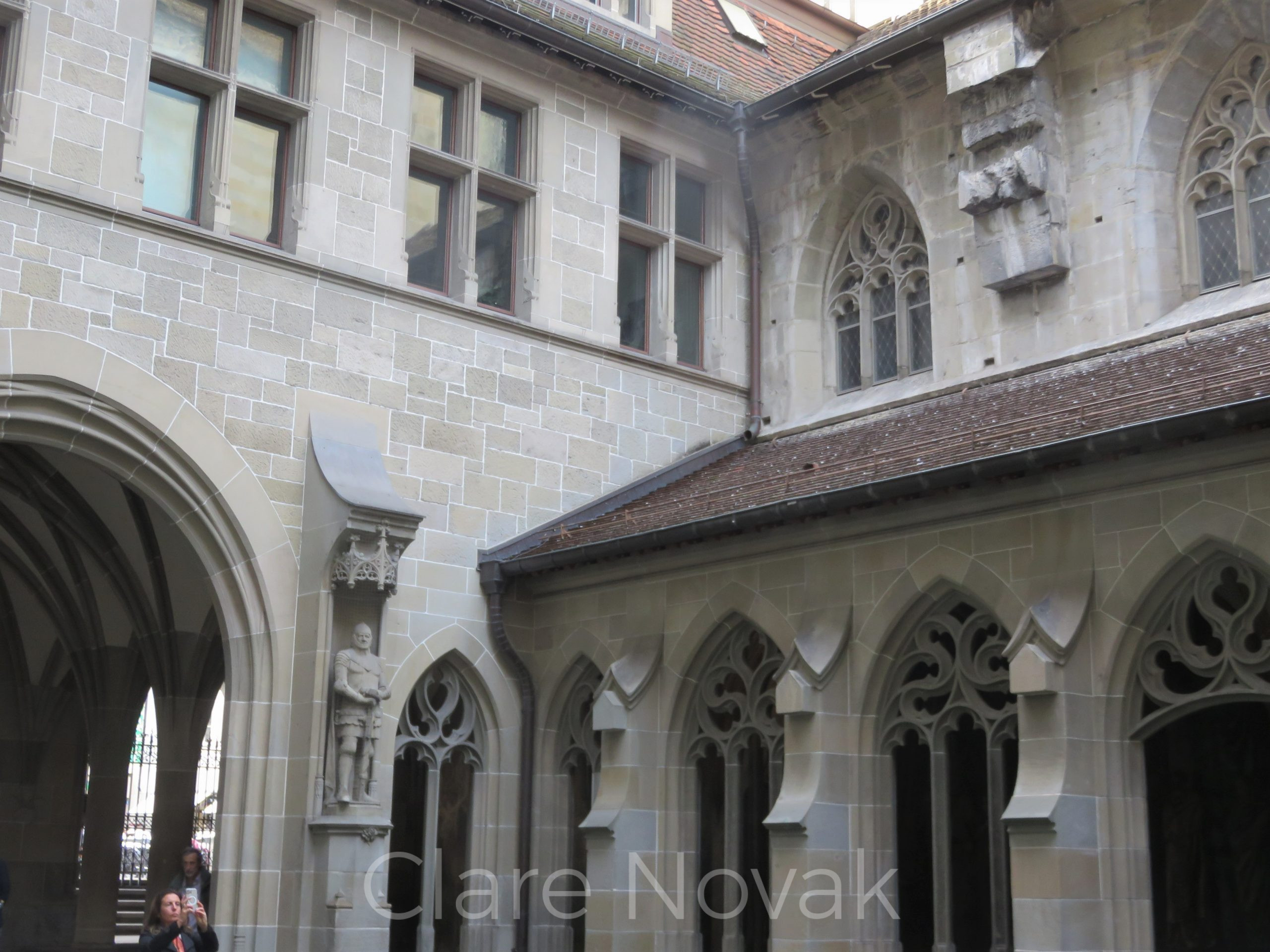 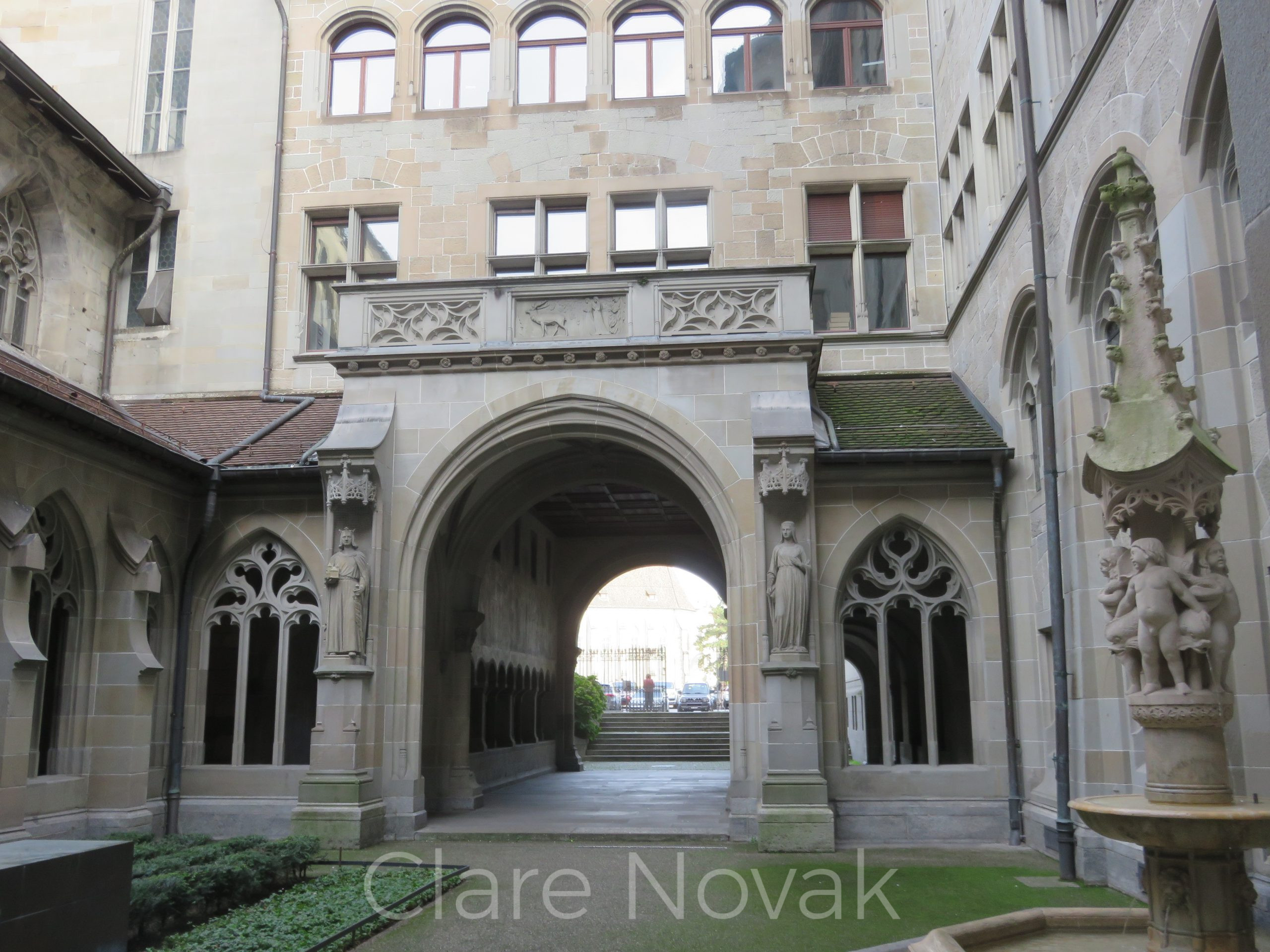 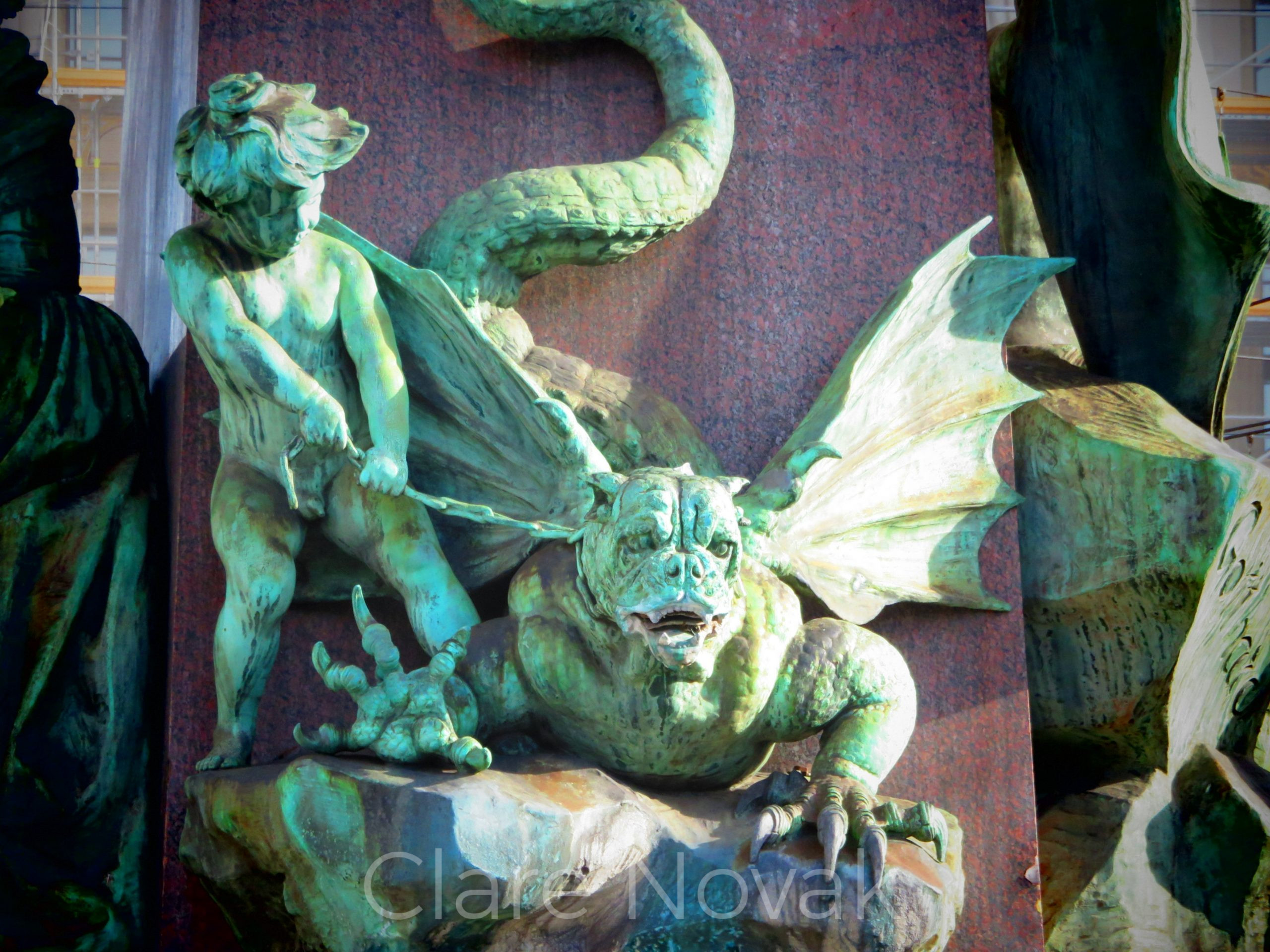 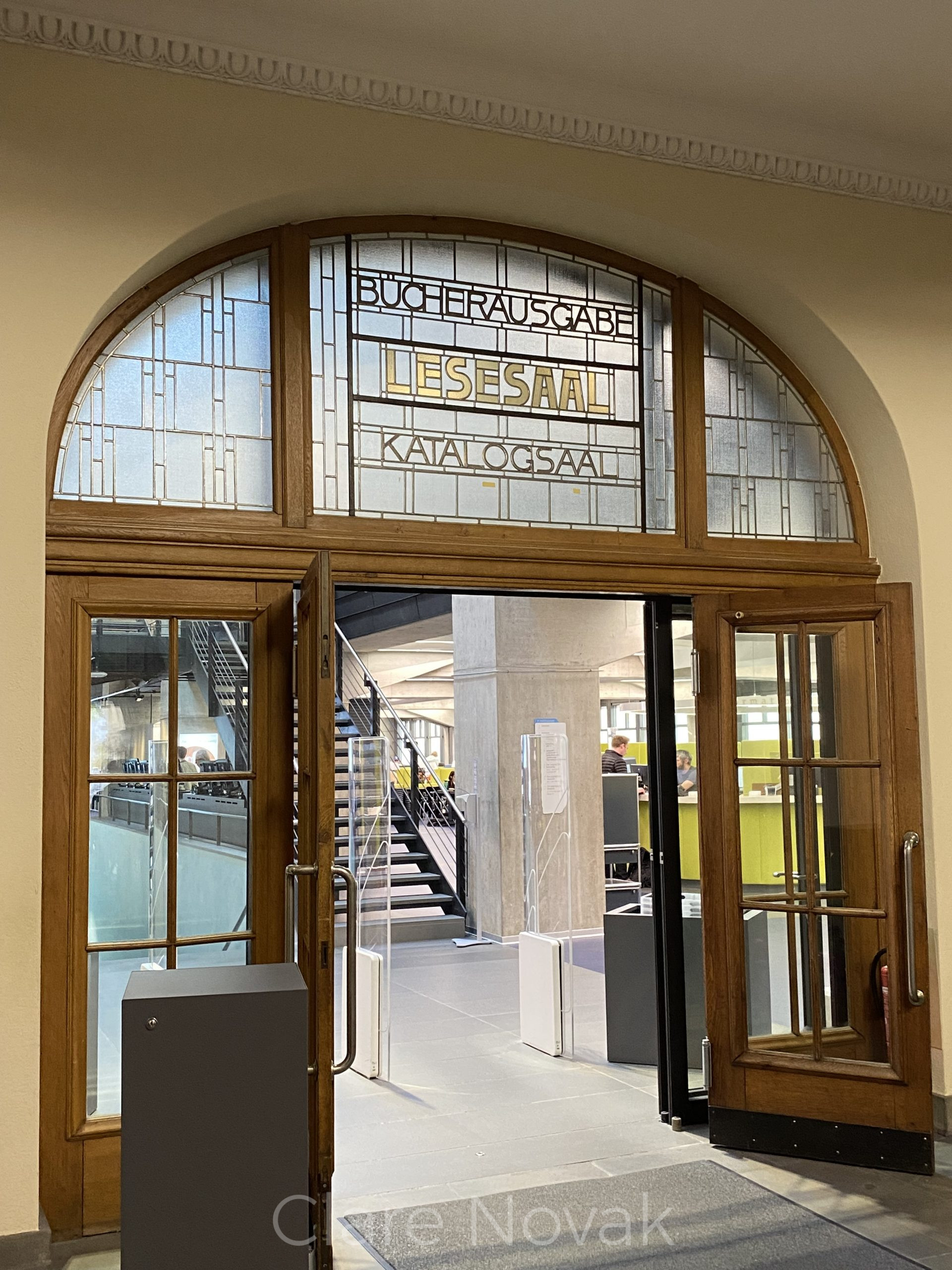 Given a choice of layovers, I chose Zurich. The timing from Sarajevo seemed right for spending an afternoon touring. As it turned out, the flight from Sarajevo was delayed and my time limited from mid-afternoon to evening. It was disappointing to have so little time and yet Zurich was delightful enough that I hope for a return trip.

The tram, across the street from my hotel, took me downtown to the Hauptbahnhoff (main train station). The station’s location made it an easy walk looping from one side of the river, across the bridge and back up to the train station. Exiting the train station, I immediately fell in love with the gargoyle statue, without needing any of its history.

Sunshine and warmth prompted me to simply wander. If some side street looked interesting, I walked it. Predigerkirche’s steeple drew me, though sadly in every way, it was closed for a funeral. This sadness was balanced by my inner bibliophile jumping up and down like an excited five-year-old because the main library was in that same square. The stained-glass window pronouncing the catalogue and check-out desk was a delight.

Eventually meandering across the river, Fraumünster which started life as a convent in 853 drew me in. The Benedictine nuns ran the city, minting coin, collecting taxes, overseeing shipping and holding markets. By all accounts Zurich flourished under the abbess’ oversight. The Reformation ended women’s power in 1524 and Swiss women did not recoup even the right to vote until 1971. If that theoretical dinner party of anyone from history could ever happen, I’d invite a Fraumünster Abbess, Hildegard, Bertha, Kunigunde, Regelinda, Uta, Ermentrudis, and most certainly the last Katharina von Zimmern. Her story of handing over the abbey and all its goods to the men who commandeered the city, allegedly by God’s will, would be a story worthy of the time.

Today, those sisters fill a courtyard wall in a peaceful place of contemplation. Inside the many times modernized church, Chagall stained-glass windows are a tourist magnet. These five windows are gloriously bright and support Picasso’s observation that Chagall “must have an angel in his head.” Indeed.

St. Peter’s Church had unfortunately closed for the day by the time I arrived. Although it was early, my feet and mind conspired with my stomach to seek an early dinner. When in Switzerland, one has cheese. Raclette Stube, with outdoor seating, was a wonderful option. The smoked gouda raclette was easily the best gouda I ever had. Amply satisfied, it was time to head back to the Hauptbahnhoff, buy chocolate in a shop there and catch the tram back to the hotel.

Well that was all a bit strange. Couldn’t quite figure out how I felt about Rome. The first two days,…

Matka, Macedonia November 2016 I'm somewhere heading somewhere else as near as I can figure. Where I am is foggy…