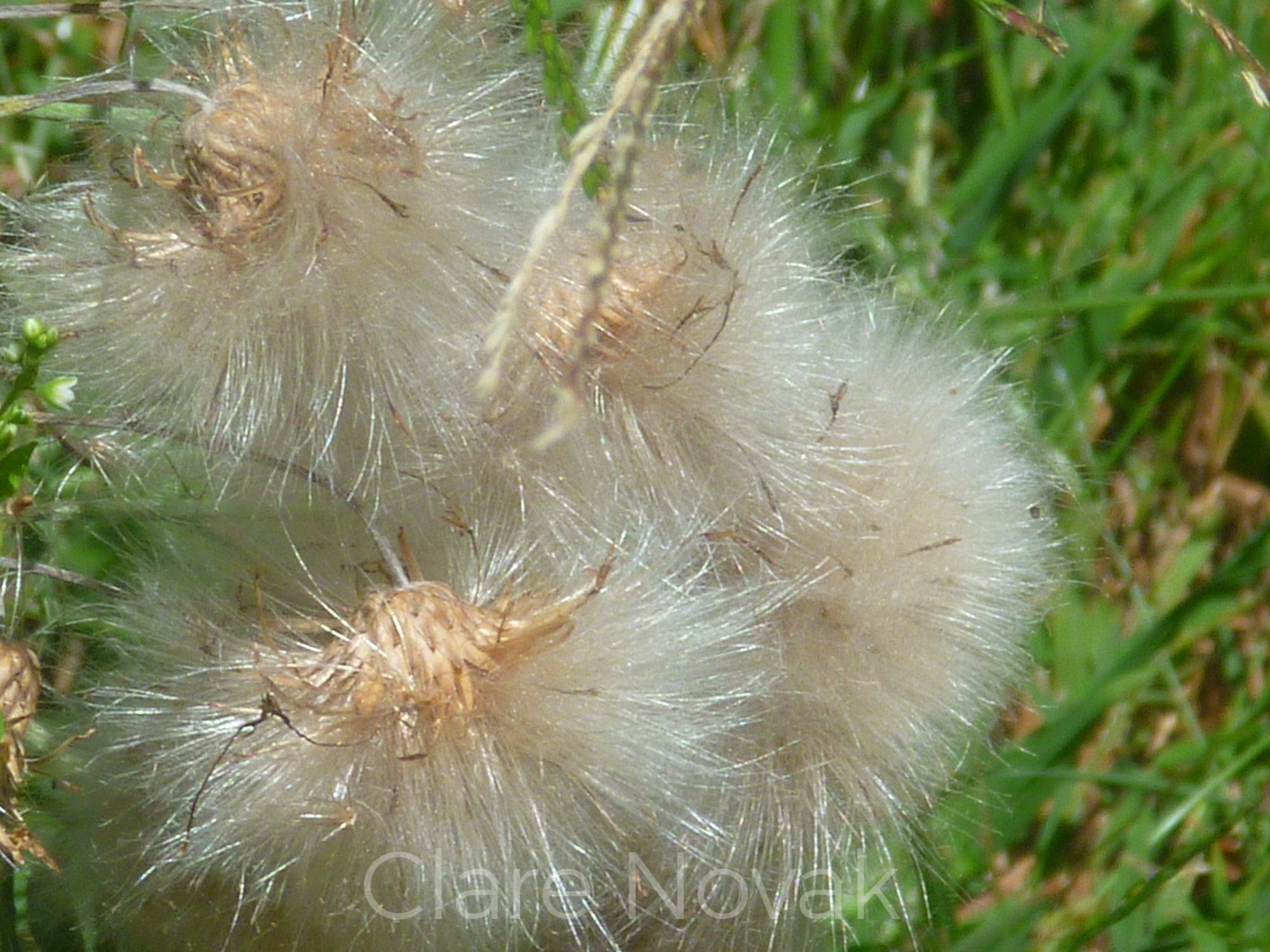 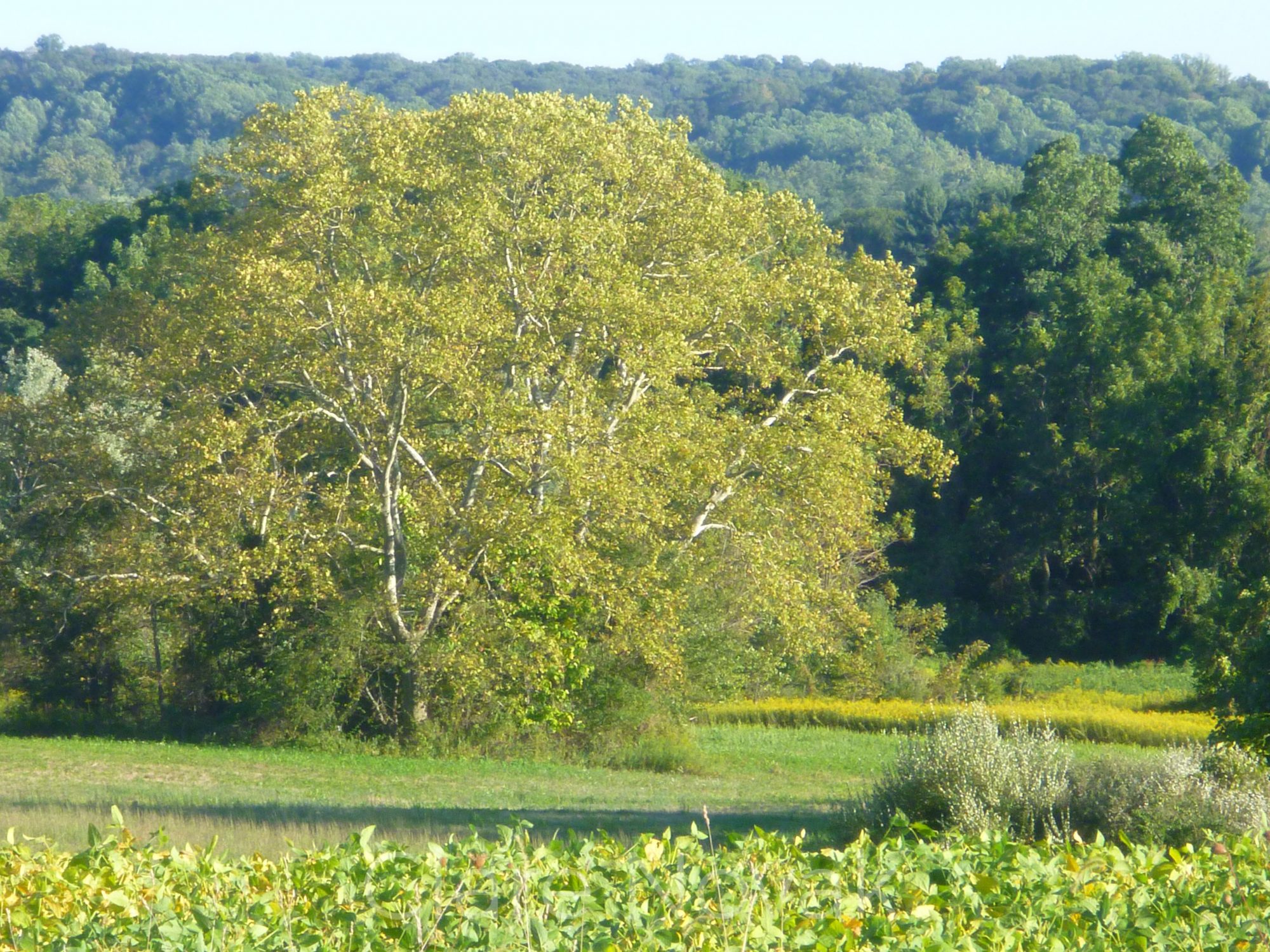 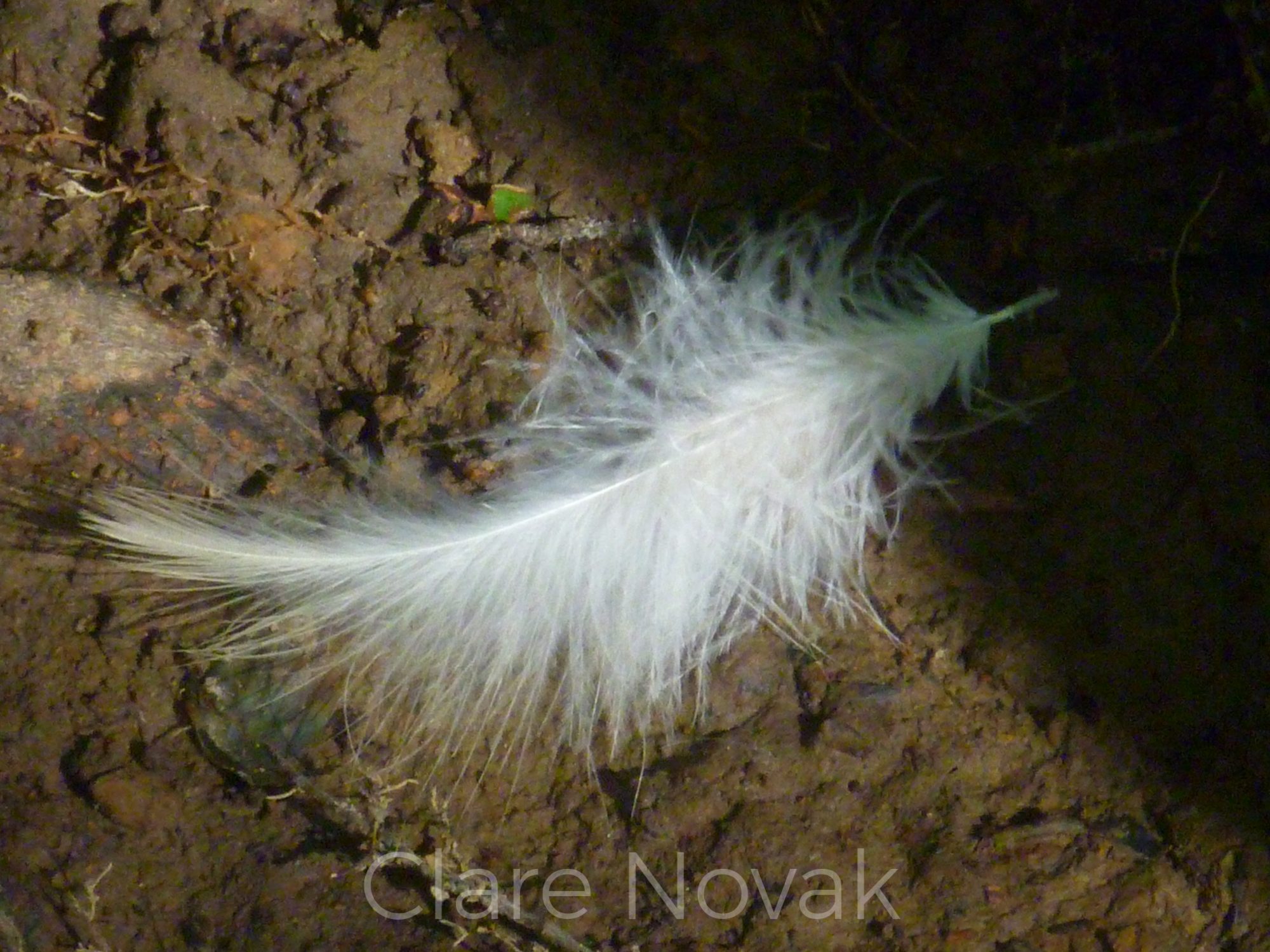 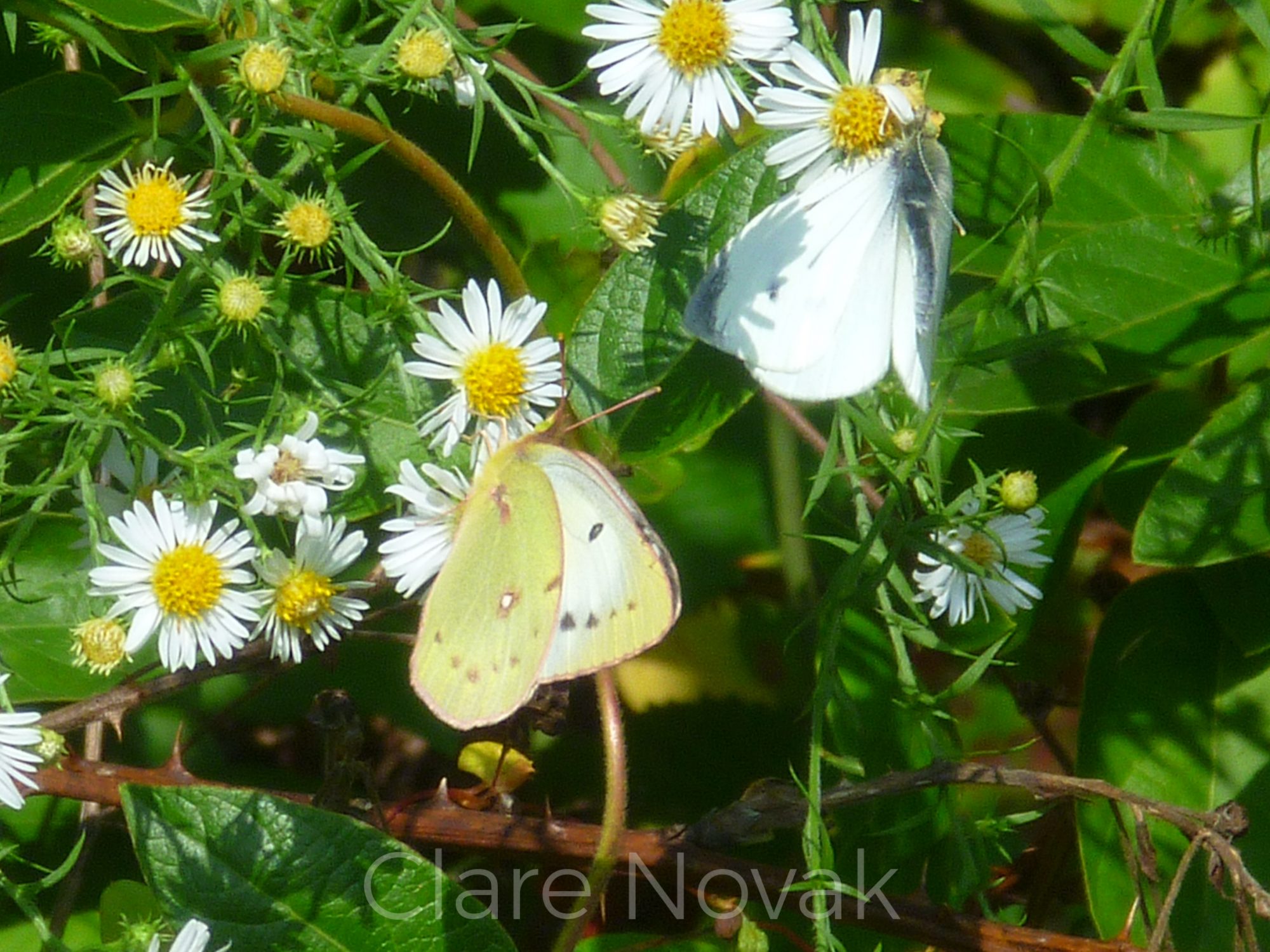 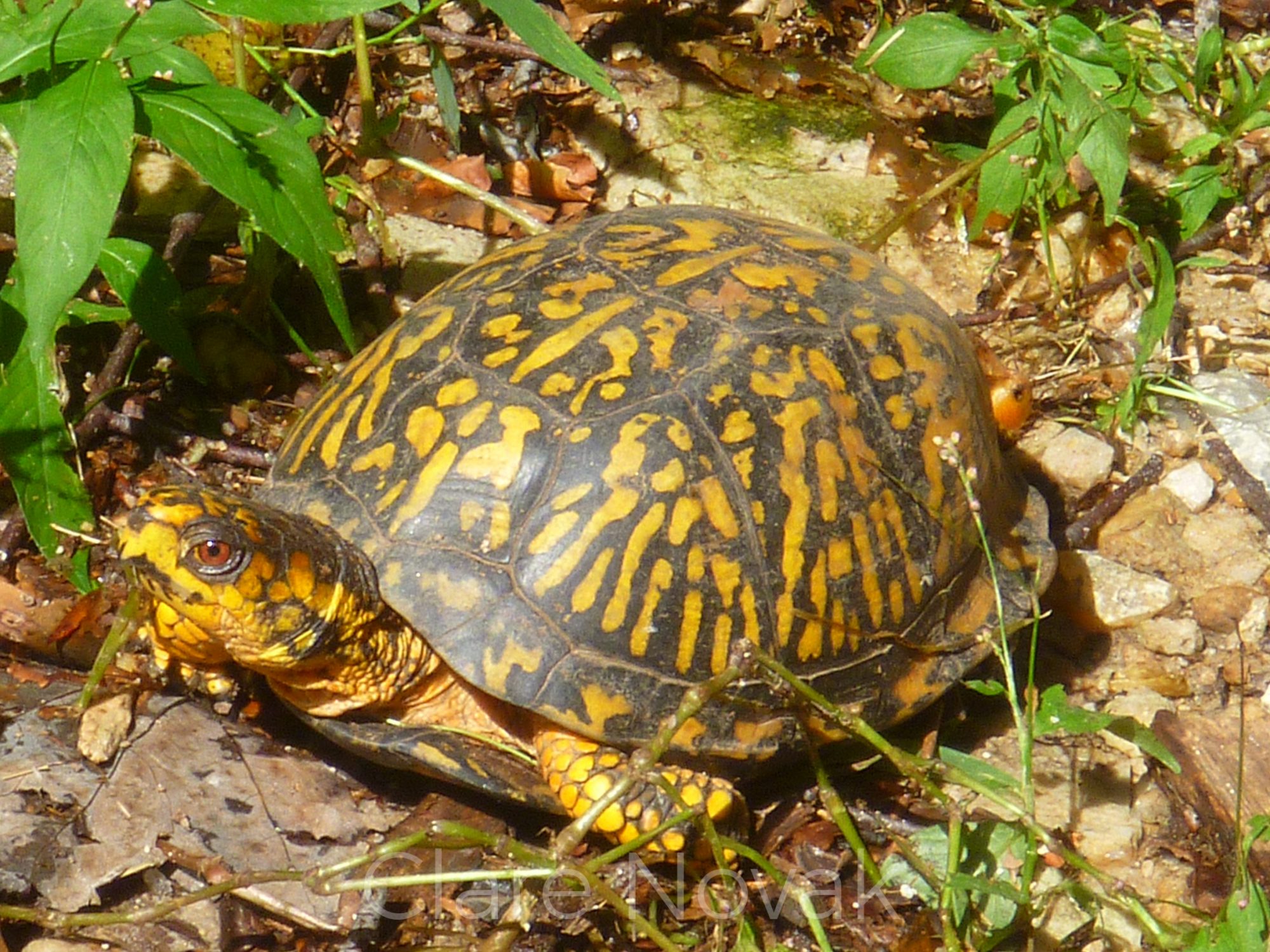 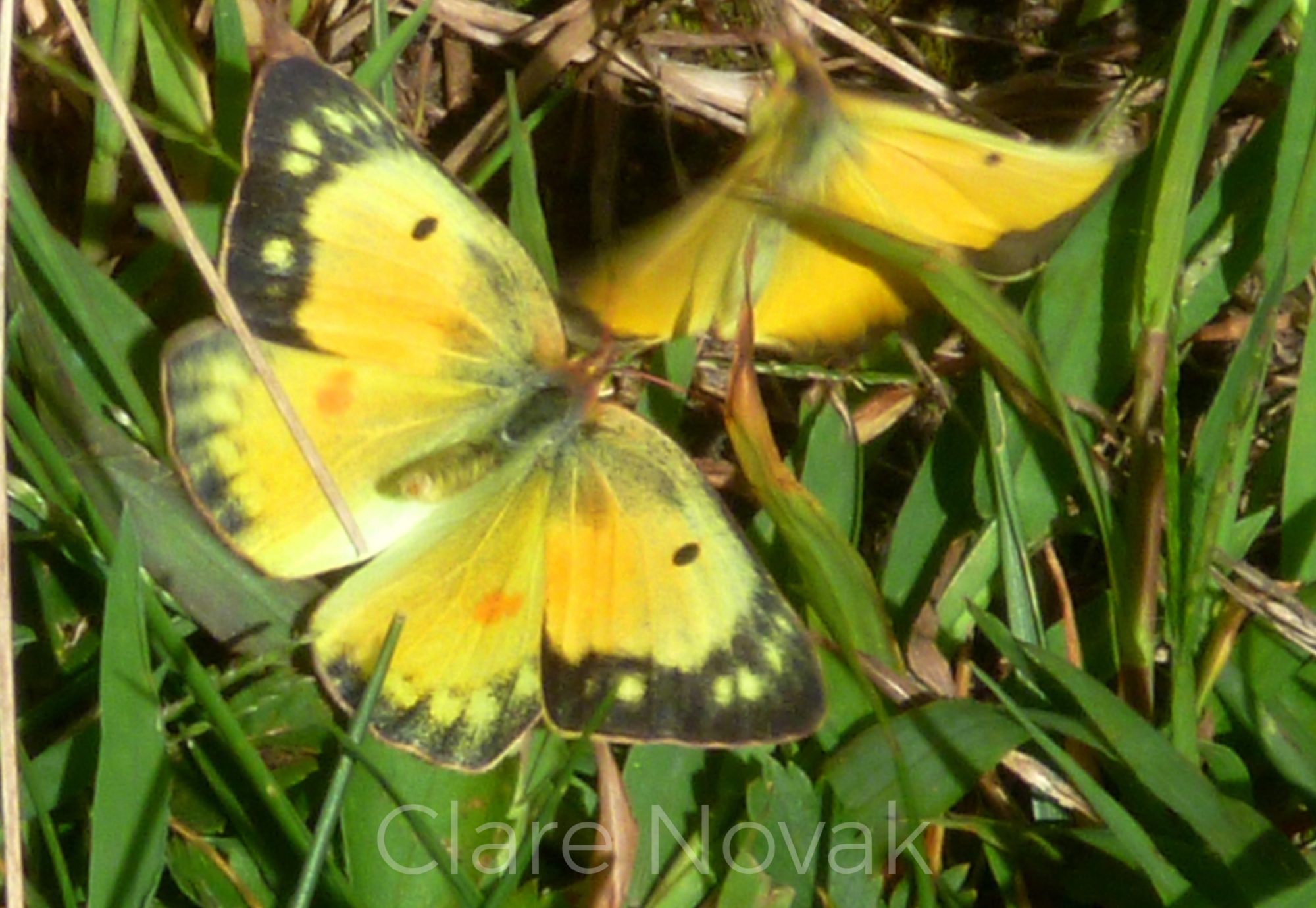 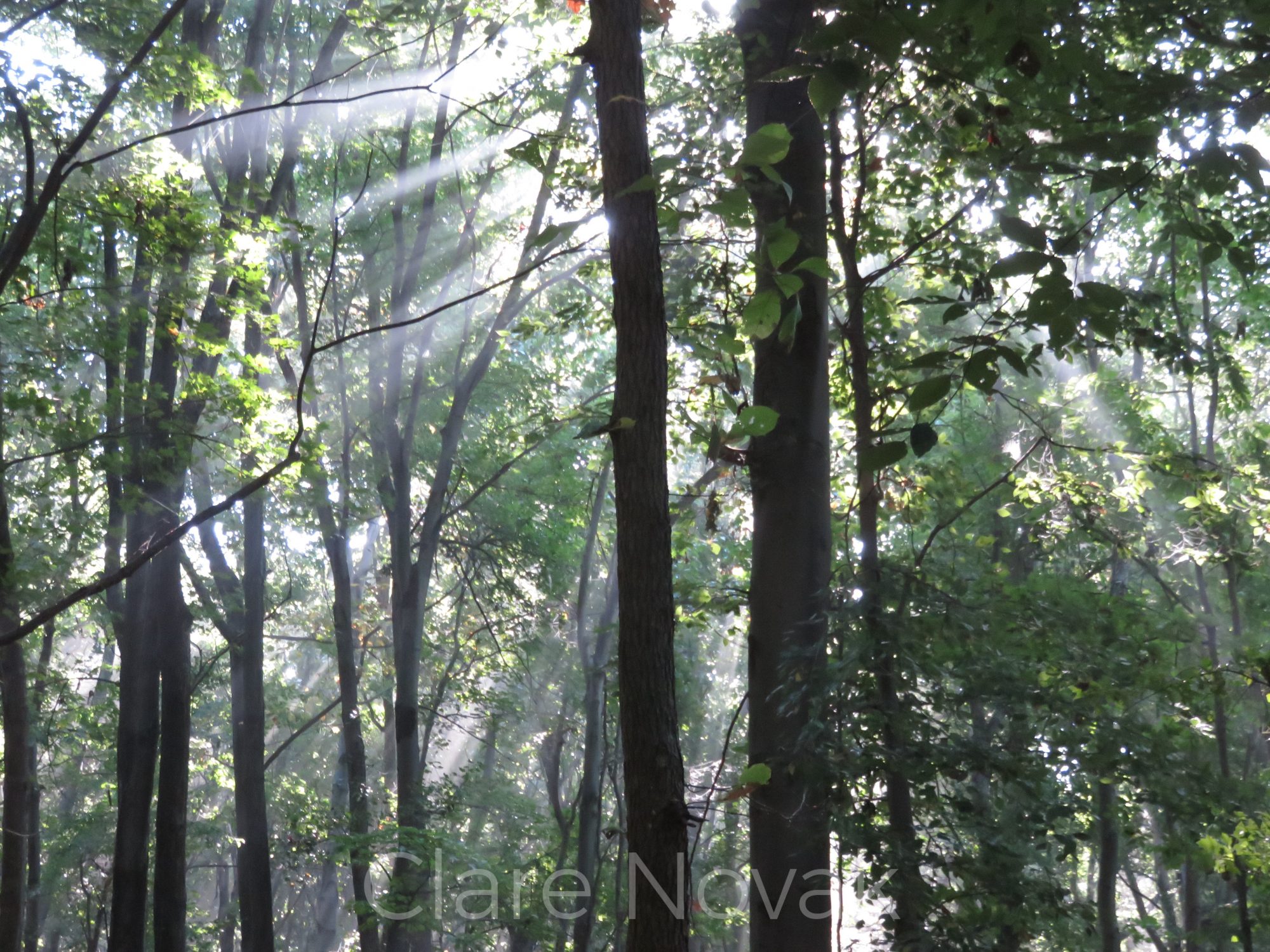 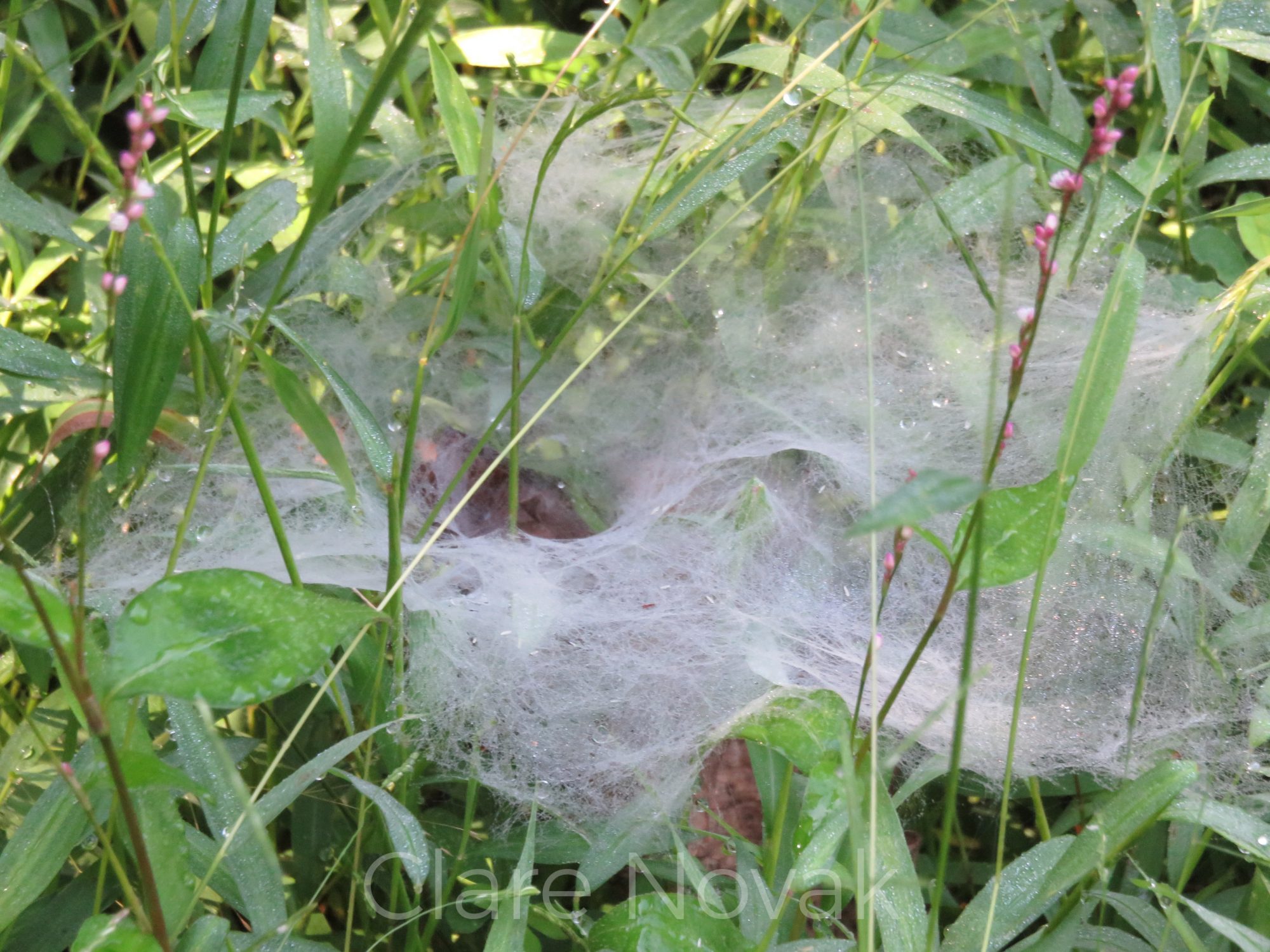 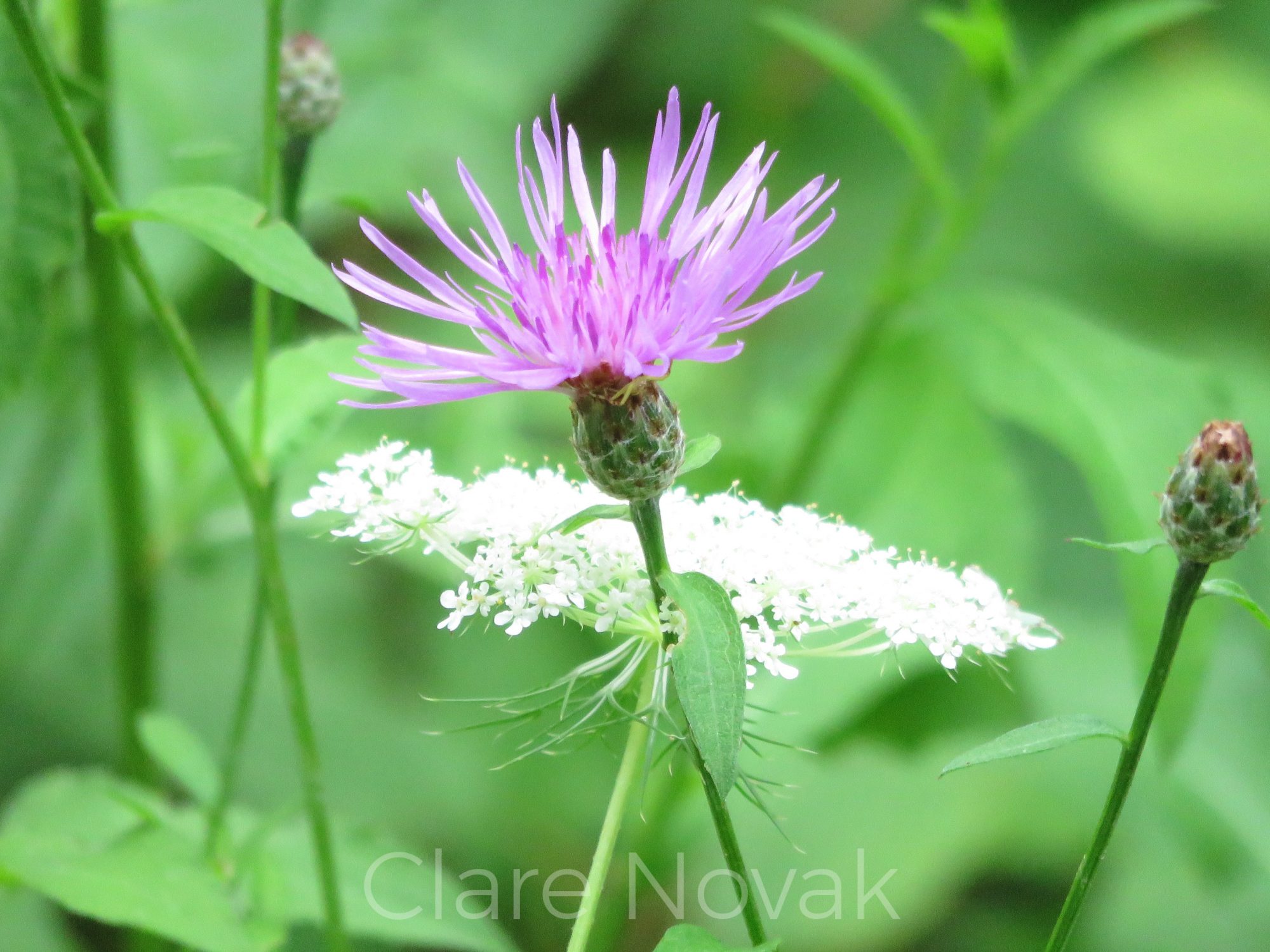 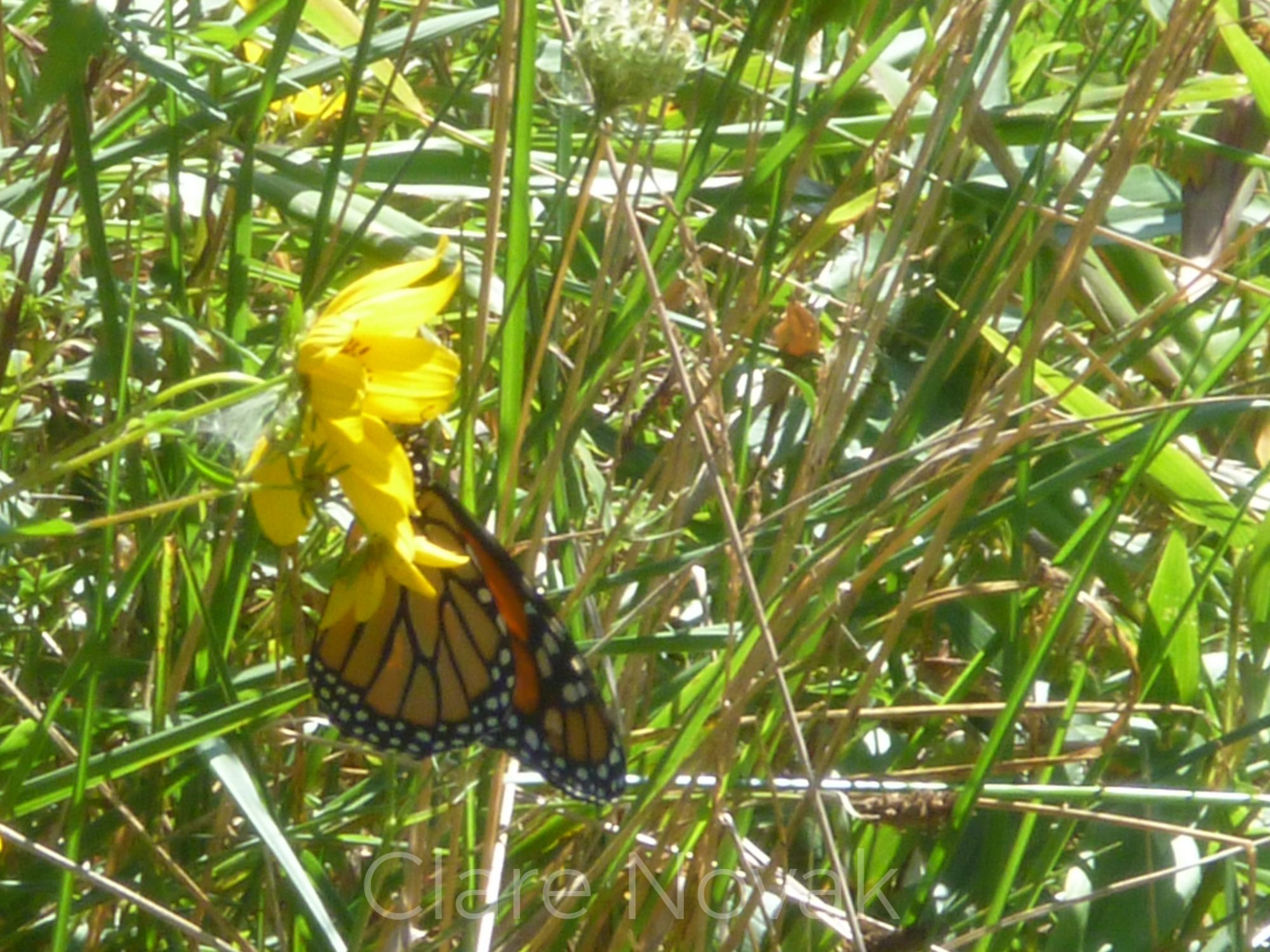 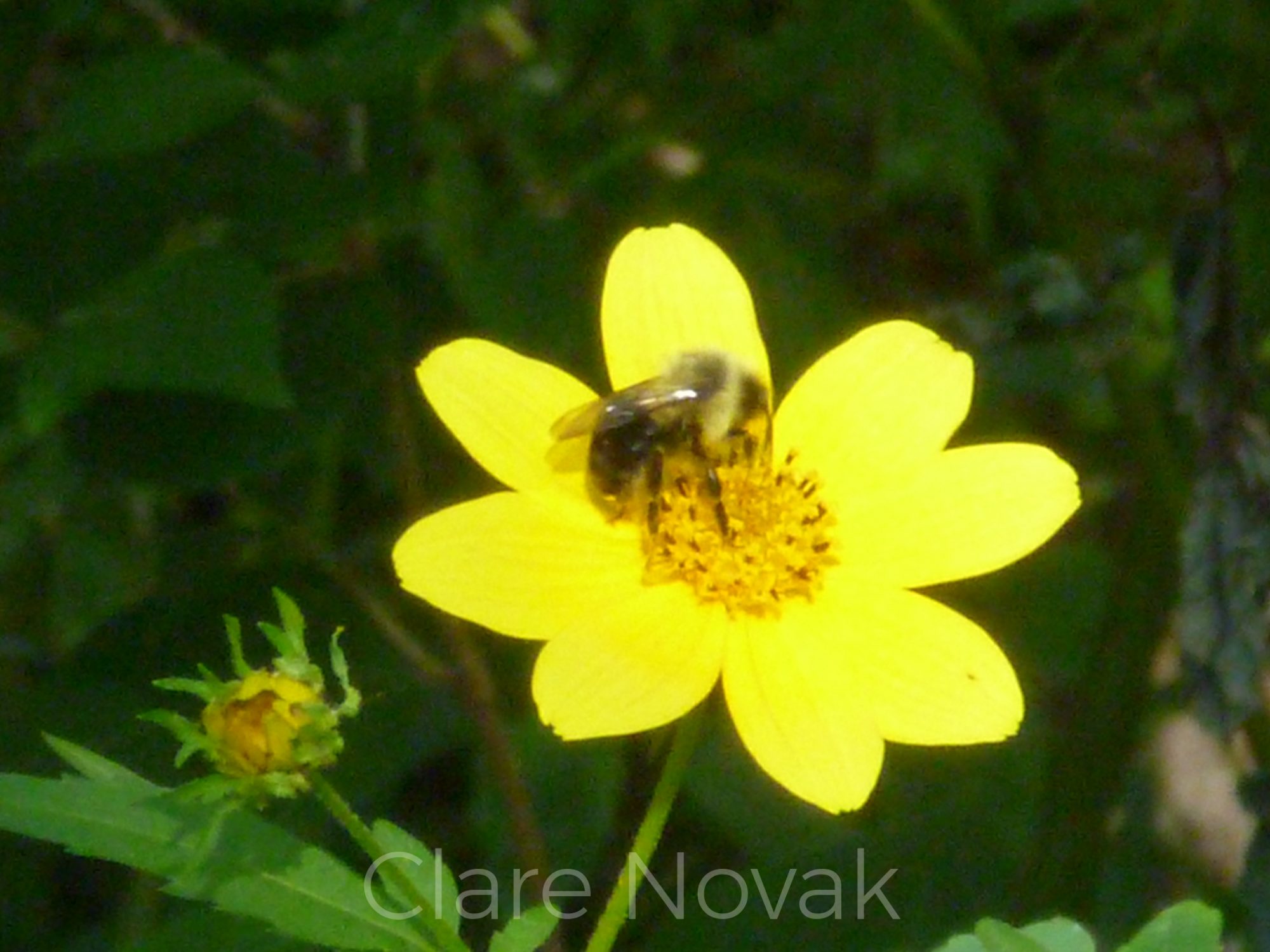 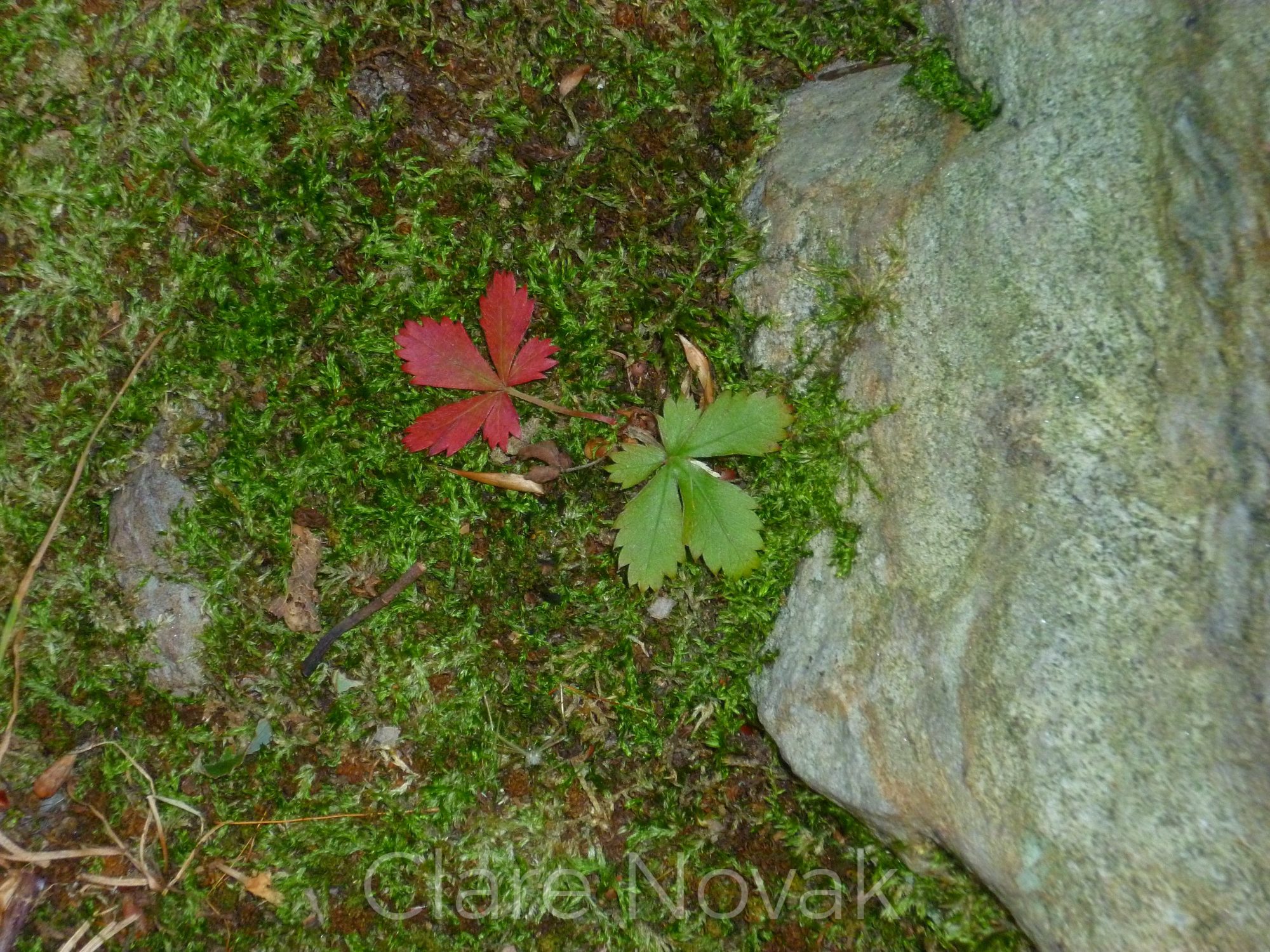 It’s the second day in a row I walk the woods. It is different from the day before. What would I see today? Categories of things, rocks, birds, abundance, tenacity, death, decay, refocused my photographer’s eye. In moving toward larger themes I suddenly felt purpose. I would see something different today. Indeed, I did.

A small blue butterfly and I matched wits to wings. Neither of us won. Butterfly captured in photo though not perfectly. Slightly blurred by a breeze or the unsteadiness of my hand, I know not which, the butterfly and I declared a draw.  With a quicker hand and lucky break, a small brown and orange butterfly and I shared a split second’s recognition before we went our ways.

The woods are dry, terribly dry. The streams, save one, are dusty ruts. As I approached the running stream, I heard the plop of frogs diving for cover in the water. Many times before, tried as I might, I’d never actually seen one. Today though, I heard a plop and froze where I stood and looked, carefully. There it was, a frog. Slowly and silently, I brought the camera up to my eye and zoomed in closer, closer, there. Gotcha! And still enamored of my new toy, snapped it in “natural,” “vivid,” “warm,” and “cool.” At which point Mr. Froggy got bored with posing and left.

The jaw bones surprised me. I could have sworn they were not there the day before. But old, bleached bones do not suddenly appear neatly on a trail. No carrion eater would have cause to drag them out. No dog would have left them so neat. Either they had been there or a human had placed them so.

Photographs are their own reality. In spite of all the skills one might bring, the best photo may be one that makes itself. Shoot hundreds and the after thought, the one you thought would be the ugly step sister takes your breath away. With the thought of capturing the first hint of fall, I focused my lens on a single, red leaf of woodbine beside a green sister leaf. As an afterthought, I focused on a single green leaf near an outcrop of quartz. The afterthought took my breath away. The quartz glows; the moss is perfectly green and the composition flows. Thank you, Cinderella.

My woods were not mine today. They were overpopulated with a gaggle of teenage boys and dog walkers who rarely venture off the farm lane but today decided to walk in the woods. Reflection is difficult when interrupted by teenage whining.

And yet, I did reflect. It’s not possible to be a US citizen and refrain from reflecting on 9/11. Today was the same kind of perfect September day that that 9/11 was. Clear blue skies, thin cirrus clouds and warm dry air. Today, however, planes flew all day. Noise and contrails marked the difference. Perhaps the woods were crowded because people realized they were still alive and could get out and walk on 9/11.

This was not the peaceful “church walk” today. Elizabeth called to let me know she’d have to call the prison everyday to see when her son was brought in. The police could not tell her if they’d arrested him, as he’s an adult—mother or no, she’d have to just keep checking. What a lousy place to be. She asked me to let her know if he contacted me and at the same time we agreed that it was unlikely he would. A pater noster to you Elizabeth.

Even with all of that, I did stop for more butterfly photo attempts and was rewarded to find a particular butterfly I hadn’t seen before. Just as I stood up in triumph from capturing the butterfly, and flicked the camera to off, a hawk flew across my path. Mother nature has a wicked sense of humor.

The other good shot of the day was a seeding plant with fluff much like milkweed or dandelion but was neither. To satisfy my own curiosity, I will need to find out what these children of nature are that I so love to capture.

It was after 3 before I could make it into the woods. What struck me was the deep afternoon shadows that fall in the valley. There was a sense that I should hurry to leave before dark even though dark was many hours away. Knowing the clock time made no difference.  Primal shadows pushed hard. Go now; get out before dark.

Deer easily eluded the shots I tried to take. No matter what side of the gully I trudged through they were on the other. Butterflies were easier game and a bunny the easiest of all.

Until a deep rain, there will be no fall mushrooms to speak of. Those few tenacious specimens hanging on for dear life were desiccated and drawn. It make take the remnants of a hurricane to slake the drought though none have yet made it inland.

It’s good the woods remain a place of calm and peace as the world, my immediate world becomes the jagged colors of irritation. My home territory invaded by an f-bomber next door has become a prison where it was once a haven. Working on the back deck used to be a perfect setting. Now, it’s down wind of cigarettes and recriminations, drunks and arguments.

Acorns announce themselves. They crunch loudly underfoot. They crack when they fall from forty feet. They hurt when they land on your head. The first time I was standing still to take a photo when an acorn cracked me on the head. It hurt, but I thought to myself, “Huh, what are the odds of an acorn hitting you on the back of the head?”  When it happened again a couple days later as I was walking, I thought, “Ah come on, that’s just mean.”

The woods were still dry. For some time the one running stream managed only a lethargic meander downhill. Brush crackled underfoot and my passage was a noisy announcement to any wildlife I attempted to photograph so I didn’t really linger but decided to go home, have lunch and go to Marsh Creek for a while. It was simply too nice a day to be in for even a minute.